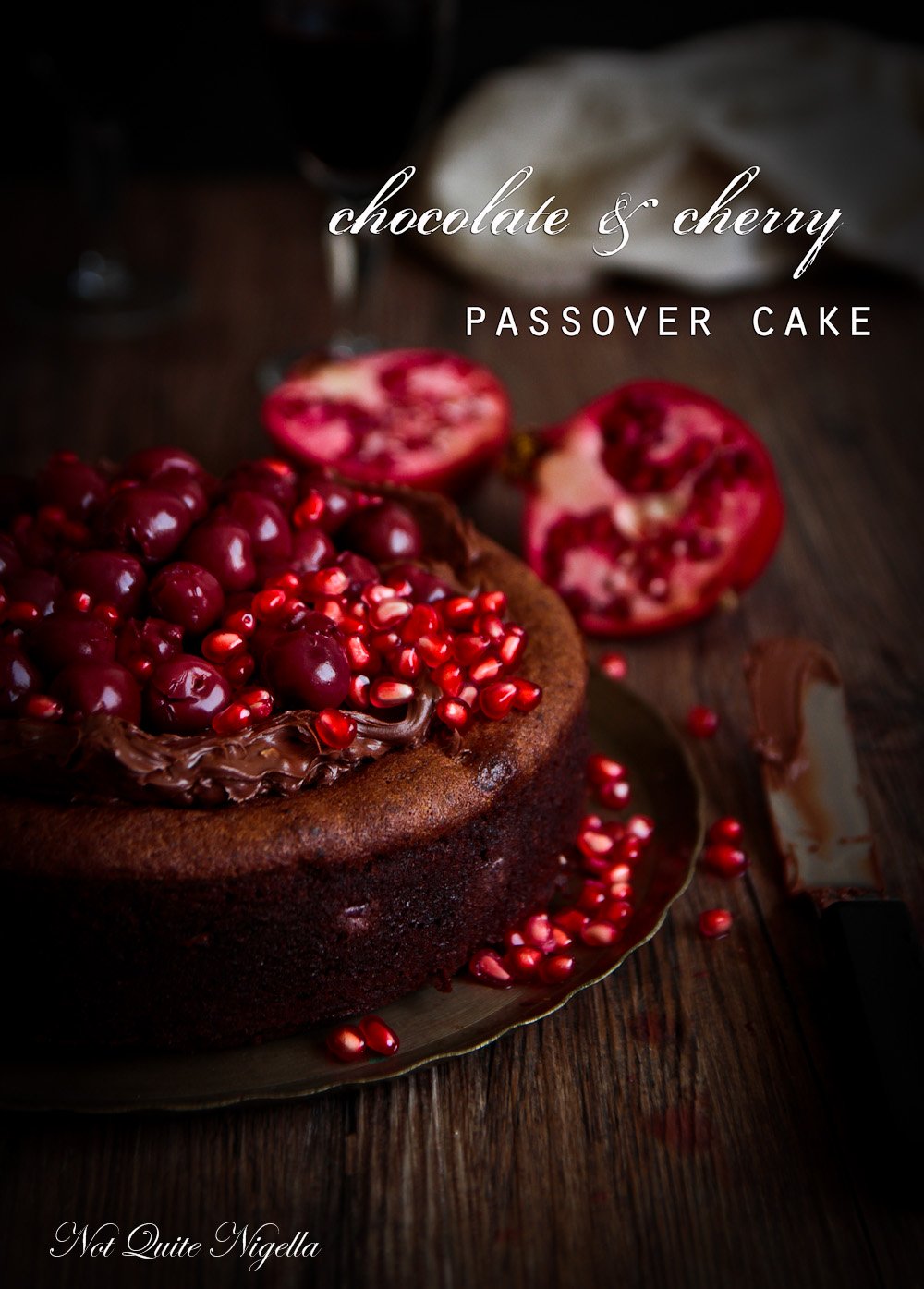 This intensely rich and dense chocolate cake is simple to make yet delivers in flavour. This Slovakian chocolate cake gets its lift and airiness from egg whites and is a perfect cake to celebrate an occasion with given the jewel like sparkles of the pomegranate arils and soft texture of the sour cherries. It is also perfect for Jewish Passover or Pesach.

They often say that time was simpler when you were a child. Certainly times were simpler a couple of decades ago with less technology and then there are certain things that were much less complicated. The issue of religion tends to be less complex for a child or even a teenager. Two of my closest friends during High School were Jewish so I grew up eating gefilte fish, matzo ball soup, lox and caviar. Religion didn't define them, it was a part of them and it certainly never, ever became the subject of an argument or heated discussion.

For me, introductions to religions or cultures are generally done through food. What better place to meet someone than by breaking bread or passing a plate across the table. Around Easter there is a concurrent Jewish celebration called Passover or Pesach. This year it started on Friday April 3rd and finishes on Saturday April 11th. It's a celebration of when the Israelites were freed from slavery. When they were freed, they were said to be in such a hurry that they could not wait for bread to rise so unleavened bread was served to them and nowadays matzo is popularly eaten. 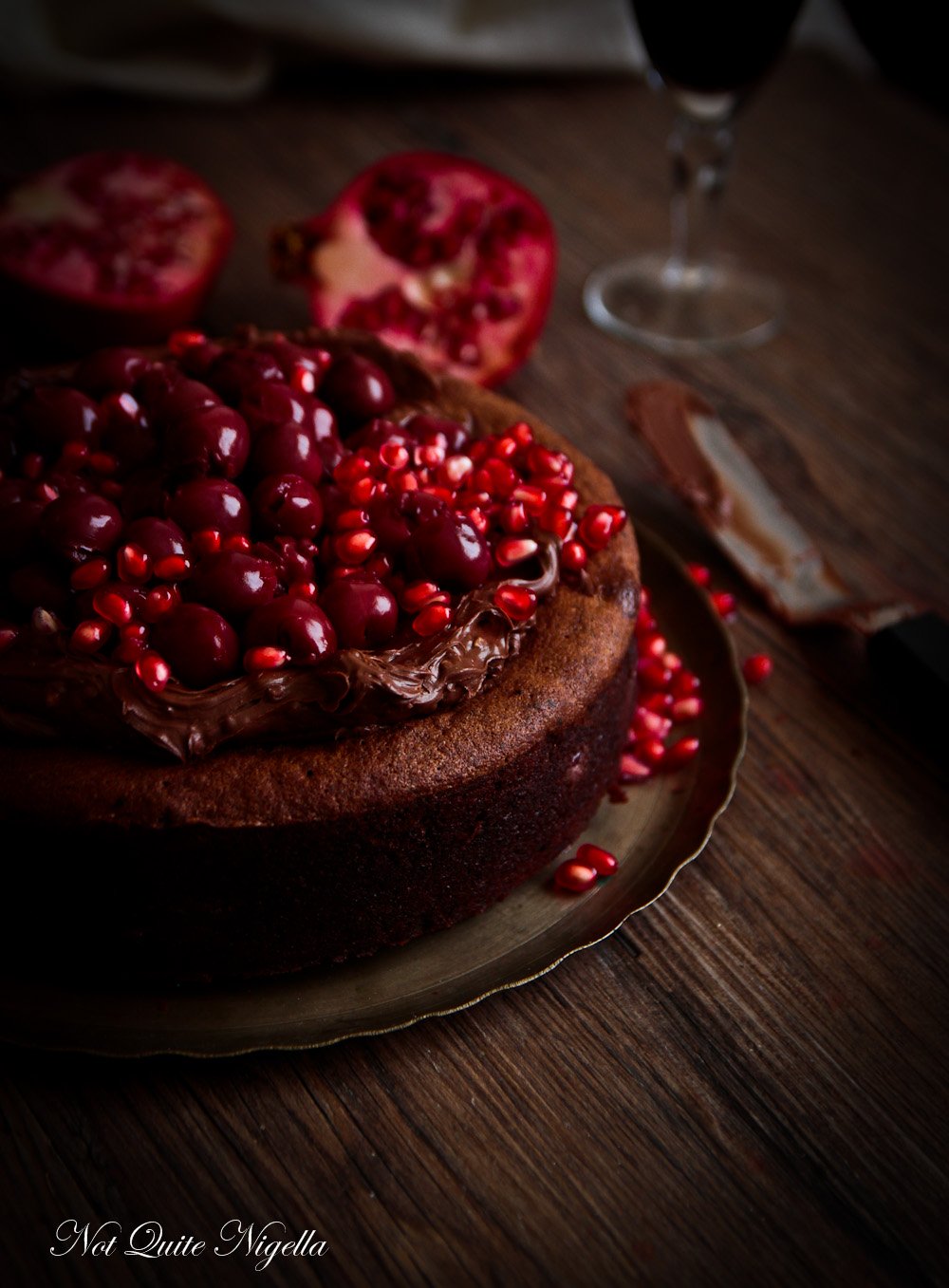 Now flourless and yeast free dishes are eaten. I came across this recipe from a Dear NQN reader Wendy Boynton, a researcher at ABC's Compass program. She wrote to me about an upcoming Compass episode called "The Taste of Memory" where Jewish holocaust survivors passed down recipes to their family members. It was produced by Irris Makkler, an Australian journalist who lives in Israel.

Irris says, "Food is crucial to this Festival. Jews eat different foods - bread made with yeast is prohibited, and no cooking or baking with ordinary flour; there are different dishes and cutlery, and even religiously mandated spring cleaning...Jews don’t eat bread or any food with yeast during Passover. And it’s not one night, it’s a whole week, of eating only specially baked unleavened bread – large square crackers called matza. Some European Jews go further and eat no grains, pulses or rice of any kind! The restrictions do lead to creativity with cooking. Quiches without bases, or with bases made from mashed potato, or crushed matza. (This will be familiar to people on gluten free diets.)"

There were three recipes detailed in this program including Eva’s chocolate cake with ground walnuts and sour cherries, Rita’s hazelnut coffee meringue and Lena’s Passover almond Macaroons - all made without flour for passover. I decided to go with Eva Grinston's flourless chocolate cake because, well you know me right?

The half hour documentary (click here to watch it) is well worth watching. It was wonderful to watch these grandmothers all with their own personalities teach their grandchildren and children these recipes that meant so much to them. In a bittersweet fashion they cushioned these recipes with anecdotes about the holocaust and the horrors that they each underwent and how close some of them actually came to dying. There was the feisty 96 year old Lena Goldstein who still drives, lectures and bakes or Rita Ross whose family was saved by a Christian couple, one half of which was German.

This flourless chocolate cake defines rich and is utterly decadent and the ground walnuts give the cake a gooey, dense texture while the tart cherries and pomegranates lift it with a light tartness. I gifted the cake to my trainer Nina who just happens to be Jewish and her boyfriend Garth waxed rhapsodic about it. He said, "I wish I could bath in a pool of this cake..."

So tell me Dear Reader, do you have many friends of different religions, cultures or beliefs? And do you make notes on your recipes? What is your most treasured cookbook? 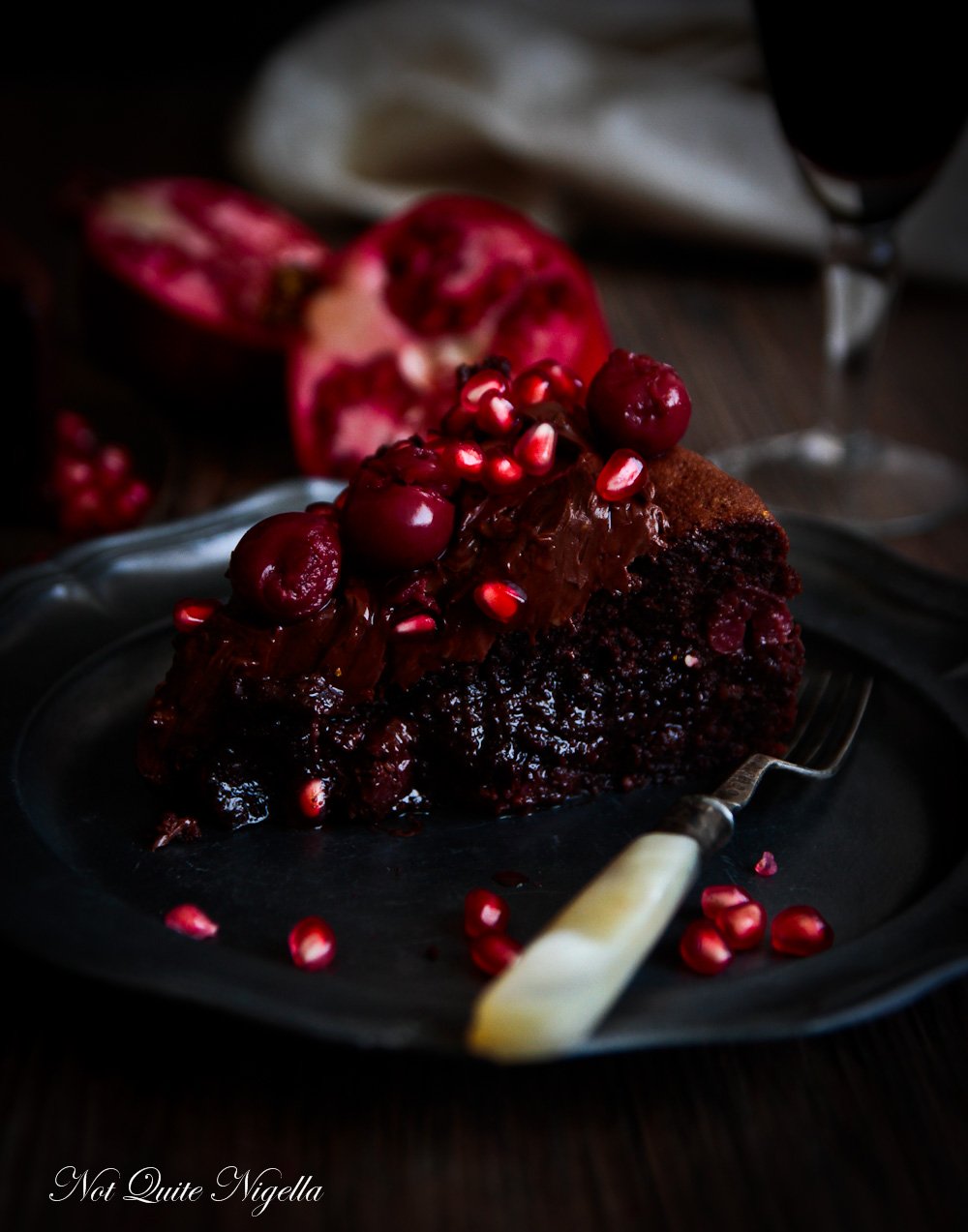 In Czechoslovakia, they picked the sour cherries off the tree. In Australia, Eva buys them, imported from Europe; the best, she says, are in a jar, not a tin. Sometimes, when she can’t locate sour cherries, she uses tinned pineapple instead.

Step 1 - Preheat oven to 160C/320F. Whip egg whites and cream of tartar to a stiff meringue. Set side in a bowl. Then cream butter, egg-yolks, sugar, until light and fluffy. Add melted chocolate. 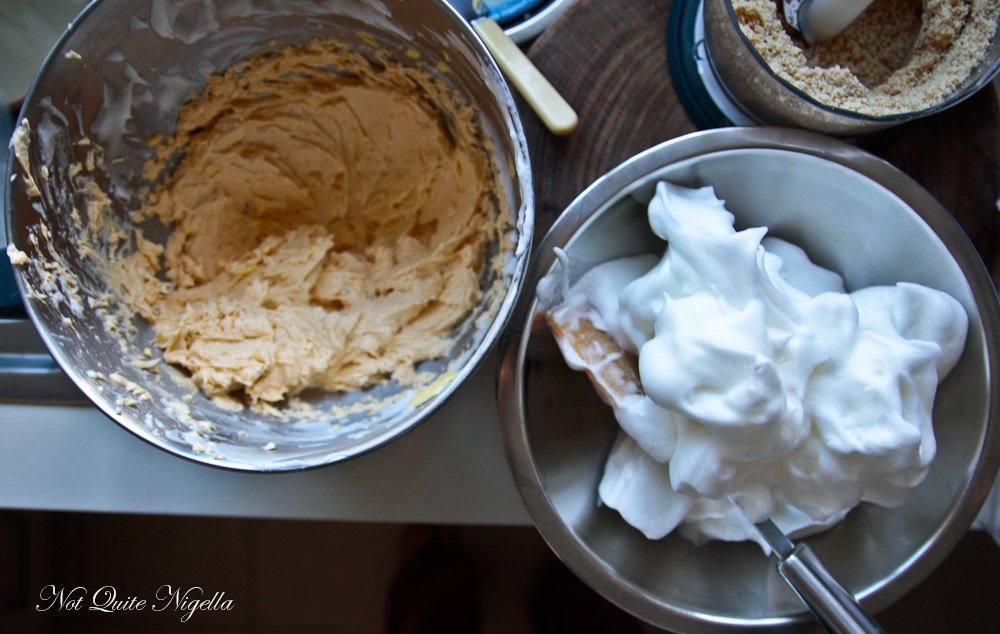 Step 2 - Gently fold the egg whites into the chocolate mixture, alternating with nuts. 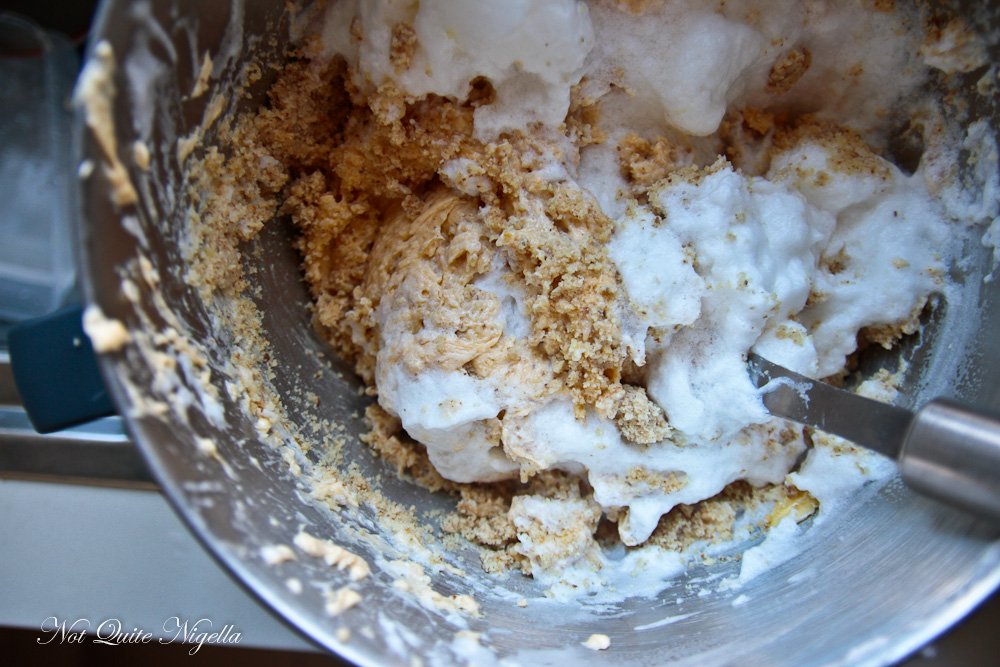 Step 3 - Line a 20cm/8inch baking tin with parchment. Scrape half of the batter into tin and then scatter half of the cherries over this. Add the remaining batter and smooth down the top. Bake for 1 hour or until a skewer inserted comes out clean 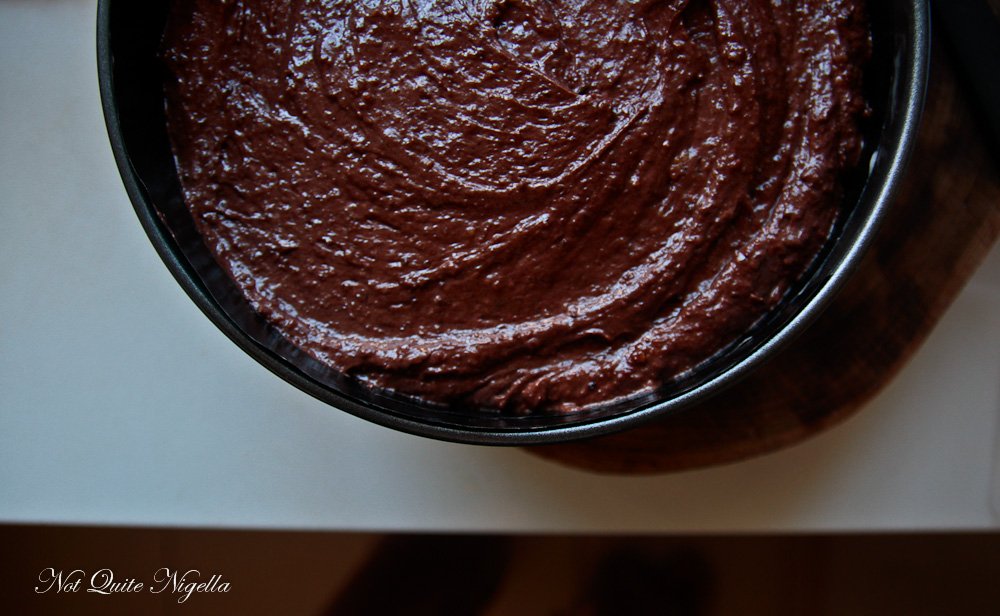 Step 4 - Cool completely in the tin. Place on a serving plate and spread the chocolate hazelnut spread on top. Top with the remaining half of the cherries and the arils from half the pomegranate. 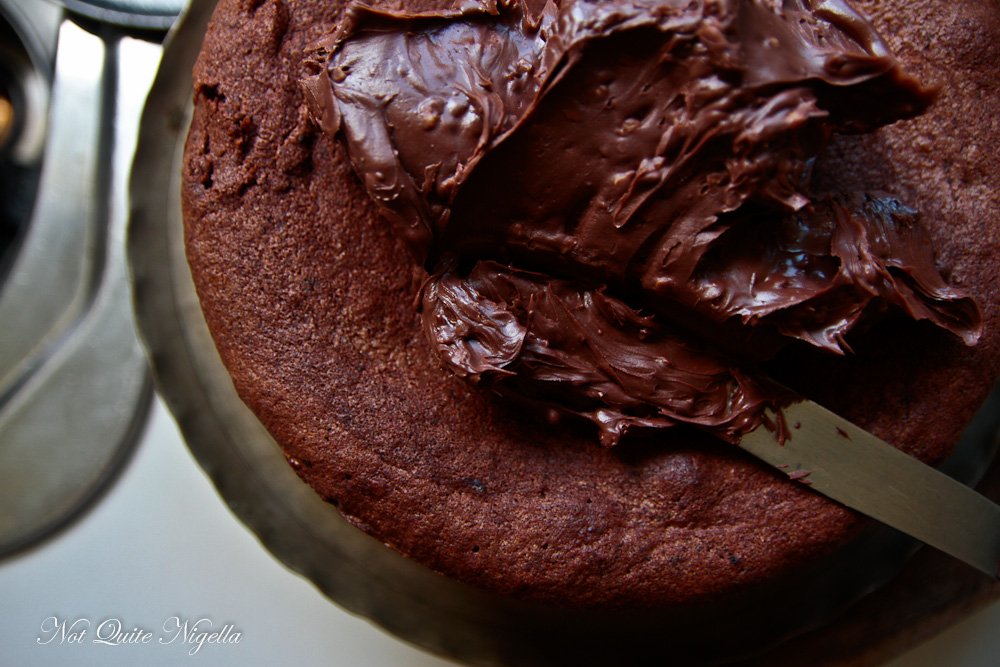