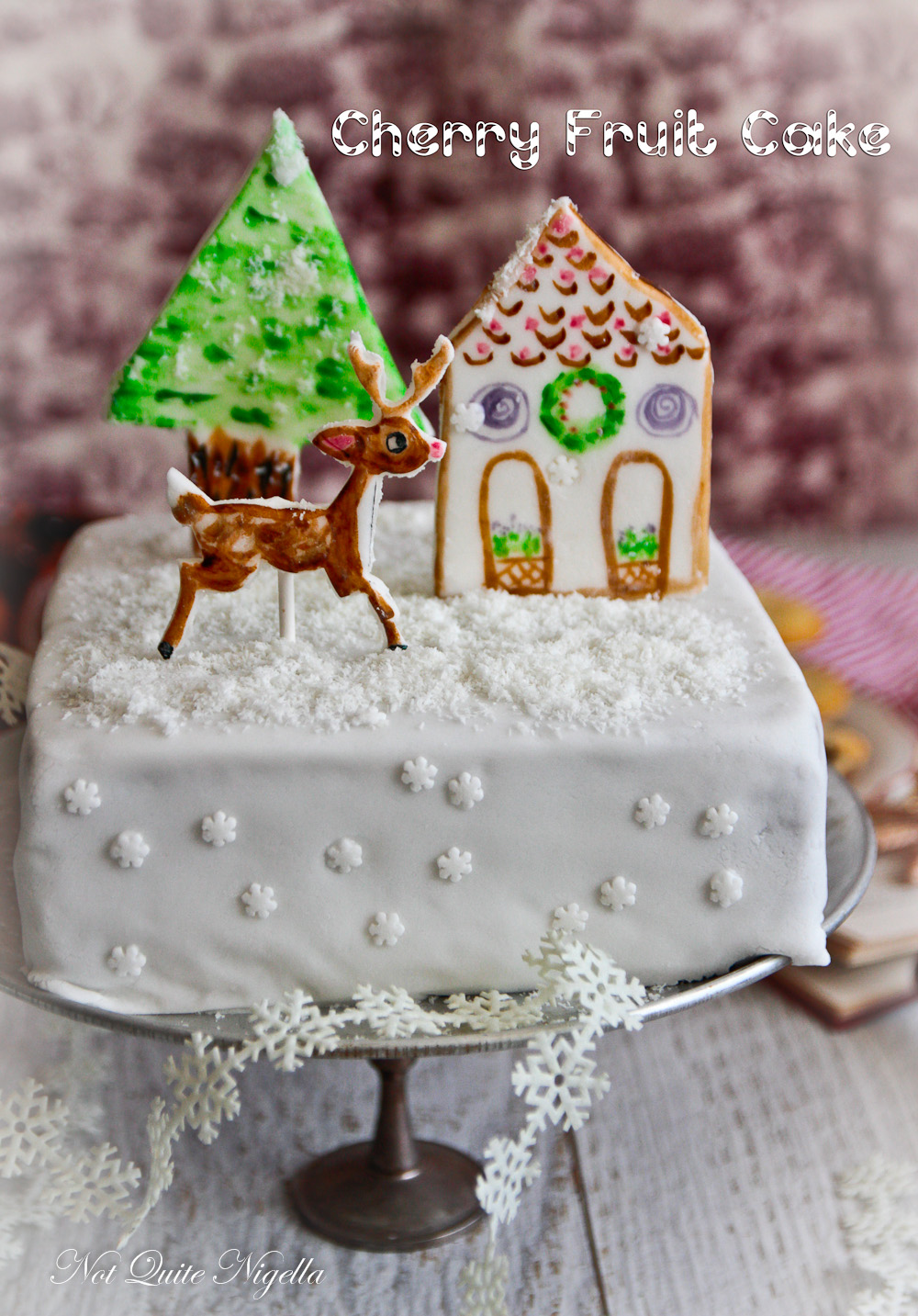 Recipe brought to you by Woolworths Gold

I like to think that our place is a welcome home for eccentrics. Many of my friends have such interesting personalities and there's no one really more charmingly eccentric than my friend Queen Viv. Recently we had planned dinner out when she called me the night before and told me that she couldn't come. Her beloved cat Radar had died a month earlier and she was going to receive another Oriental cat the next day by cat courier. "Cat courier?" I asked. "Is there such a thing?". Well apparently so!

She rang me the next afternoon. "Well it looks like I can come to dinner tonight! The whole cat thing was a scam!" she exclaimed. Indeed, she had almost fallen victim to a scamming ring where pedigreed pets are offered through classifieds for free and people pay for a courier to transport their new pet as it has *just *moved interstate. Her suspicions were raised when the seller and cat courier both spoke with French accents and the clincher was when they called her back from a ...you guessed it, a Nigerian phone number to ask for pre-payment of the cat courier fee! 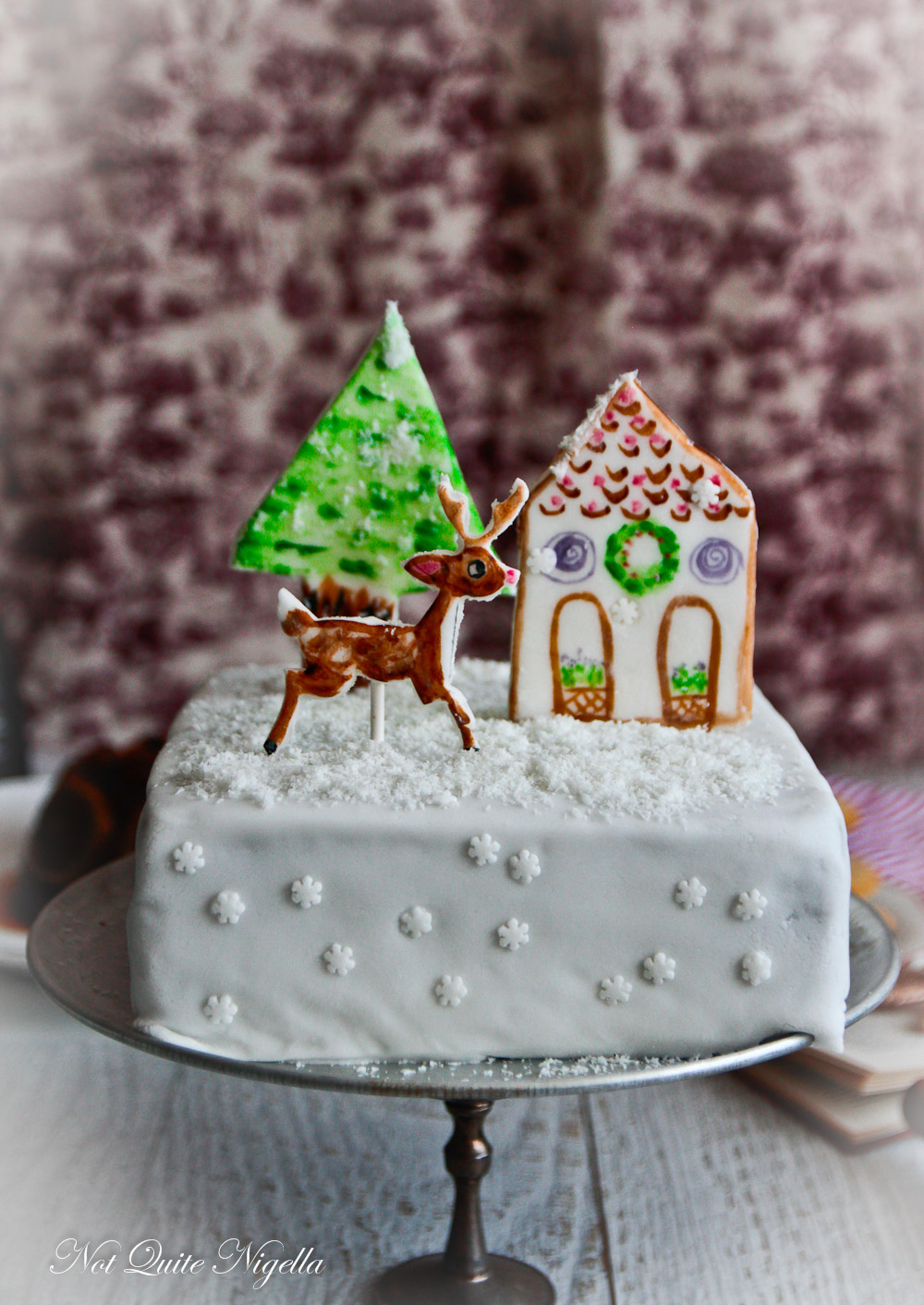 Poor Queen Viv! She was obviously sad that she wasn't getting this cat but she was also very relieved that she hadn't lost several hundred dollars on a cat courier! And what does she have to do with this fruit cake? Well not much apart from the fact that we've both been called fruit cakes in our time and I'm sure that's why we are close friends. 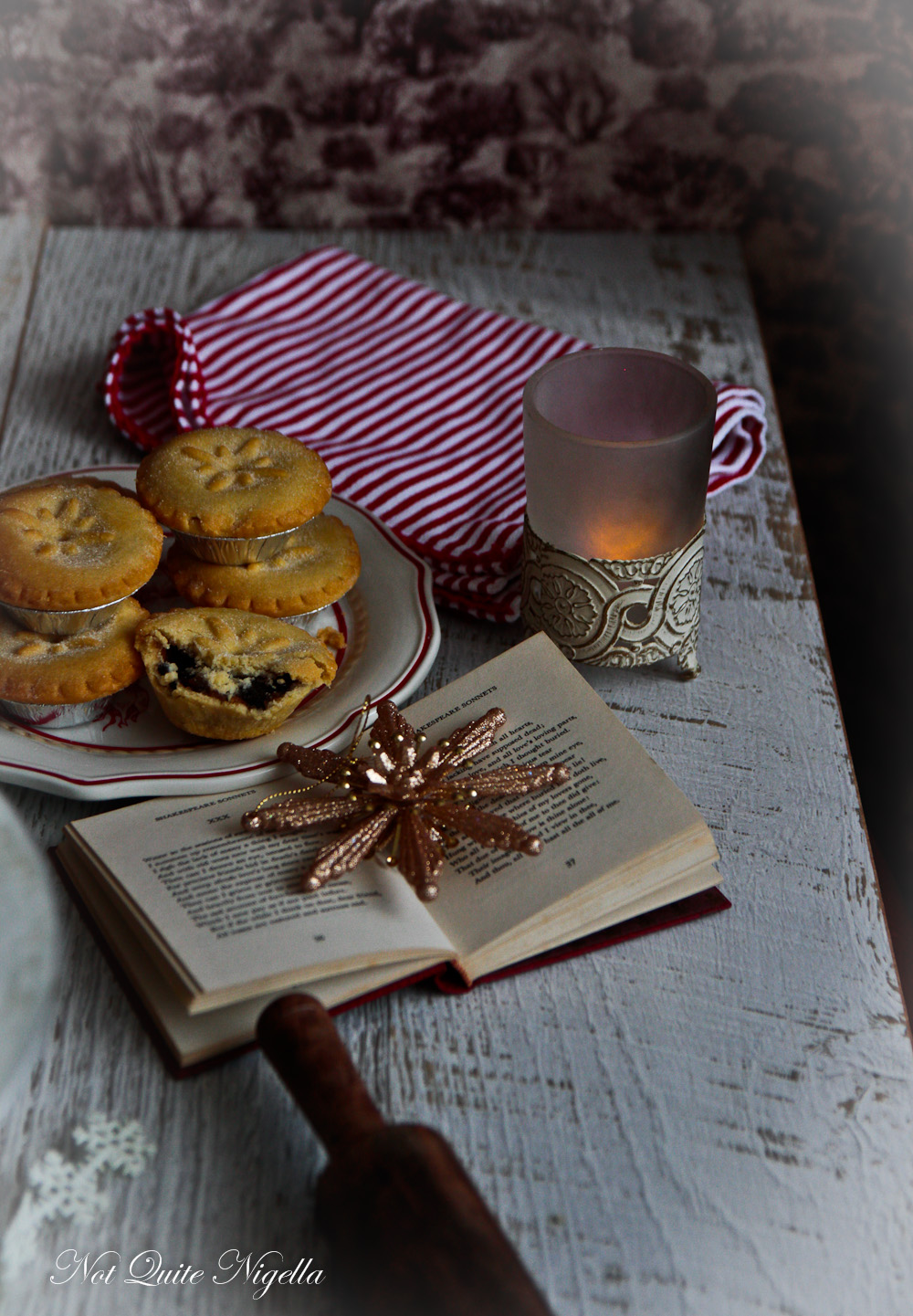 Christmas is still for many about fruit cake. If making a fruit cake is just too troublesome and they can be quite a production, then here are some easy luxury entertaining options with Woolworths Gold puddings and fruit mince pies. The Fruit Mince Pies with single malt Scotch Whiskey have won silver at the Sydney Royal 2014 Fine Food Show. Baked in the Scottish Highlands they are made with a single malt 10 year aged Scotch Whiskey from Glenfarclas, a family owner distillery established in 1836. 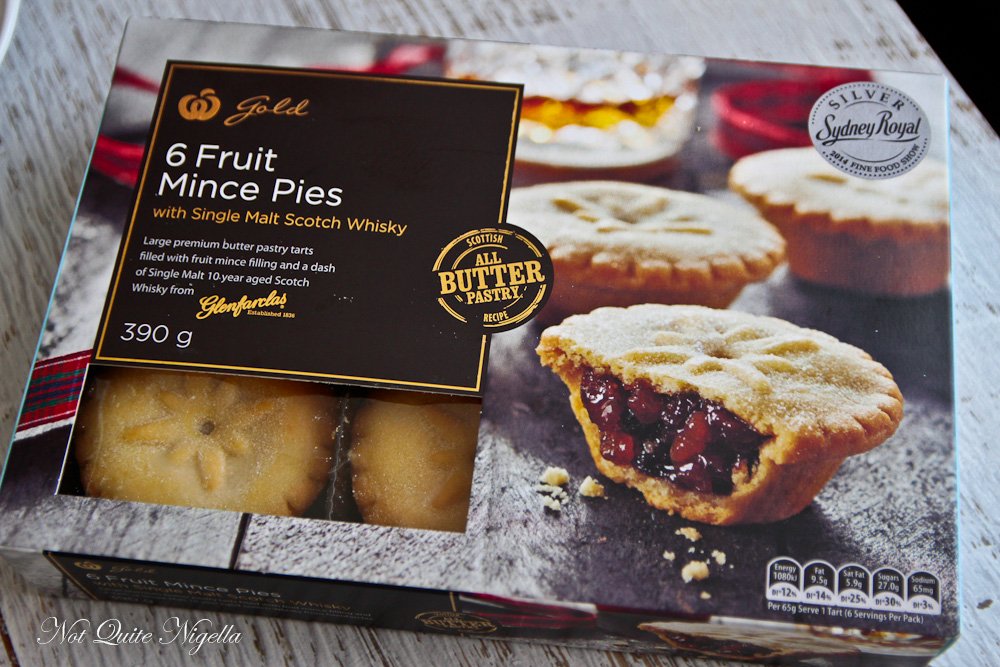 Baked in small batches the outside is a crumbly all butter pastry. The tarts are filled with a soft plump fruit filling with raisins, sultanas, ginger, orange and apple and then dusted in fine sugar. At $6.50 these luxe pies are such a delicious and affordable treat. I meant to just have a bite but then the entire thing disappeared and I went looking for another... 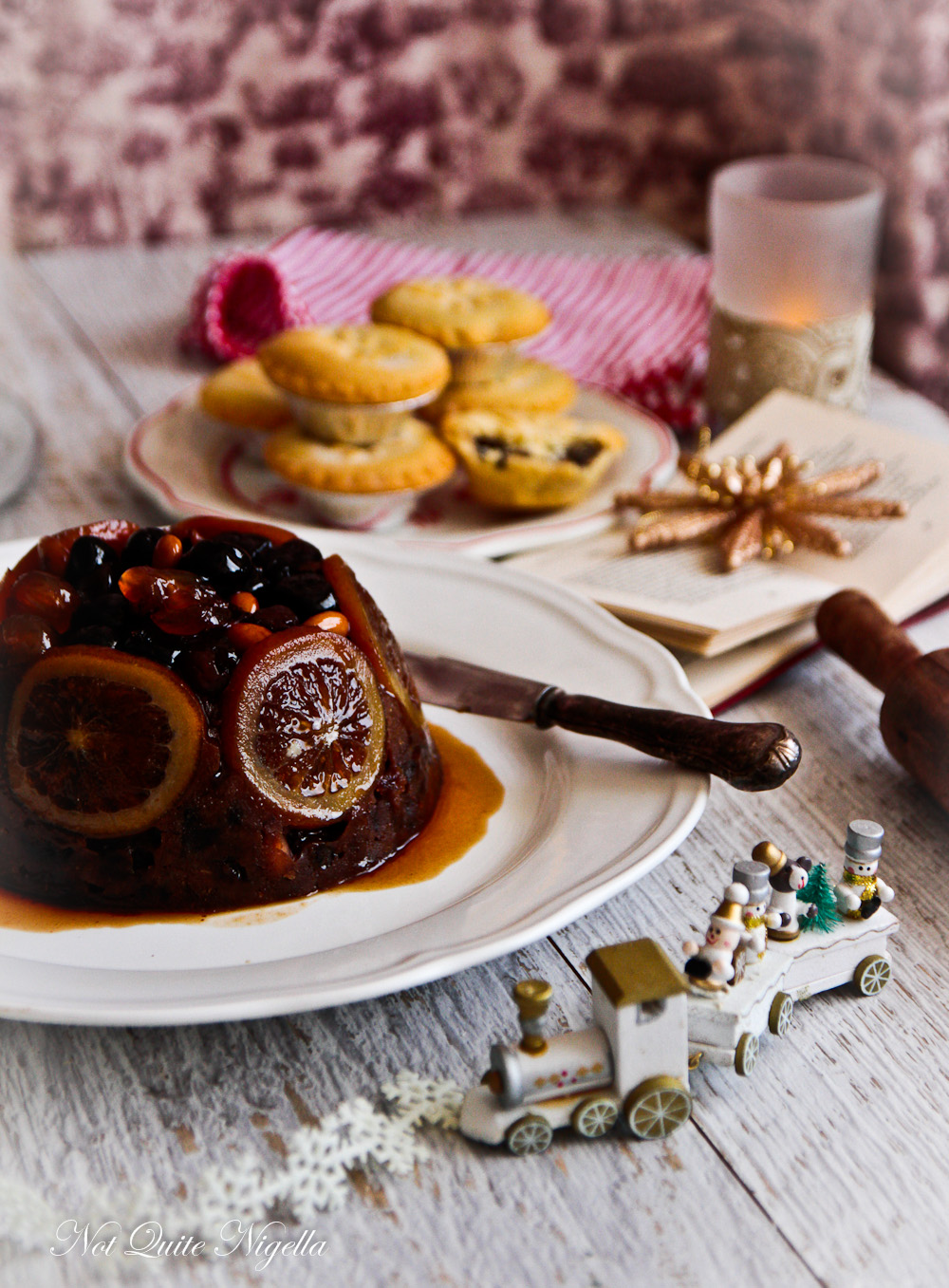 The Woolworths Gold The Ultimate Christmas Pudding with Courvoisier VS Cognac is a show stopper. Okay it is a bit more expensive than others at $35 but it is worth it. The 1.2 kilo pudding has been matured for 6 months if you eat it on Christmas day (timing is everything with these puds!) and is packed with super luscious fruit. 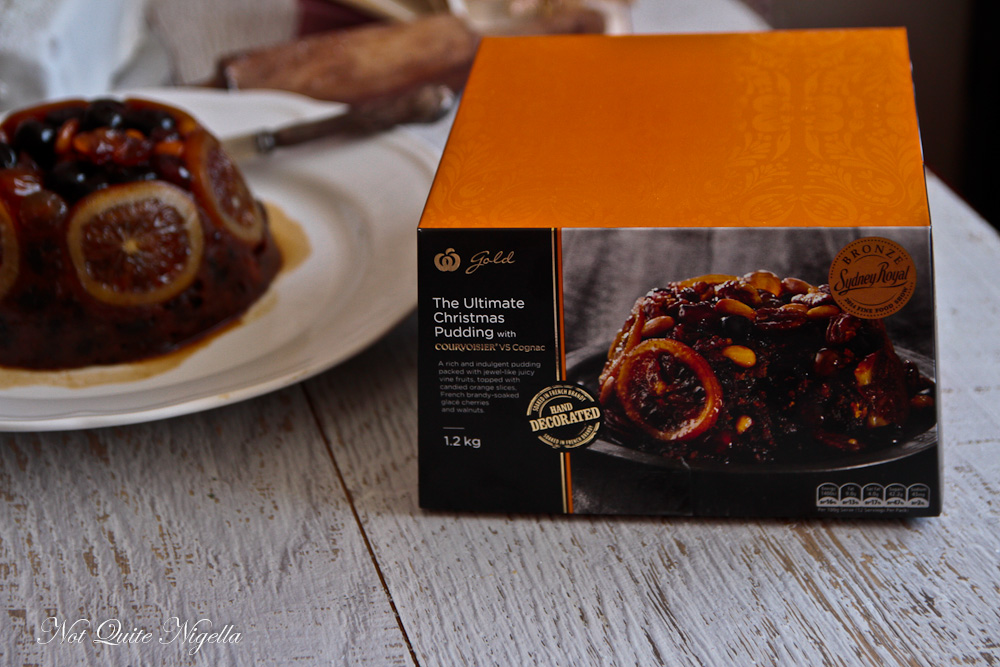 This award winning pudding (Bronze at the Sydney Royal 2014 Fine Food Show) is actually made by the world's oldest pudding manufacturer in Derbyshire, England. They are individually hand decorated with French brandy soaked cherries, walnuts, almonds, pecans and candied sweet orange while the pudding fruit is also soaked in Courvoisier VS Cognac. It is as tasty as it is glisteningly gorgeous. 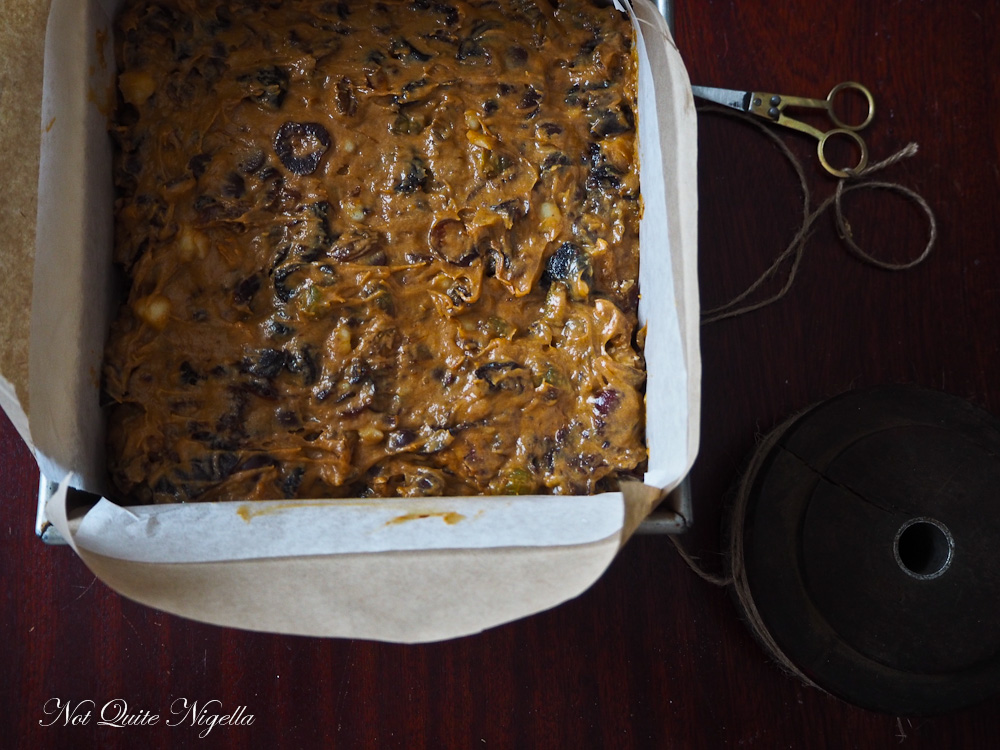 If you do want to go with a home made version, then here is my recipe for the cherry and chocolate fruit cake. It is a production in that the fruit soaks for a week in the whiskey and orange juice and it looks so glistening and plump and smells so heady and rich that you might just not want to put this in a cake, rather eat it with some vanilla ice cream (or is that just me?). 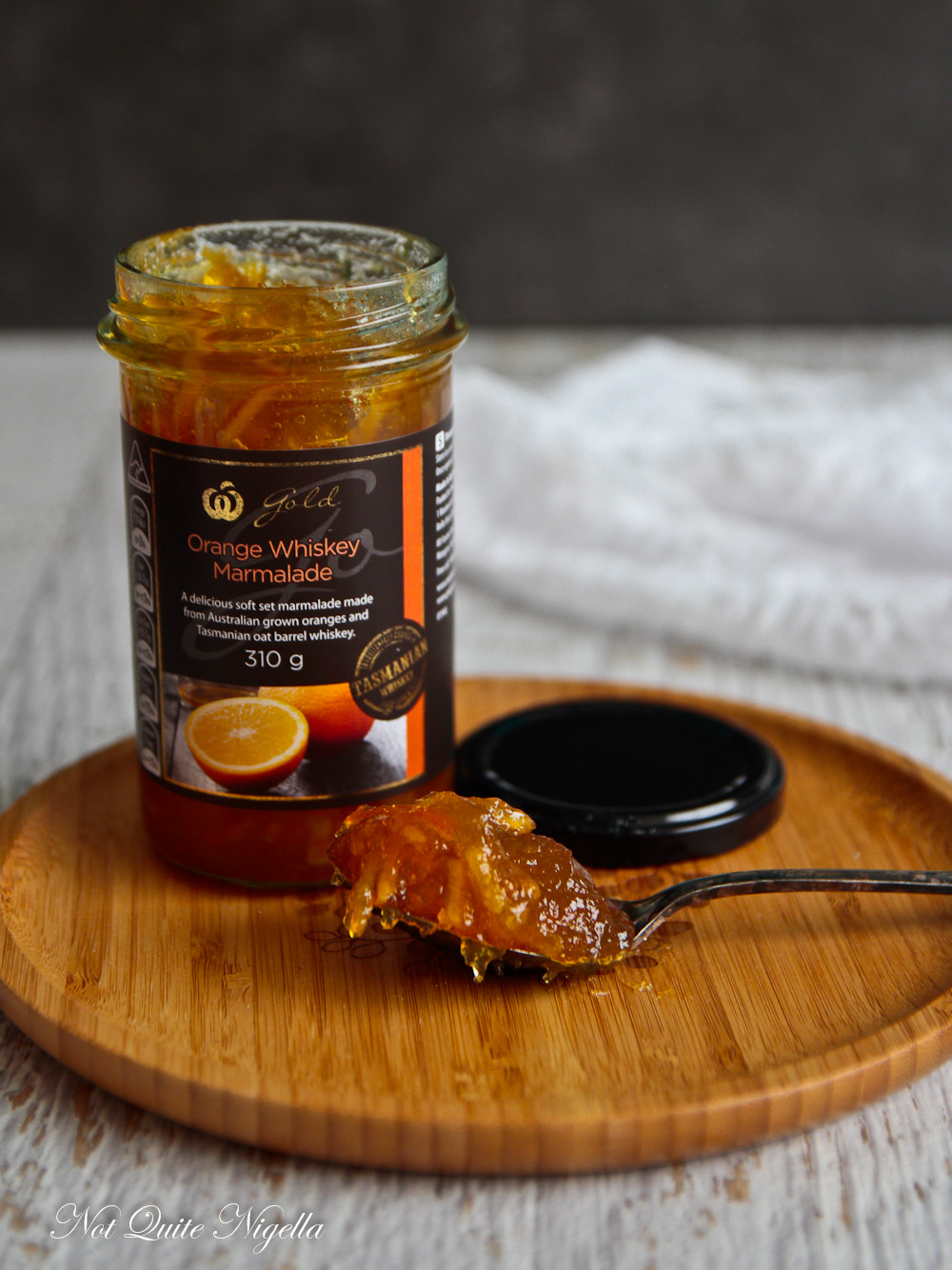 This is a luxurious fruit cake, not for the faint hearted or those watching their pennies. In fact it is what I call a Christmas fruit cake because a lot goes into this cake and it should really be served on a special occasion like Christmas. The main fruit in this is cherries in both dried and glace form as well as the honeyed sweetness of golden raisins and dark dampness of prunes and a couple of tablespoons of Woolworths Gold Orange Whiskey Marmalade made with Australian oranges and Tasmanian oat barrel whisky cooked in aged copper vats. I made this cake a bit richer by mixing in some marzipan that adds texture and sweetness as well chocolate chips. It's based on one of Charlie's recipes which was rich and moist with fruit.

You can of course decorate it with just the fondant and some holly and berries but I thought I might go down the snow route with a reindeer, a tree and a gingerbread house. You can add a snowman or whatever you might want to add to the Christmas scene! 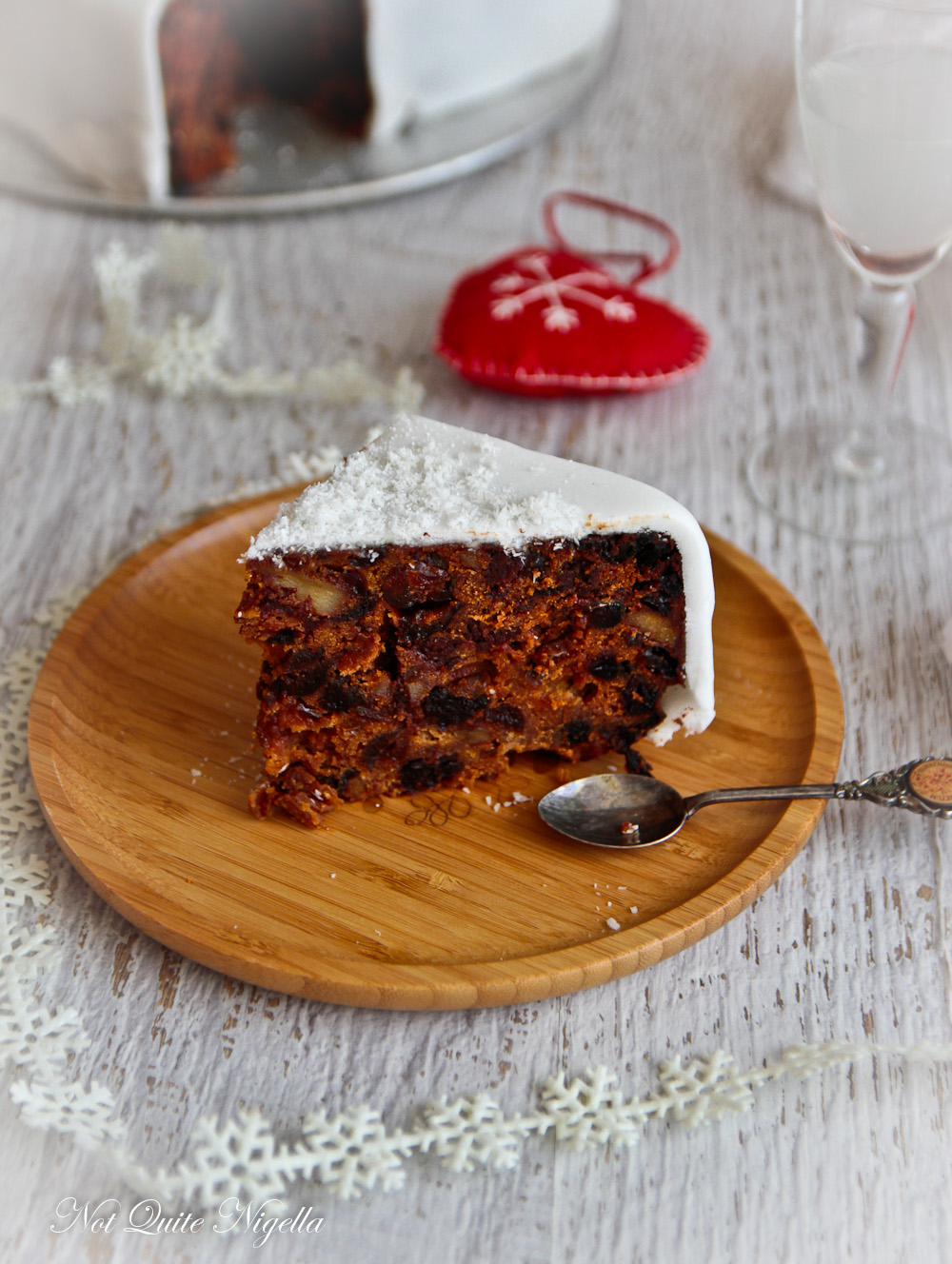 So tell me Dear Reader, do you usually buy or make your own fruit cake or pudding every year? Do you eat pudding or do you eat other something else for dessert? And have you ever heard of the cat or dog scam or known anyone that has fallen victim to a scam?

Decorating time: 45 minutes (and drying time, can be done while the fruit soaks) 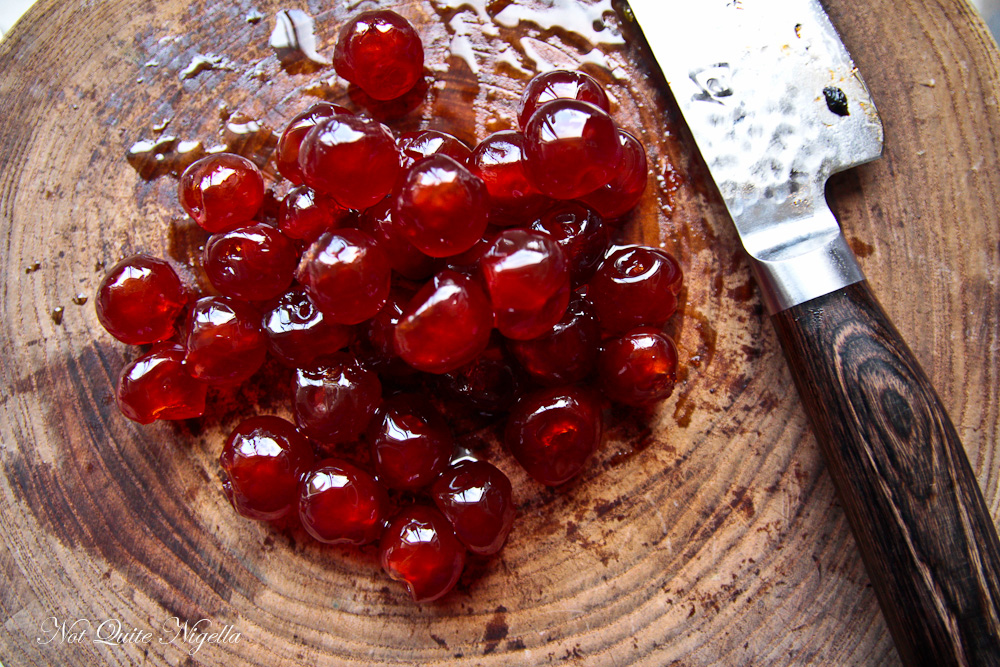 Step 1 - Begin this a week ahead by roughly chopping the prunes, both types of cherries and raisins. Place in a container or bowl and mix with the juice of 1 orange and half a cup of whiskey or brandy. Cover with a lid or cling film and soak for one week in a dark area of the house, ensuring to mix the fruit mixture to coat in the juice once a day. After the first 3 days or so, add the remaining juice of orange and 1/2 cup of whiskey or brandy. During the week that it soaks, you can skip ahead and do steps 5,6 and 7 with the decorations as these will need to set hard and are best if done over a few days. 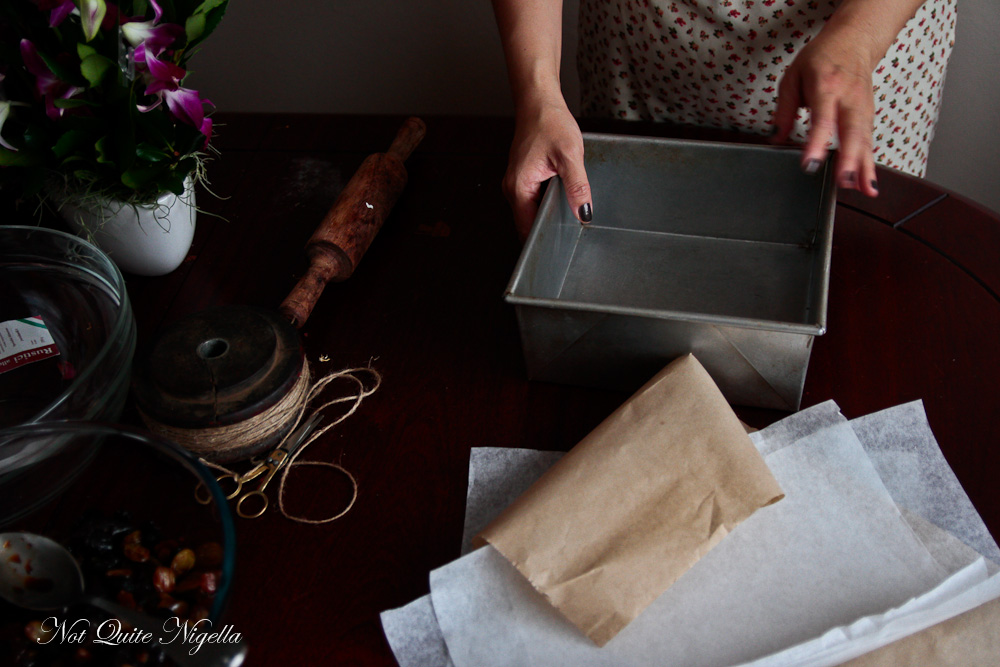 Step 2 - After a week the fruit is ready. Preheat oven to 160C/320F. Line a square 8x8 inch baking tin with 2 layers of brown paper and 2 layers of baking paper. Beat the marzipan and butter together, then beat in the sugar, then the eggs one at a time. It is ok if it looks curdled. Add the fruit and then add the pecans and chocolate chips, marmalade and the flour, cinnamon, nutmeg and allspice in two alternating lots and mix until combined. 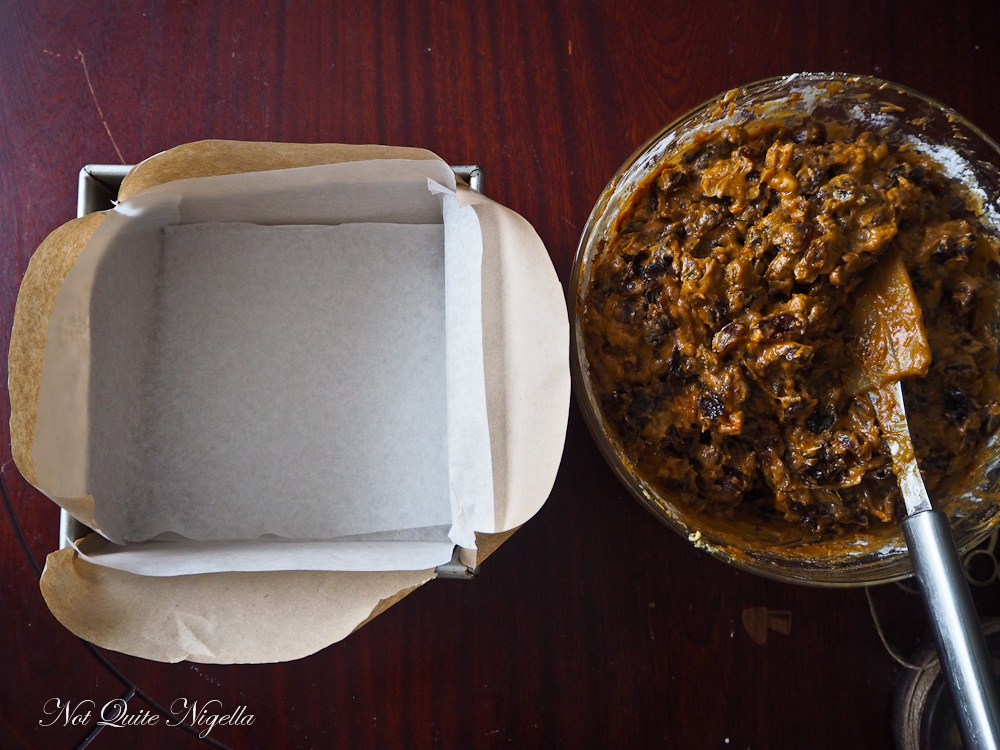 Step 3 - Spoon into the prepared tin and bake for 3 hours. Halfway through baking, cover with foil tightly if it is getting a bit too brown. As soon as it comes out of the oven spoon over with the extra whiskey or brandy. Listen to the amazing crackle. Seriously, that should be a ring tone. 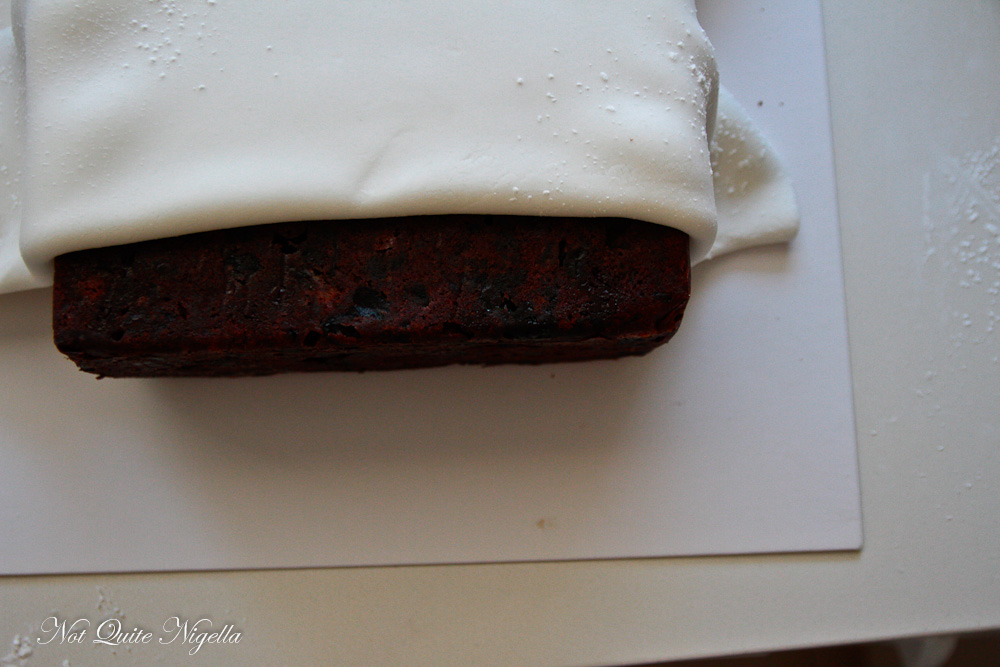 Step 4 - Sprinkle a clean surface with cornstarch and roll out the fondant so that it is large enough to fit on top and around the cake. Place the cake on a clean cake board or the serving plate (I made the mistake of having to move it to a plate and so the edges weren't quite as tidy and clean as I wanted when I served it) and gently lift the fondant over the cake. This can be challenging and takes practice. If it breaks, it is best to start all over again before the fondant touches the cake as it will stain with the colours of the cake. If it just barely touches it and you need to start over again, pick out and discard the coloured bits. 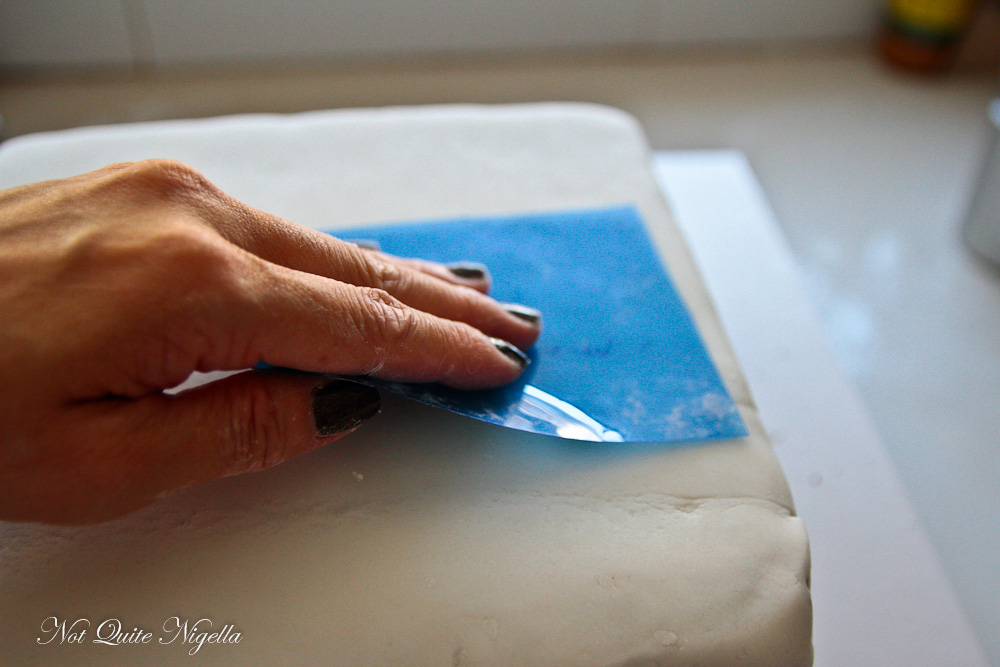 Step 5 - Smooth the fondant with a little plastic overhead square. Allow to set while you get on with the figurines. You can make these in the week while the fruit is marinating as it is best if the fondant is totally set. Cut out a reindeer using a cutter and you can use a paring knife to cut out a tree and a gingerbread house. You can make a couple of trees too or bushes. 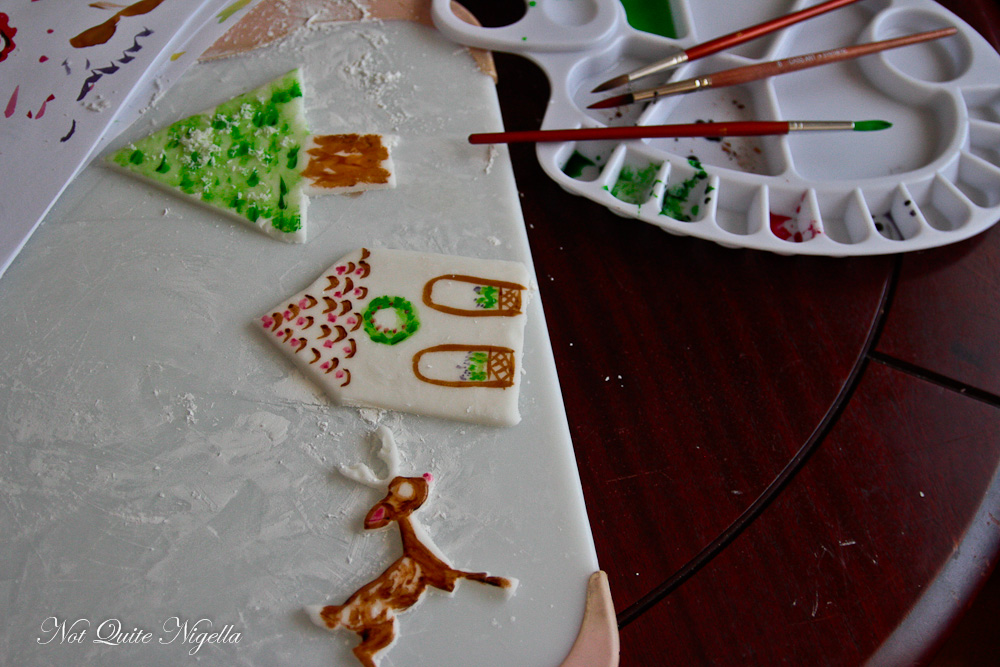 Step 6 - Take a #8 paintbrush - the key to painting is to layer colours from the lightest to the darkest. I made a video tutorial on how to do this if you want to take a peek. I was most worried about the reindeer as they have white patches but that turned out fine. The tree is very easy and you can go a bit wild with the gingerbread house or make it a regular looking hut. Allow to dry completely and become firm. 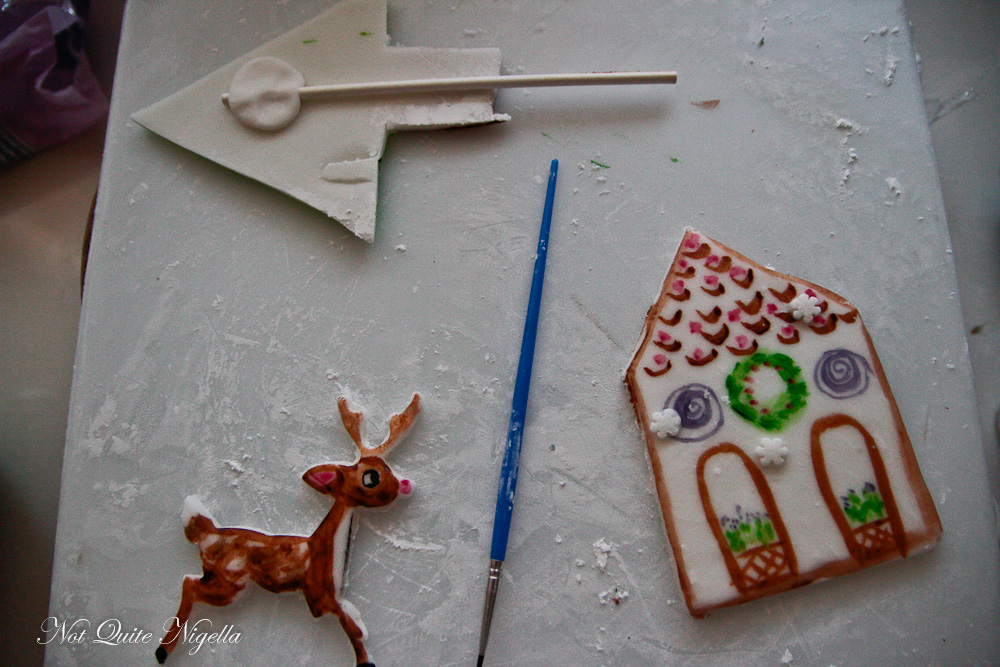 Step 7 - Make sure that the pop sticks are the correct length - mine were a bit too long so I trimmed them down. Take a bit more fondant (you should have lots left over), dab a bit of water on the back of the set and affix the pop stick. Allow to dry face down. Then stick them into the top of the cake. I put the tree at the back, the house in the centre and the reindeer at the front. Sprinkle with coconut and you can also affix the snowflakes on the front with a little water or royal icing.