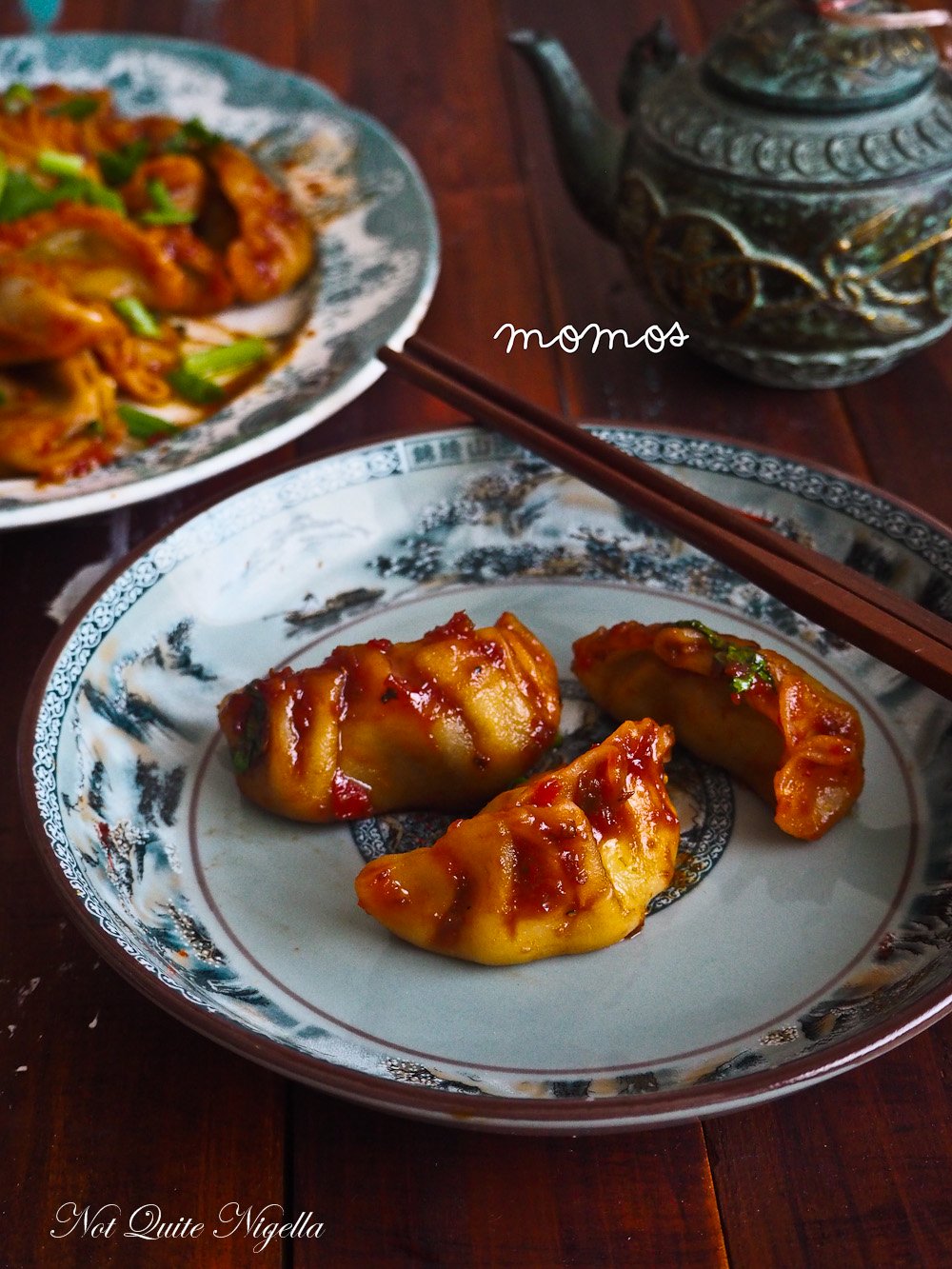 *The Nepalese momo dumpling is a delicious parcel of soft dumpling dough encasing a vegetable or meat filling. Here I show you two recipes: one with a vegetarian (indeed a vegan) filling and the other a pork & ginger momo. These are then coated in a delectable sweet and spicy sauce for dumplings with a difference. *

Dear Reader, I have to tell you about a new man in my life. He's 7 years old, a massive foodie and he also happens to be my new boyfriend.

A few weeks ago his mum Aleney asked me if I would answer some questions for her son Raffles who blogs at Boy Eats World. Her gorgeous curly headed son is a seven year old superstar in the making. He has even been offered his own television show but Aleney wants him to grow up with a regular childhood. Well as regular as a kid who loves chilli, Japan, Halloween and who wants to experience Mexican Day of the Dead can be. He wants to be Oprah. I mean the kid is cool and clever and wise beyond his years.

They were such cute and fun questions (take a peek here if you want to read them). And then at the end he asked if I would have a dumpling date with him. Of course I said yes and one rainy night we met up in Kingsford for me to witness his "Fire in the Hole" dumpling technique. Raffles wore a black jacket, jeans and a Foo Fighters t shirt. I felt as though I was having a dumpling date with a rock star. 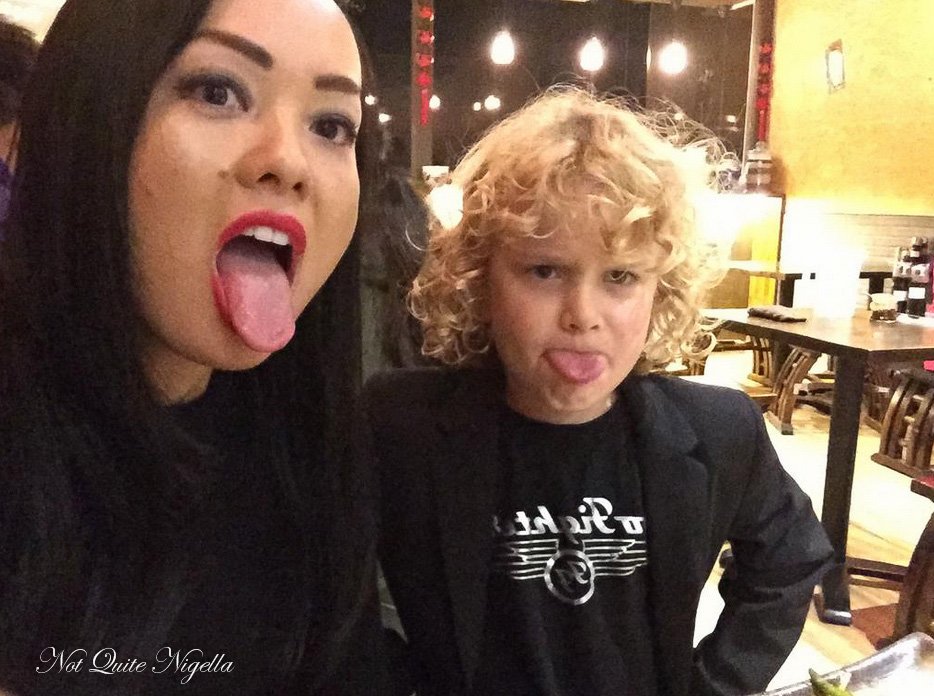 Me and Raffles pulling silly faces. Sorry this is the only photo I still have of us because my phone died!

He had brought me a present too; a glass skull full of chocolate coated sultanas. I gave him an ice cube tray that makes vampire fangs. During our date he told me, "I want to live in a giant dumpling house in a giant bowl of noodles!". Honestly, he couldn't have been more charming! We even took some pictures of us making funny faces. After a while he got a little shy and hid under the table but I could see that he was listening to our conversation, taking in everything like the little man that he is! 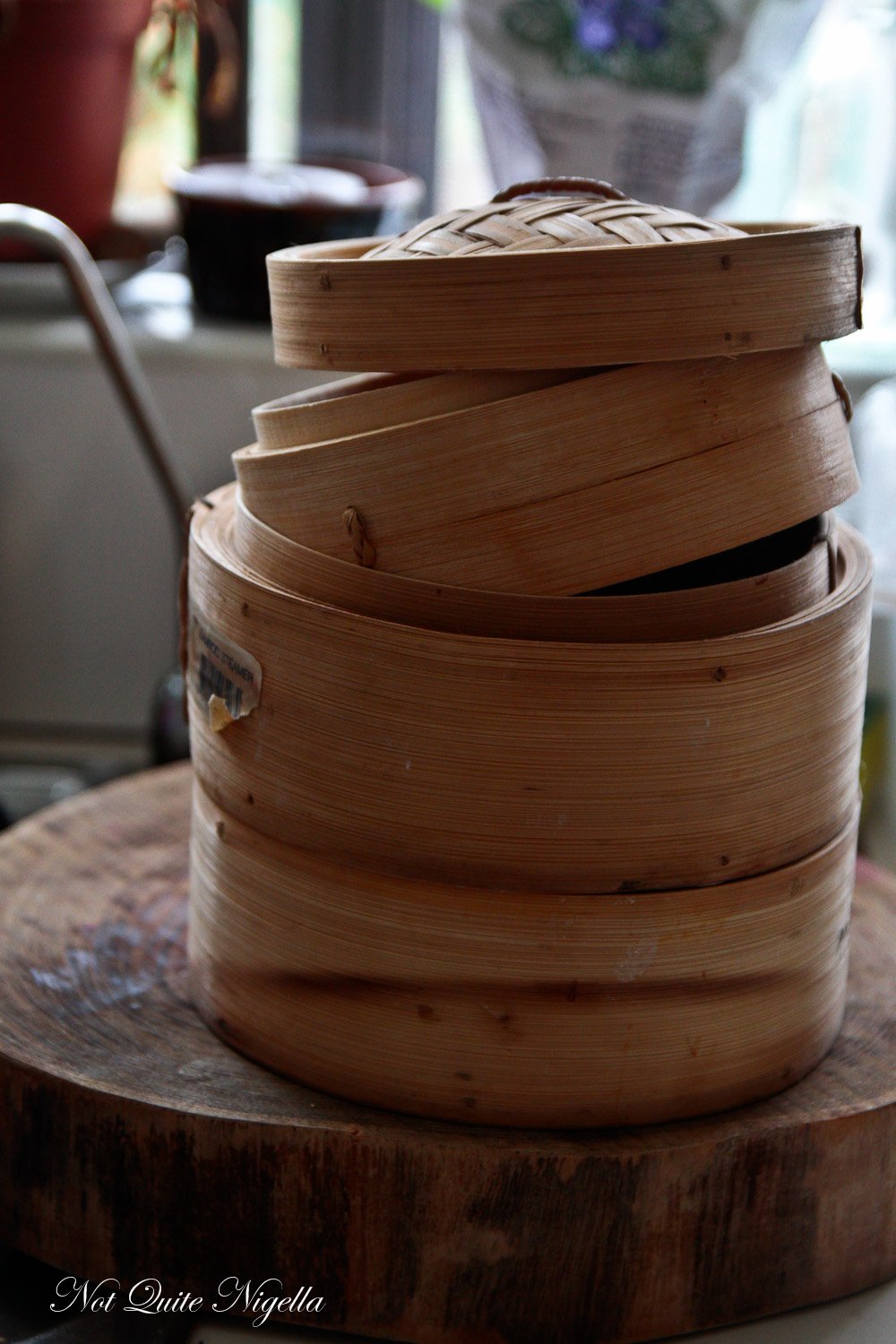 I thought about Raffles when I made these dumplings and wondered if he would like them. A few days ago I saw these dumplings on Ash's fab blog and I knew that I had to make them. Momos are Nepalese dumplings and they are steamed and can come with a variety of fillings. Ash's recipe was for a vegetarian filling (actually the whole thing is vegan but that was by accident). I also decided to make a pork & ginger filling just to see what it would be like.

You can buy the dumpling wrappers but there is a recipe to make them from scratch below. They're easy to make although they are time consuming. Dumpling making is always easier when there are at least two of you there. They're usually serve with an achar or dipping sauce but I was smitten by Ash's Manchurian sauce that coats the steamed dumplings in a rich spicy sauce, kind of really saving you the step of dipping them in chilli and soy sauce. Surprisingly I preferred the vegetarian/vegan ones a bit more. They were just so packed full of flavour that it was hard to stop at one. But that's not new for me and dumplings ;)

So tell me Dear Reader, how old were you when you had your first girl or boyfriend? How many dumplings could you eat in one sitting? Do you have a special dumpling technique? And do you have a favourite filling?

P.S. Actually you know come to think of it I know that Raffles would like these. It was also his birthday the other day and he had his friends donate over $100 for Unicef's Nepal Earthquake Children's Appeal instead of giving gifts. I mean honestly, he's going to out-Oprah Oprah soon! ;) 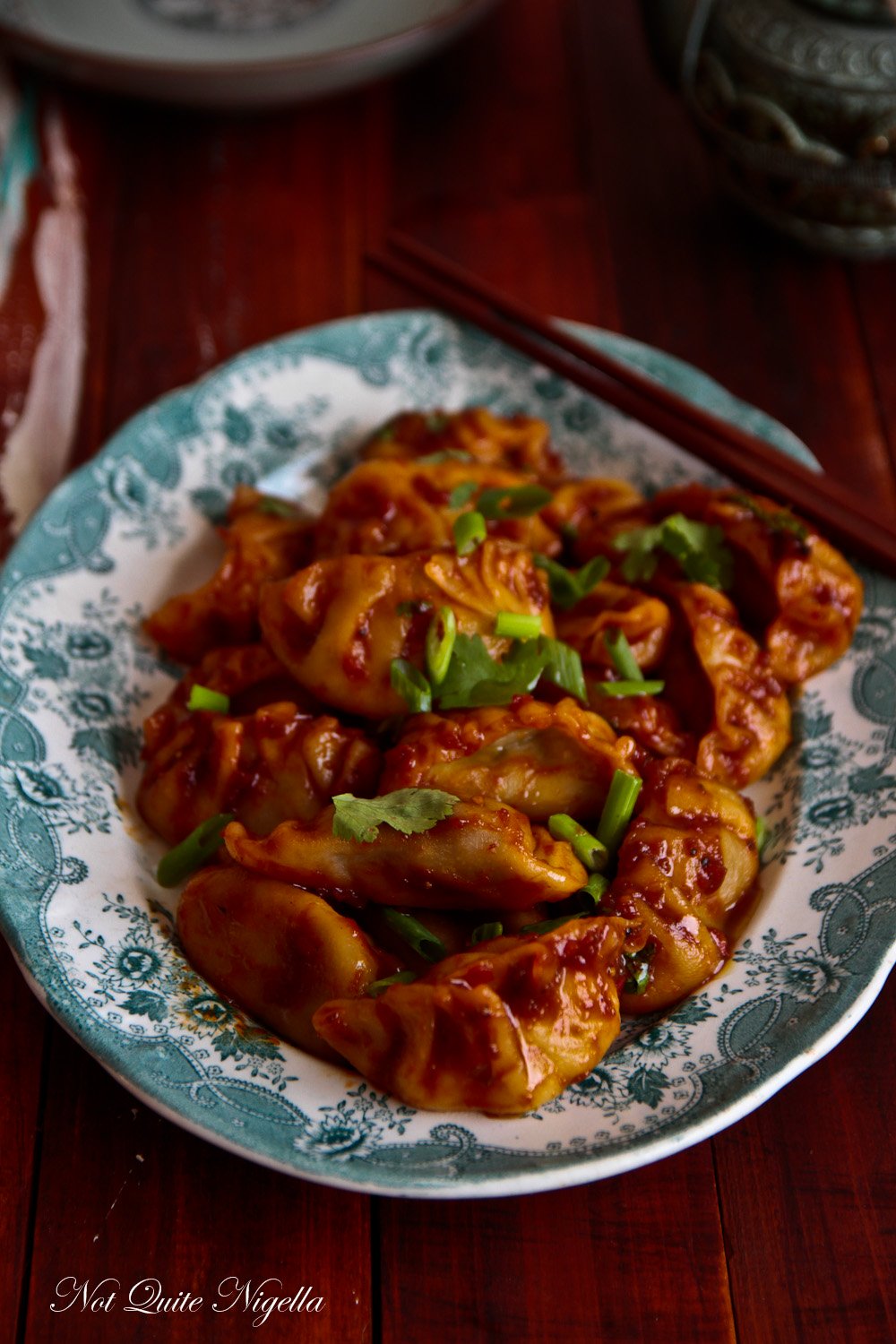 Preparation time: 1.5 hours plus 1 hour resting time for the dough

Cooking time: 8 minutes per basket (depends on whether you have a large steamer or not)

For the dumpling pastry (makes 48 dumplings). You can also buy these pre-made from the supermarket as round gow gee wrappers.

For the vegan filling (for 24 dumplings)

For pork & ginger filling (for 24 dumplings)

*You can save time but not grating these by hand and putting everything in a processor.

Step 1 - Make the dumpling pastry by kneading all of the ingredients together until it forms a soft, elastic dough. Roll into two log shapes and wrap in cling film and allow to rest for 1 hour. 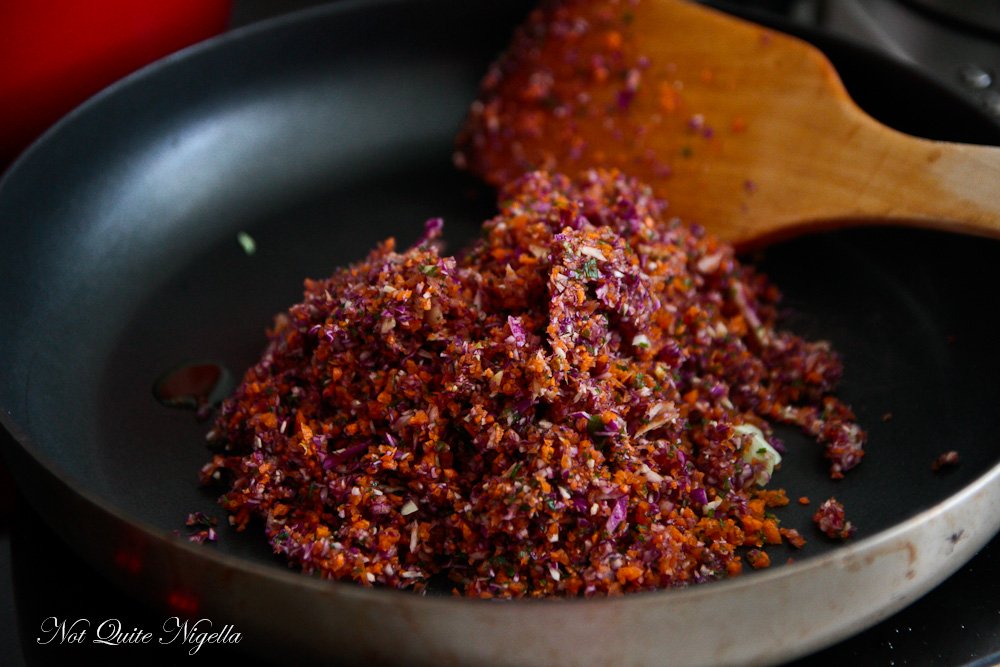 Step 2 - While it is resting, make the vegetarian filling as it needs to cool completely. I put all of the peeled ingredients in a food processor (although I don't bother peeling the carrots) and process until you get a fine texture. Heat a frypan on medium to high heat and cook the filling until it softens - it takes about 5-8 minutes. Taste for seasoning and add some salt and pepper according to taste. Allow to cool completely.

Step 3 - If you're making the pork and ginger filling, do the same and add everything into the food processora and process until you get a paste. I usually cook a little of the filling to check for seasoning and add salt and pepper if necessary. 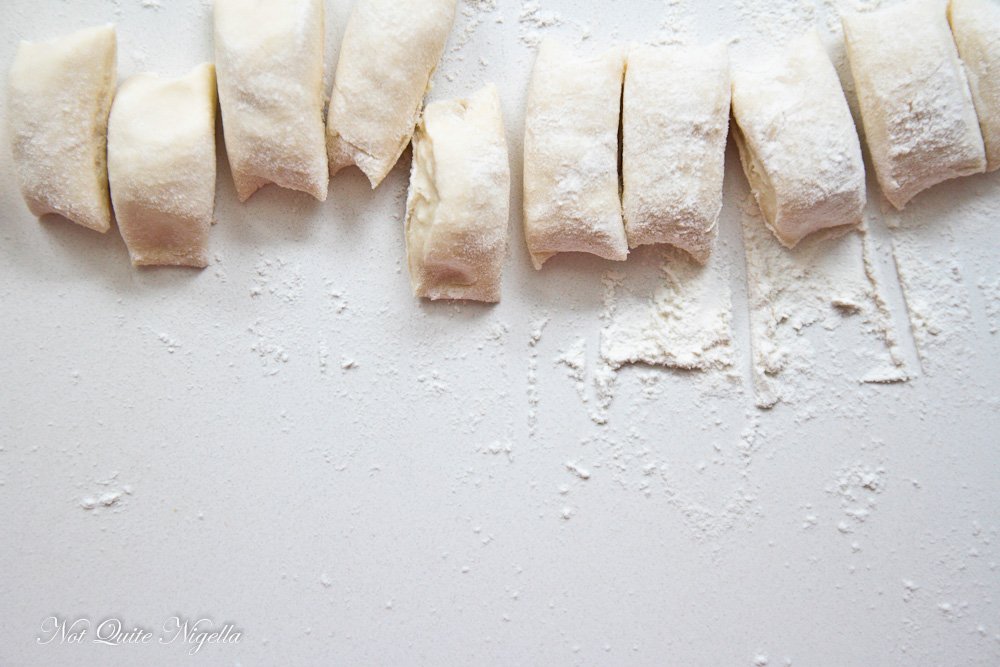 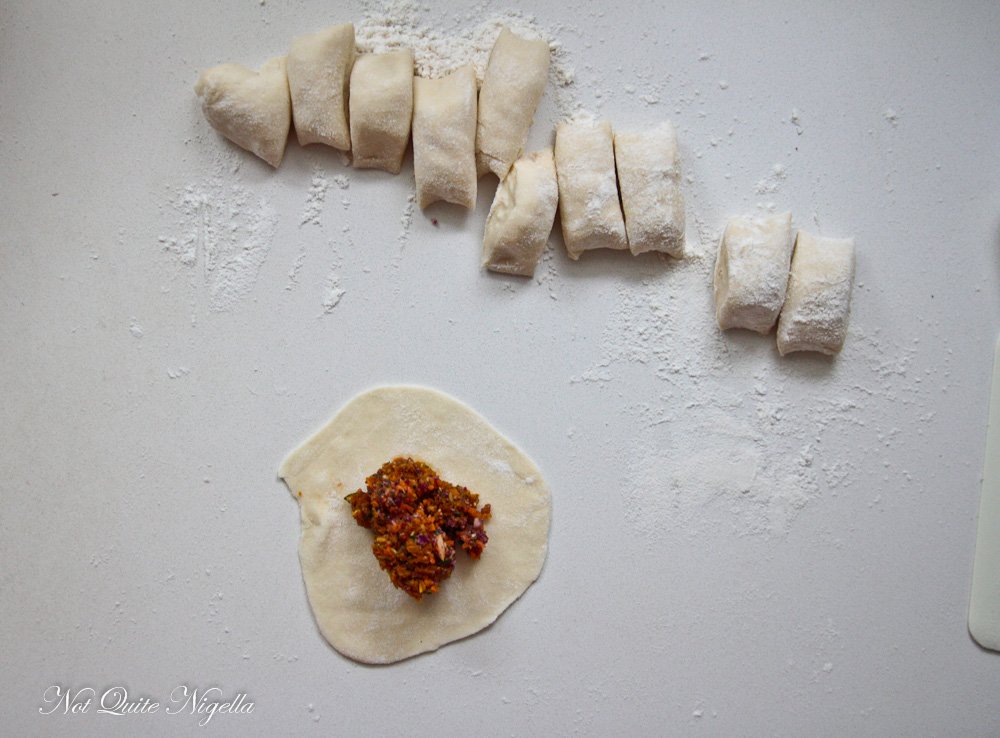 Step 4 - Flour a clean surface and a large baking tray. Put a kettle of water onto boil and a pot of water fitted with steamers. Take one log and cut it into 12 even pieces. Roll out into circles of dough. Fill with about a teaspoon of filling and then pleat. You can make round or long ones - whatever you fancy really. 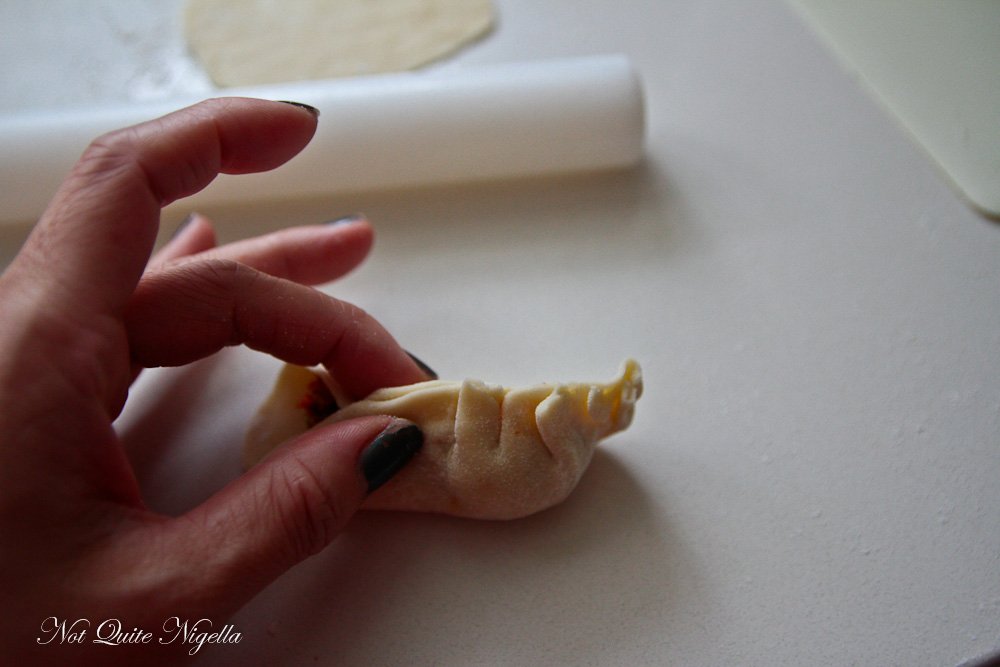 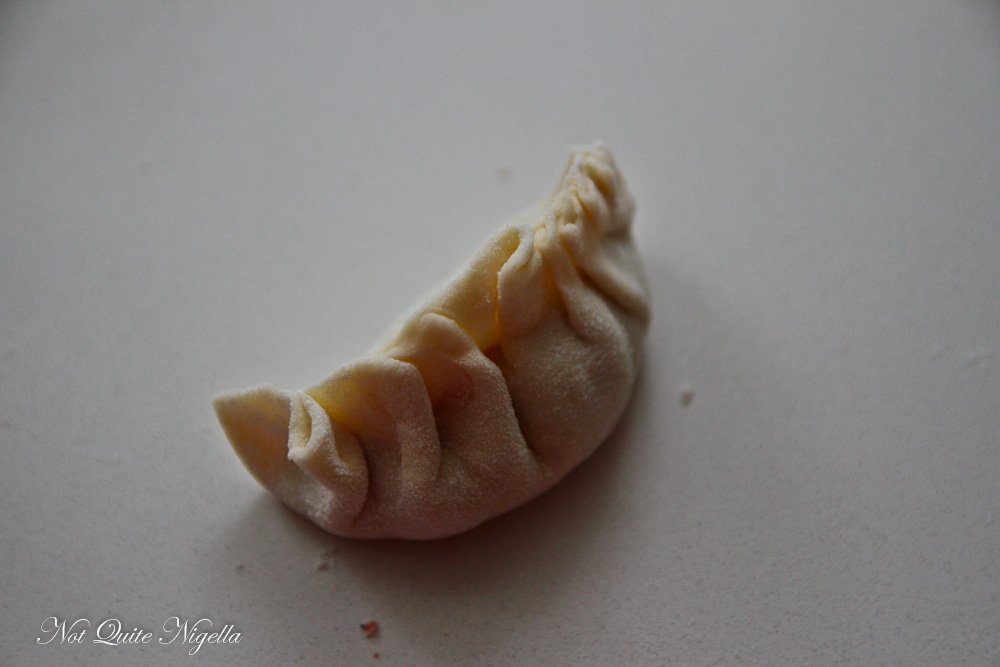 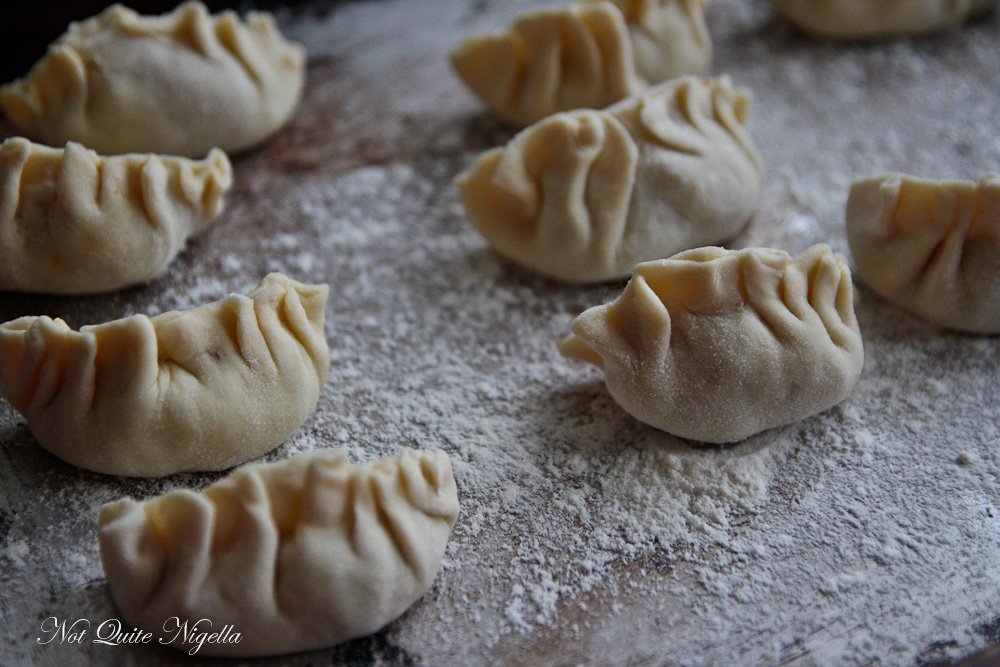 Step 5 - Place the dumplings in the steamer (using some parchment or grease the base so that they don't stick) and steam for about 8 minutes until done. 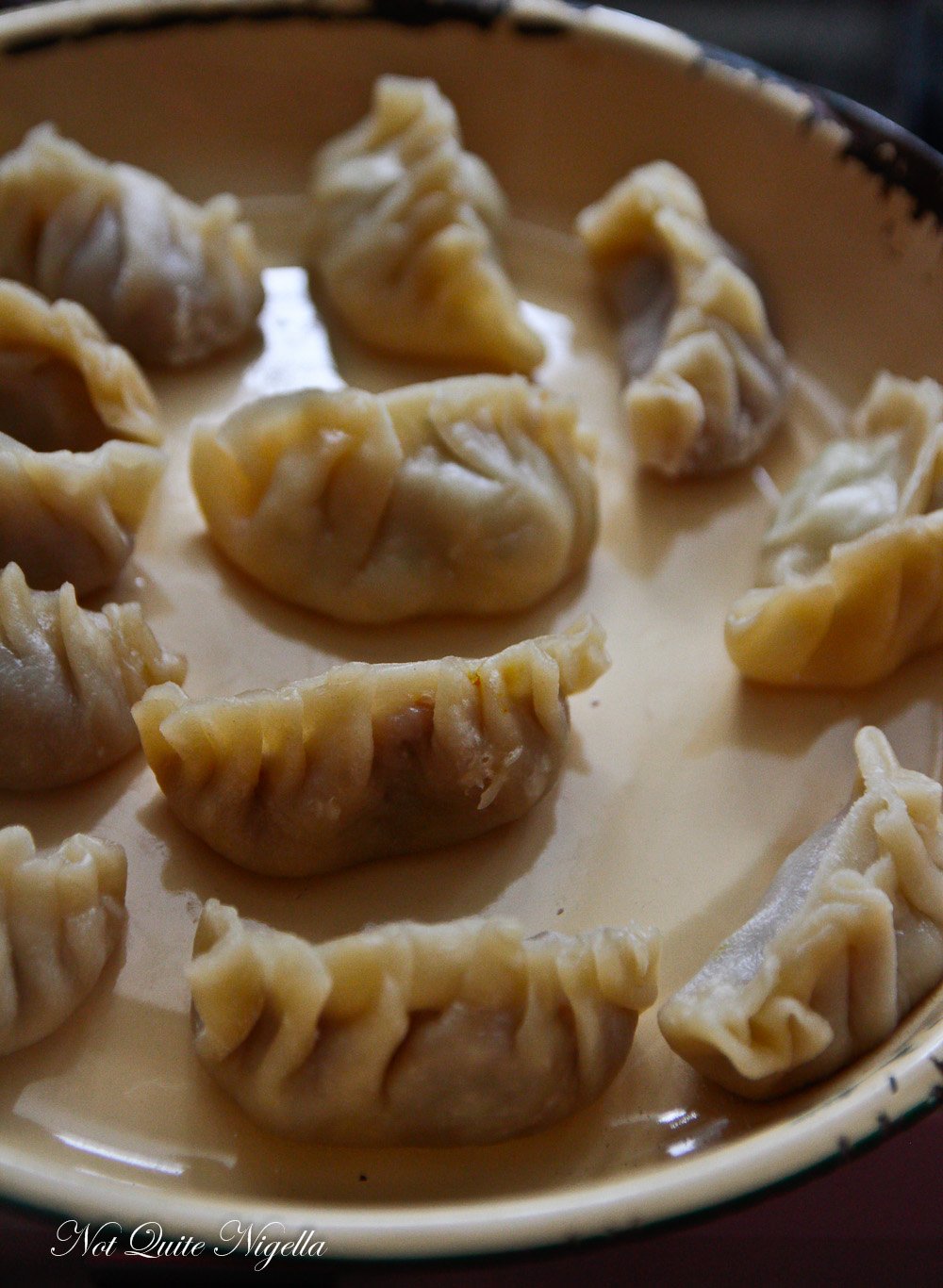 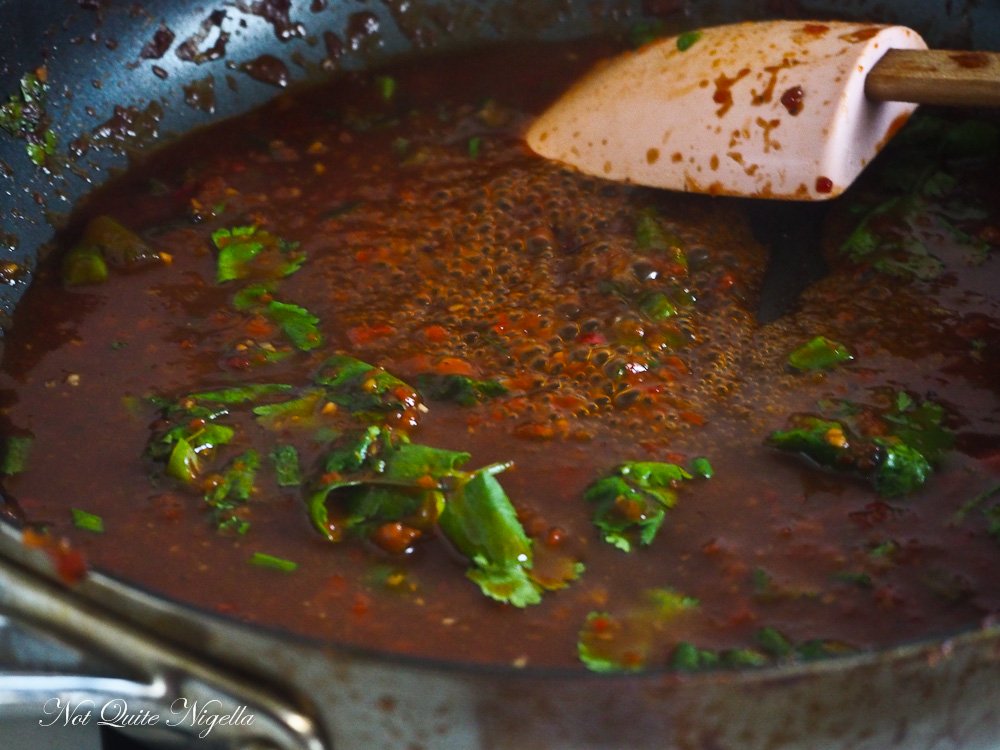 Step 6 - Add all of the chilli sauce ingredients into the frypan (I just wiped clean the one used for the vegetables) and simmer for about 5-7 minutes until thickened. Add the steamed dumplings and gently toss so that they are coated. Serve with extra green onions and coriander if you want.