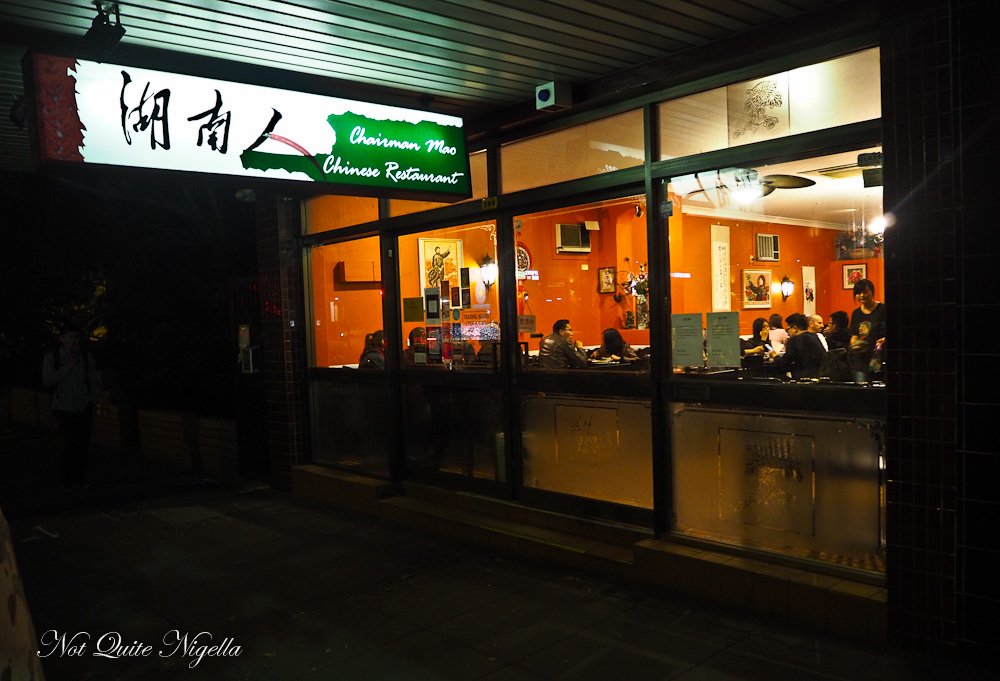 Sometimes my predilection for seeking meals far and wide means that I often neglect to visit places on my own turf. Take Chairman Mao for instance, within walking distance of where we live. The Hunanese restaurant was often overlooked when we were looking for Chinese food to satisfy my father's patriotic obsession for Chinese food. 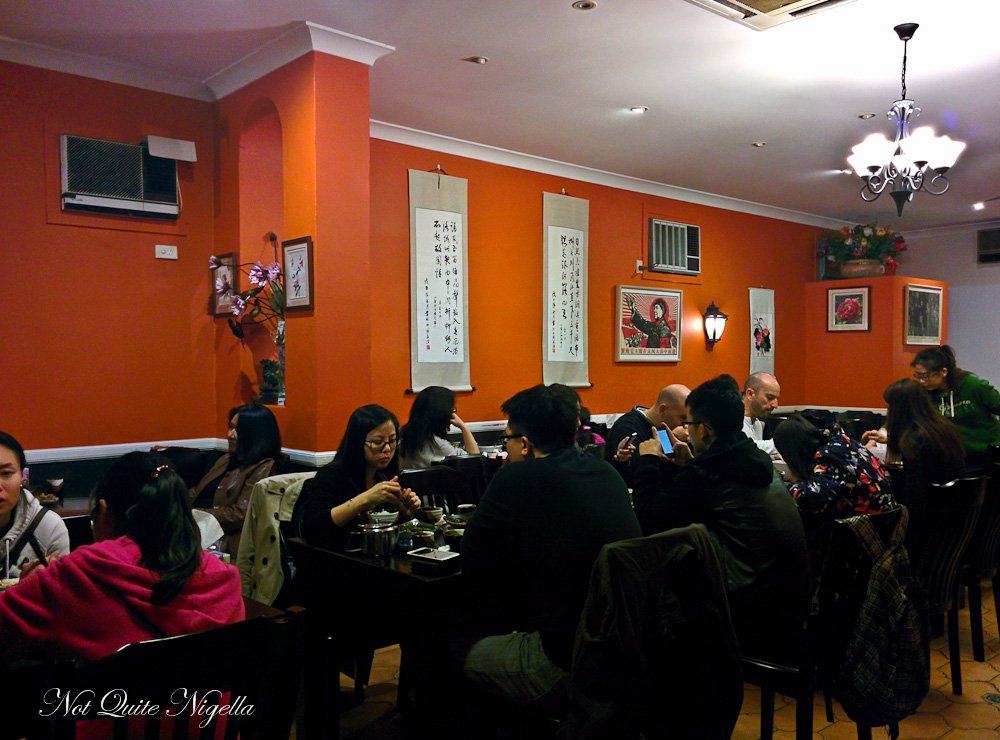 Chairman Mao has been open for many years and despite growing up in Kensington, this is our first visit. I mean what twisted mind actually goes far afield for a meal instead of just down the street? Oh right, that's me! Posters of Chairmao Mao decorate the walls of the restaurant as well as framed reviews. They seem to have lost our booking but find a table for us anyway. 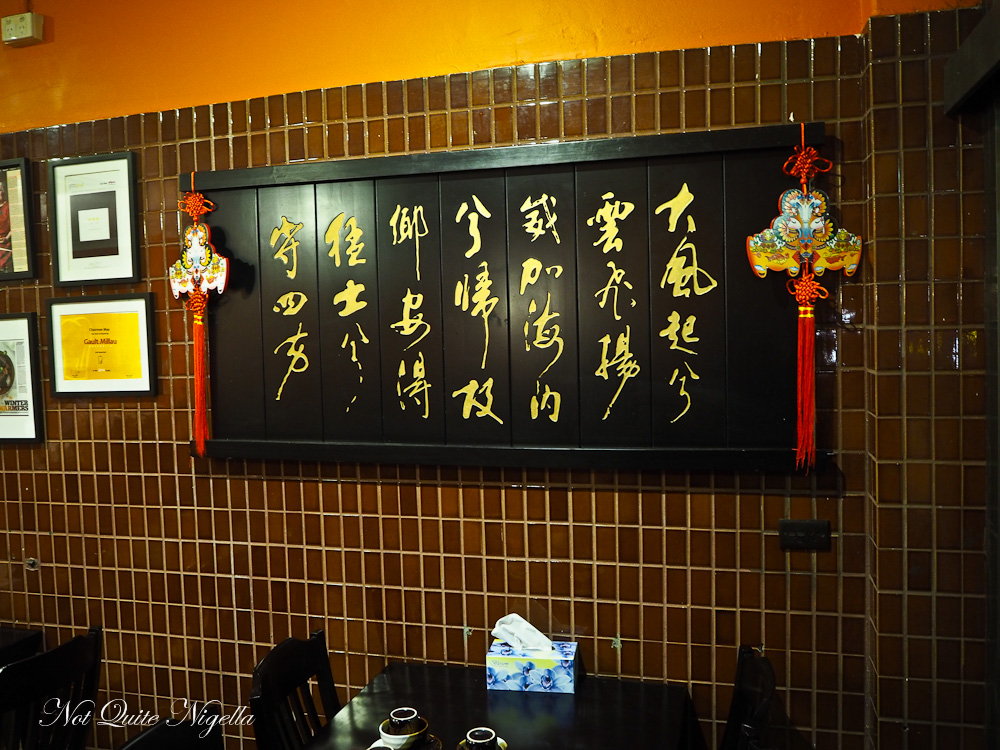 Hunanese food is spicy and is said to be even hotter than Szechuan employing the use of fresh chillies over peppercorns. The resulting cuisine is bold flavoured, oily and spicy and involves a lot of variety and vegetables due to the area's rich agricultural resources. 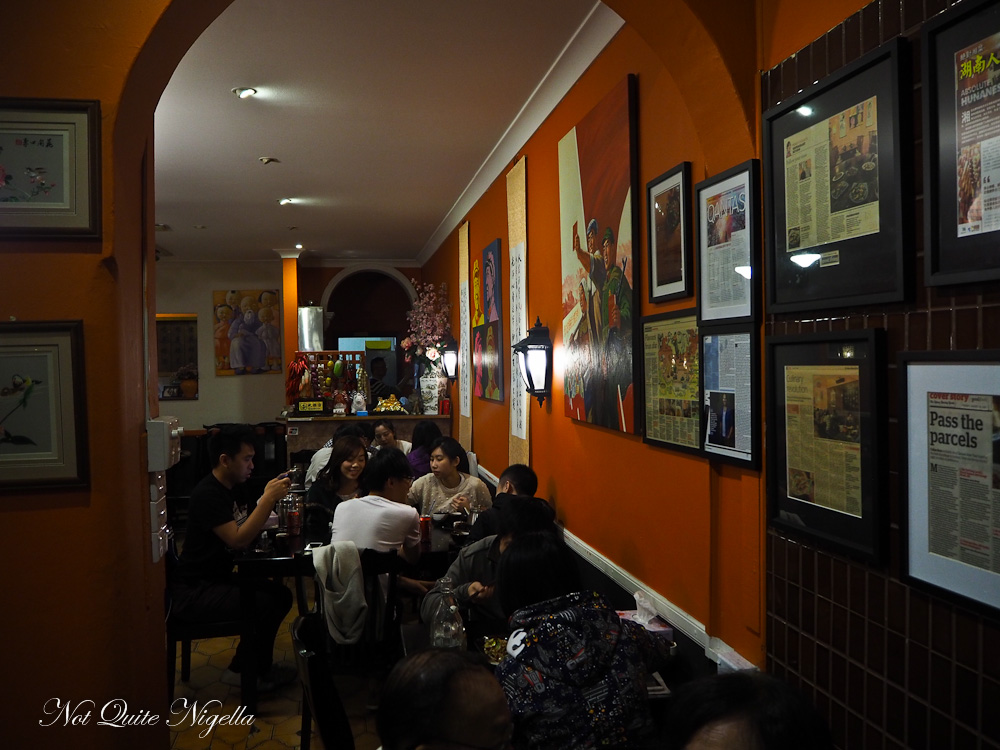 "Are you hungry?" I ask my parents. My mother looks at my father who looks back sheepishly. You see he eats his dinner at 4:30 (and sleeps at 8:30pm and rises at 5am) so 6:30 is way beyond his dinnertime. "I had a little something," he says before adding that he really tried hard by having a late lunch. 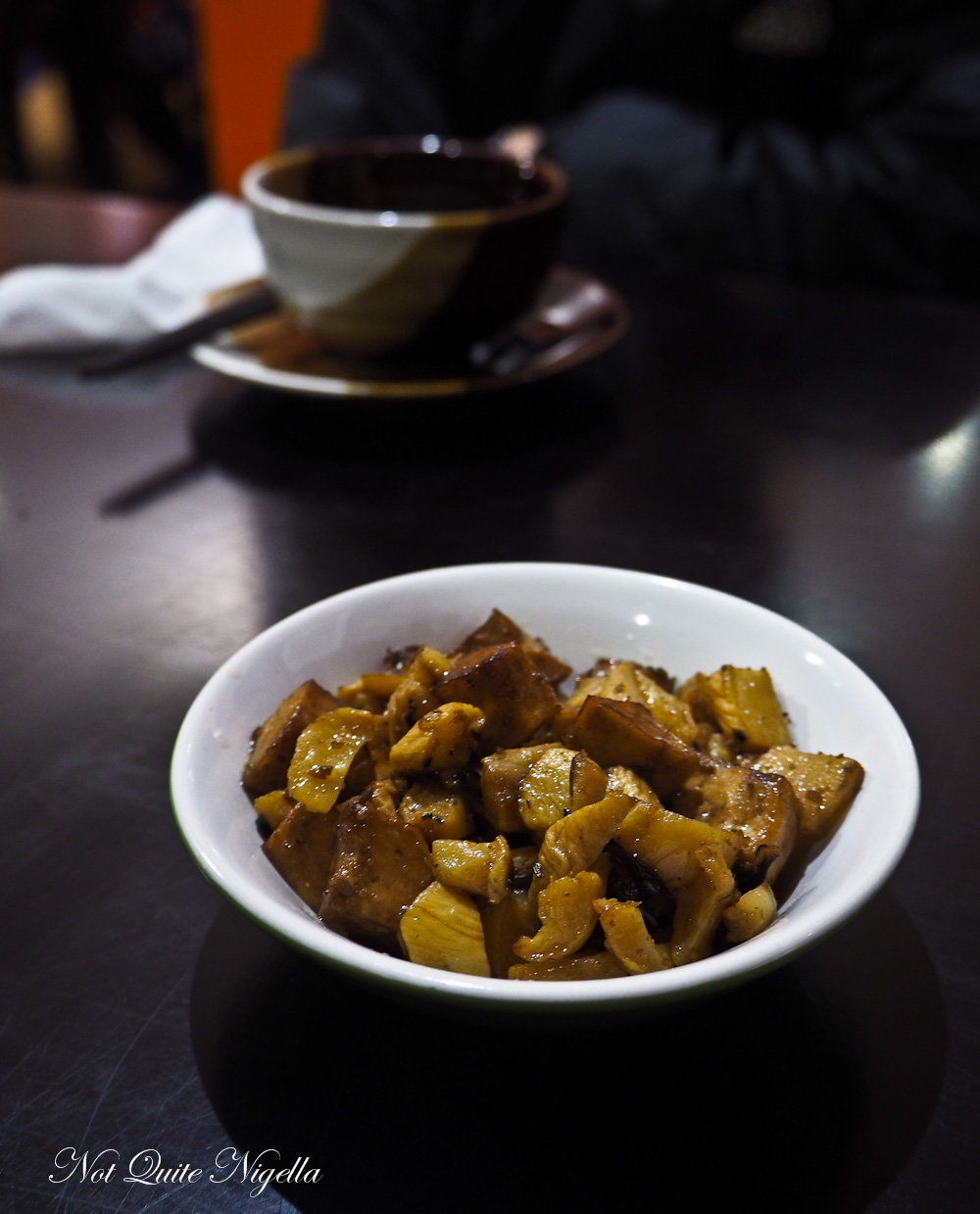 We nibble on some tasty seasoned tofu and radish bites while the food arrives. Except my father, he's not really that hungry! 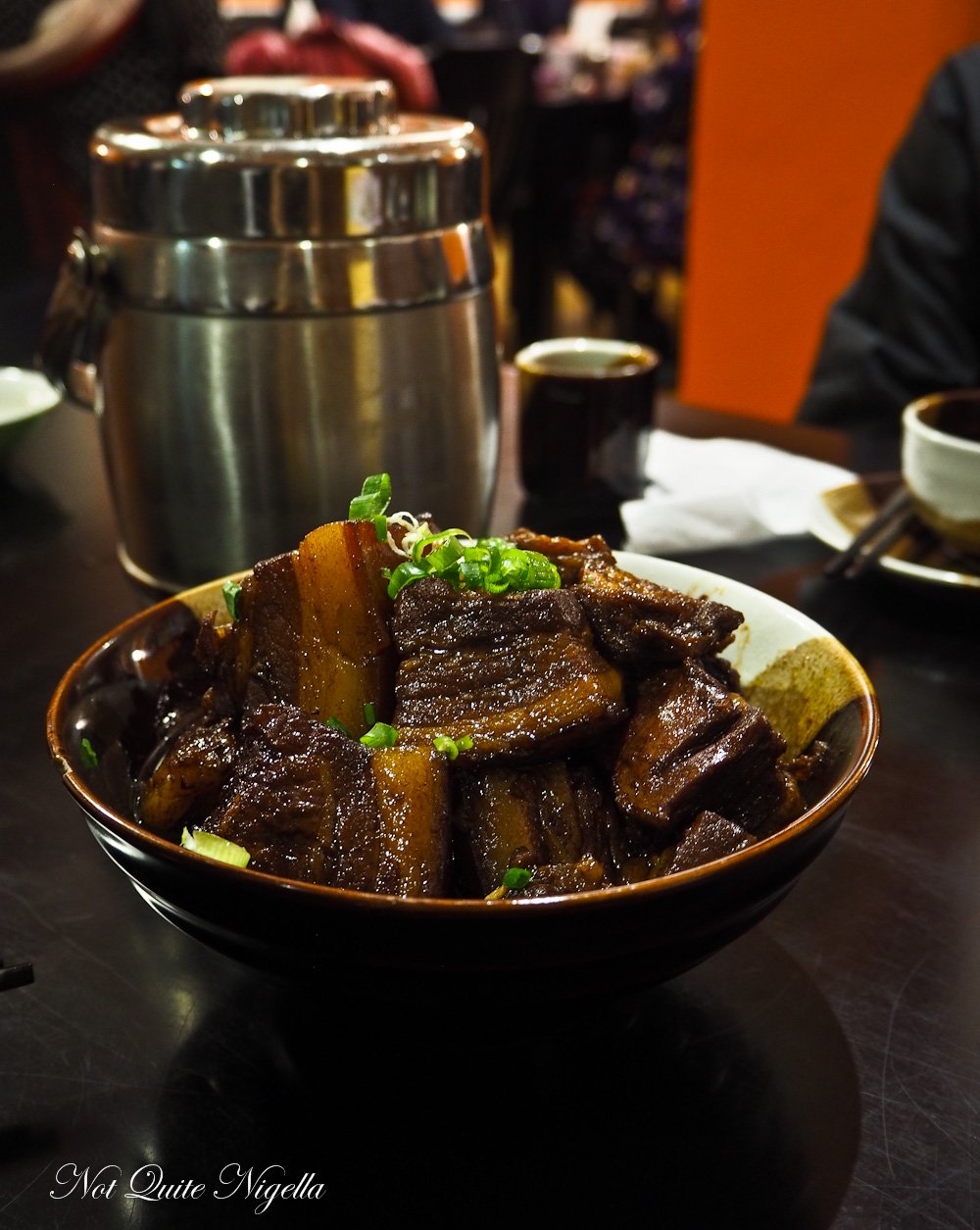 I've made a version of this before and it's not for the faint hearted. Or those that fear oil. In fact the reason why it took us so long to go here is because friends have said that there is a lot of oil in the dishes. Nowhere is it more true than with this pork belly dish. Obviously pork belly is a jellied, fatty rich cut and that is its beauty but this dish is a celebration, indeed an ode to wobbly bits. The sauce has a thick layer of oil sitting on top. The pork itself is deliciously soft and melting and reminds me of the pork inside zongzi. 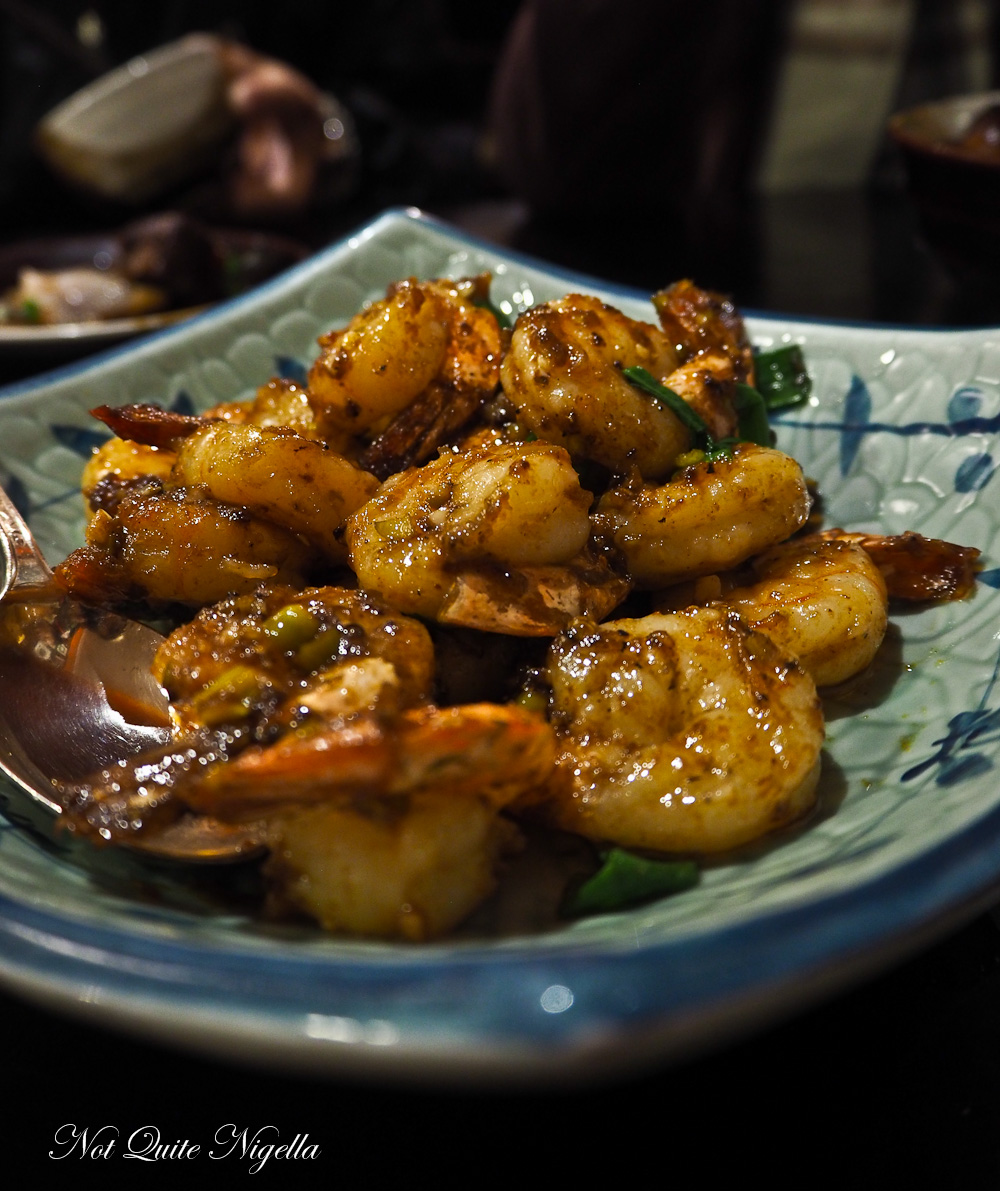 And then comes the parade of spicy dishes. The prawns are cooked well so that they retain a juicy, toothsome texture and the spice is immediately apparent with a ma-la or numbing quality. They're so flavoursome that we all gobble these up before remembering that we have many more courses. 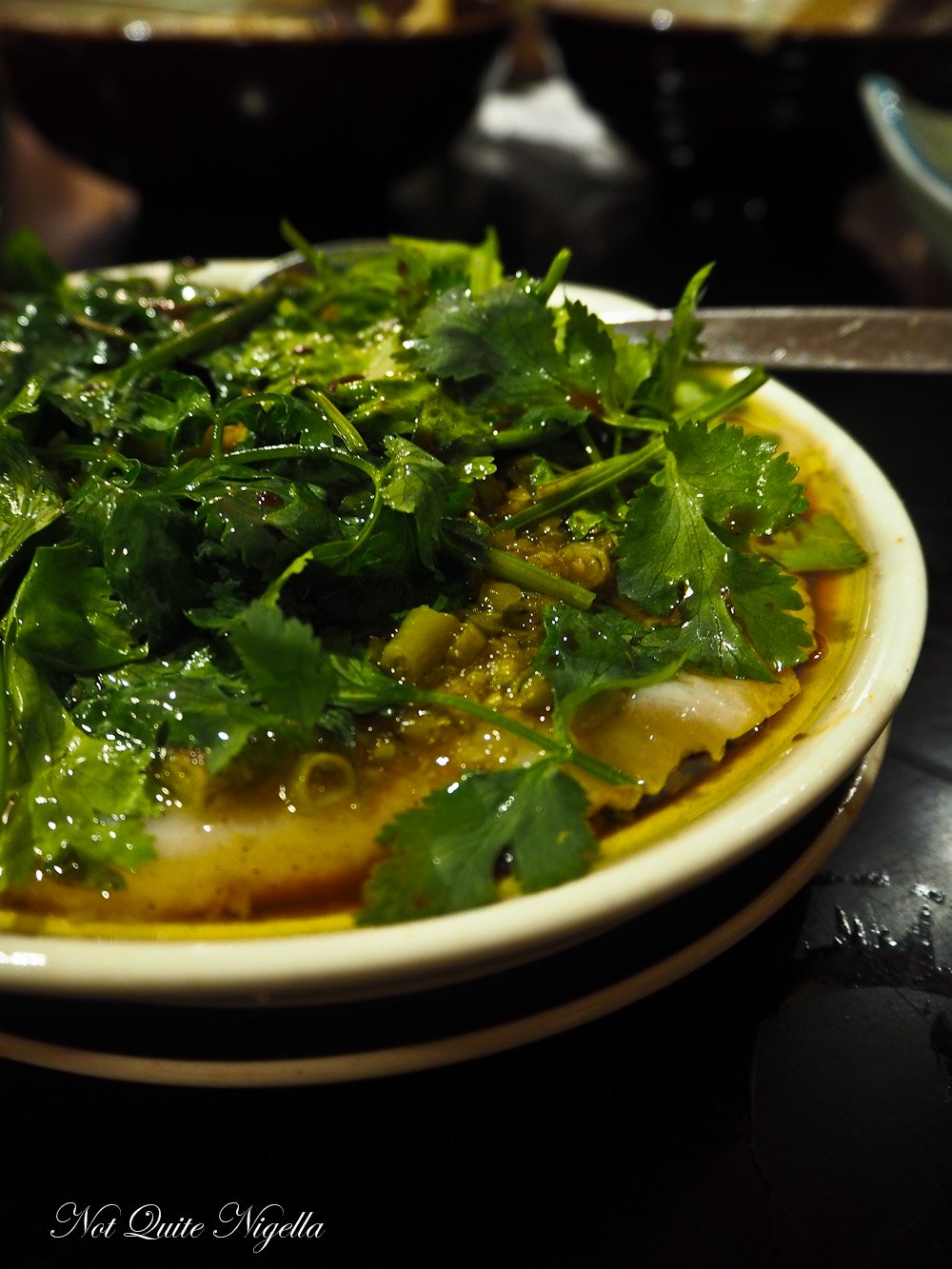 The steamed fish is unlike what you might receive at a Cantonese restaurant. Here it comes as soft fillets under a blanket of picked green onions and coriander. It's a full flavour blast with the fish milky soft in contrast to the toppings and there's the ever present layer of oil on top. 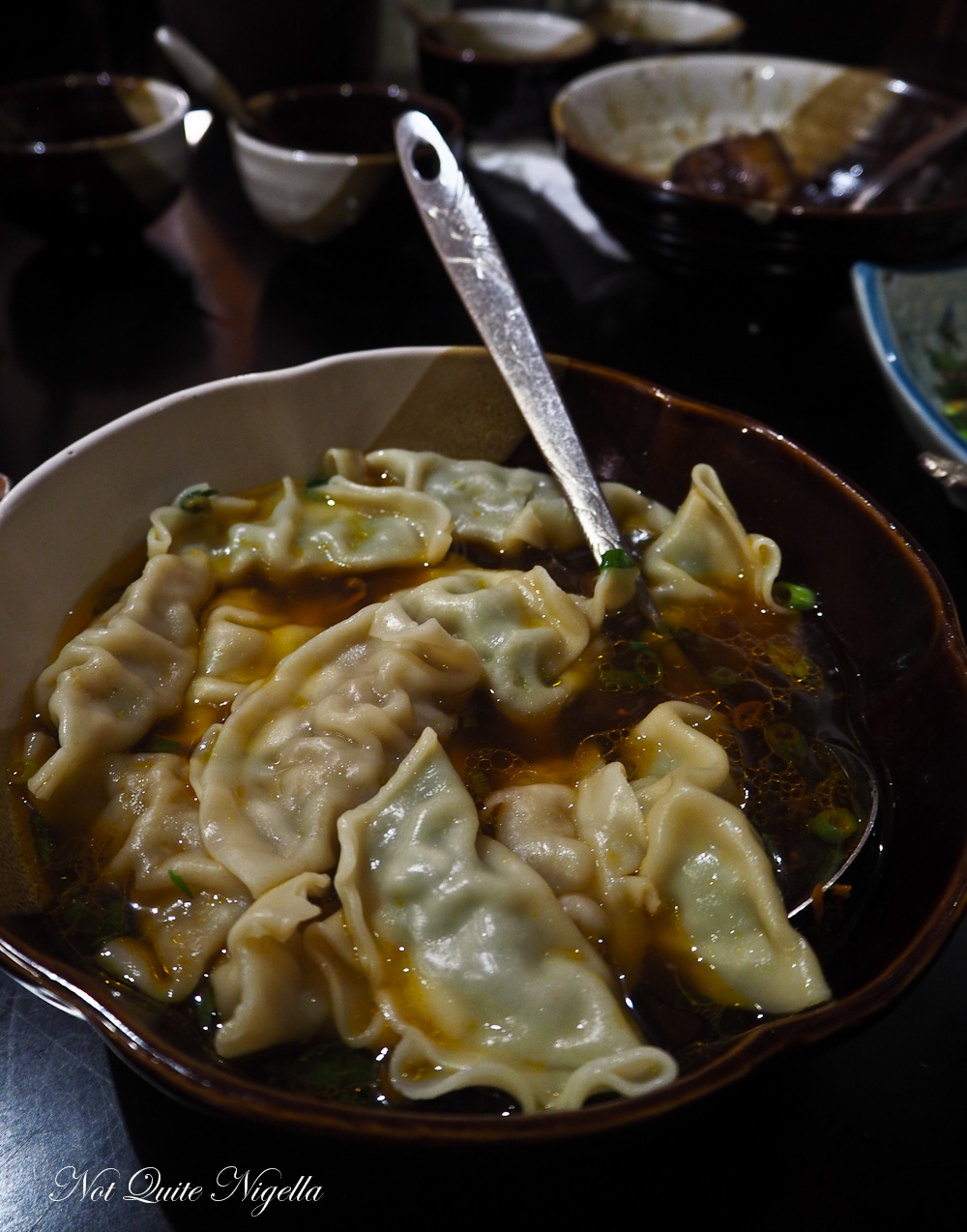 There's a treasure trove of dumplings swimming in this spicy and sweet broth. Although it is said to be hot and sour it's really sweet more than sour. Knowing Mr NQN's love for dumplings, my mother asks him which he prefers: these or the ones from Shanghai eateries. They're actually quite different, these have more vegetables in them and a thinner skin whereas the other ones are mostly meat with a studier, thicker skin. Mr NQN expresses a desire to come by here and avail himself of this $13.80 bowl of dumplings next time I go overseas. 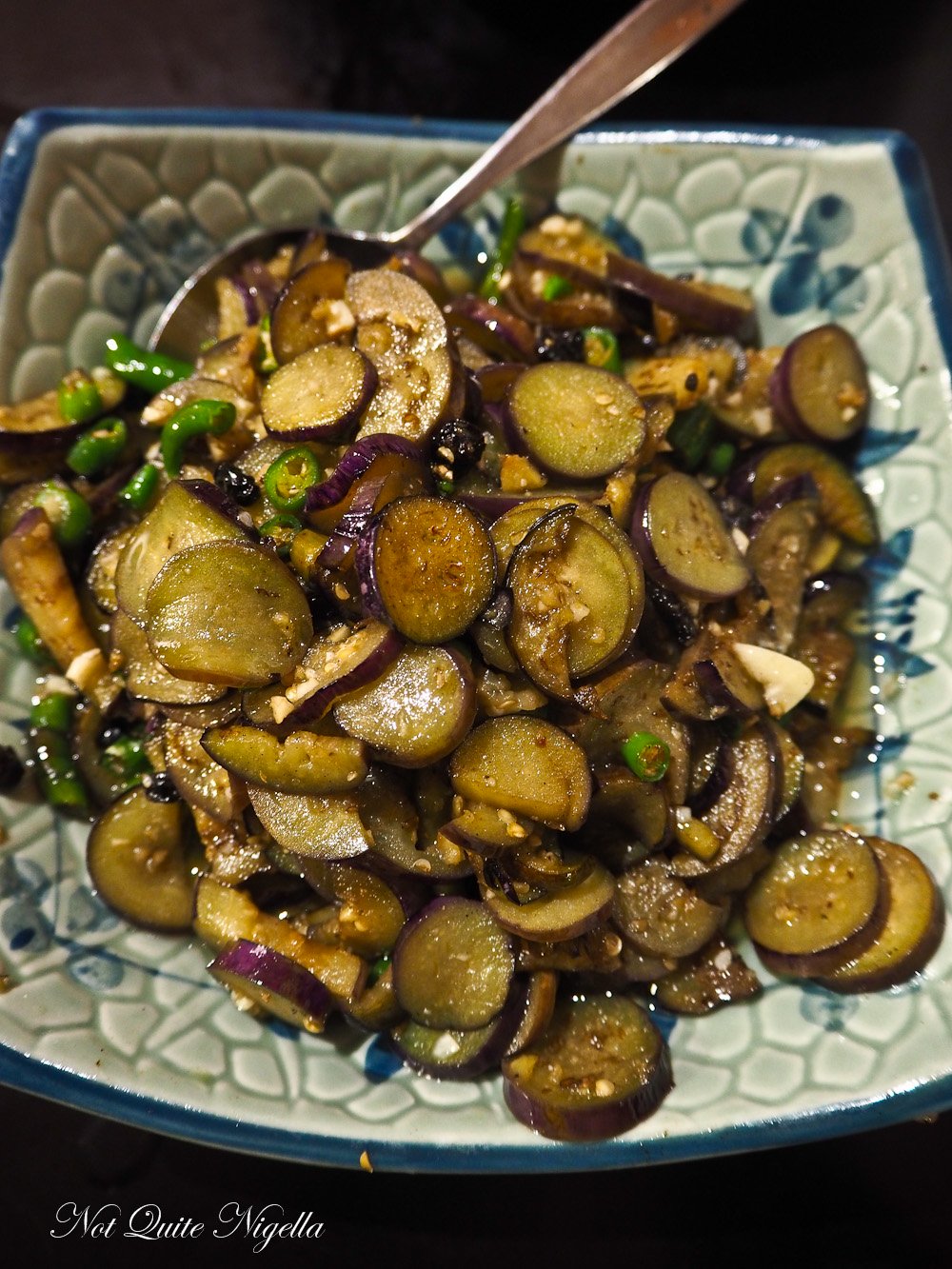 The presentation of the eggplant is certainly different to what we've had before. Sliced up as coins, the eggplant is briefly stir fried so that it doesn't have that melty, creamy texture and it has more bite. It's spiced up with plenty of green chillies. 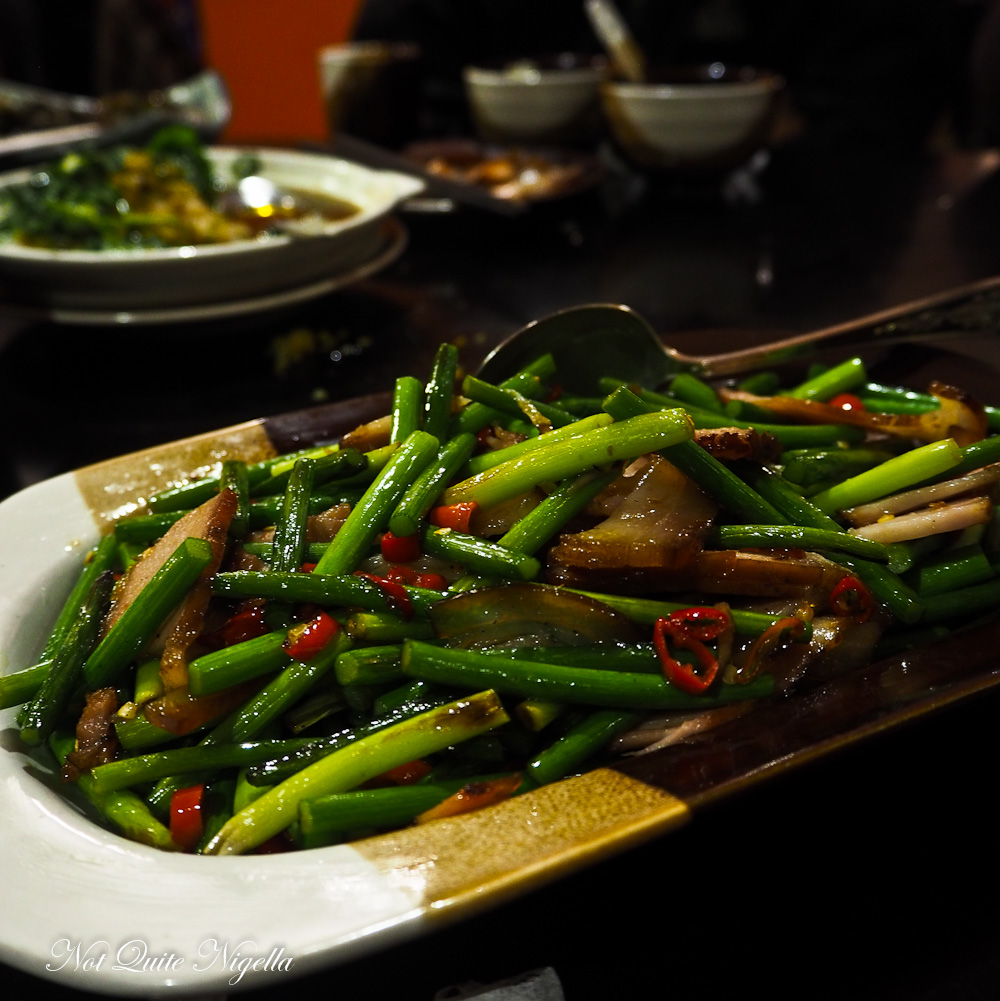 We had almost forgotten about this dish as it arrived so far after the rest of the dishes. The meat is house smoked and is a popular Hunanese dish. The smoked pork is aromatic and strongly smokey. It's also quite dry and salty but we like the chilli garlic chives. And given that we had eaten our fill 20 minutes before this didn't really have a chance to being polished off. 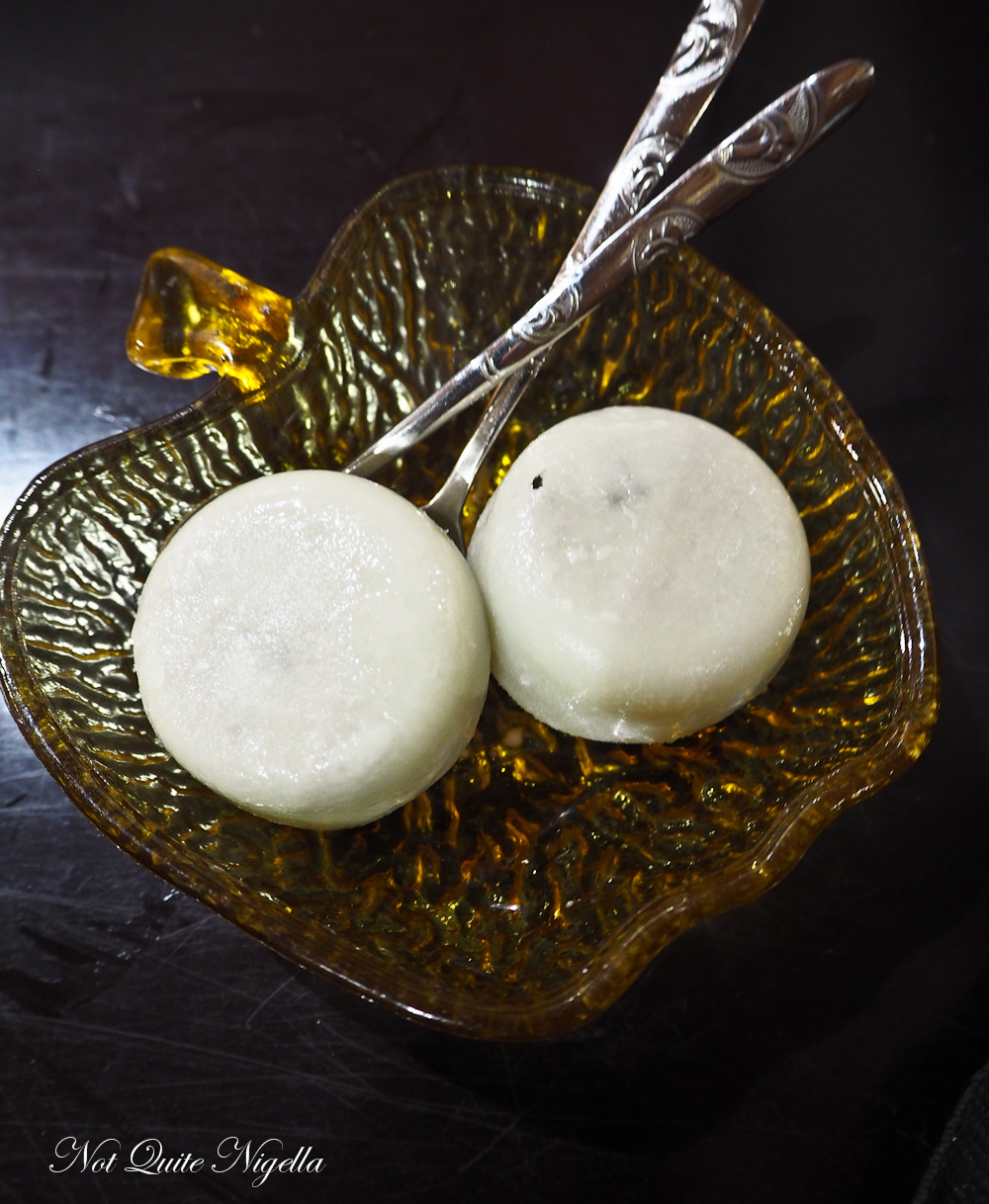 Dessert in Chinese restaurants isn't really a strong point. There's just one here and it's an ice cream mochi. I've had plenty of these in Japan, even the supermarket variety is pretty decent with a nice stretchy mochi. The mochi on the outside is firm and not stretchy and the black sesame ice cream inside isn't very inspiring. Perhaps we should have left the last taste to that of spicy rather than sweet.

So tell me Dear Reader, do you order dessert at Chinese restaurants? And do you eat at many local places around you? And when you dine out with your parents, what sort of food do they like? Do they prefer to eat early?

This meal was independently paid for. Sorry there are no prices but I accidentally deleted the menu pics and the receipt just had a total!