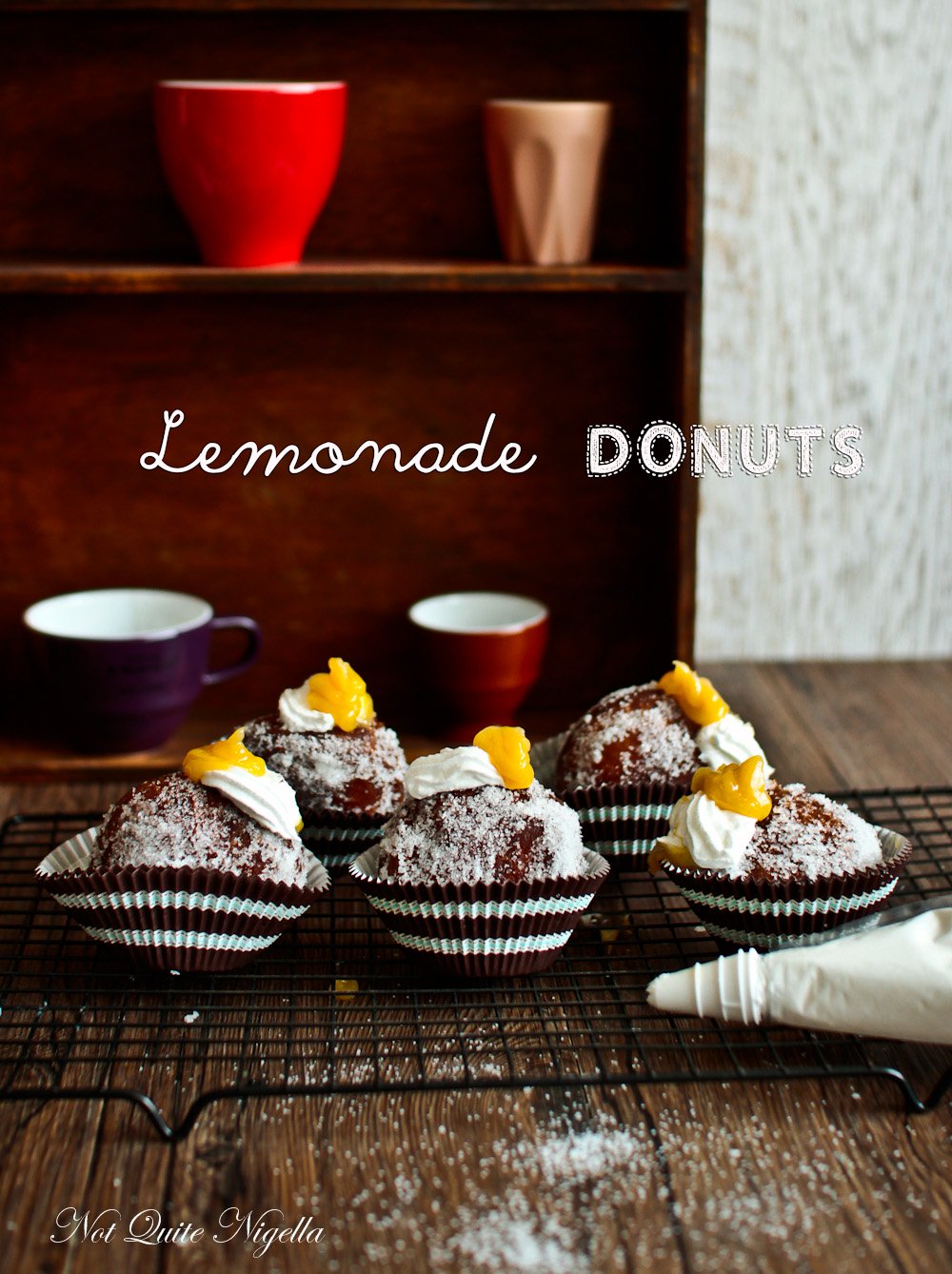 My recent donut obsession knows no bounds and this flavour combination came from greed and curiosity. These yeast donuts are filled with a zingy combination of lemon curd, sherbert and fluffy meringue filling. It's not just a lemon meringue donut, it's a lemonADE meringue donut now with extra fizz!

A lot can happen when you haven't seen friends for a few months. Girl Next Door and I have been busy working and then she went on a European trip for 7 weeks. One of the frequent topics of discussion are her dating hijinks (Dear Reader you know exactly how much I love these!). She told me about one guy that she went out with for one date.

They had been to a wine bar where they shared a bottle of wine. They were on their way back to her house and were about a block away when he started to get a bit woozy. Girl Next Door was concerned and asked him if he was ok.

"No I don't think I am," he said looking poorly. And before she could ask him another question, he hailed the taxi driving past and disappeared. She stood there, stunned and mouth agape, wondering where on earth her date had vanished to. Was he really just there? And where did he go?

The next day he texted her apologetic and mortified at his hasty and unexpected exit. But it was too little too late and just a bit too confusing for her. She felt like she had been mugged of a date and she went overseas without having that second date with him. 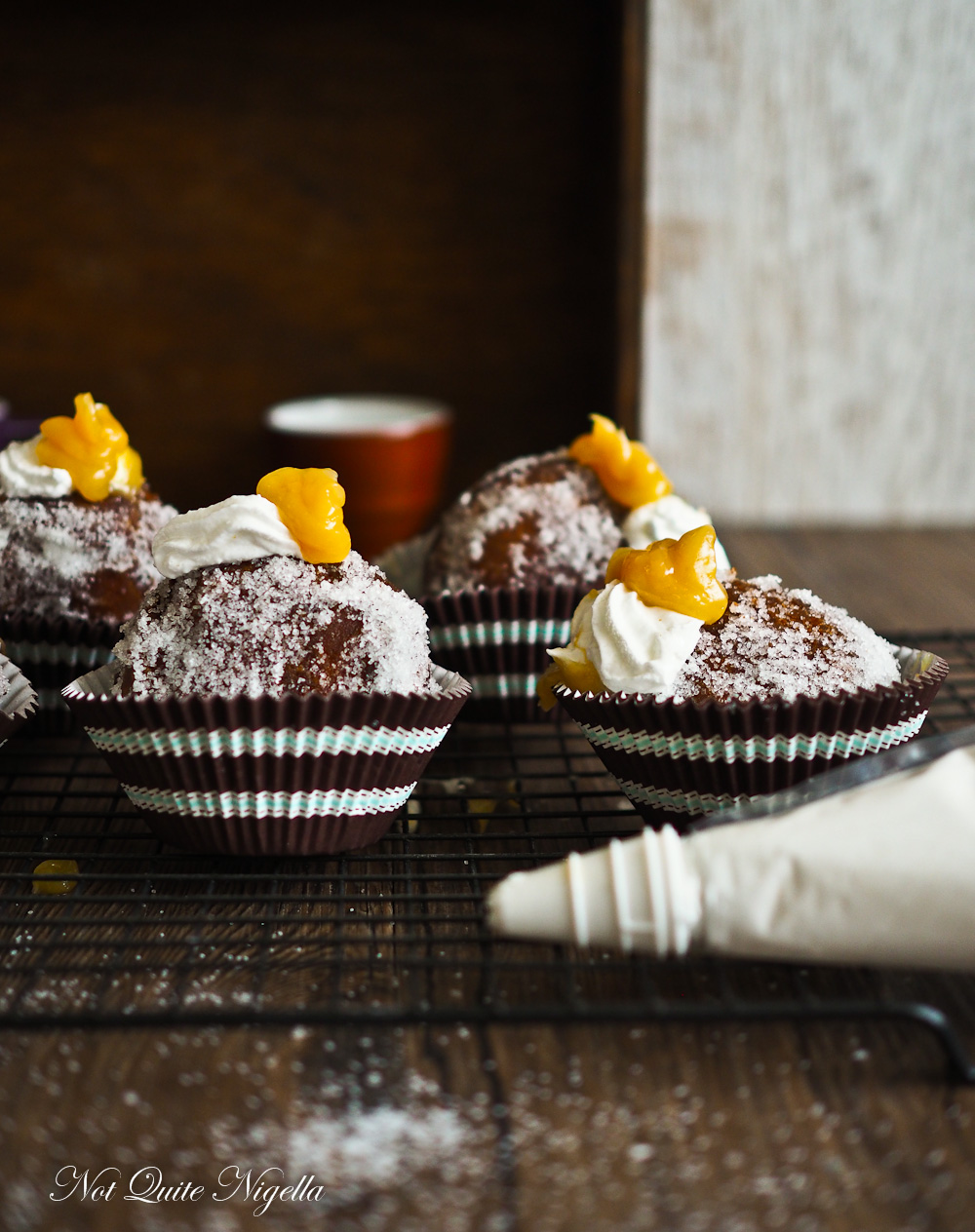 When she came back from her holiday, she alas learned that she had been retrenched and suddenly had a surfeit of time. She offered to come over and teach me some dishes that she had learned to make while overseas. And if people come over to my place they will get food. Food like these donuts.

I've been thinking about lemonade donuts for a long time. Ever since I made this lemonade cake which was a while ago. I've recently become obsessed with donuts in all forms and I've been quashing my fear of deep frying to make these (it doesn't hurt that donuts don't splatter so they're relatively low risk as far as deep frying is concerned). I wanted to make some donuts that have a lemonade like fizz and yet a soft, cushioney centre made up of lemon curd and meringue. Think lemon{ade} meringue!

And yes Dear Reader, this is a push recipe! After the strawberry and sour cream donuts, I've decided that donuts need not just one but two fillings in them and the little battle between the two fillings is what results in a total moreishness of donut. There is sherbet in the meringue which just helps it set firmer (it's basically what you use cream of tartar for anyway) and they are also rolled in sherbet sugar just to bring the lemonade flavour through.

For those of you that are deep frying phobic I beseech you to try these because there isn't any splatter when you fry these donuts. In fact you could make half a batch of these and half a batch with the sour cream and strawberry jam donuts. Just make these because they will promise eternal happiness. For your tastebuds :)

So tell me Dear Reader, what is your latest food obsession? And would an exit like that mean that you wouldn't go on a second date? Are you deep frying phobic?

The video that nobody asked for...

P.S. Do you remember how I made a haggis a couple of months ago? I finally got around to editing the video and halfway through I realised that nobody really cares about a haggis video. But oh well I put it up anyway because just maybe some of you might want to see it in gory detail...

Step 1 - Place the flour, yeast and sugar in the bowl of an electric mixer fitted with a dough hook and mix on low speed to combine. Add the buttermilk and butter and knead until it becomes elastic.

Step 2 - Line a tray with parchment. Flour a bench lightly and roll dough out until an inch thick. Using a small 5cm/2inch cutter dipped in the flour, cut out rounds and place them an inch apart on the tray. Place in a warm, draught free area to rise. 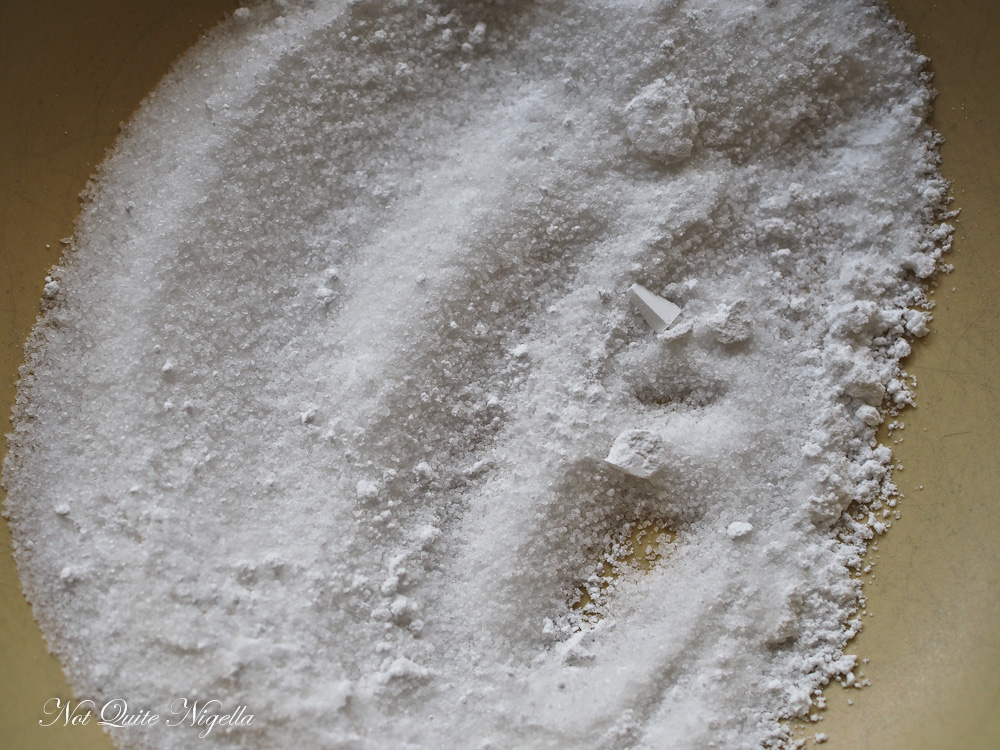 Step 3 - Heat oil in a large heavy based pot until it reaches 185C/365F. Place the donuts in making sure not to overcrowd the pan. Cook for 1 minute on each side. Drain on a double layer of absorbent paper. Empty the sugar into a wide plate with a rim and mix with two sachets of the sherbert. Roll the donuts in the sherbert sugar. 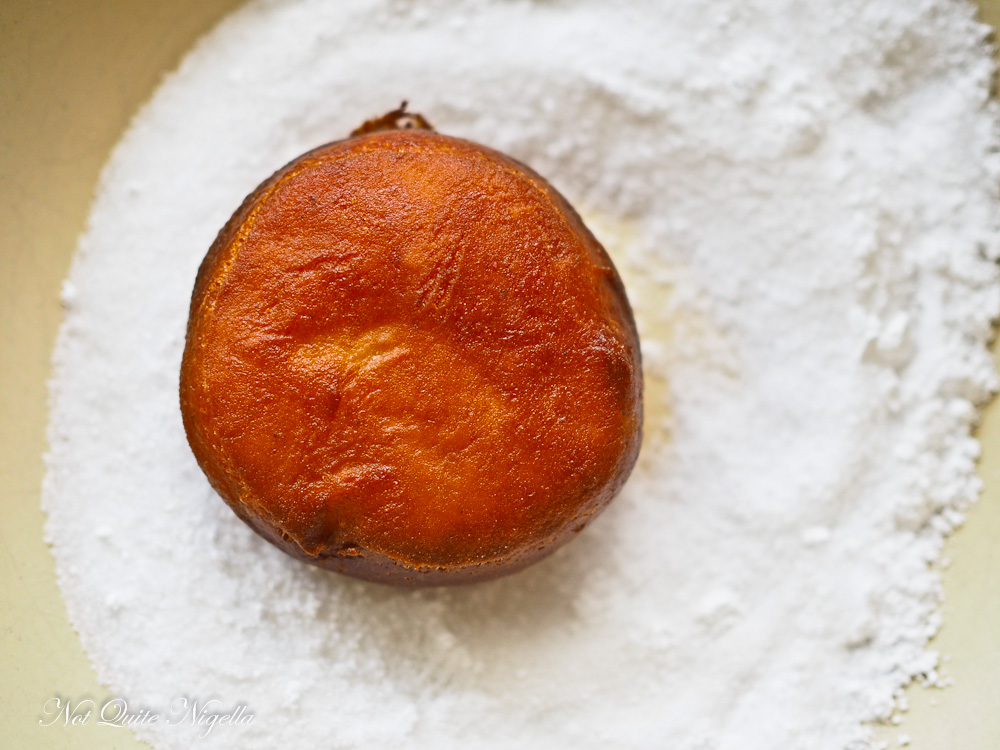 Step 4 - Fit an electric mixer with a balloon whisk and whip the egg white until foamy. Gradually add in the 1 cup of caster/superfine sugar and whip until soft peaks form. Add the third sachet of sherbert and it will make the egg white even stiffer and robust. 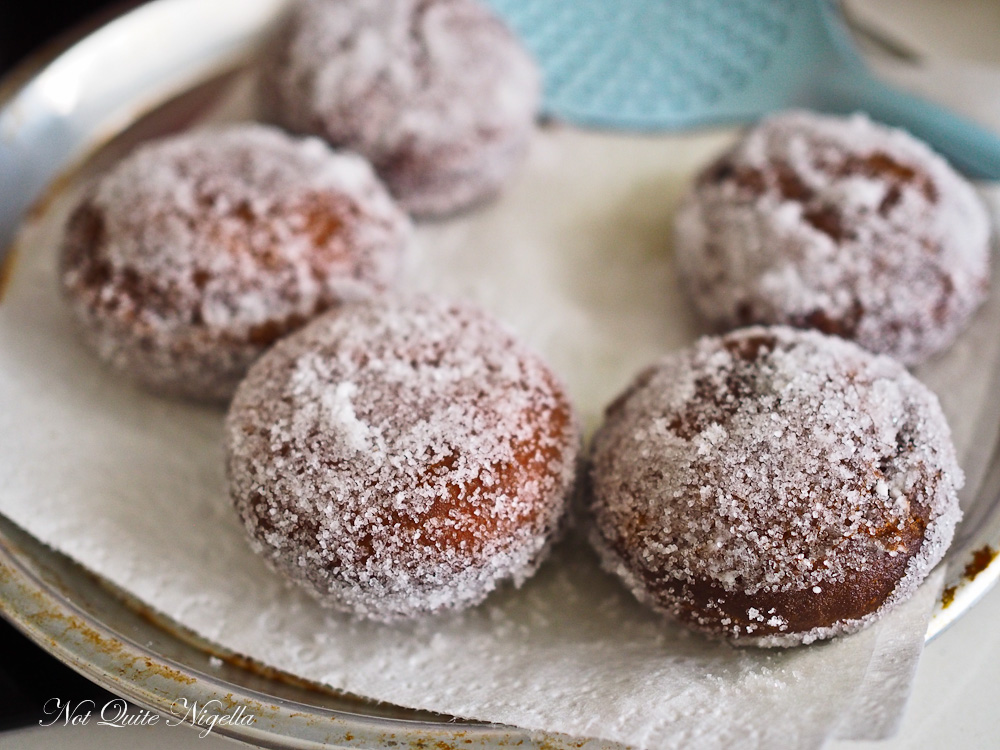 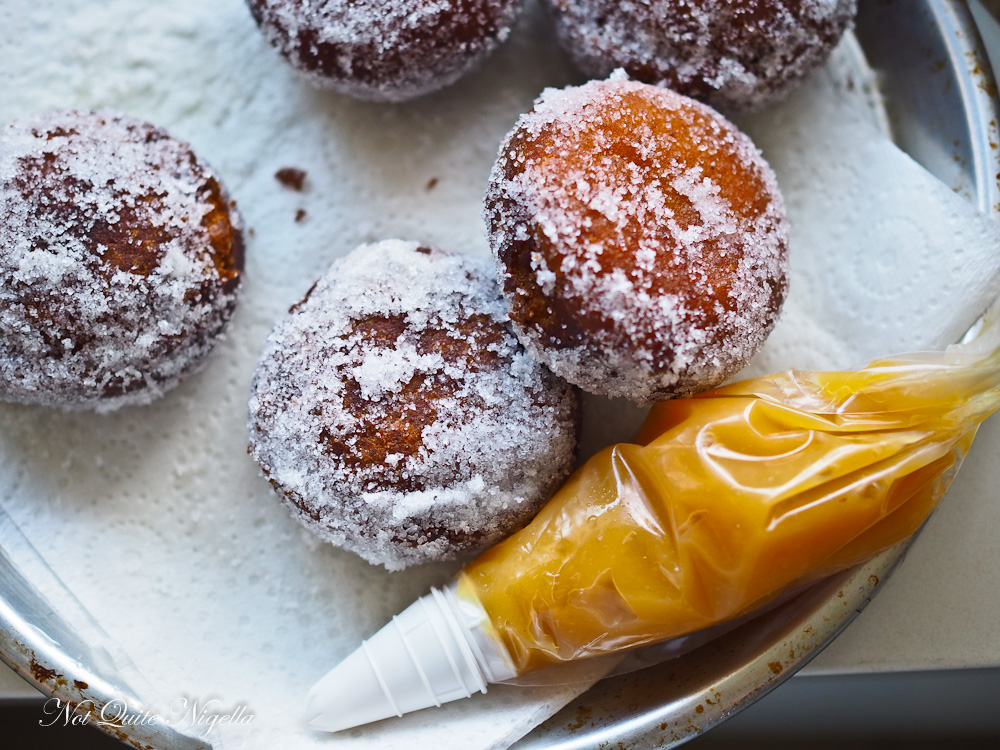