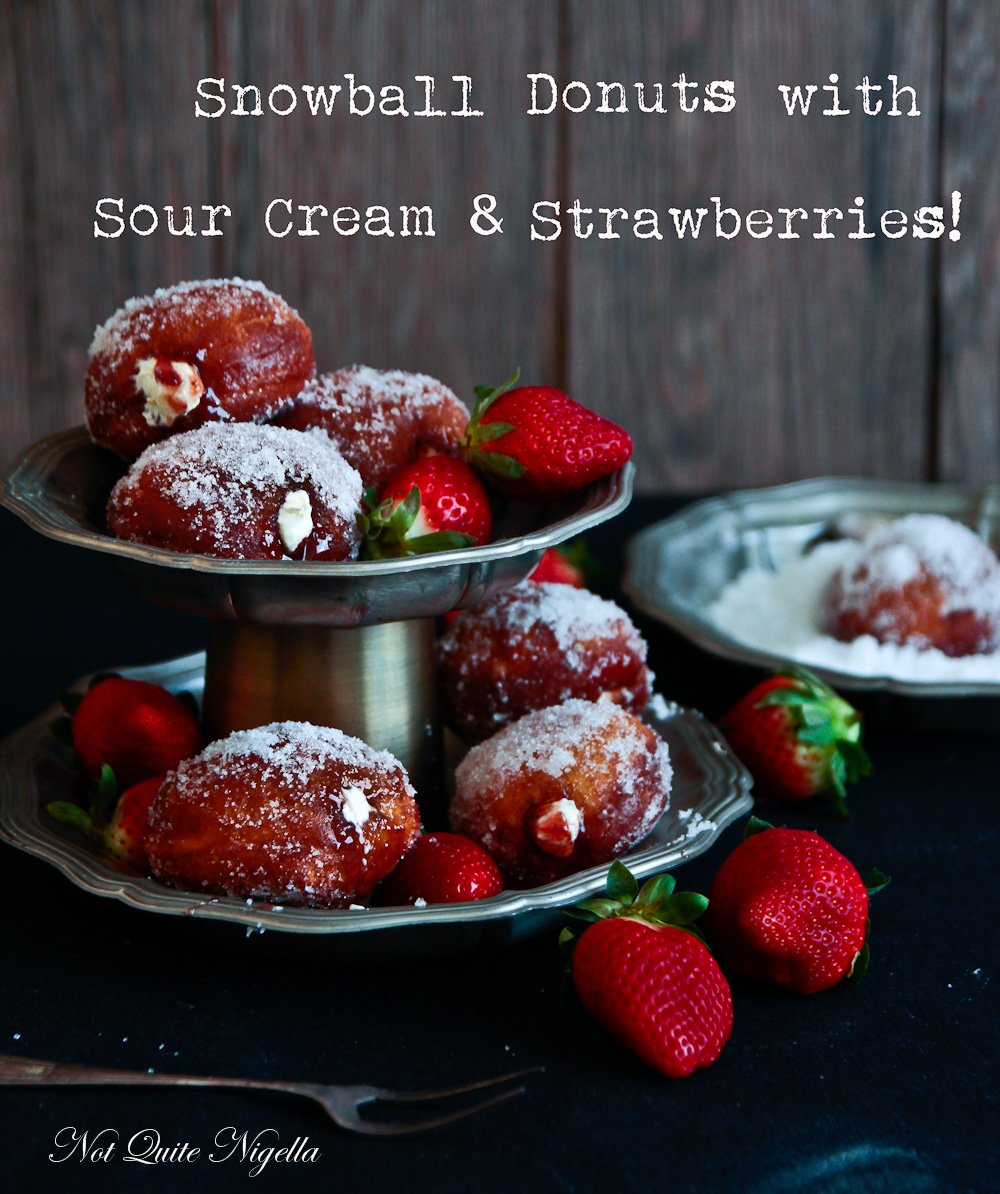 Donuts, the latest obsession sweeping through Sydney are a definite treat. Sure there are baked donuts but there is nothing quite like a deep fried yeasted donut made with a slow overnight rise. Even better is when these freshly fried donuts are filled until popping with a heavenly injection of sour cream and strawberry jam. Don't say you weren't warned...you may not be able to stop at one! ;)

Dear Reader I recently had lunch with an American chef. Chefs tend to have some great stories and Chef Charles Charbonneau from the Hilton chain in Hawaii didn't disappoint. He required a bit of prodding though and it was only when Cynthia said to him, "Tell us about the time you were the chef for President Clinton" that the story came out. And it was a goody.

Chef Charles served as Bill Clinton's chef for a period of one month in 1994 while Clinton was president. His job was to cook for the Clinton family while they were holidaying at Martha's Vineyard. When he first accepted the offer, the secret service asked for his social security number, no more no less and from that they could do a thorough background check. Just before he started work Clinton's doctor called Charles and asked him to keep three things away from the President. These three things were: Diet Coke, coffee and chocolate. Charles was frank with the doctor and said, "If the President wants any of these things, I'm going to give them to him. I'm his chef!". 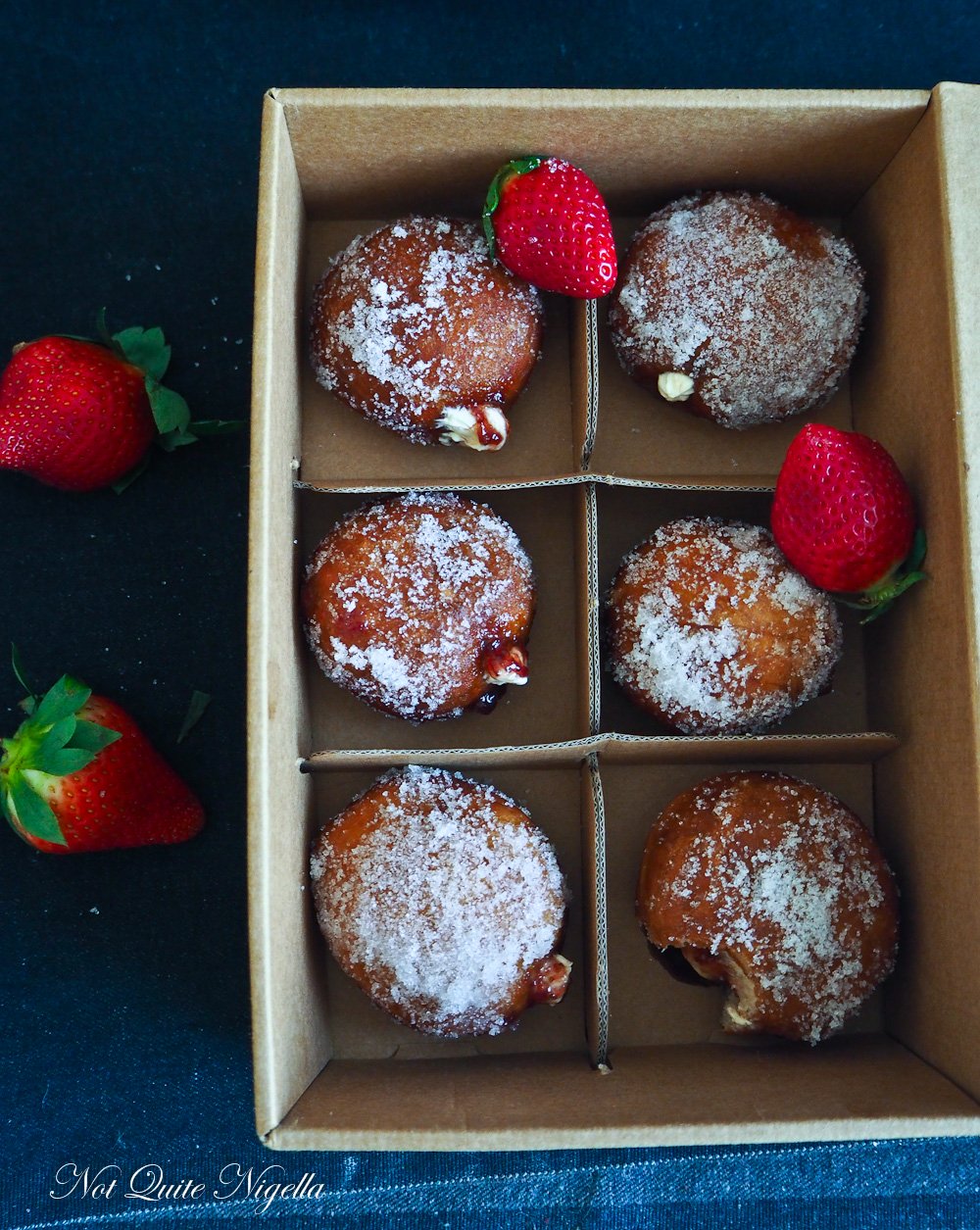 Hilary spoke to Charles about the family's routine. Breakfast was usually a bagel and according to Hilary, "We can handle that." He was to make lunches and dinners unless they were eating out and they usually did so twice a week. They were healthy eaters and he developed a menu to reflect this. The Clintons were easy going despite the entourage and security.

The biggest issue was not them but the numerous interns that populated the adjacent property. Charles told us that they were usually the children of wealthy families connected to the political parties and as a result they could be "spoilt brats". Certainly the Clinton staffers warned him against the interns who would just help themselves to food, even if it was set aside for the First Family! 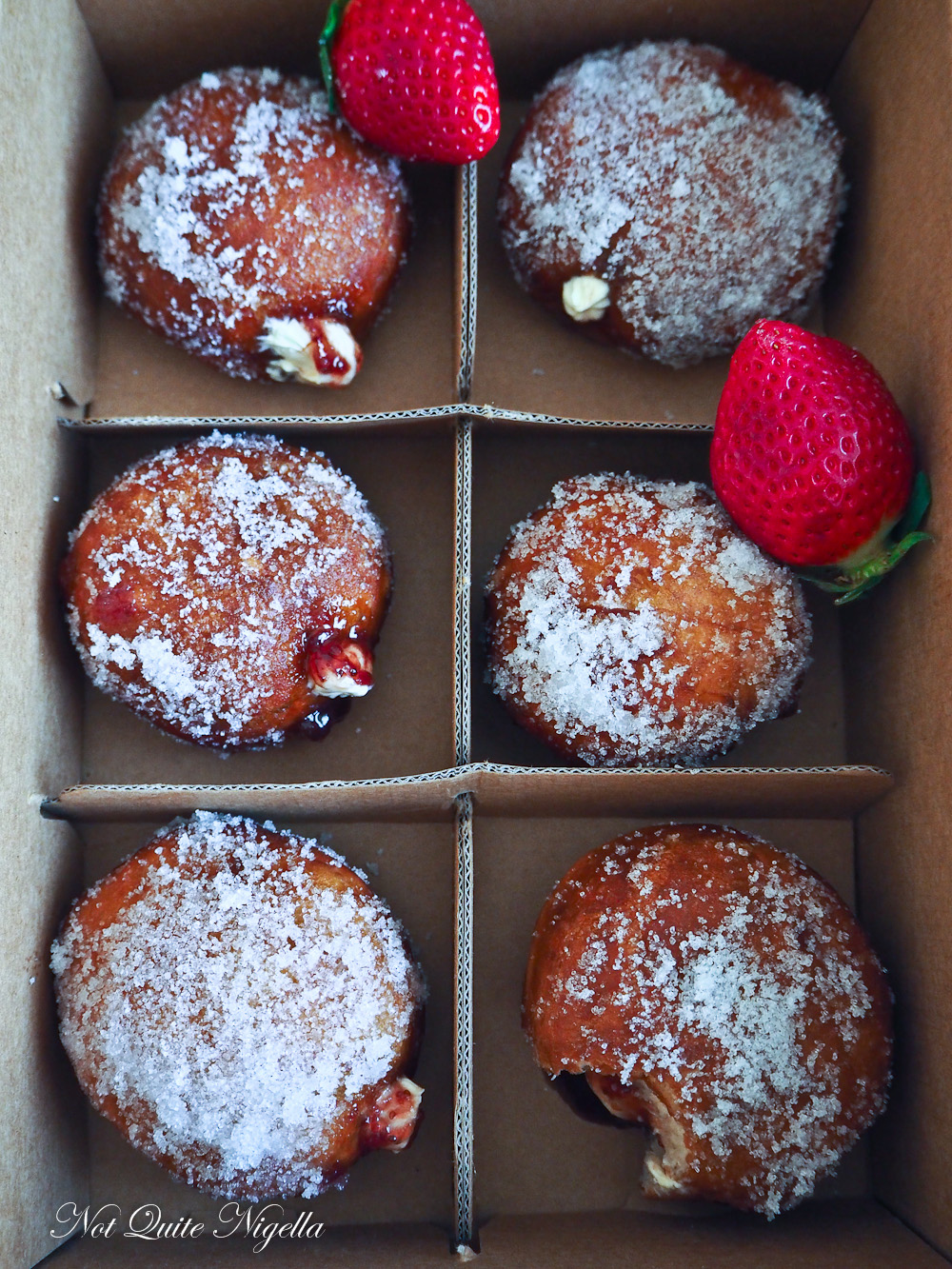 For me there is a food that I would be unable to resist and it is one that my doctor might have to warn Mr NQN about. And it is these donuts. It seems that donuts are the new cupcake/macaron and I usually buy or bake them but I had the sudden urge to make donuts based on one ingredient that sat in my fridge - sour cream. It was a tub of which I only needed one tablespoon so there was plenty left. And I wanted to use it on something fantastic. The thought came to me one night - donuts filled with strawberry jam and sour cream!

When I was rolling these in sugar, it occurred to me that they looked like they were rolling in snow, hence the name snowball donuts. At the risk of sounding totally immodest I have to admit that these were scarily good. Like call your doctor and get your doctor to call your family and regulate the consumption of these because there is nothing quite like the light, fluffy donut and the thick, creamy centre against the sweet strawberry jam. Eat at your own risk - or pleasure! These are treats that are meant to be savoured.

So tell me Dear Reader, what three items would you have to be kept away from? And are you a donut fan? What is your favourite filling or topping and do you prefer baked or fried? And are you team donut, cupcake or macaron? 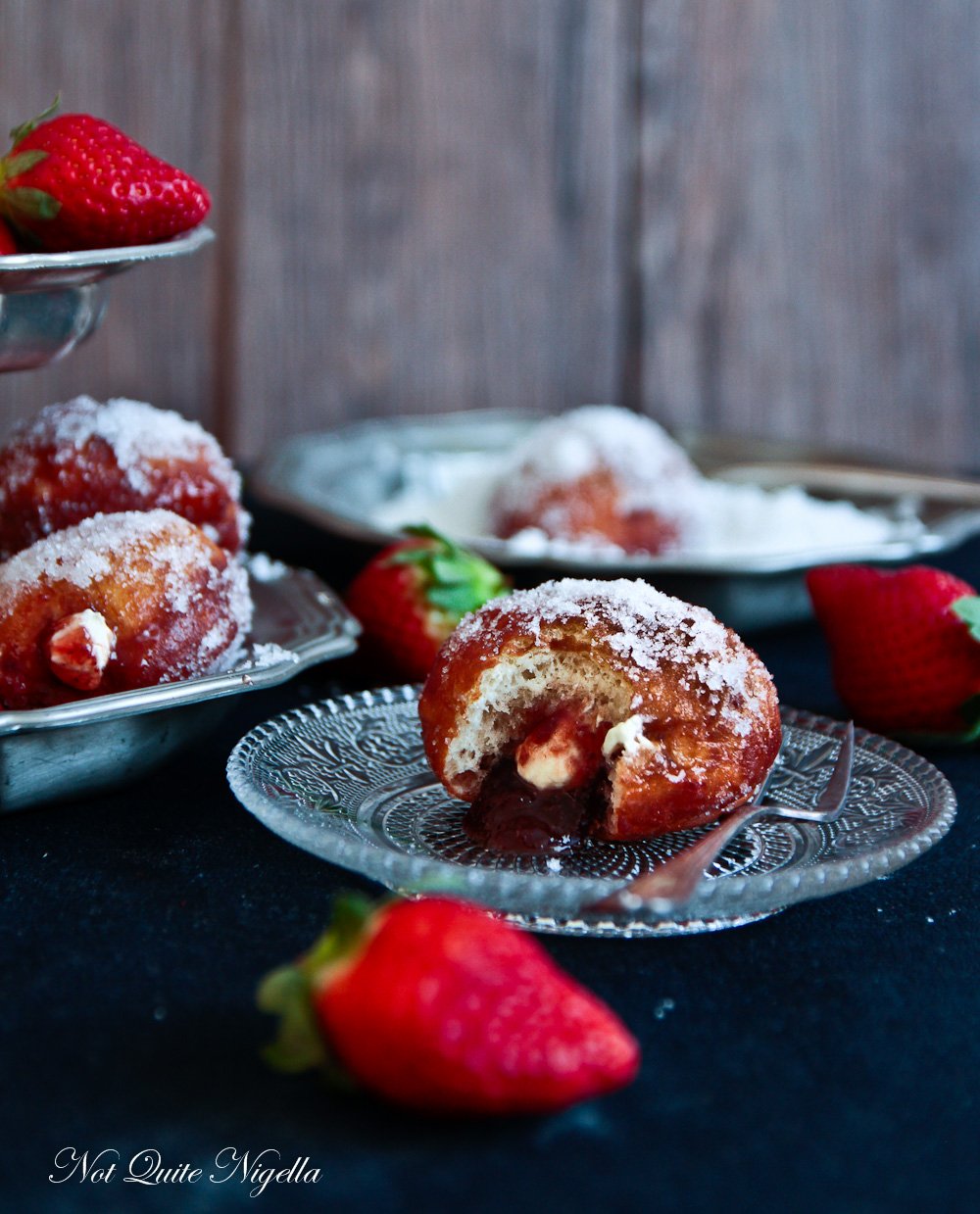 Preparation time: 20 minutes plus resting for 1.5-2 hours or overnight plus another 10 and 30 minutes 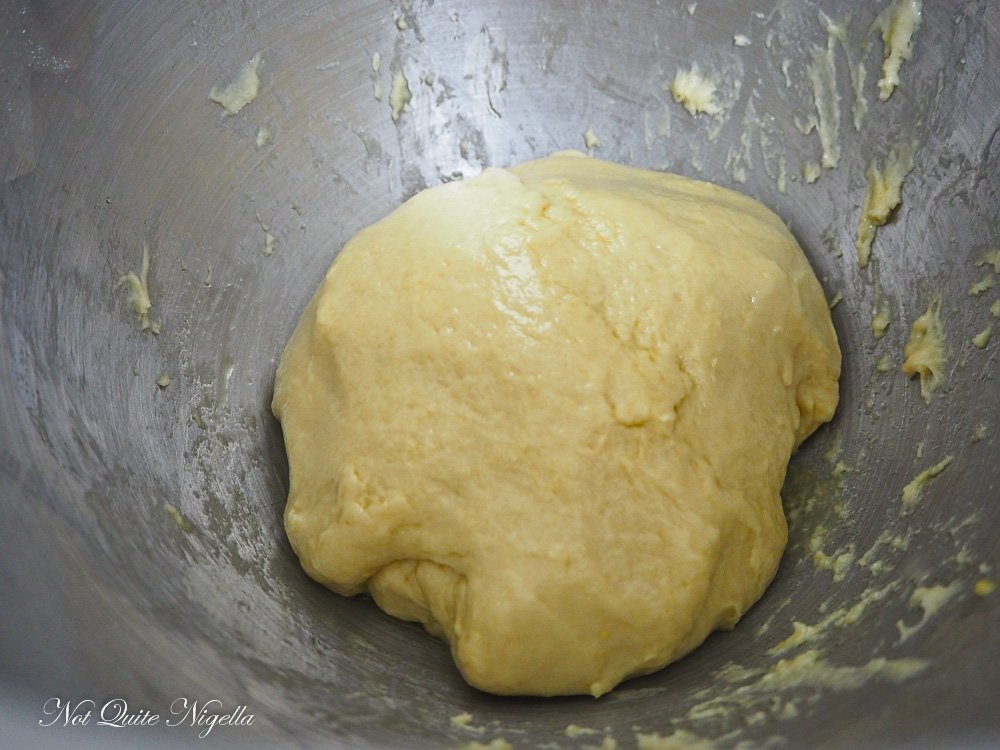 Step 1 - In a bowl, mix the lukewarm water, 1 tablespoon of the sugar and sprinkle over the yeast. Cover and allow to froth for about 10 minutes. Add the flour to the bowl of a mixer fitted with a dough hook. Add the remainder of the 1/3 cup of sugar, egg and the yeast mix. Start kneading and gradually add the 1/2 cup extra water to the mix until it forms a dough. It will be sticky. 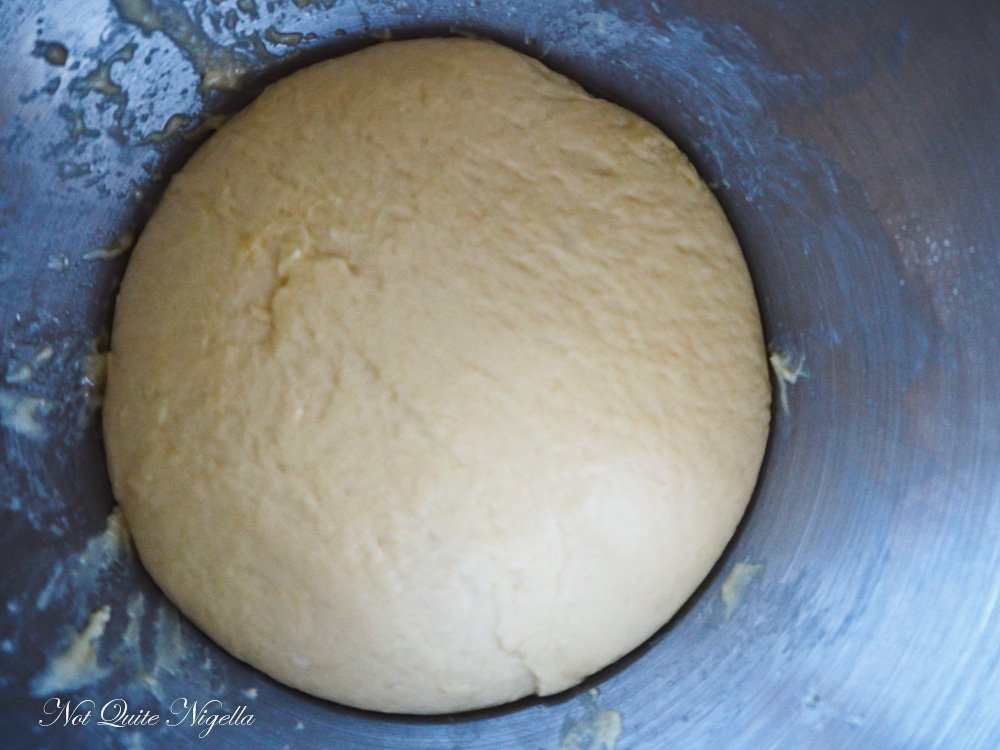 Step 2 - Grease a large bowl (I just used the mixer bowl) and shape the dough into a ball and cover with cling film. Place in the fridge overnight to rise or if you don't have the time place in a warm draught free area and allow to rise for 1.5 hours until doubled in size. 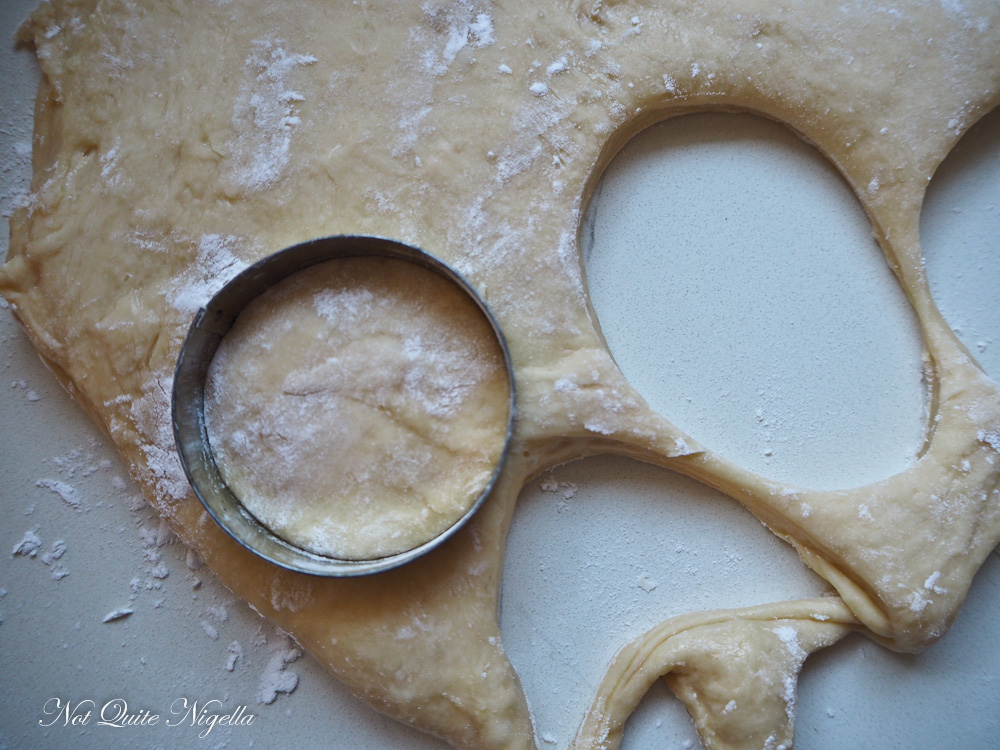 Step 3 - Punch down the dough and knead in the 1 teaspoon of salt. Flour a clean surface and roll out the dough. Cover and rest for 10 minutes. Dip a 5-6cm/2 inch cutter into the flour and cut out rounds. You can reroll them technically but they aren't quite as light as the first batch but they'll still taste good (just be sure to rest the dough for 30 minutes). 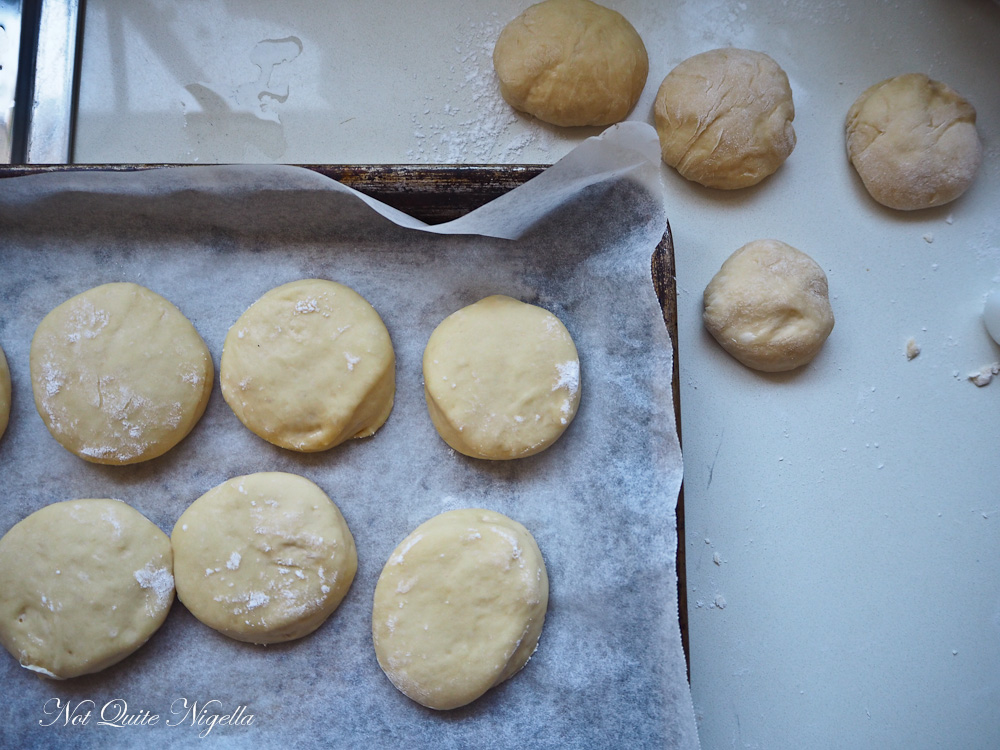 Step 4 - Place the cut out rounds in a warm area covered and allow to rise again for 30 minutes. 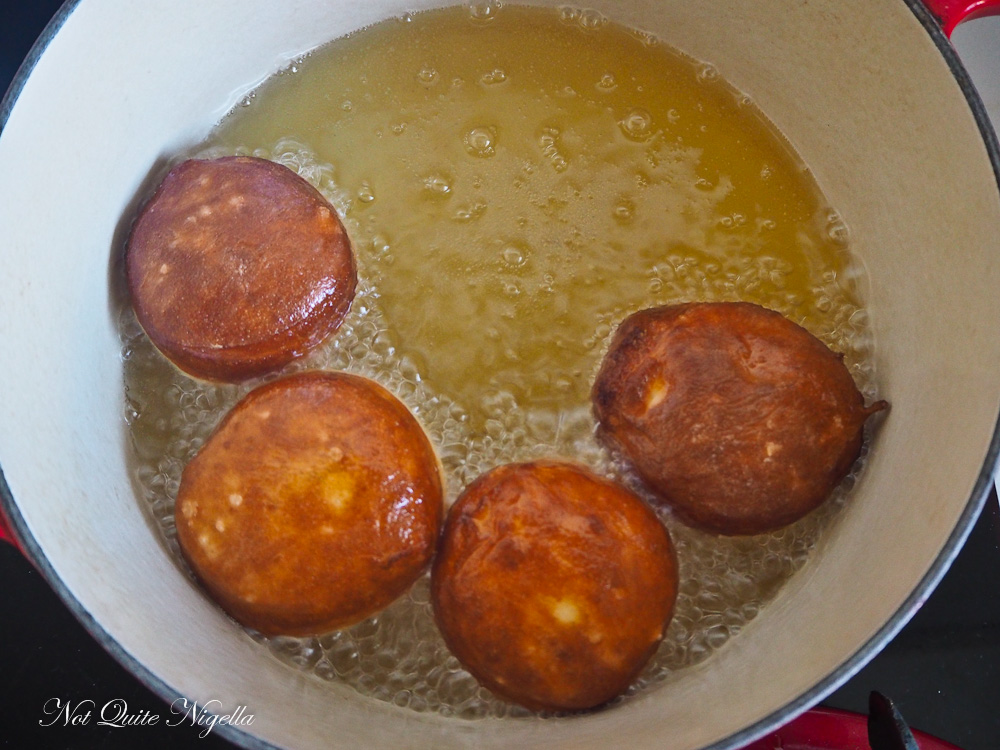 Step 5 - Add some oil into a deep fryer or large pot. Place the sugar and salt and mix in a large plate with a rim and spread it out. When the oil reaches 175C/347F the oil is hot enough. Fry the donuts being careful not to overcrowd them in the pan for about 2 minutes on each side. You want to make sure that the inside is cooked through. As soon as they come out, roll them in the sugar and place on a tray. 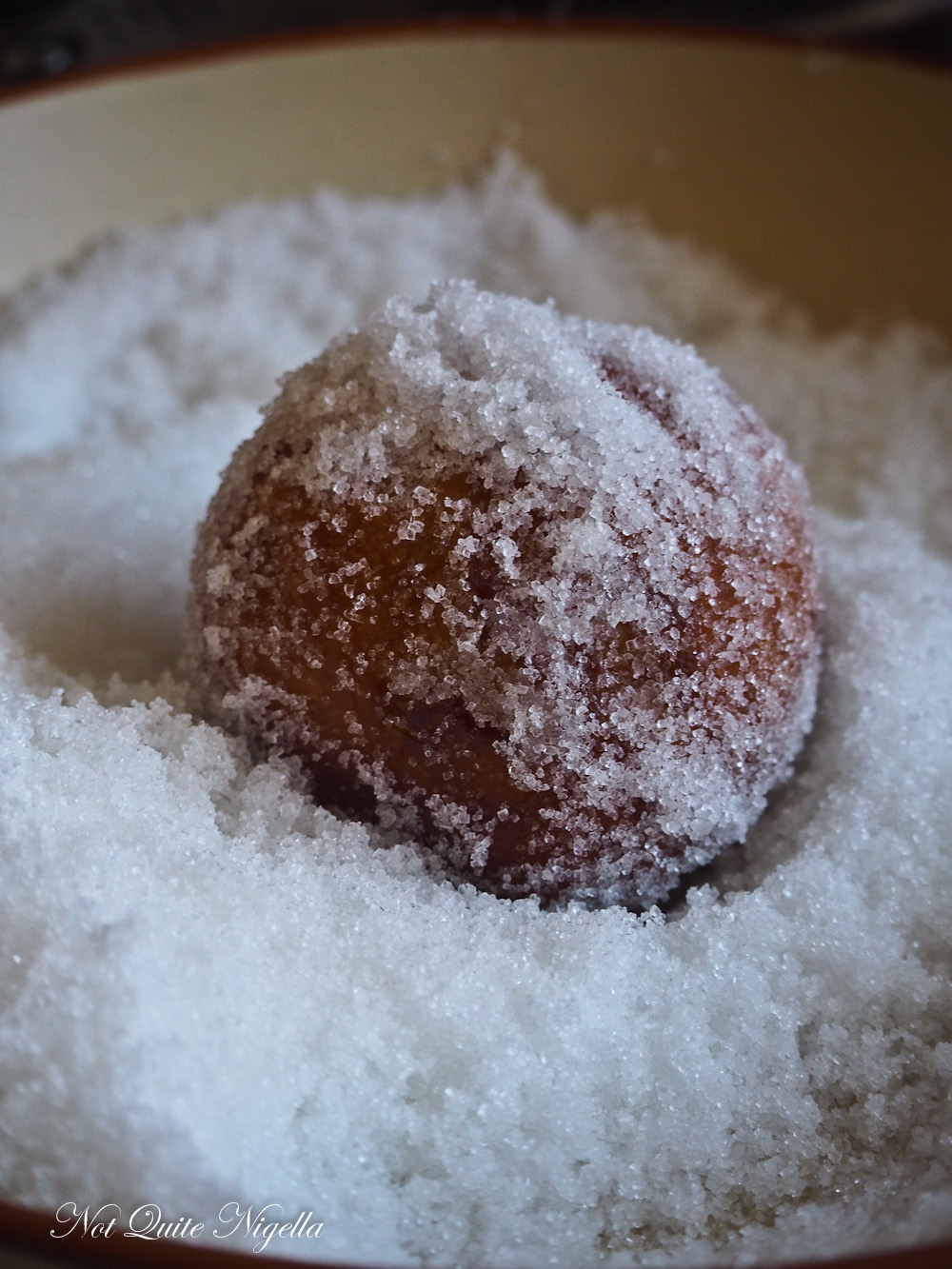 Step 6 - I waited for these to cool as I had to go out but I think that these would be epic if filled when hot. Using a sharp knife, cut a hole into each donut. Fit a piping bag with a tip and fill with jam and fill another piping bag with the sour cream. Pipe the jam and the sour cream inside the donut. Enjoy and savour!