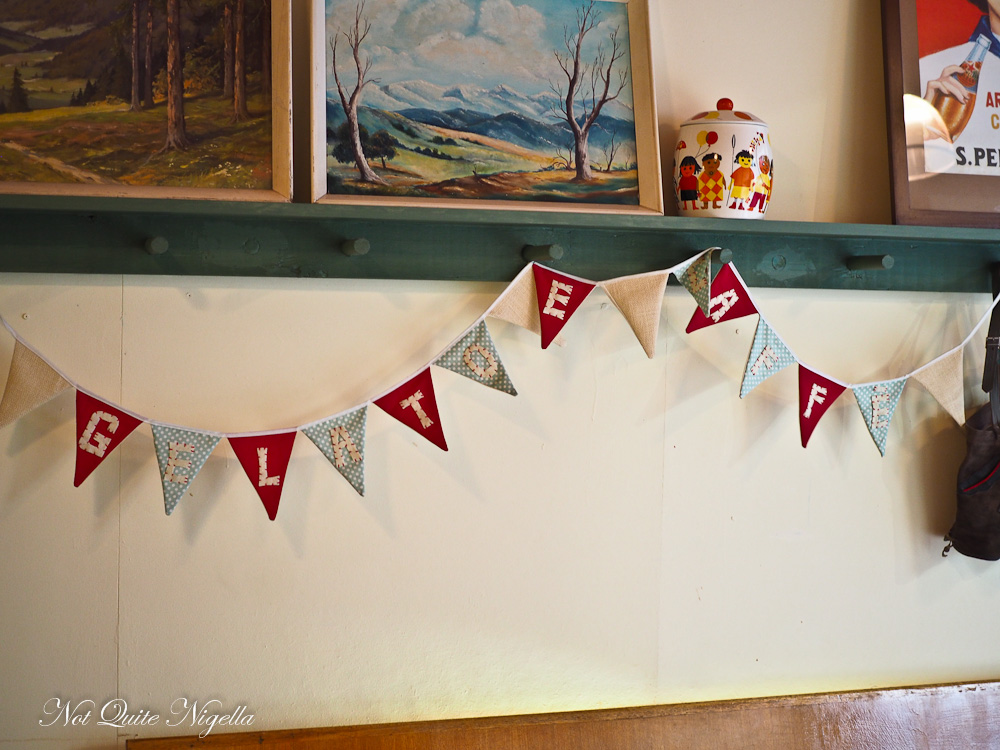 Picture this: two hungry girls i.e. me and my friend JY aka the Black Widow eating our way around Sydney's newest ice cream and gelato places on one sunny summer's weekend. We had hot weather on our side and the insatiable need for gelato. Would this be a recipe for success? Would we melt in the summer heat faster than ice cream? 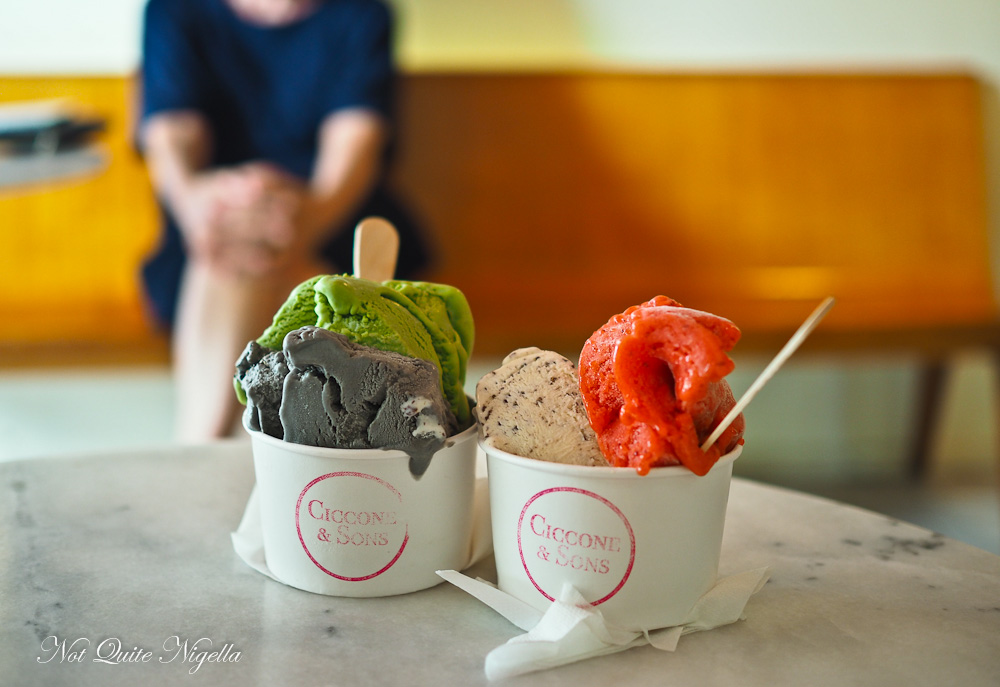 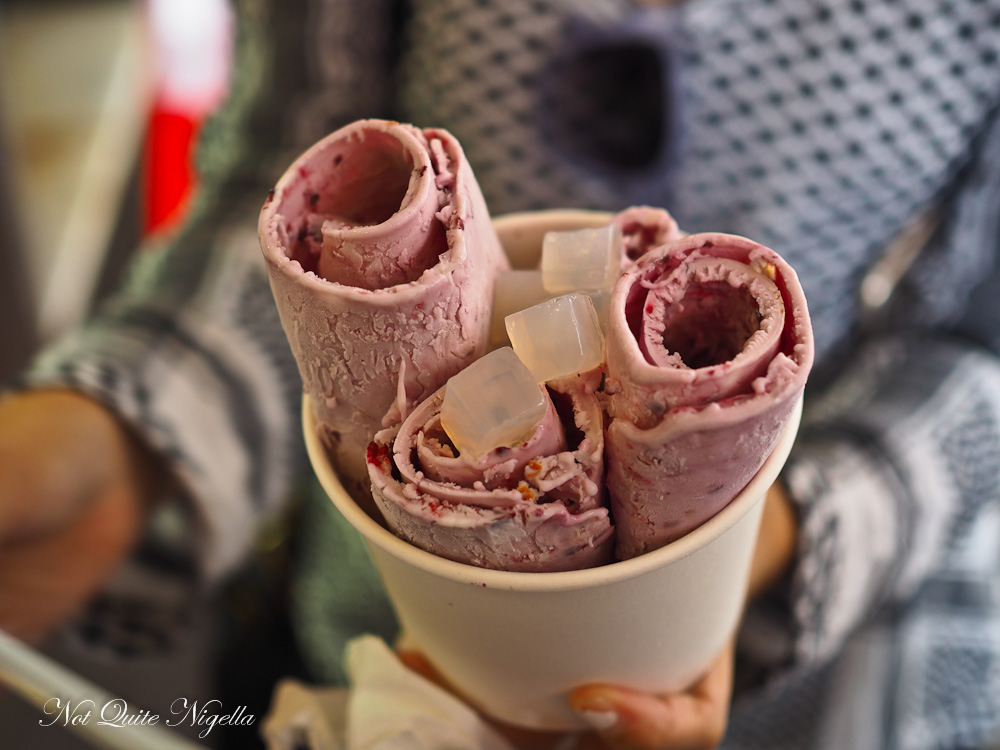 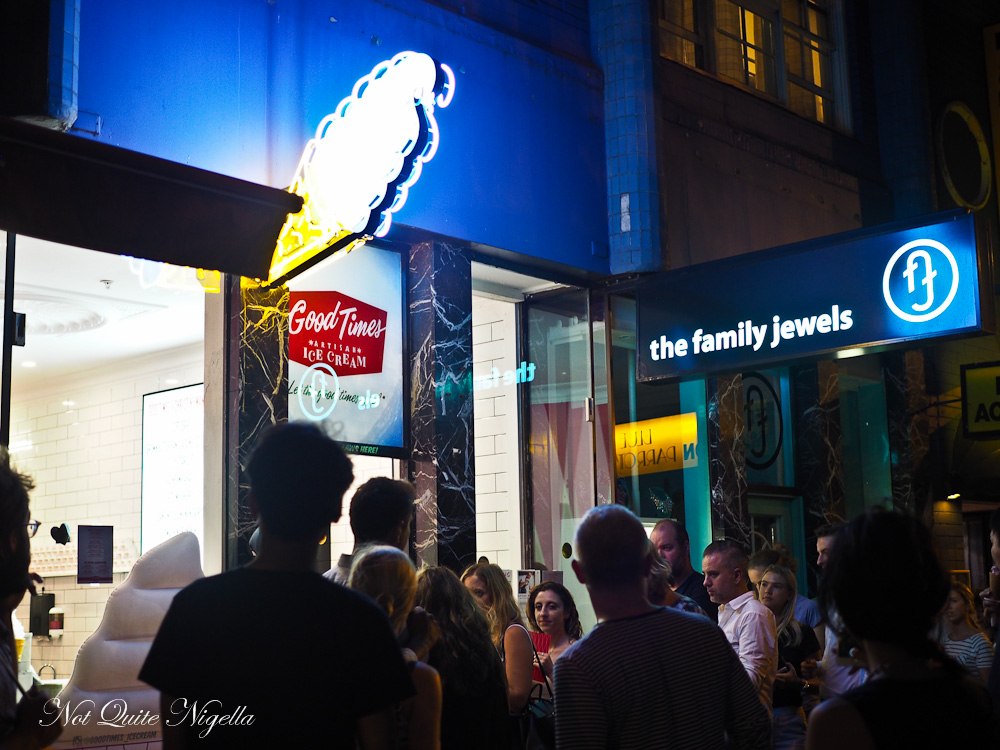 So what happens when a chef and a dessert chef team up for the launch of the chef's ice cream business? Long queues are a given as ex Nomad chef Nathan Sasi, his wife Sali and dessert diva Christine Manfield find themselves creating ice cream concoctions with names like Ziggy Stardust, Bite My Cherry and Sweetie Darling. There is also a range of four ice cream sandwiches on offer as well. 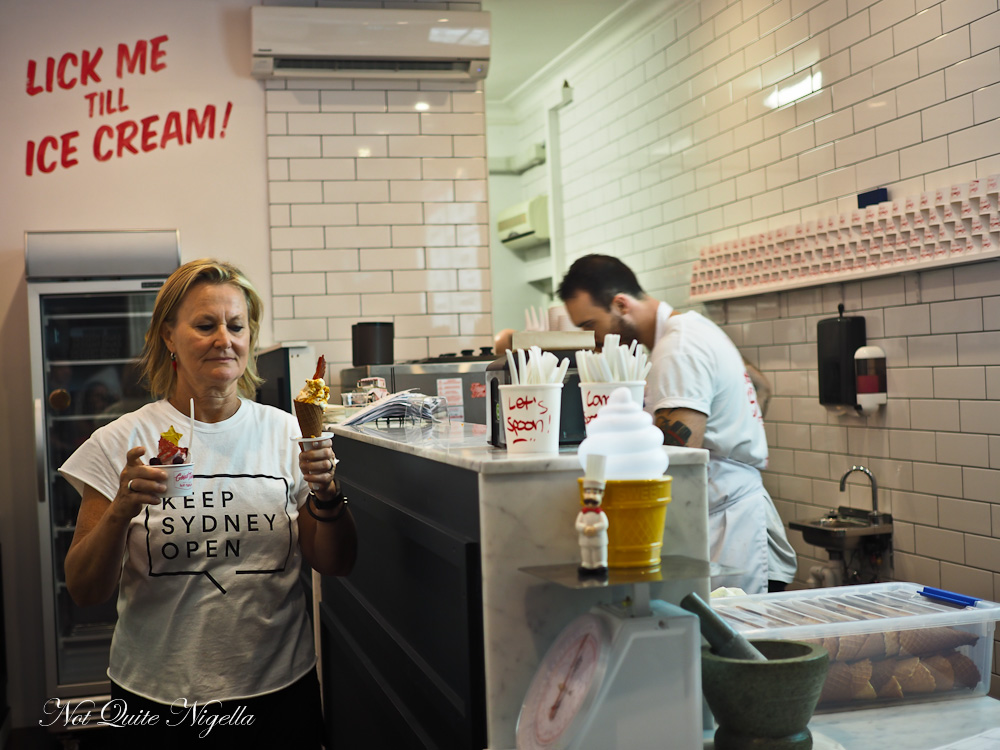 Outside is a man giving out menus. The crowd outside is a mix of the queue and those who have ordered and are waiting for their ice creams. We step across the threshold, a sign saying "No lickout laws here," and look down. There are said to be almost 12,000 bronze 2 cent coins embedded in the entranceway. JY and I visited on their second night although the queue seems worse than it is and we get our ice creams in around 5 minutes. 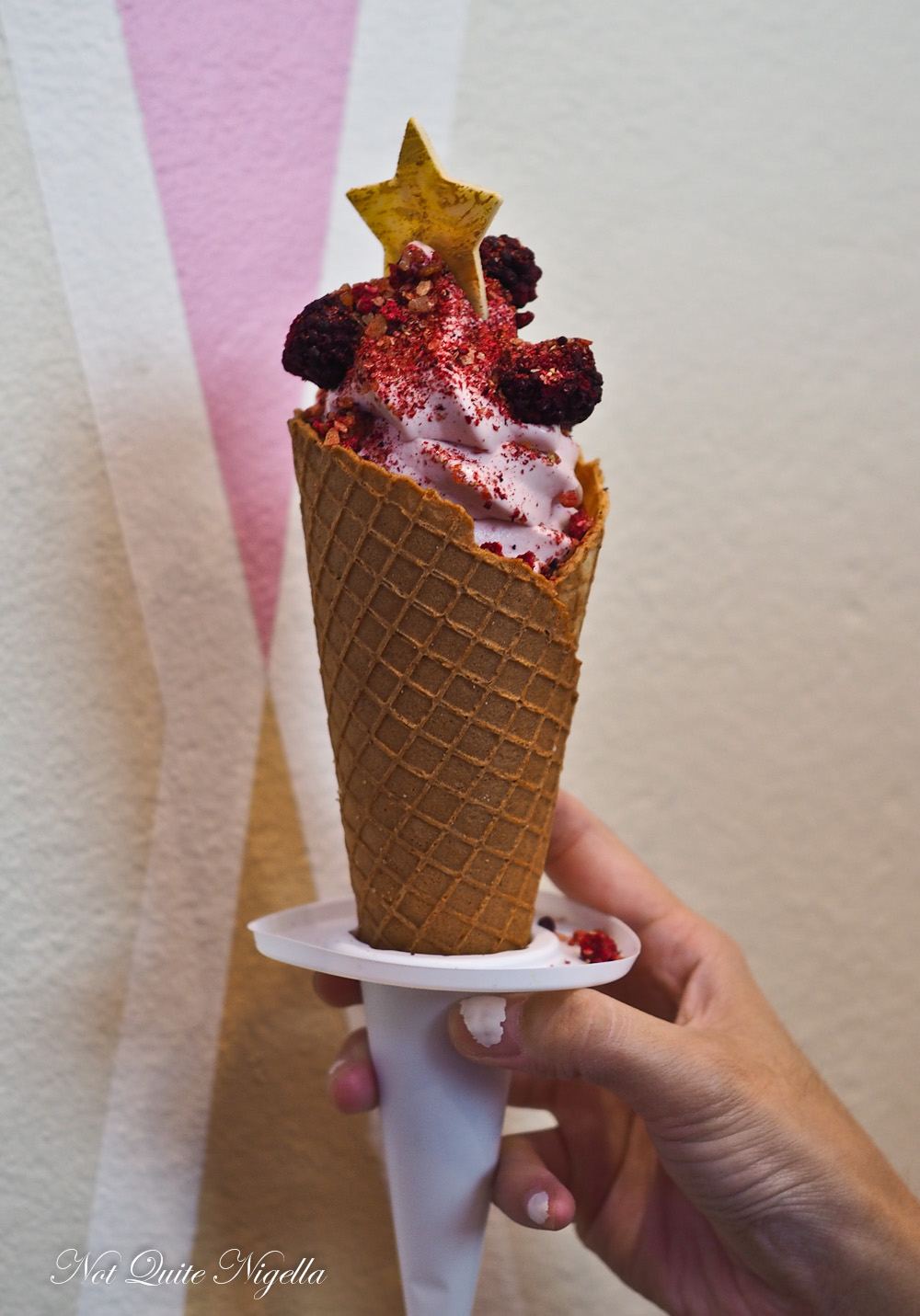 JY's choice, the Ziggy Stardust is made up with strawberry ice cream, blackberry crispies, strawberry powder and gold dust stars (it seems the pop rocks are missing). It's got just the right amount of creamy and tangy and almost goes in froyo territory. All of the components are made from scratch even down to the super crispy and fresh cone which makes this good value considering the work involved, especially when you compare the cost of a single scoop of ice cream at an international chain is $6.50. 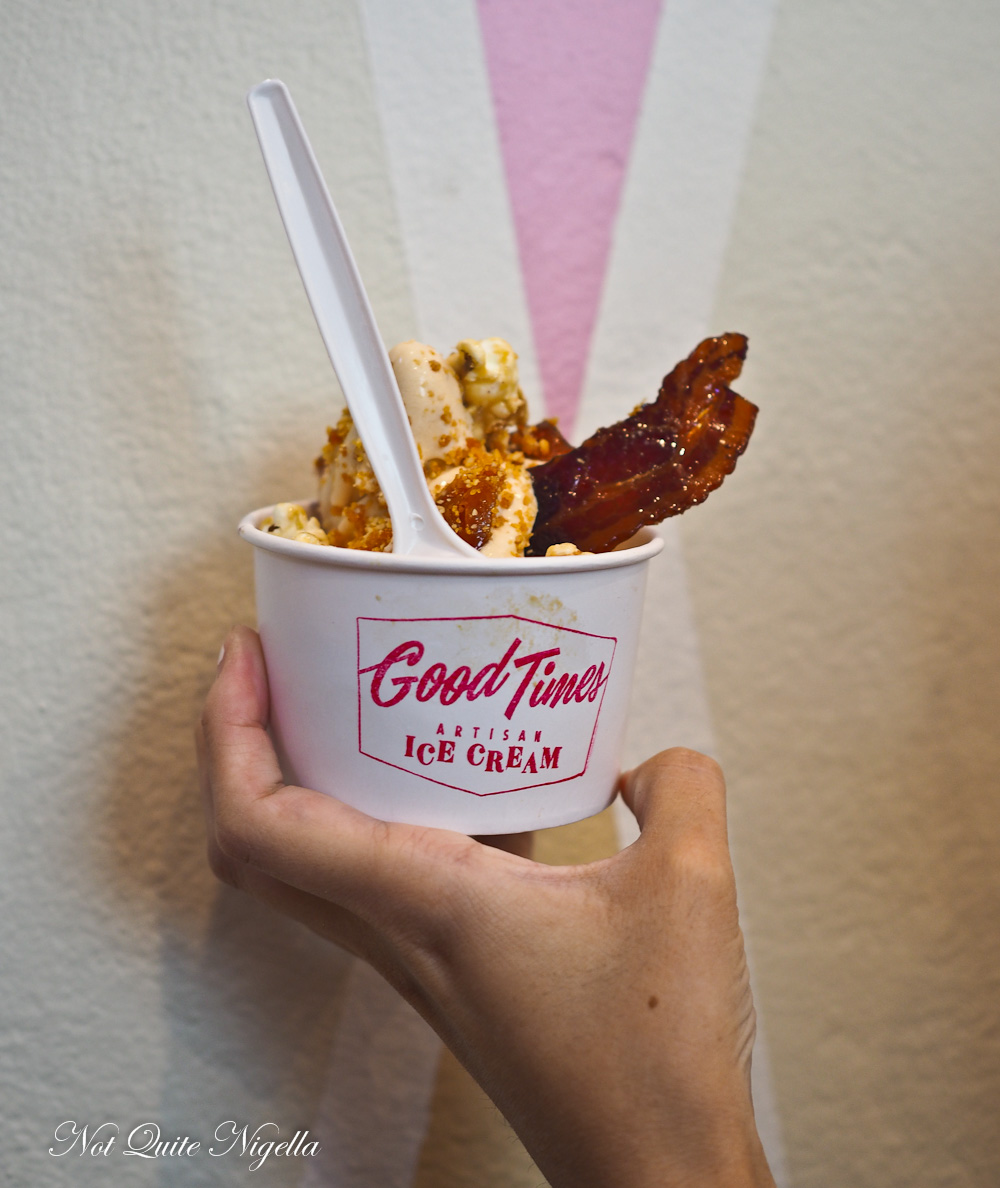 The Smashing Pumpkin is my choice and is salted caramel ice cream, salted peanut praline, candied pumpkin chunks, candied bacon wafers and caramel popcorn. The ice cream is gorgeously smooth, the bacon is crisp and sweet and the popcorn crunchy. 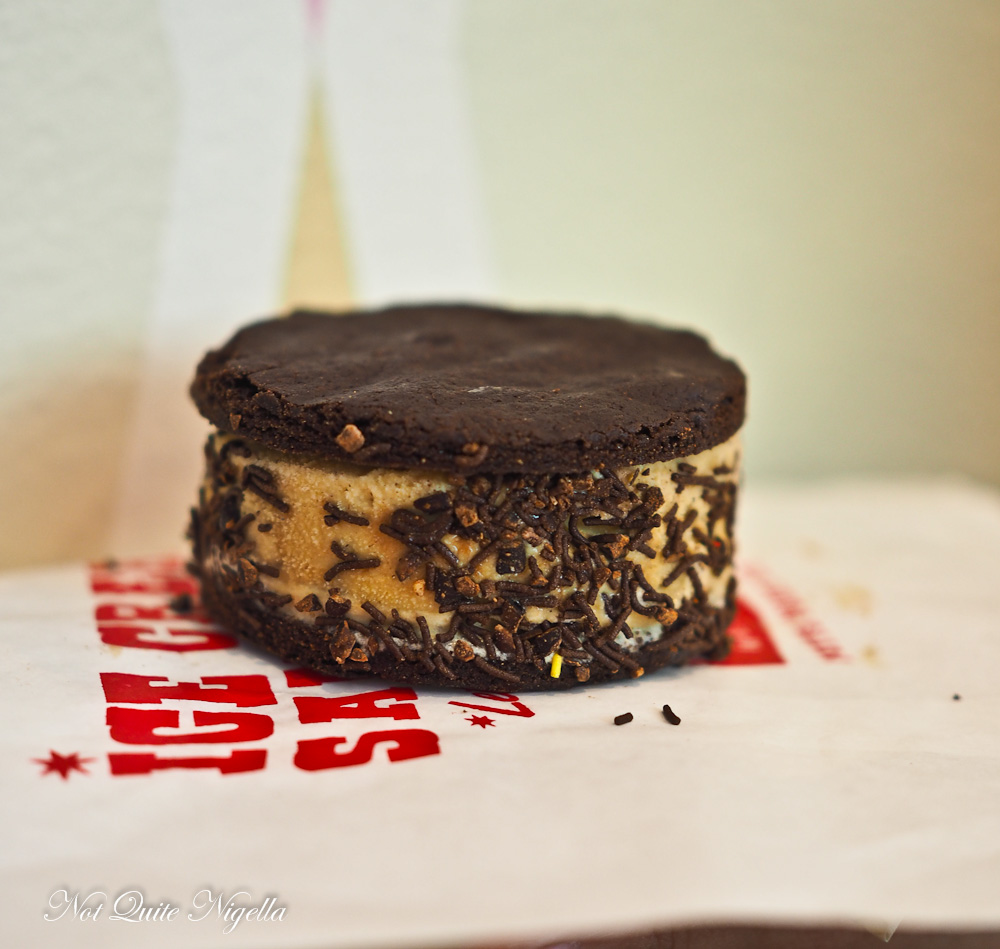 Alas the Lickalotapuss and the Dirty Blonde ice cream sandwiches (our first choices) have sold out so we order a Start Me Up. Perhaps better for during the day or for someone that doesn't mind a strong coffee injection at night, it's espresso ice cream, cacao nibs sandwiched in chocolate shortbread. And in the centre is a liquid espresso caramel filled chocolate balls that is explodes when you bite into the centre. 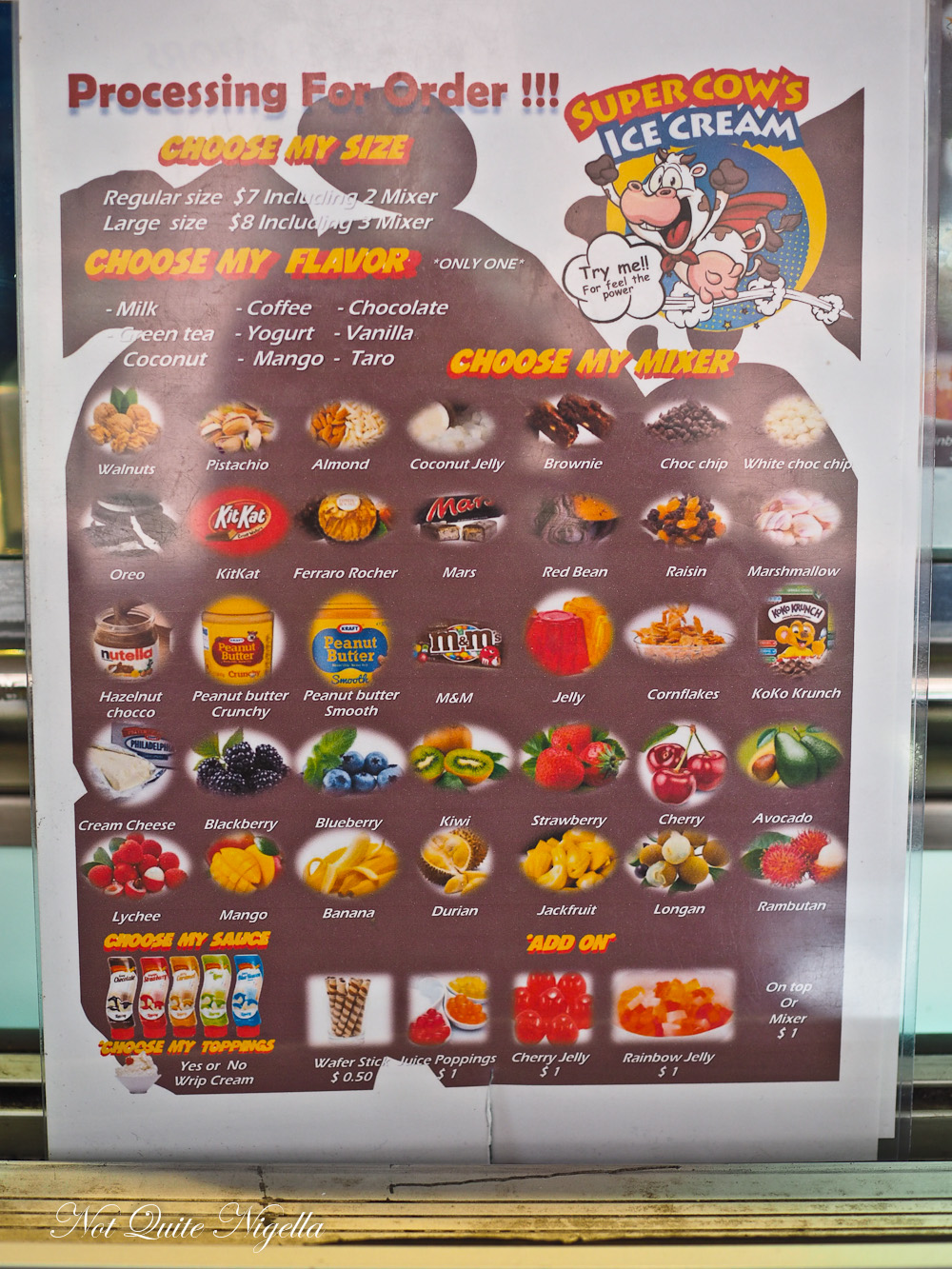 "You can't let your customers make bad choices as that will ultimately just make you look bad!" says JY. It's true you can only really blame yourself if you hate the flavour that you get at Three Mama's. When it first launched two months ago, the queues snaked for metres down the street. The fuss has died down somewhat and there is another branch called Curl Berry in Bondi Beach and soon one to come in Central Park (all under different names but with the same owner).

How they make scroll ice cream

You may have seen scroll ice cream in action in Thailand. You choose a base mix and then pick the ingredients you want mixed in. They empty it onto a cold -20°C or -4°F degree pan and smash it together before spreading it out and cutting it into four or five sections and creating scrolls out of it. 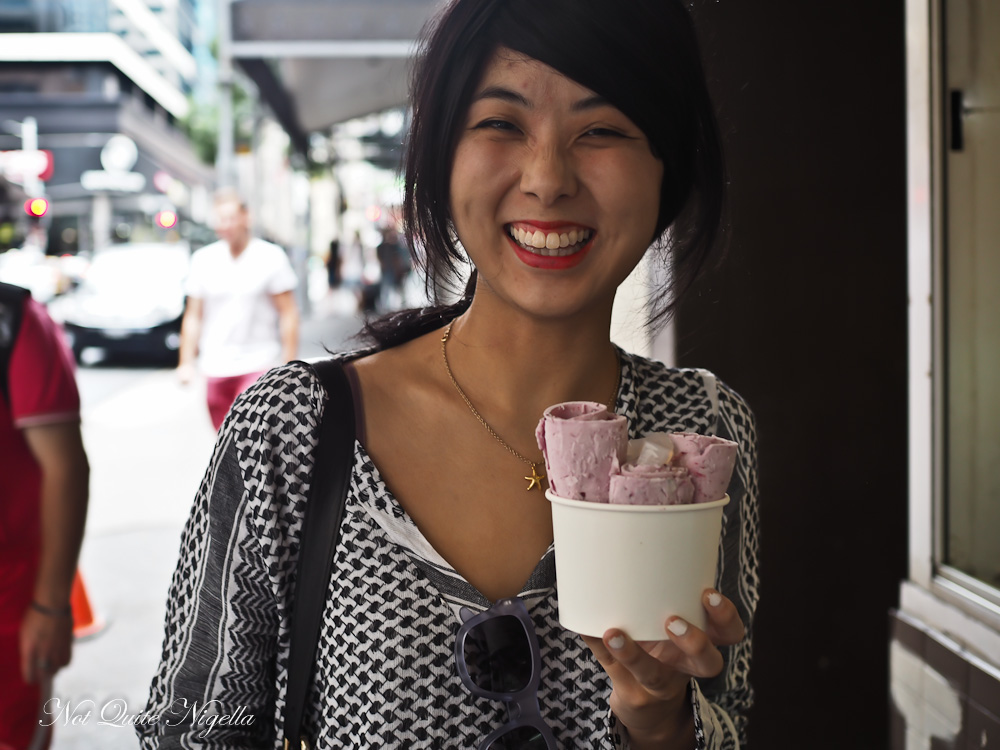 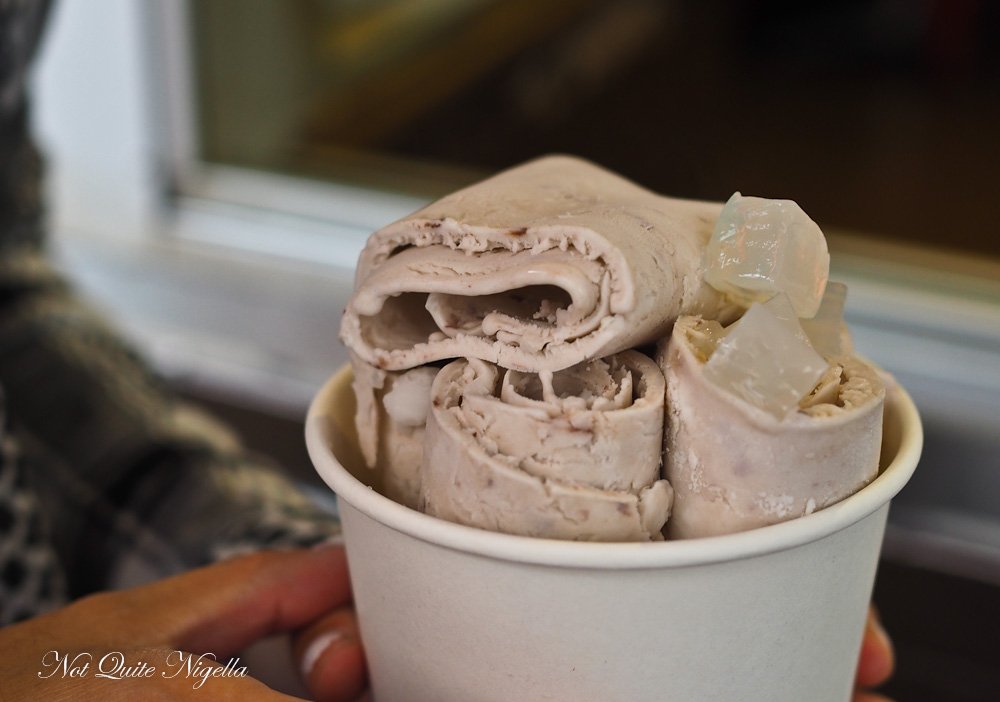 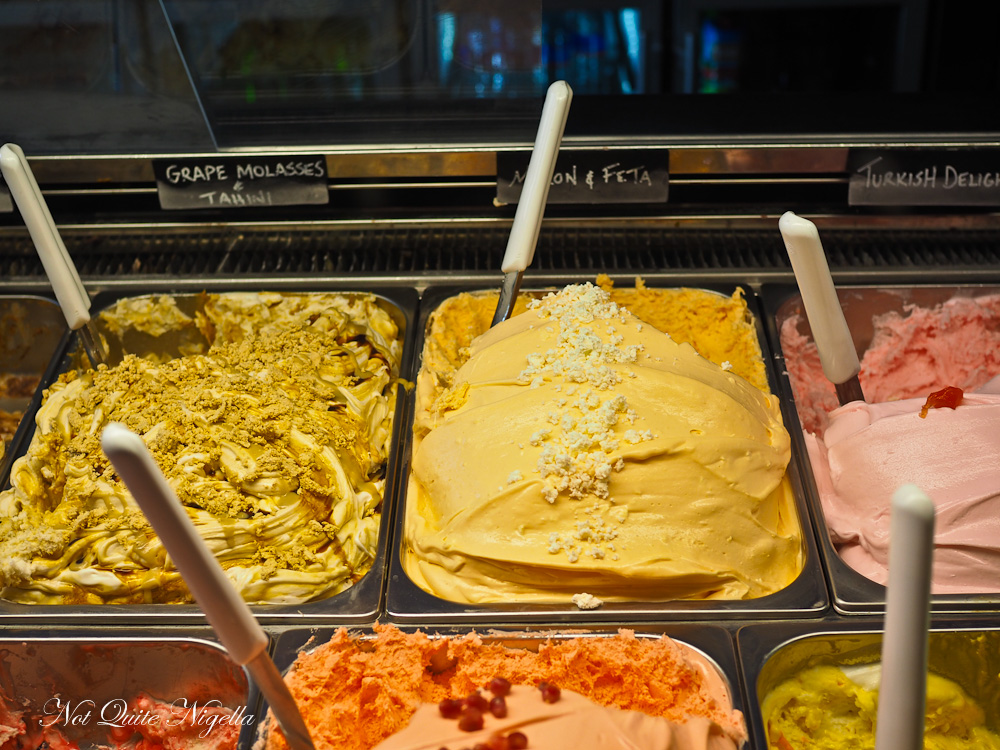 It used to be you had to drive to Auburn to get a taste of stretchy Turkish dondurma ice cream. But now Hakiki (meaning true or real in Turkish) on Enmore Road has opened up and there's a delightful range of flavours on offer from melon & feta, caramelised fig and walnut and pomegranate. The texture is what sets dondurma apart from other ice cream. It's stretchy and chewy from the addition of mastic for chewiness and salep to thicken. 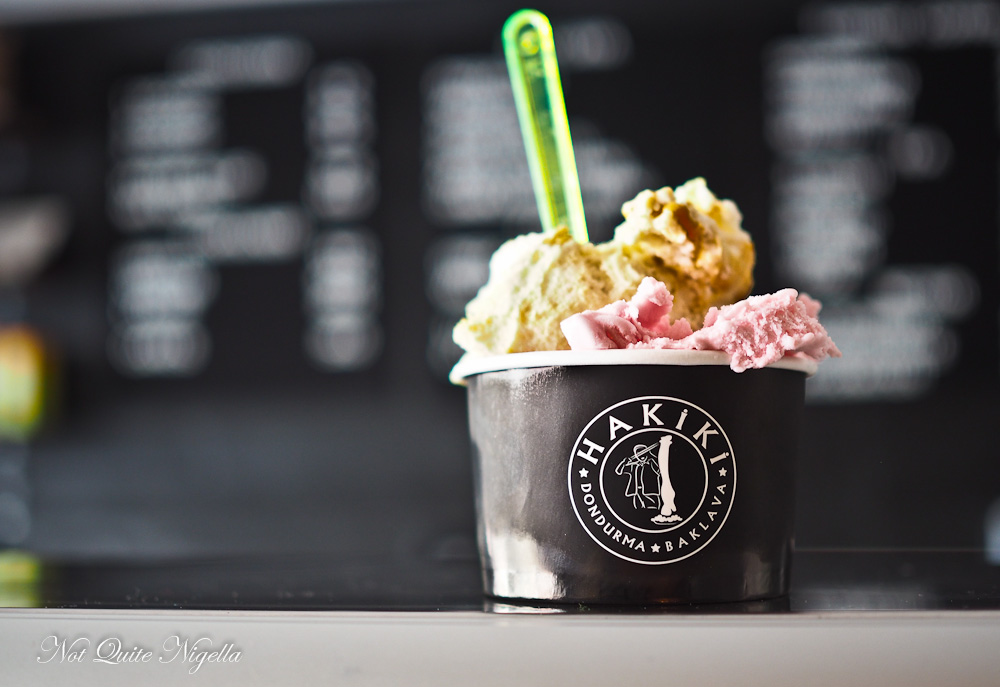 And in no other flavour is this texture more prominent than in their Turkish Delight that tastes as though you are chewing on the delectable, rose flavoured sweet treat. Another favourite is the grape molasses and tahini-that's my sort of flavour. You can pair these with a Turkish tea and a fabulous baklava in flavours like rhubarb and sour cherry. JY who is a regular here says, "I usually get the sour cherry 99% of the time which I rate a 9." 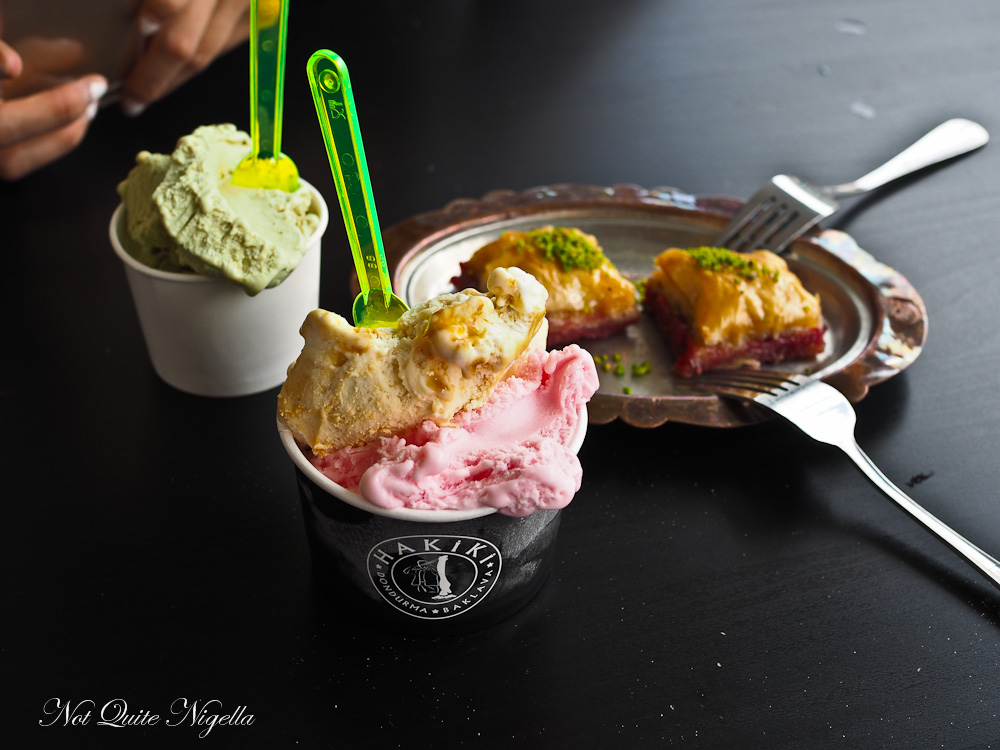 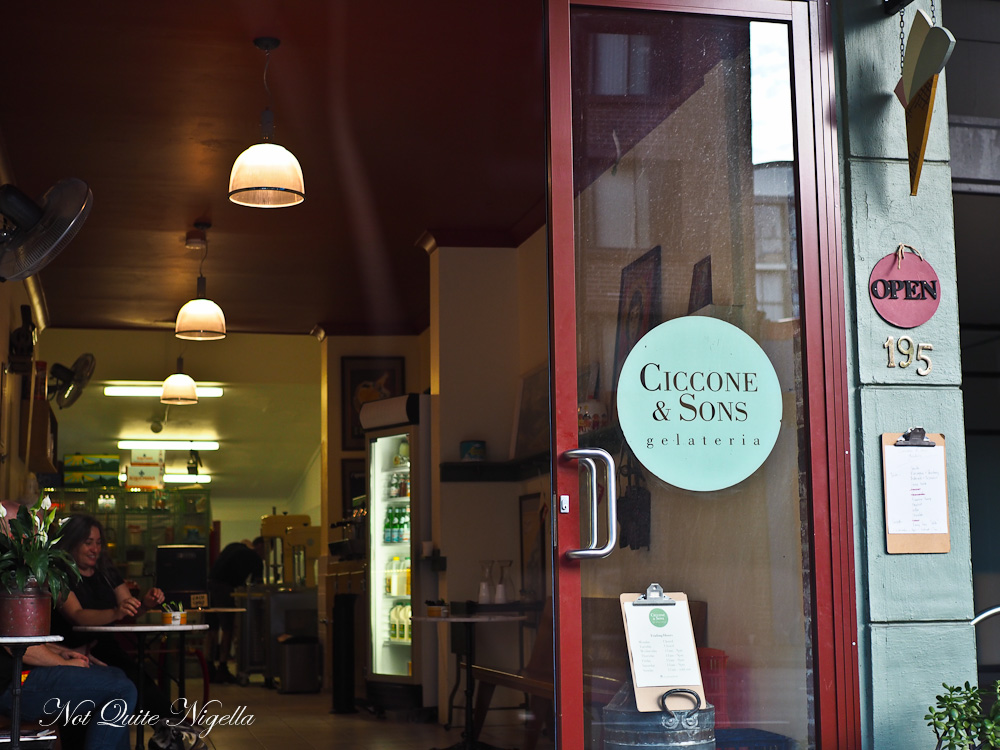 Is it weird that the first thing I thought of when I heard of Ciccone and Sons is Madonna, the most famous (and only) Ciccone I know? It's no coincidence and when the two owners Mark Megahey and Sean O’Brien with their very Irish names set up their own gelateria they decided to name it after the music diva's Italian surname. Mark also explain that the word Ciccione with an additional "i" also means "Fat" in Italian. 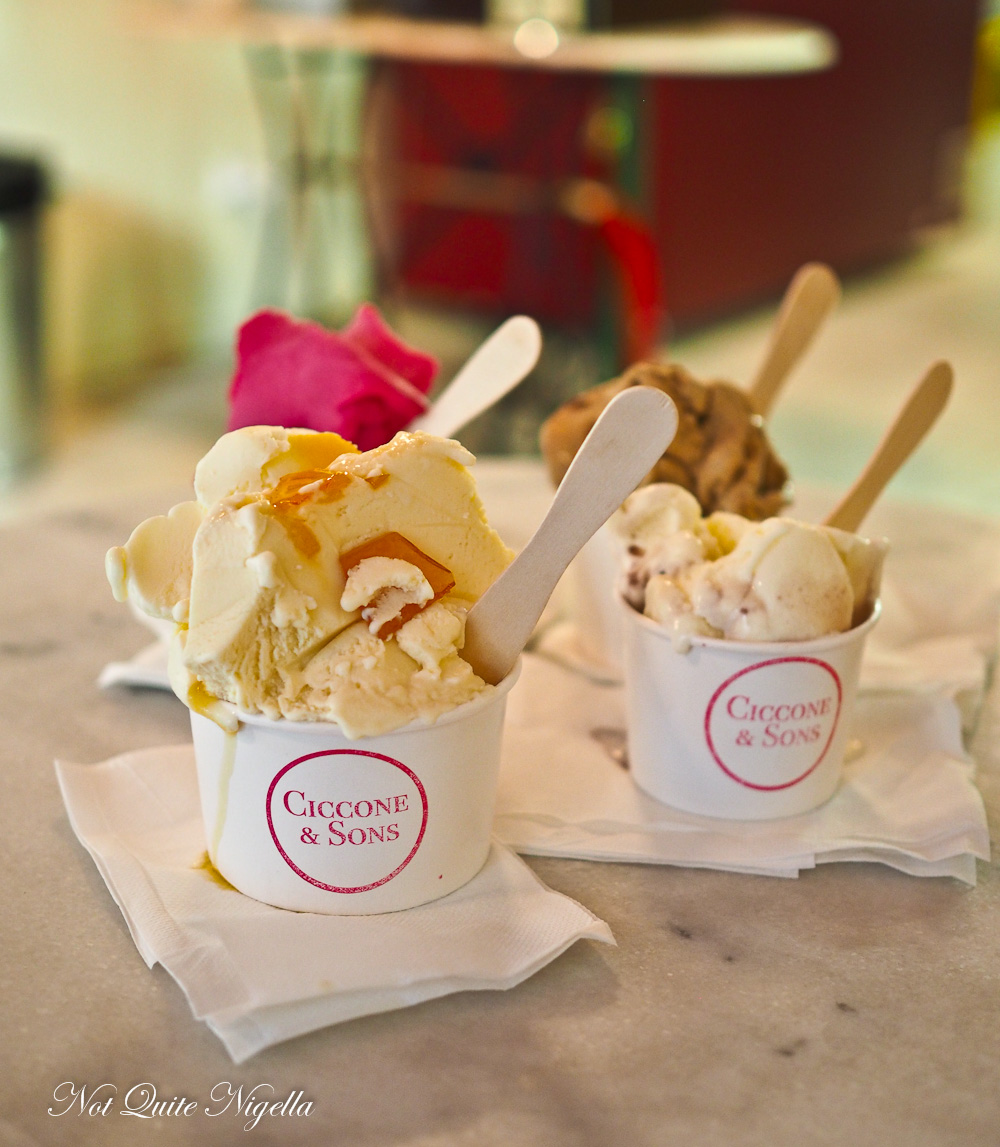 And what a place it is. Mark is a veteran gelato maker formerly at Bar Italia. This small but popular place on Regent Street Redfern churns out gorgeous jersey milk gelato. Ask Mark about their flavours and he will explain that as the mangoes are at the end of the season, they are super fresh and sweet but the strawberries are excellent this week. It's all made the day before to sell the next day. My favourites are the buttermilk and passionfruit which is said to be their most popular flavour (that sometimes sells out before midday). The creme brulee with generous shards of toffee is divine while their latest hits are the black sesame (with bits of Chinese black sesame toffee) and matcha. 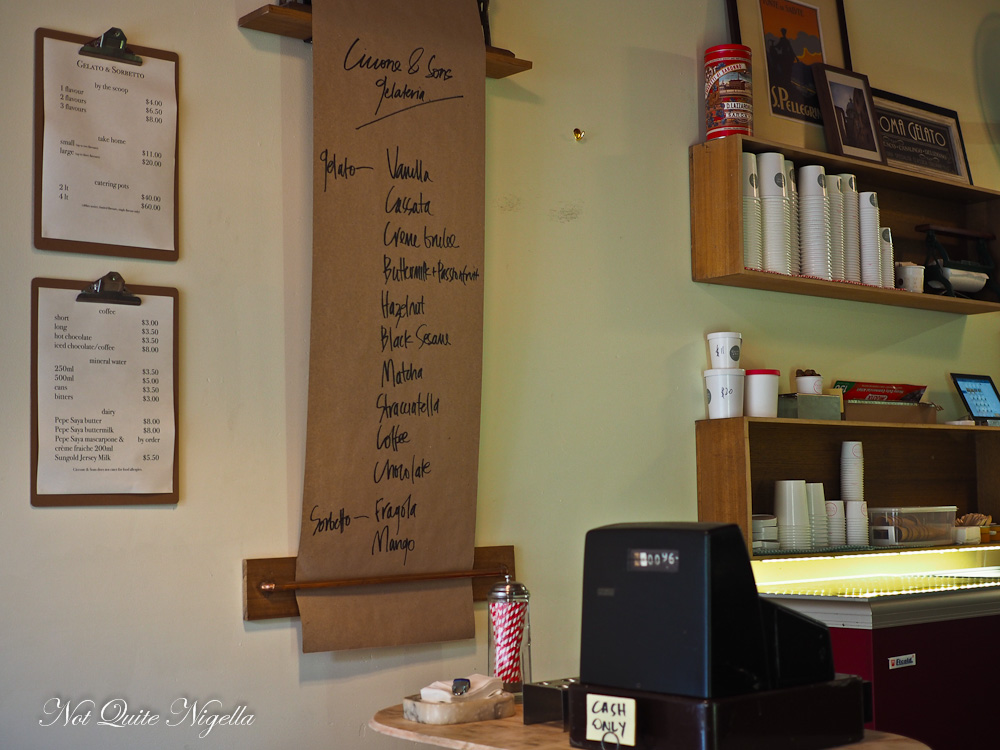 JY choice is the fragola or strawberry which she says is, "perfectly sweet and a little bit tangy. I also loved the stracciatella - the milk base was creamy and the ratio of choc pieces was great, and the size of the chocolate pieces were a good size. Some places have sizes that are so small that you can't even taste them."

Ice cream and sorbet of the day $15

Thai ice cream? Is that a thing? It sure is, in a country that even in Winter is tropical. At Sunrise Asian in Elizabeth Bay they do a range of ice creams and sorbets in tropical fruit. Their signature ice cream is a purple blue concoction based on the colourful butterfly pea flower that colours it. To this they add salted caramel and it is what has to be a perfectly balanced combination of sweet, salty and yum. Also on the menu at the time of visit was soursop (perfectly sour sweet) and a hibiscus and torch ginger. They also dabble in some native Australian flavours like orange and lemon aspen. 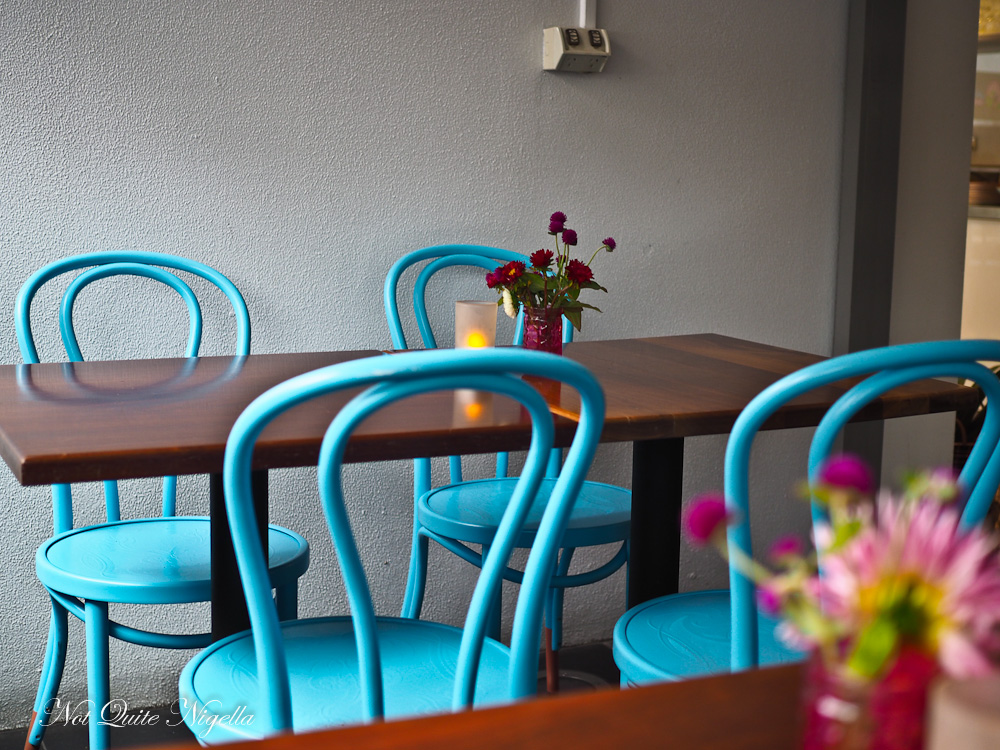 So tell me Dear Reader, which place appealed to you the most? What is the most ice cream you have eaten in one go? Do you prefer simple or complex ice cream flavours?

All of this food was independently paid for.