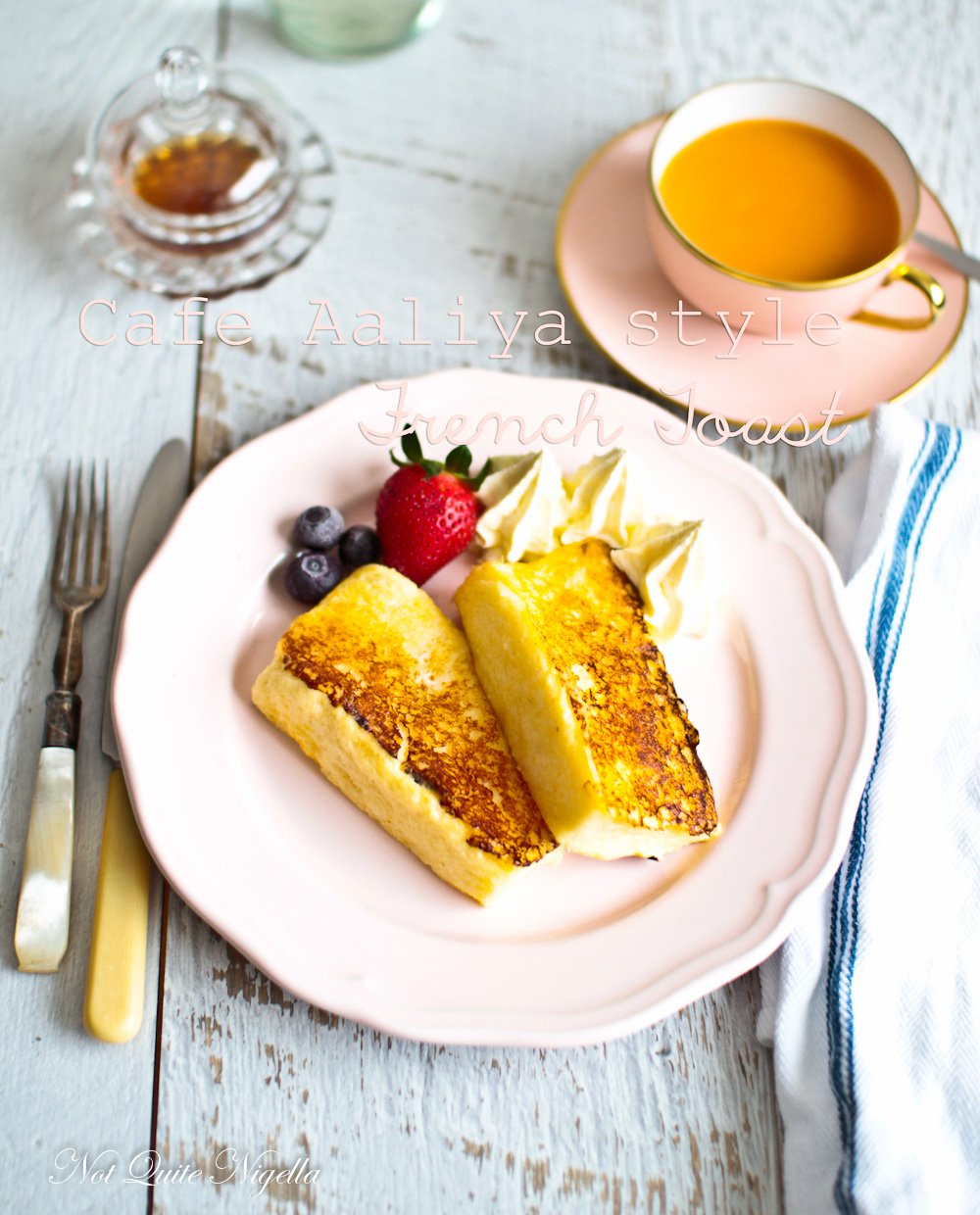 It's a big boast to say that something is the world's best. I mean anyone's world could really be the four corners of their house or the suburb that they live in but when I visited Tokyo recently, there was one thing that I was constantly being told: the French toast at Cafe Aaliya in Shinjuku was the best French toast in the world.

So curiosity piqued, we trotted off to Cafe Aaliya following a meal where we ate the most divine wagyu steak while standing up (it's Tokyo, just go with it). Neither of us were hungry and Mr NQN actually groaned when he saw the queue. For someone who doesn't care too much about food he is remarkably agreeable but his feet were hurting (see stand up steak place) and he didn't think that anything was worth queueing for.

Fortunately the queue moved quickly and in less than 10 minutes we were sitting down at a table. Every single table at Cafe Aaliya had a serve of French toast. Funnily enough there are only three things on the food menu: French toast, salad and a panini. 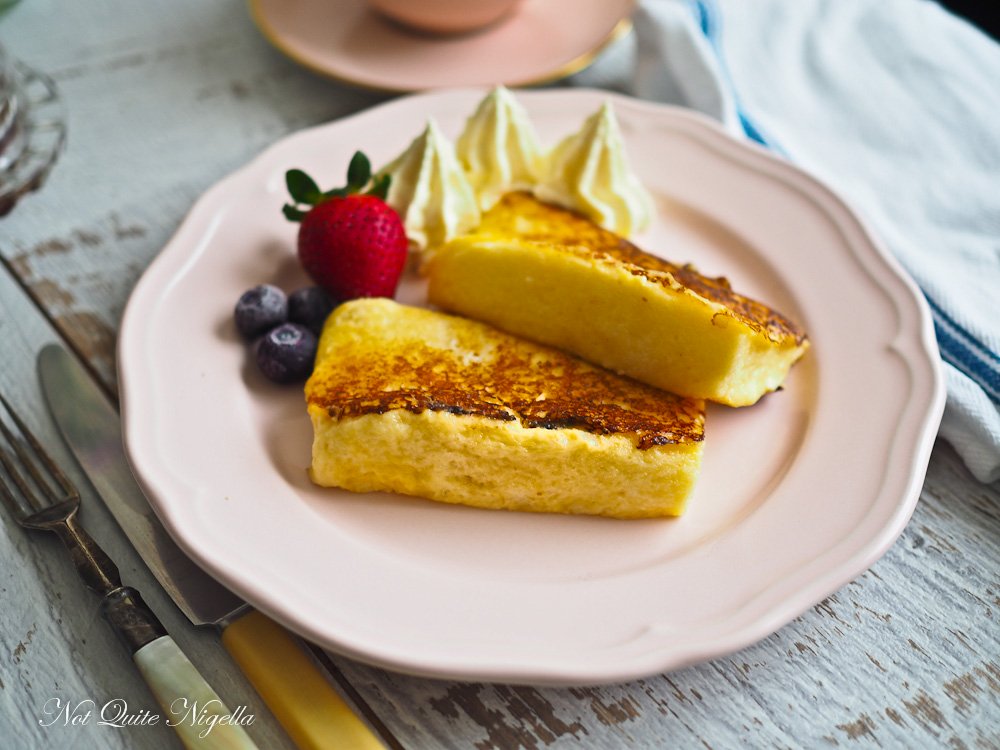 I could tell that Mr NQN wasn't overly delighted but ordered a tea. This was good and a smile returned to his face a few minutes after. Then they sat down the French toast. I had seen picture of it on the internet but nothing quite prepared me for the softest, downiest most delicious French toast ever. Mr NQN tried some and he was smitten, any previous angst effectively erased by the motion of lifting this delightful pillowy soft morsels to his mouth. It is so soft that they serve it with a butter knife and fork. If you read the reviews by customers on various review sites, so many people are similarly smitten. There is of course the occasional person that finds it too sweet or "wet" but it really melts in the mouth. As we left the queues snaked all the way up the stairs. 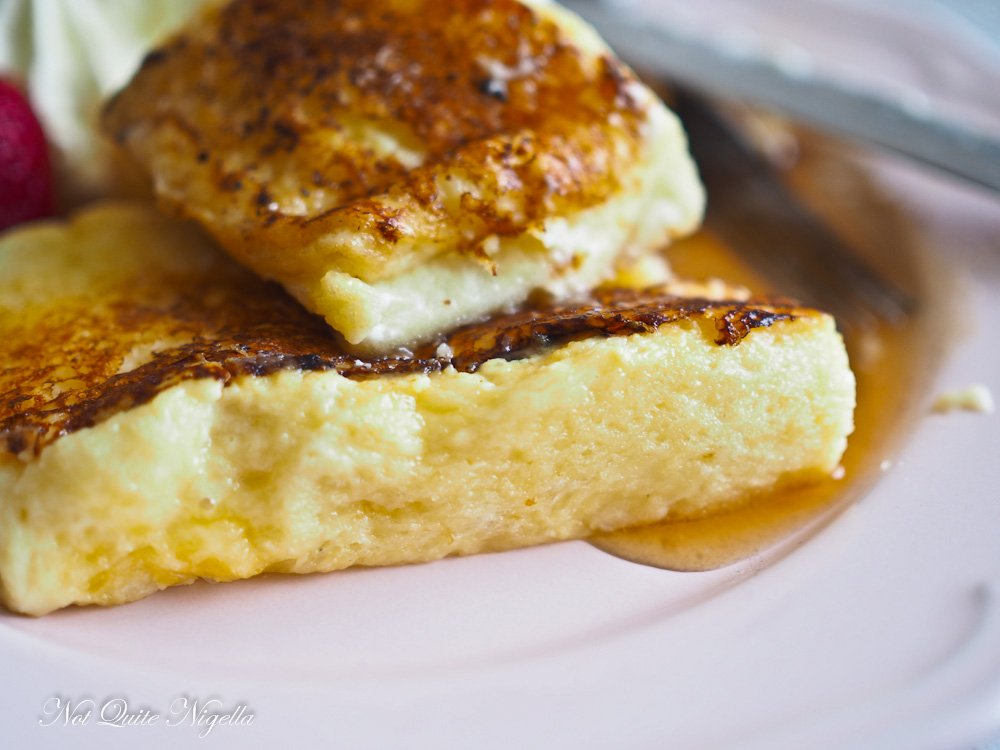 After that I decided that I would devote my whole life (Japanese style) to trying to come up with a copycat recipe for it because I can't fly to Tokyo every time I want French toast. On the very day we touched down in Sydney I started my quest. I went to an Asian bakery and bought some butter bread. And while the taste and texture was actually quite easy to replicate and we got that in the second attempt, it just didn't look as neat as it did in Tokyo. A third fourth and fifth attempt was made before it came to me one afternoon while daydreaming about the French toast.

You see butter bread is ridiculously soft and downy (hence why it makes such soft French toast) so no matter how sharp your knife is, the cute will become slightly jagged. But if you freeze it, voila! The best French toast in the world is yours at your fingertips!!

Which leaves me free for another food pursuit to devote my life to! :)

So tell me Dear Reader, are you trying to perfect a dish? Is there a food you could devote your whole life to?

And here's a quick video showing you how to make the Cafe Aaliya Copycat French Toast!

A Recipe by Lorraine Elliott 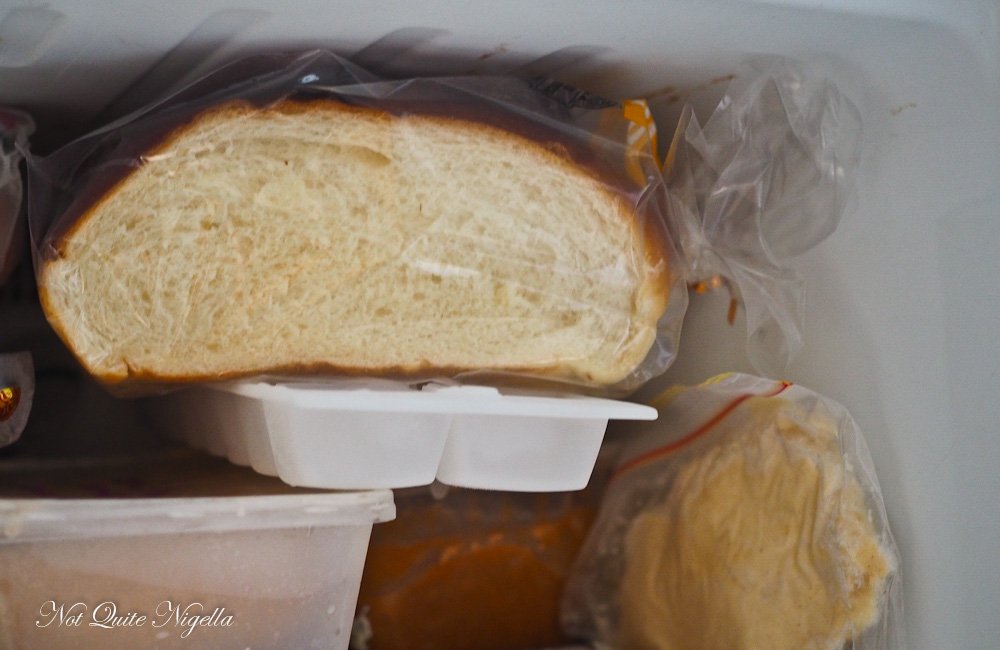 I'm pretty sure you could do without a picture of a loaf of bread in my freezer. And yep that is a ziplock bag of frosting :)

Step 1 - Place the loaf in the freezer for 2-3 hours until it is frozen solid. This step isn't strictly necessary for the taste but it does give you that Cafe Aaliya perfect look. 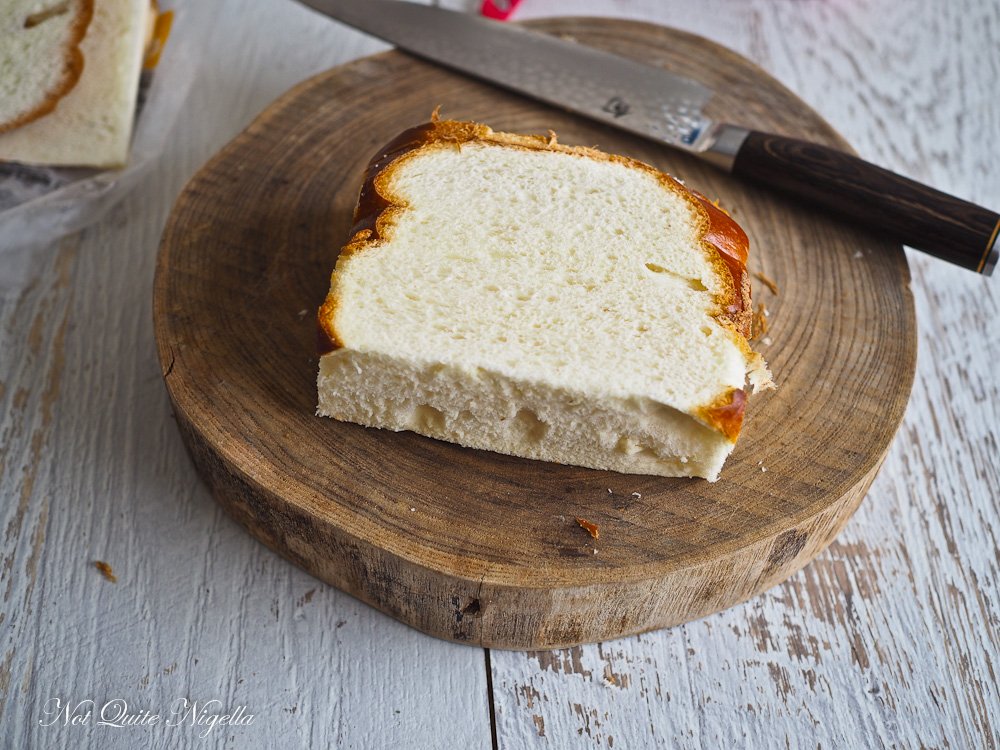 Step 2 - When frozen take a large sharp knife and trim off the crusts (save all the offcuts for delicious buttery breadcrumbs). Then trim them to become small rectangles. 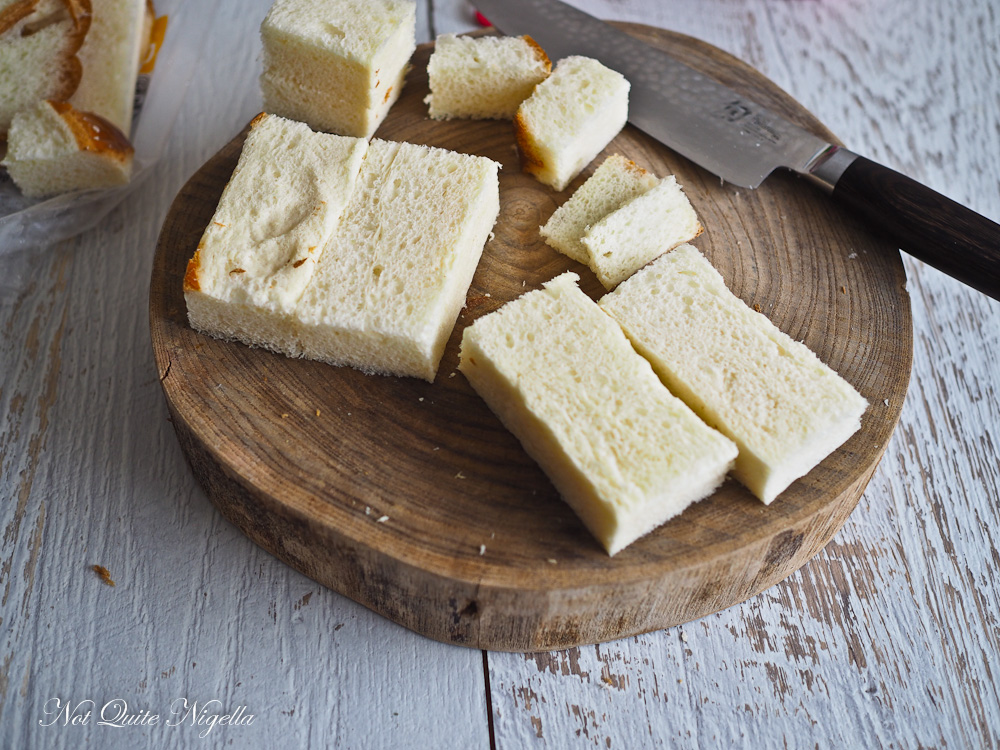 Step 3 - Whisk the egg yolks with the cream, milk and sugar. Dip the bread into the mixture and allow to absorb for 2 minutes. By this stage the bread will have defrosted-I froze mine overnight and it thawed really quickly. 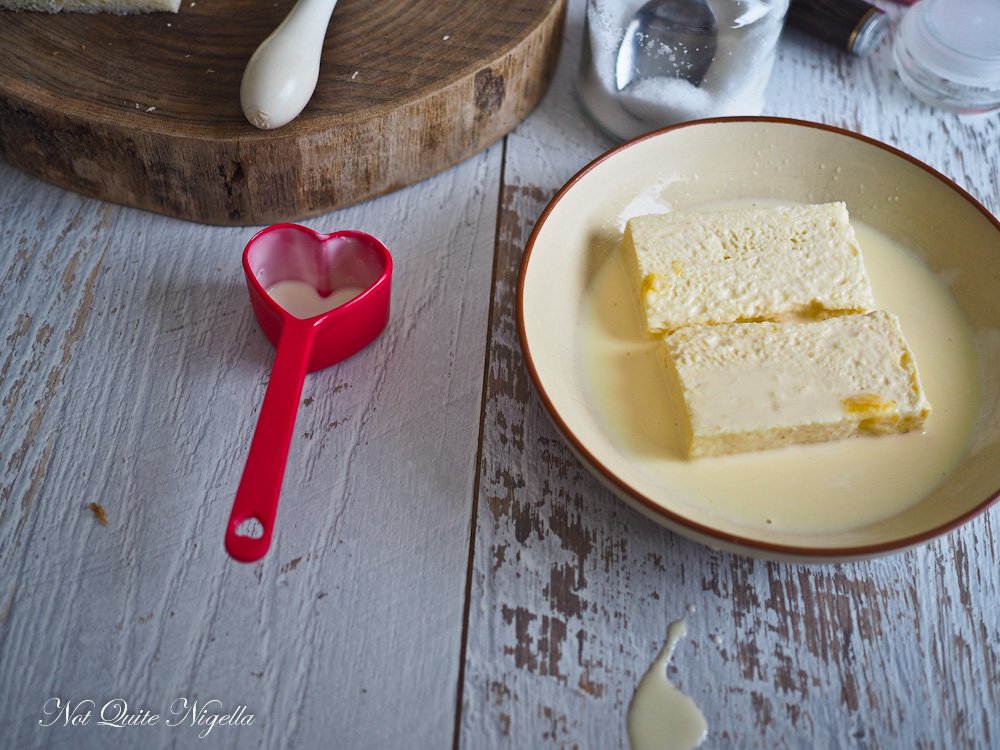 Step 4 - Meanwhile heat a frypan or skillet on very high heat (8 or 9 out of 10) and spray with non stick oil. Using a lifter, remove the bread from the eggy mixture. Do not use fingers as you will make indents in the bread because it is so soft. I mean you could, but again you wouldn't get that perfect Cafe Aaliya look (can you see how obsessed I was at this point? This was my 6th loaf!). 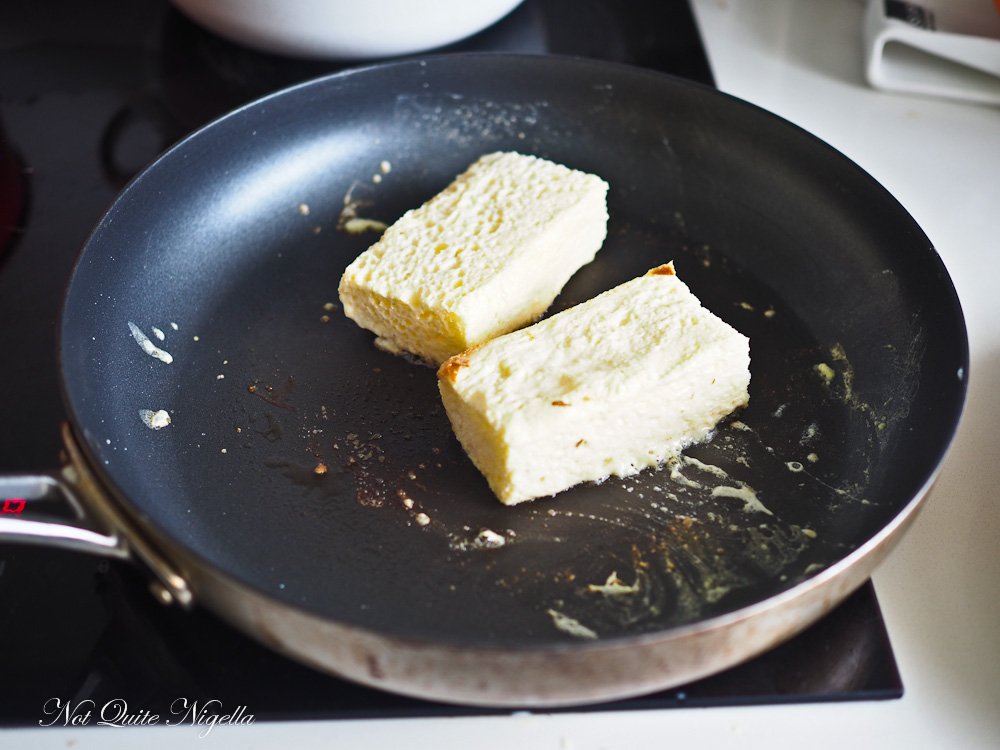 Step 5 - Fry until the cut sides are browned and gently turn over. The inside will still be soft. Serve with cream and jam or maple syrup. 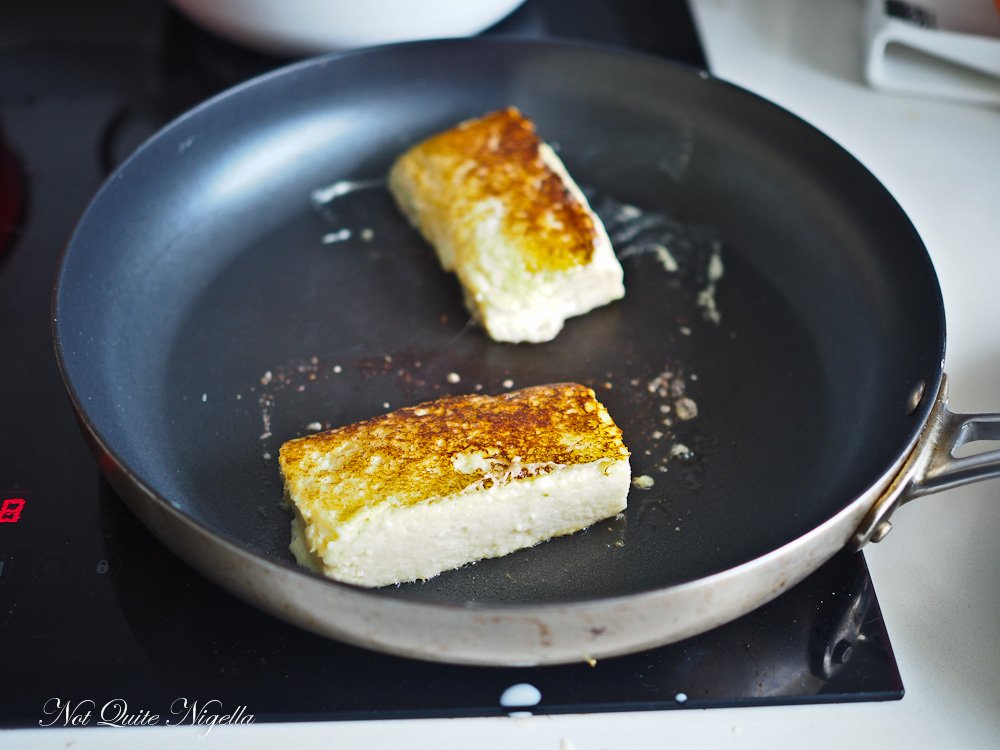