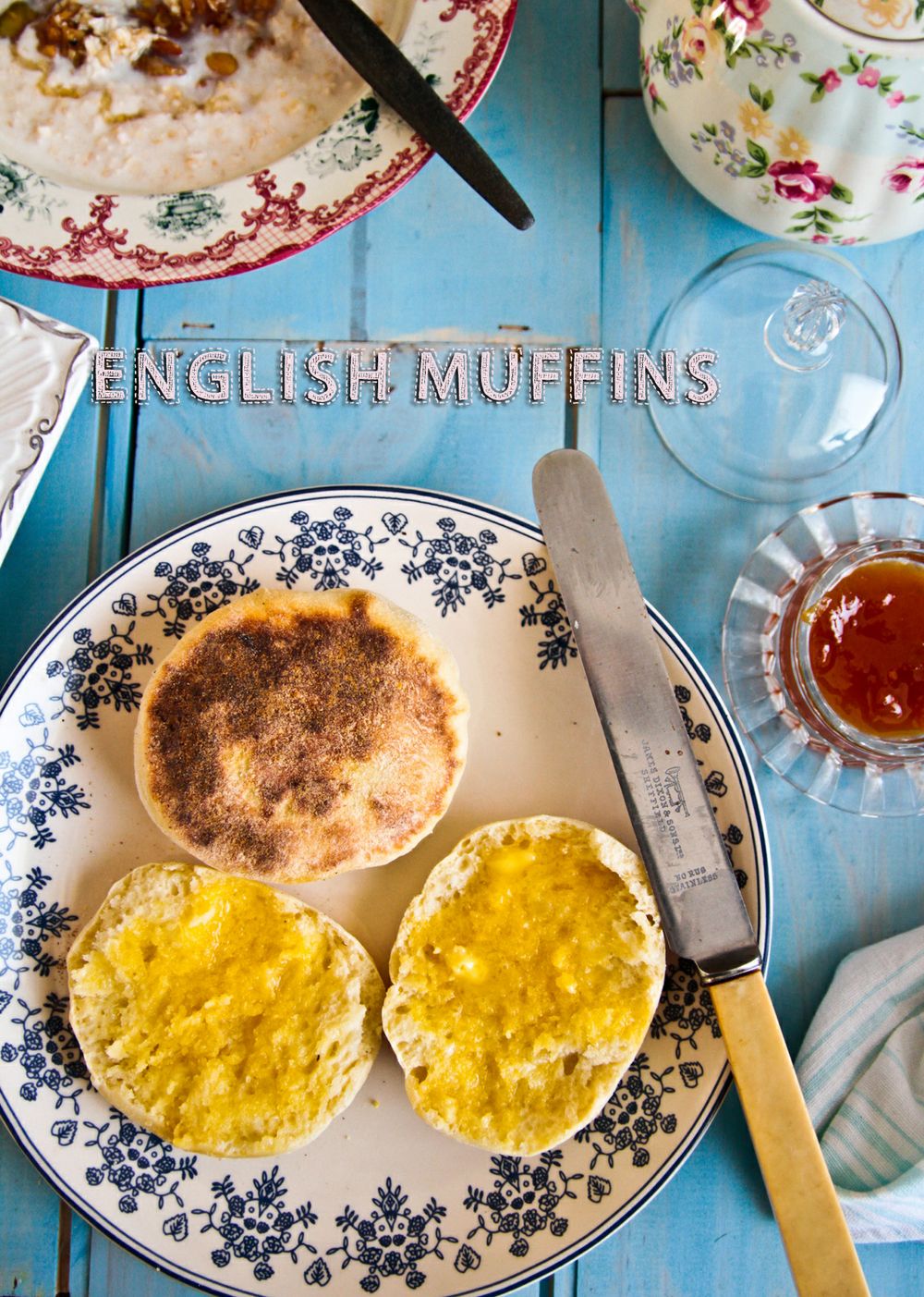 Mr NQN and I were sitting in front of the television and I was leaning against him. I looked up at him and was telling him handsome he was from that angle.

"You're so delicious-even better than chocolate! You're a muffin!" I said to him smiling, stroking his cheek. And then, totally accidentally (I swear!) I stabbed him in the neck with my long manicured thumbnail.

"Arrrgh....thanks for stabbing me" he said grimacing and rubbing his neck. I could see that he wanted to point out my clumsiness but because I was being nice to him beforehand, thought better of it.

To call someone a muffin is a sign of affection. A muffin can be a sweet thing, much like an uniced cupcake or you can have an English muffin which is nothing like a cupcake. It's really like a bread roll. We've been eating a lot of these lately with the cold weather they're perfect slathered in butter and jam. They're also an item I often pull from the shelf and wonder why I couldn't just make my own when a packet is over $4. So one day I got fed up of buying them and made a batch of fourteen English muffins.

They're actually much simpler to make than you could ever dream up and because there is both yeast and baking powder, they rise beautifully and produce delightfully soft muffins. They don't last quite as long as the store bought so I split any ones that we weren't eating that day and stashed them in the freezer to defrost and serve with butter and jam. But if you're ever in the mood to make some, try these and you won't be disappointed.

So tell me Dear Reader, what is your favourite term of affection for someone? And do you prefer cake muffins or English muffins? 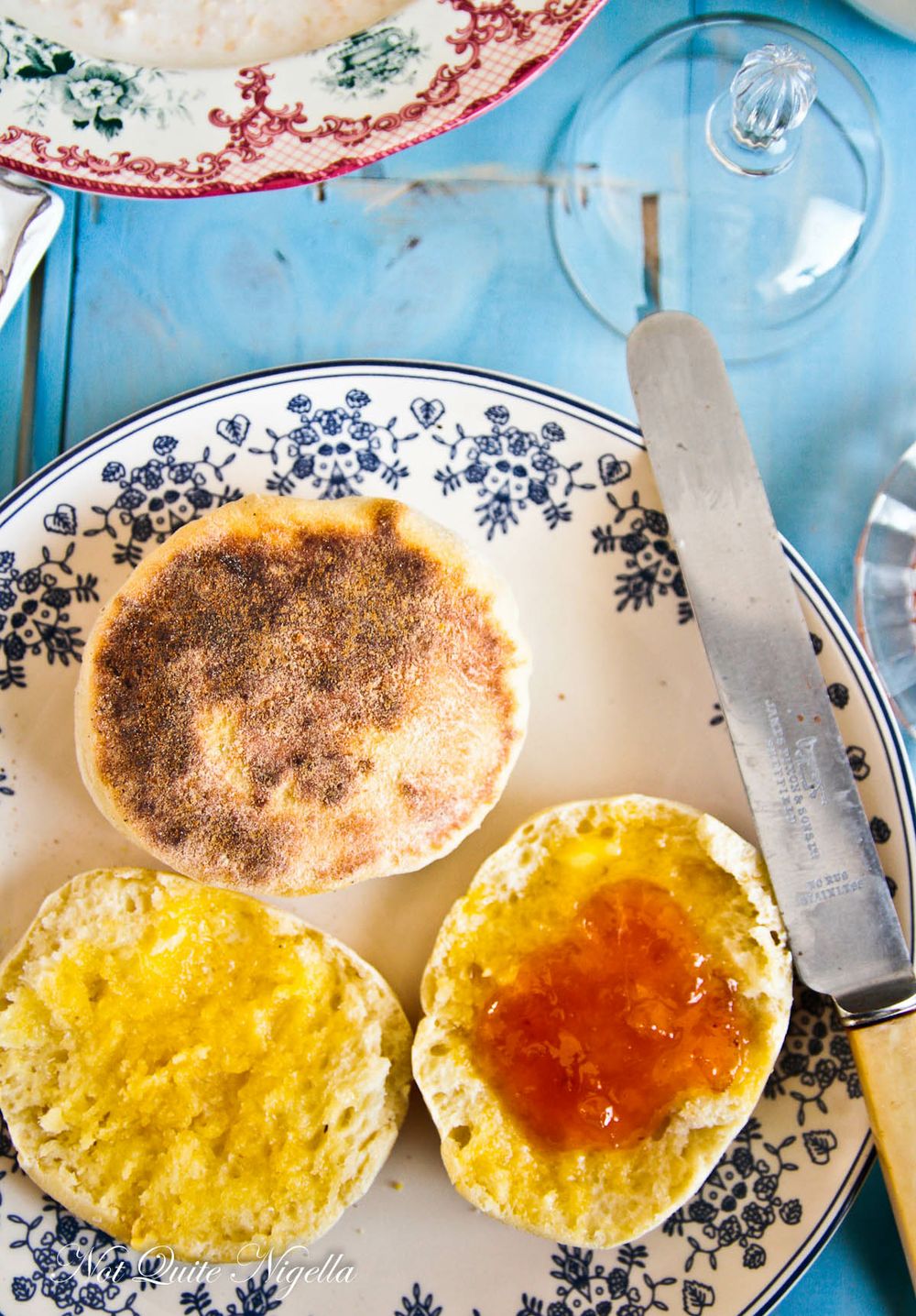 Step 1 - Heat milk and sugar until lukewarm and the sprinkle over with the yeast. Cover with cling film and allow to become frothy-about 10 minutes. 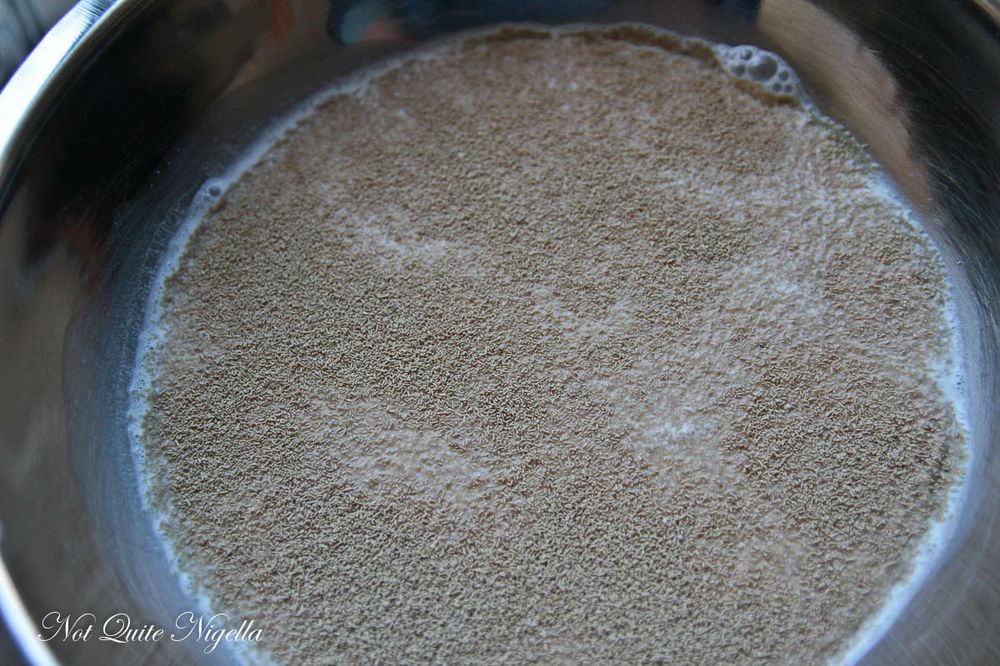 Step 2 - Place the butter, flour, salt, baking powder, egg and yeast mixture in a bowl and knead by hand for about 8 minutes or with a dough hook (5-6 minutes) until the dough becomes elastic. Place back in the bowl (make sure that it's clean) and cover with cling film and allow to rise in a warm draught-free place for about 1 hour-it has lots of yeast and baking powder so it should rise to double or triple its original size. 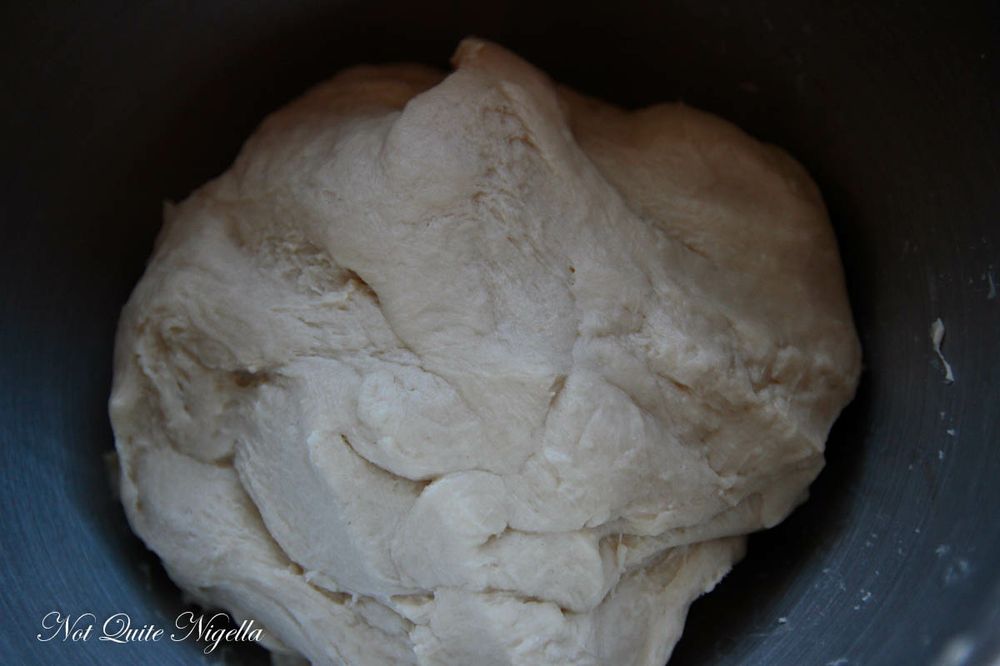 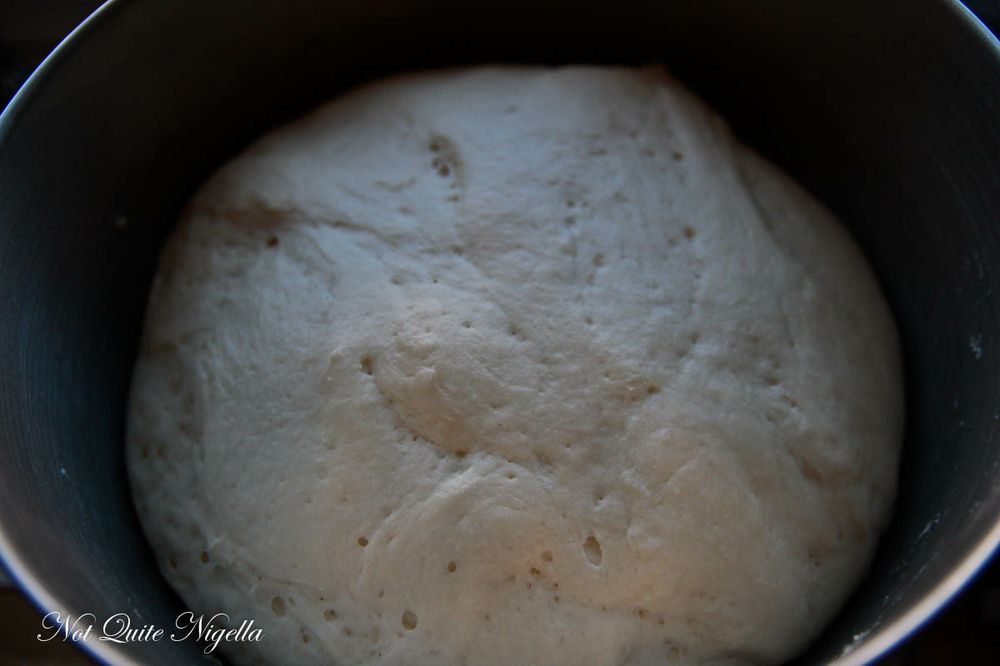 Step 3 - Place the cornmeal in a shallow bowl and line a large baking tray with parchment or foil. Punch down dough and knead lightly and shape into a round. Place on a floured surface and roll out to one inch thick. Cut out circles using a flour dipped cookie cutter or even an clean empty tin-mine were 8.5cms/3.4inches in diameter. Dust tops and bottoms with the cornmeal and set aside on the lined tray. 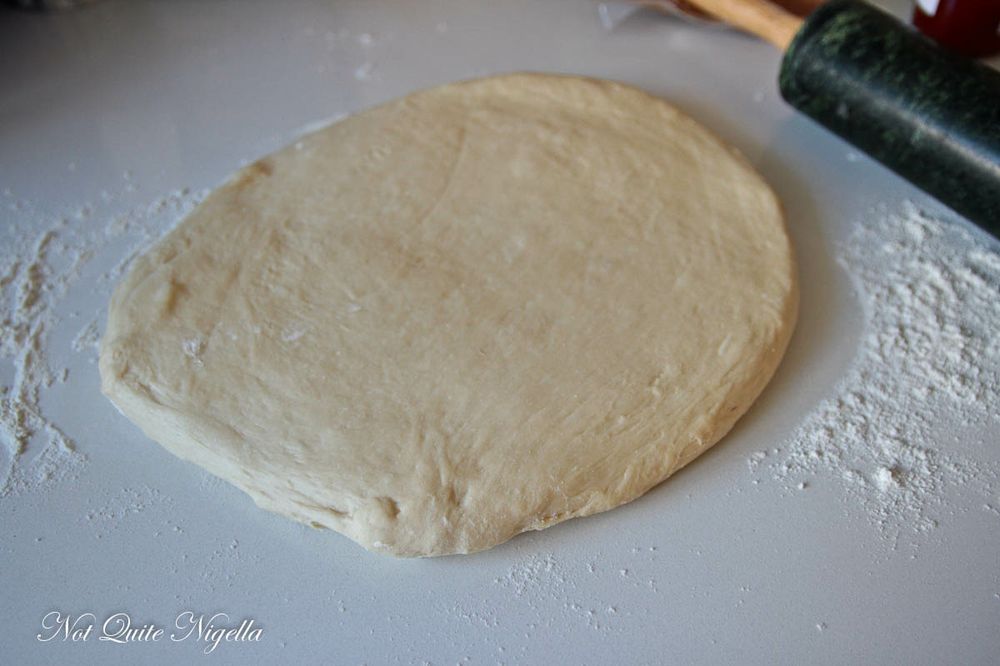 Rolling dough out to 1 inch thick 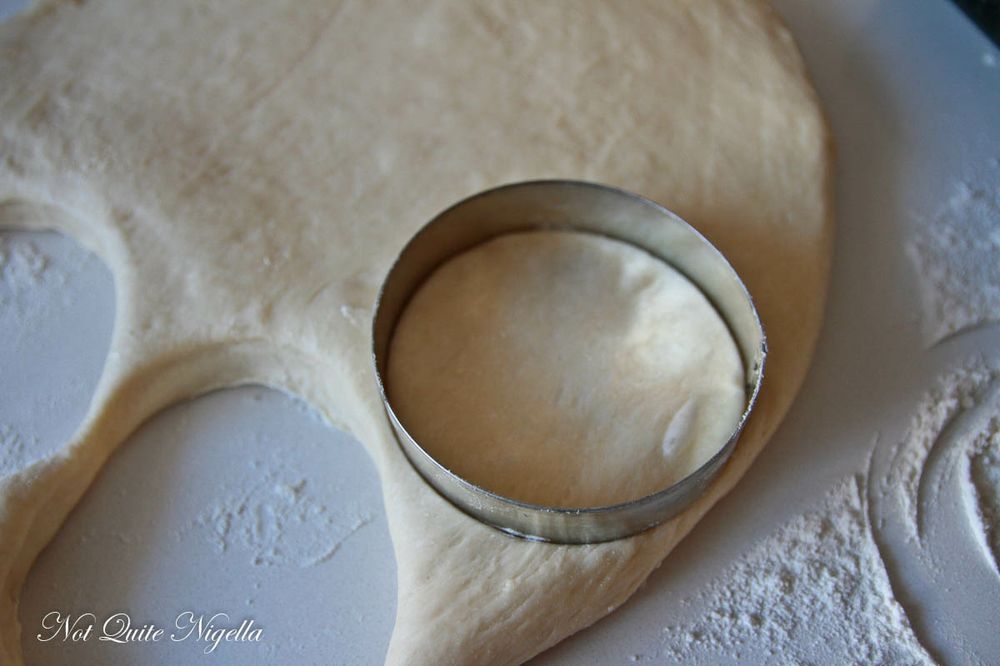 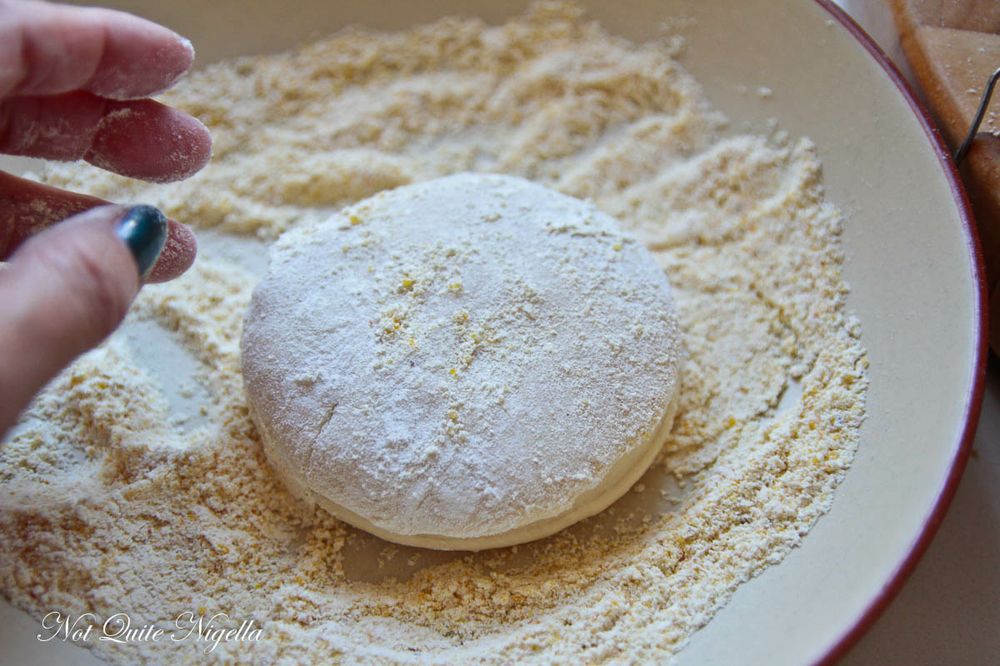 Step 4 - Preheat oven to 160C/325F. Also heat a frypan on low heat (about 3 out of 10 with 10 being the hottest) and without adding any oil, cook the dough rounds making sure to brush away any excess cornmeal. Cook them for about 3 minutes on each side and make sure to put the lid on while they are cooking. Place the now browned muffins back on the lined tray. 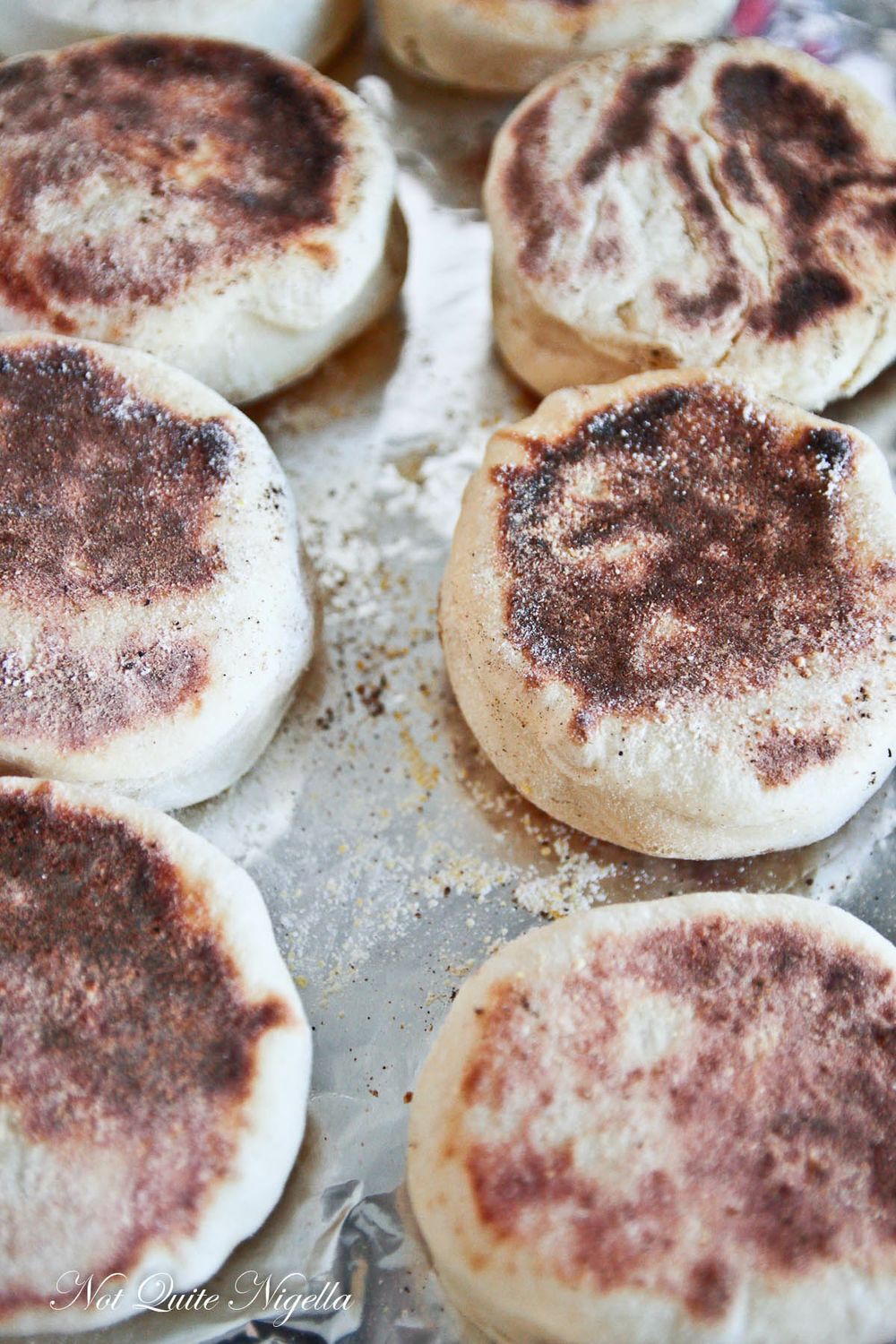 Step 5 - Then to make sure that they're completely cooked inside, bake the now browned muffins for 15-20 minutes. You can do this completely on the stovetop skipping the oven step but it's more time consuming if you have a small pan as you need to cook them for about 7-8 minutes on each side and doing it in the oven is speedier unless you have a big grill. Once baked, cool for 5-10 minutes and then split with a fork-you do this by sticking the tines of a fork into the centre and pulling the two halves apart gently, they will make their own divide down the centre. 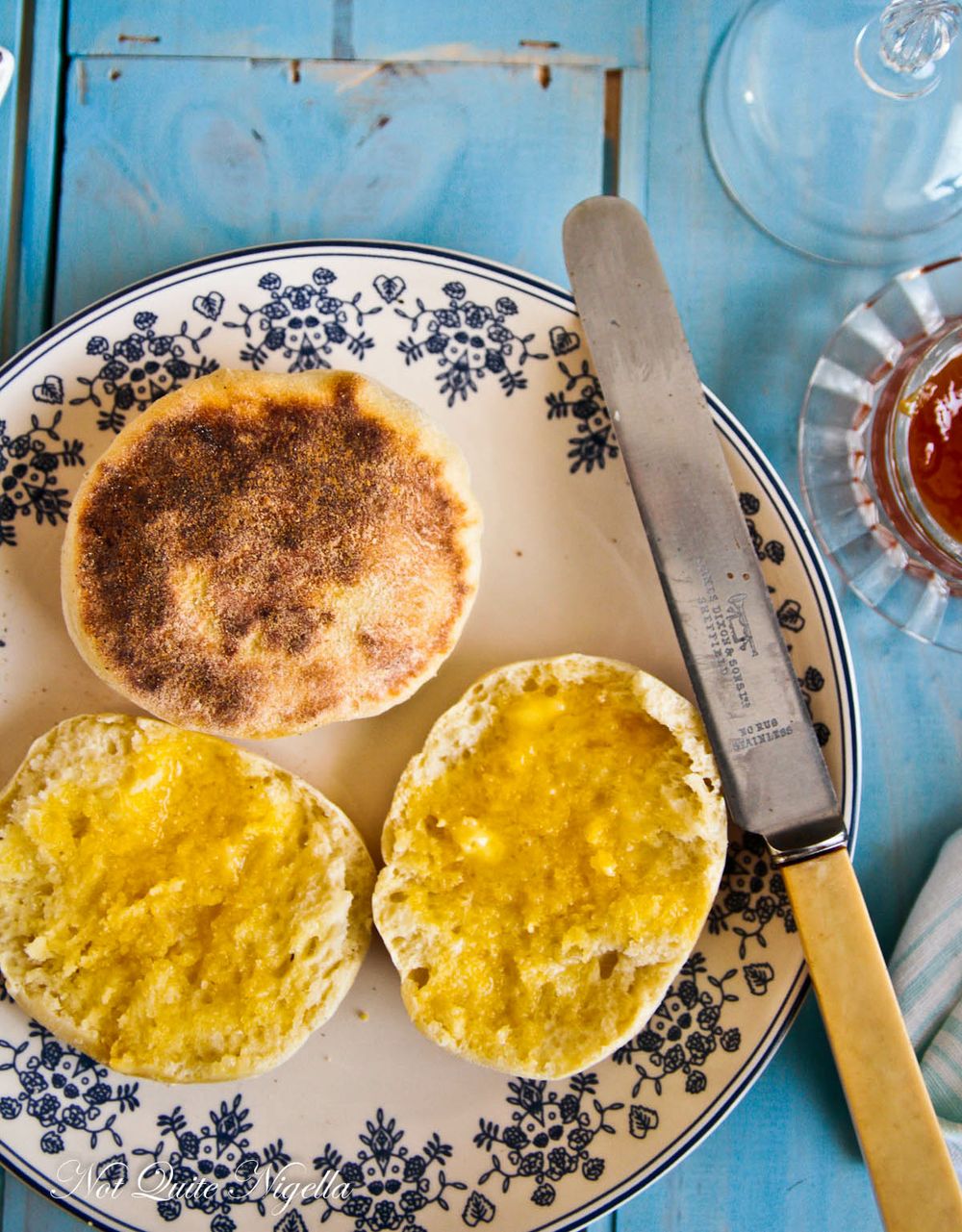