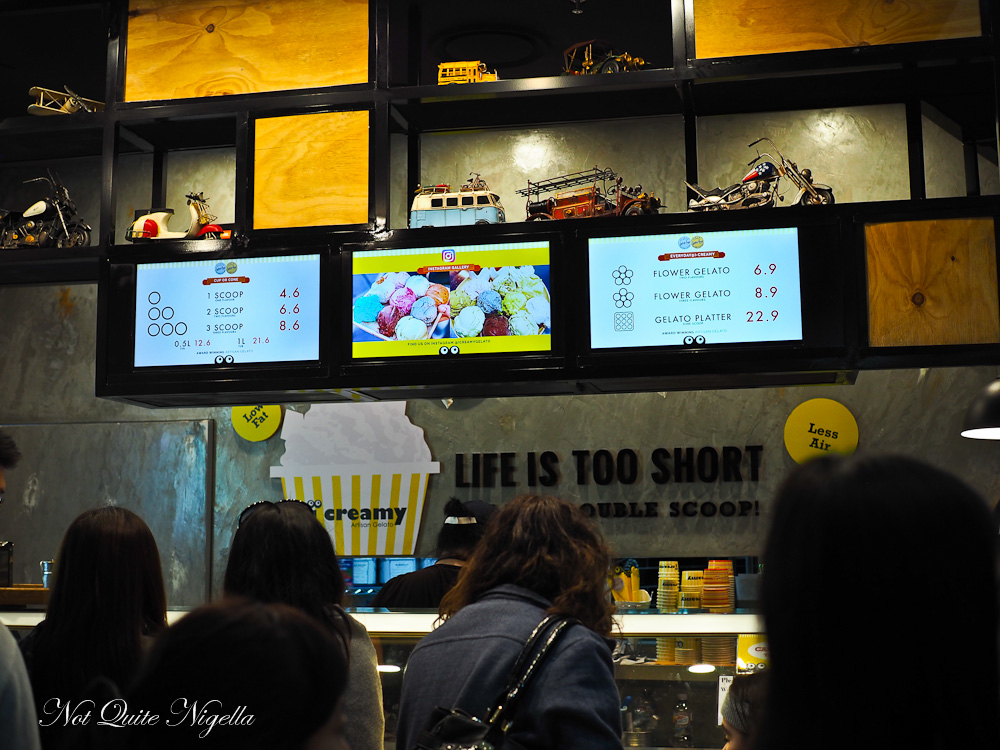 There are two types of people that visit i-Creamy gelato. The first is someone, not surprisingly that wants a gelato. The second is a person, usually one that possesses an Instagram account that is patiently waiting in the long queue for a flower gelato. It is the latest trend in iced couture-your very own gelato shaped as a flower in the colours of your choosing. And it has hit Sydney's George Street. 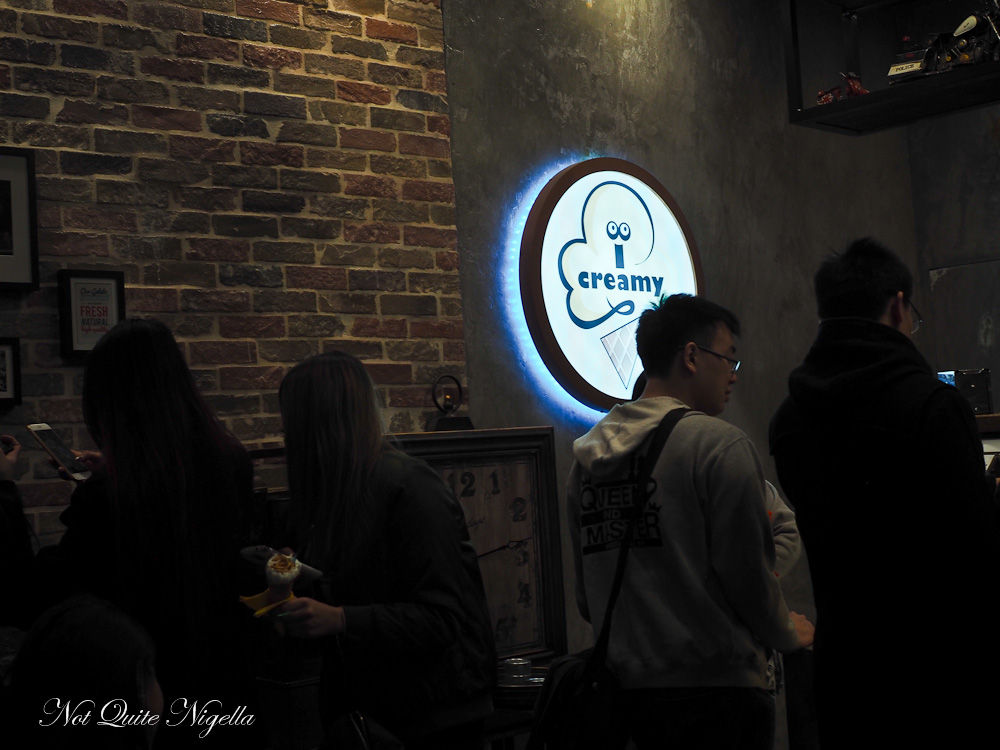 Thailand is the place where many creative ice cream ideas come from and given the weather it's no surprise. The [Three Mama Chef's scroll ice cream][4abe2e12] is one idea that has come to Australia and the flower gelato is another. Like the scroll ice cream it is a time consuming process. At i-Creamy in the Skyview Shopping Plaza on George Street, orders snake around the corner with the end of the queue not in sight as each petal is individually applied.

There are a total of 24 flavours of Italian style gelato available each day at i-Creamy. Not every flavour can be made into a flower gelato though and on the night we visited there were five to choose from marked with a green clover. There is a mysterious pinky milky, a vivid blue bubblegum, Thai milk tea, coconut and green tea. The flavours are made every day and change every day and you can get a choice of two coloured flowers ($6.90) or three colours ($8.90). Or regular gelato of course. 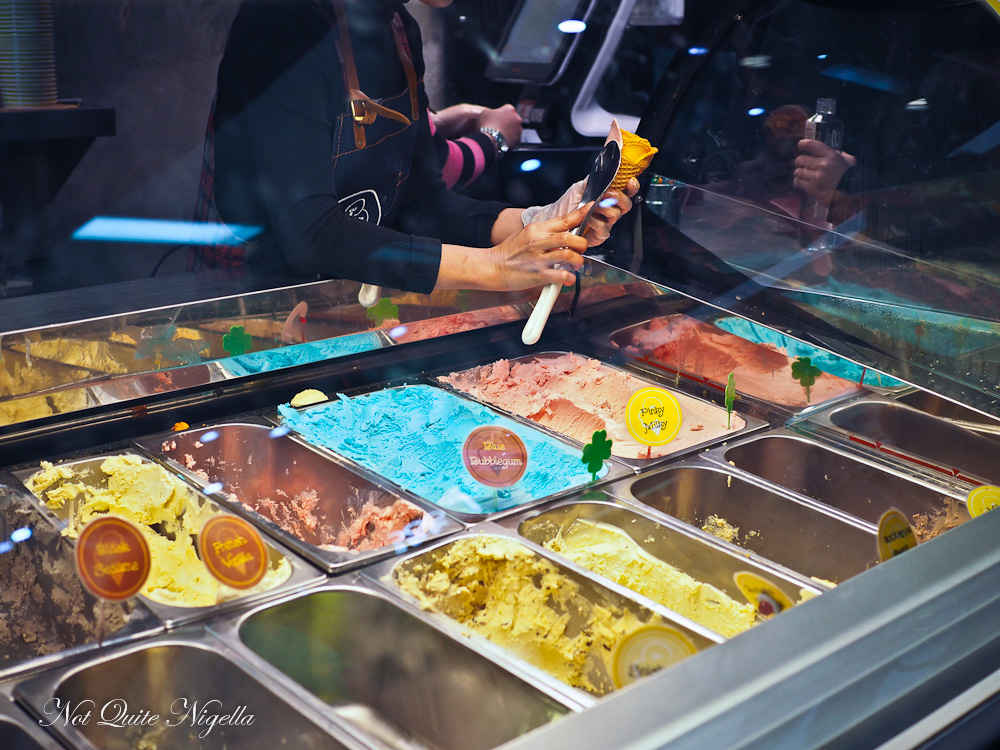 Each flower is constructed around a waffle cone. It starts off much like a fondant flower, with a small mount of ice cream with a peak. Around this the ice cream artisans take a small flat piece of ice cream and gently smoosh (that's a technical term ;) it to apply it onto the ice cream and cone. Each petal is put on individually which is why the lines take so long (pro tip: get parking for about an hour, it's that long on busy nights). 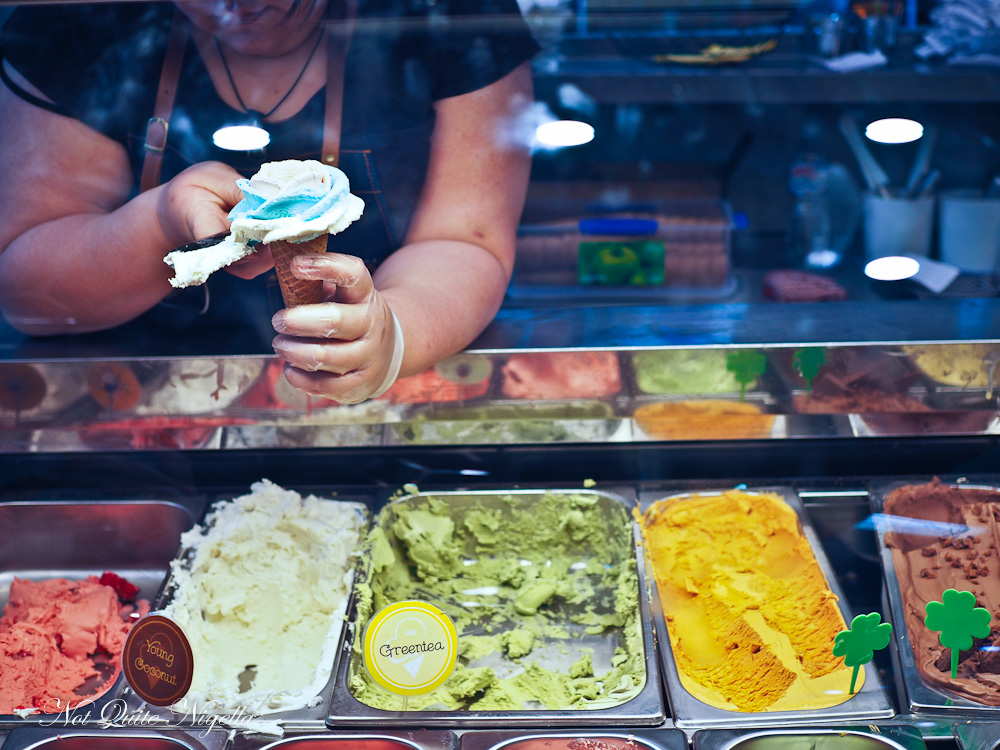 Want to see how they are made?

After a while my pink, blue and white flower gelato is ready and JY's pink, brown and white one is ready shortly after. I made a poor decision right off the bat: blue is bubblegum and yes I got exactly what I paid for. Bubblegum ice cream which I don't even recall liking as a kid but sometimes you are attracted to the bright colours. The milky pink is a flavour that my brain initially calls strawberry milk but then I'm not sure. JY too is perplexed by what it is. 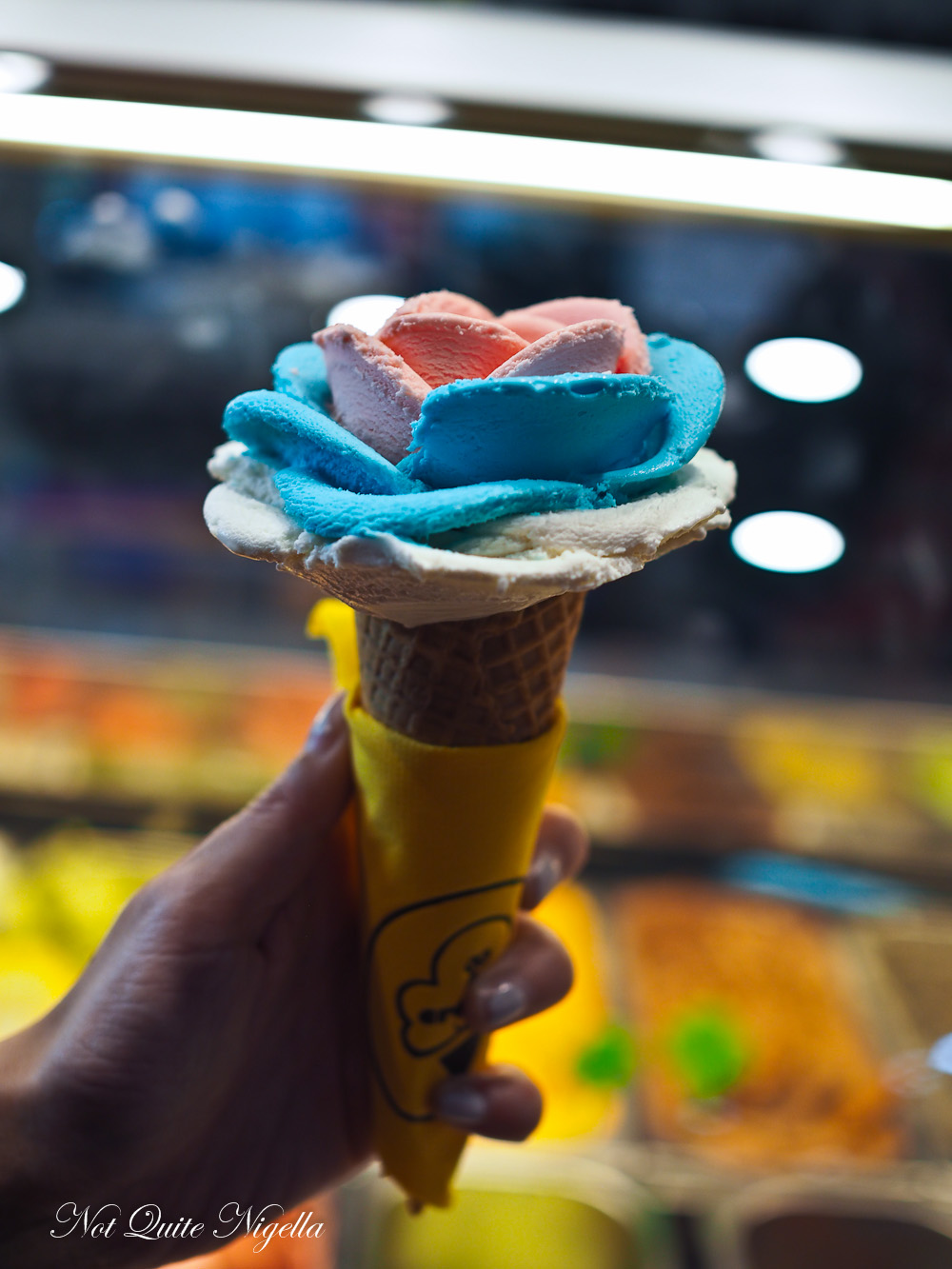 "Do you think that they just called this the first thing that came to their mind aka pinky milky?" we ponder aloud. The coconut flavour however is really creamy and delicious and true to flavour as is the Thai milk tea. I'm guessing the biggest tip is to stick to Thai or tropical flavours. And while you might want four or five to make a nice pic they won't entertain your request during busy times as the lines and back up orders are too long. Plus I don't imagine that it would taste all that great together. 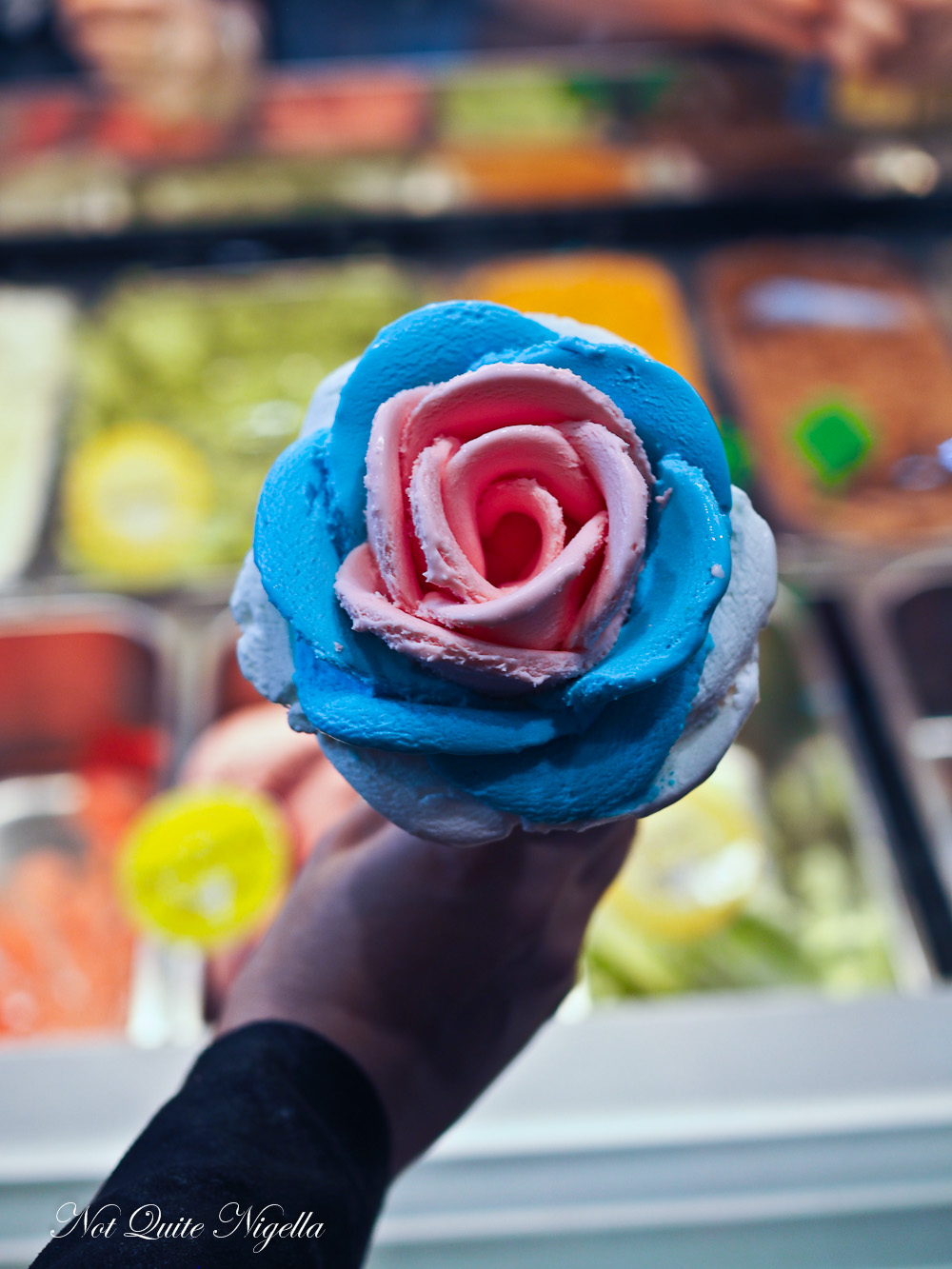 The ice creams are actually quite sizeable too and if you want to slow down to eat them you'll have to pay 50c for a cup to put it in. But I'm defeated by the blue. I want to keep licking the coconut but the blue gets in the way. I guess the moral of the story: never get the bubblegum flavour or never do something just because you think it will make a nice photo ;) I guess you're never too old to learn a lesson.

So tell me Dear Reader, what do you think of the flower gelato? What combo would you have chosen? And would you go for two or three colours? And do you ever choose foods or things to make a great photo?

These gelatos were independently paid for. 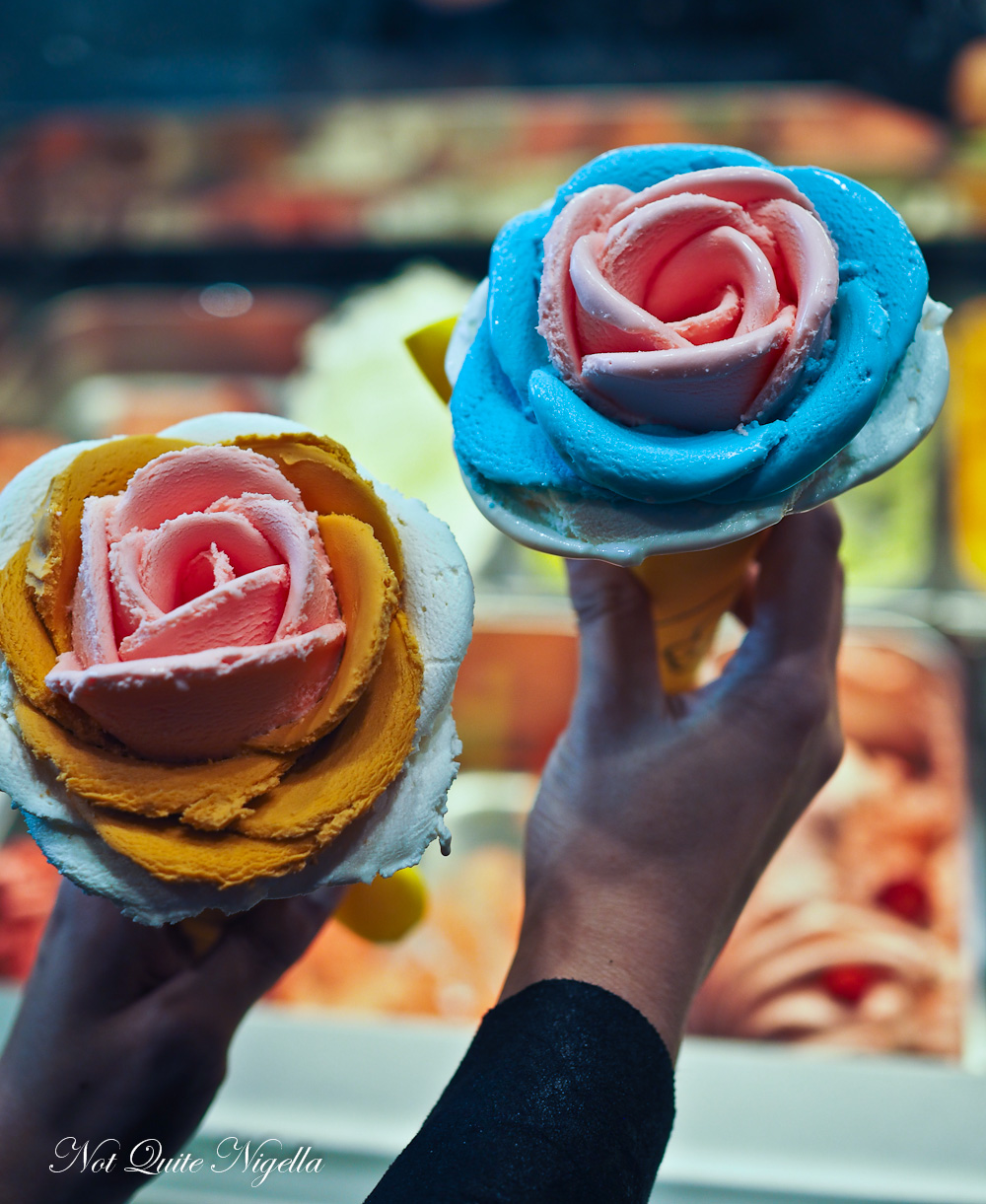