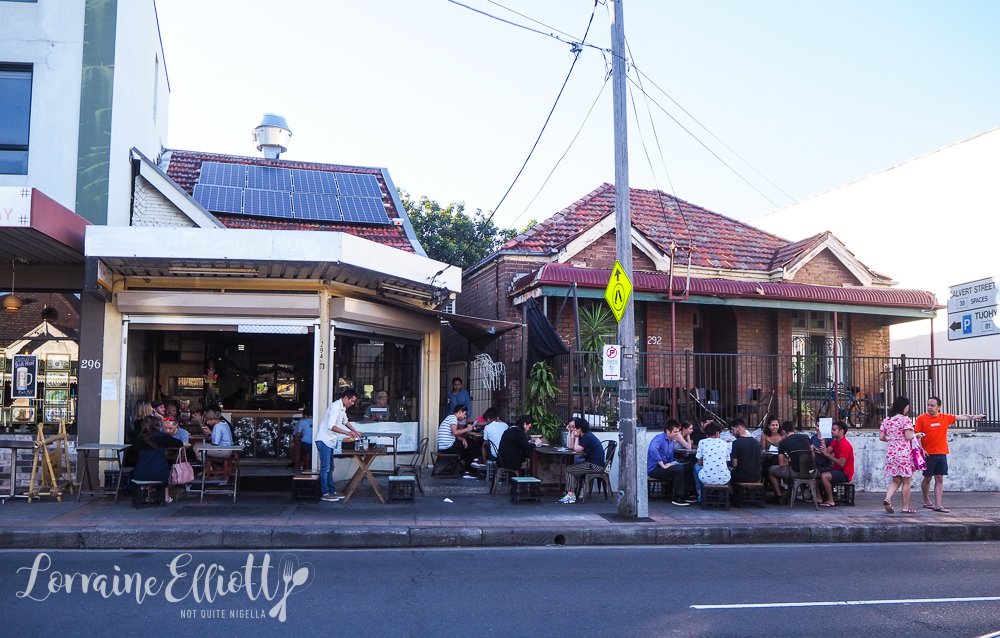 VN Street Foods is an unassuming Vietnamese eatery that serves up delicious dishes that go beyond the usual offerings. There's a tasty, crispy egg omelette with squares of crispy rice cakes topped with pork, or a Bun Cha, a flavoursome bowl of soft, sweet pork belly served with rice noodles and fresh herbs. And delightfully, most dishes are around the $11 mark! 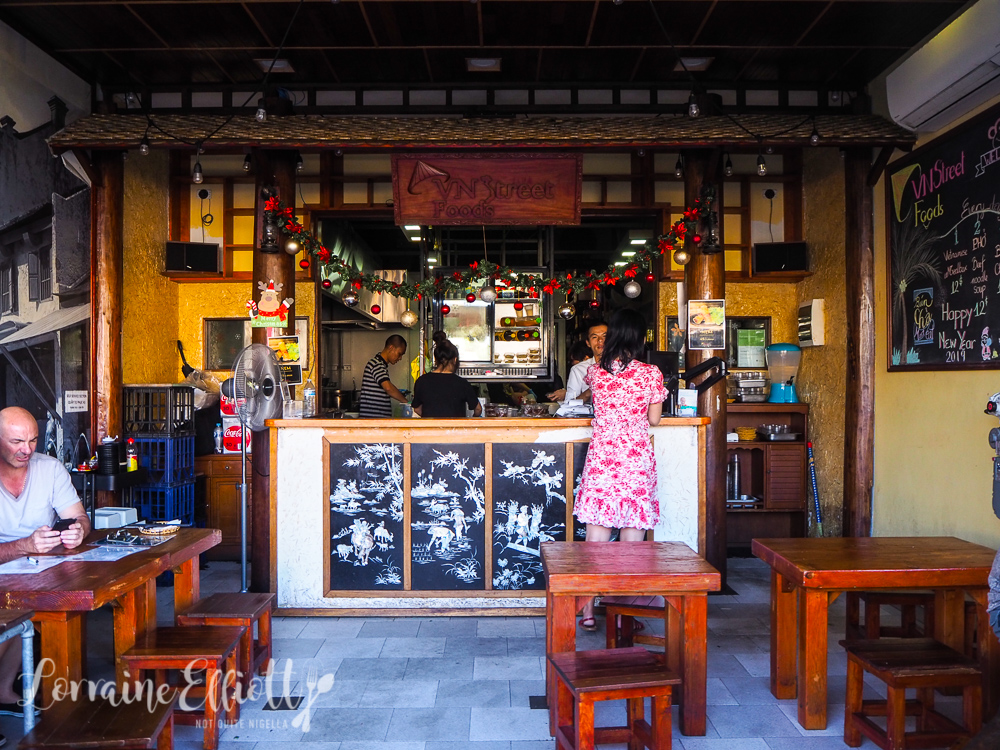 I had been saving up a trip to VN street foods til when we had Mochi because of their large outdoor seating area. That night was Sunday and it was a perfect balmy summer's night with a cool breeze. Little did I expect the sight that greeted me when I walked in.

That afternoon I had stalked the menu online and chosen what I wanted to order. The only problem is that it involved 6 dishes and for 2 people that may have been too much (may have been? Okay it was). 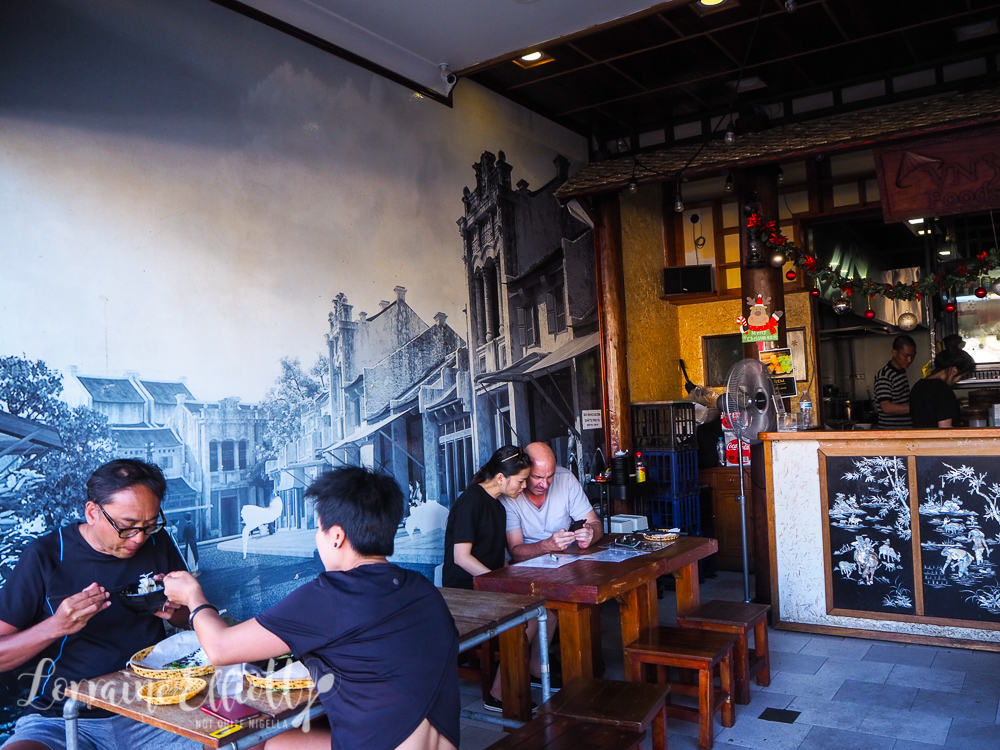 Mr NQN took a seat outside with Mochi while I went in to order. I looked at the counter and I saw my friend JY's boyfriend Ben. JY turns around after seeing her boyfriend give me a quizzical look. "What are you doing here? OMG!!" we ask each other. They've already ordered and we haven't yet but we decide to sit together and share our food.

The system here is that you grab a laminated menu and circle what you want with the whiteboard marker. There are two menus. One is sort of more a regular menu but I'm drawn in by the other menu with an interesting range of things (it is on the B side of the drinks menu). You pay at the counter and take a number to your table. 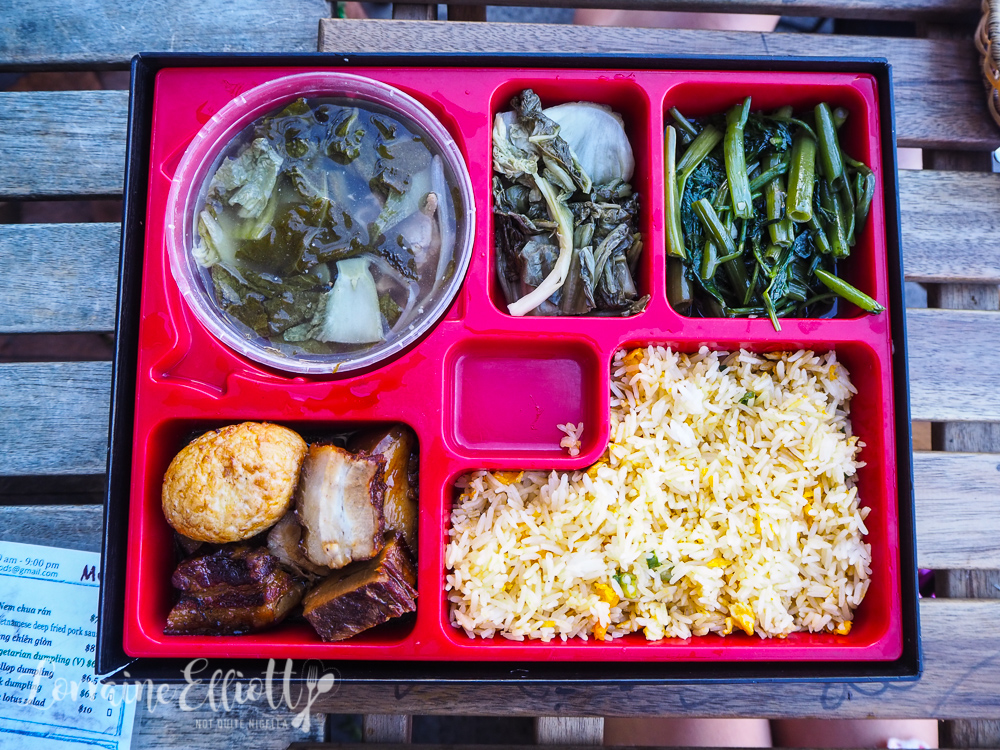 First comes out Ben and JY's meals. These are bento boxes of which there are 6 different kinds and you can also customise it. JY's is Bento Box #1 that has stewed pork belly and egg, stir fried kang kong, green mustard pickle, potato & carrot soup while Ben's has betel leaf beef rolls and a melon and shrimp soup. 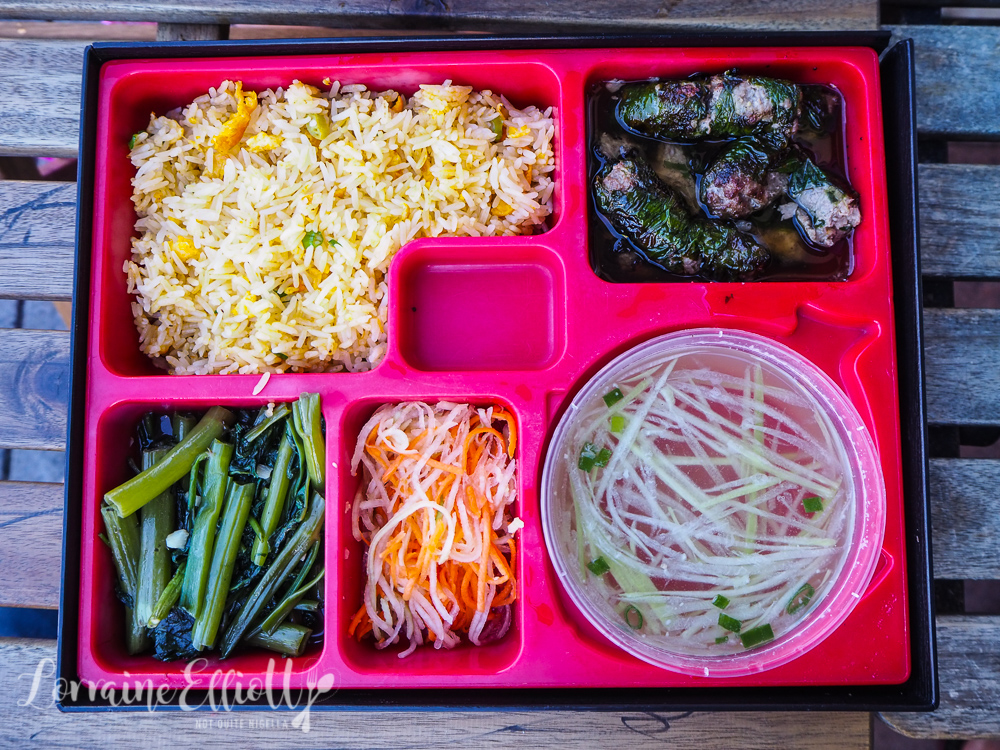 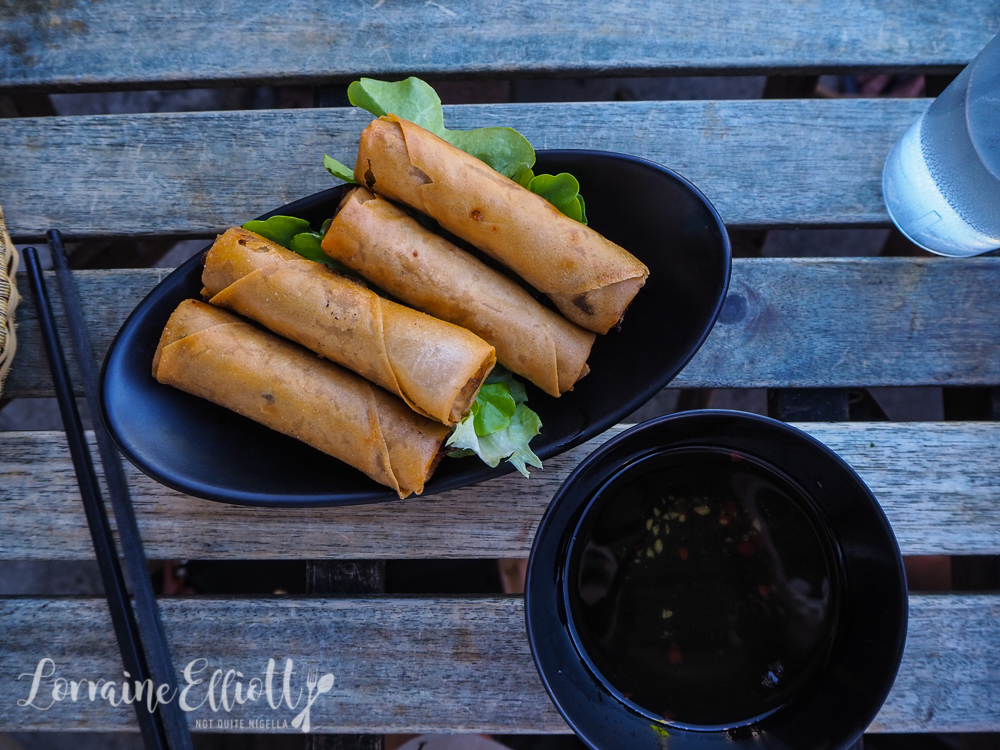 I try some of their spring rolls and they're really crispy and delicious with a nice hit of black pepper to them. Usually I can take or leave spring rolls but I would definitely order these again. 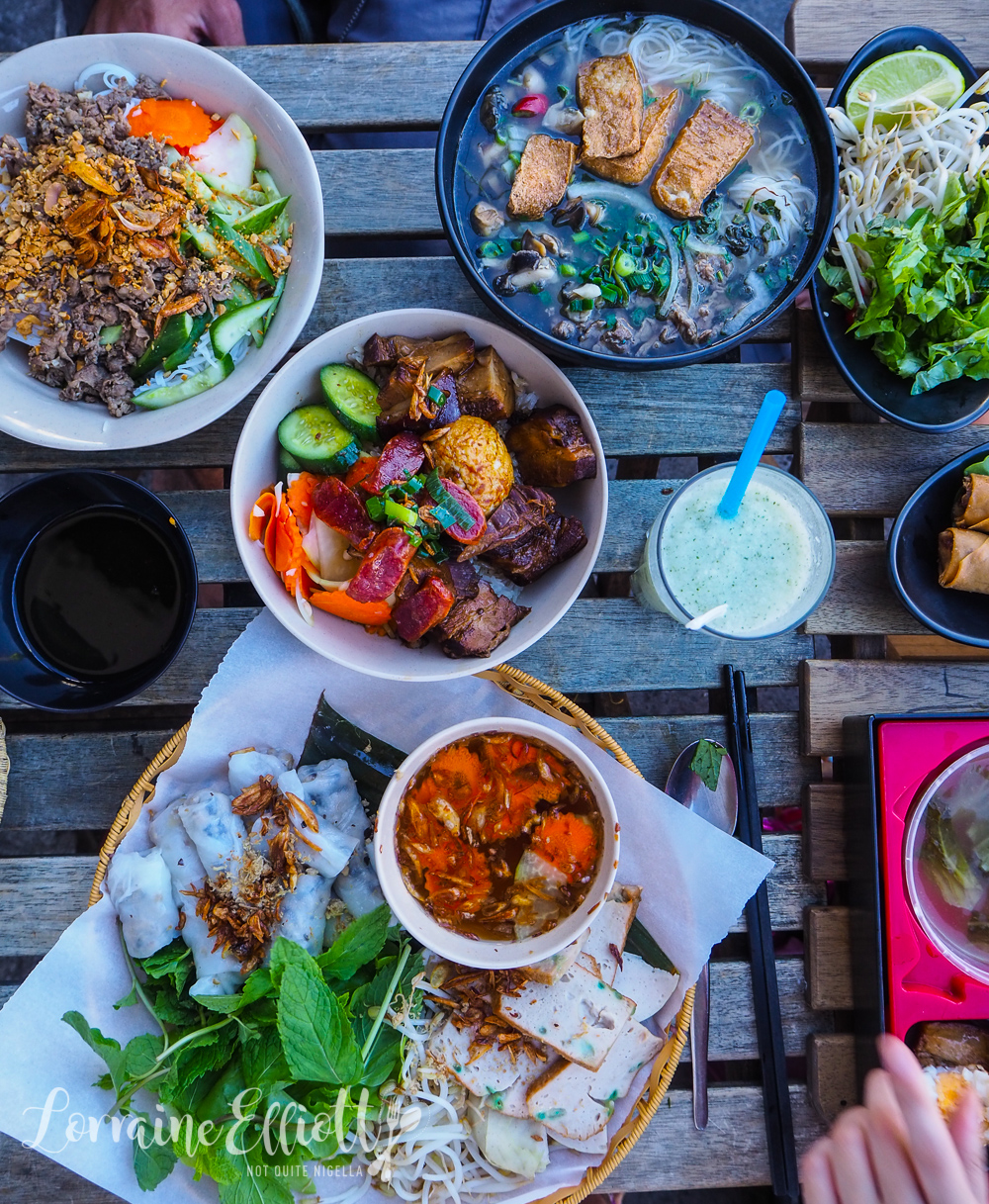 Our food comes out surprisingly quickly and because I ordered so much it sort of covered the table - enough that they pull up another table. 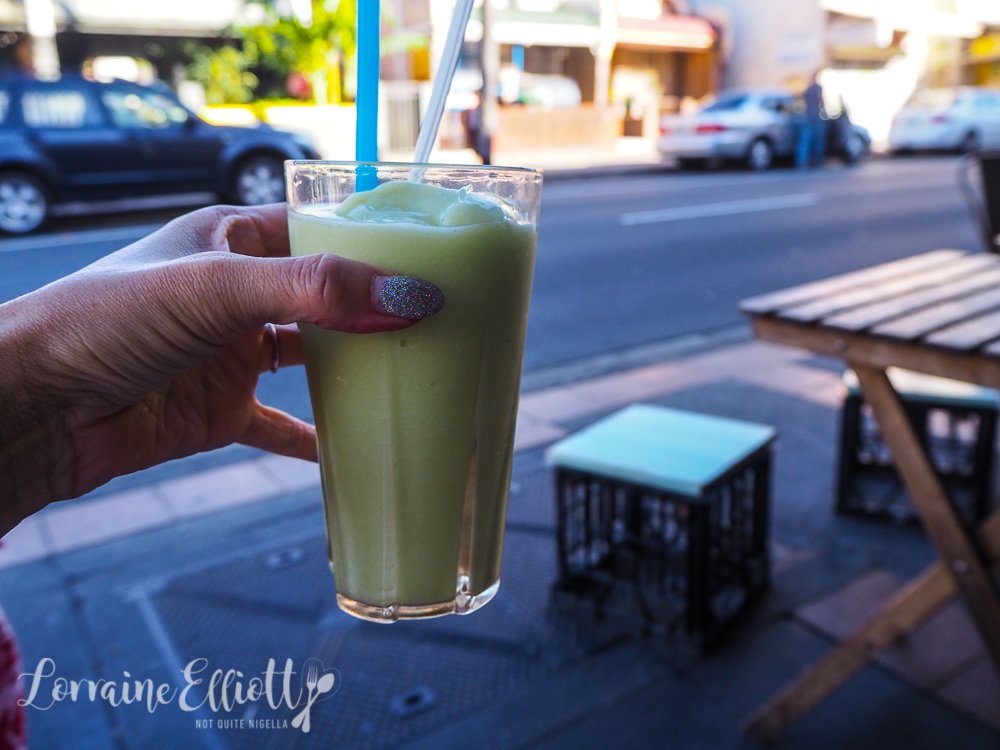 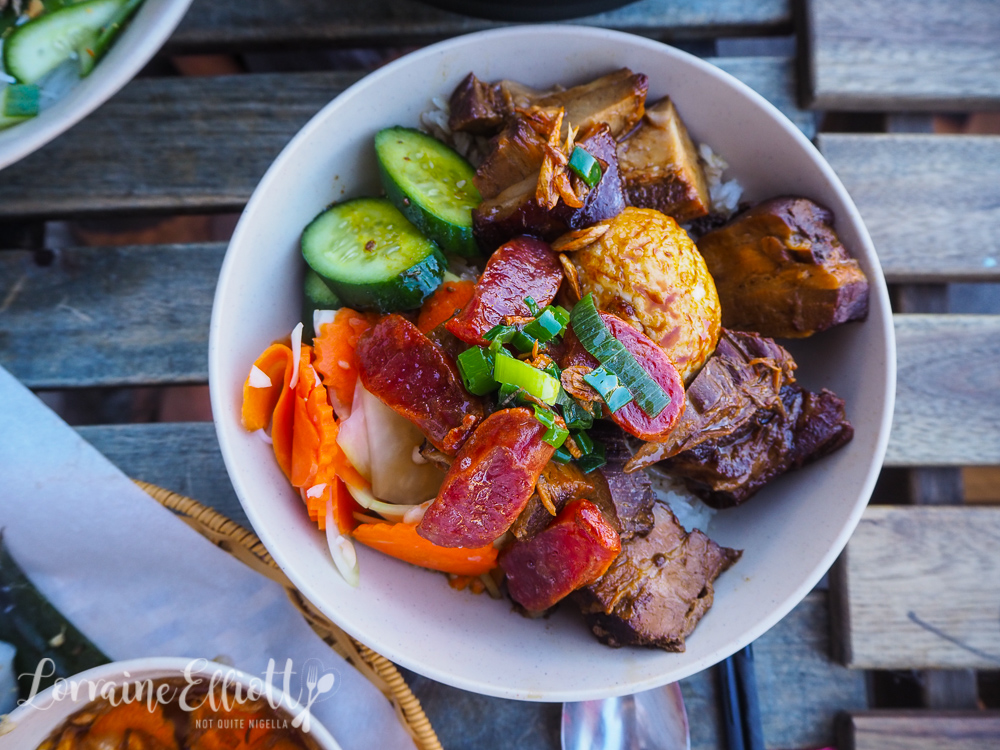 Food wise, the Xoi Thit Kho is a bowl of steamed sticky rice with stewed pork belly and egg with an extra upgrade of lup cheong, that flavoursome fatty pork sausage. I adore sticky rice and this was such a well flavoured dish with plenty of topping with a good rice to meat ratio. 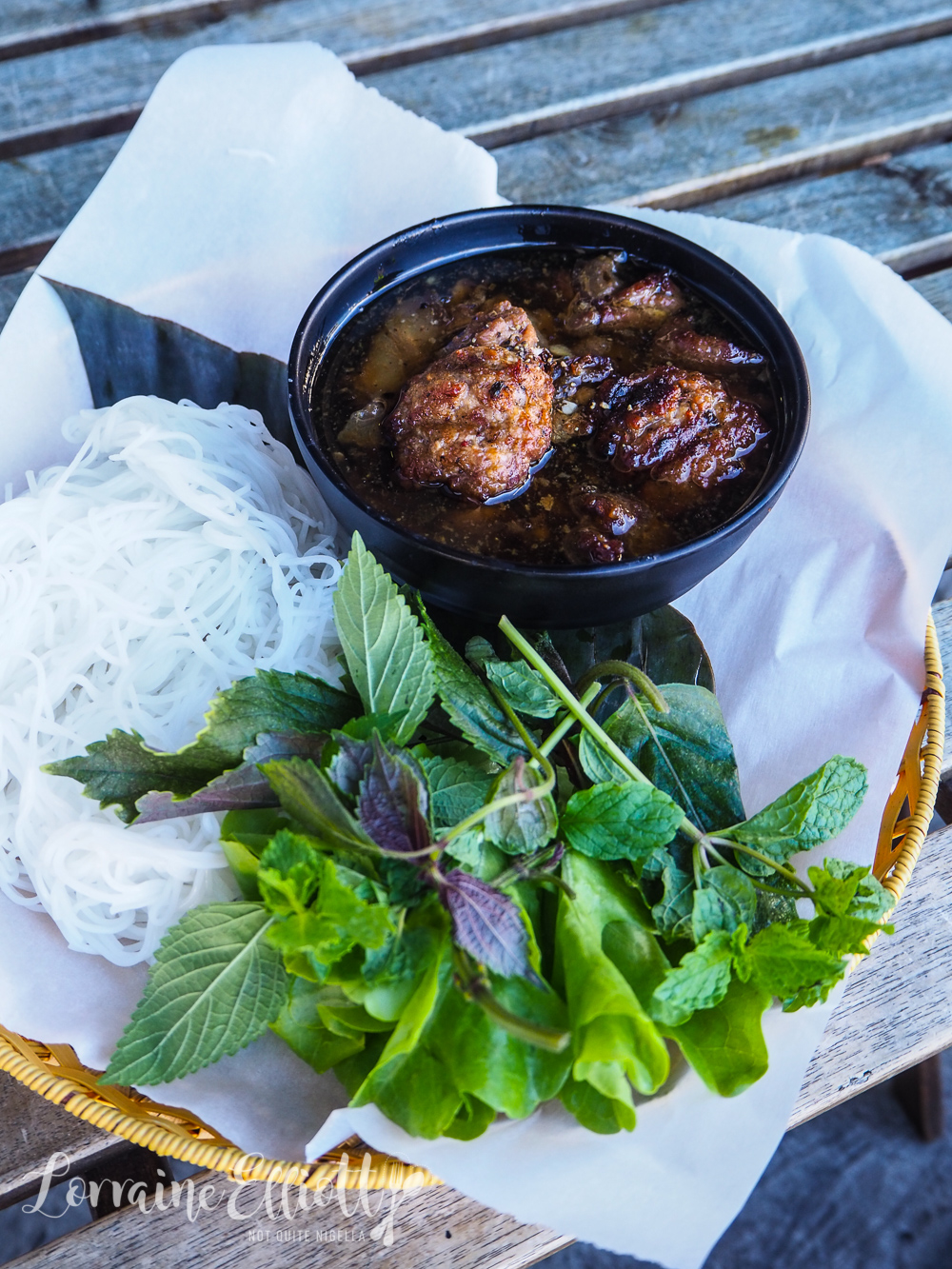 This is one of their specialties. I added in some meatballs to the grilled pork and I'm so glad that I did. First things first, this is not a dish for those that don't like oil because there is a bit of an oil slick on the top. But that's flavour in there. The soup, meatballs and slices of lemongrass pork are bursting with flavour. There are also a few vegetables in the soup but not many. There's also a big pile of vermicelli noodles and fresh herbs to the side. This is such a resounding hit with everyone at the table. 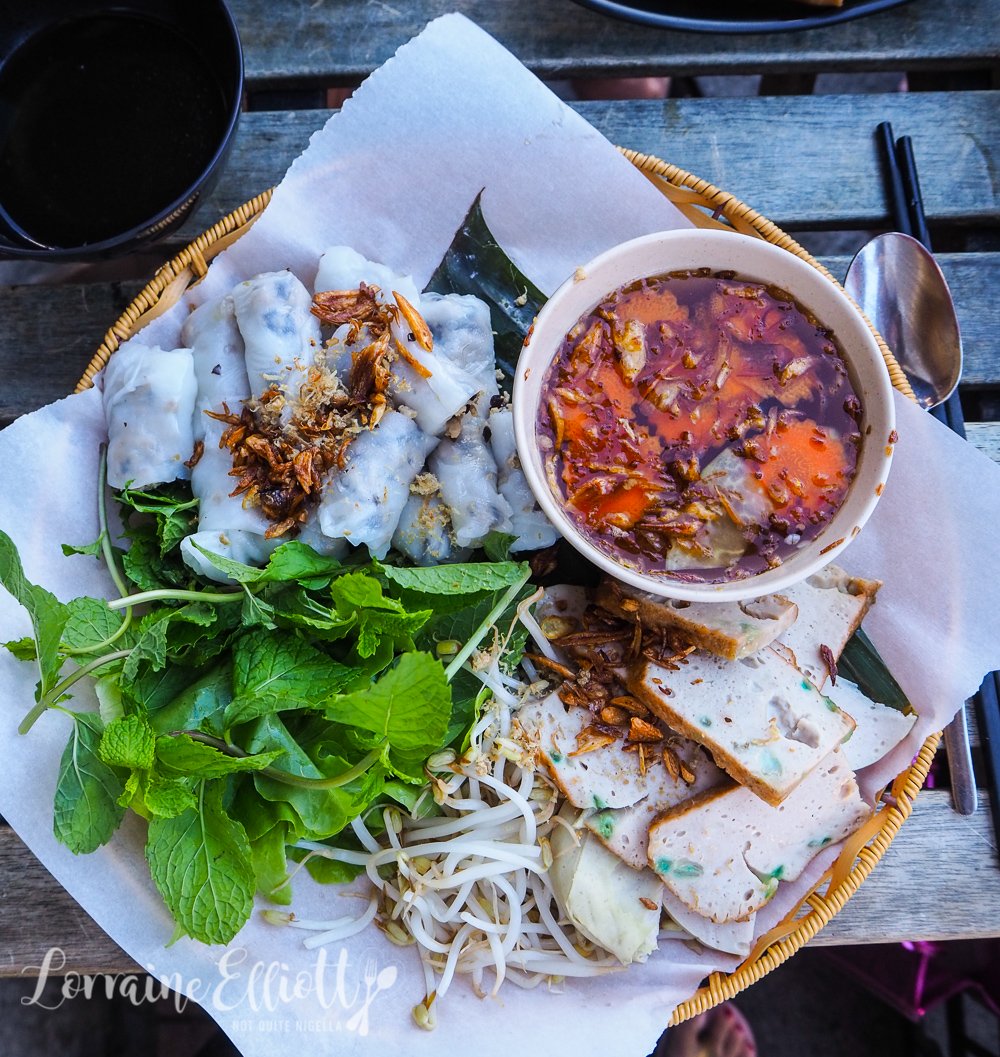 This is an enormous dish and warrants a slightly higher price tag than the rest that all hover around $11. There is a soup with vegetables that accompanies a rice roll with pork mince inside. There are also slices of a Vietnamese pork luncheon meat. It's very tasty and fresh at the same time although the same could be said about most of these dishes. 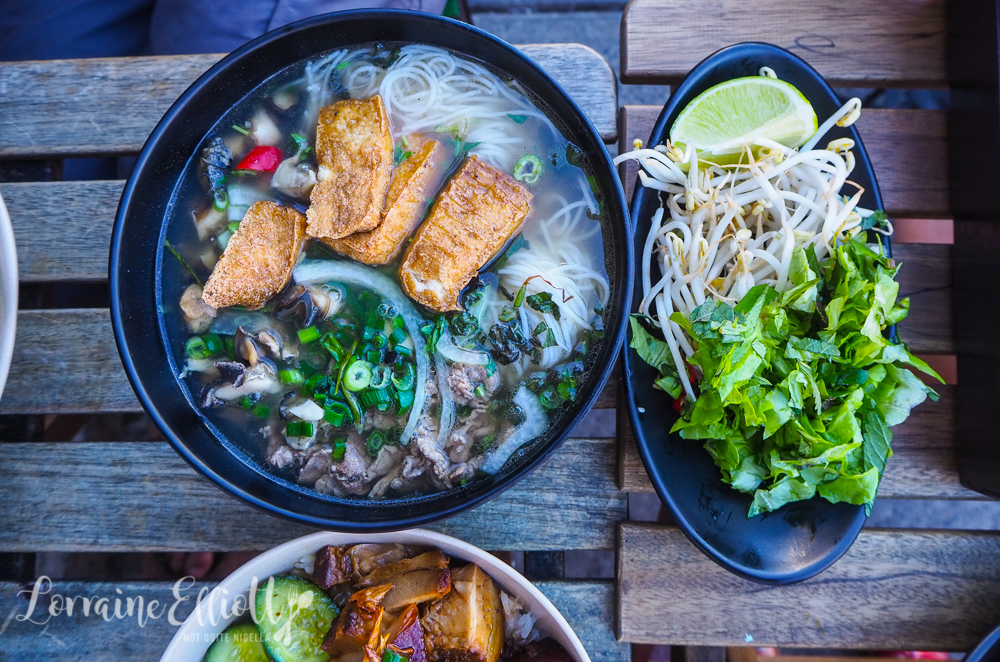 You know the part where you order something because it looks interesting in the picture but you have no idea what it is? That was the Bún ốc or as I later learn the escargot or snail noodle soup. The snails are roasted giving them a chewy texture, sort of like cartilage. Bún ốc hails from Hanoi and has large chunks of fried tofu and shiso on top as well as salad and a wedge of lime on the side to add in as you please. 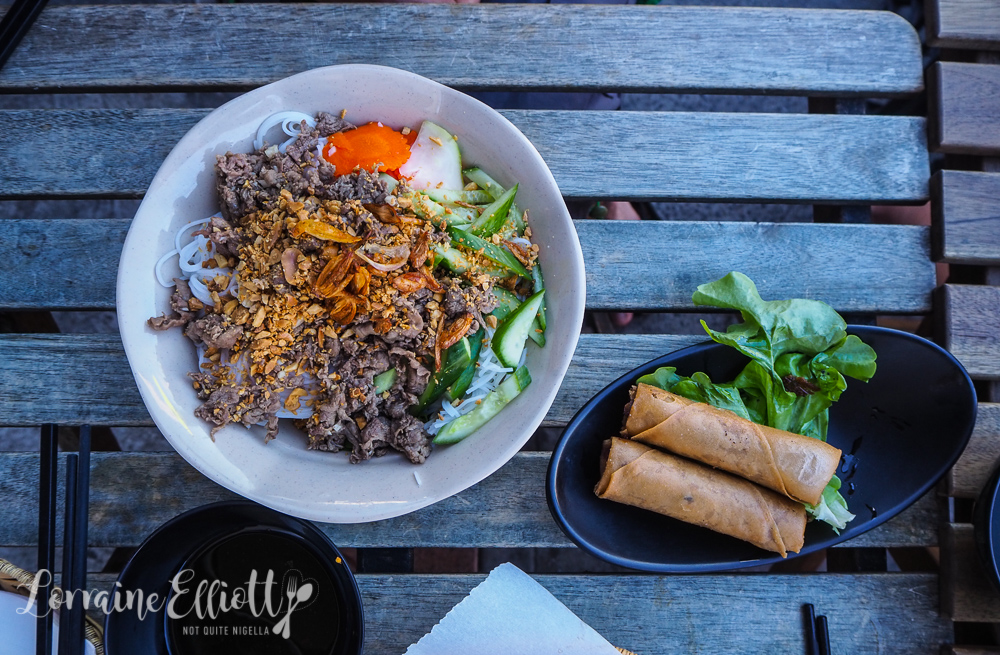 The only dish that we didn't really go for was the classic bun salad of beef and vermicelli rice noodles. It was a bit mild in comparison to the other dishes. 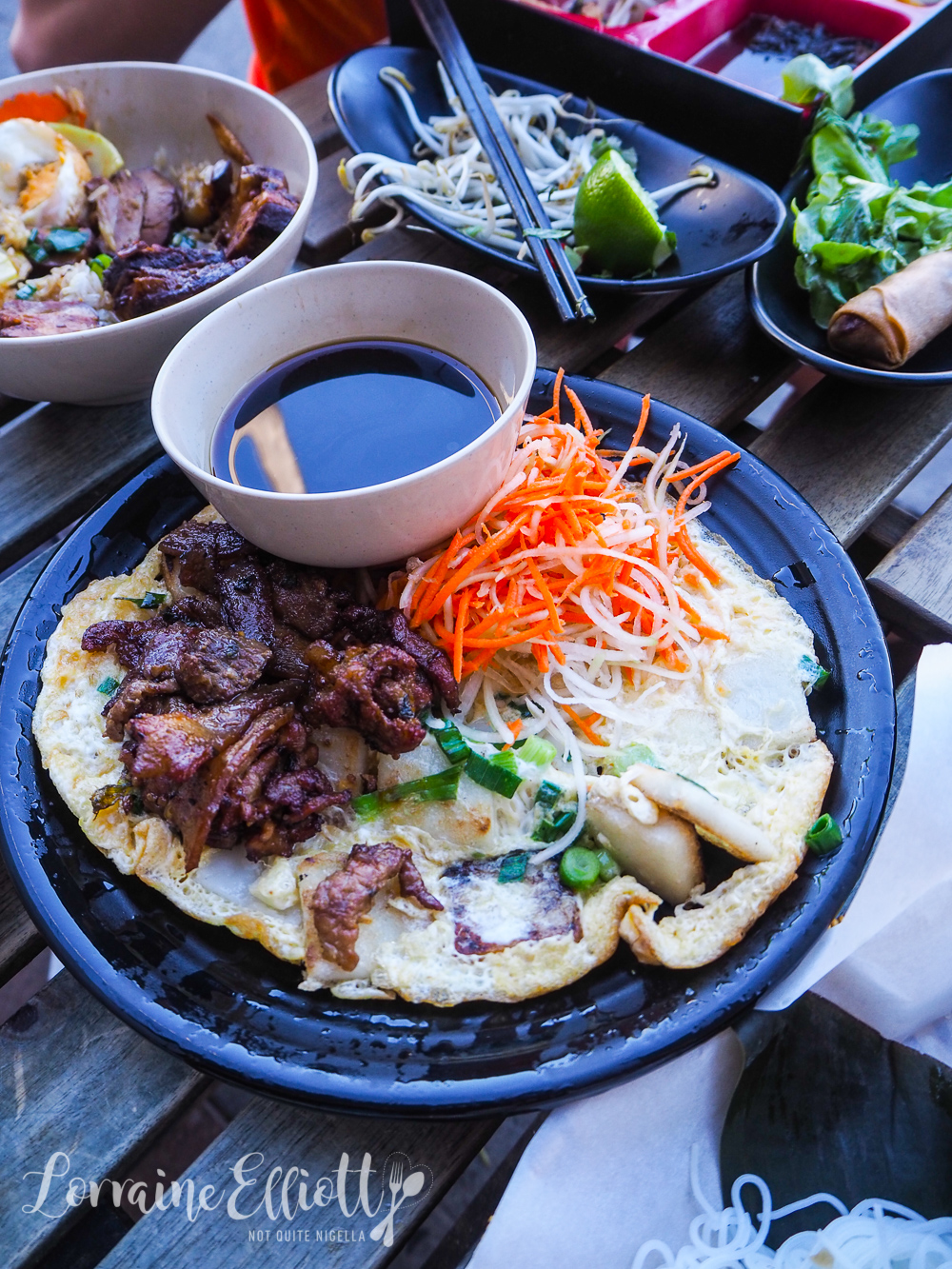 The last dish to arrive is the fried rice cake. It's an omelette with squares of crispy rice cake embedded in it with an umami sauce on top and stir fried sticky pork. Even though we're all full we can't help but eat more of this. The sauce also goes really well with the sticky rice dish.

Something got lost in the ordering process - while I was ordering someone called with a takeaway order and someone else punched in my order so the goat dish that I wanted didn't turn up or get charge and it's probably not a bad thing as we had so, so much food (but leftovers hello!). 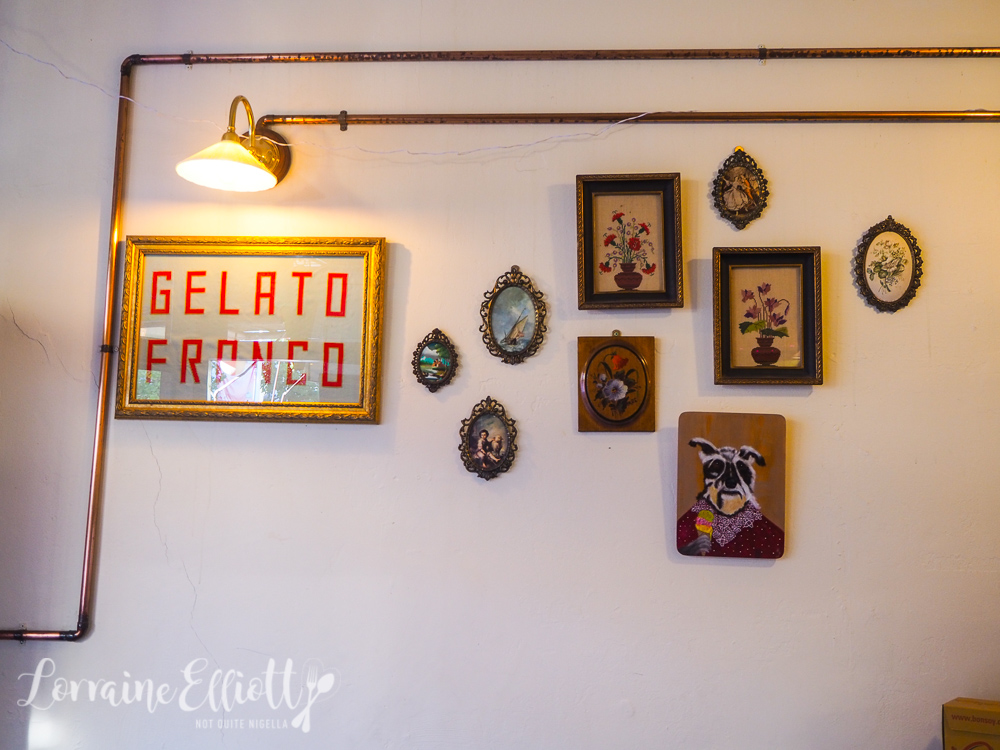 For dessert we walk a few minutes away to Gelato Franco for some scoops of gelato. Standing in front of the display it's a hard decision and we decide on a panna cotta, tiramisu gelato in one cup and then a passionfruit and a raspberry yogurt in another. As a bit of a froyo freak I adore the raspberry yogurt and the jammy raspberries against the tartish smooth frozen yogurt. 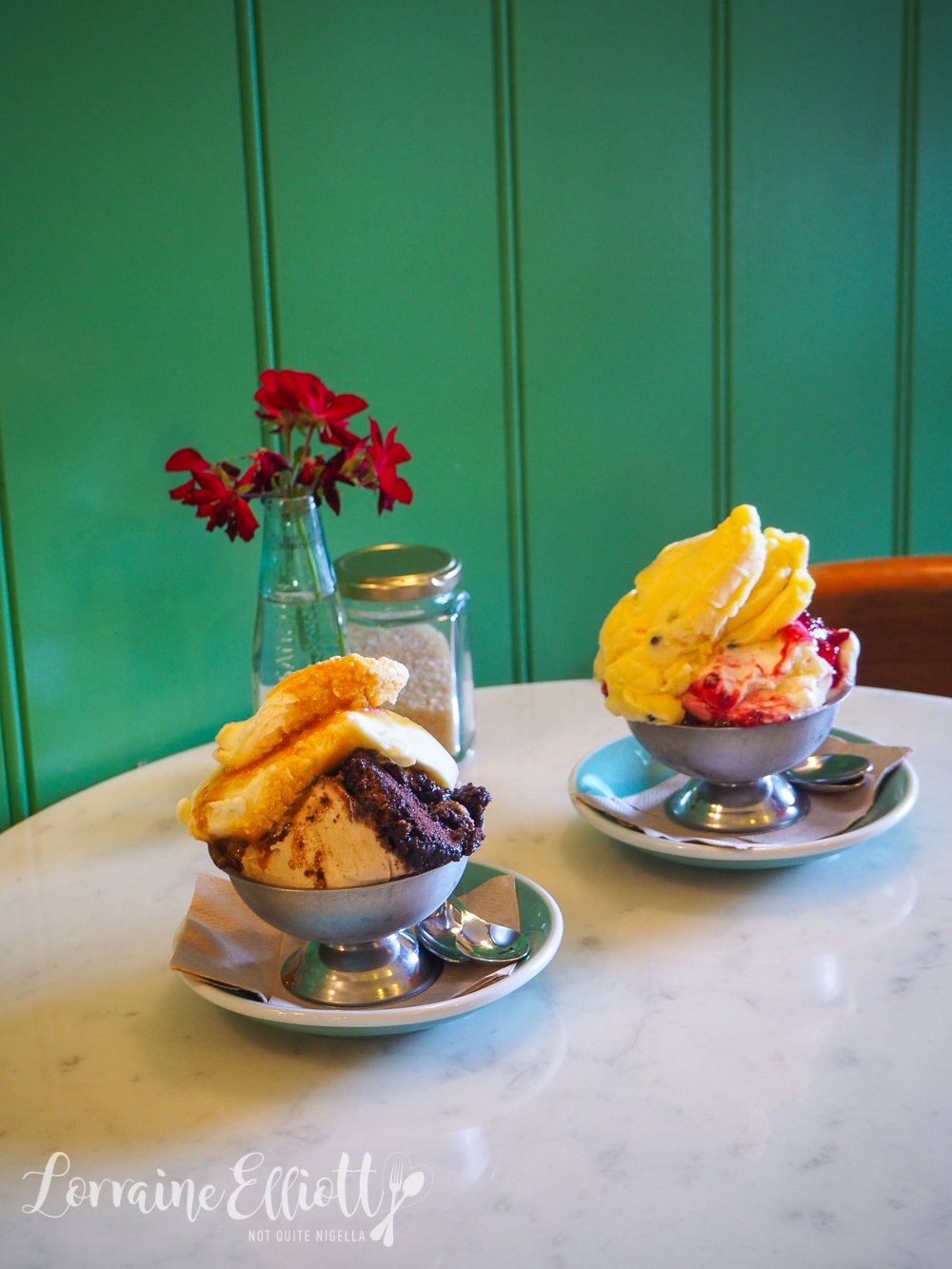 So tell me Dear Reader, have you ever come across friends while eating out? Do you end up eating together? How many dishes do you usually order for 2 people? Do you ever order more to get leftovers?