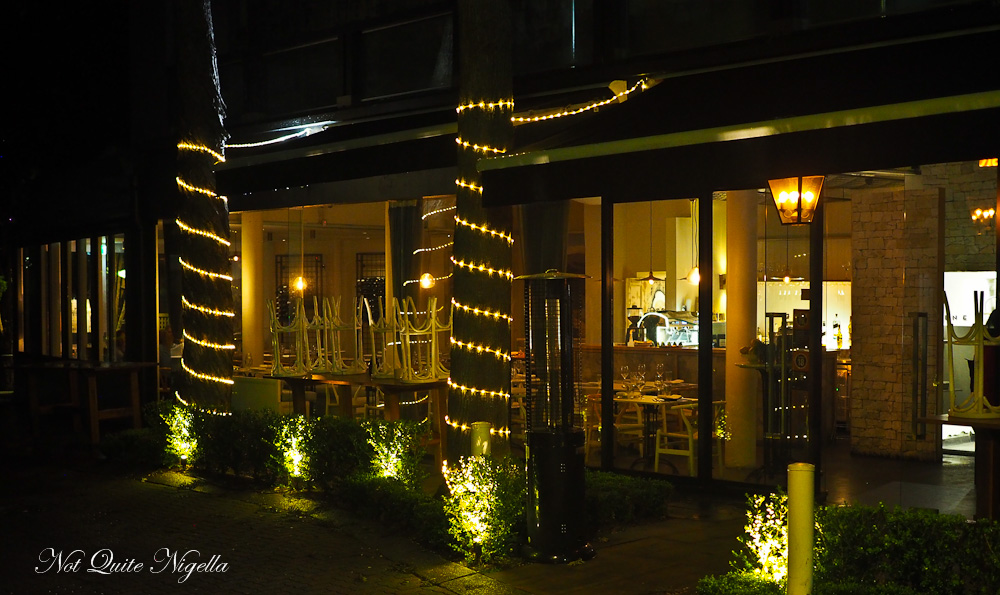 Vine restaurant tucked away on a lane off Short Street in Double Bay serves up creative takes on dishes and well executed food. But sometimes your visit can coincide with a celebration and then things become a little crazy...

I had been to Vine in Double Bay before for a product launch quite a while ago. It was a breakfast and the food was so good I wanted to go back based on the Croque Monsieur alone. But Vine only opens for dinner unless it is an event so I suggested it for Miss America's birthday and he wanted somewhere for his friends that don't travel out of the Eastern Suburbs. Except they weren't there. Never mind. It was just our band of four misfits: Miss America, Queen Viv, Mr NQN and I. 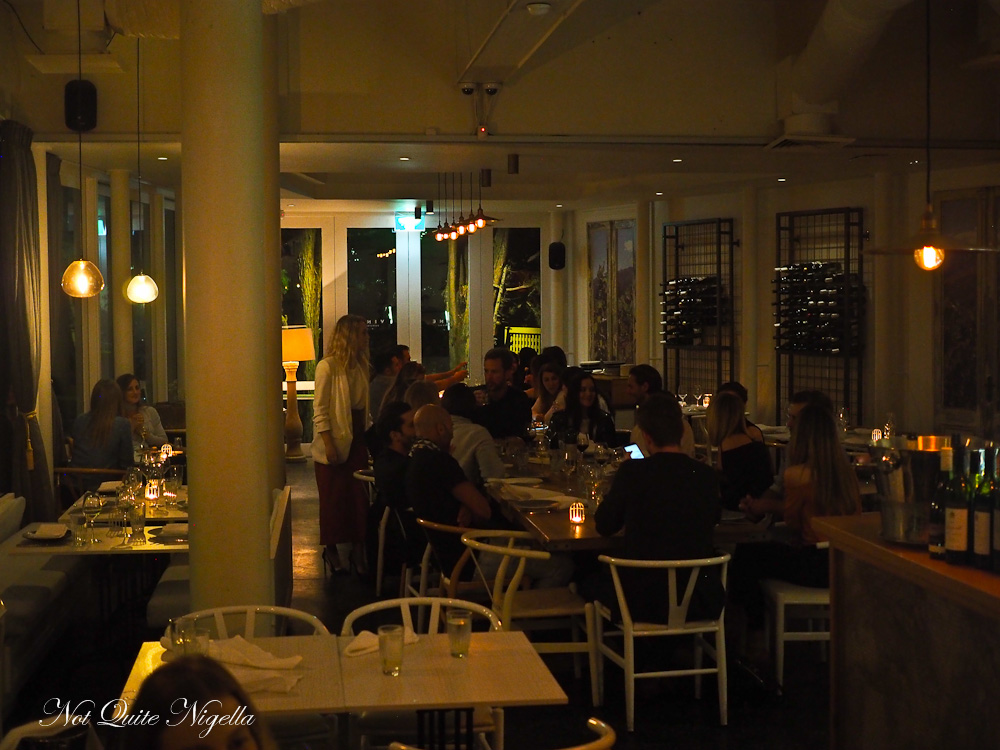 Vine is described as a French restaurant but is more modern Australian with influences on the menu from all over the world. It's noisy at 8pm and we look over where there's two large group tables in the centre of the restaurant with one yet to be filled. It is so loud that we have to ask to move because we are all feeling headaches coming on and we get tired of lip reading each other.

Service is pleasant enough but with not much knowledge on the menu at all. "I'll find out for you" is a common refrain when we ask about something. Coats are taken for some, while not for others and I've never seen so many staff just standing around staring off into space. There's also a pretty hard sell towards cocktails and alcohol. At the breakfast function (albeit it was a year ago or so) the staff were superb so it jars with my first impression. The chef Drew Bolton formerly of Aria and Quay is in the kitchen. 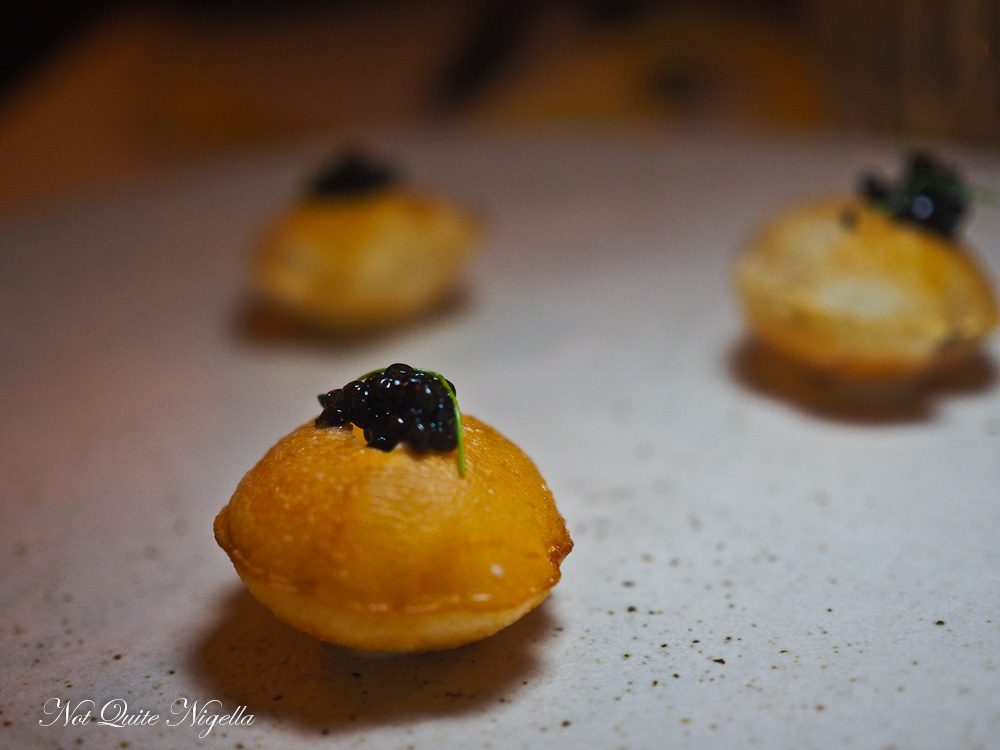 The two snacks come out and there are only three portions because Queen Viv for some reason had decided not to share and wanted do her own thing. The pommes souffle are thin shells of potato filled with smooth fromage blanc and topped with oscietra caviar. They're fabulously light and savoury and I wish we had a whole plate of these. 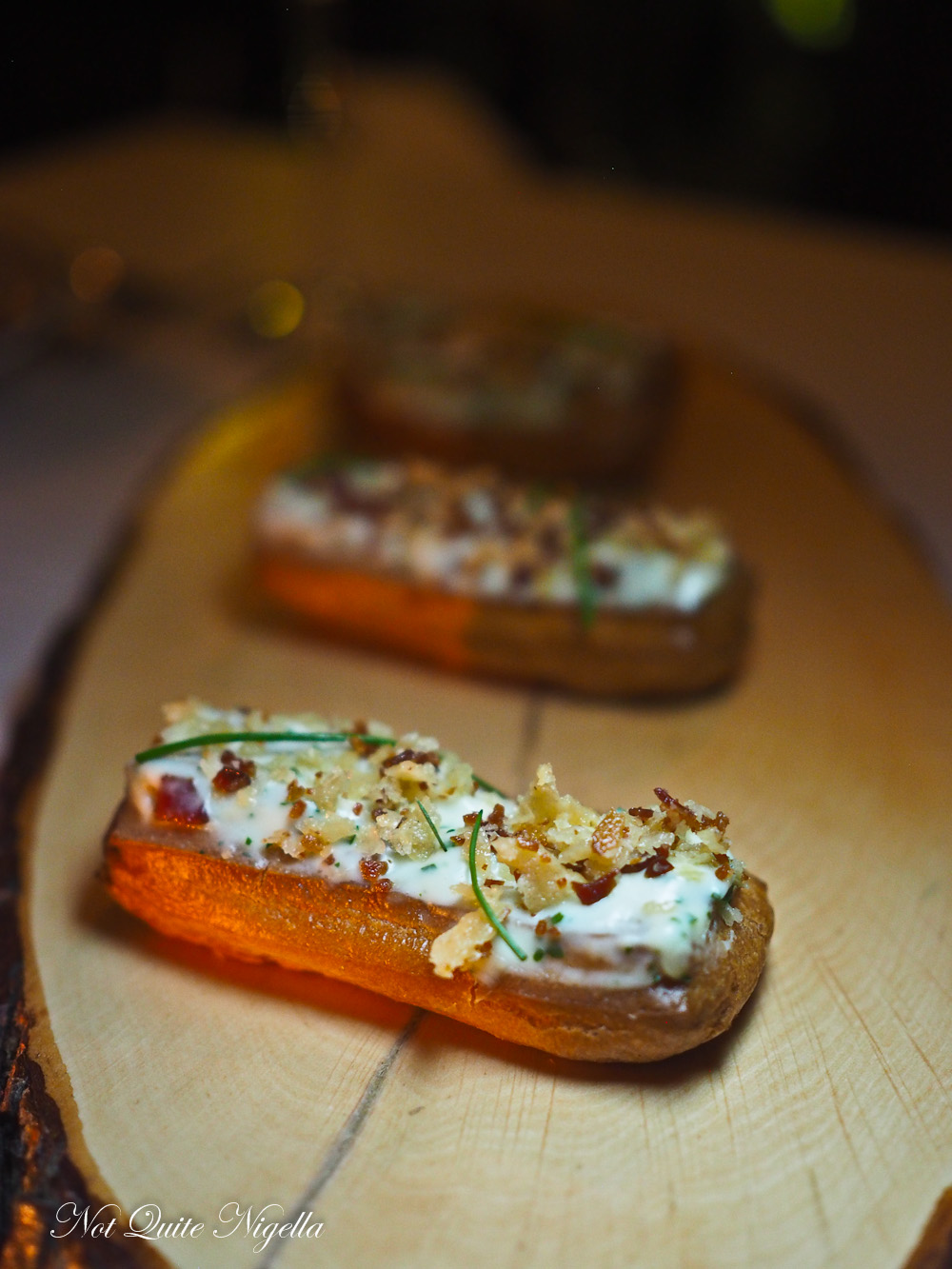 My favourite snack however is the eclair. They are served warm with creamy Manchego cheese cream inside and smoked ham the molten filling threatens to spill out so you just have to eat this morsel quickly-that's no hardship. 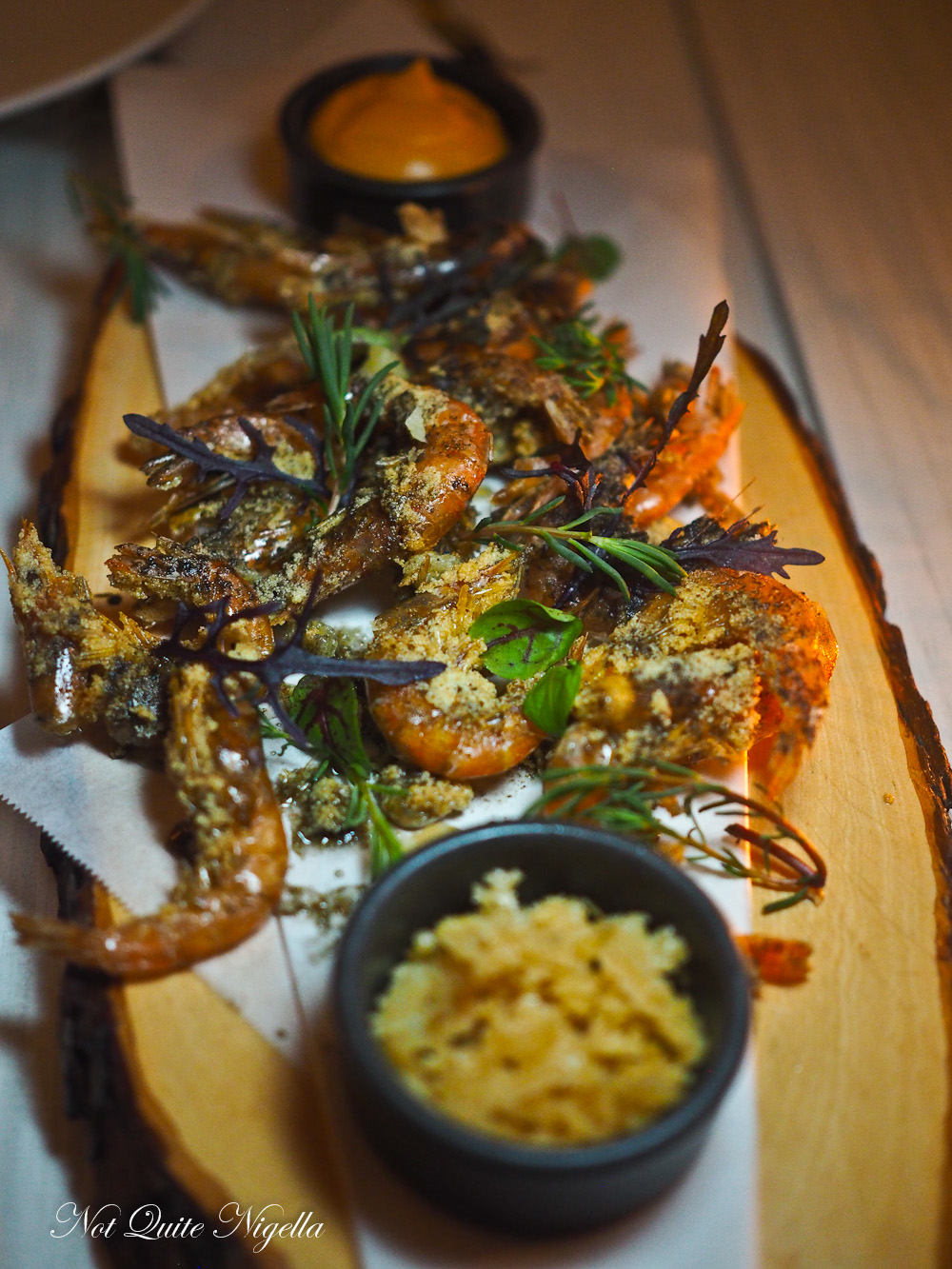 The school prawns are a great drinking snack. They're small prawns that are eaten whole and the burnt corn and crunchy parmesan give this an excellent texture along with the spicy chipotle mayonnaise on the side. 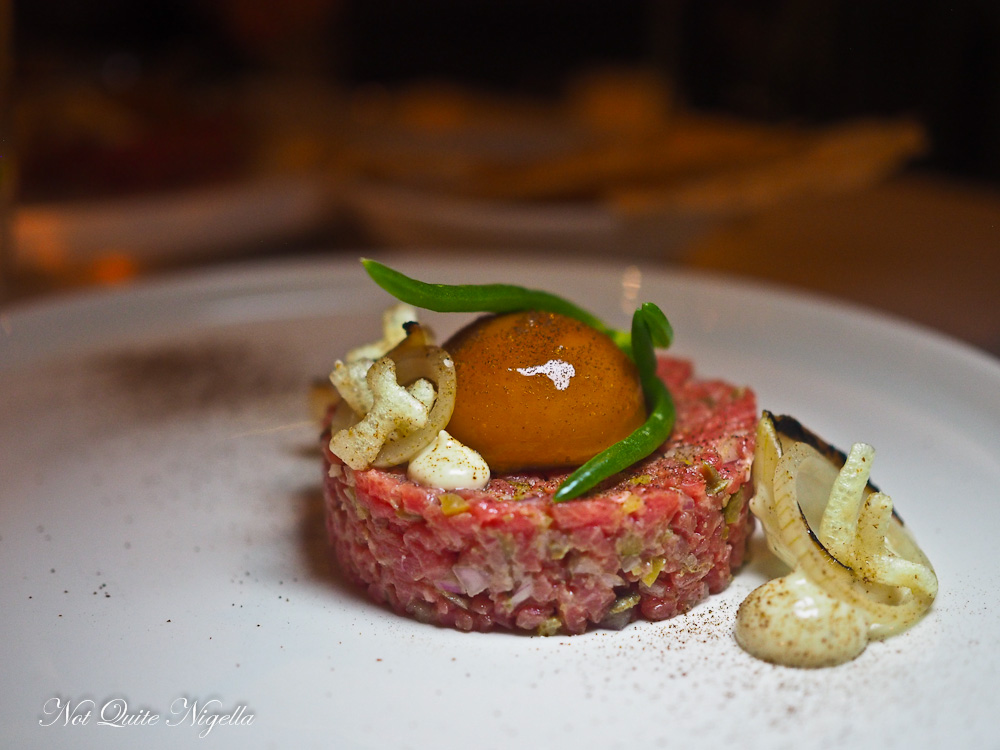 The beef tartare is a soy and mirin cured yolk served atop chopped raw beef with bagna cauda and onion and comes with a small bowl of crispbreads. It's not bad but I do prefer the other dishes a bit more as there's not enough onion or spiciness to this version. 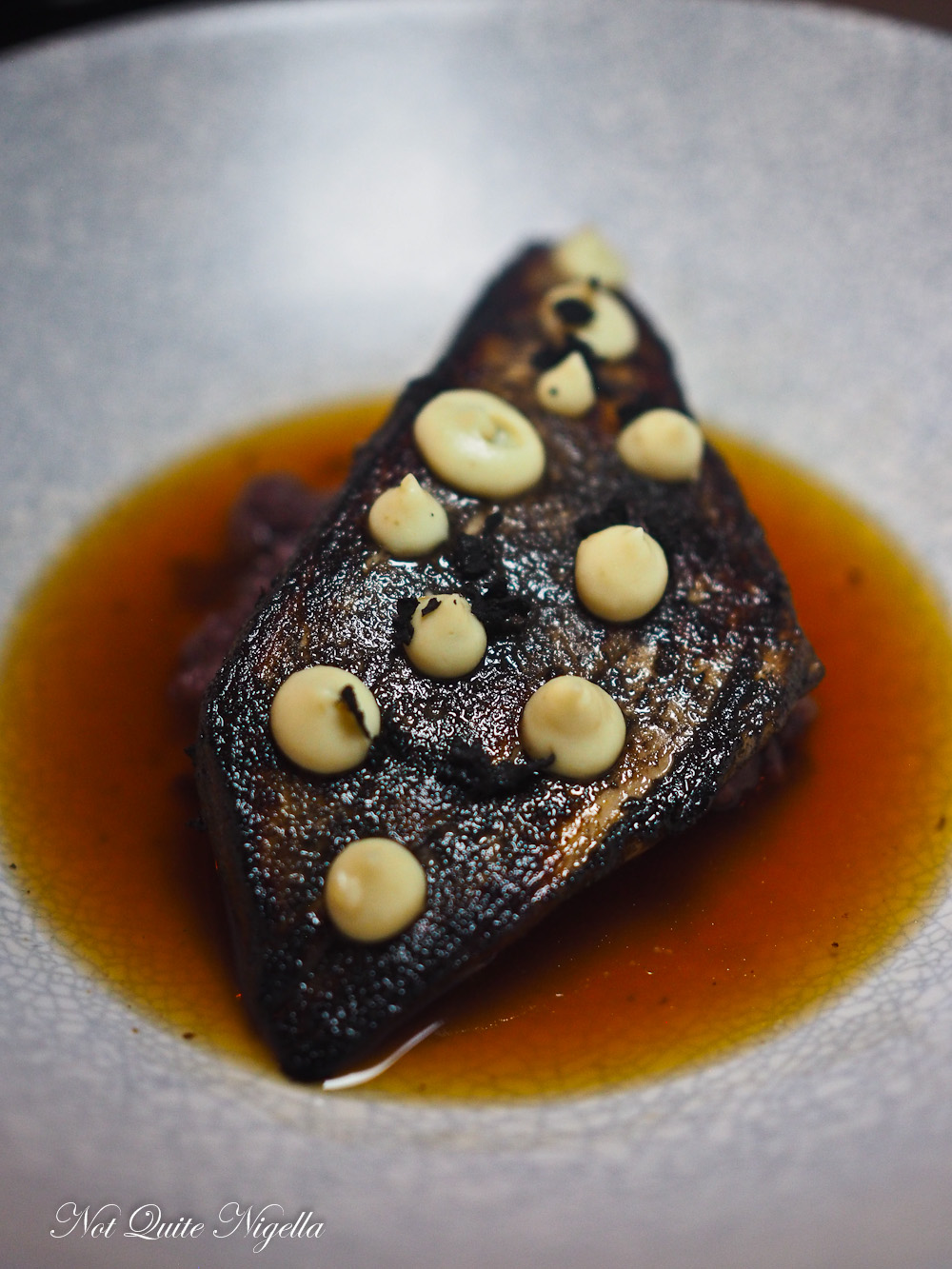 The menu while having familiar ingredients treats them creatively and the blackened kingfish is cooked perfectly and served with celeriac, yuzu kosho and an intense squid congee which is more like a risotto with a bit of soup. I really enjoy this dish and the unusual treatment given to this fish. 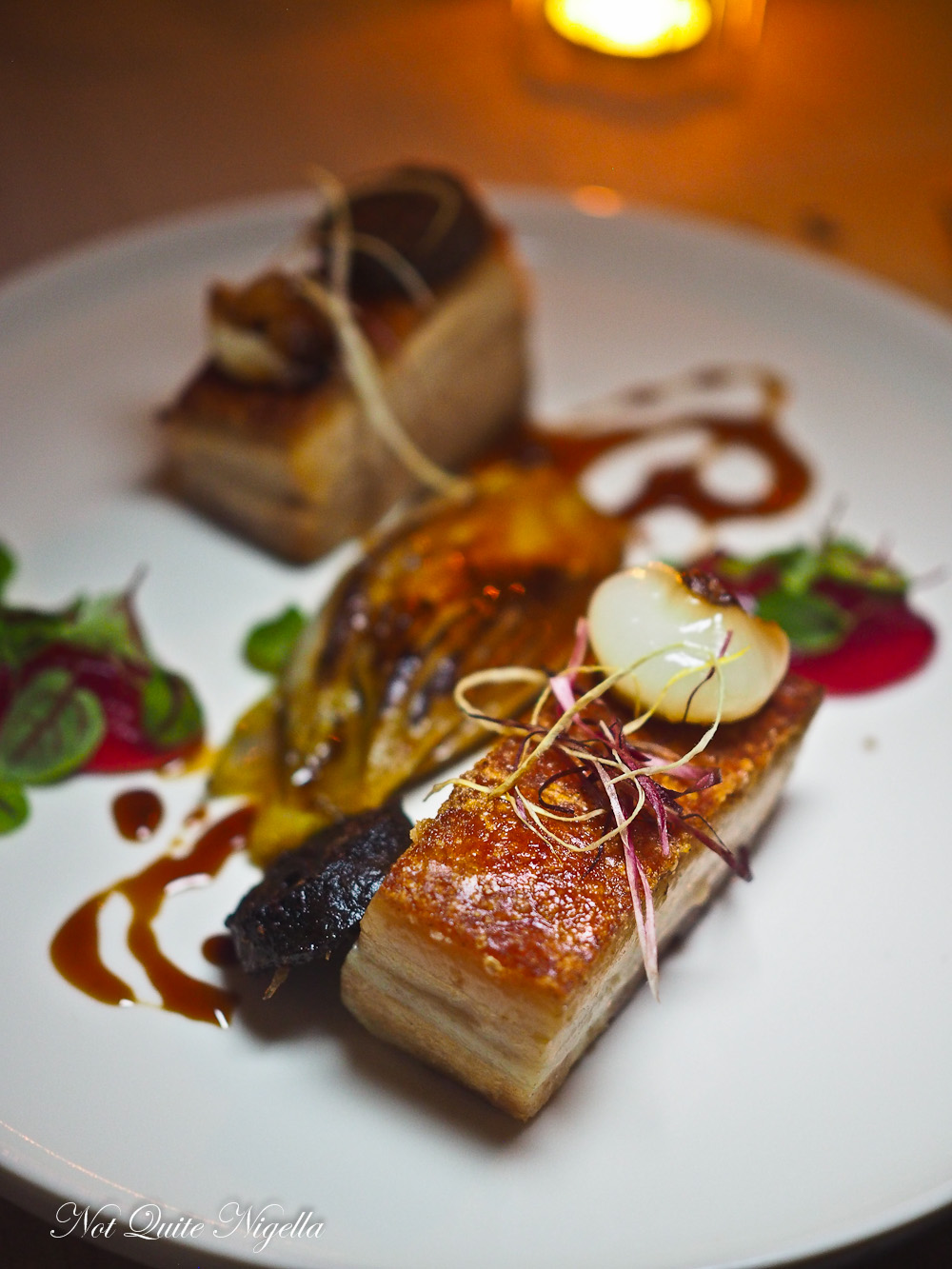 Queen Viv is pre-detox so she was just eating meat tonight (this and the beef tartare are her picks). She gives me a taste of the confit pork and it is glorious. Soft melting meat and crisp crackling. I sort of wish we had ordered it too. 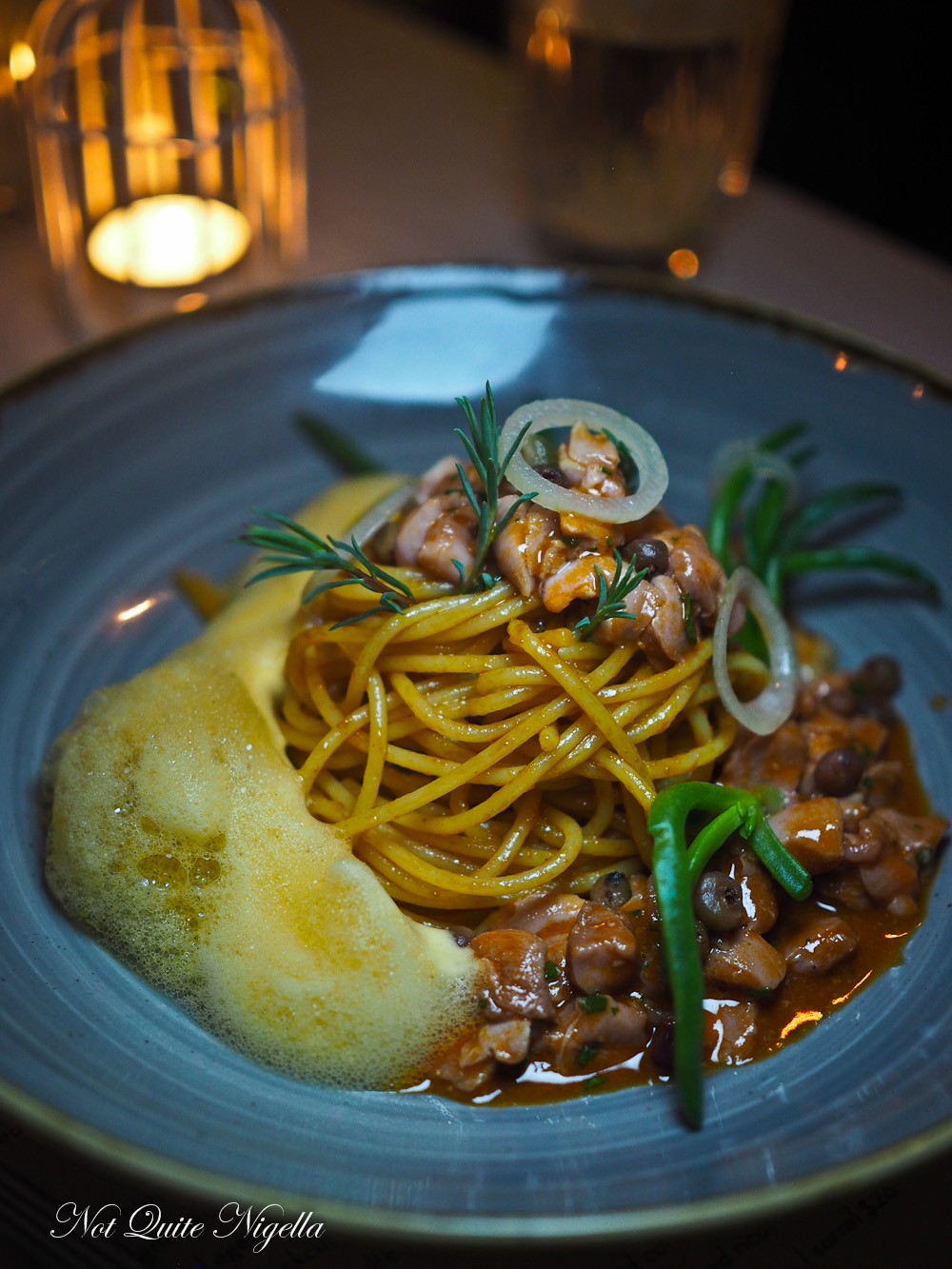 We were curious about the quail a naise. I thought it was a play on mayonnaise given the spelling but it's a play of bolognese, just spelled differently. Instead of minced beef it is small pieces of tender quail, muntries (native berries), soubise in the form of an onion foam and parmesan with a thick tomato based sauce. 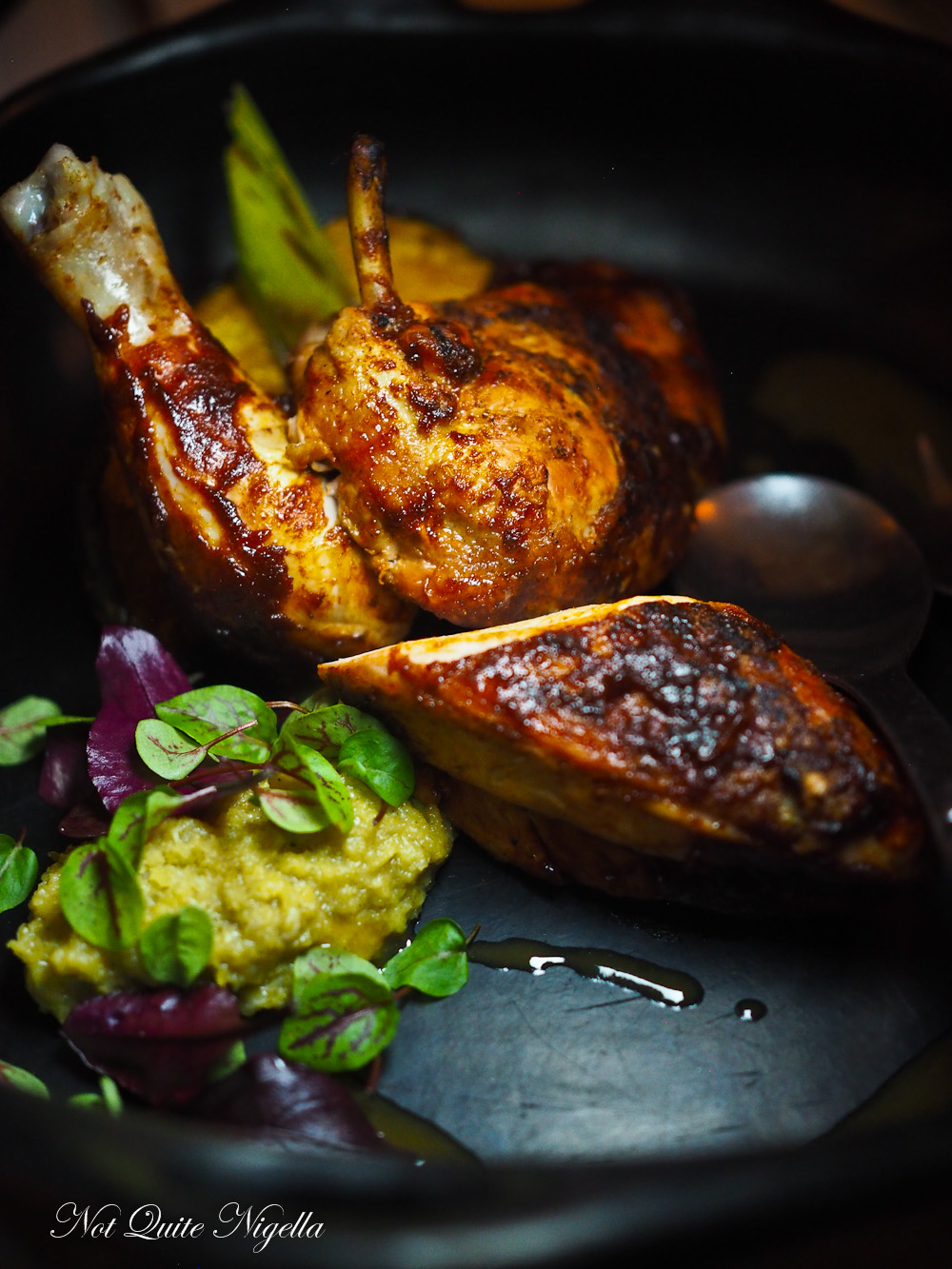 Chook cooked in the Webber $28

Although this is plainly described as a "chook cooked in a Webber" it ends up being one of our favourites for the hot spice rub on the outside of the chicken. It is served with a halved leek and a roasted pumpkin wedge. 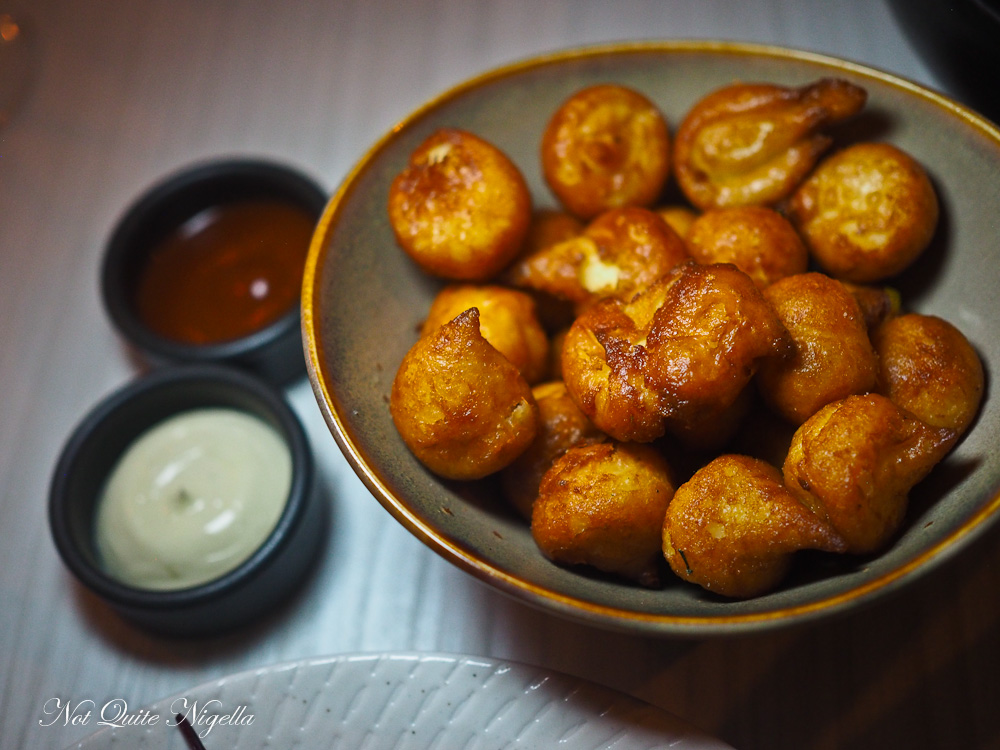 If you're looking for something deliciously potatoey these soft mashed potato drops that have been deep fried are golden crispy on the outside but soft on the inside. When Queen Viv tries one her eyes widen with pleasure and then she says, "Oh they're very naughty, very naughty indeed." And a shoutout for the two sauces too. Because sometimes you want aioli and sometimes you want spiced ketchup.

At this point the other large table had filled out and the noise becomes unbearable. It's not just us, we can see the pained expressions on the smaller tables around us as the squint and crane their necks to look at the large table. Perhaps we were out of luck that night with the large table and hopefully it isn't always this noisy but this was definitely one of the noisiest dinners I've experienced. We ask to move to the bar, a sanctuary from the din. 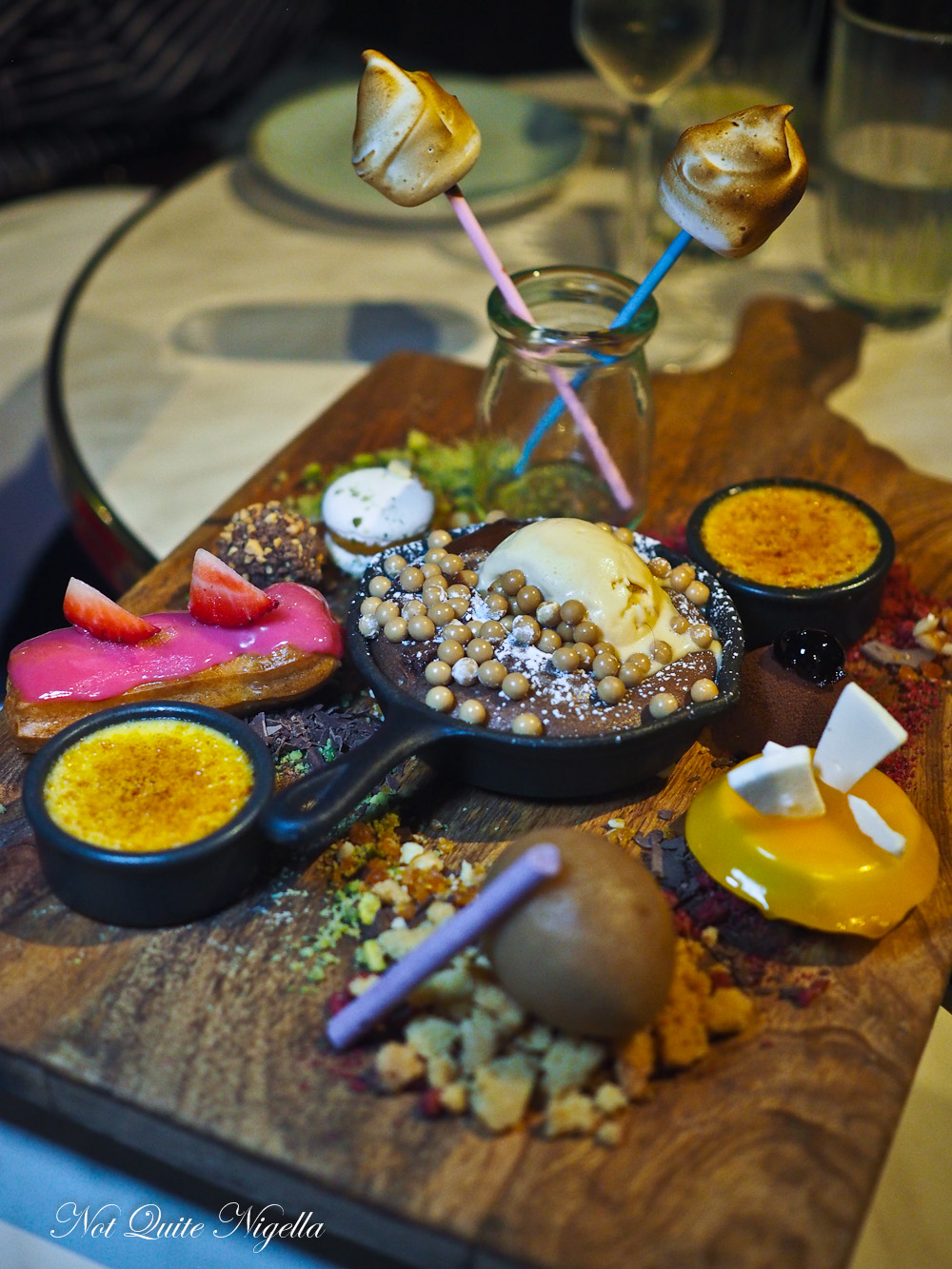 The dessert is a mix of all of their desserts but an abridged version with some petit fours thrown in. There's two small creme brulees, a mango and passionfruit cheesecake with coconut and a Valrhona souffle with a liquid smoked chocolate fudge centre, small chocolate puffs and a nitro vanilla ice cream. There are also salted caramel ice cream balls coated in chocolate and then marshmallow as well as an eclair, macaron, root beer sorbet on biscuit crumbs and a truffle. It's comprehensive and I like the chocolate souffle the best although it isn't perhaps quite as finessed as the other dishes. 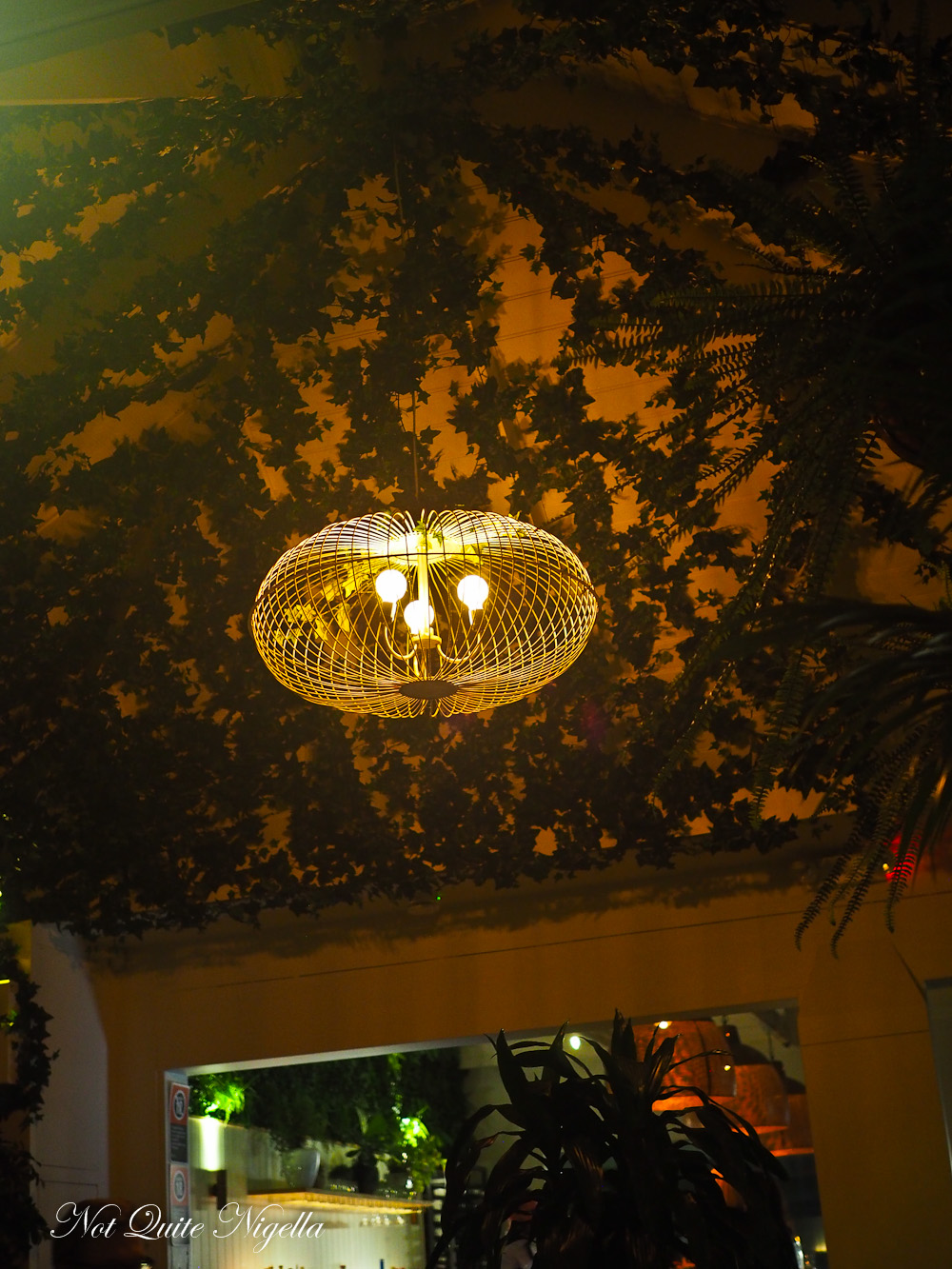 Perhaps we hadn't tipped enough (Queen Viv was extremely unimpressed with the service and didn't want to tip at all) but our waitress turns churlish at the end. I can only attribute her change from pleasant to surly to the rounded up tip (just under $10).

Would I go back? For the food a resolute yes but for the service and atmosphere, I'm afraid that it was just too loud for me...