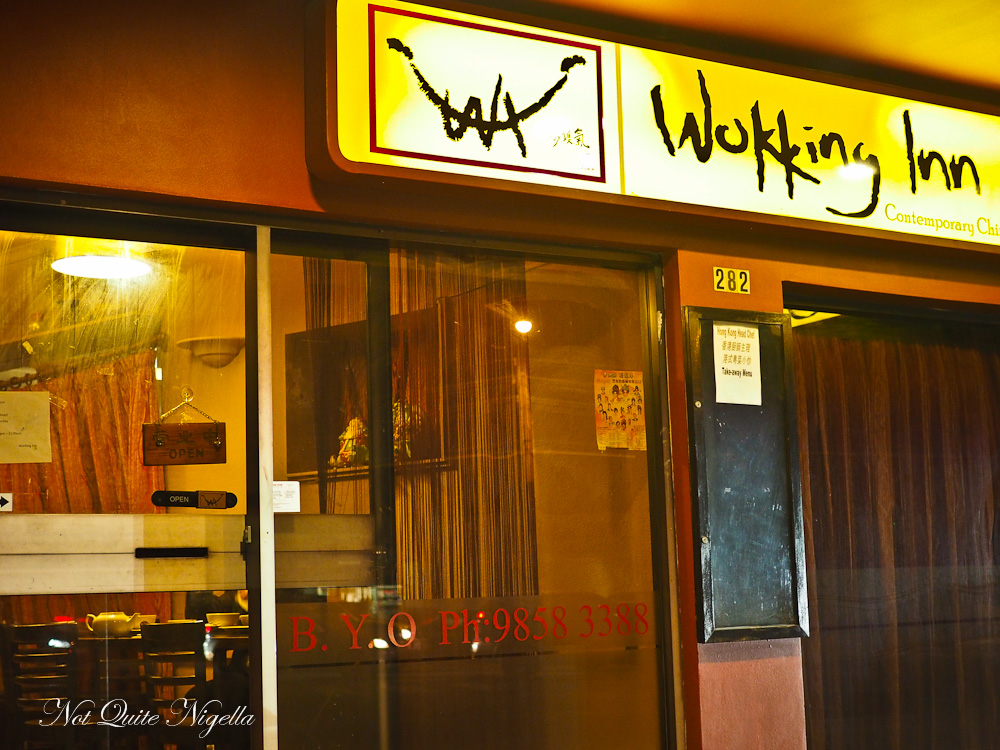 Want a Chinese restaurant with its own distinct personality? Wokking Inn in Eastwood delivers the goods with charm and a very interesting menu system and menu. You can order from a menu of the classics but there's also the other menu that hold the real treasures...

"I'm sticking to a Mediterranean diet," my father announces dramatically over dinner.

My mother looks at him as if he had morphed forms in front of her own eyes. "That's news to me," she says. Unfortunately for my father we aren't in an Italian or French restaurant but a Chinese one. "China is pretty far from the Mediterranean," Mr NQN points out. 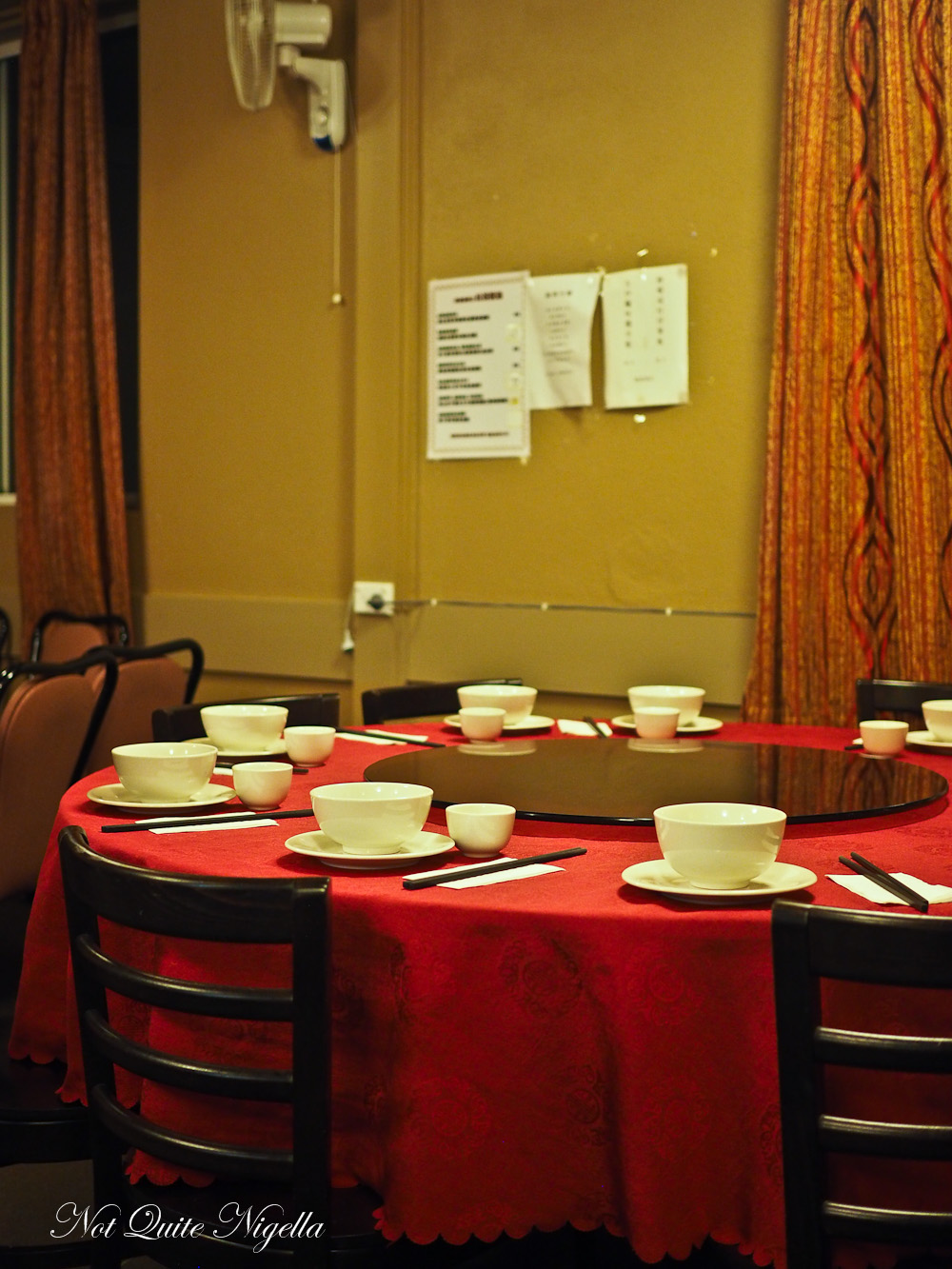 A few minutes earlier we had walked into Wokking Inn on North Road in Eastwood. The ground floor room was empty of people except one woman sitting by herself who had her arms protectively around her dishes as if someone might want to pinch them. We were directed upstairs to the main dining room. I could tell that my parents were a bit worried and my mother reflexively clutches her handbag tightly ready to leave at any minute. It's dead quiet here (it's just before 6:30pm). There are the Chinese restaurant staple maroon tablecloths and black vinyl covered chairs.

Our waitress is cheery and helpful and gives us two menus to take a look at. There is a regular menu-if you're looking for typical Cantonese classics they're all in there along with a home cooked section for those that want something a bit more comforting and simple. 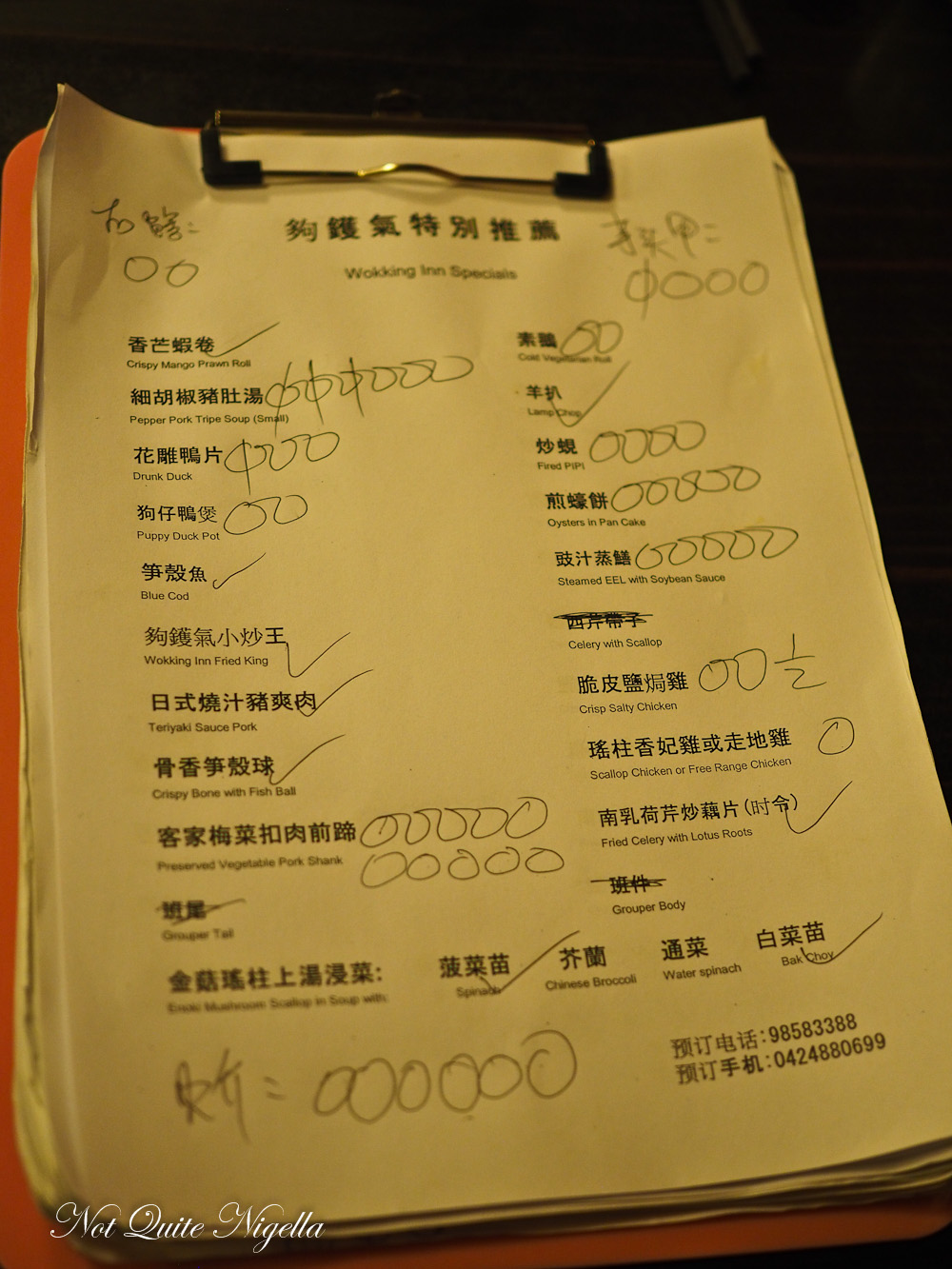 But those in the know ignore this menu and go for the other one. This is a clipboard with pages of paper with items in Chinese and English and some sort of unusual ordering system involving circles, circles with strikethroughs and ticks. The circles represent how many serves of each dish they have and once a serving is ordered the circles get a strikethrough. Oh and there are no prices but they'll happily tell you. Most dishes are massive and around the $35 mark but there are some that are $60+ so it's worth checking. 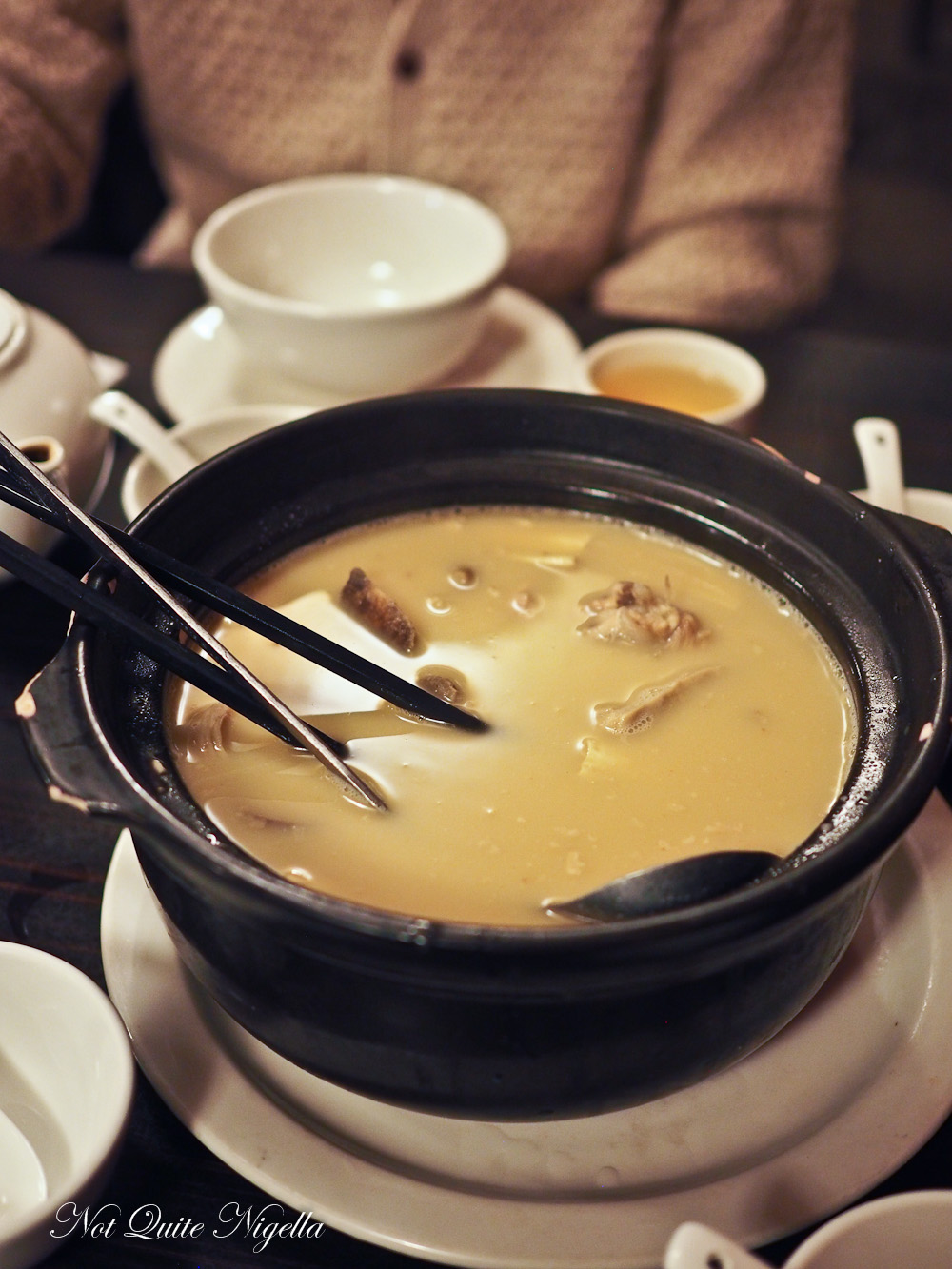 They bring out a massive pot of soup, a broth made rich with white pepper and plenty of pork bones, tripe and chicken legs boiled to impart the marrowy goodness into the soup. This is warming and filling. The menu describes it as small but I'd beg to differ, it was enormous. 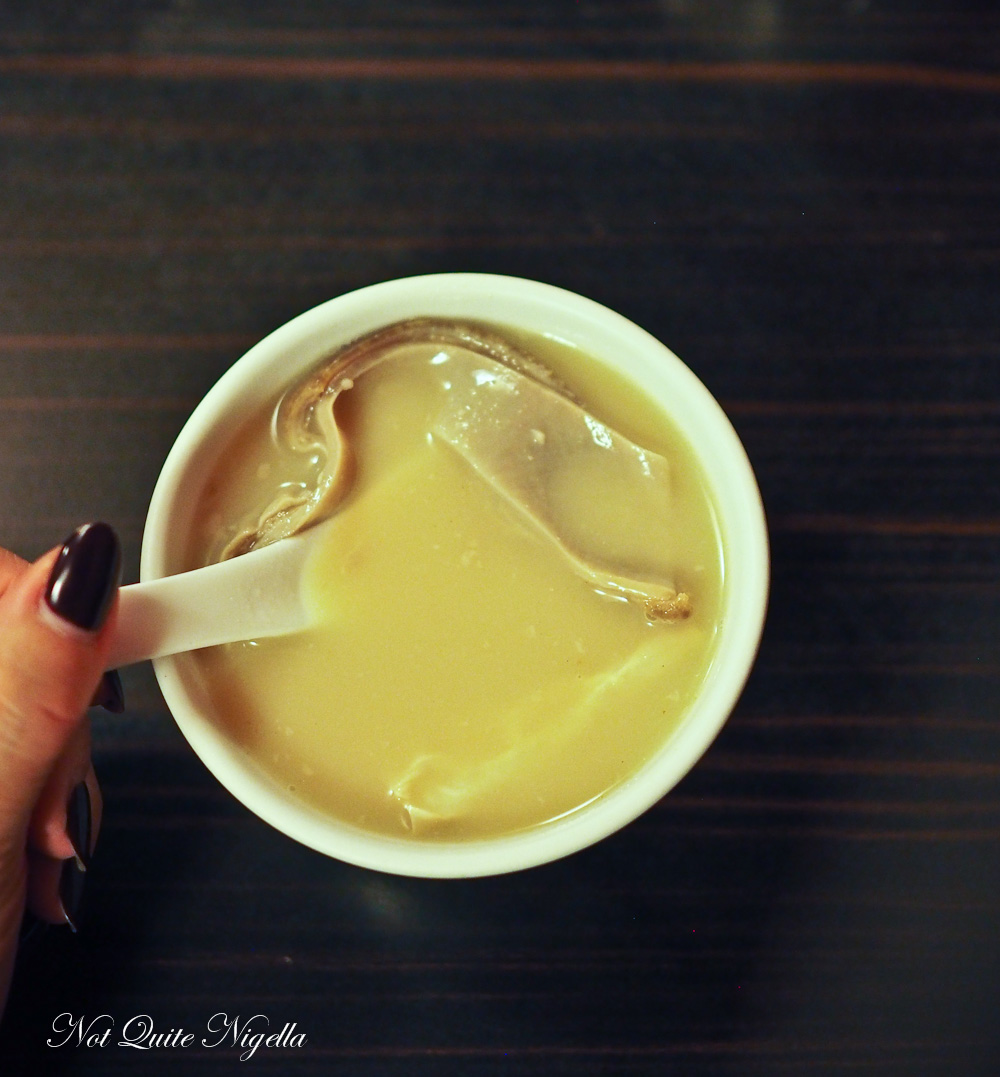 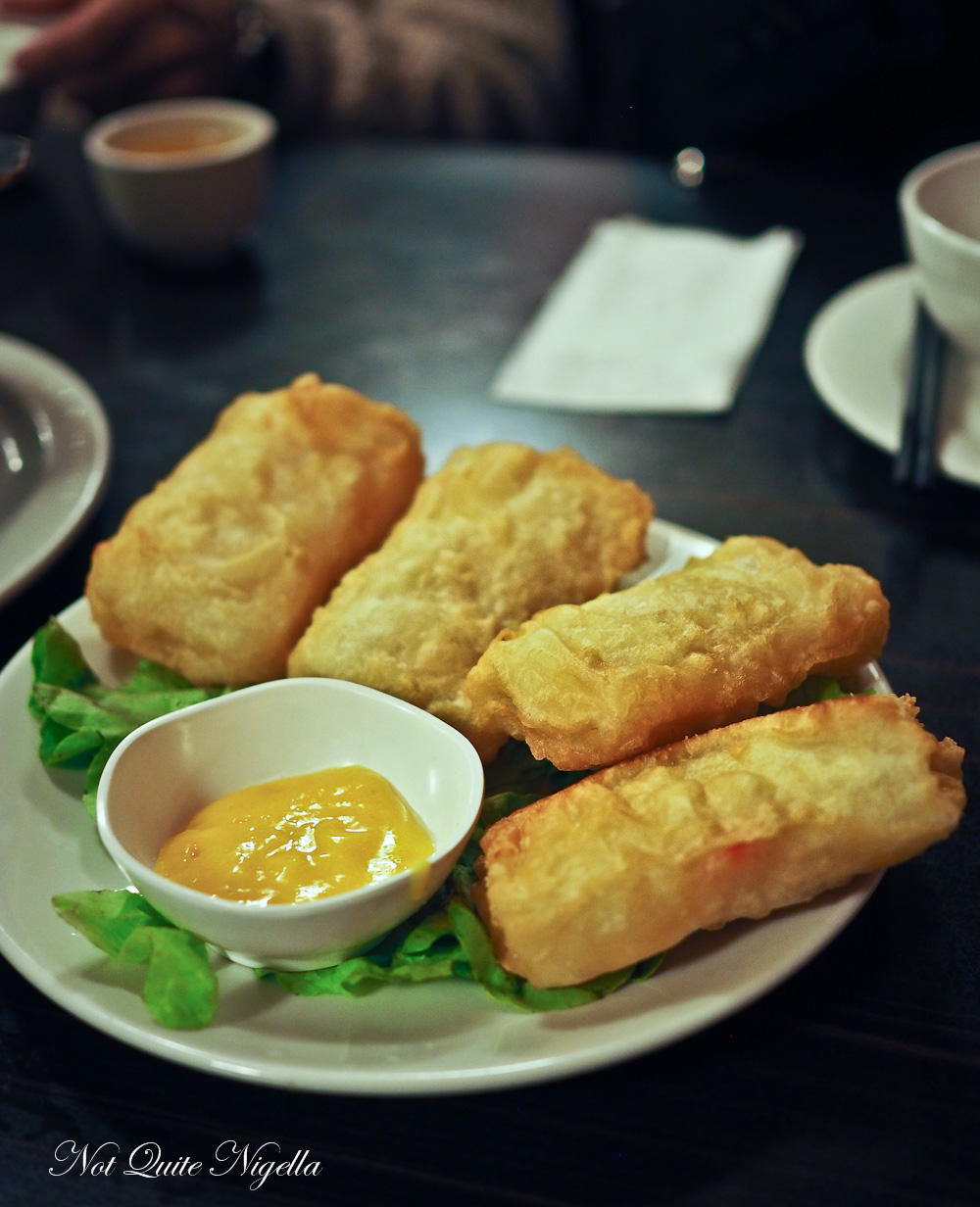 Plates and plates of these huge rolls go past to pretty much every table and by 7:10pm most of the tables are taken. I am going to say that I didn't really love these spring rolls although they're a very generous size. On one side is prawn and on the other side is mango and there's a sweet mango dipping sauce. I think I would have rathered just prawn but clearly they're popular. 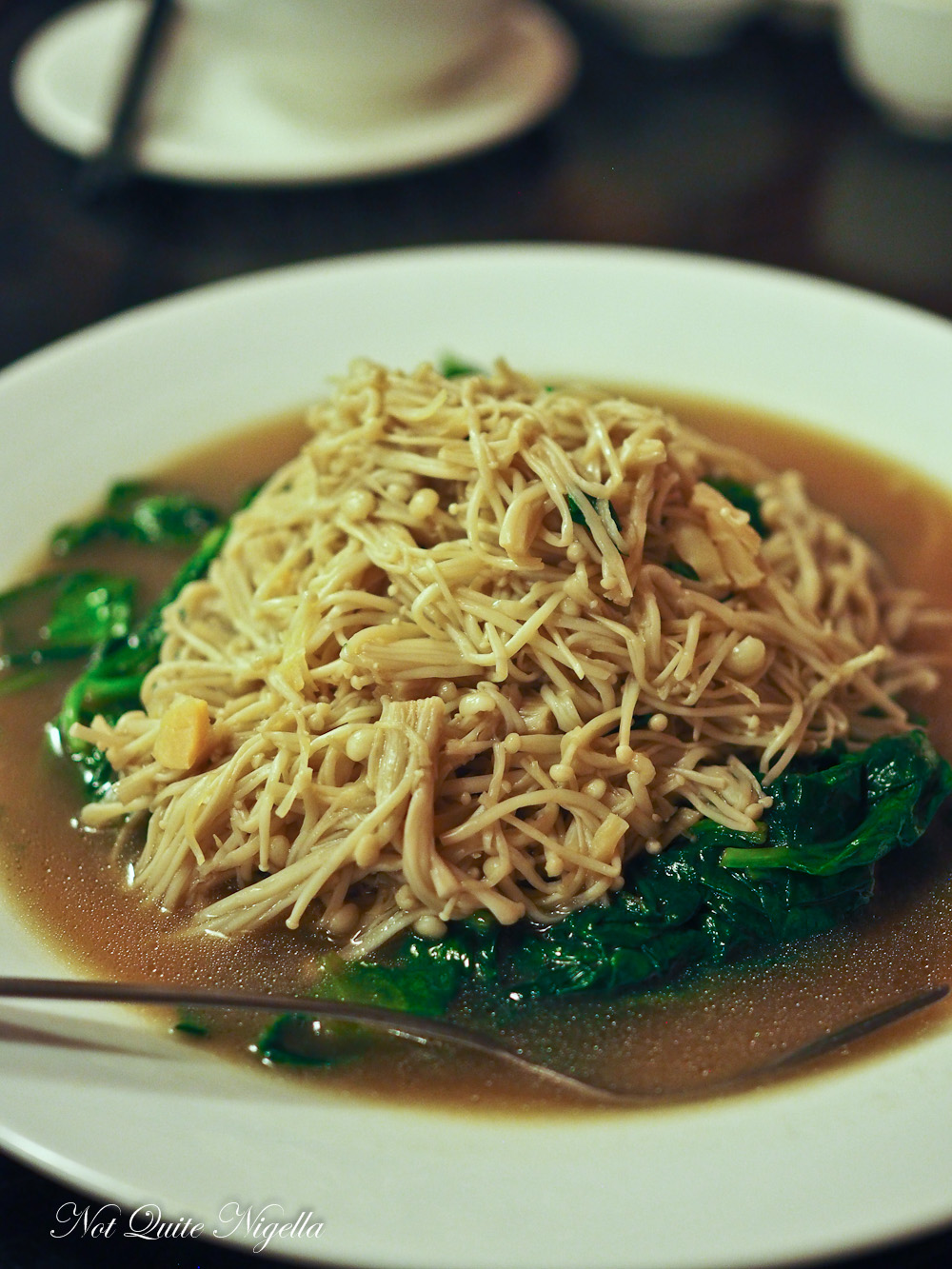 "How much do you think that is?" Mr NQN eyeing the enormous plate of vegetables set down on the table. There's lots of cooked down spinach and a pile high of enoki mushrooms. It's a mild tasting vegetable dish, needing a slight bit of seasoning but if you want healthy vegetables to go with meat, this hits the spot. 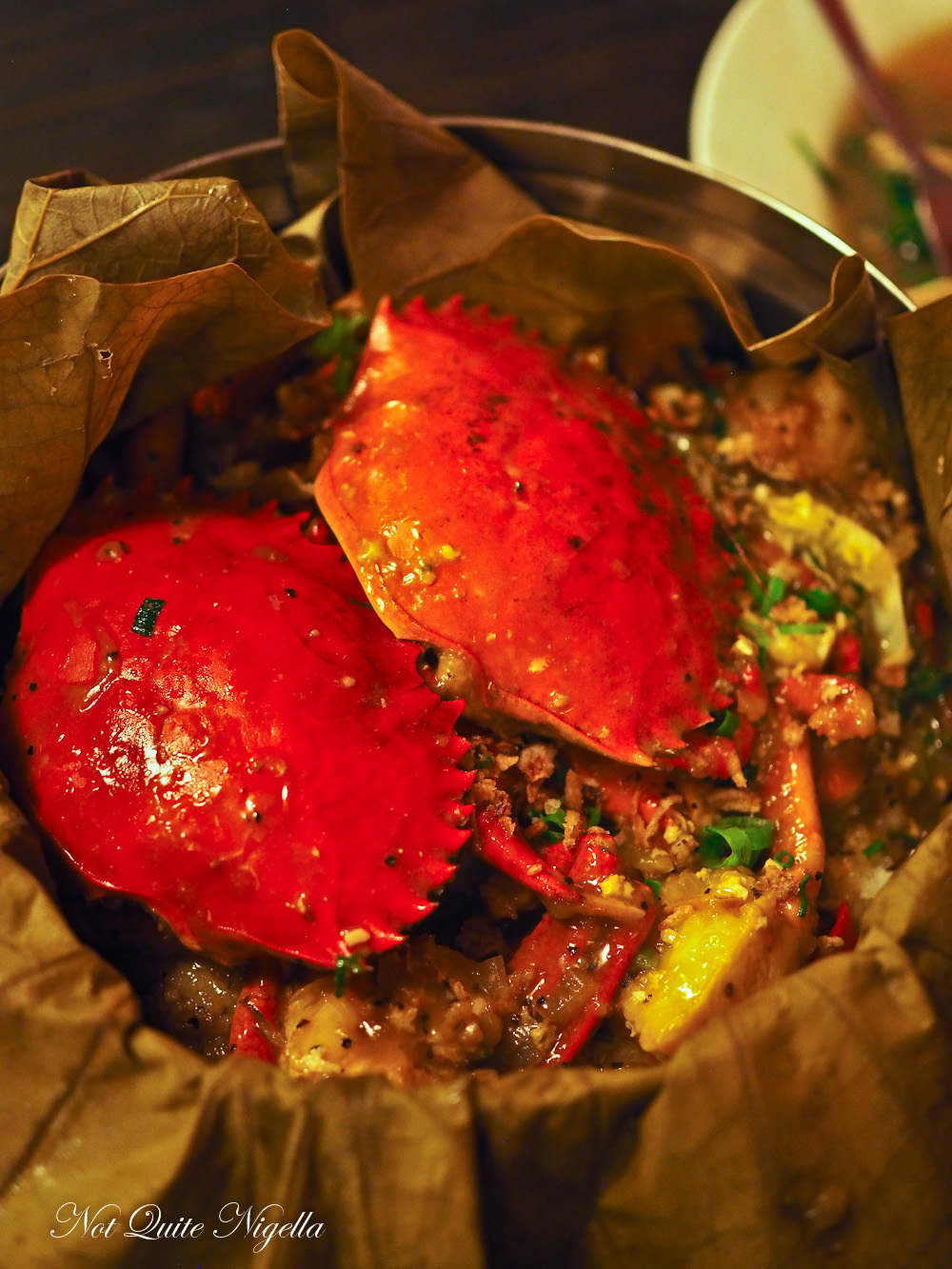 This is the restaurant's signature dish. Two small mud crabs are cooked in a black pepper chilli sauce and served atop a bed of sticky rice. It is all wrapped up in a lotus leaf that you unwrap to reveal the inside. The crab is full of meat and the tender grains of saucy rice catch all of the flavours from the crab, green onions, chilli and shiitake mushrooms. 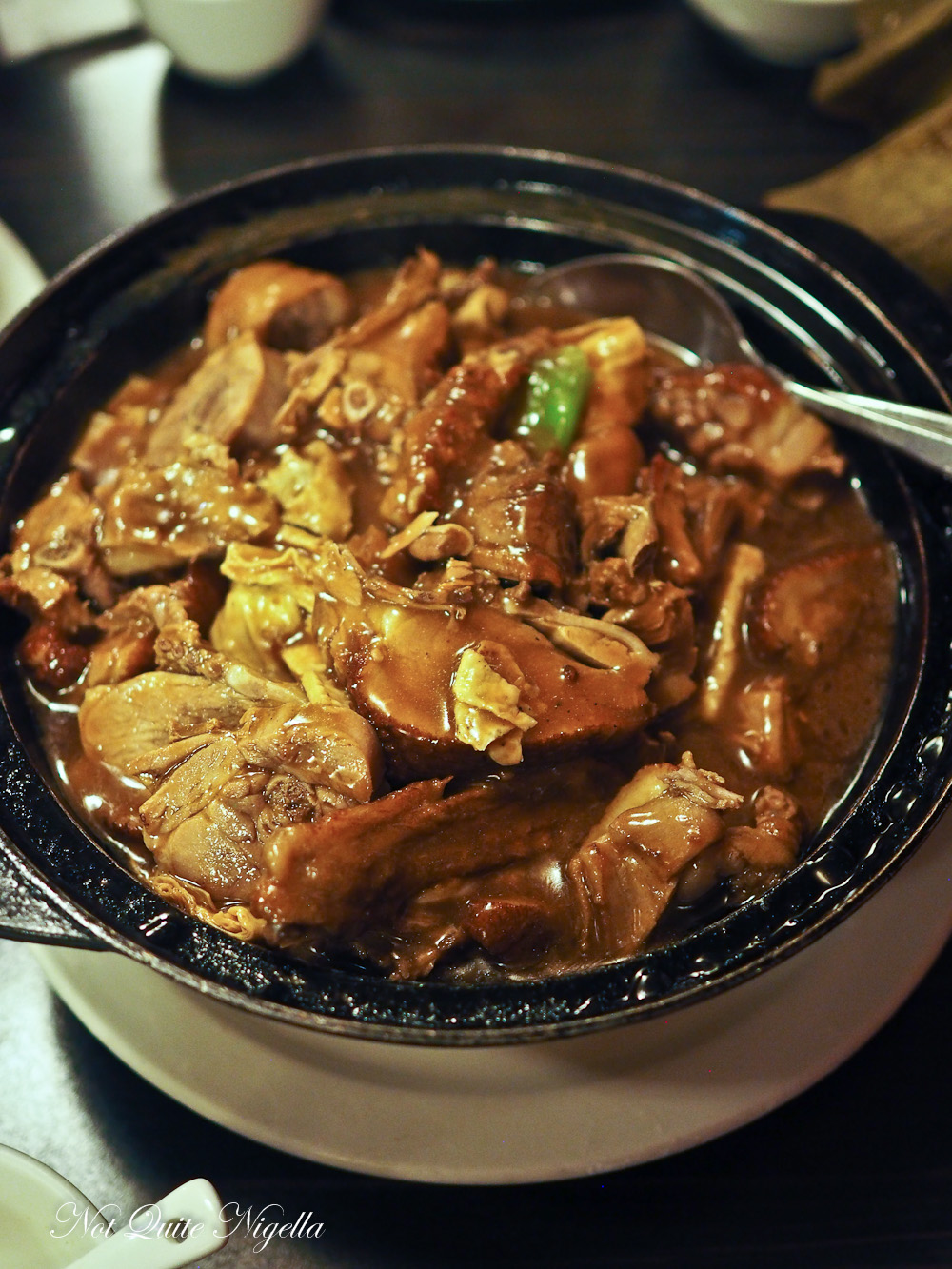 When we first took a look at the menu I had to ask what "Puppy Duck Pot" meant and the waitress giggled in return. She explains that it's not dog but the chef cooks duck the way that they cook dog in China. "But it is illegal here," she points out. I'm never going to knowingly eat dog so I figure I may as well try the flavours here. The duck is served with a rich sauce full of spices with star anise being the predominant one. There's also pieces of pork skin that have been deep fried and then cooked again so that they have a slightly ridged texture and these melt in the mouth. My dad has some of the meat. "This is pork," he says adamantly. I guess pork isn't part of his newfound Mediterranean diet.

I point at the duck wing jutting out from the side of the dish. "Pigs don't have wings, see?" I say.

"How do you expect them to fly?" adds in Mr NQN. Not helping at all because my dad is back to thinking that it's pork. My mother guffaws into her teacup while my father examines each piece carefully. 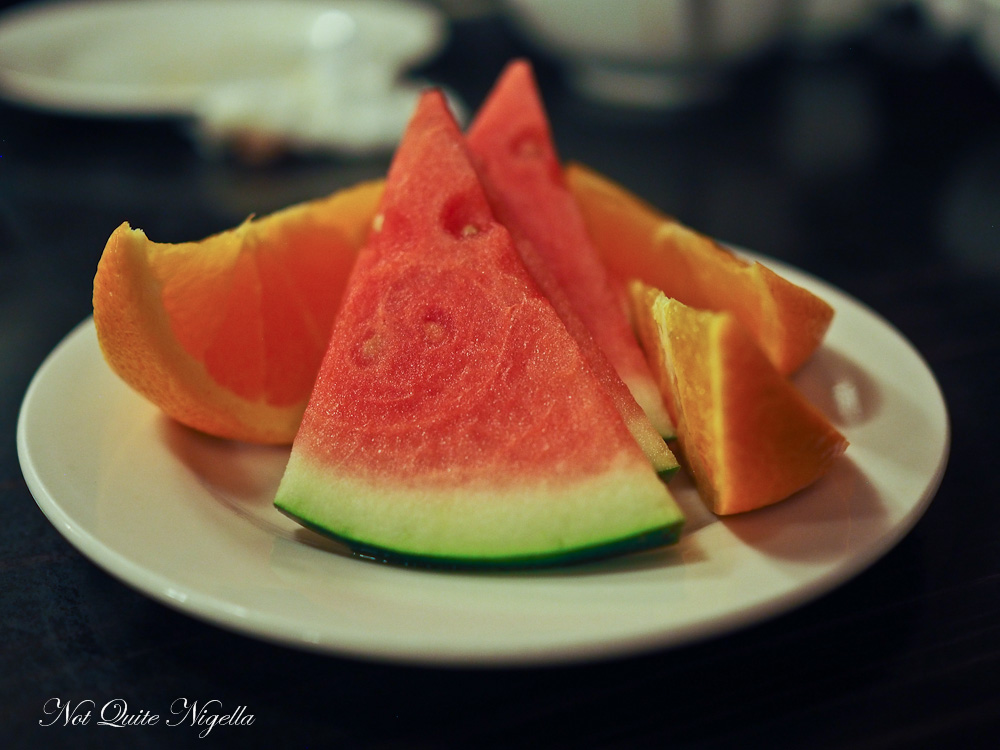 There's no dessert-it's a plate of watermelon and orange and that's more than fine with us. There is so much left over and they pack up everything for us including the soup and when they bring it out they kindly let us know to be careful driving it home because the soup may spill. "Not bad," my not-often-to-praise mother says nodding with approval.

So tell me Dear Reader, what did you think of the menu here? Have you ever eaten dog or would you? And are you seldom to praise or are you quick to compliment?