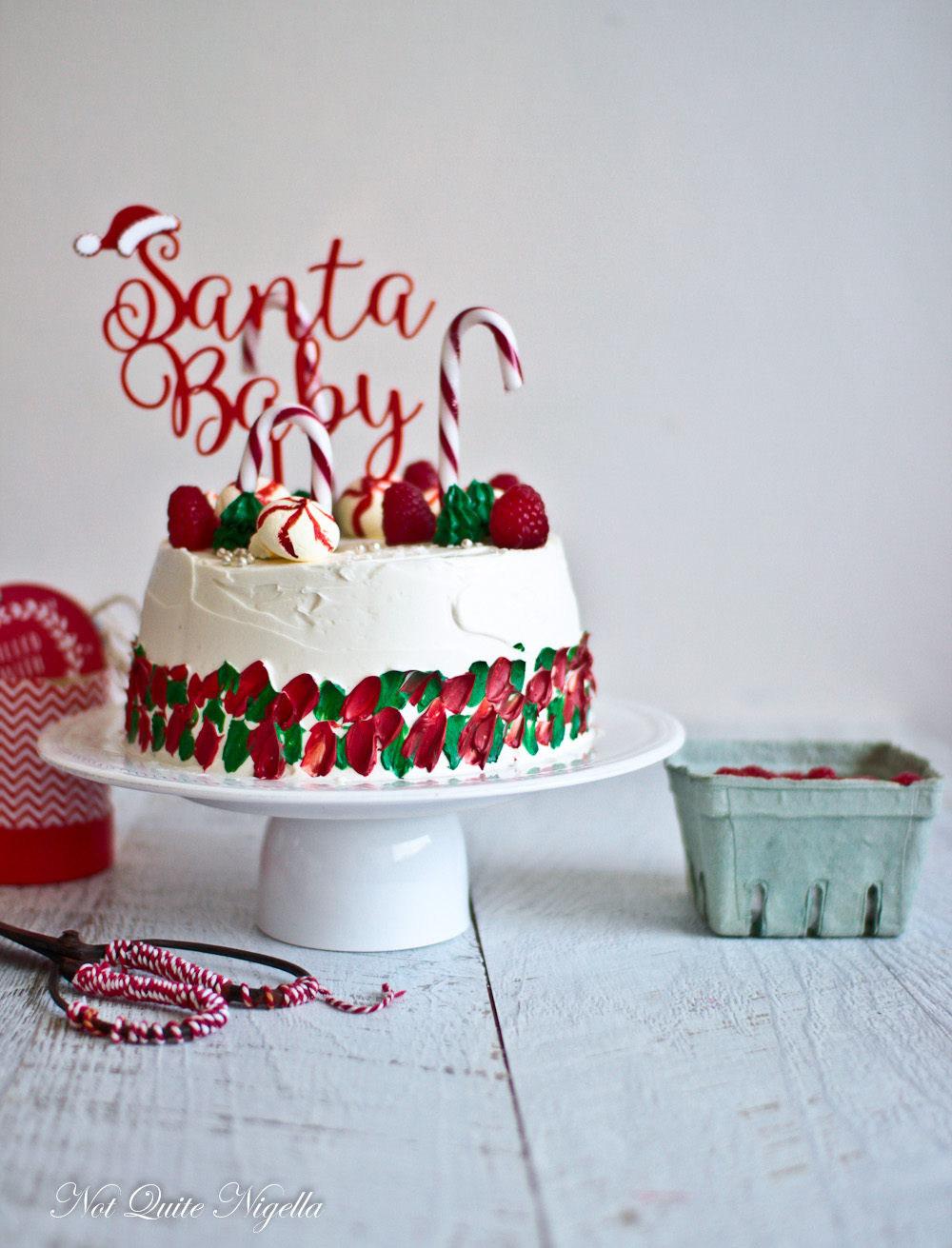 If you're want to serve an angelic, light cake centrepiece for Christmas then this Angel Food Cake fits the bill perfectly. The main ingredient and the chief raising agent in an angel food cake is egg whites and the cake itself has little to no fat in it. It's simply the most gorgeous, ethereally light cake you could make!

Of course you could leave it as it is but you know me right? Nothing can ever be totally healthy especially at Christmas and so I covered this with a buttercream mixture with a creative dabbing technique and then decorated it with assorted candy canes, snowballs, and other edible trinkets.

We celebrate our main Christmas meal on Christmas Eve. It's not a cultural tradition, it's something that my family celebrated because when we were kids, we didn't want to wait an extra day for a special dinner! So today I will be busy making lots of food for my guests. Luckily I have dessert sorted with this little number (and bonus points, this doesn't need refrigeration, fridge space being a valuable asset at this time of the year). But if you want to use whipped cream then you can also do that (but the cake will need refrigeration). 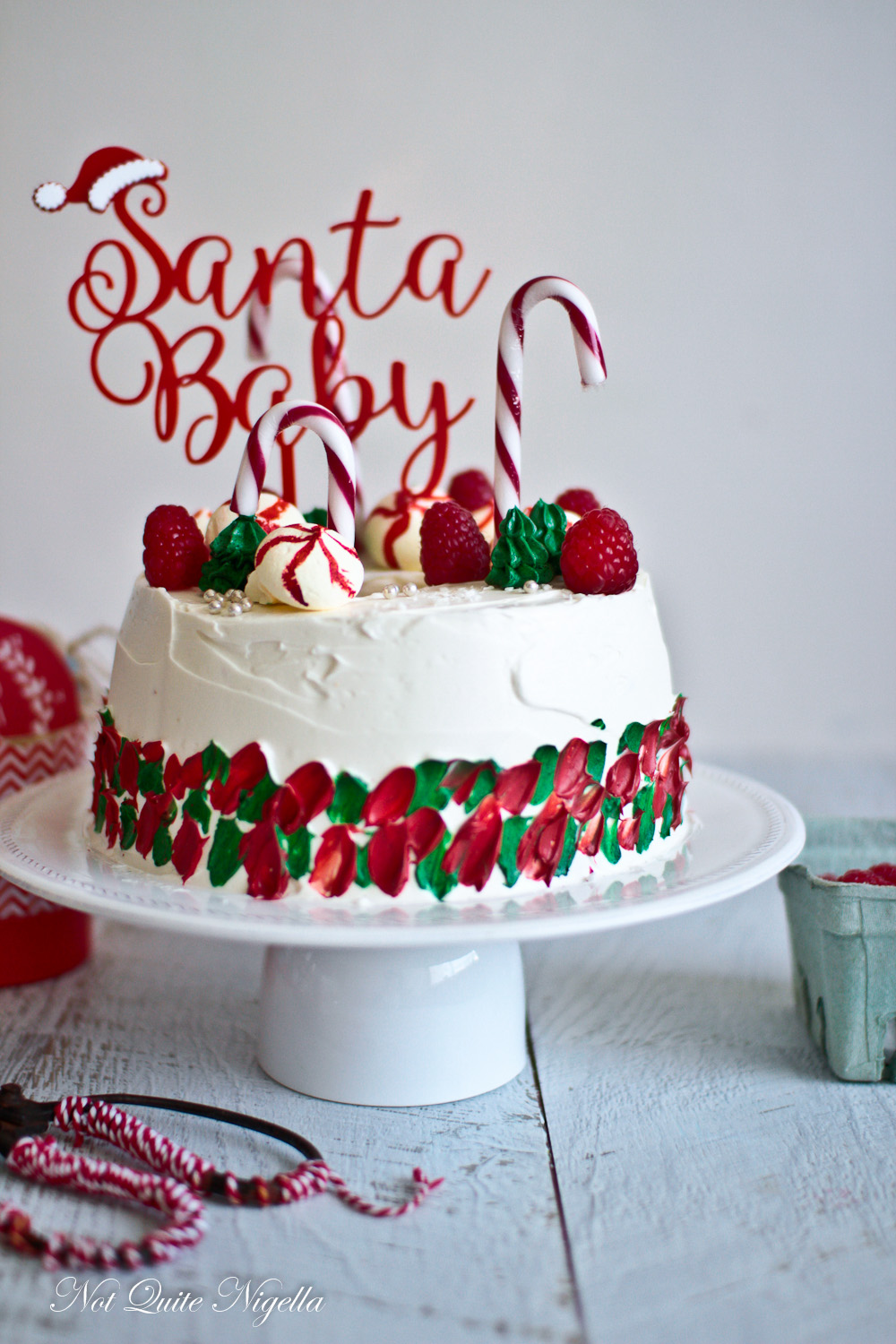 I saw Nina yesterday and she was not so looking forward to Christmas because she had found herself in a "Christmas Crisis". It is prime busy time for her dog minding business but that meant that she and Garth have not been able to go shopping and buy presents. She had intended to make her favourite ever cookies (the pistachio biscotti from Grandma's, recipe here) but she locked herself out of the house (again!) and then never got around to making them even though she had the ingredients. We tossed around ideas and she came up with a, "Merry Christmas, here's your deconstructed pistachio biscotti for you to bake yourself!" idea.

"Then I've got to make Garth a Japanese dinner!" she said, her shoulders slumping in despair. You see this year for Christmas Garth bought Nina a car. Yes a brand new car. Well played Garth! Obviously it's hard to compete with a car so she bought him a great present based on their recent trip to Japan and planned to make him a Japanese dinner.

Alas the plans to make sushi had sort of fallen away when she surveyed everything that she had to do. "So I've decided I'm going to order the sushi and sashimi," she said fixing the problem with a phone call. She explained that she would make the miso soup (well add water to the mix) and boil the soba noodles to be served with a sauce. And with that she solved her Christmas dilemmas with some help from a restaurant! And then it was onto the next task before Christmas!

So tell me Dear Reader, are you flat out before Christmas? Have you availed yourself of help like this at crucial times? And when do you celebrate your main meal?

Baker's tips: start with room temperature eggs egg whites. If it is cold where you are, then submerge the eggs in a bowl of hot water-this will help them whip up to their full potential. If you have fresh duck eggs, these are even better because they whip up even more because of the higher protein content (which is why I put the egg whites as a cup measurement). When you separate your eggs, make sure that there is no trace of yolk. Make sure that your mixing bowl and beaters are spotlessly clean too.

Step 1 - Preheat oven to 180C/350F and have an ungreased 20cm/8inch chiffon or angel food tin ready (do not grease!). Sift the flour, 1/2 a cup of sugar (you will use the other half for the egg whites) and salt together four times. Set aside. 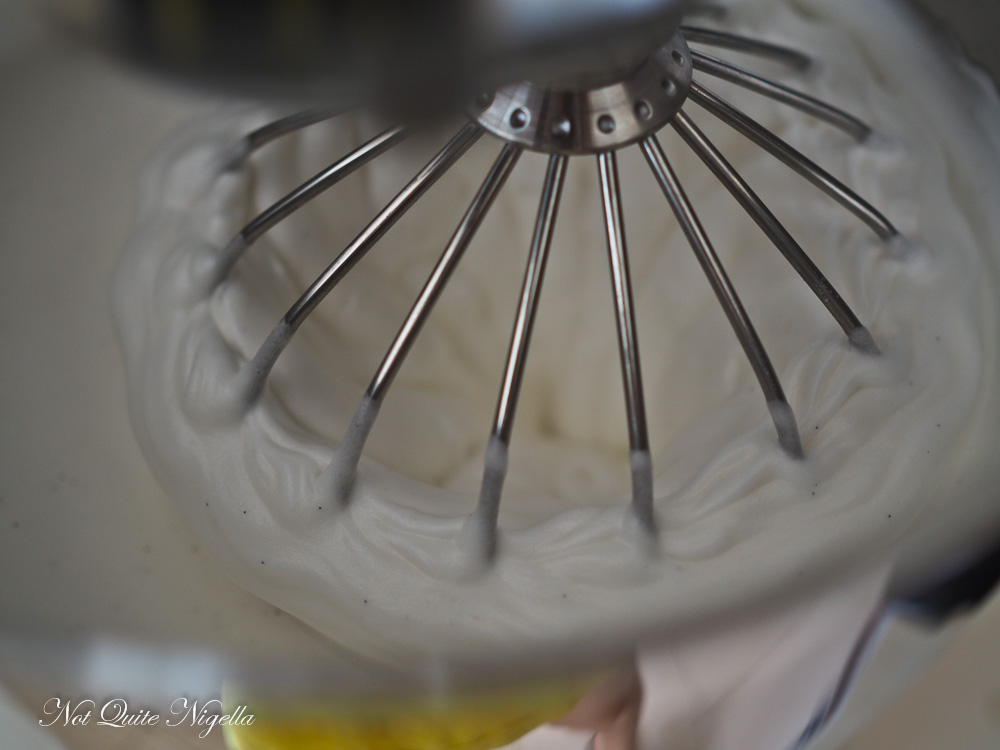 Step 2 - Place the egg whites in a mixing bowl with the cream of tartar and whip on a medium high speed until you get soft peaks. Then gradually pour in the sugar while it is mixing and the vanilla and whip until you get stiff peaks. 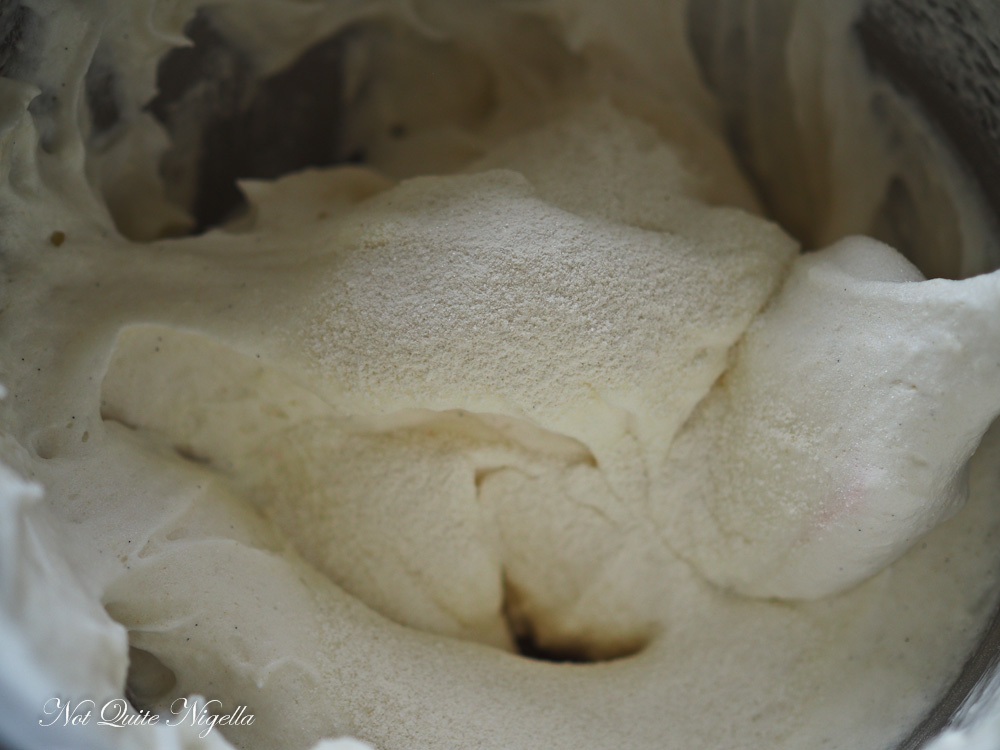 Step 3 - Fold in the flour into the egg mixture in 4-5 batches (I sift it in) making sure to catch the flour at the bottom of the bowl. Don't worry if the mixture deflates somewhat, it will deflate but it is important to mix through the flour properly. Spoon into the tin and then tap against the counter firmly but gently to get rid of any large air bubbles. Bake for 30 minutes or until the top of the cake springs back lightly when pressed. Cool in the tin and then use a palette knife to loosen the sides and then the base. Cool completely and place on a serving plate. 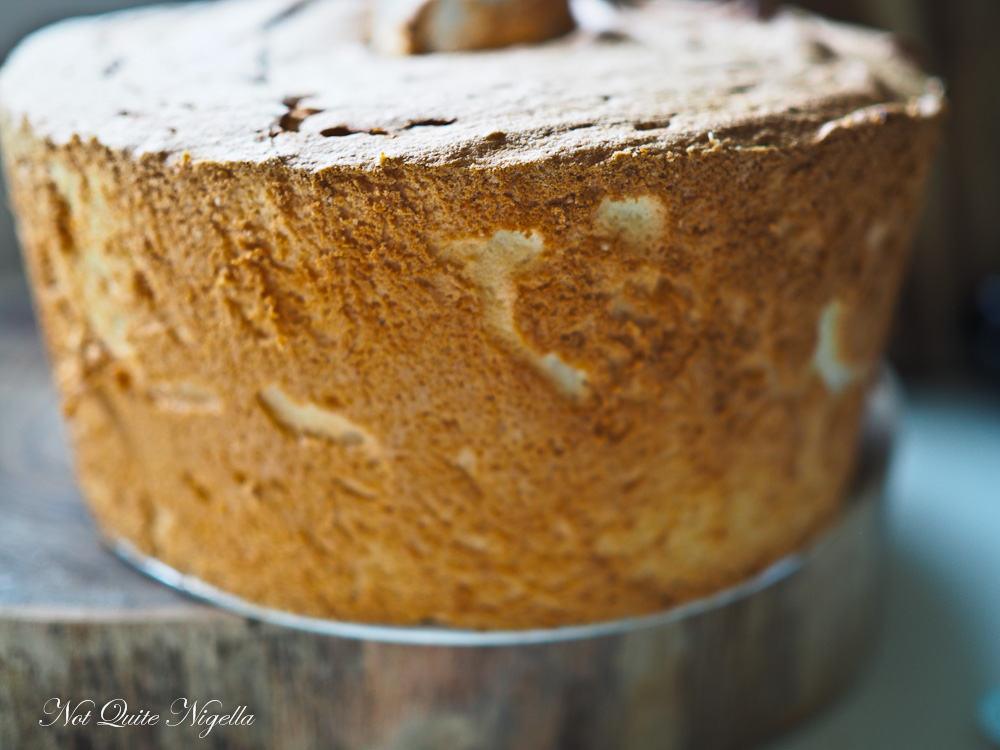 Step 4 - Take the butter and beat it on a low speed with an electric mixer for 5 minutes-the saying is "Whip it til its white" where the yellow butter will turn whiter. Then add the sugar and water in two lots beating for a total of 10 minutes. You should not feel any sugar crystals between your fingers. 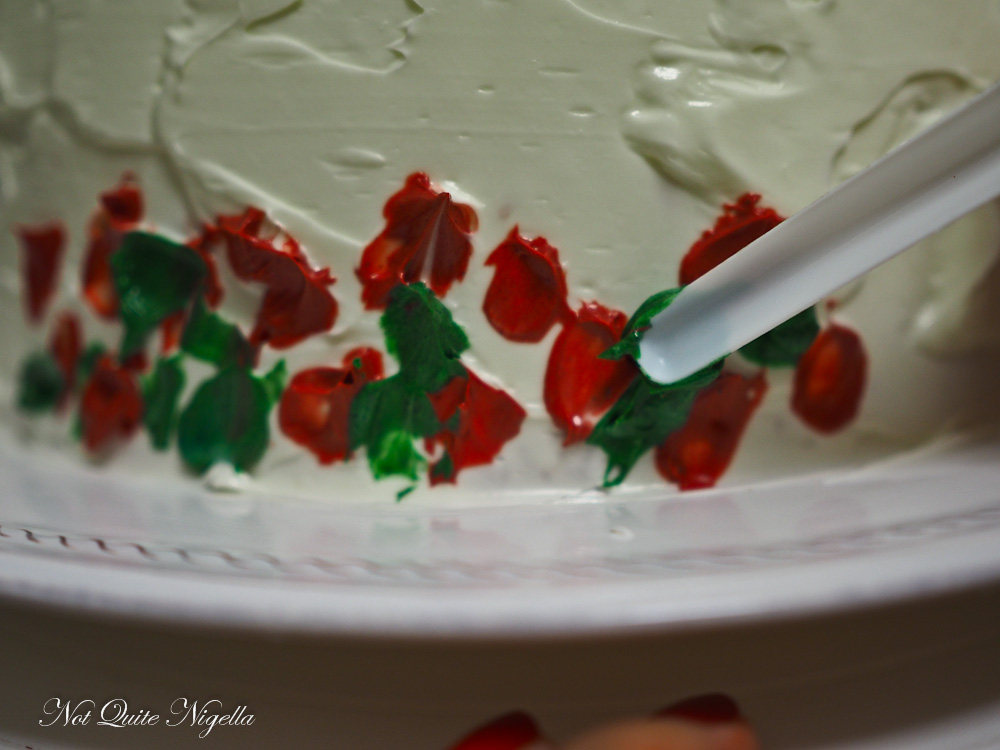 Step 5 - Reserve 6 tablespoons of buttercream. Take two bowls and divide the buttercream into 3 tablespoon portions and colour one red and the other green. Spread the white buttercream over the whole cake with a palette knife. Then take the end of a teaspoon and dab the two colours on the side of the cake-I start on the back of the cake just to test the pressure, you want to use a bit of pressure there. Then decorate it with candy canes and chocolate truffles. I also used this Santa Baby cake topper from Little Event Boutique!. Isn't it gorgeous? Serve with fresh berries and an egg nog custard (recipe here). 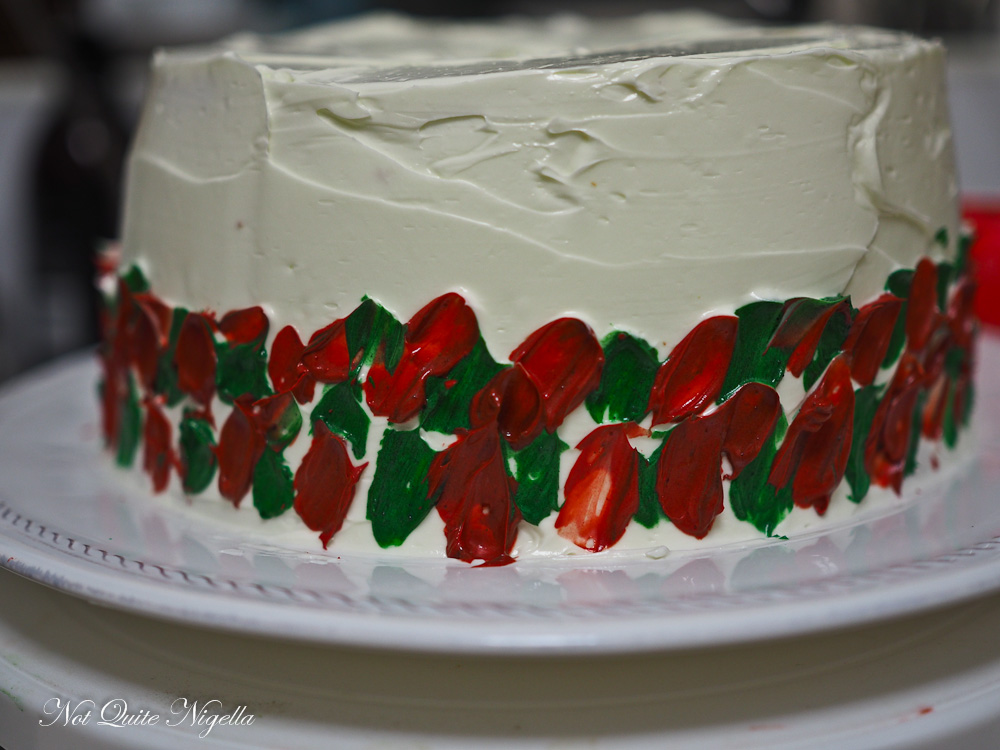