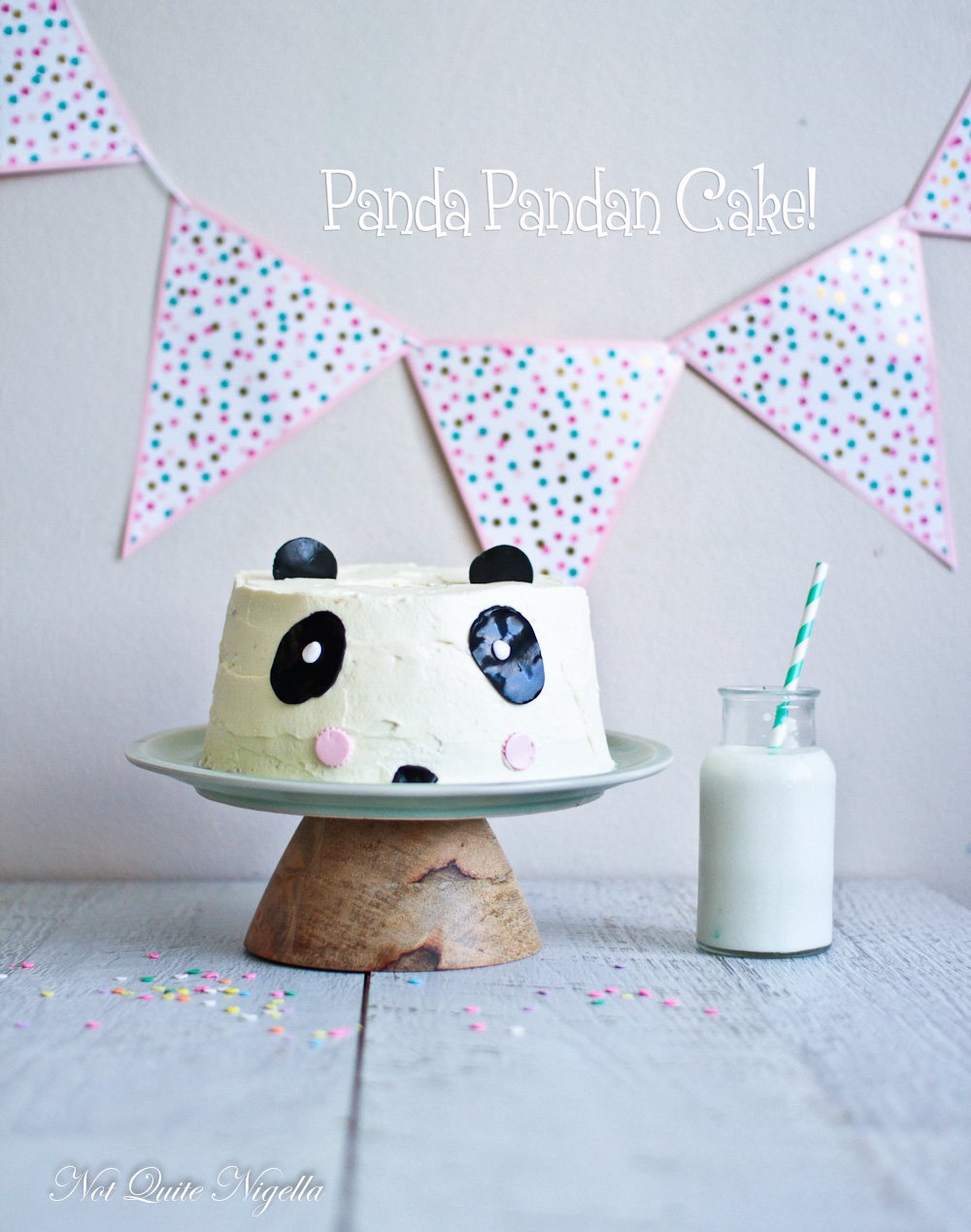 Do you love those unicorn cakes and animal cakes but the thought of covering something in ganache and fondant sounds like too much? Dear Reader I've got you covered! Enter the Panda cake! It's every bit as cute but so much easier to make and decorate. The pandan chiffon cake is light, fluffy and dreamy with a gorgeous aromatic flavour making it truly one of the classic Asian cakes! I called my pandan panda cake Pan Pan (meaning Hope).

While I adored the unicorn cake this is really so much easier. It came about as I was curious to see if I could make a quicker version of an animal cake without fondant and ganache. I decided to make my panda pandan flavoured as I came across some fresh pandan leaves at the market. For those that are new to the pandan flavour, pandan leaves from the screwpine tree are found in Asia mostly found in the Phillippines, Singapore and Malaysia (its omnipresence in Asian sweets means that it is often called the vanilla of Asia). 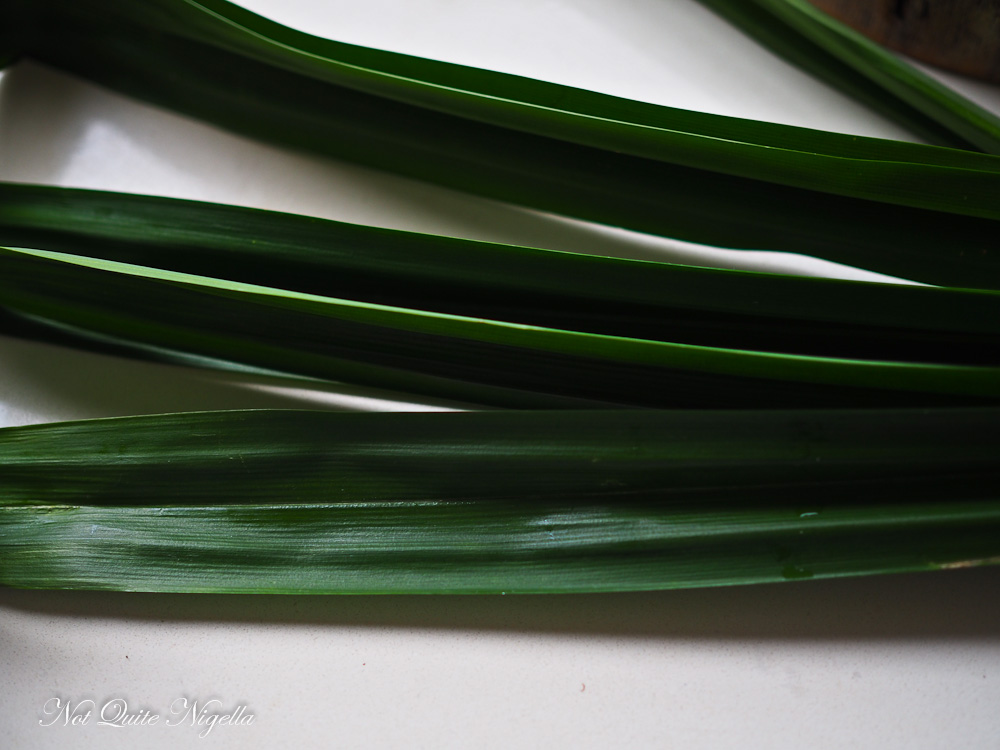 I'd describe the aroma of pandan as almost like coconut but not, it almost reminds me of jasmine rice's aroma but not which makes me very unclear I do realise. The leaves also have a grassy/botanical aroma to them whereas commercial pandan paste doesn't as much. It's gorgeous and it also colours food green.

In the absence of fresh pandan leaves pandan paste will do nicely (also called Aroma Pasta Pandan) and this is found at Asian grocery stores. Pandan paste tends to have more green colouring added and it's quite a viscous consistency. The flavouring is sweeter and it is very concentrated-1/2 a teaspoon is enough to flavour a whole cake. 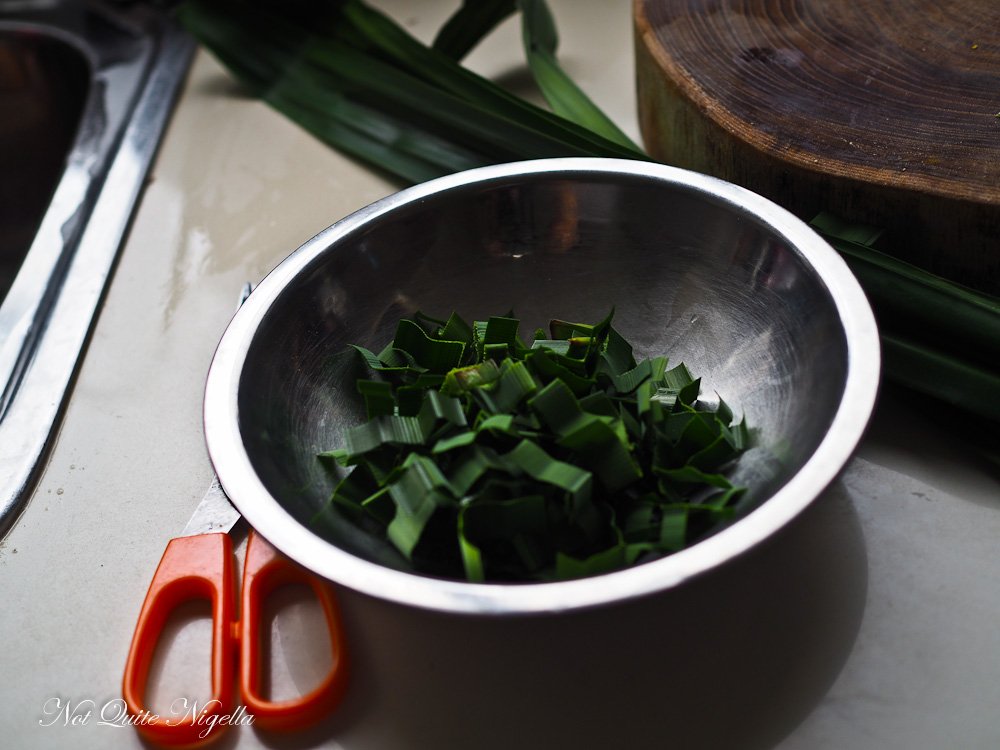 To use pandan leaves in cooking you can either take one leaf and knot it and put it in a pot with rice or meat and cook it alongside-this will impart some of the flavour (although for me, it was mostly aroma while it was cooking and it wasn't as strongly impregnated). For me the best way to use fresh pandan leaves and maximise pandan flavour is to blend them up, say 4 or 5 leaves finely cut up with scissors with 1/2 cup of water. Blitz until you get a fine mulch and then strain in a sieve, discarding the fibres. That concentrated bright green liquid is pure pandan aroma and flavour and should be used as soon as possible. 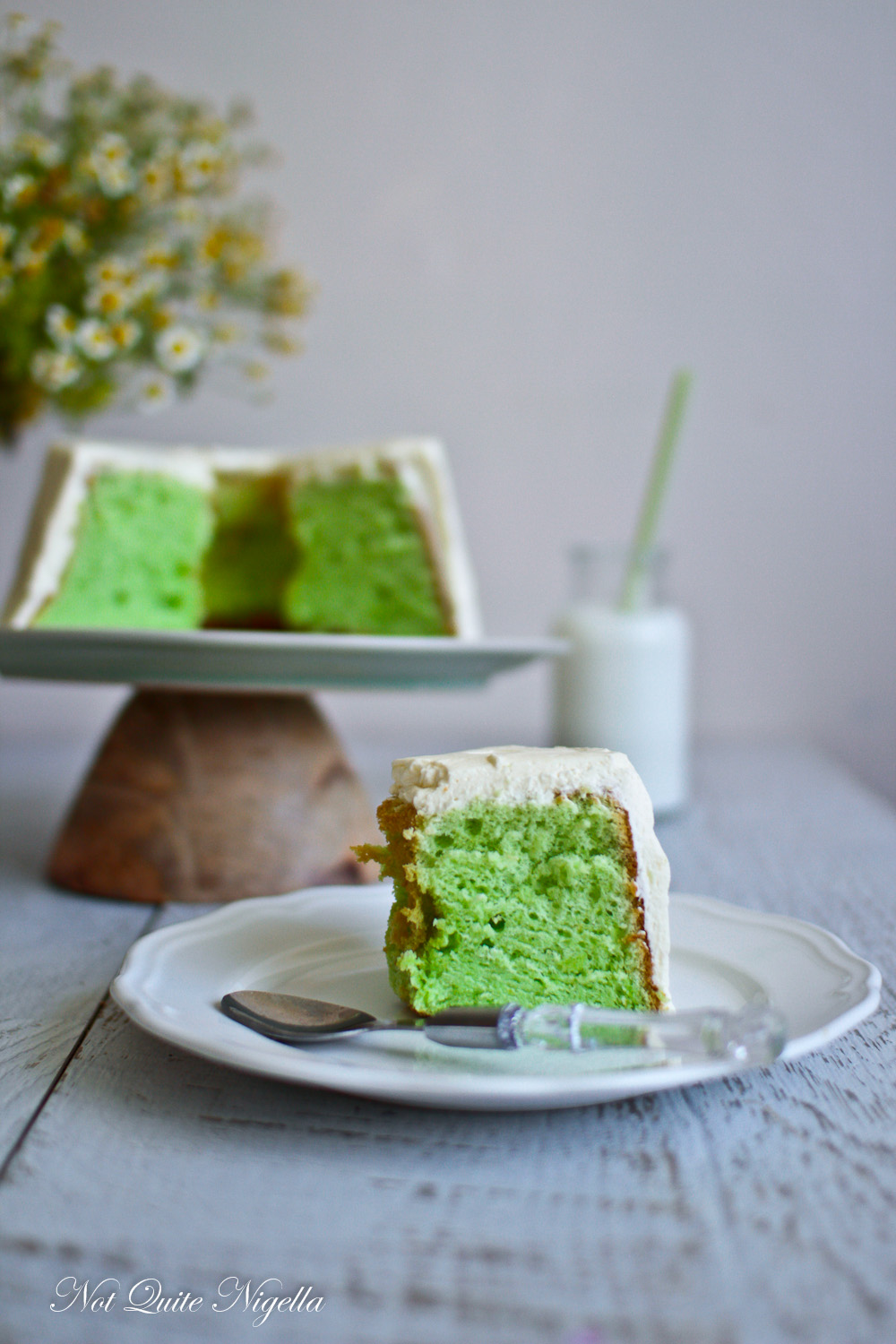 The inside of the pandan chiffon cake

And as for little Pan Pan panda, all this cake needed was a coat of whipped cream flavoured with a bit of coconut and a few features cut out to make the panda face! Seriously it is one of the easiest kid's birthday cakes to make ever. If you want a shelf stable cake simply replace the whipped cream with buttercream. I only used whipped cream because I had some cream that needed using. 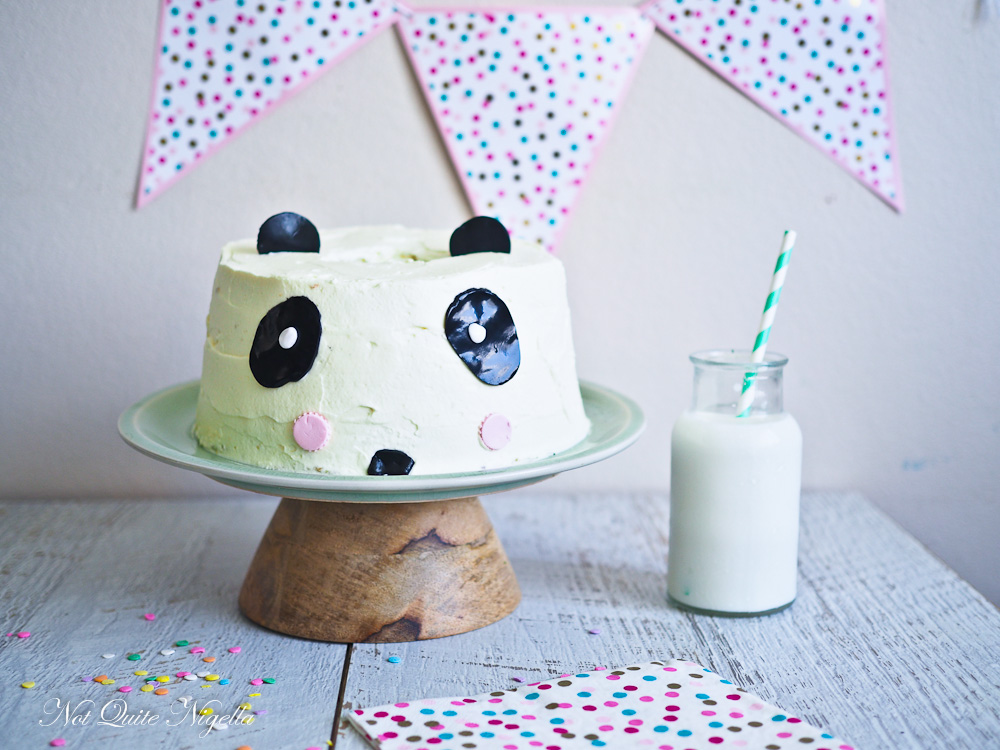 Speaking of animals, I asked Nina about her dog minding situation. You may remember how she found herself looking after five dogs at the same time in her dog minding business and it that it caused some tension with her and her fiance Garth and his dad Colin who has little time for Nina's antics.

She explained that they had discussed "dog-gate" at length and had arrived at a compromise. "I told Garth I would only look after one dog at a time," she explained, pausing. "Well one until another dog owner asks me, then I'll take that dog too." Garth shook his head wearily and we fell about laughing. That is classic Nina logic. She added "I tried explaining that to Colin and I think his head was about to explode!" she said giggling.

So tell me Dear Reader, have you ever been accused of having unique logic? And have you tried pandan? How would you describe the flavour? 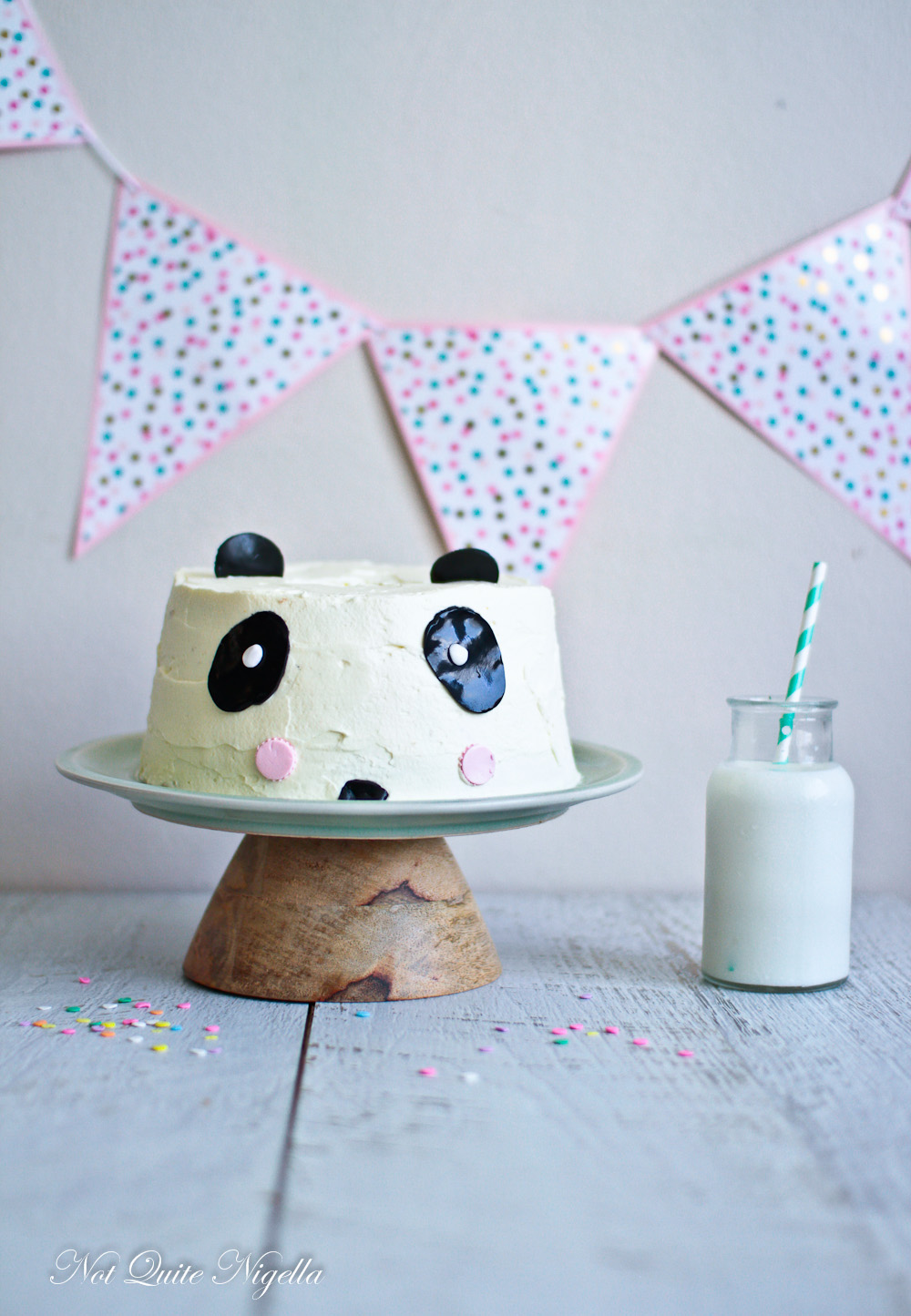 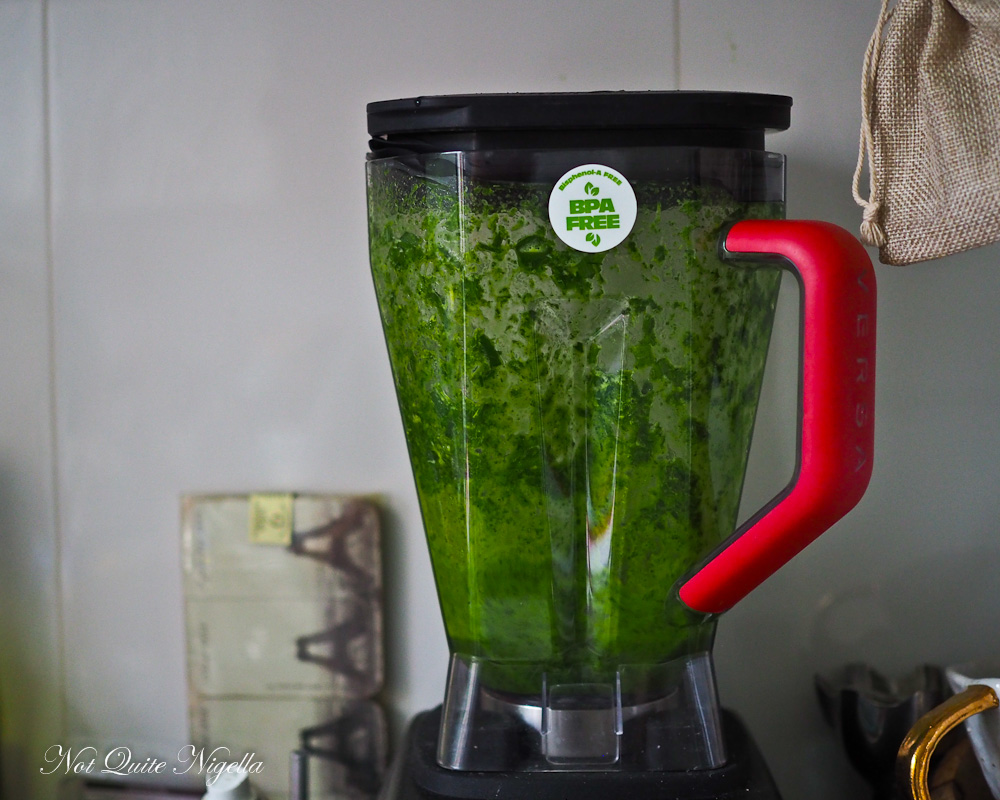 Step 1 - First make the pandan juice if you are using fresh leaves. Use gloves (pandan leaves can make some people's skin itchy). Take the leaves and cut them into small pieces (about 1/2 a centimetre each). Place in a food processor or blend with 1/3 cup of water. Process until the leaves become a fine mulch you have bright green water. Strain in a sieve, discard the fibres and reserve for use on the same day.

Step 2 - Preheat oven to 180C/350F. Have a chiffon tin ready but do not grease or line it. Separate the eggs making sure that there is no yolk in the whites. Beat the whites in a large bowl with the cream of tartar until soft peaks form. Then slowly add in the 80g/2.8ozs. of caster sugar until you get stiff peaks.

Step 3 - Then in another bowl whisk the yolks and 100g/3.5ozs of caster sugar until pale. Whisk in the oil and combine, then add the pandan juice (or paste if using) and coconut milk. Sieve in the cake flour, baking powder and salt. Then add the yolk mixture into the whites and fold making sure that there are no streaks of colour and that the mixture is uniform in colour.

Step 4 - Pour the batter into the tin and gently tap it against the countertop to remove any large air bubbles. Bake for 45 minutes. Cool in the tin completely (I don't tip it upside down but others do but I find the cake is too delicate to do this).

Step 5 - Using a butter knife or a long, thin knife gently separate the cake from the tin making sure to get all of the sides. I usually let it sit overnight or for a few hours because when it is first cooked as it is very delicate. 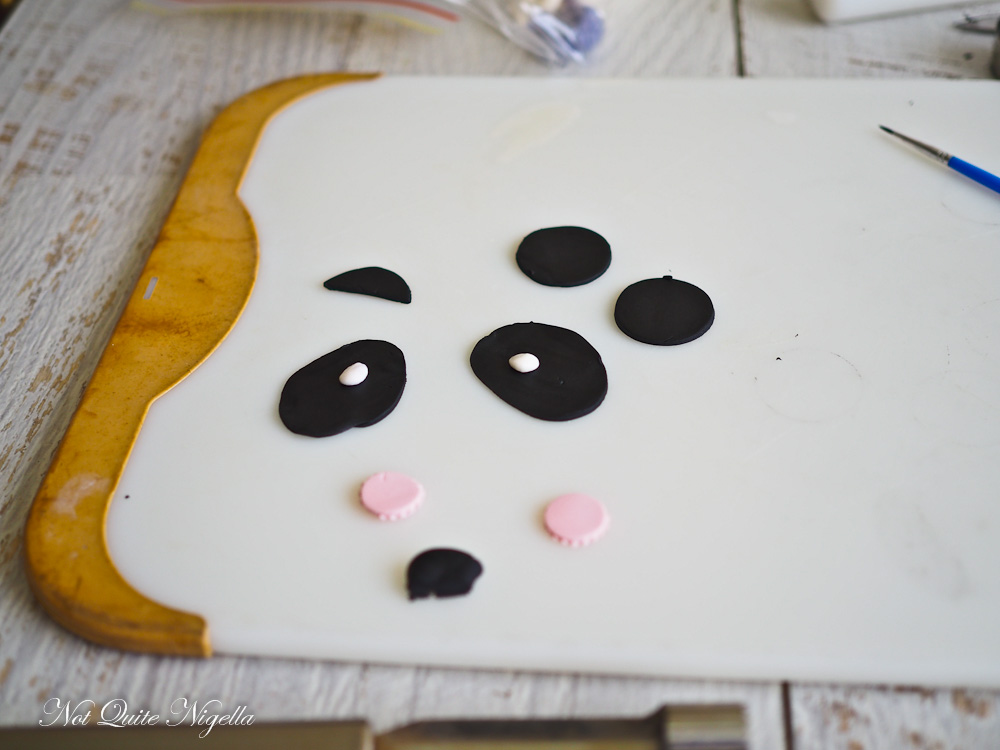 Step 6 - To decorate cut out two circles of black gum paste and then use a small rolling pin to make the eyes larger and more oval shaped. Cut out one nose and two circles for the ears. Then cut out two small pink circles of gum paste for the blush. Allow to dry for about 30 minutes to stiffen. Fondant takes longer than gum paste and you can use it but just make these the day before so that they have enough time to harden as you want the ears to stick up in the cream. 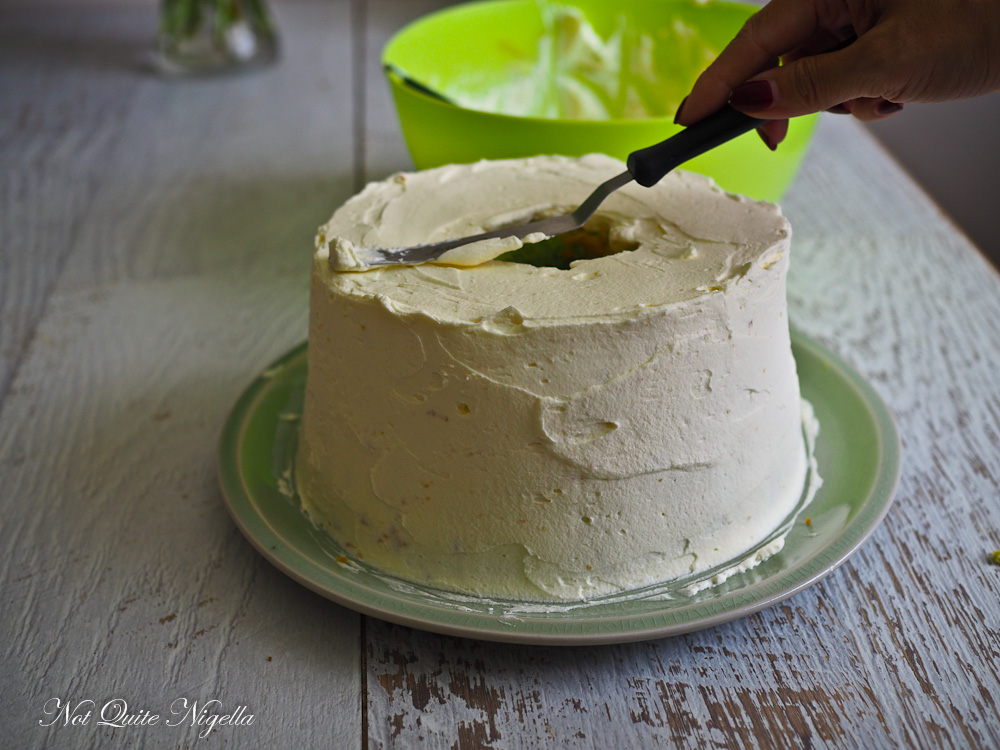 Step 7 - Whip the cream with the 2 tablespoons of caster sugar and coconut essence until soft and spreadable. Gently spread the cream over the chiffon cake. It may pick up some crumbs but I do a light layer of cream and then a thicker layer. Then stick the eyes, ears and nose on the cake and voila! You have a panda cake!