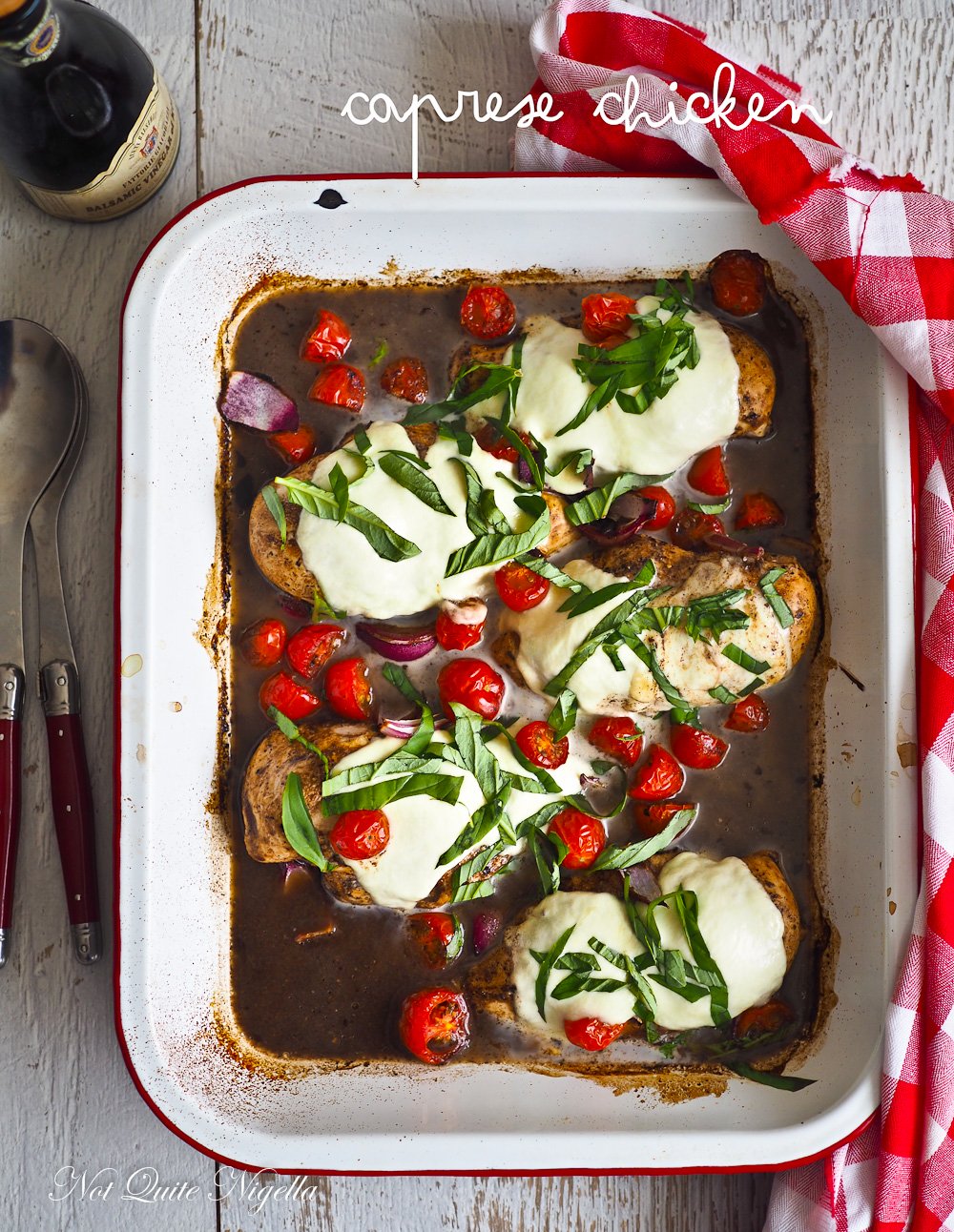 You won't believe how quick this divine tray bake is to make and how delicious the results are. Prep can be done in as long as the oven takes to heat up and then it's just 25 minutes in the oven before you've got a healthy and tasty Caprese chicken!

As soon as I saw this recipe on Grace's blog I knew I had to try it. The chicken breasts went straight onto the shopping list as did everything else. Grace's recipe called for it to be done in a skillet but I love tray bakes because they can be done in the oven with no attention needed at all. In the 20 minutes while it was baking I took off my makeup, have a shower and change into home clothes.

I have a little routine in the shower. I have this speaker that plays music via bluetooth from my phone in the shower. And afterwards I went into the bedroom to get changed and relax a little. And I must admit that I do love clicking on random things in my facebook feed. 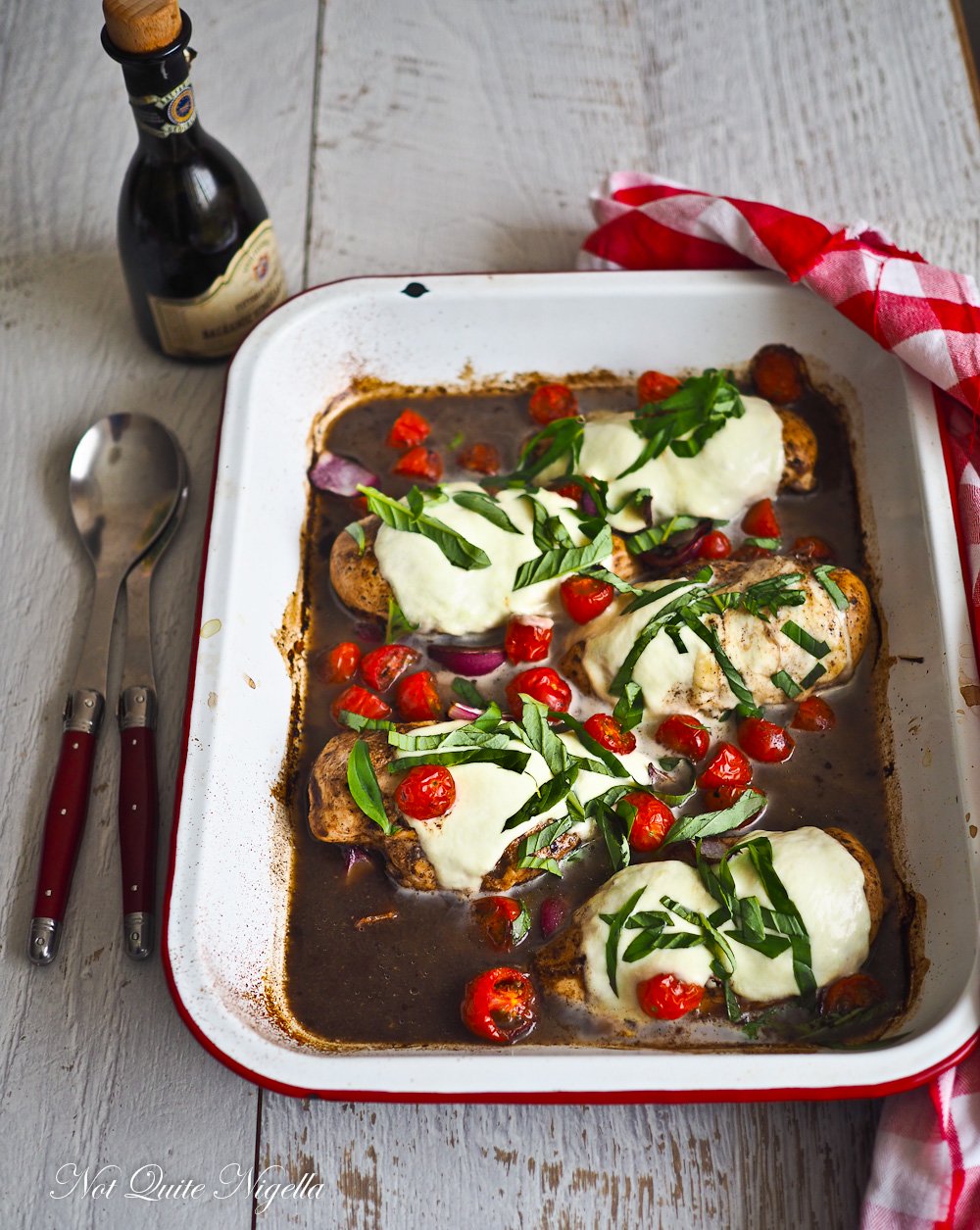 I watched a series of videos with Mochi by my side. The only thing was that the sound was quite low so I turned it up as high as I could but they had captions so it wasn't a big problem.

A few minutes later Mr NQN came out of the shower into the bedroom. "Thanks for that," he said grimacing with a sly smile. He usually doesn't mind listening to music while he showers but I hadn't turned off the bluetooth speaker and during his shower he had listened to (at full volume because I couldn't figure out why the sound was so loud) a series of viral videos in the style of the cinnamon challenge with people screaming and dogs barking. He was mid shower so he didn't want to get out of the shower to turn it down and what resulted was a less than relaxing shower, full of shrieking, dogs barking and the random things that I had clicked on.

"Oops sorry!" I said sheepishly, my taste in videos completely sprung. "Can I distract you with dinner?" I offered.

So tell me Dear Reader, do you listen to music or sing in the shower? Are you a tray bake fan? What do you do as soon as you get home from work?

Adapted from A Southern Grace 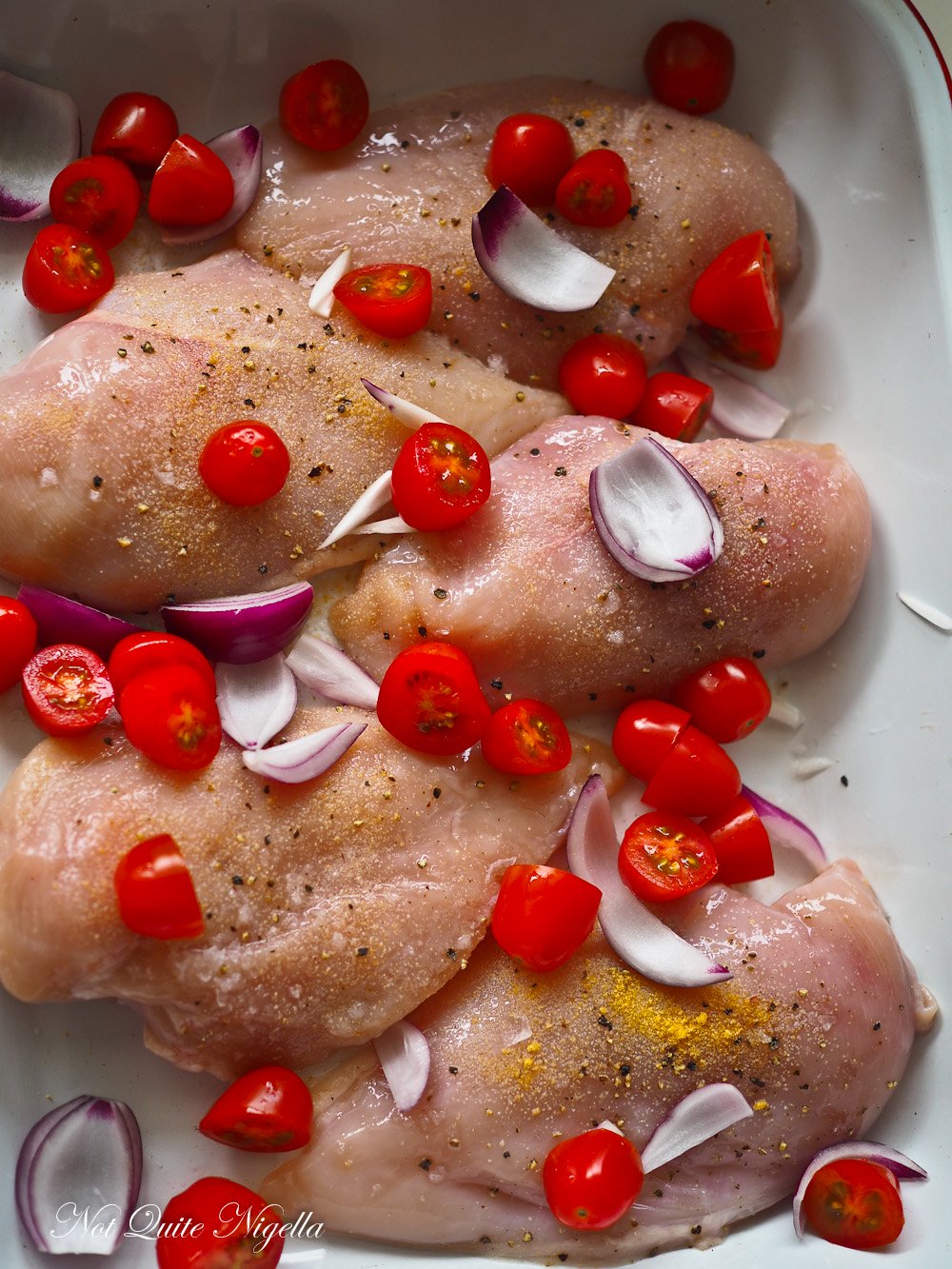 Step 1 - Preheat oven to 200C/400F. Place chicken breasts in a baking dish and sprinkle with salt, pepper and garlic powder. Place the red onion and cherry tomatoes in the tray. 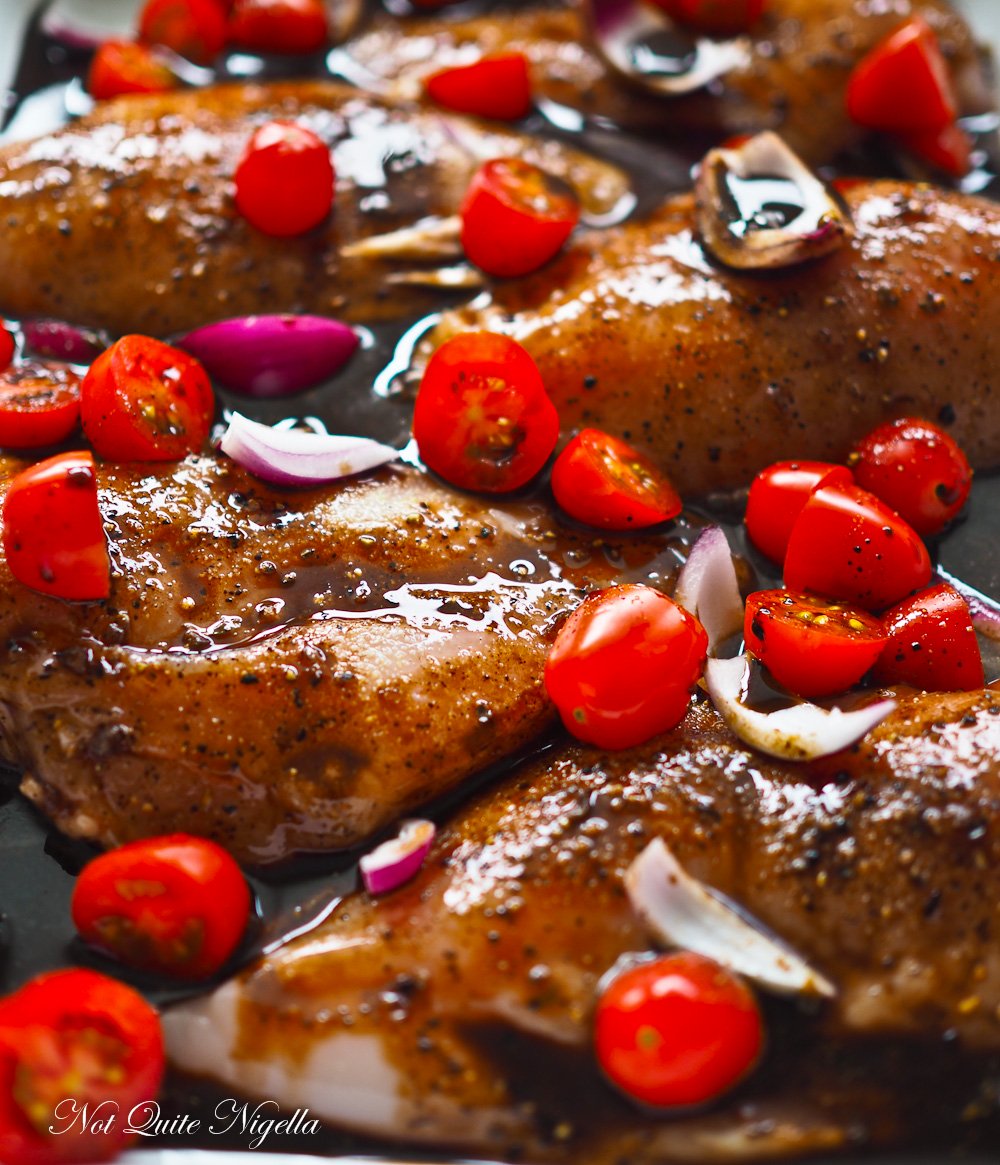 Step 2 - Measure the balsamic in a jug and add the sugar and mustard and whisk until combined. Pour over the chicken breasts and bake for 20 minutes. Then add the bocconcini halves on top of the breasts (one ball halved per breast) and bake for another 5 minutes. Scatter with basil leaves. 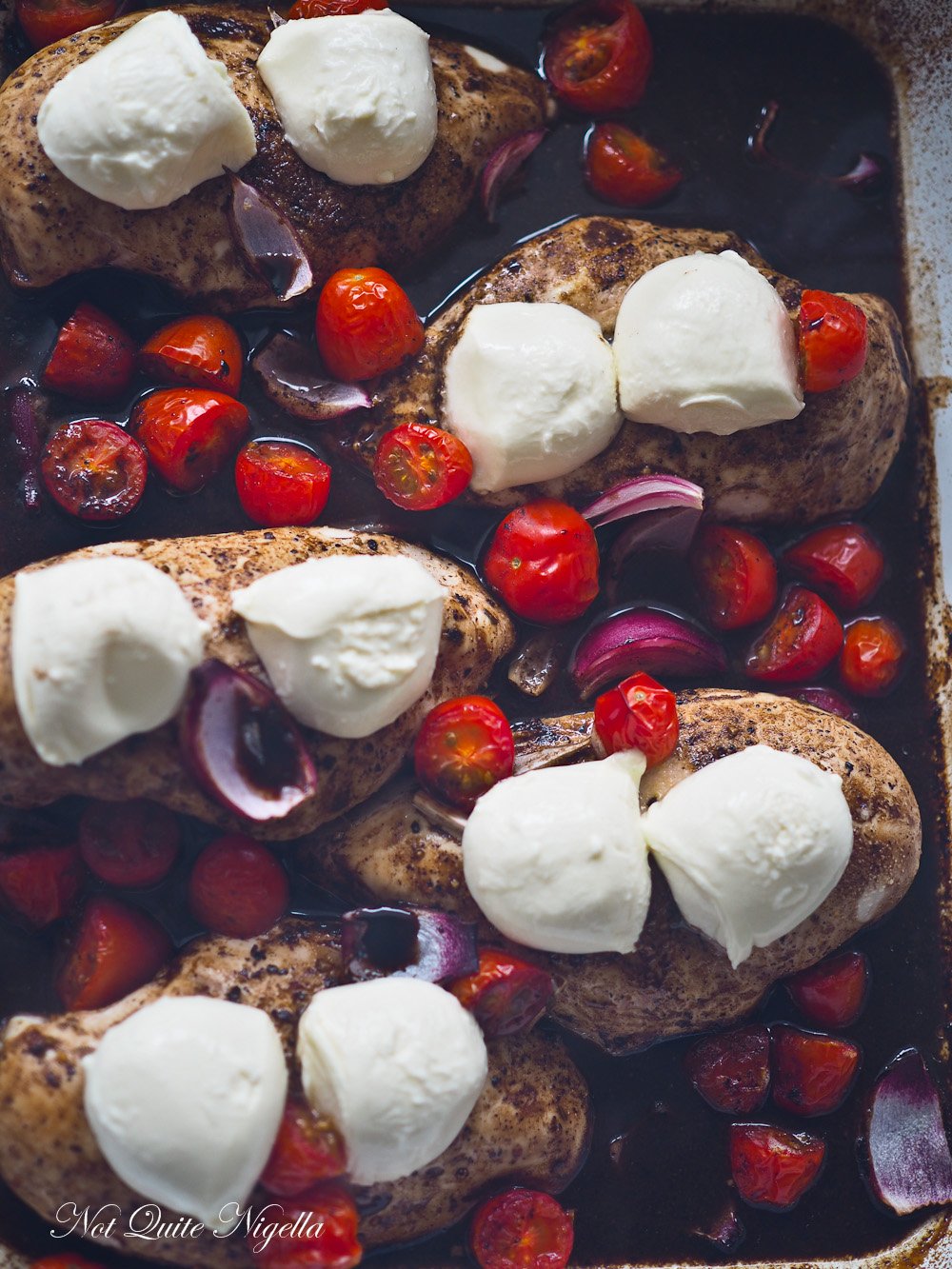