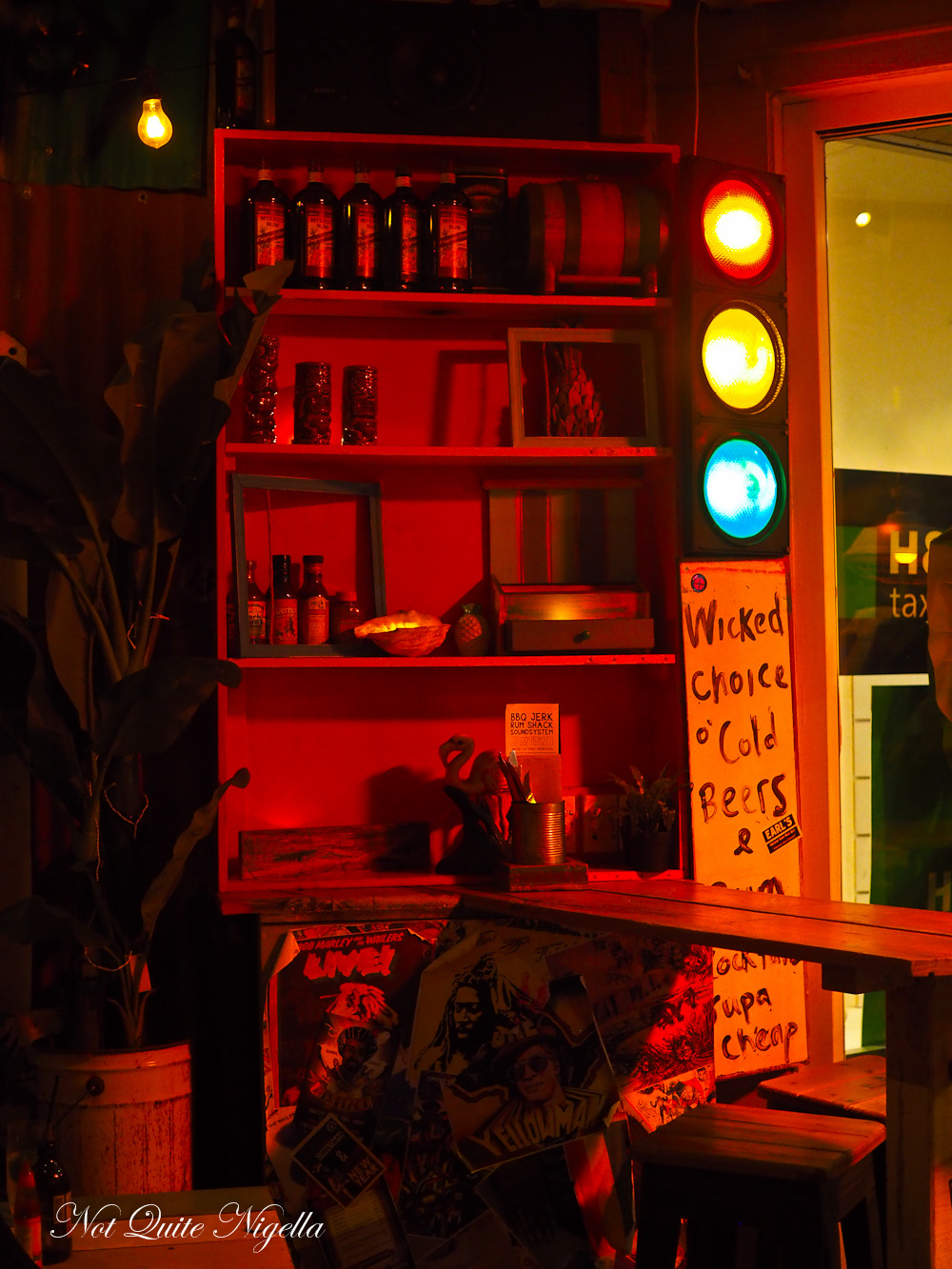 "Go on, I dare you to eat it," says Viggo to Mr NQN. He points at a slice of scotch bonnet pepper, replete with tiny seeds on top of a plate of jerk chicken. Jerk chicken can only mean one cuisine: Jamaican and tonight we are at Jamtown on Manly's Belgrave Street! 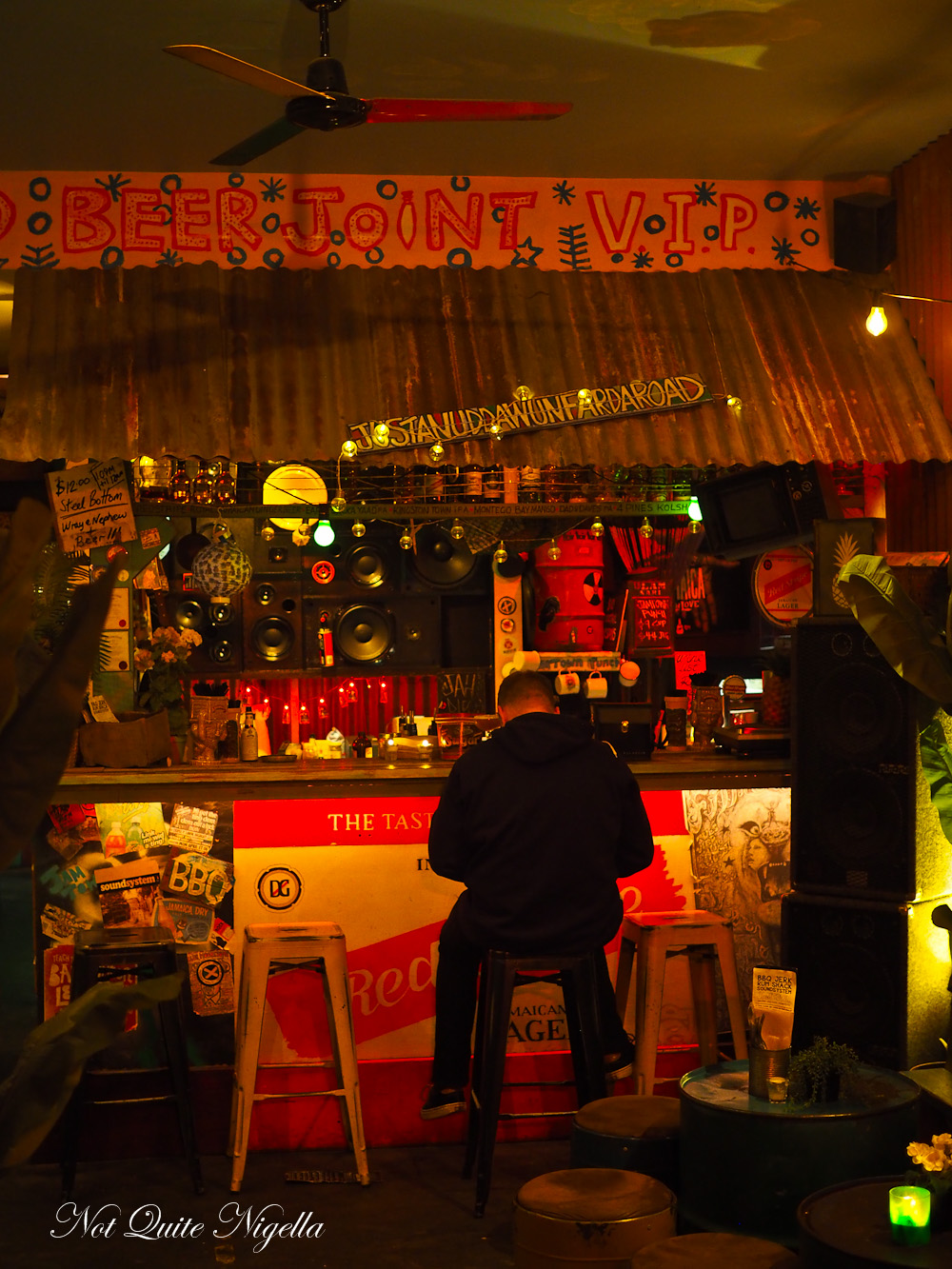 It was a long time between attempts to visit Jamtown. I was meant to go with my sometime vegetarian friend Laura in 2015. A kerfuffle ensued, they only accept email bookings and after a wait they told us they only accept bookings for groups of 5 or more. It was shelved for a long time until Manly locals Louise and Viggo suggested that we give it a go. 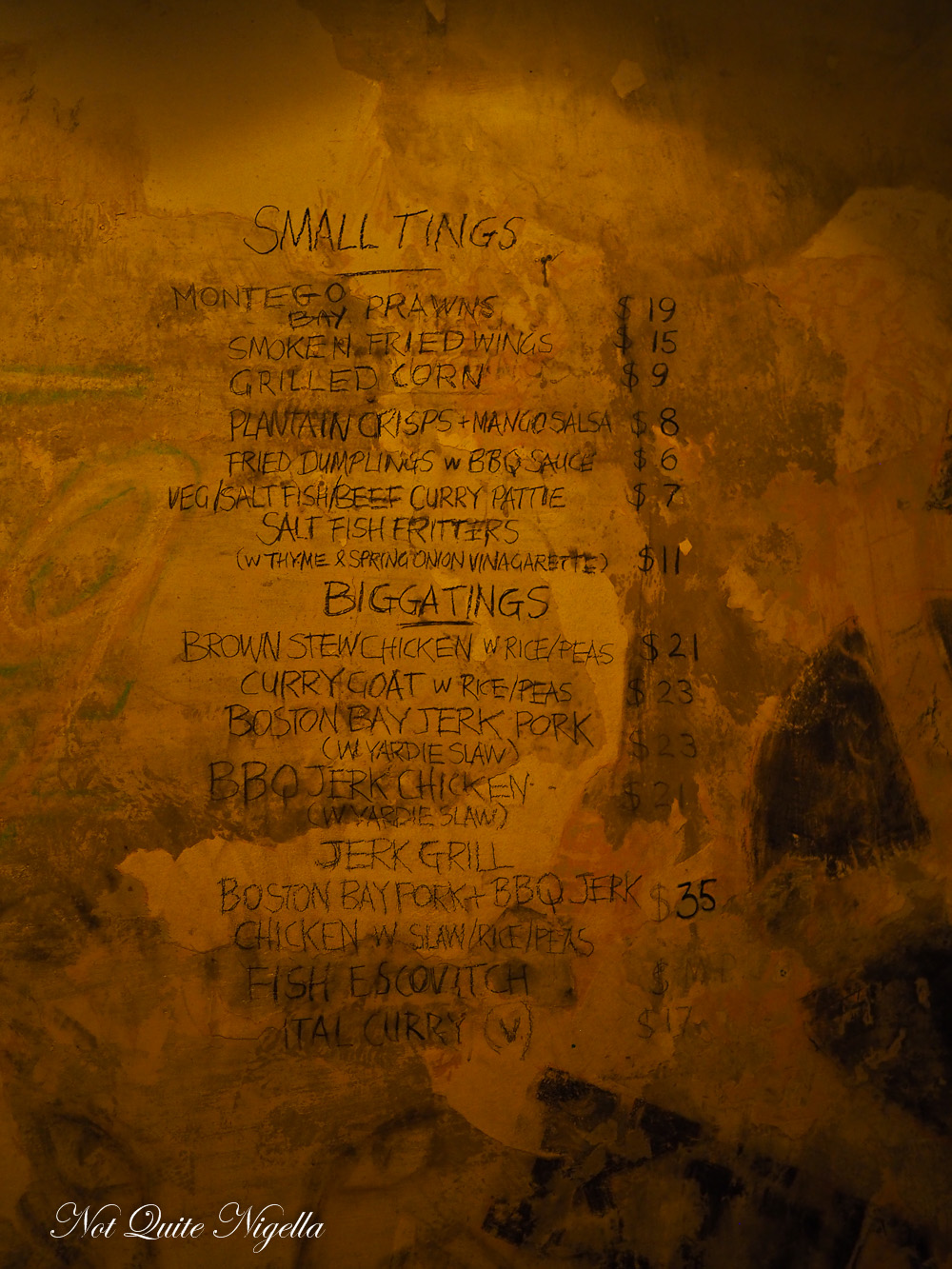 It's a small restaurant, decked out like a tin shack and owned by half Jamaican chef Kieren Bailey and co-owner Matt Poyntz. The menu is scrawled on the wall and are divided into "Smalltings" and "Biggatings". Staff are friendly and relaxed (it is Manly after all via Jamaica) and a pineapple spins on the turntable. 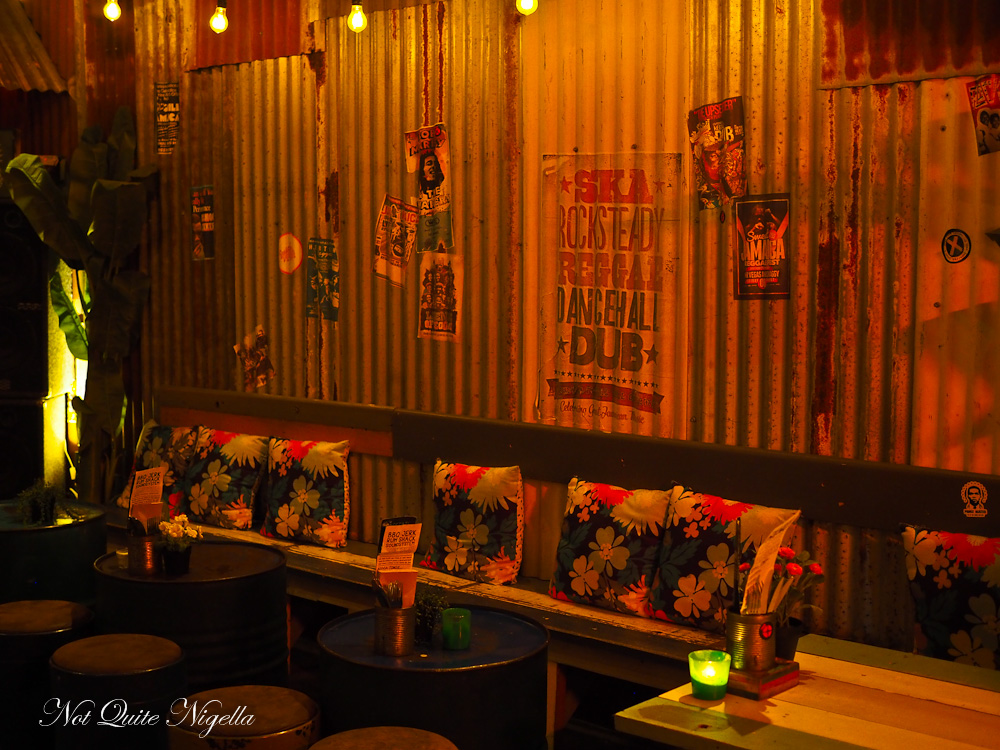 There aren't a lot of seats free this evening but luckily as we arrive one table is settling their bill and leaves soon after. We are here on Wing Wednesdays so all wings are 50 cents each. There's also happy hour from Tuesday to Thursday as well. Drinks are ordered-Jamaican ginger beer (super sweet), red stripe beer and a coconut water (not very sweet). 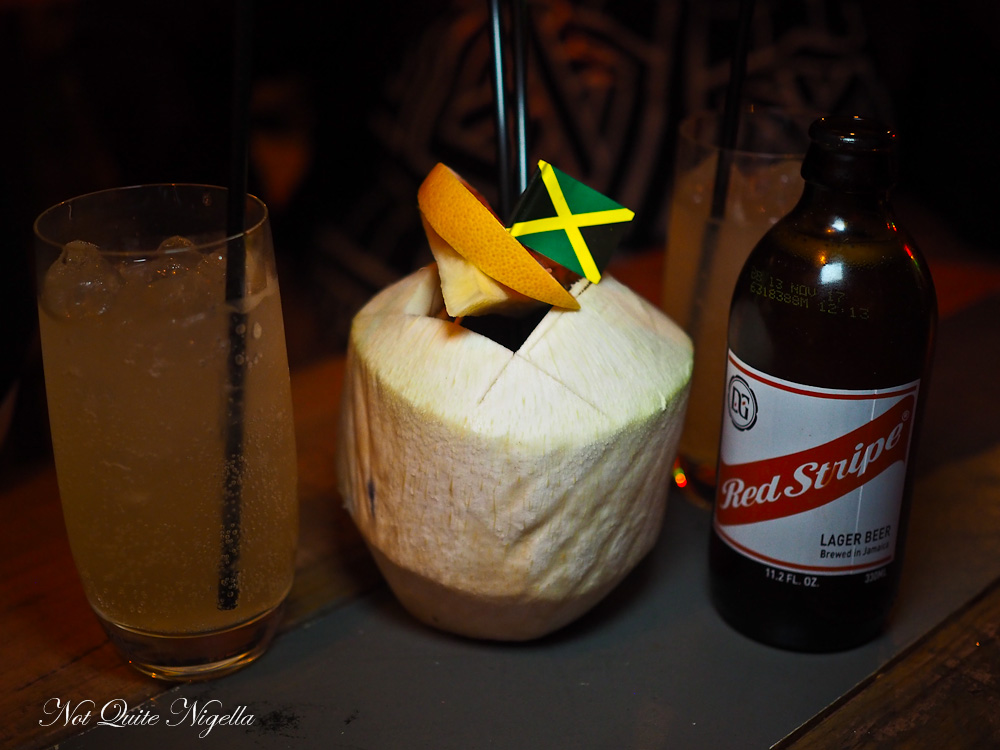 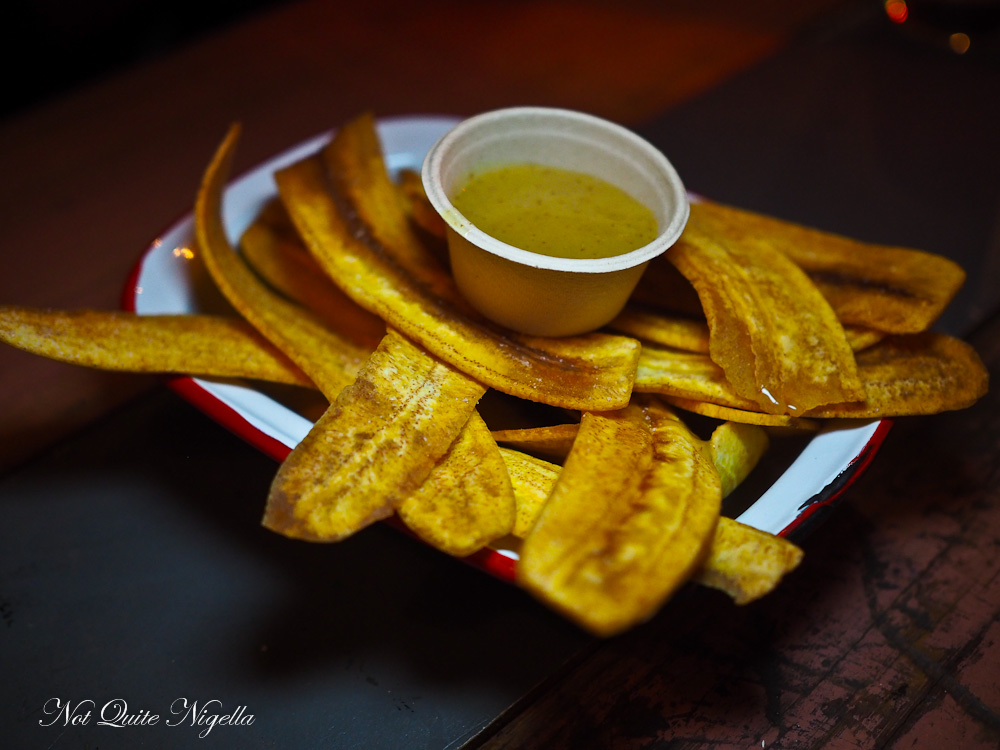 They tell us that the first two items we order are the most popular. The fried plantain chips come with a spicy mango and hot pepper salsa to dip them in. They're crunchy and not unlike thick potato chips. 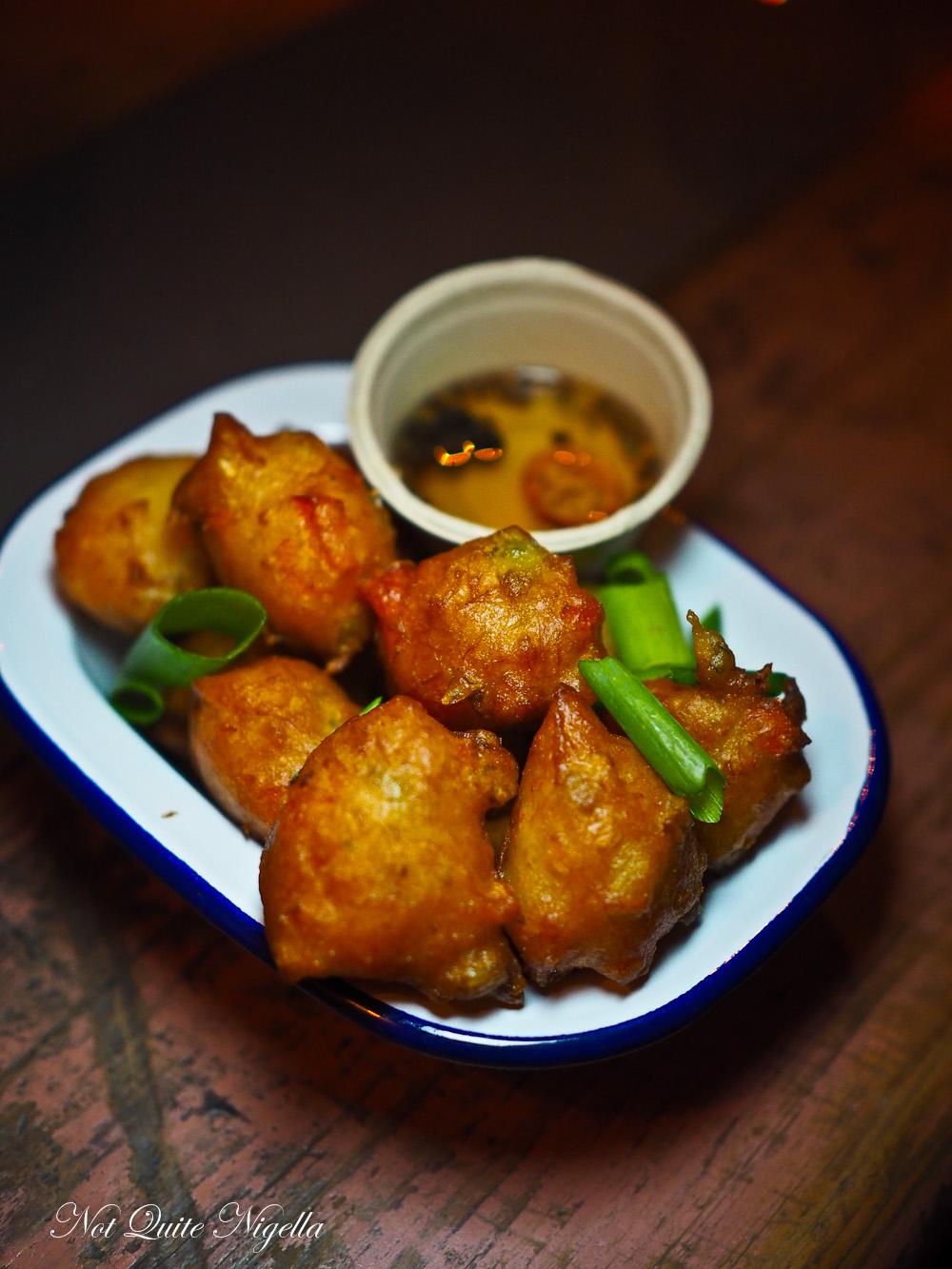 The salt fish fritters are small pop in the mouth fried fritters. These are very moreish and come with a thyme and allspice vinaigrette and they're impossible to stop at one. We notice that each dish comes with a different sauce. It's also fun mixing the sauces and for added measure there's also a range of hot sauces on the table. 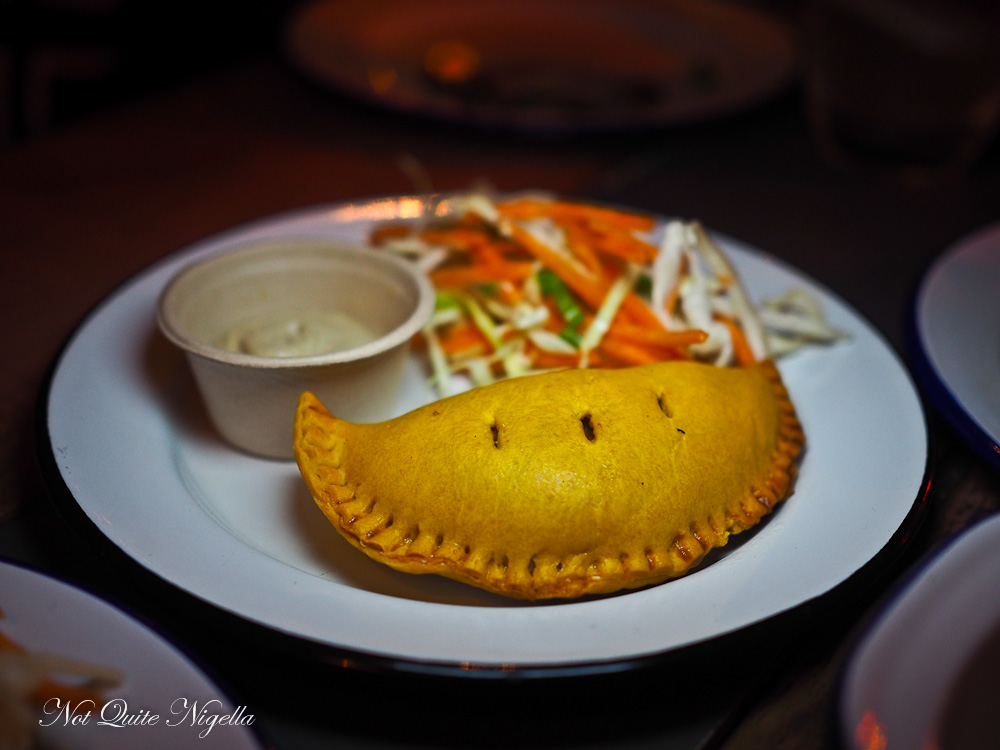 I'm pretty sure the woman who served us thought that we were bonkers sharing one pattie each but we have managed to share miniscule foods in the interests of trying as much as possible. The pattie is like a pastie Jamaican style. There is a beef one and a vegetable one and out of the two I actually prefer the vegetable one. The curry is perfectly seasoned and it has a good amount of sauce to it. 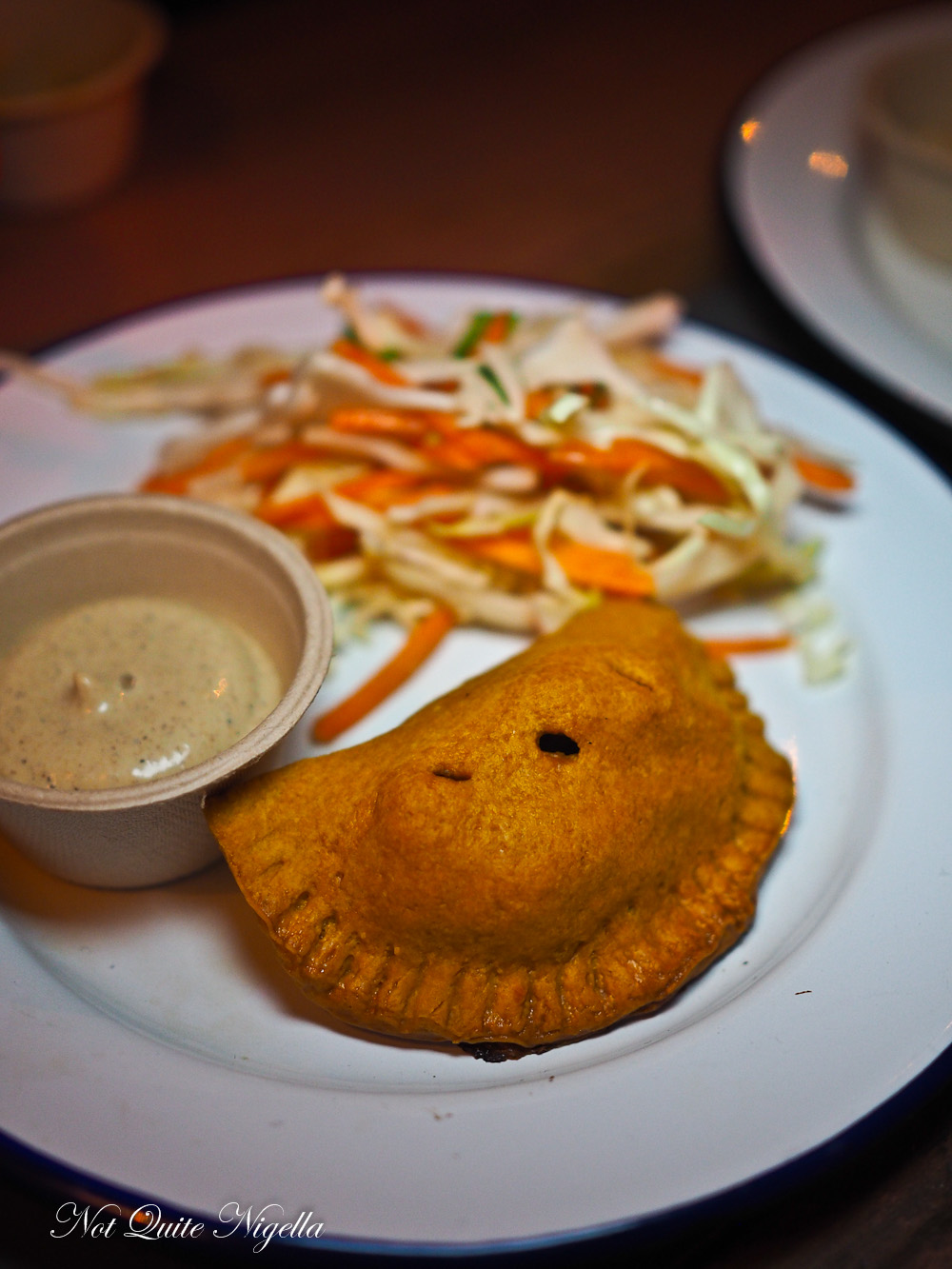 The beef pattie is good but it's noticeably smaller and drier with the beef. Mr NQN diplomatically says that he prefers my Jamaican patties. The main difference is the pastry on mine is different and flakier than their pastry but it's a matter of preference really. 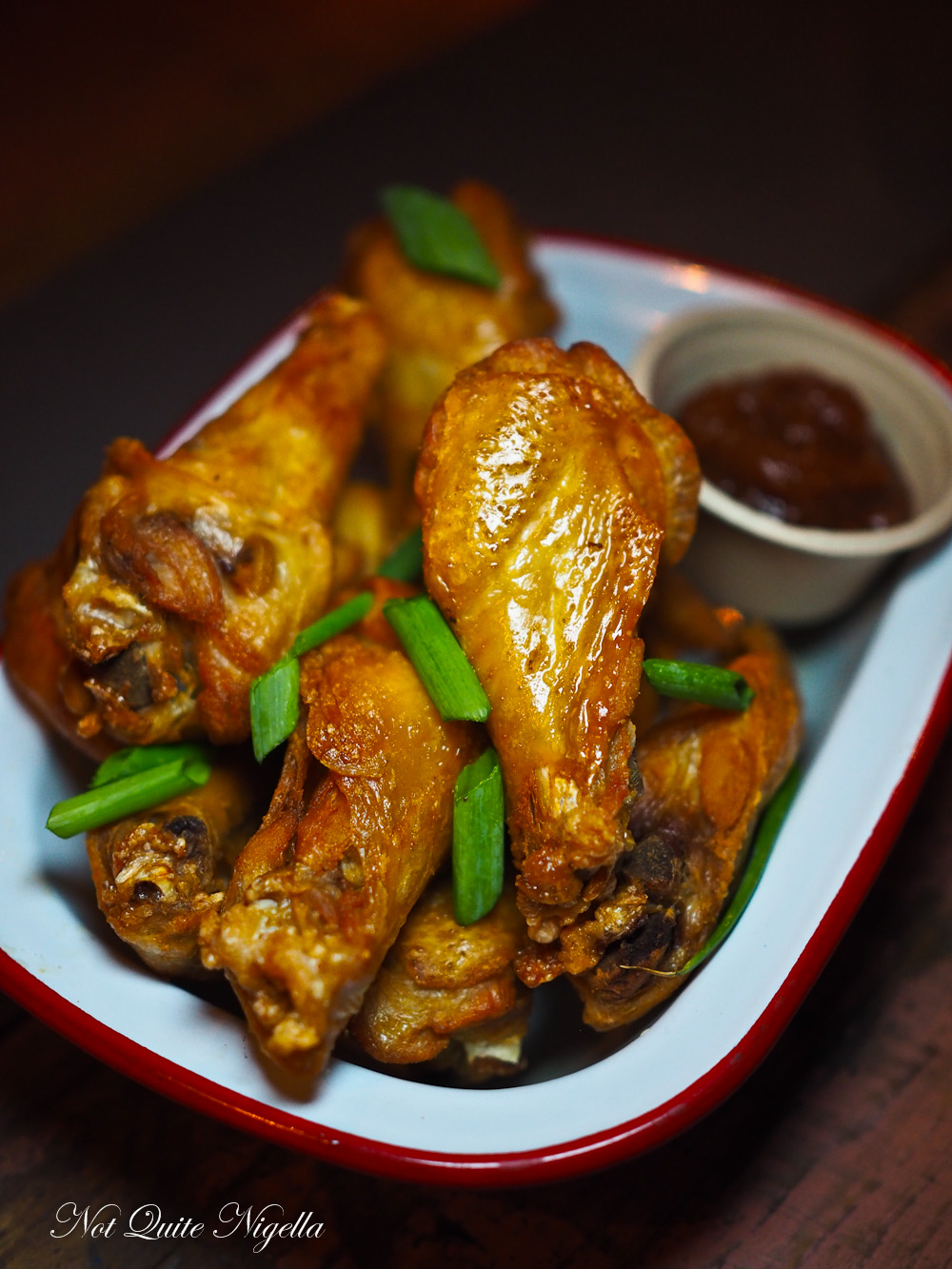 The wings come smoked and then fried which gives them a distinct flavour that reminds me of ham. They come with a smoked habanero molasses sauce. 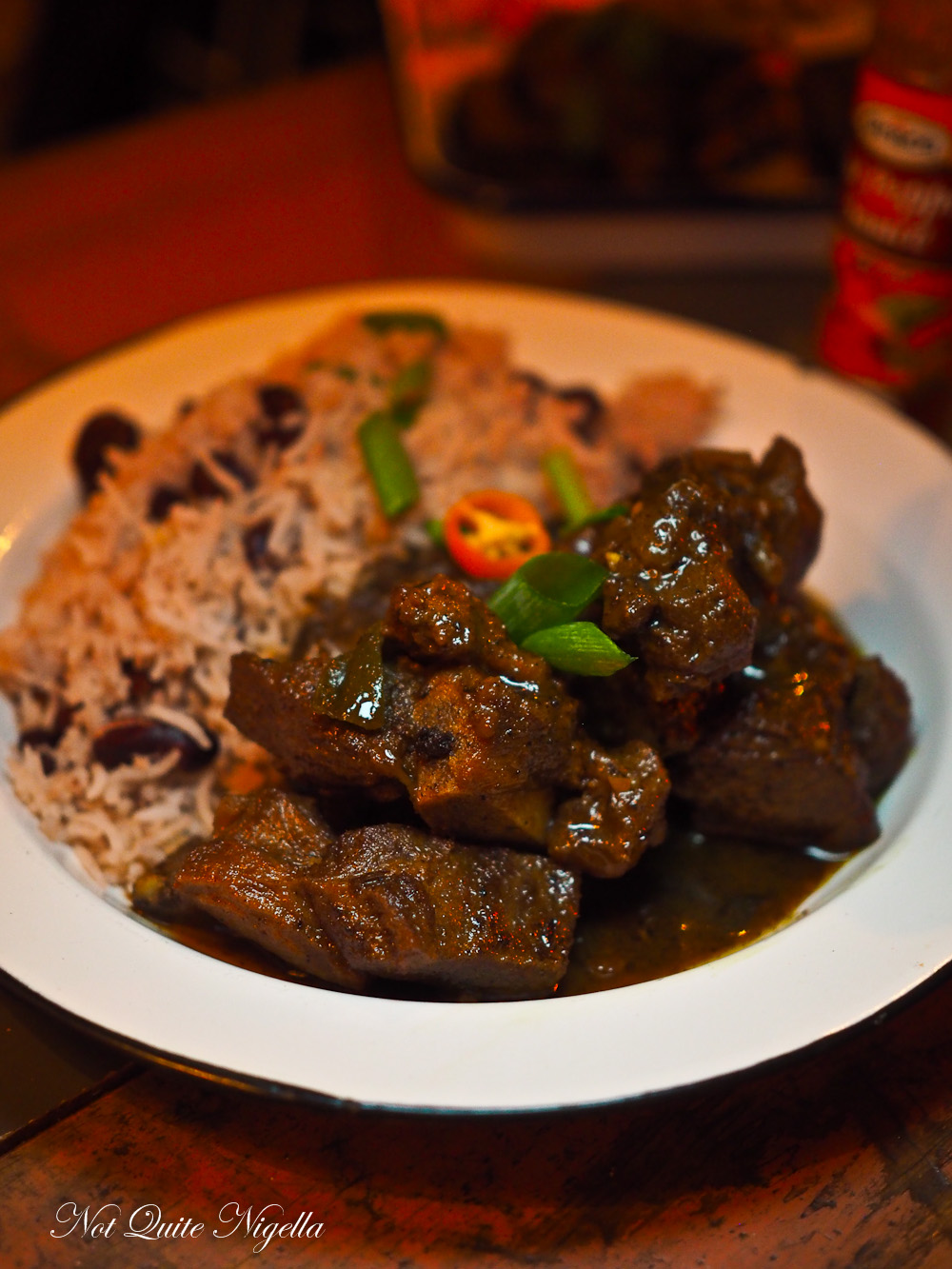 We are sharing two mains and the first is a a curry goat, served one in cooked in a Jamaican curry mix and "Hot Peppa's" with coconut rice and peas (actually kidney beans). I really like the flavours of the sauce although the goat could be a bit softer and mixed with the rice and peas makes for some spicy comfort food. 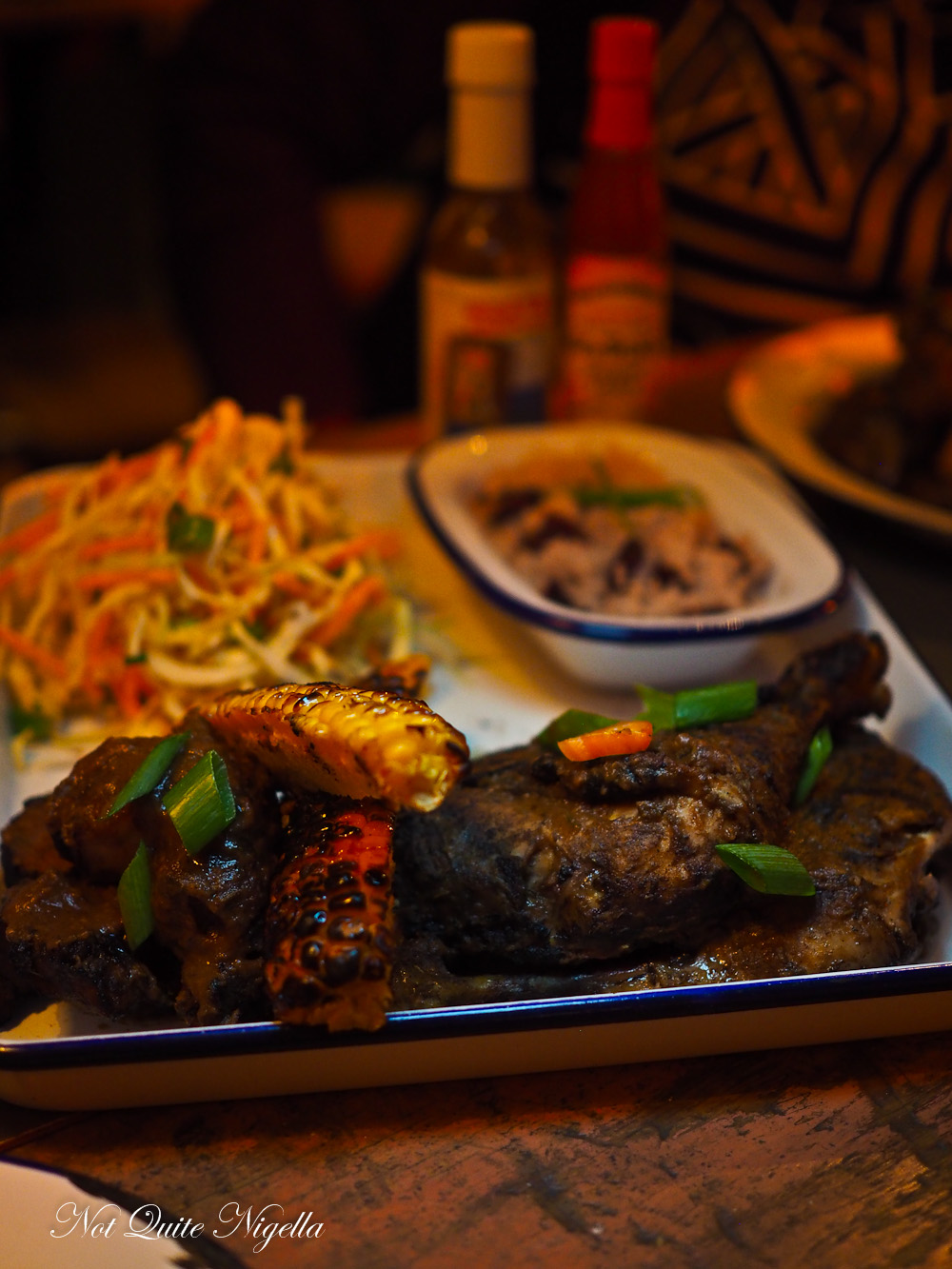 There are two jerk meats on the jerk grill plate: Boston Bay pork jerk and jerk chicken served with rice and peas and house slaw. Both meats are quite different in flavour, the chicken is the classic jerk meat but the pork has a richness that adds to the jerk. I do love the pronounced spiciness of both though. And speaking of chilli, did Mr NQN eat the Scotch Bonnet pepper? He didn't but I did - it's hot but not searingly hot.

There aren't any desserts on the menu so we leave with the dancing of scotch bonnet chillies on our tongue. 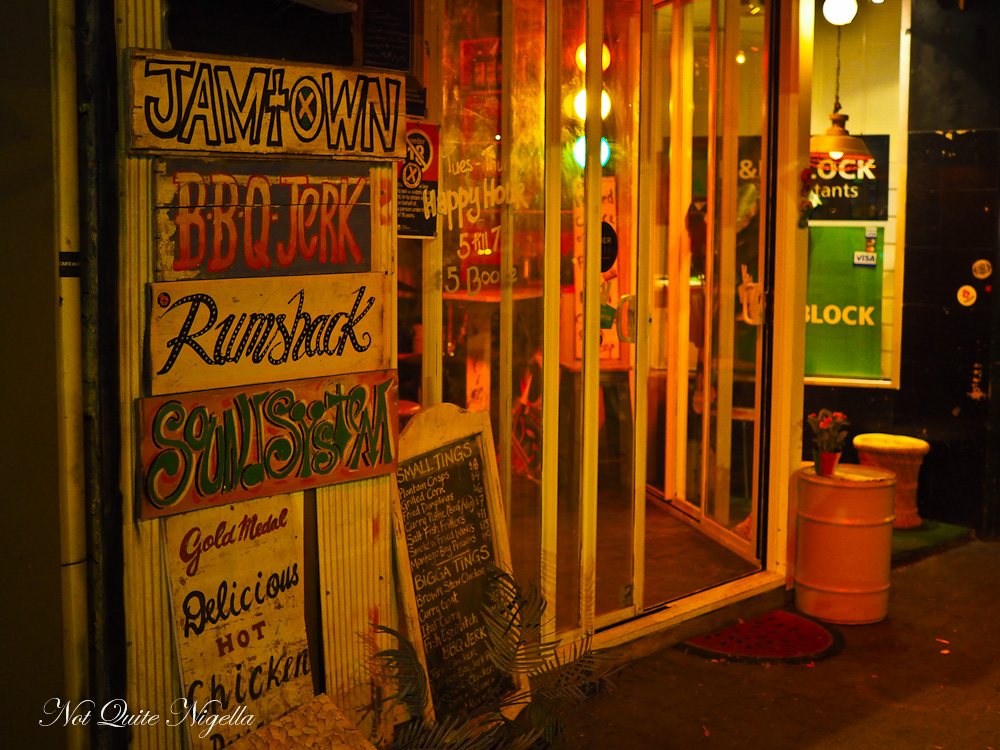