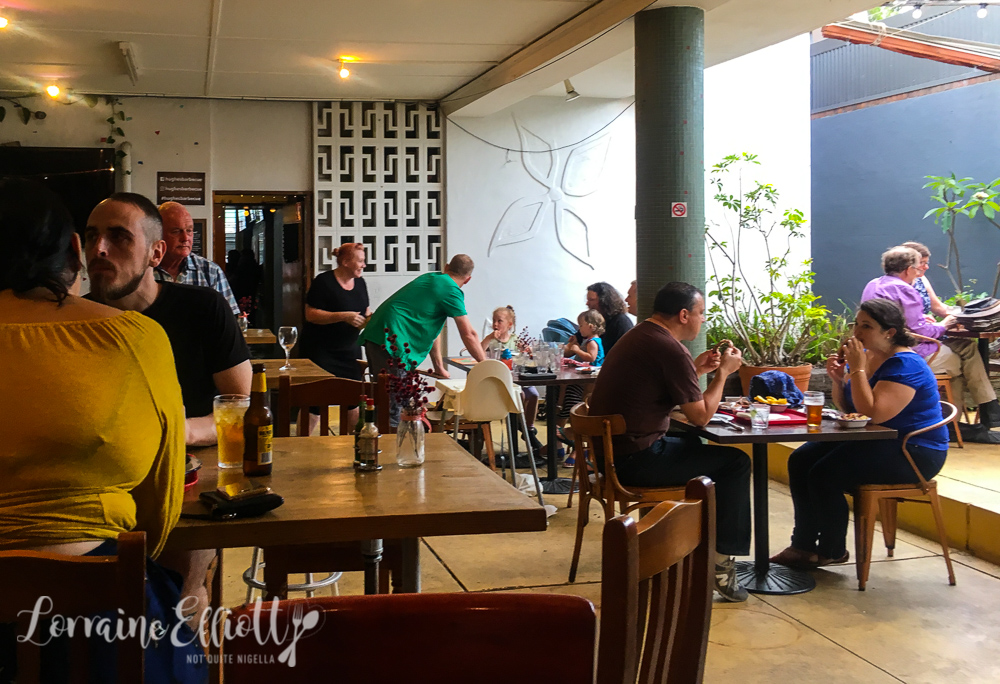 Craving some Texan style barbecue? Does the smell of wood burning smokers whet your appetite? If you love the idea of low and slow cooked meat then Hughes Barbecue in Waterloo might scratch that itch. And psst-there is even a secret menu item! ;)

When our southern friends Ivy and Ryan messaged me over the Christmas break that they'd driven 1.5 hours to have barbecue, I knew who I had to visit Hughes Barbecue with. 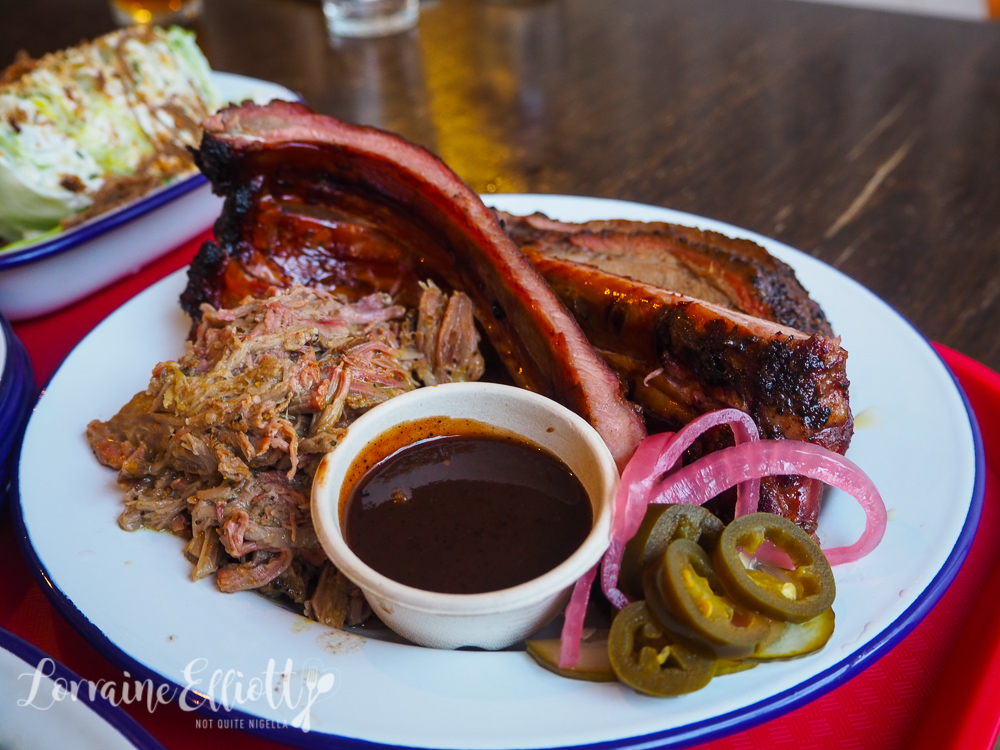 Hughes Barbecue is located at the George Hotel on the corner of Elizabeth and Wellington streets in Waterloo. The pub is quiet but if you walk through and follow your nose you'll be amply rewarded with Southern American barbecue. Owners Anton Hughes and Tanya Lumley are behind the pass and on the floor. We have a booking, something that Tanya is very happy about. You may know Anton from Bovine and Swine in Enmore. A couple of months ago he branched out to start Hughes Barbecue with Tanya. She explains, "Wes and Anton are still great mates, but B&S is a small establishment and only enough room for one boss. Anton has always been willing to push the envelope of low & slow barbecue and embrace Australia's multiculturalism, where the B&S business model was to be strictly Texan inspired. A new opportunity came along and we moved on in! It also presented the opportunity for more logistical positives like table bookings, a full bar, and the ability to utilise a full kitchen in which to get creative with." 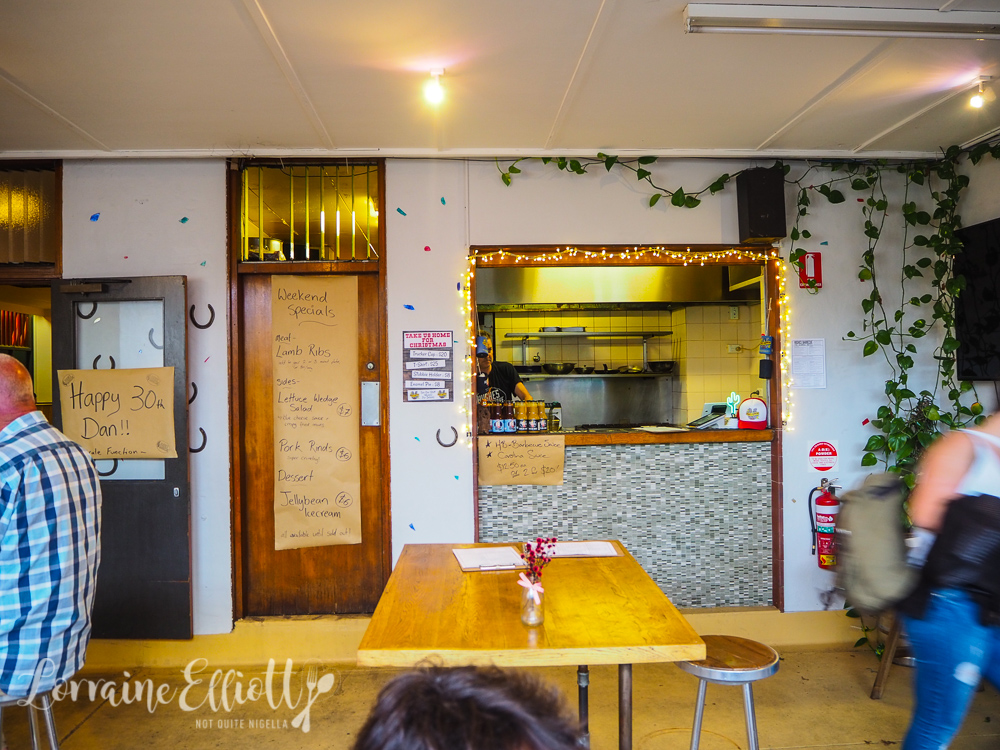 There's an indoor area as well as an partially covered beer garden. I walk in carrying an enormous round miche bread loaf for Ivy and wonder if it's weird to walk into a pub carrying a giant loaf or not (I no longer know about these things). Ivy and Ryan arrive and Ryan immediately goes up to ask if there are any "Burnt ends" (the delicious double cooked point end of the brisket that is like bbq treasure). The answer is no but they explain that with advanced notice they can have some. We place our order at the counter and take a buzzer to the table. 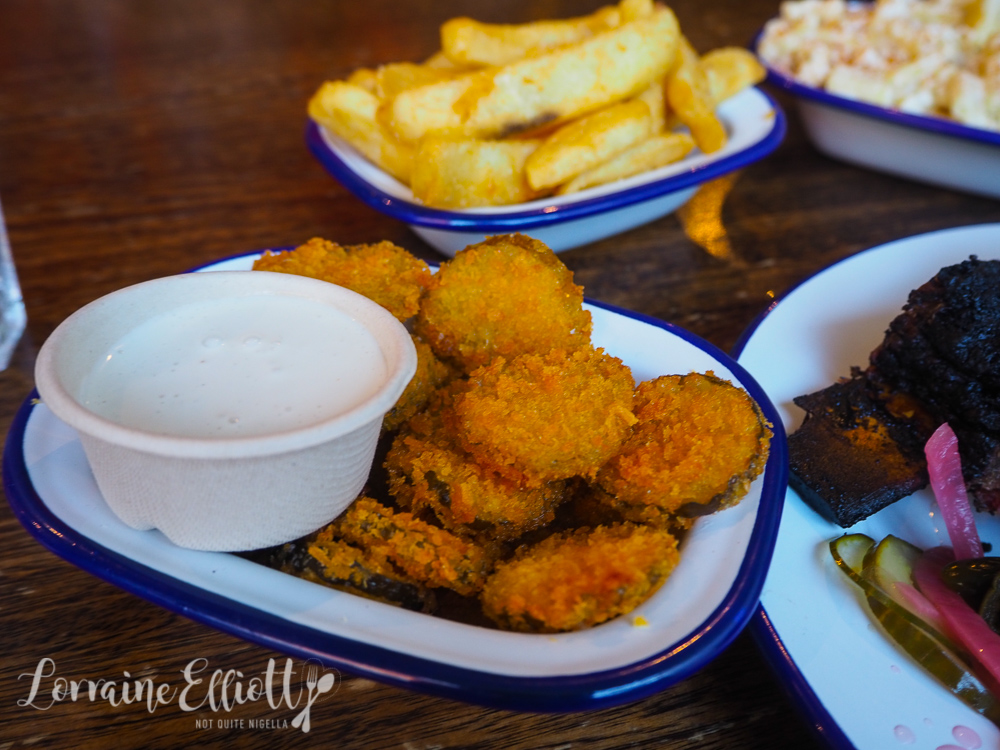 Our buzzer sounds and we pick up our trays of food and there is cutlery and napkins and sauce to the side. The fried pickles get both Ivy and Ryan's tick of approval. While we sometimes get whole deep fried pickles, this is the way they're used to getting them in American sliced up with breading and a gorgeous blue cheese sauce (seriously, we all loved this blue cheese sauce!). 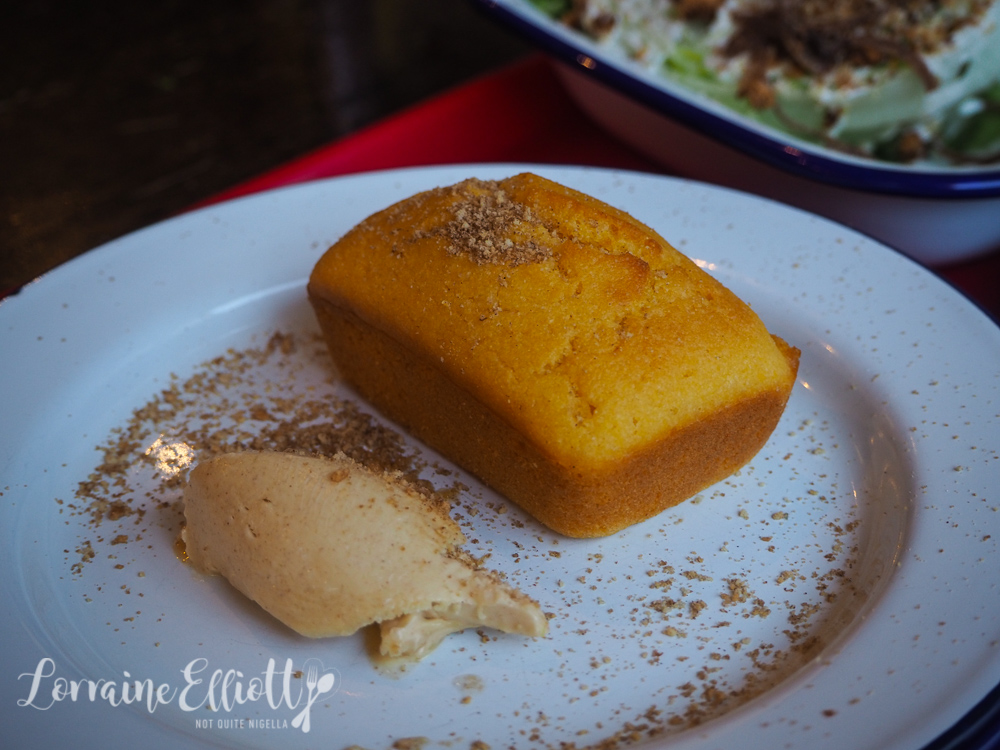 I always measure all cornbread against Ivy's corn bread because it is super moist and really the best I've had. This isn't quite as moist as hers but it's good with a sprinkle of cinnamon sugar, sweetened with maple syrup and cinnamon butter on the side (an idea that Ivy loves). 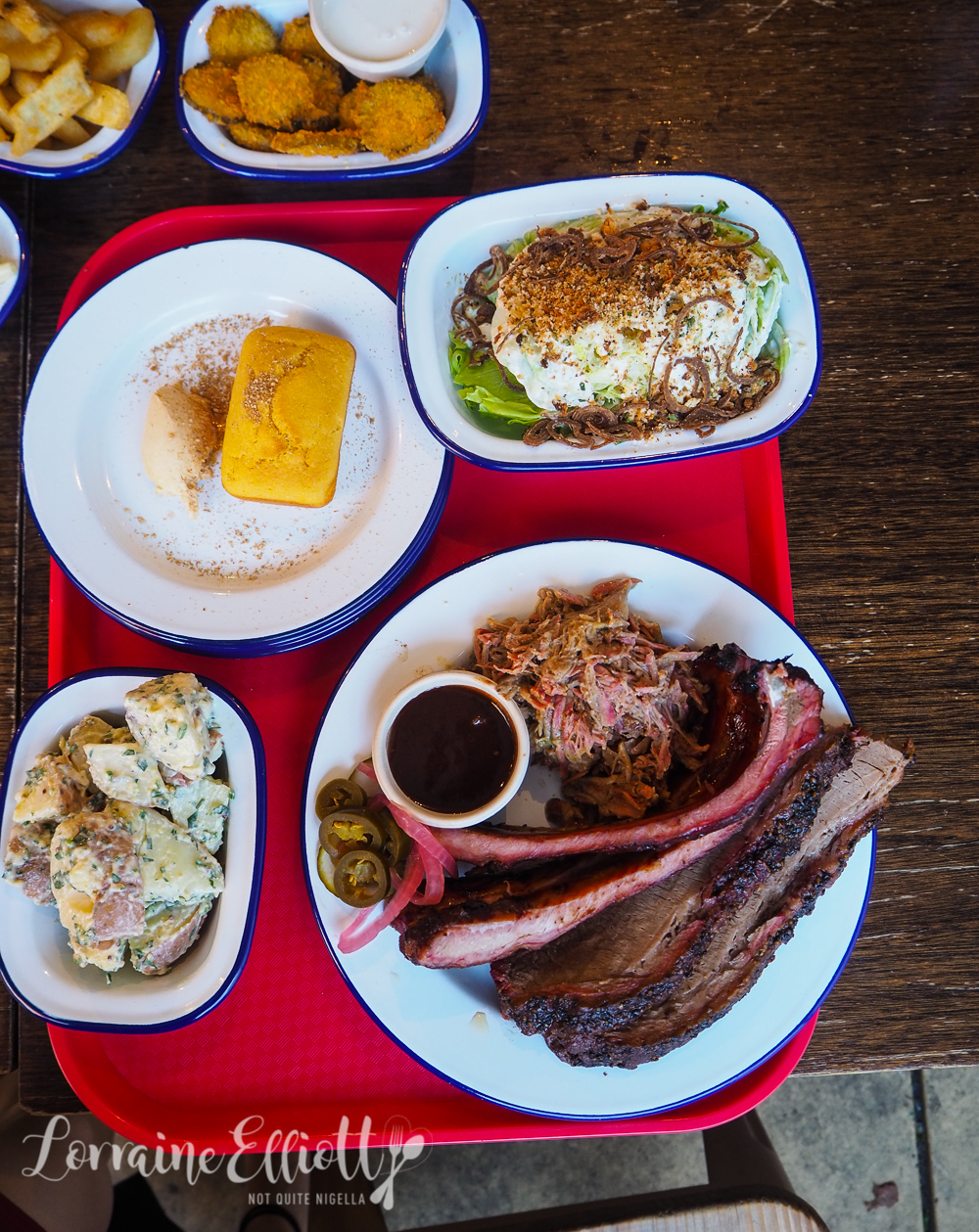 We decided to share two of the large plates. First there is three meat plate with your choice of three types of meat and two sides. This allows us to try the 12 hour smoked brisket, the chopped pork with Carolina mustard and the pork ribs with root beer glaze. We're all big fans of the beef brisket which is tender and melts in the mouth. The ribs have a nice sweetness to them from the root beer glaze while the chopped pork with Carolina mustard and vinegar sauce is another favourite. Often I find pulled pork quite dry but this Carolina based chopped pork is luscious. 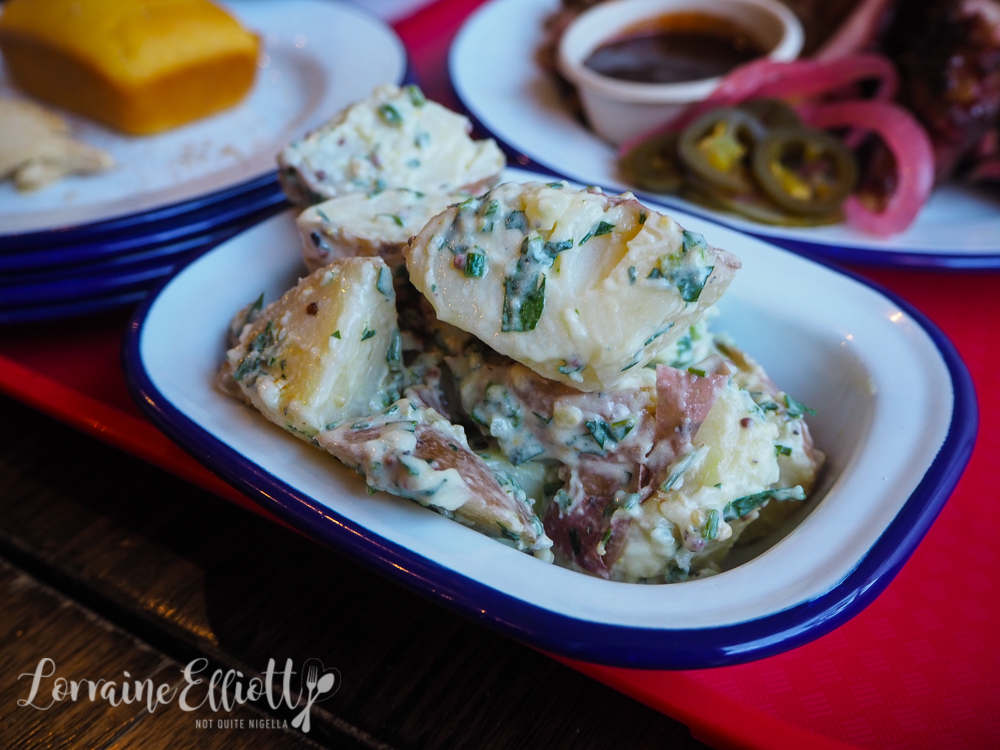 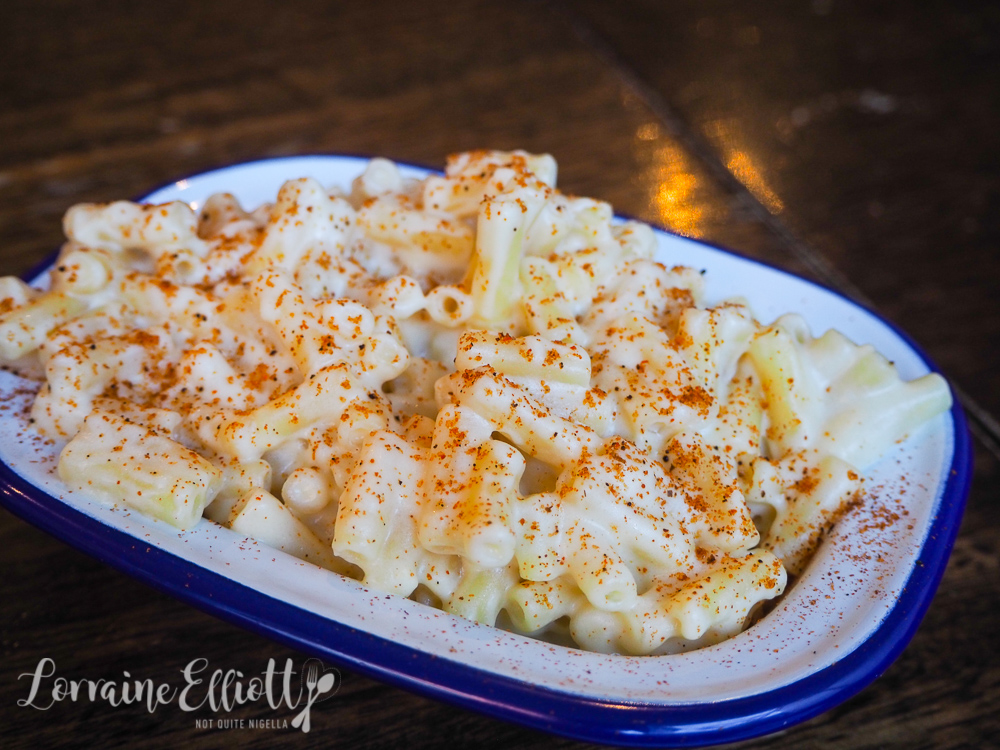 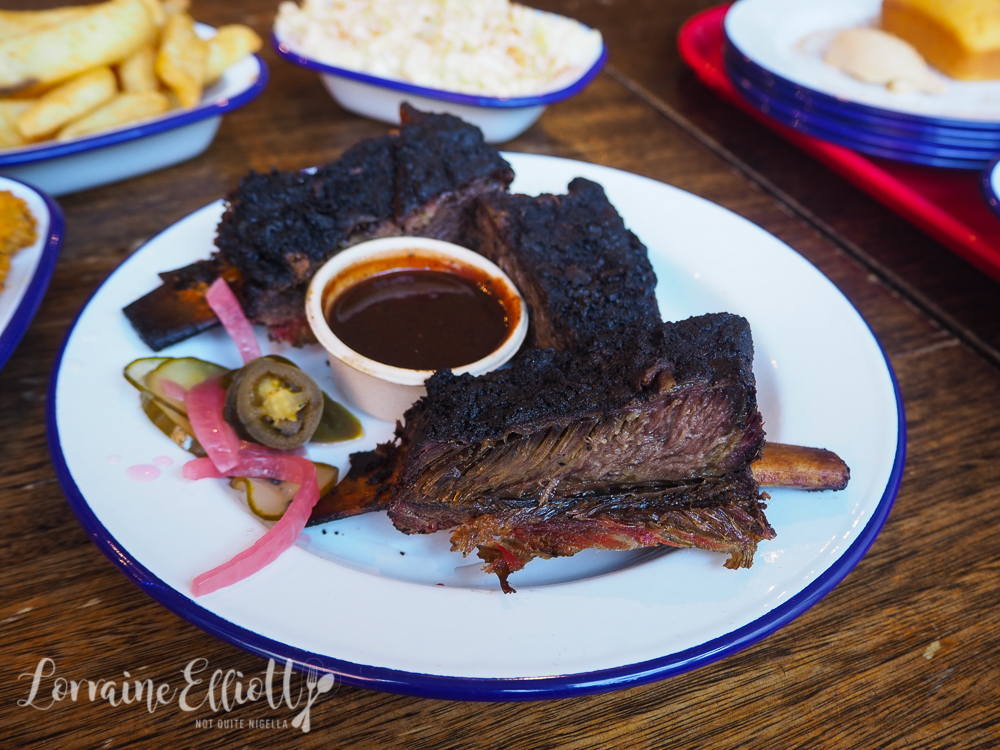 Beef short rib plate (comes with one side) $40

The beef short ribs are quite dry. I think we expected fall off the bone meat but alas that was not to be. We get a side of the steak cut fries that are freshly cooked and crispy and I dip this in the blue cheese sauce from the pickles. 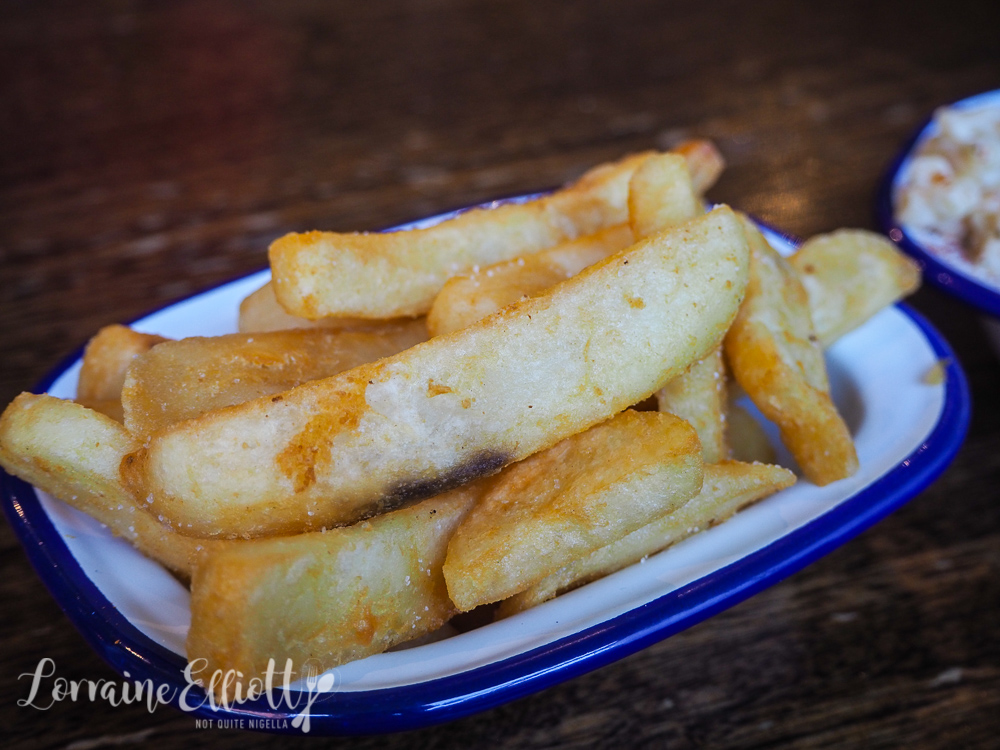 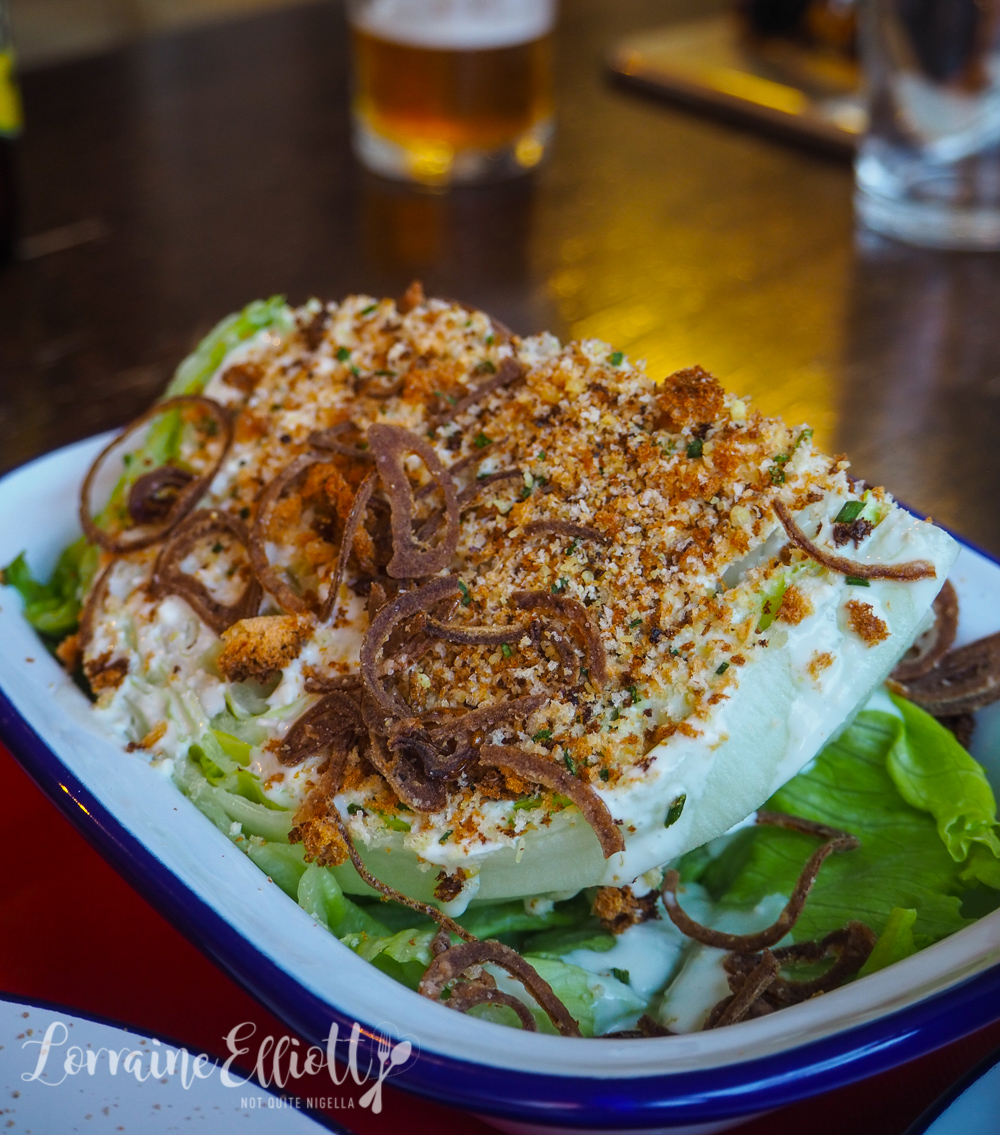 As soon as Ivy saw that the wedge salad was on the specials board she wanted to order it. I am one of those freaks that happens to absolutely love salad so I was happy with this, plus with all of the meat, you do need vegetables beyond fries. This is an awesome wedge salad, with a good dispersal of blue cheese dressing, crispy fried onions and seasonings. Between Ivy and I, we polished this baby off. 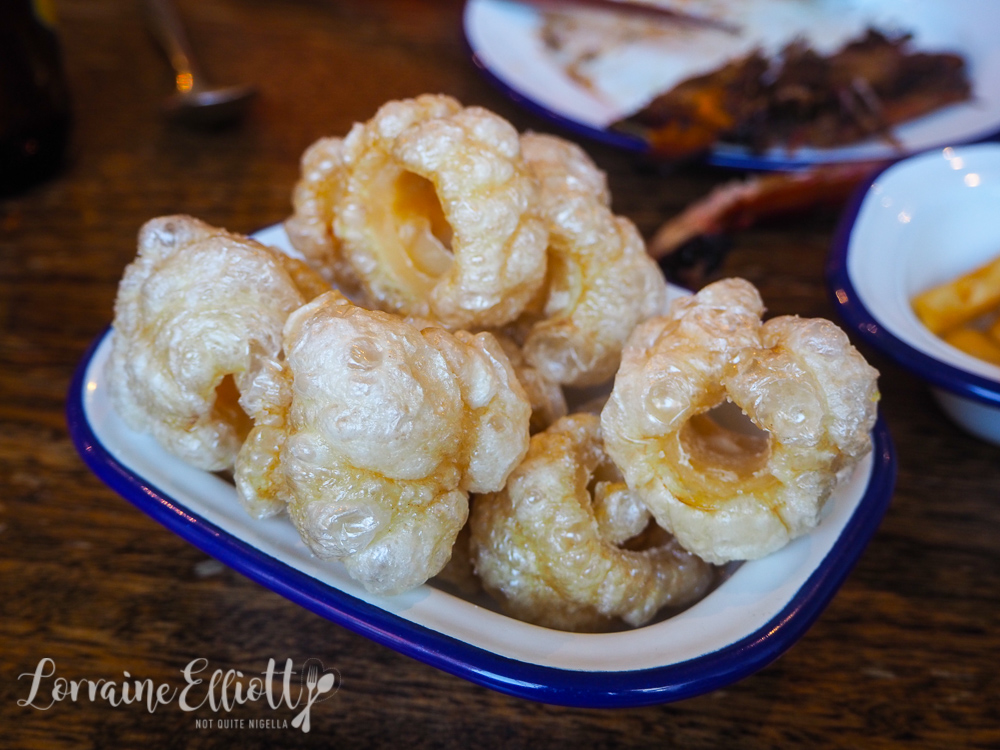 Ivy loves pork rinds but she is a genuine southerner unlike Ryan who confesses to us that he was actually born in Connecticut. "Yankee swine!" I say in my best faux Southern belle accent. No I wasn't drunk, I'm just inappropriate at times. 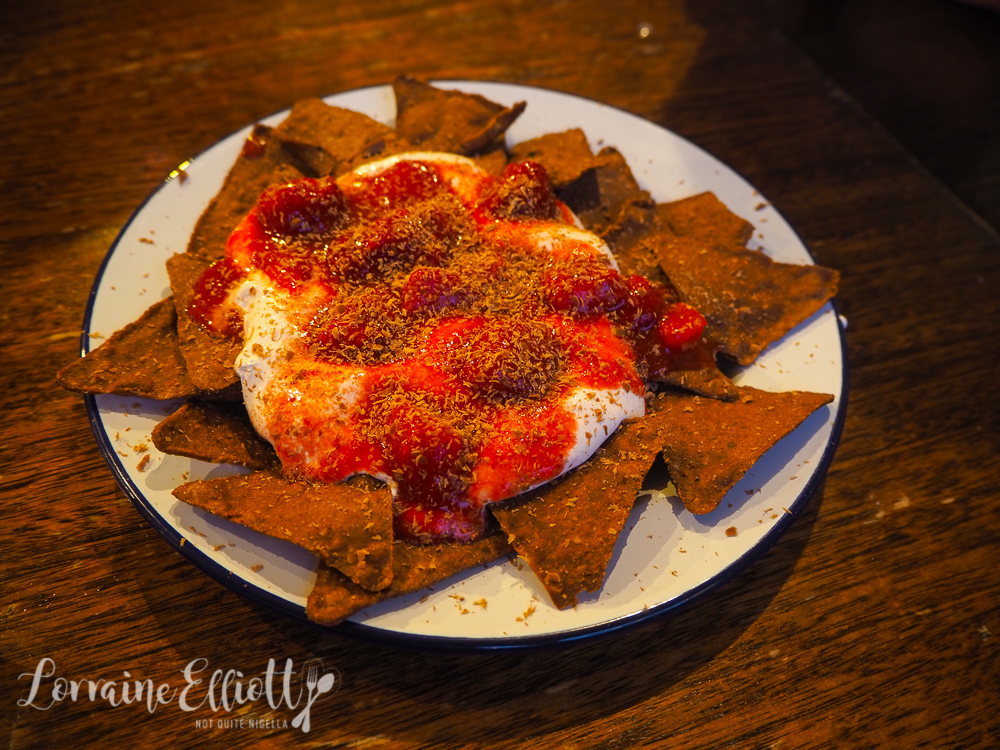 A little later we become curious for dessert. Sure there is the jelly bean ice cream which is literally ice cream with jelly beans but did you know that there's a secret menu item like In-N-Out's secret menu! If you ask nicely you can have their chocolate and strawberry nachos! Yes it's exactly like it sounds and it starts with chocolate and cinnamon corn chips that Tanya tells us are hand made for them in Sydney. This is covered in marshmallow fluff and then strawberry sauce. The corn chips are super interesting as they're made of corn so it has that slight savoury element but then there's the cocoa and cinnamon. I think I would have loved this with a cheesecake filling instead of marshmallow fluff but I am not a huge fluff fan (sorry!) but the strawberry sauce with chunks of real strawberries is a hit. Yes ma'am.

So tell me Dear Reader, do you always make bookings? Do you think it's odd to walk into a pub with a giant loaf of bread? And do you like secret menu items?