The Incredible Snickers Galaxy Layer Cake {That Also Happens To Be Vegan!} 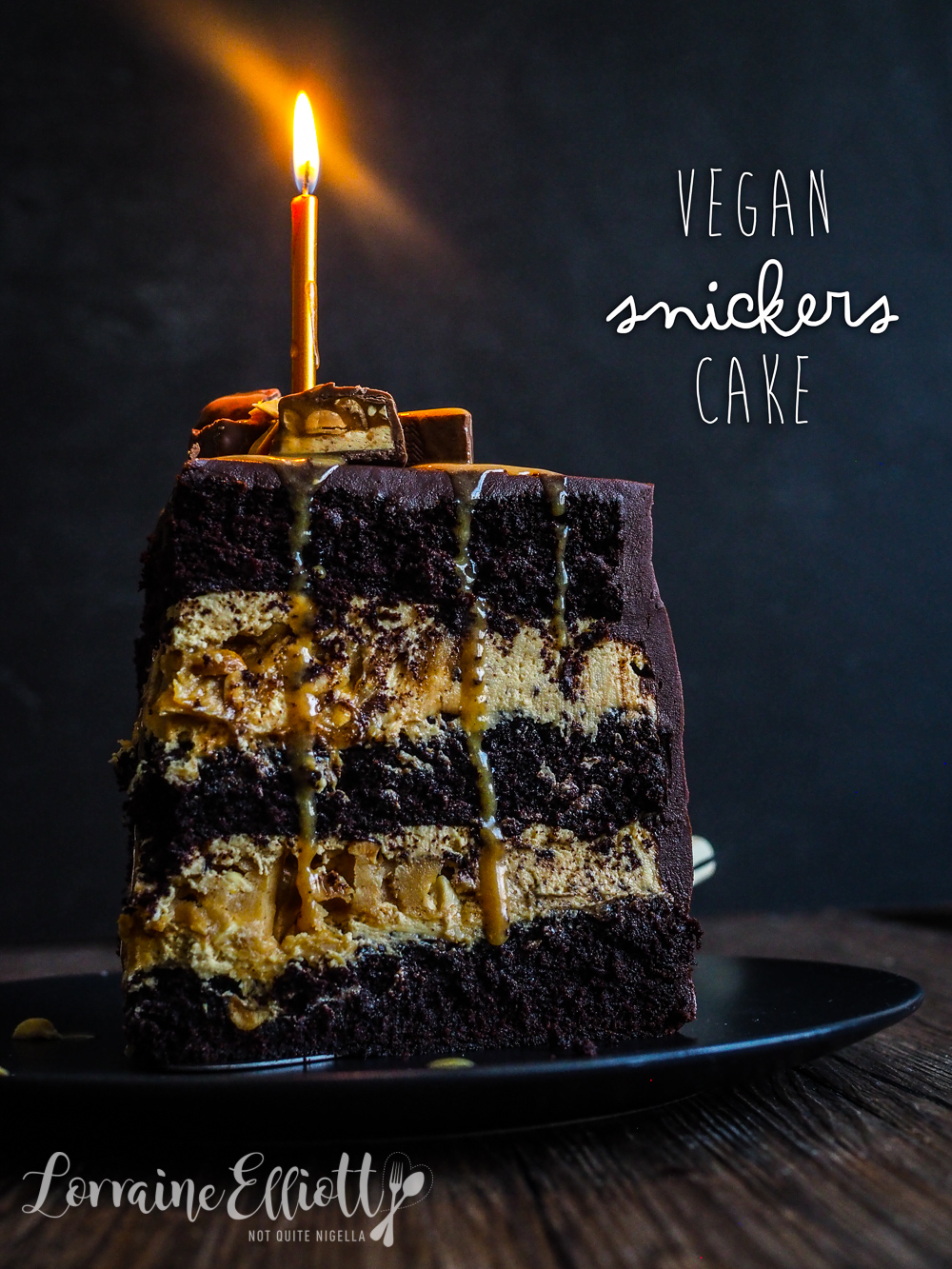 Dear Reader, if you're a Snickers fan or just a fan of rich chocolate cake, peanuts, caramel and peanut butter then this cake is for you (and if you are vegan then all the better). Three layers of rich vegan chocolate cake are sandwiched with peanut butter buttercream that hides a surprise layer of easy, vegan peanut butter caramel and chopped, roasted peanuts. The whole cake is then coated in a rich coconut dark chocolate ganache and given the cosmic gold treatment! Dear Reader, this is actually one of the my favourite cakes that I've EVER made so this is definitely a pushy recipe! I called her Luna. 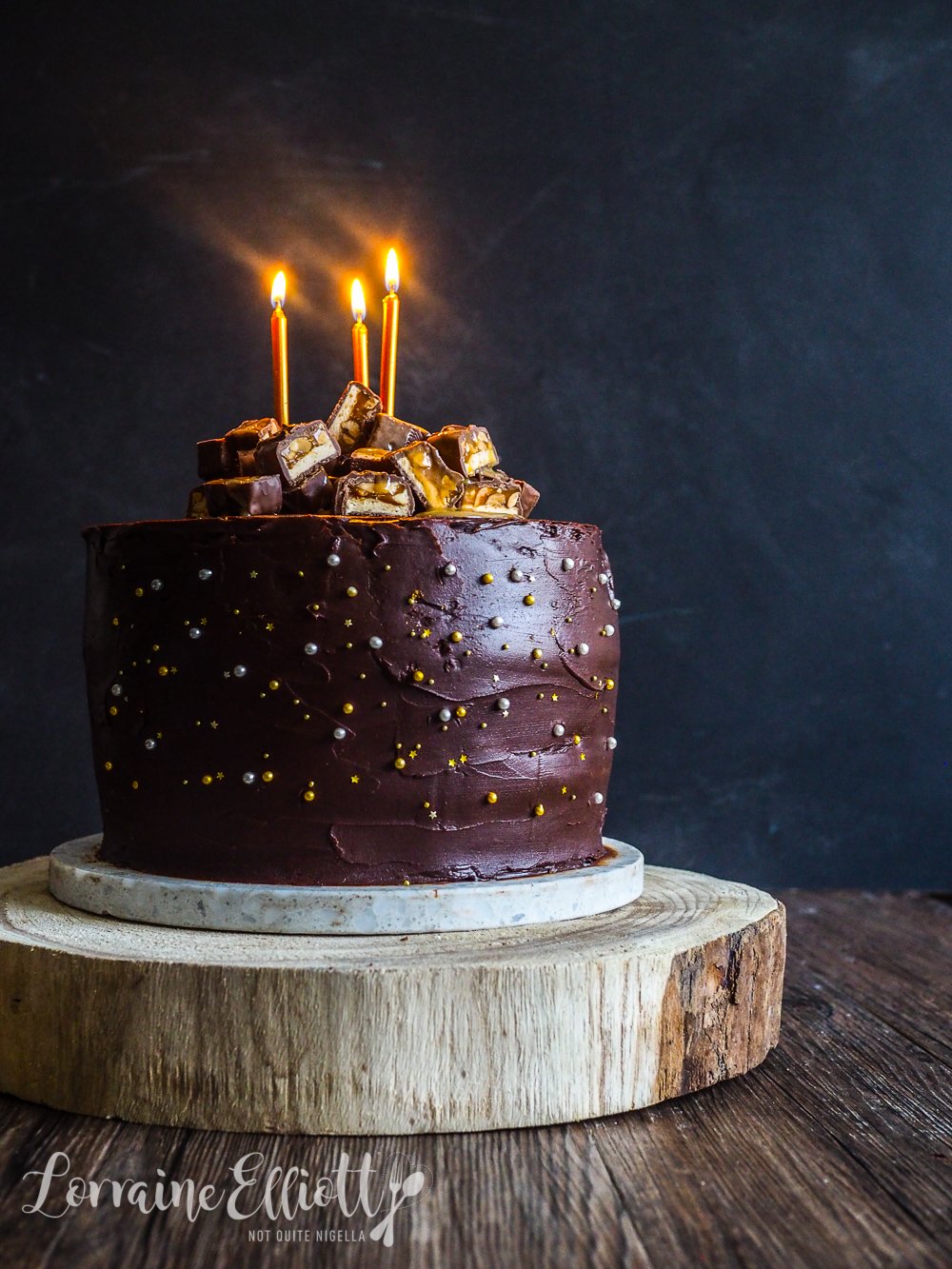 I'm not going to lie to you my Dear Reader, this cake is a bit of an effort. It requires four components plus decorating time but the components are easy and certainly easier or no harder than a non vegan version. Take the vegan peanut butter caramel (which you should just make if you're not vegan because it literally takes 1 minute to make and you will not burn yourself). It's so good that after mixing this up, I keep a jar in my fridge all the time now to snack from. Don't judge me please. 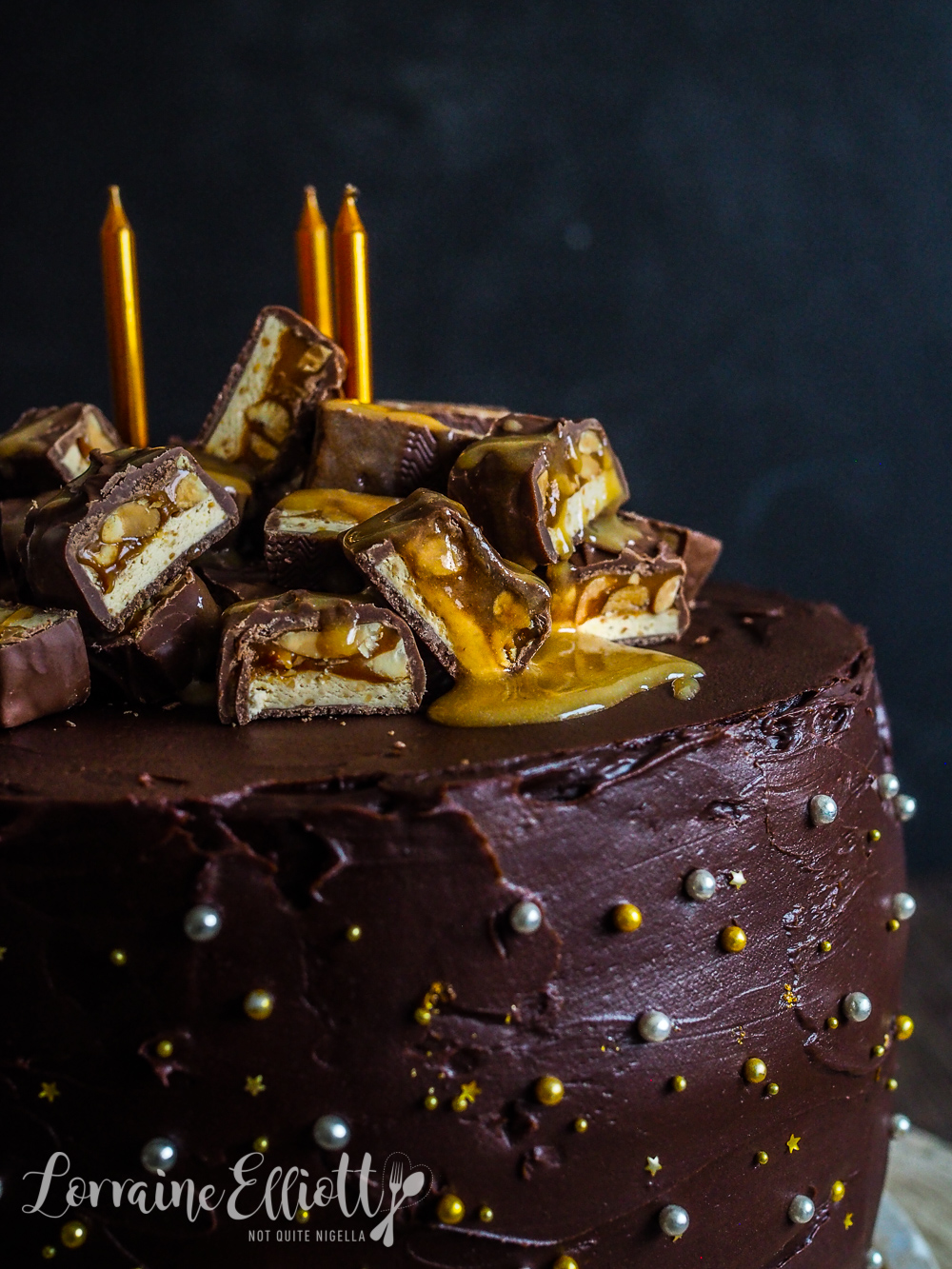 I made this cake for a very recent Elliott family birthday. It was Mr NQN's sister Amaya's birthday and his father Roger's. We had another birthday celebration earlier on in the day that we had already accepted an invite to so we had to miss out on the bowling and picnic but the celebrations continued on to Tuulikki, Mr NQN's mother's house later that evening. 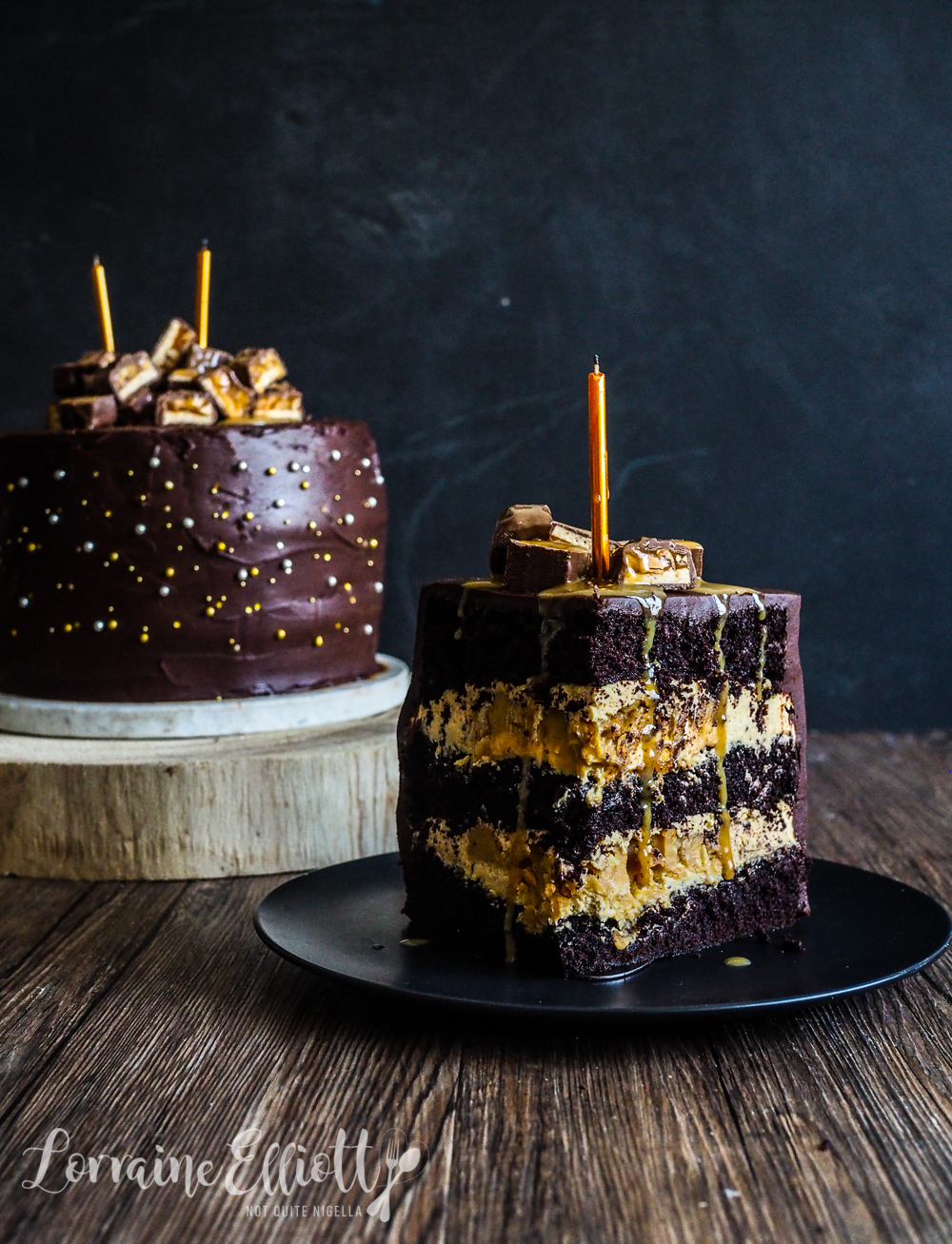 I sometimes forget how different the Elliotts are to my family. There's children, chaos, dancing and music at every gathering. My family will literally eat in air conditioned comfort in a nice restaurant and that's their idea of fun. And to be honest, I'm a bit more comfortable with the latter although I do find an Elliott gathering fun. 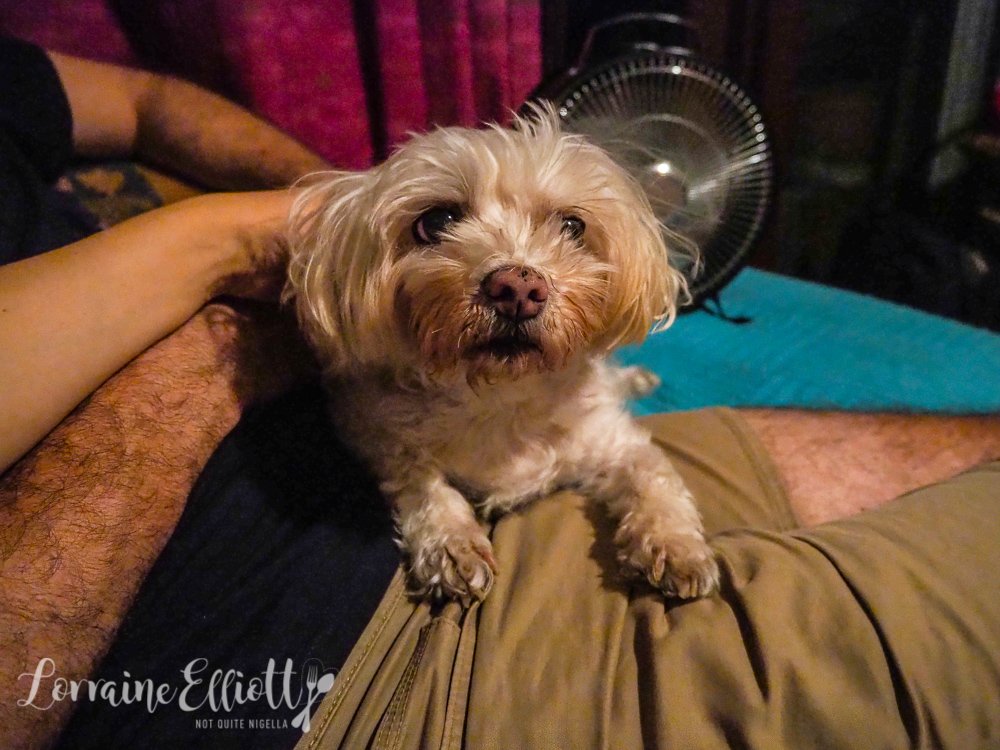 As soon as we arrived five year old Jett and seven year old Aura showered me with their books bringing me item after item to show me. For dinner there were pots of lentil stew, potato curry and sauteed kale all served on the blue and purple lily pad home made plates crafted by his mum Tuulikki. Seeing Mochi, she warned us about house bound spirits in Mochi's water and how we had to make sure that she was given water in a bowl outside to ensure that it didn't have the indoor house spirits. I never quite got to the bottom of that I'm afraid. 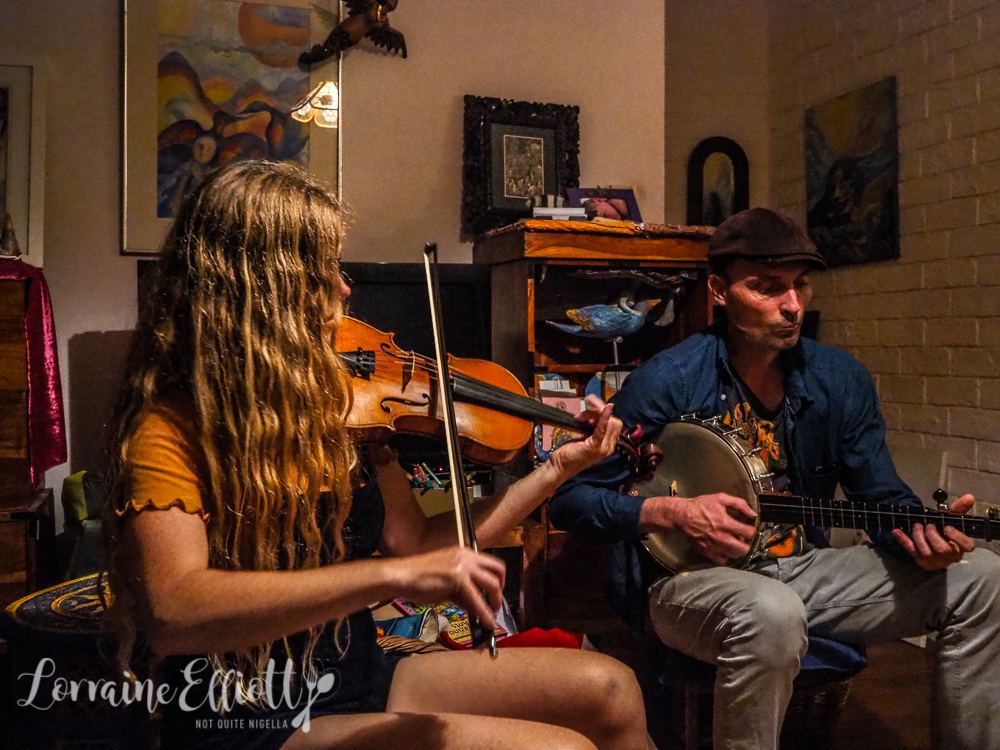 I put up a whole lot of videos on Instagram stories and the questions came thick and fast from readers - why was Tuulikki's cupboards multi coloured? Answer: because she is an artist and she lives in fairyland. Are they for real? Answer: yep they sure are. But mostly people loved the Appalachin music that Mr NQN's other sister Araluen and her boyfriend Harry played and the energetic dancing. 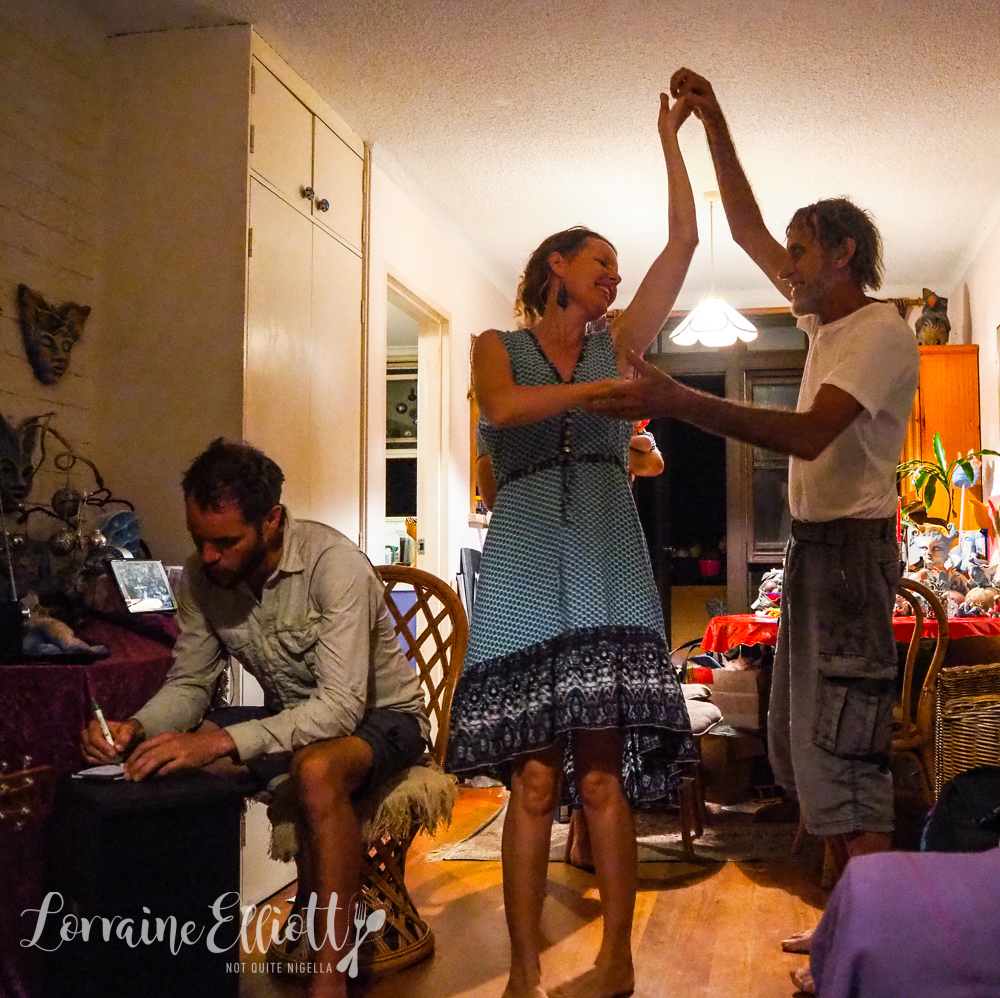 It came for time for this vegan Snickers cake after the musical interlude. Tuulikki was of course horrified that there was cake (she is absolutely terrified of cake, I've never seen anything quite like it) but it was vegan so there was no excuse not to try it. It's really a cake to feed 20, not a group of 10 but that meant there was plenty for everyone. Roger ate two pieces before lecturing me about veganism being the future and how I should have made it also gluten free (I could have done without this). 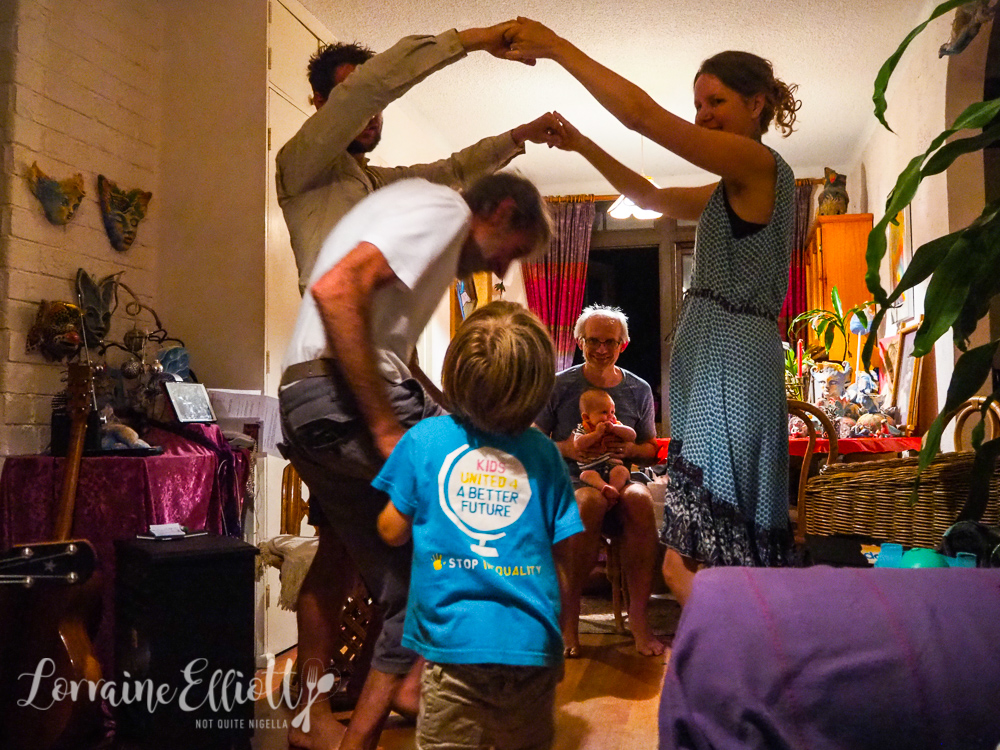 After dessert, Amaya's ukelele came out and we sang some songs. Well most of us sang, Roger bellowed his lungs out occasionally losing track of where he was singing. At 10pm it was time to go. "Won't you take the cake with you?" said Tuulikki, her bespectacled eyes wide with fear of being left with the cake. 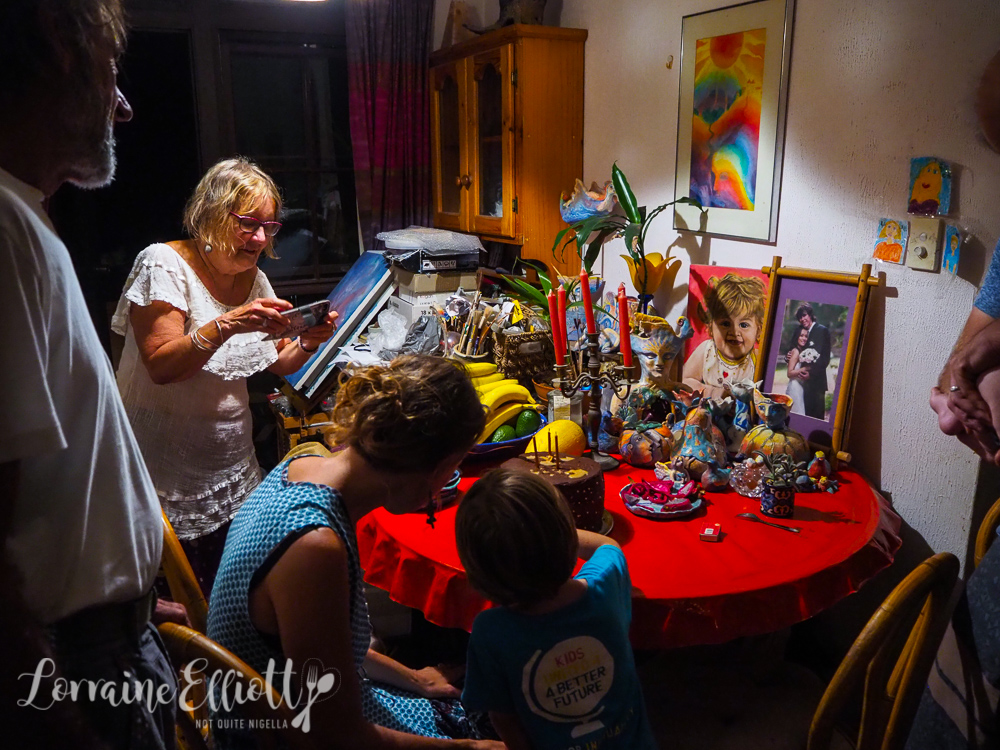 I told her that it was Amaya and Roger's birthday cake so they could take it with them. She cut it up for them before closing her eyes and licking the chocolate and peanut butter off her fingers. Yes it's that kind of cake, one that comes with a warning...you won't be able to help yourself around it.

So tell me Dear Reader, do you ever eat vegan food? Are you scared of cake or do you know anyone scared of cake? Do you like Snickers bars or the flavours of a Snickers? 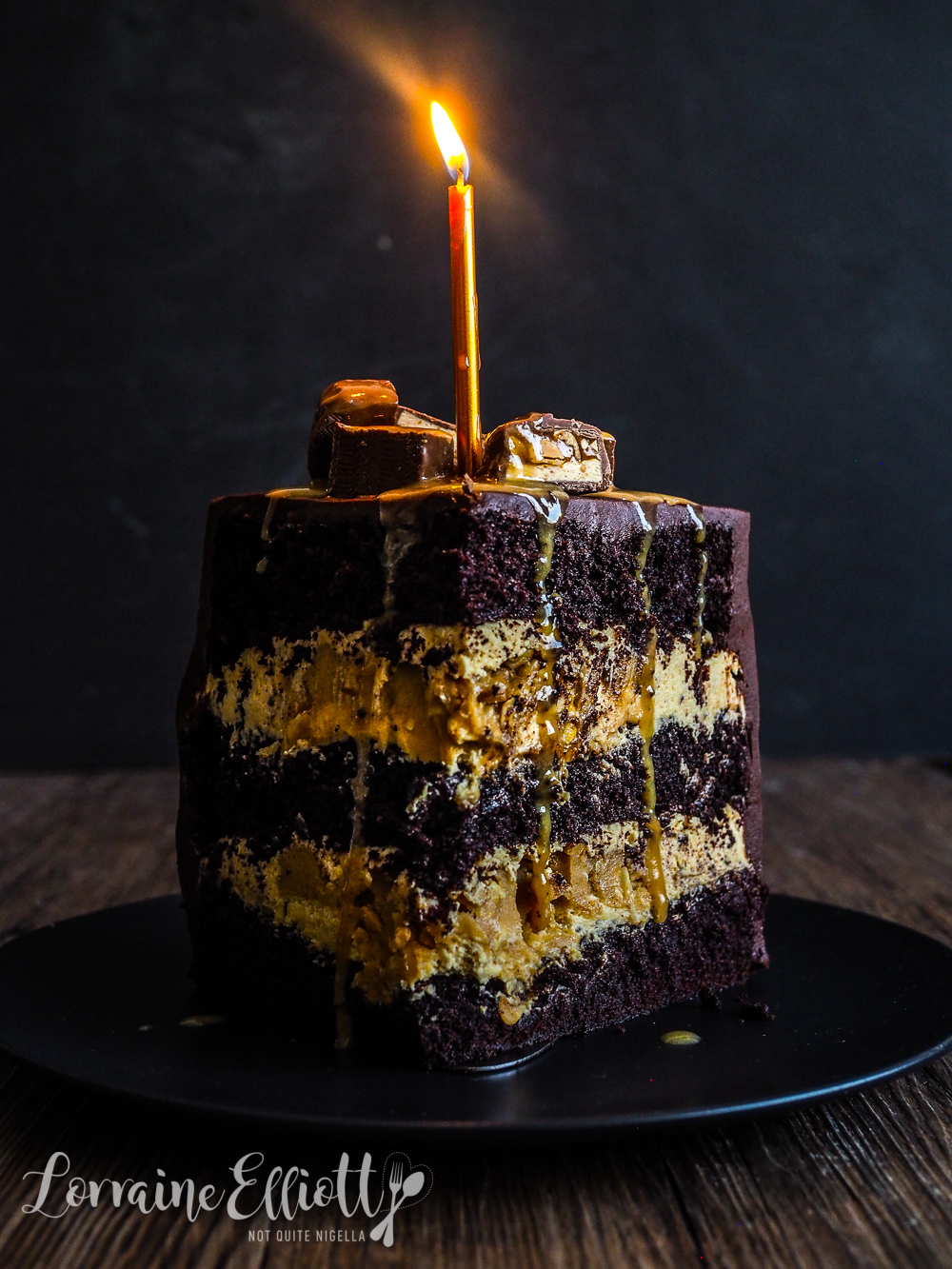 The Incredible Snickers Layer Cake {That Also Happens To Be Vegan!}

For the chocolate cake

For the peanut butter caramel

For the peanut buttercream

For the chocolate ganache

Step 1 - First make the chocolate cake. Preheat oven to 180C/350F and line 3x20cm/8inch round tins on the base and sides. In a very large bowl (the largest you have), whisk the cake flour, brown sugar, cocoa powder and bicarb until evenly distributed. 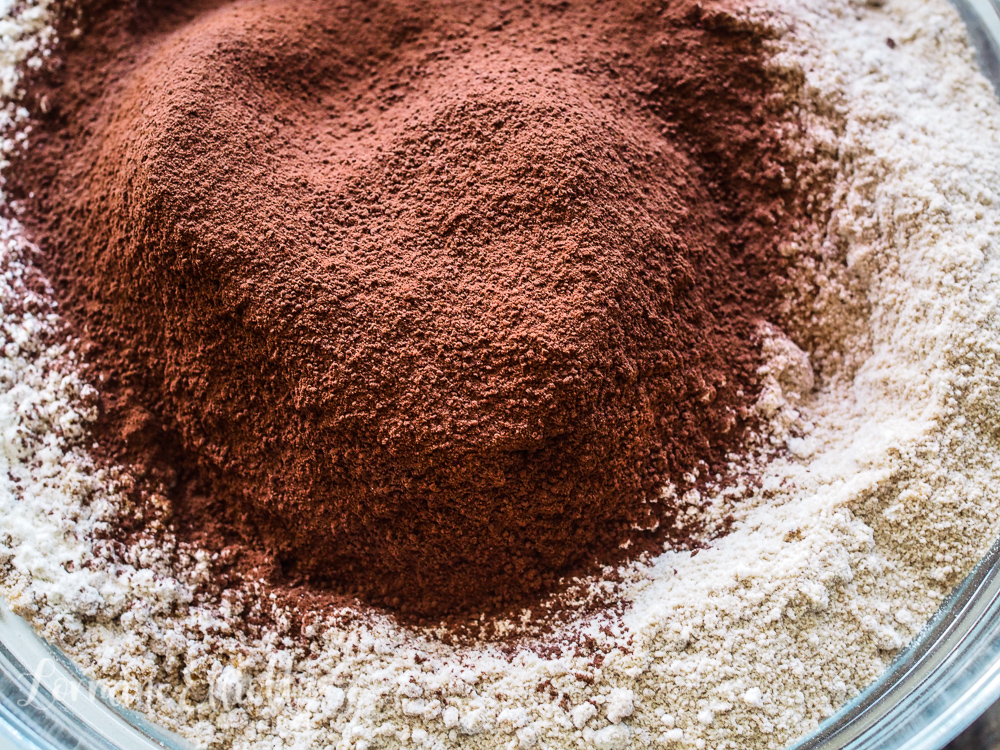 Step 2 - In a large jug measure the water, oil, vinegar and vanilla and whisk together. Make a well in the dry ingredients and mix in the liquid and chopped chocolate until just combined. Do not overmix. Bake for 35-40 minutes or until the centre springs back to the touch. Cool completely - you can make these the day before, cool and just wrap these well to prevent drying out. 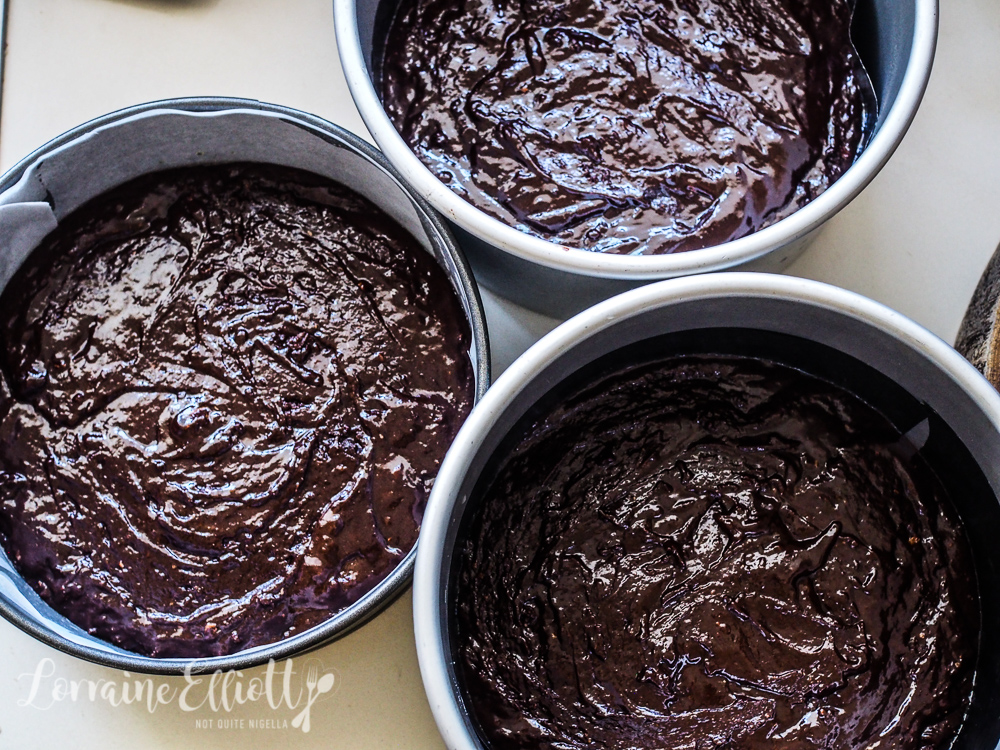 Step 3 - Make the peanut butter caramel. Melt the coconut oil in a jug or bowl and add in the maple syrup and peanut butter. Use a stick/immersion blender and blend until thick. As this cools, it will thicken and if you keep it in the fridge it sets quite firm. Set aside at room temperature. 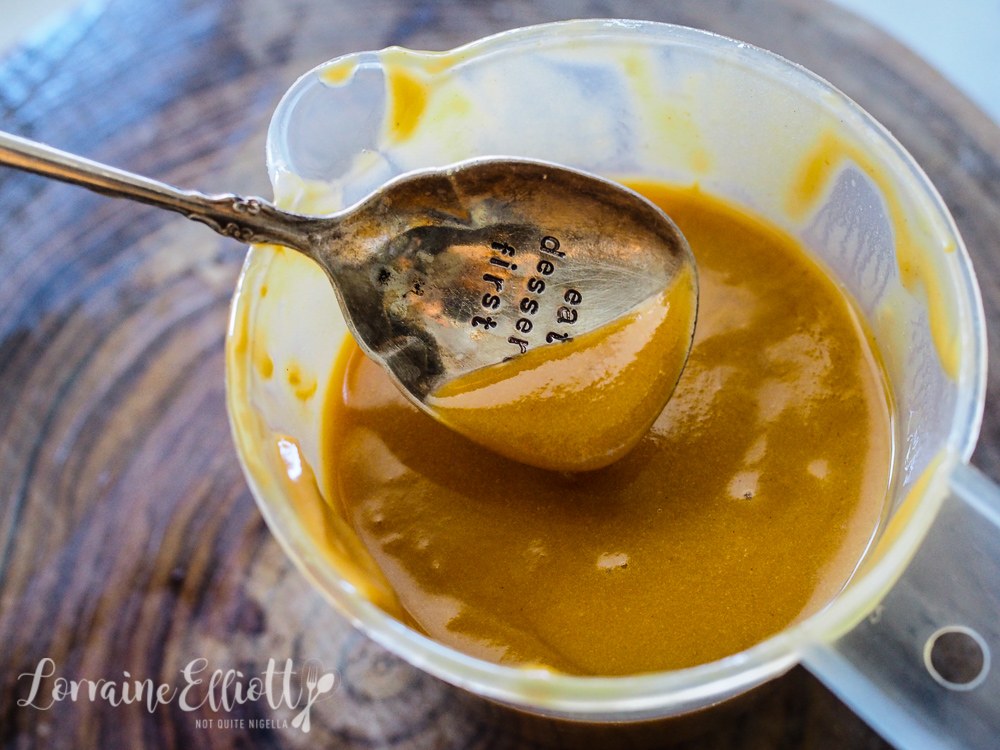 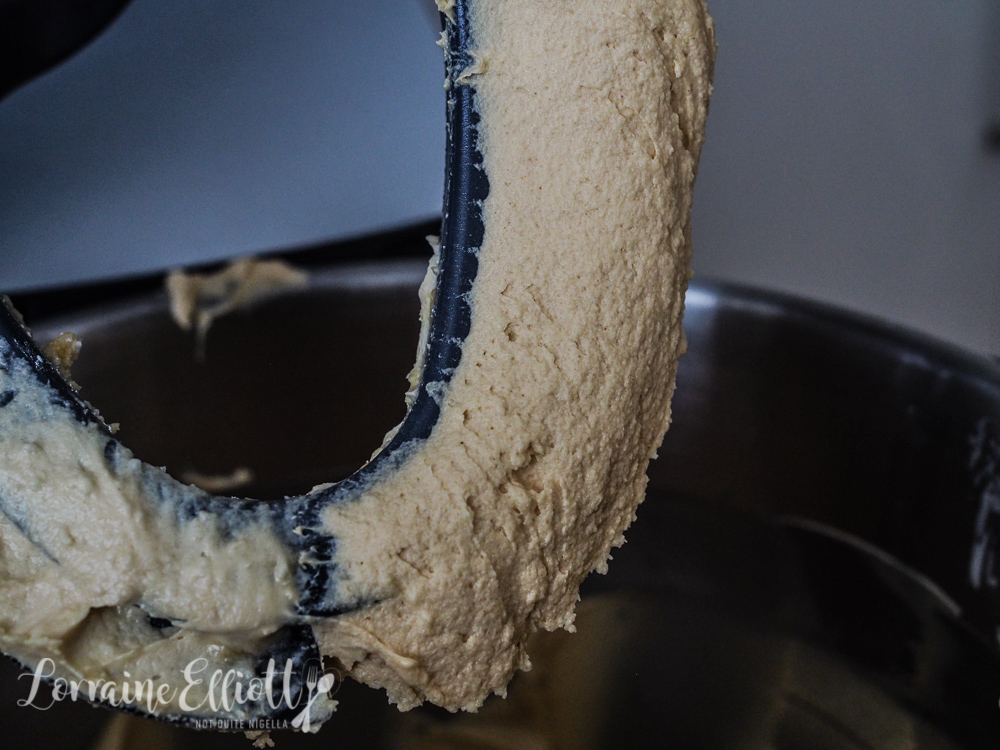 Step 5 - Start assembling the cake. Trim off the edges to make it flat and place it on a serving plate. Spread some of the peanut buttercream on the base and then add some to a piping bag and pipe around the edge to create a little edge. Spoon the peanut butter caramel into the centre and sprinkle with half of the peanuts. Place in the freezer to set. Then spread some more peanut buttercream on top of this to seal off the layer. Repeat with the other cake and end on a single cake layer. Place the whole cake in the fridge to set the caramel. 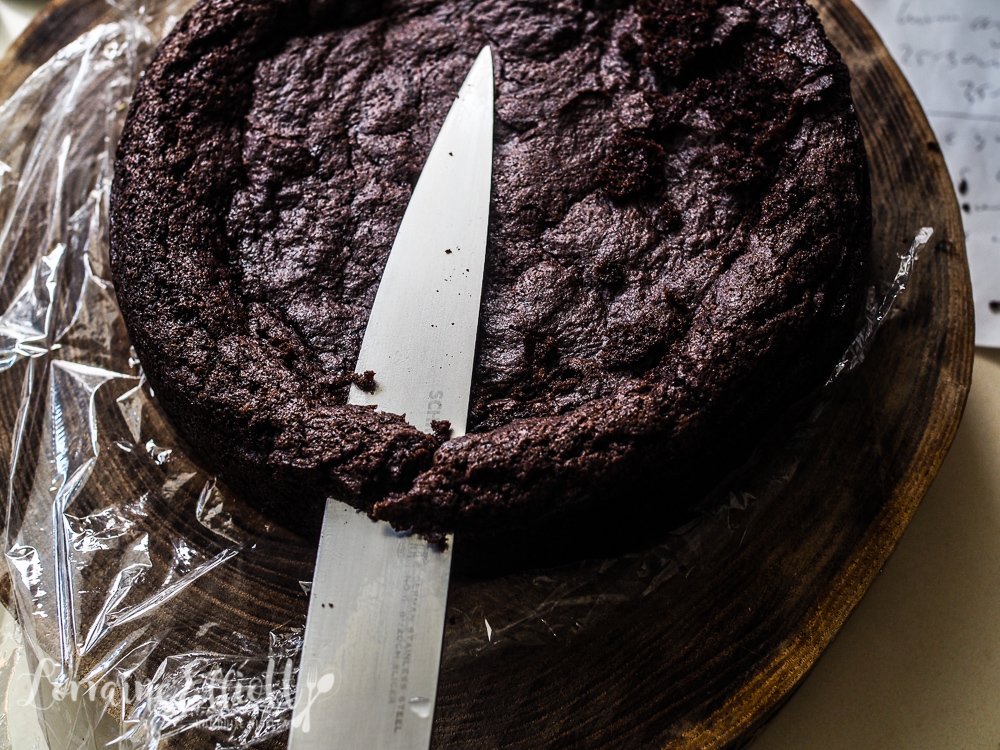 Trimming off the edges from the cake

Step 6 - Place the dark chocolate for the ganache in a large bowl. Heat the coconut cream until almost boiling and then pour over the chocolate and stir to melt all the chocolate. Add in the sifted icing sugar. It should be spreadable and not too runny. Spread around the cake on the top and sides. I did this in two layers and refrigerated the cake for 15 minutes between layers. Use a large scraper to smooth the sides. 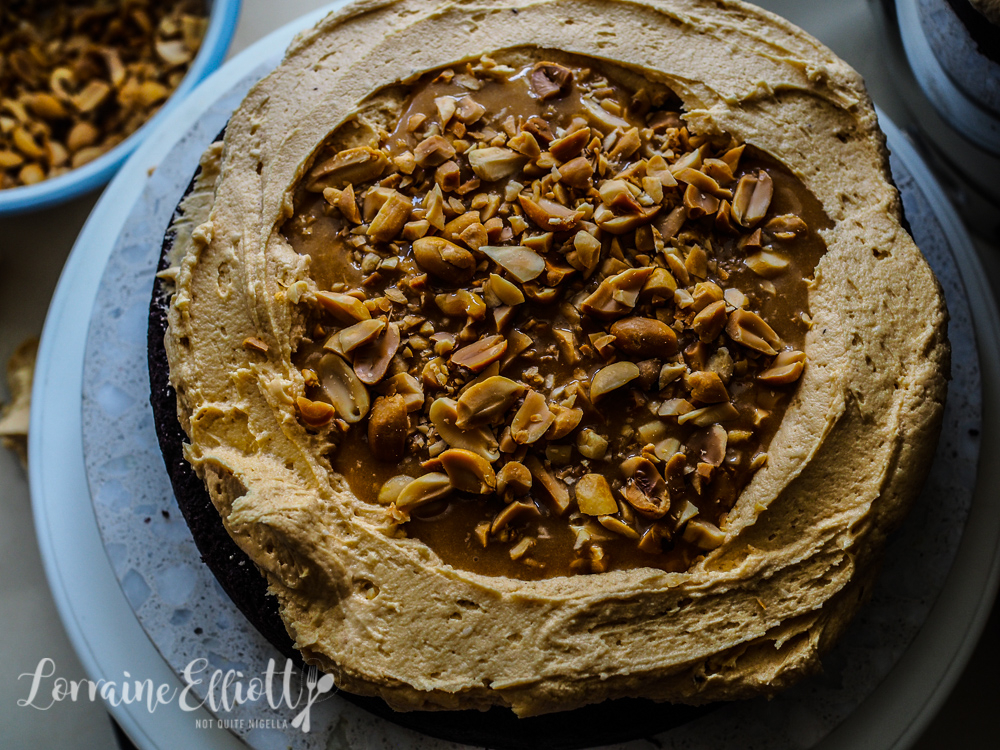 Step 7 - Decorate the cake with sprinkles - I used a paintbrush to apply the very small balls. I also topped it with actual Snickers which aren't vegan but you could probably find a vegan version of these. 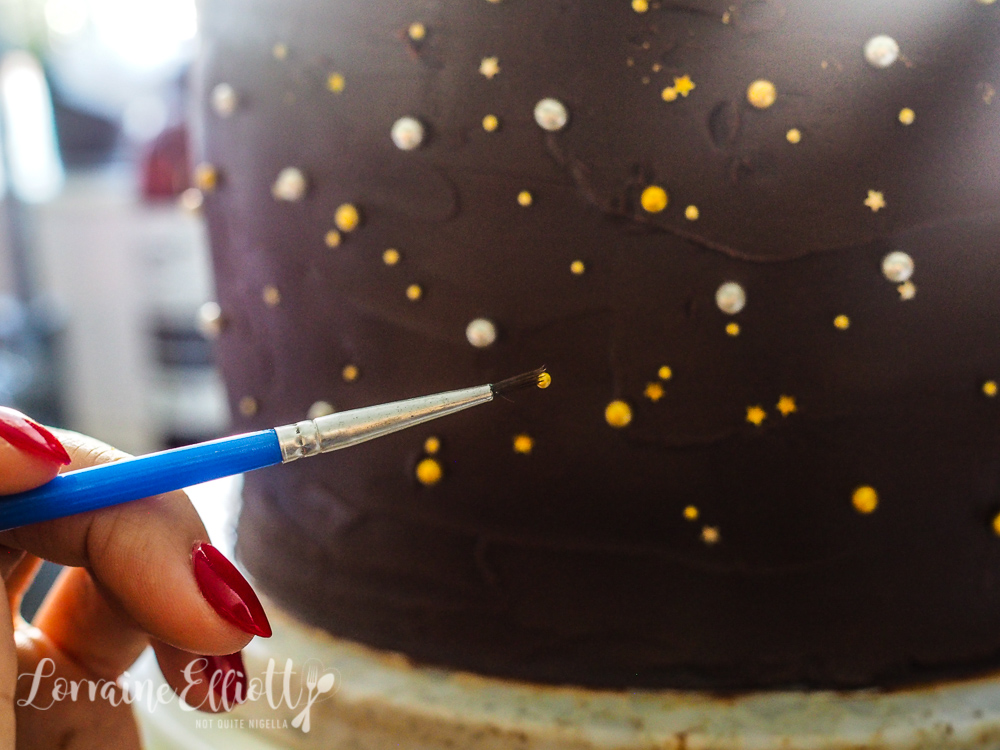 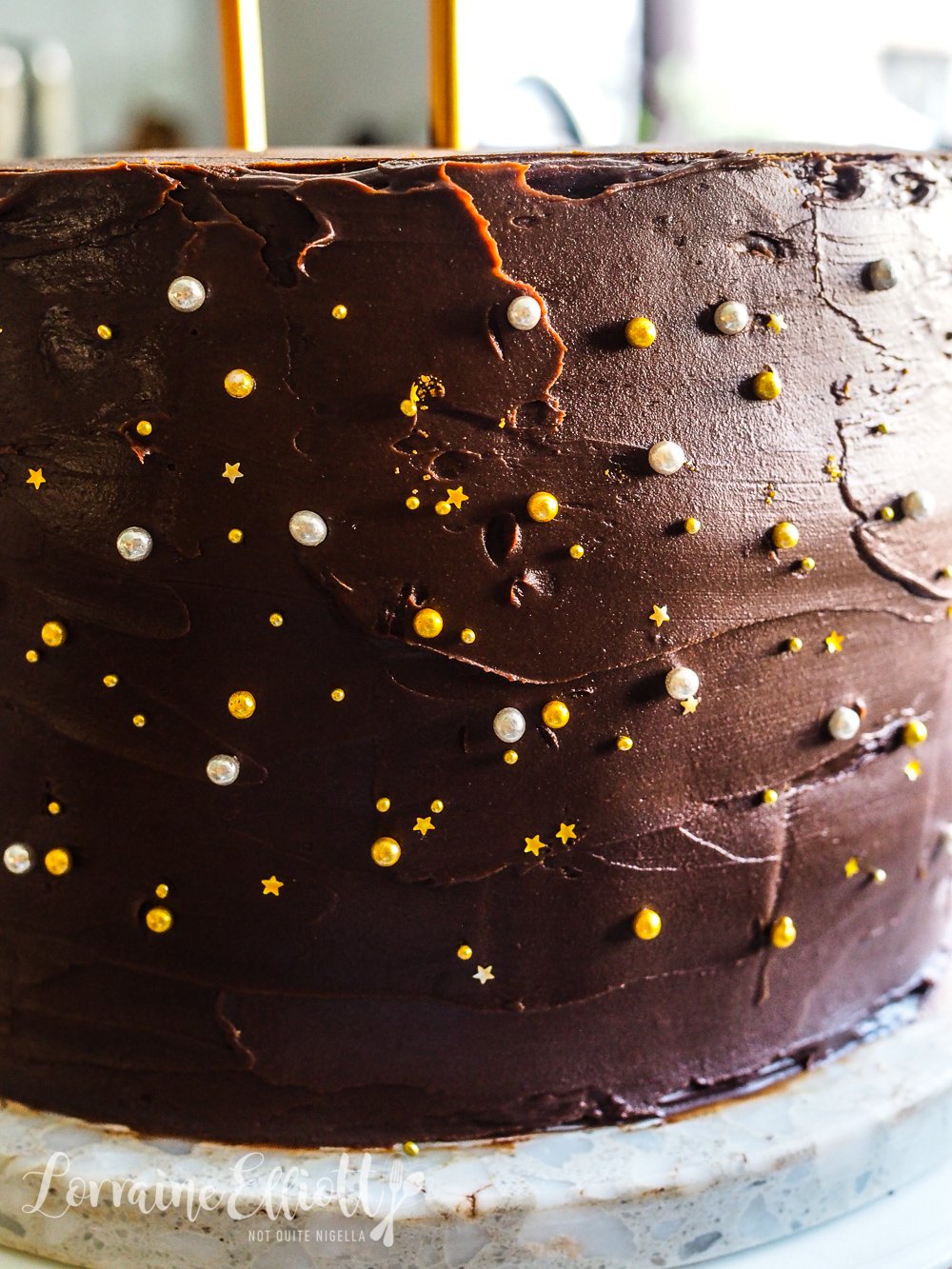