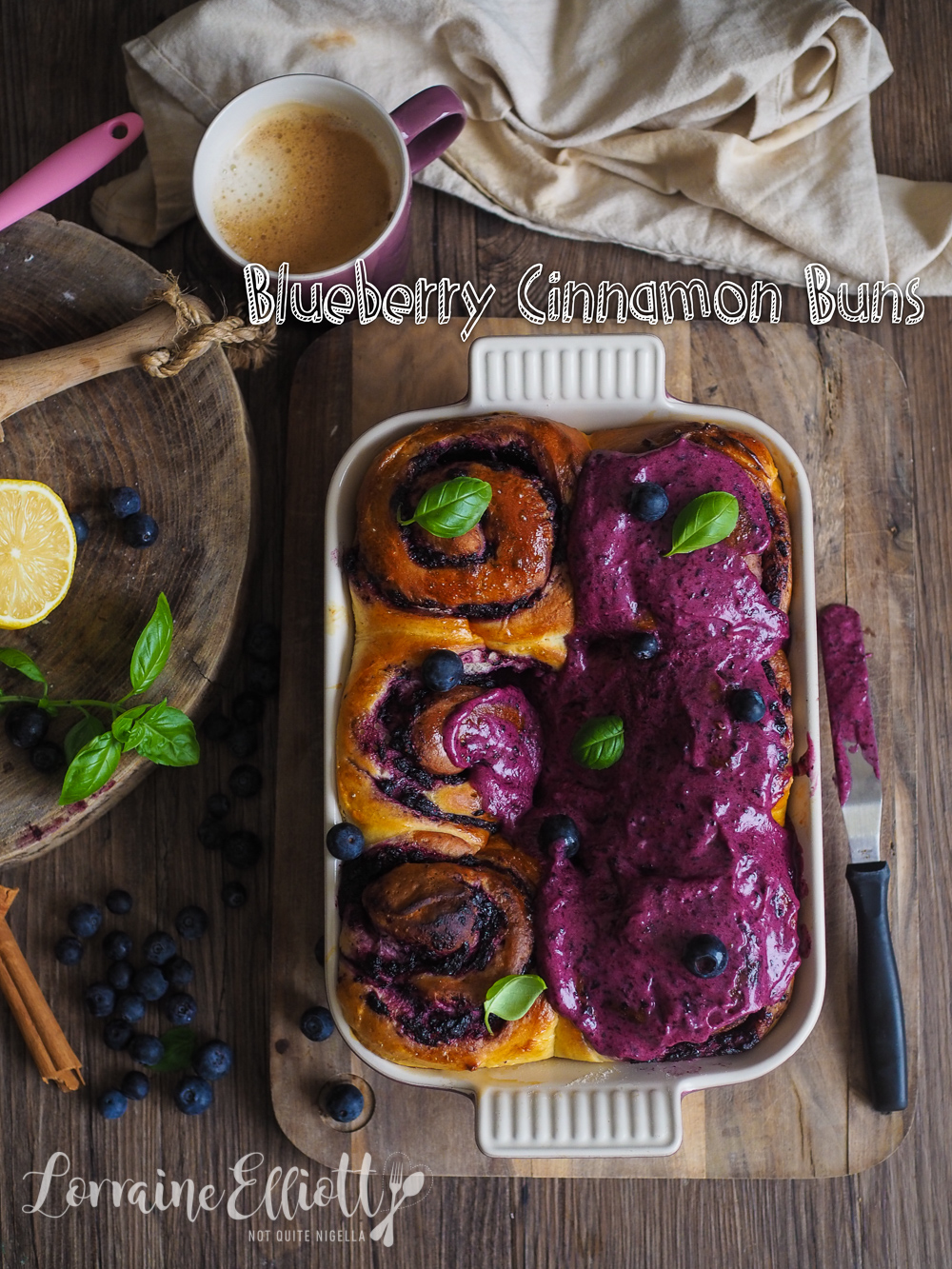 Save these cinnamon buns for when you need a little TLC or when you want to show someone how much you adore them. These enormous, fluffy buns are soft as a feather and filled with blueberry and smothered with a blueberry, lemon and basil glaze. These are a pushy recipe Dear Reader!

By now you probably know my secret to super soft and fluffy buns and that is tangzhong, a very simple flour roux that takes a couple of minutes but produces the lightest, softest bread. These buns taste like the softest brioche dough but they don't contain a lot of eggs or butter. The texture of tangzhong bread is simply heavenly and the tangzhong makes the bread last fresh for days. 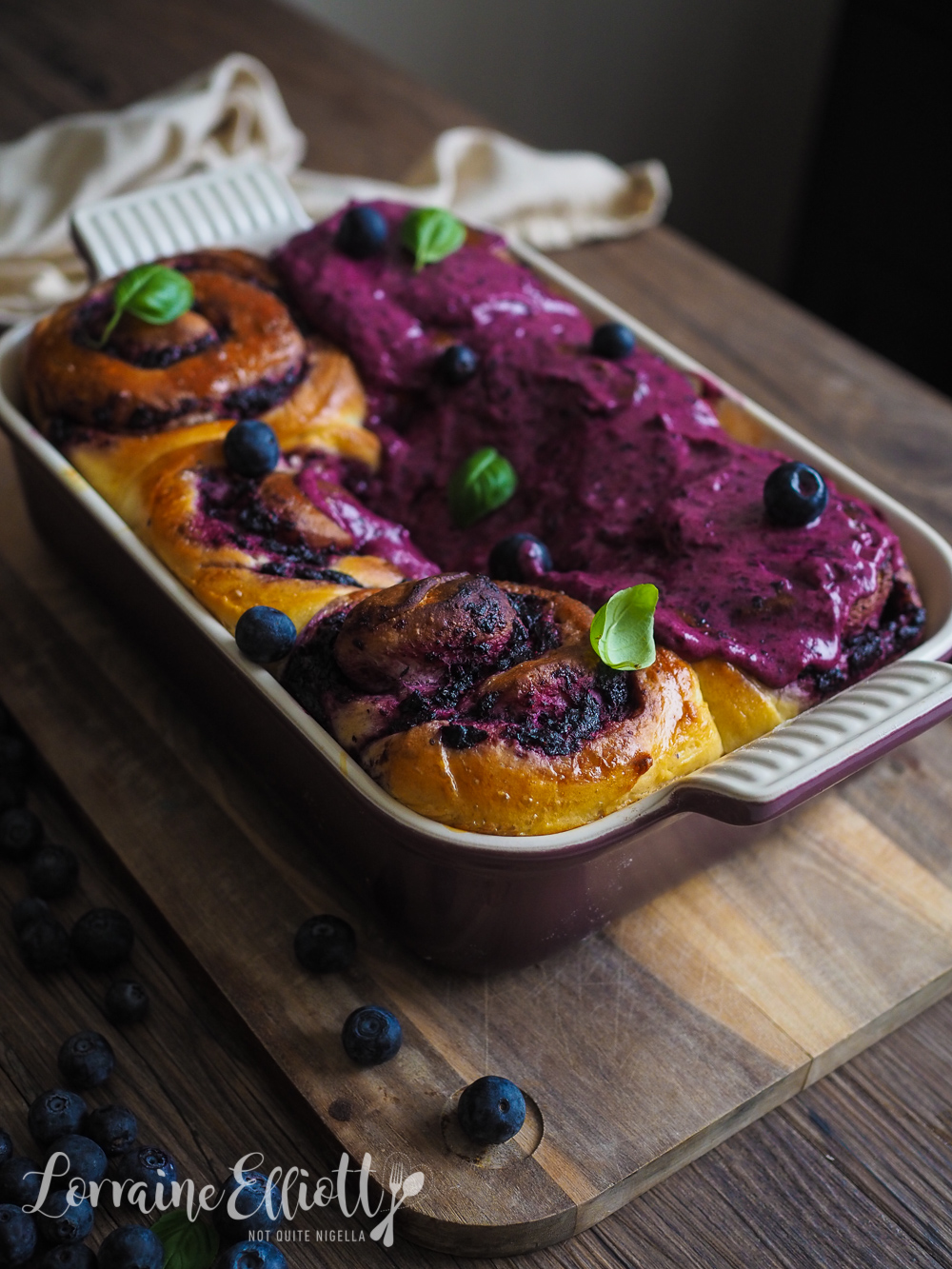 I made these cinnamon buns with blueberries, lemon and basil which is one of my favourite flavour combinations. I used frozen blueberries because fresh blueberries are expensive and it doesn't really matter if they're frozen as you roast them. Roasting the blueberries gives them an intense purple colour and concentrates all of that colour. You can use a low sugar blueberry jam if you want too.

This recipe produces 10-12 enormously, fluffy buns. You can of course cut them smaller and get more buns. 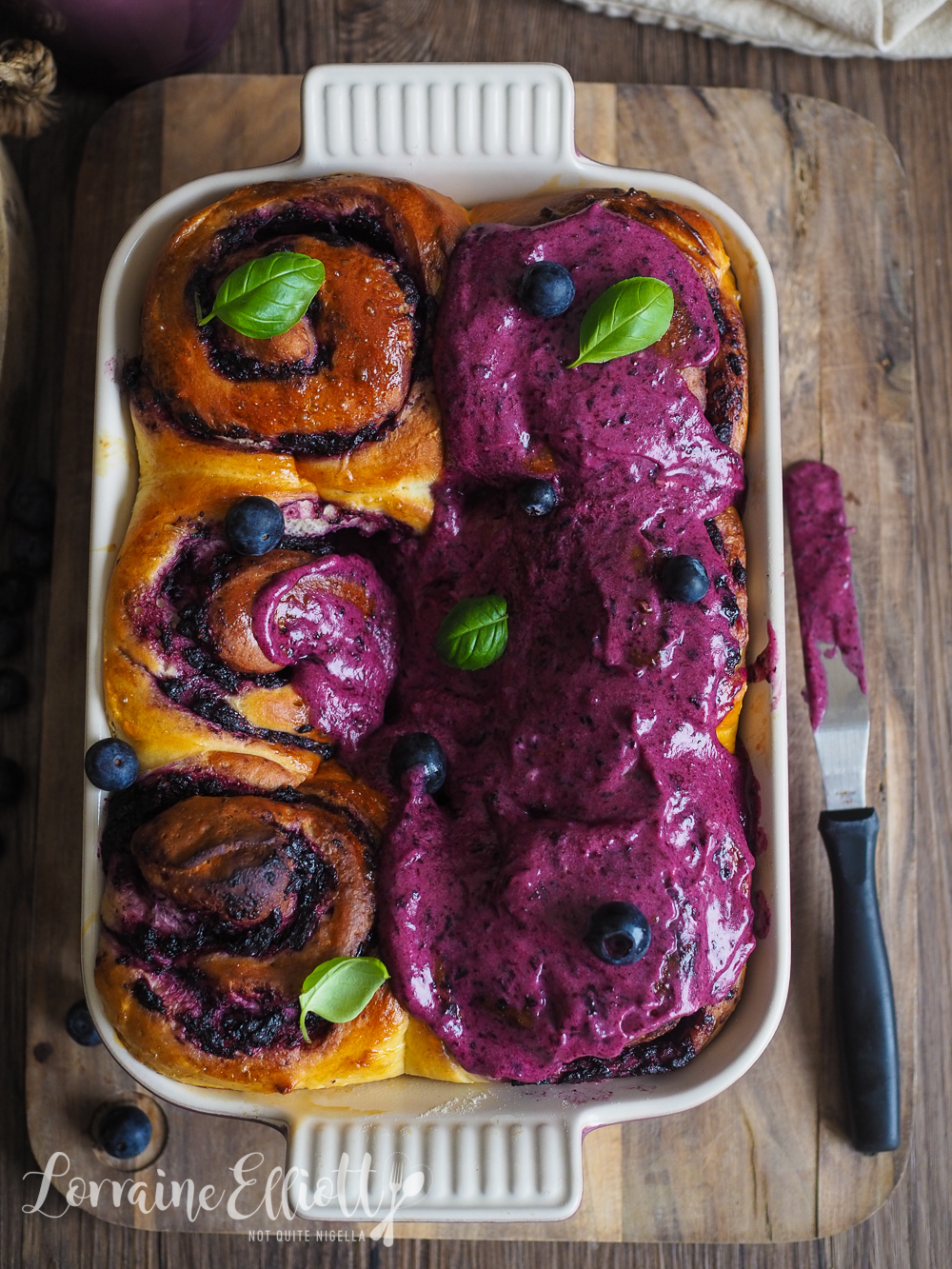 1 - Use tangzhong roux. This makes the cinnamon buns super fluffy but also extends their life so they remain soft for days rather than getting stale quickly like most bread. 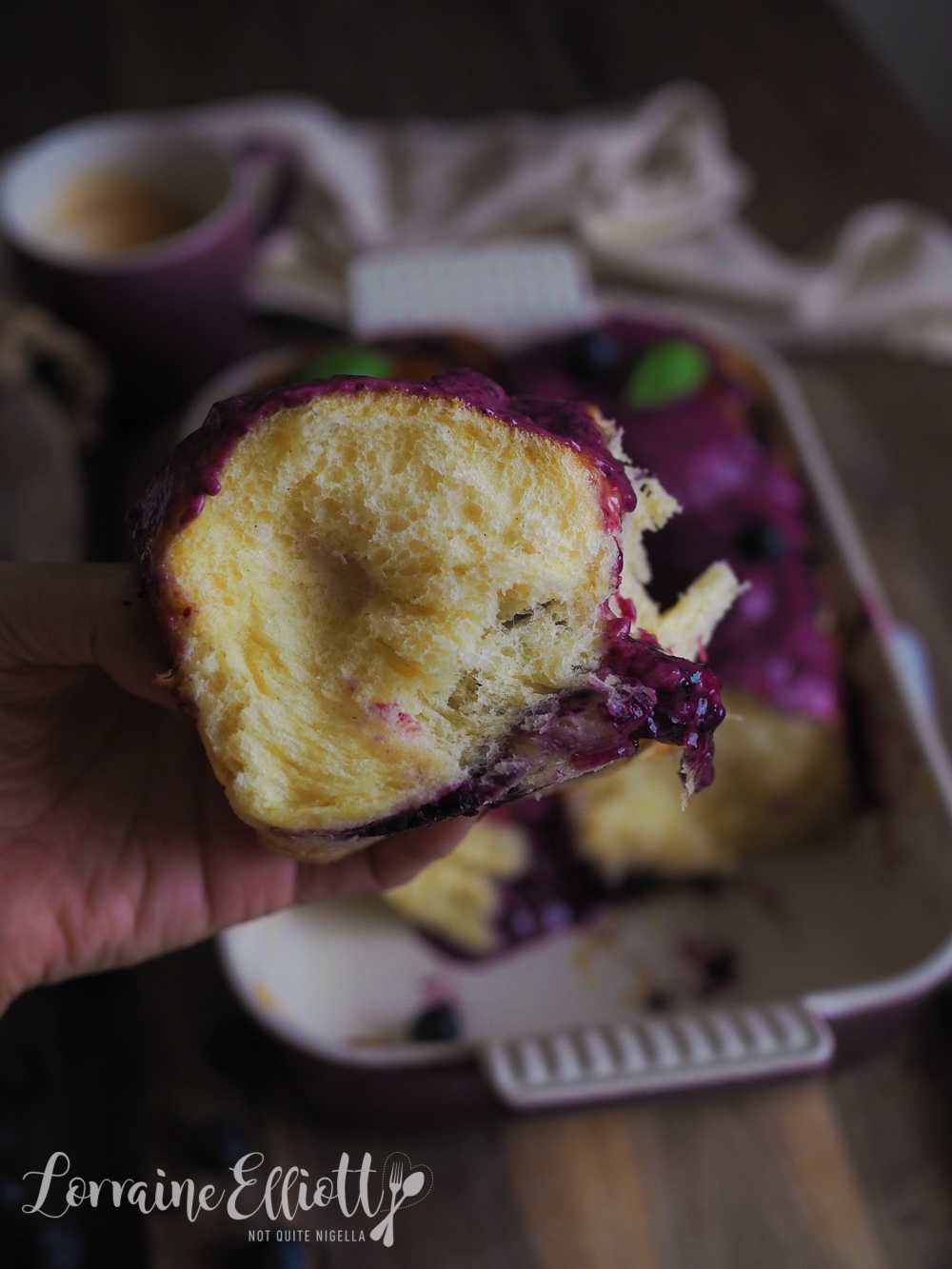 Look at that fluffy texture!

2 - Use dental floss to cut the rolls. This works much better than a knife.

3 - Be generous with the glaze. My glaze isn't overly sweet nor is my bun itself so add more sugar if you like it very sweet. 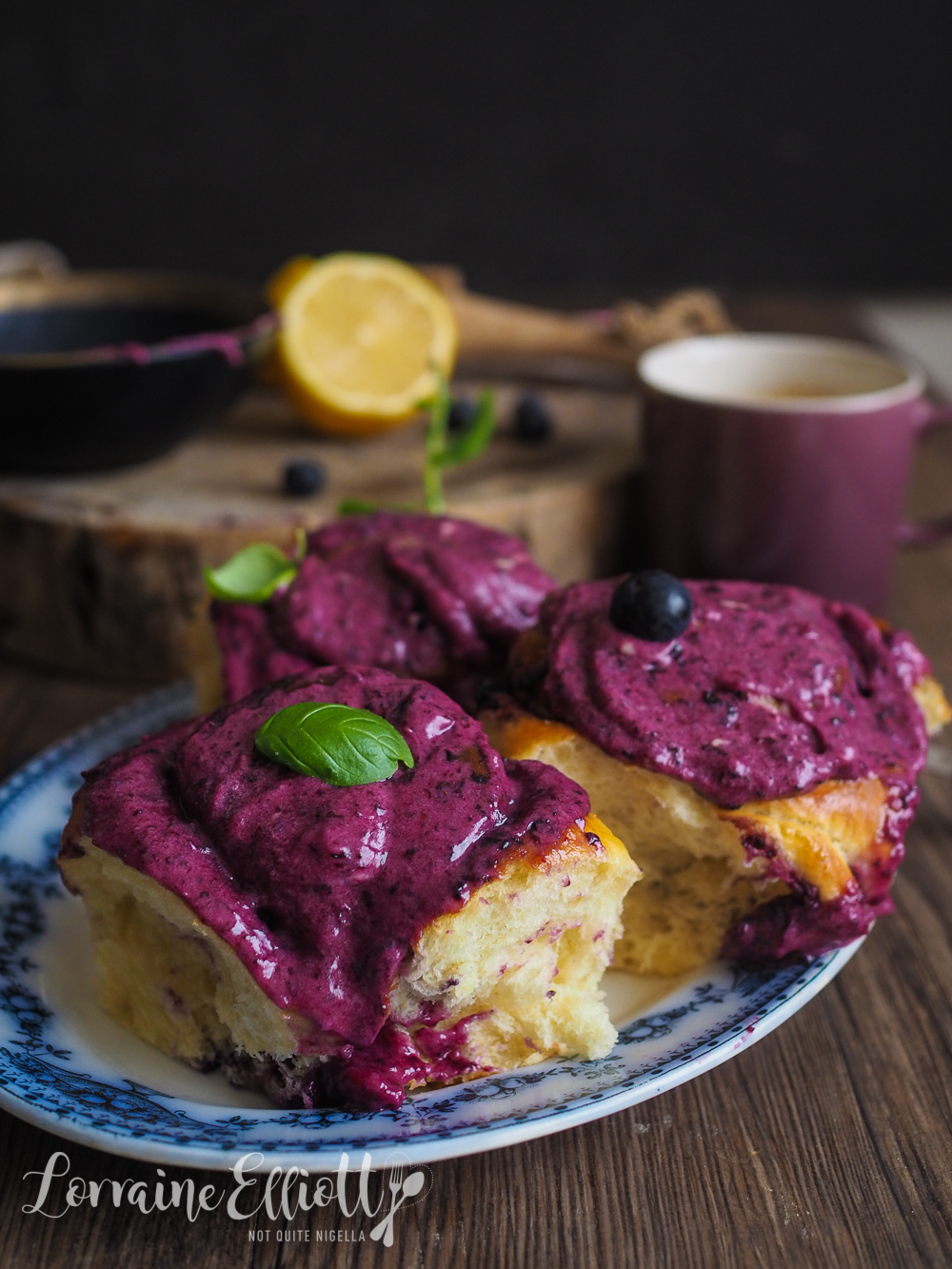 I miss bread making when I don't get to do it. Like when I go away a part of me wants to bring my Thermomix or stand mixer to whip up a batch of buns. It satisfies my need to make people love me for the food that I make because these buns will make people love you! I almost woke up early one day when we were away recently with Mr NQN and Laura to bake these but I realised that while I'd get a challenging arm workout, I'd probably give up halfway and need a mixer.

I got my exercise other ways by hiking. I'm not much of a hiker at all. Mr NQN and Laura would do the early morning hike with Teddy while I slept in and did HIIT at the house. Then Laura and I would do Teddy's evening walk. One day they messaged me excited, "A lady showed us a better path. You might be able to walk on it," Mr NQN said.

The day before I had freaked out slightly while on a hike when branches kept touching me. I don't mind a wide path but when things brush past me it makes me shudder. He then sent me a picture of a clear path. 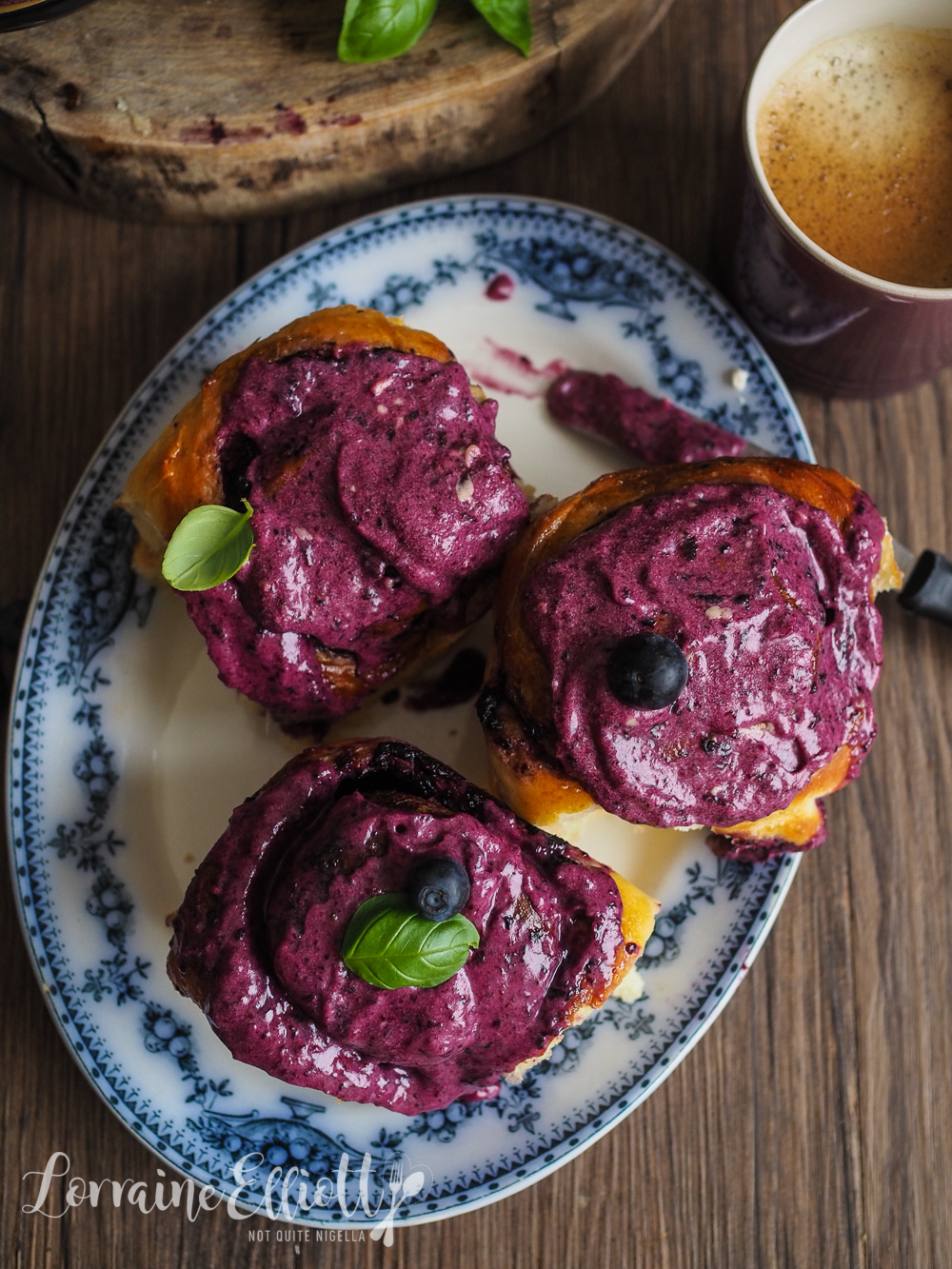 The next day Laura took me there. However because the bush looks sort of the same, we went a slightly off route. A much more difficult route in fact. "Are you sure that this is the easy path?" I asked breathing heavily, beads of sweat forming. I don't sweat much so if I do, it's HARD exercise. "Hmm just wait a second," she said and went further up the steep incline returning a few seconds later. "Ok that was the WRONG path," she said laughing. We found the correct one about 50 metres away and joined the more leisurely route.

We laughed about it and I wondered if we should tell Mr NQN that we got slightly lost. "No! He will make me walk the harder path tomorrow!" Laura cried.

"Don't worry, I'll tell him that a giant boulder rolled down the hill and closed off the pathway to the route, just like in Indiana Jones," I promised her. Because some secrets are best kept secret!

So tell me Dear Reader, do you ever bring a big mixer when you go on holidays? Are you a hiker? 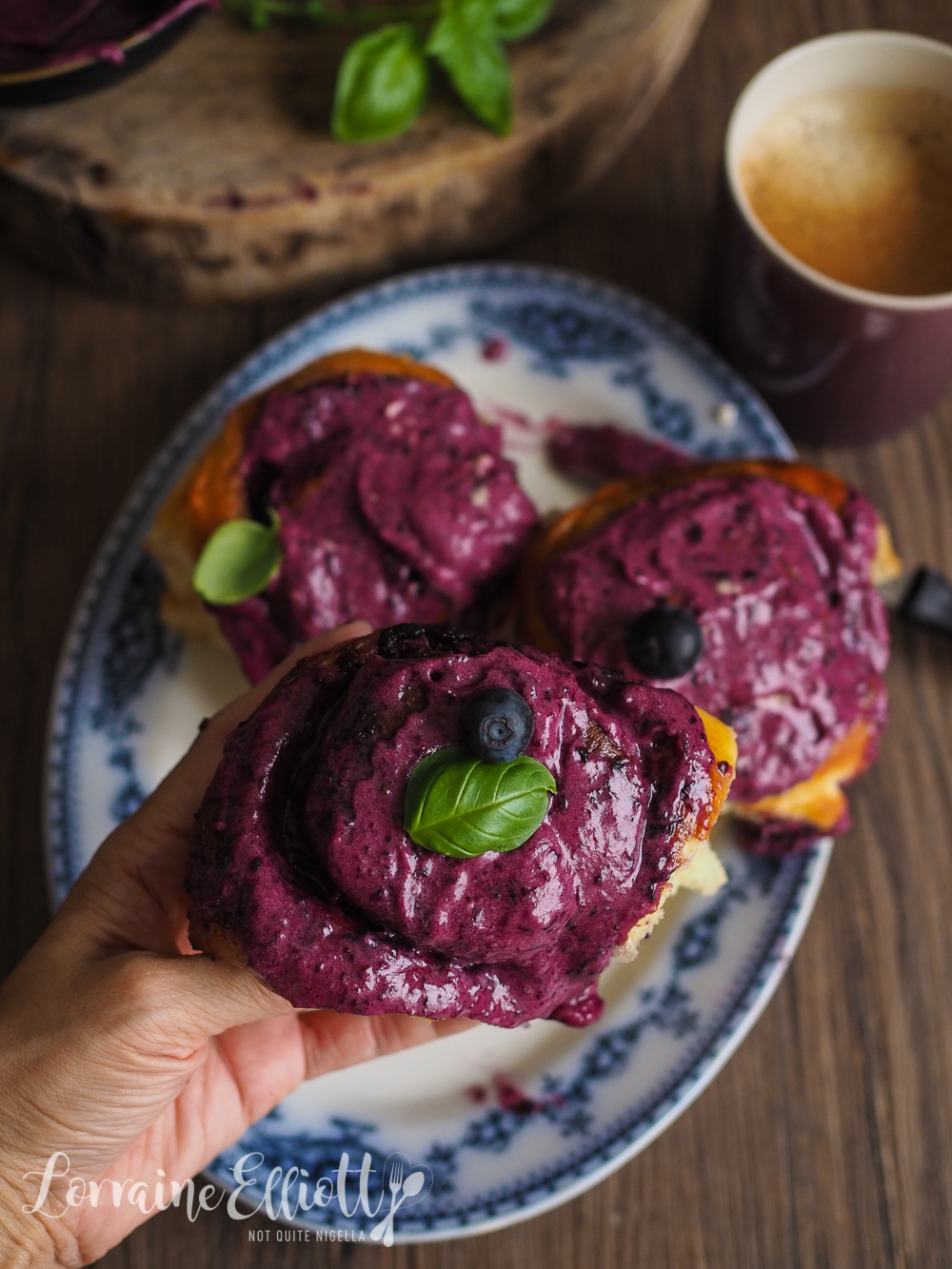 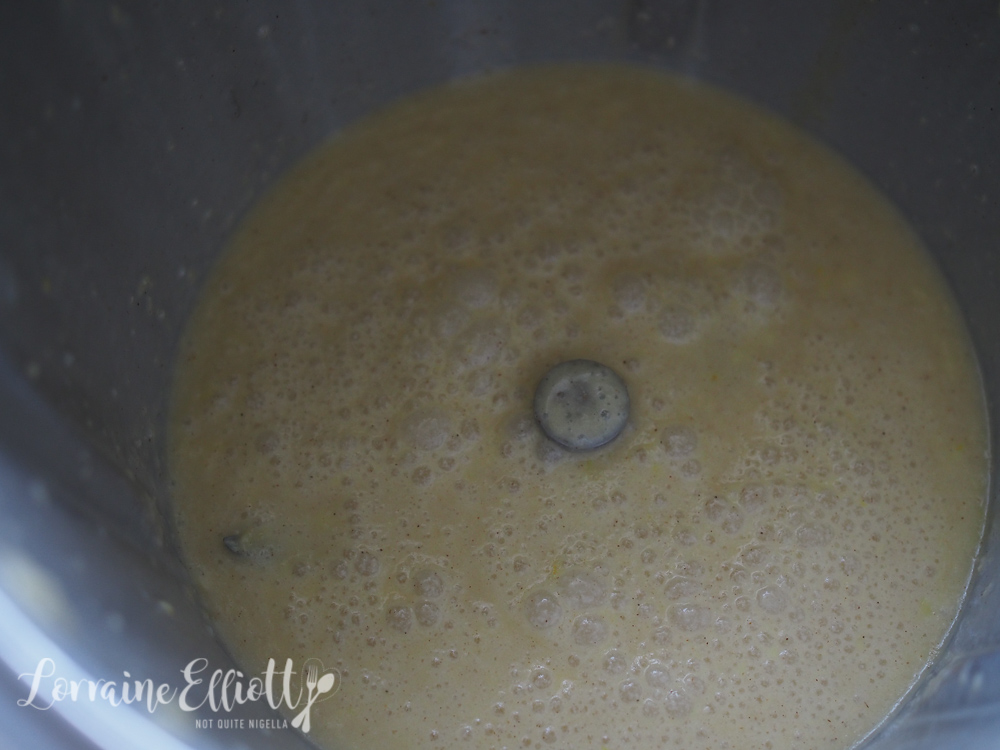 Step 1 - First make the tangzhong roux. Take out 20g/0.7ozs of flour from the total weight of flour and mix with the water. Heat in a small saucepan until it reaches 65C/149F and the whisk in the butter, then the milk, sugar, eggs, lemon zest, cinnamon, vanilla and salt until smooth. 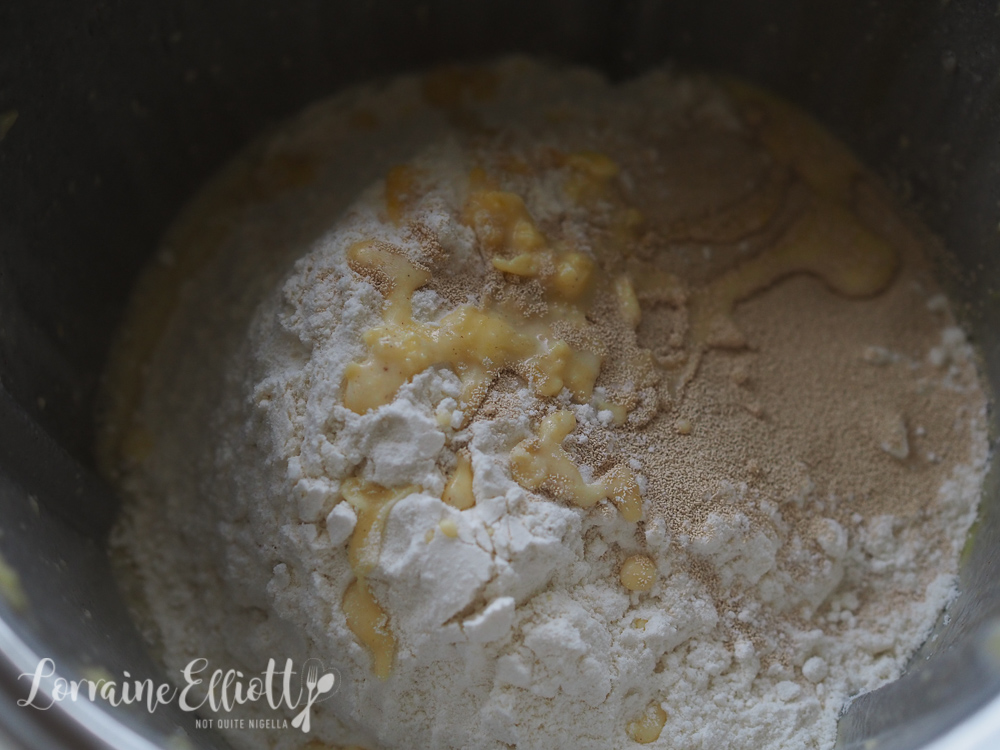 Adding the yeast and flour to the tangzhong roux

Step 2 - Place the remaining flour and the yeast in the bowl of a stand mixer and then stir in the tangzhong roux. Then knead for around 10 minutes or so or until you get the window pane effect where you can gently pull apart the dough with floured hands so that you can see through it without the dough breaking. 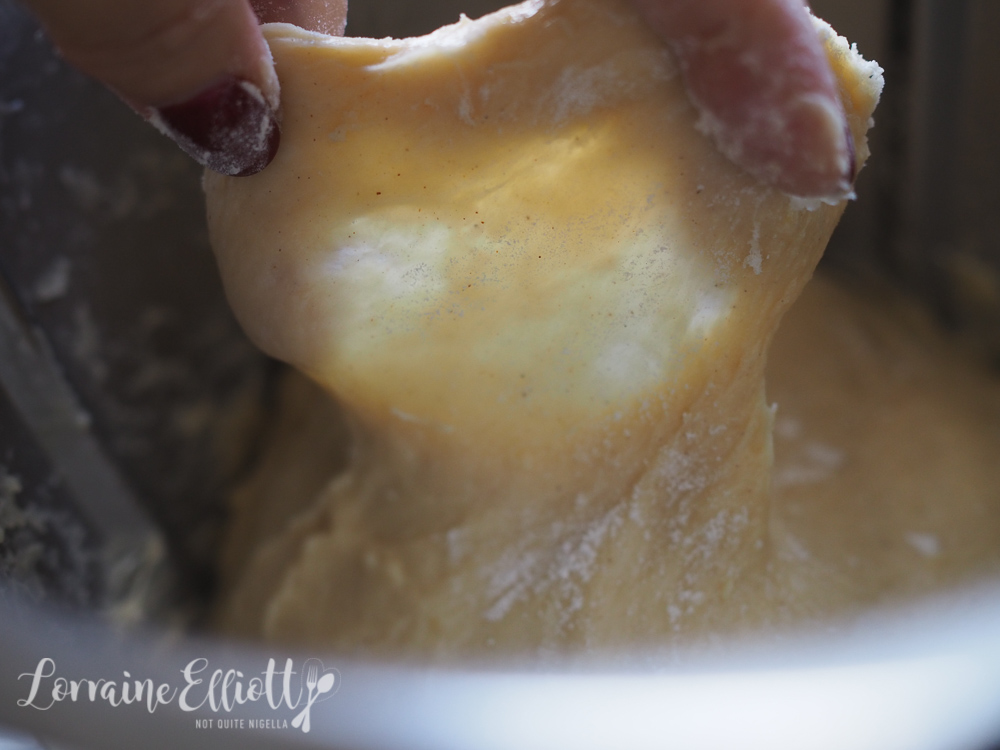 The windowpane effect-seeing through the dough

Thermomix note: Take out 20g/0.7ozs of flour from the total weight of flour and mix with the water and place in Thermomix bowl. Set for 10 seconds speed #4. Then set to 65C for 7 minutes at speed 0.5 until it makes a roux paste. Then add butter, then the milk, sugar, eggs, lemon zest, cinnamon, vanilla and salt and set to 15 seconds speed #4. Place the remaining flour and the yeast in the Thermomix bowl and set to 10 seconds speed #3. Then set to knead function for 9-10 minutes. You should be able to gently pull apart the dough with floured hands so that you can see through it without the dough breaking.

Step 3 - Place in a large oiled bowl and cover and allow to rise until 2-3 times the size (around 1 hour). 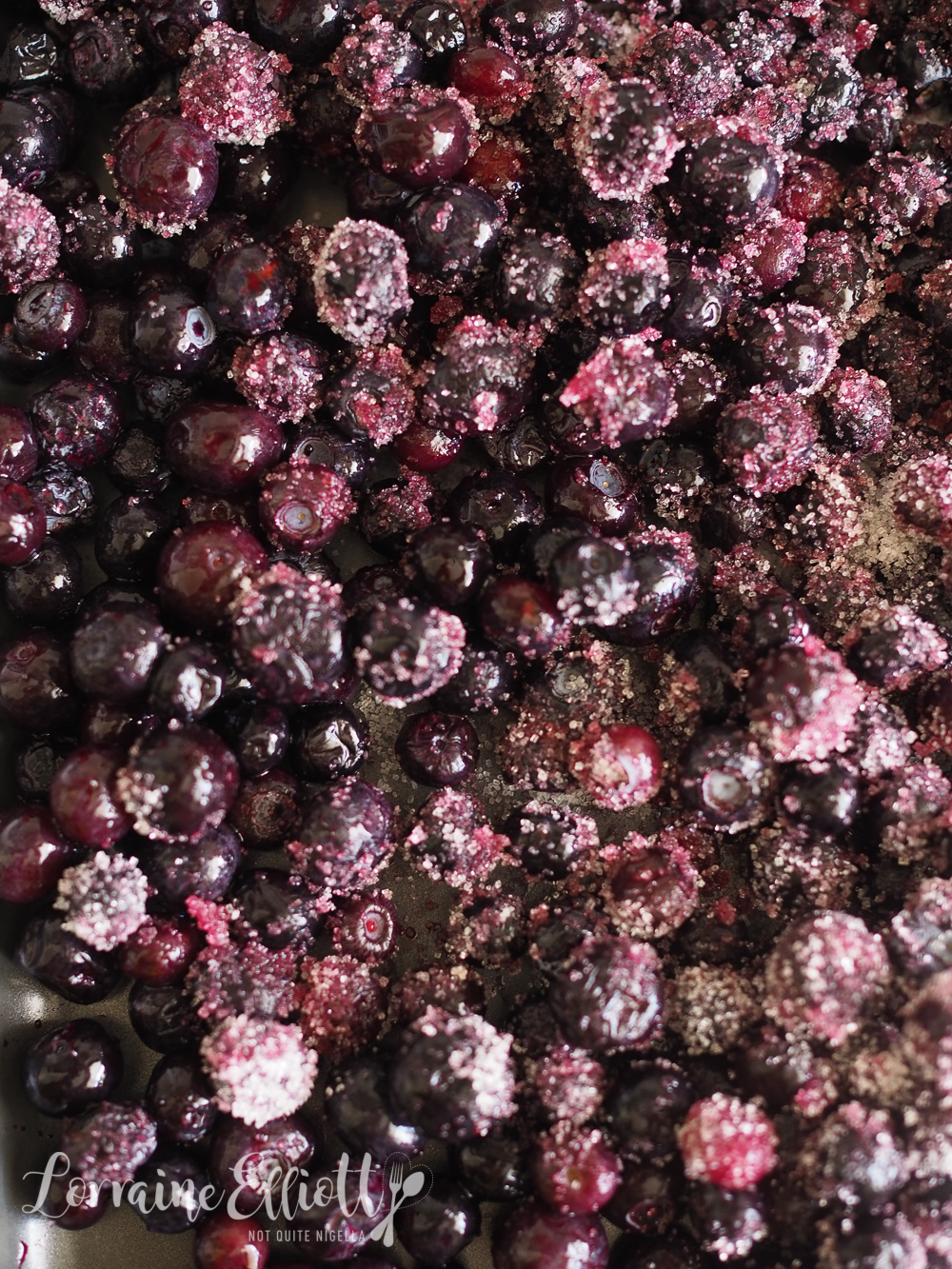 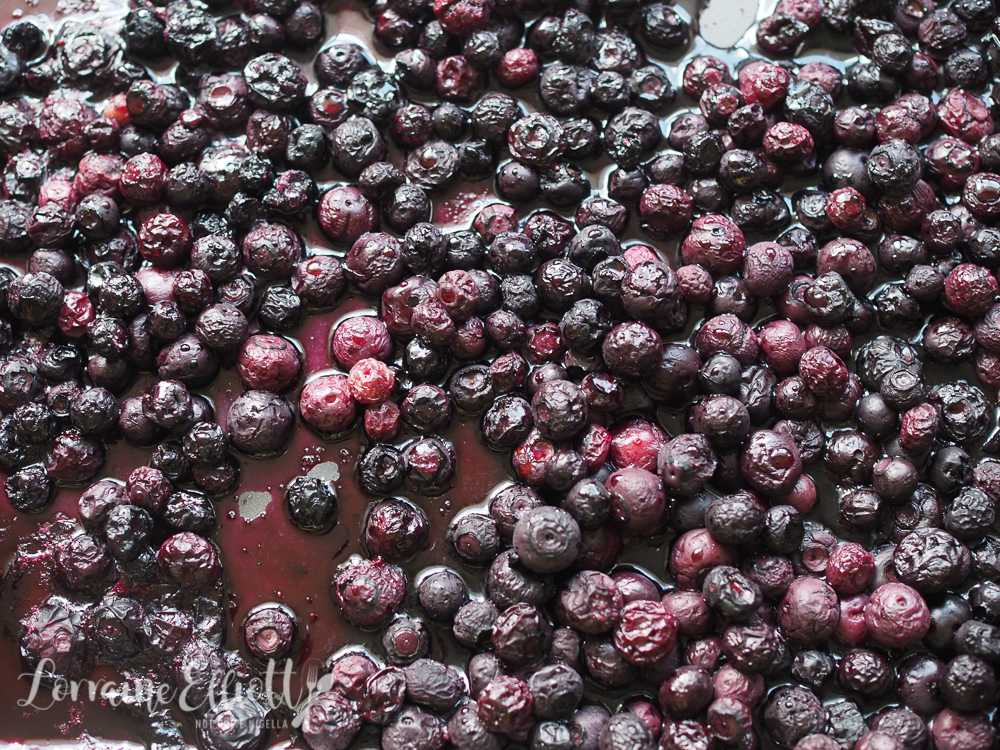 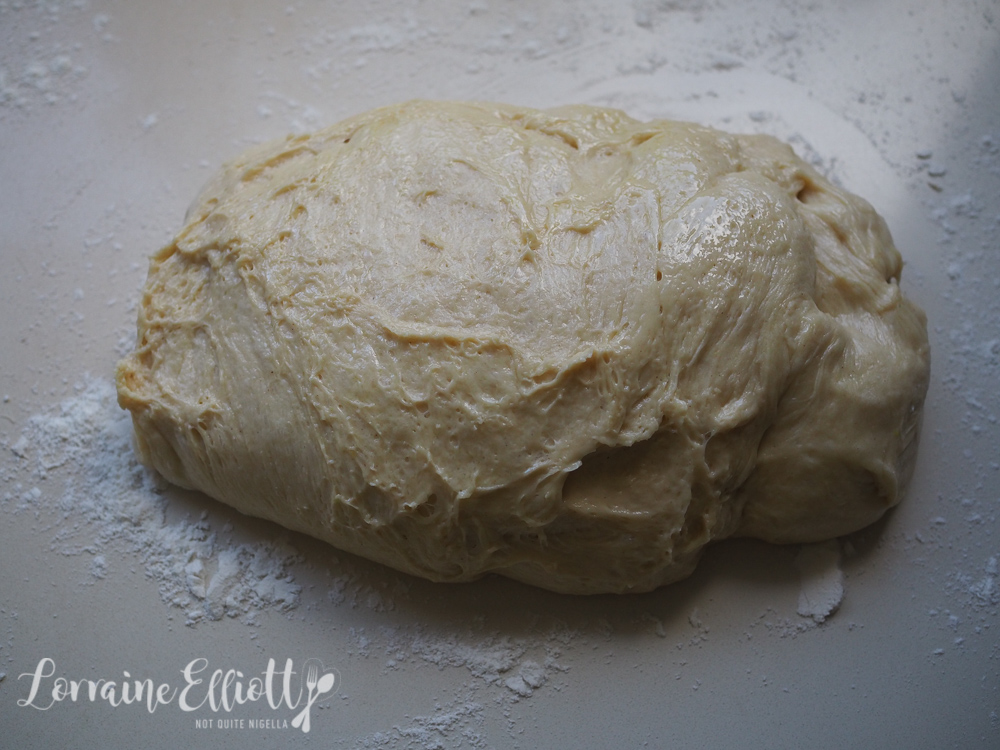 The dough, don't worry if it's sticky, just flour the surface

Step 5 - Line a 22x30cm/8.6x12inch baking tin with parchment and flour a large surface. Punch the dough down and then roll it out to become around 50x40cms or 20x16inch rectangle. I find it easiest to stop halfway and rest the dough for 5 minutes once I stretch it out to a certain size as the gluten won't allow you to stretch it further. Make sure that you dust flour under the dough so that it doesn't stick. 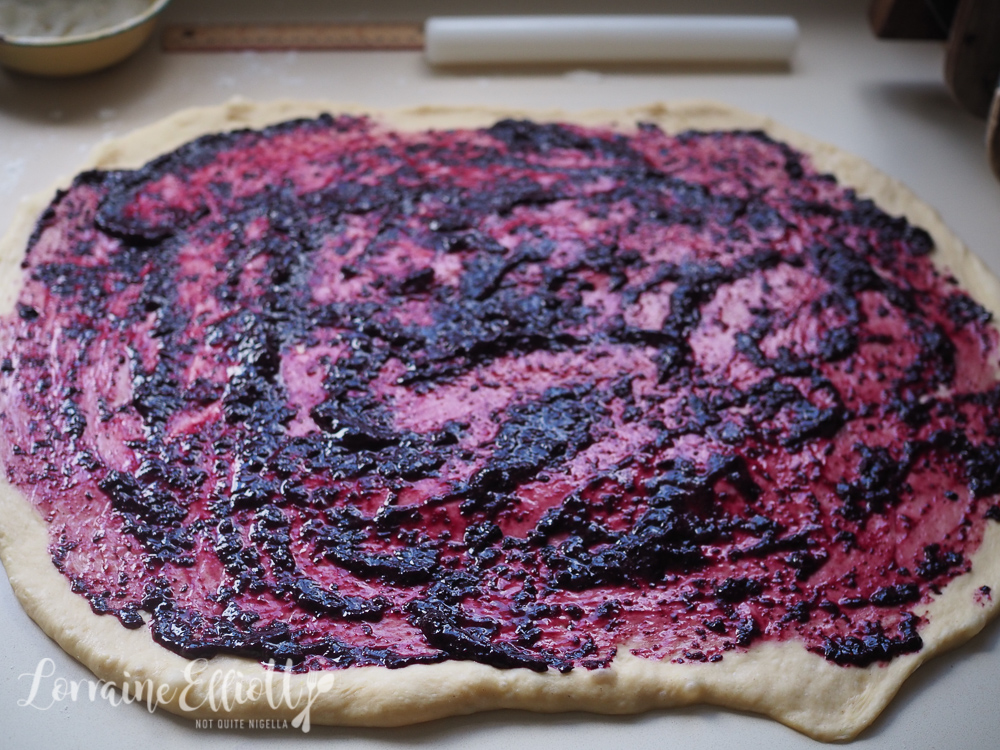 Step 6 - Spoon the filling over the dough reserving 1/4 of the blueberry filling to use in the glaze. Roll the dough up from the longest side (the 50cm/20inch side) to form a log. The dough and filling will be quite soft but that's ok. 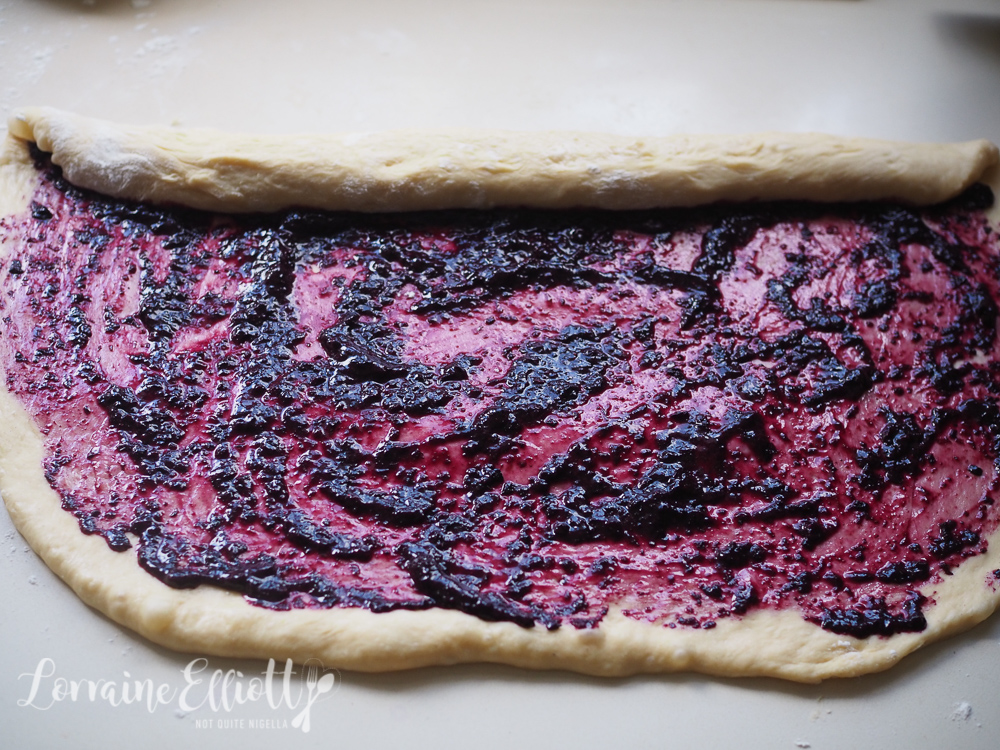 Rolling up the dough on the longest side

Step 7 - Using some dental floss , cut the ends off (cook's treat!) and then cut the rest into 12 slices. Place in the prepared tin. Allow to rise for a second time for 30 minutes. Bake in a 180C/350F oven for 25 minutes or until lightly golden. 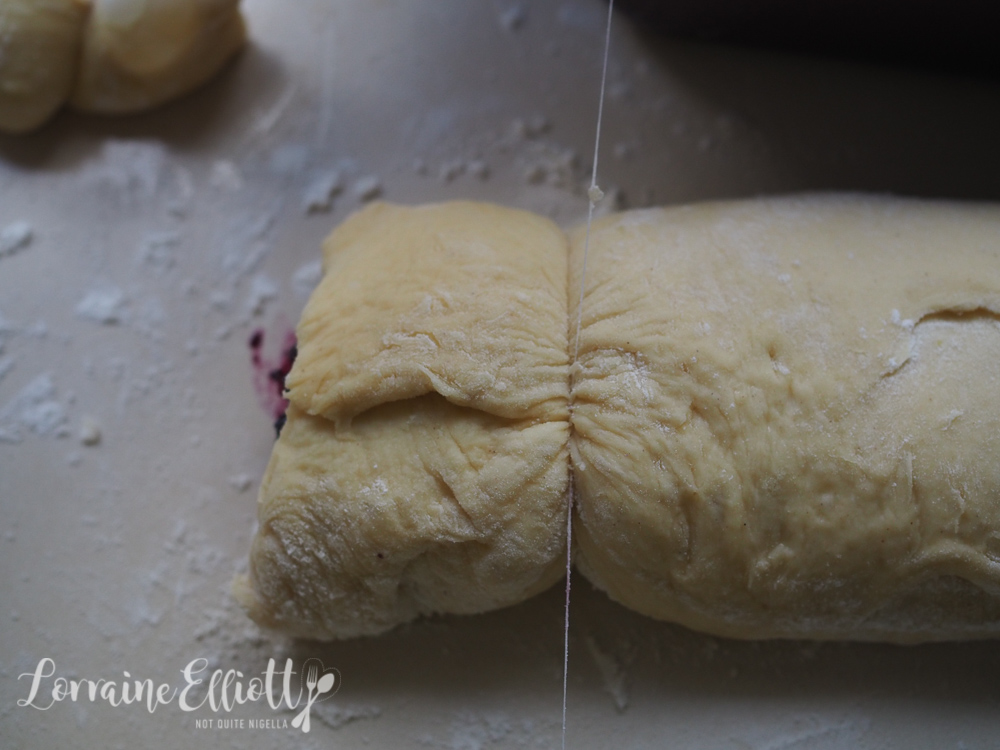 Cutting the dough with dental floss! 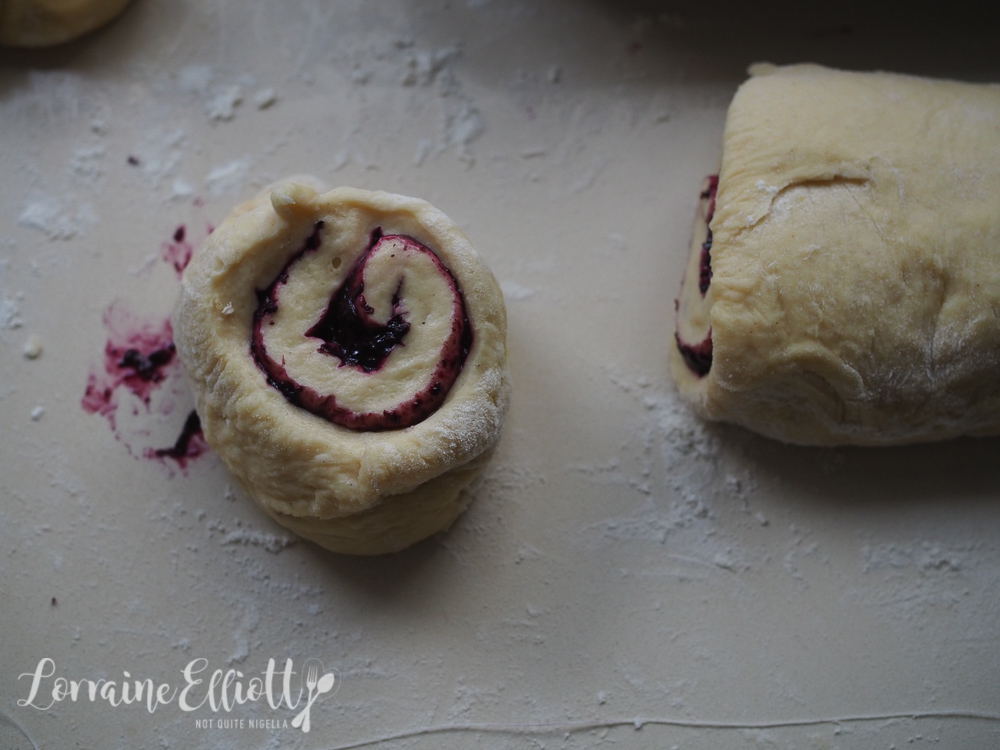 Step 8 - To make the glaze, blend the melted butter, cream cheese, icing sugar, milk, vanilla, lemon zest and basil leaves. Pour the glaze over the warm buns and serve. These buns also freeze well for 3 months. Store the buns in the fridge as the cream cheese icing requires refrigeration. 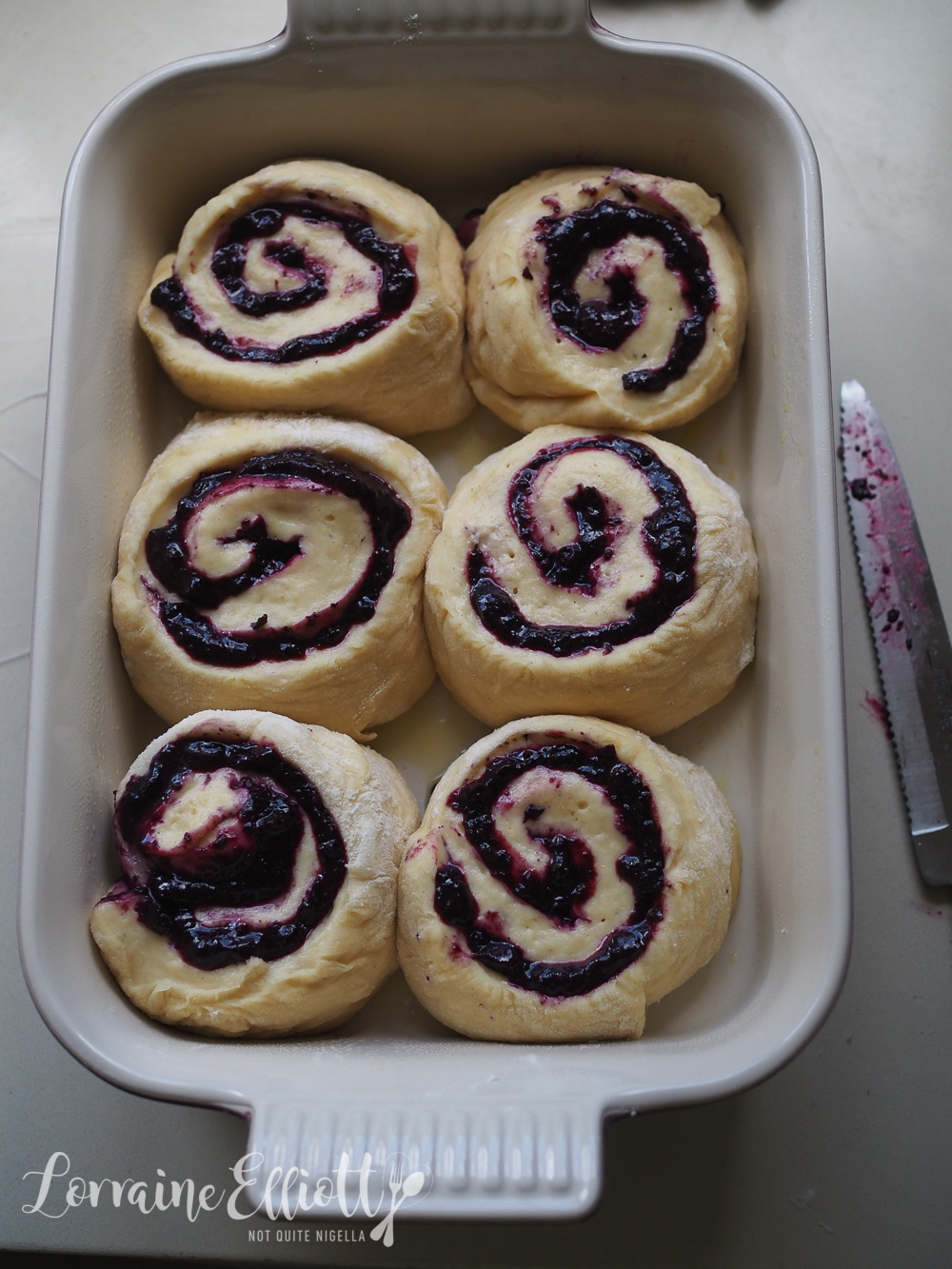 Placing half the buns in a buttered baking dish 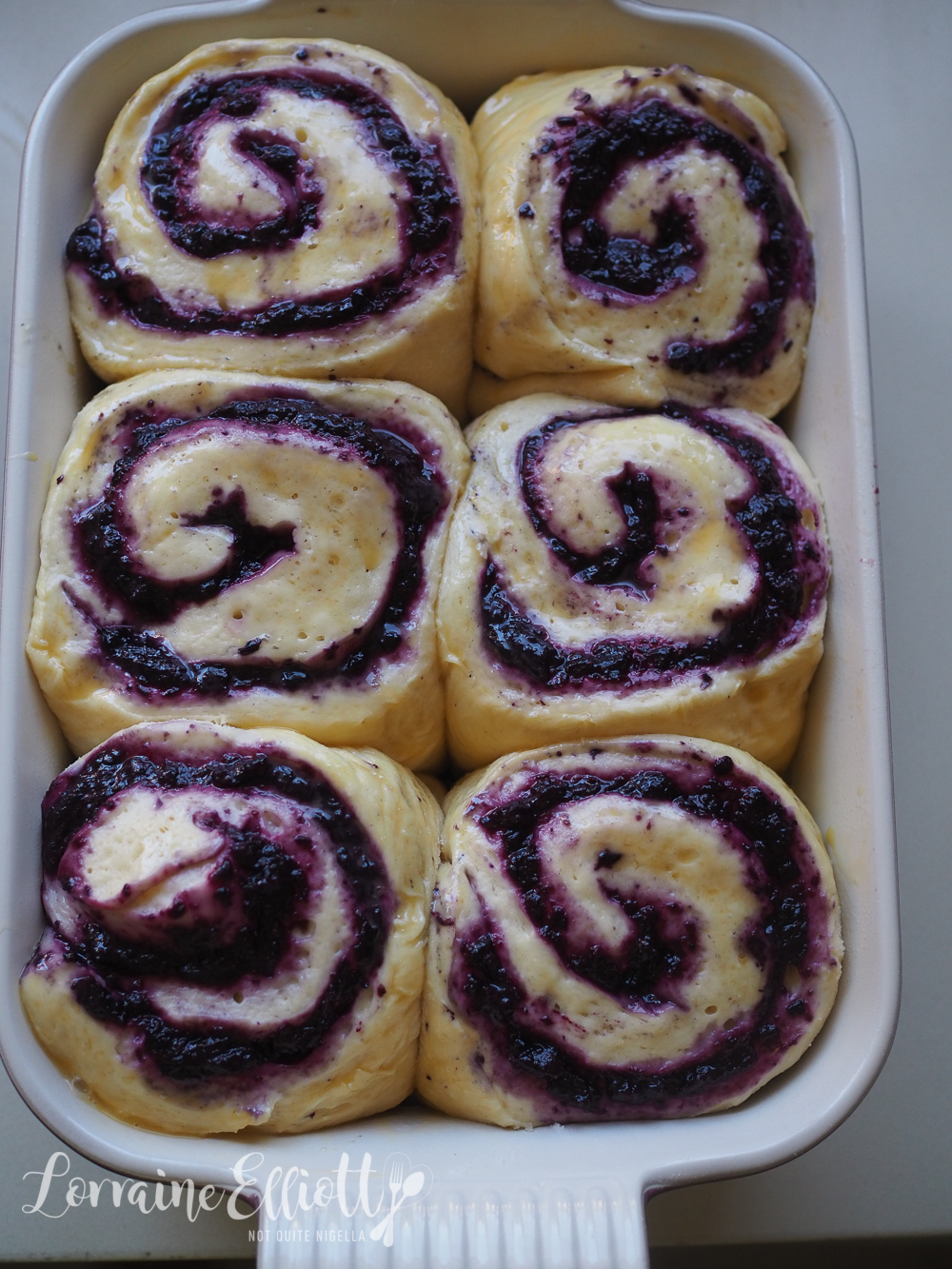 After rise, ready for egg glazing and baking