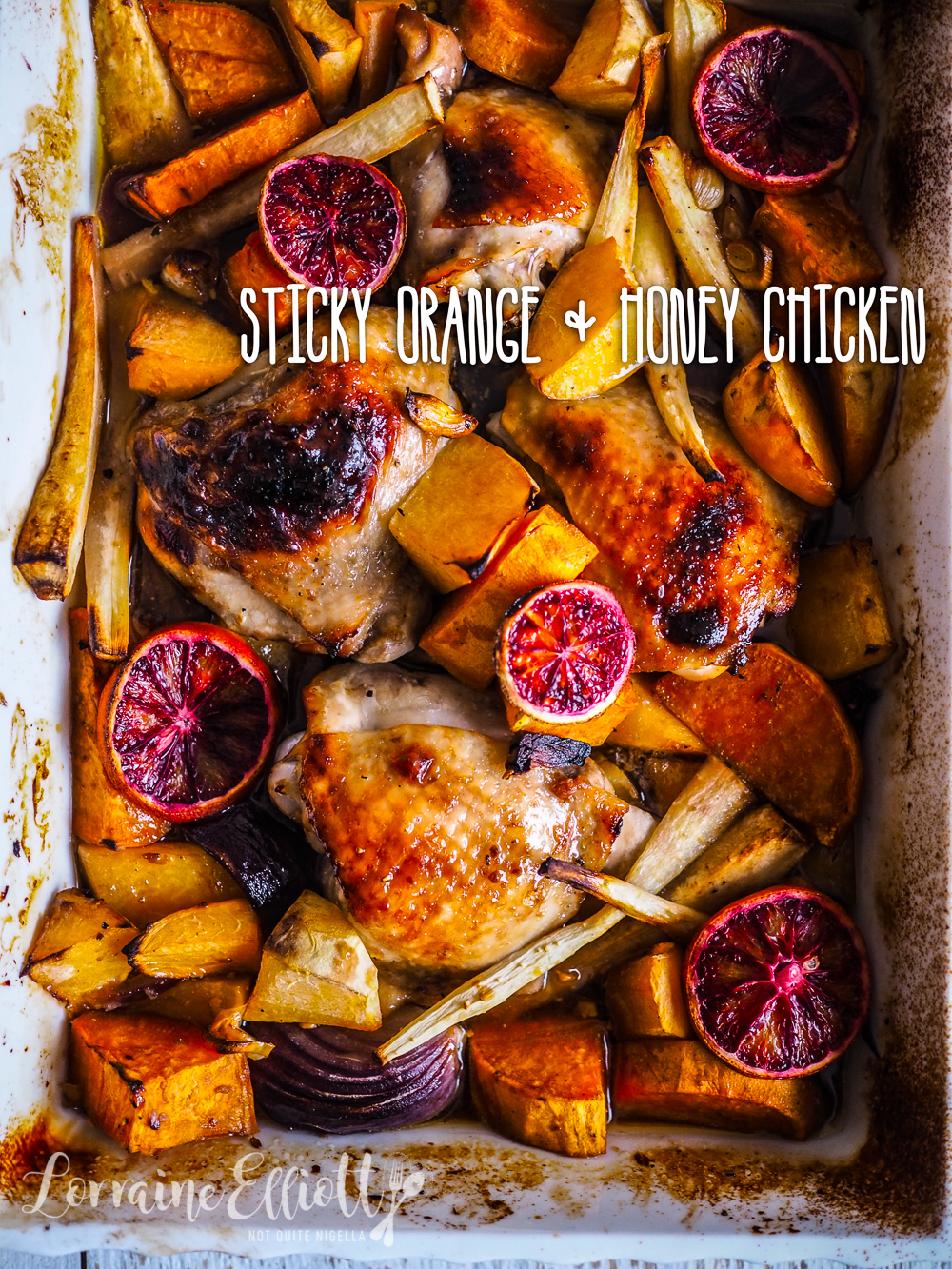 Want to make the most of blood orange season? Try this wonderful chicken tray bake that creates a wonderfully easy dish making use of any of the season's root vegetables. Chicken thighs are baked in a tray with parsnips, swede and sweet potato with a soy, honey and blood orange marinade. You also end up with a wonderful gravy out of all of it too!

Blood Orange season is always such a treat for me and my friend Girl Next Door shared with me her recipe for sticky blood orange chicken. I adapted it for what I had but it made for such a gorgeous dish that had a great effort to reward ratio. And if you love honey chicken this is definitely a pushy recipe Dear Reader.

A batch of this was left for Mr NQN when I flew down to Melbourne for a few days. I always feel a bit guilty leaving him with Mochi but he seems perfectly happy. He always needs a bit of downtime whereas I'm always trying to cram in activities so I think he enjoys the breather and doing nothing at home. 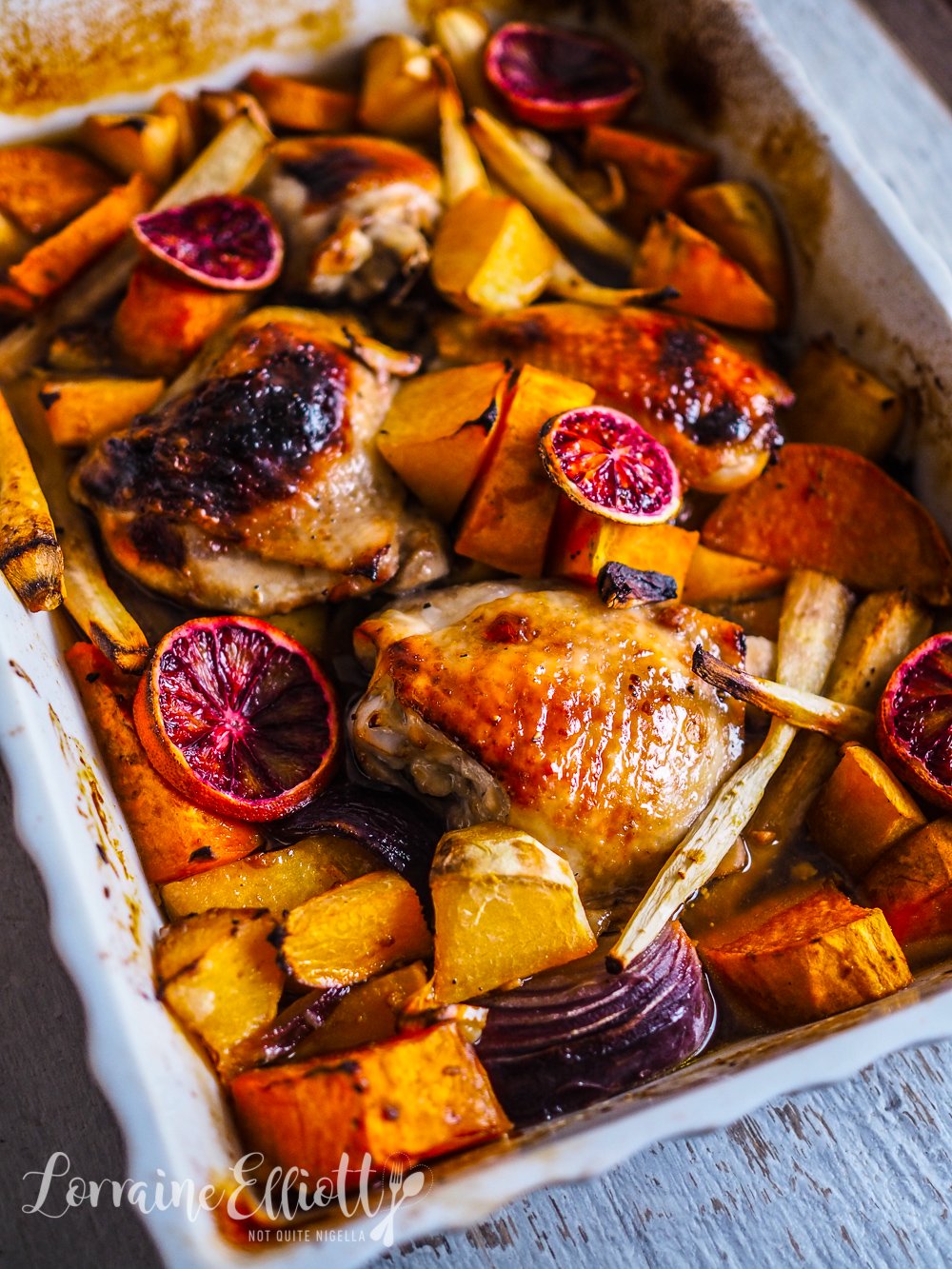 There is one activity that he loves and that is escape rooms. We tried one recently for his birthday. We had had a negative experience with another one where we took forever to get out. So this time we were determined to make sure that we would get out in time and we needed to break the curse.

"We need to study for it," said Nina and I agreed. Because you have to think laterally it does take a bit of time to get into the swing of things. To help matters I made some coffee flavoured energy balls and handed them out to everyone before we went in. We met up before with plenty of time to spare so that we weren't stressed out. I think I may have put too much coffee in the energy balls because I was absolutely wired shortly after eating one of those coffee balls. Because when I tried offering a second ball to everyone I accidentally dropped one on the floor scattering desiccated coconut everywhere.

Mr NQN gave me his usual disapproving look for when I am clumsy-you know the one that says "If you had been more careful then this wouldn't have happened...". As for me I found it hysterically funny and couldn't stop laughing and offering him the dropped ball. He just drily declined saying, "It fell on.the.floor." 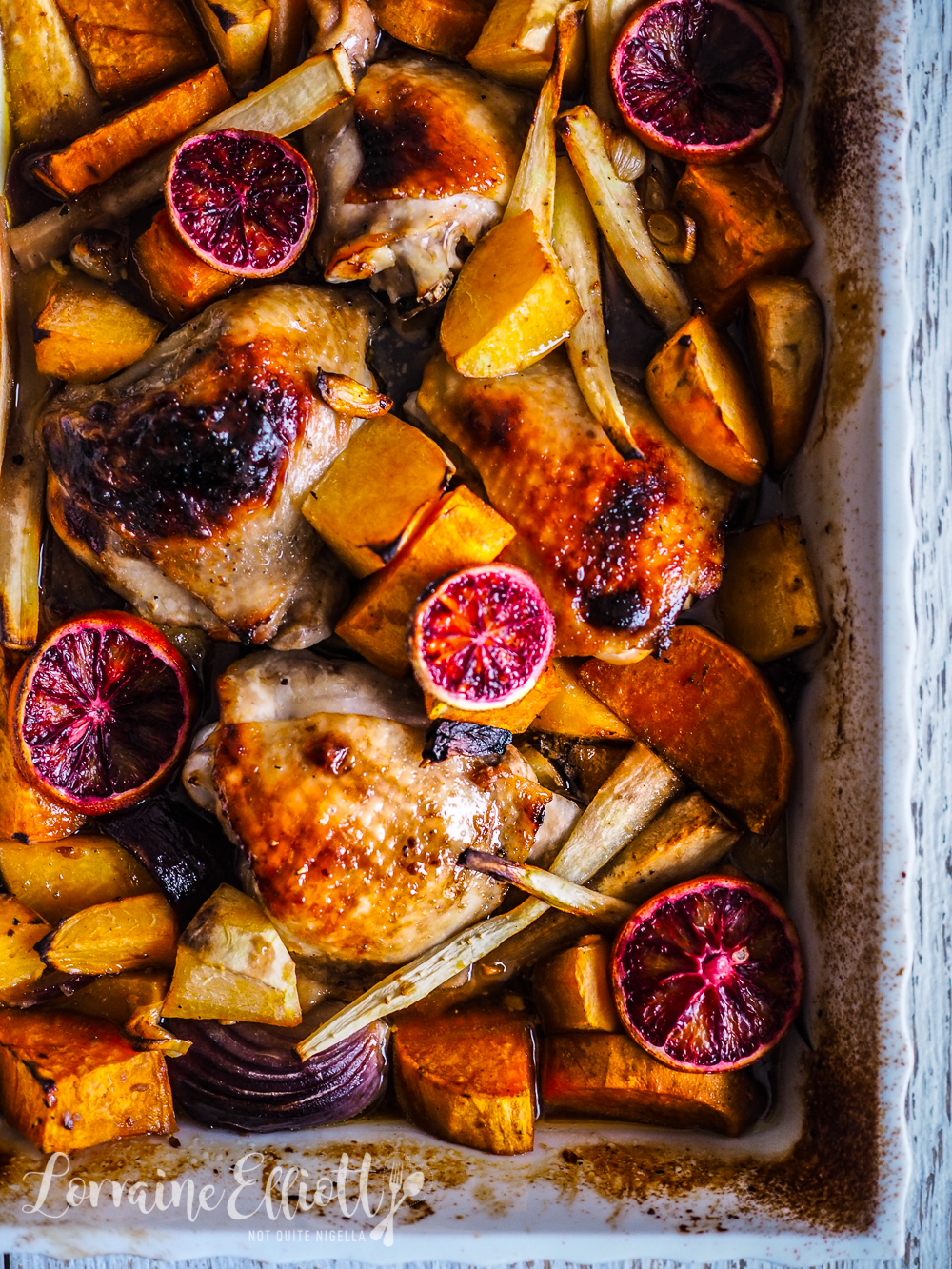 When we had the briefing I asked what percentage of people escaped within the hour alloted. "Just 16%" the guy said. Gulp...

It was a difficult escape room but by more minor miracle we managed to escape with just 30 seconds to spare! I don't know if it was the extra studying beforehand, the hysteria or the coffee energy balls but we were very relieved that we got out and broke the curse!

So tell me Dear Reader, do you ever feel like you need to break the curse of something? Does coffee make your wired or does it have no effect on you? And do you like blood oranges? 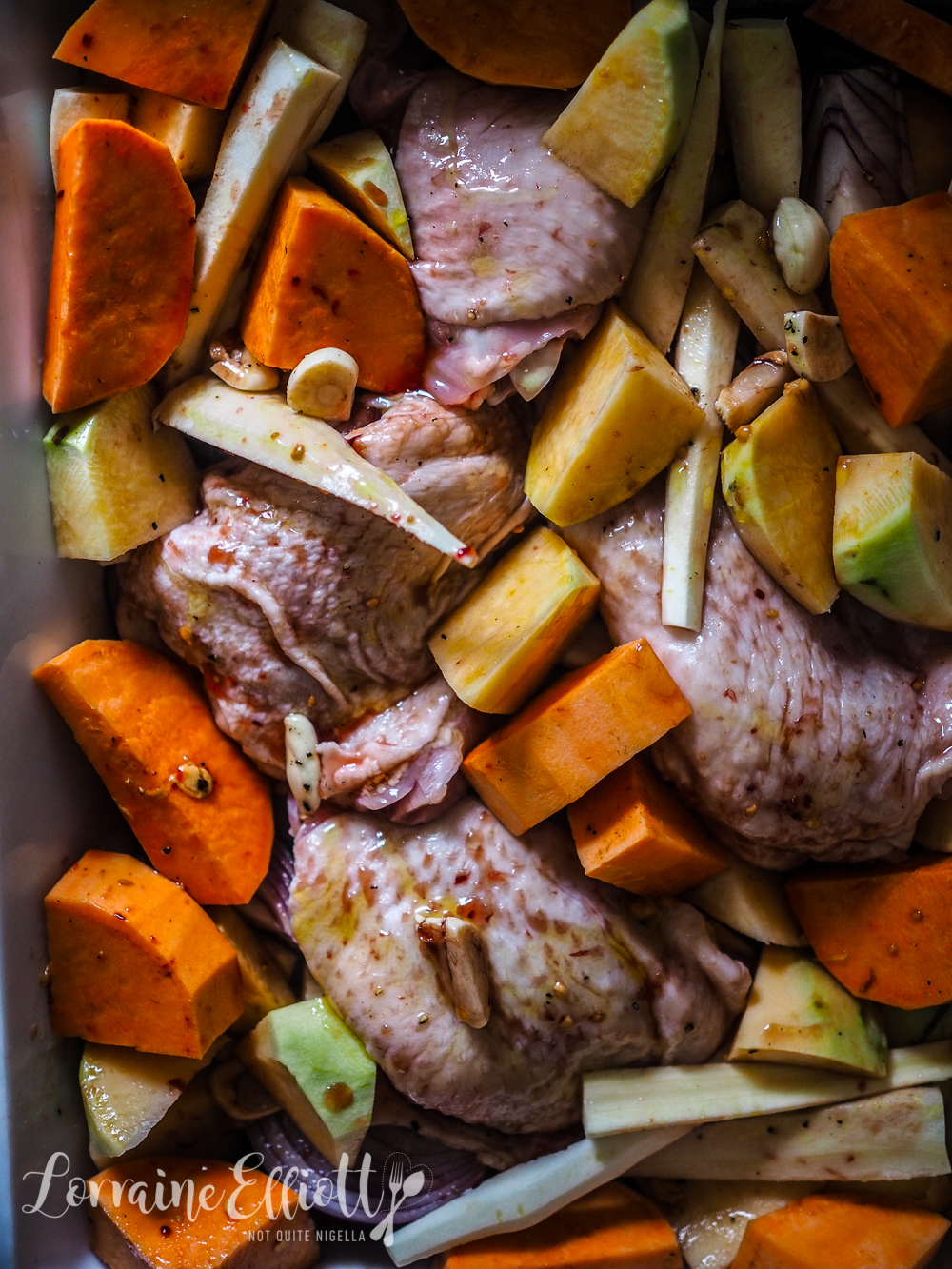 Step 1 - Preheat oven to 200C/400F and have a large roasting tray ready. Cut up the onion, parsnips, swedes and sweet potatoes. The swedes will take the longest to cook so cut those in bite sized pieces. The parsnips are best cut as batons while the sweet potato can be rather large chunks as they take the shortest to cook (not too large though).

Step 2 - Nestle the chicken thighs and vegetables around them. In a jug whisk the juice, soy sauce, honey, oil, mustard and salt. Pour this over the chicken and roast for 45 minutes taking it out once or twice and spooning over the juices. 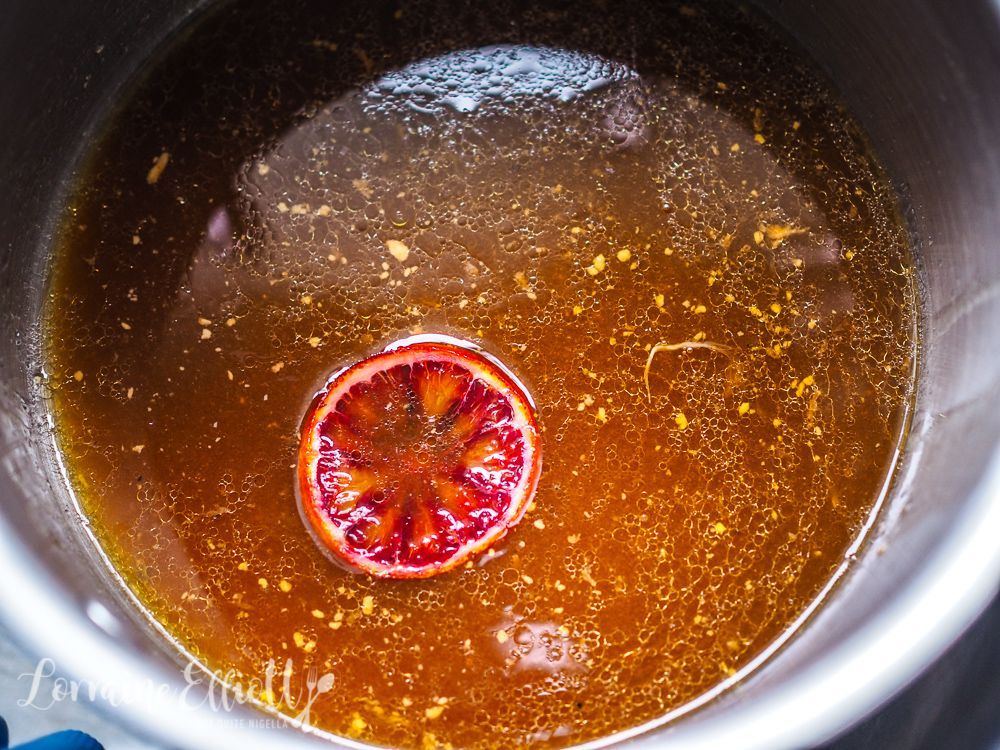 Step 3 - Turn the oven up to 220C/428F and place the blood orange slices on top and roast for 10 minutes until chicken is golden brown. Carefully drain the pan drippings. I got 1.5 cups worth of liquid. Mix the cornflour with 2-3 tablespoons of water to make a slurry and heat the pan drippings and thicken it using the cornflour slurry. 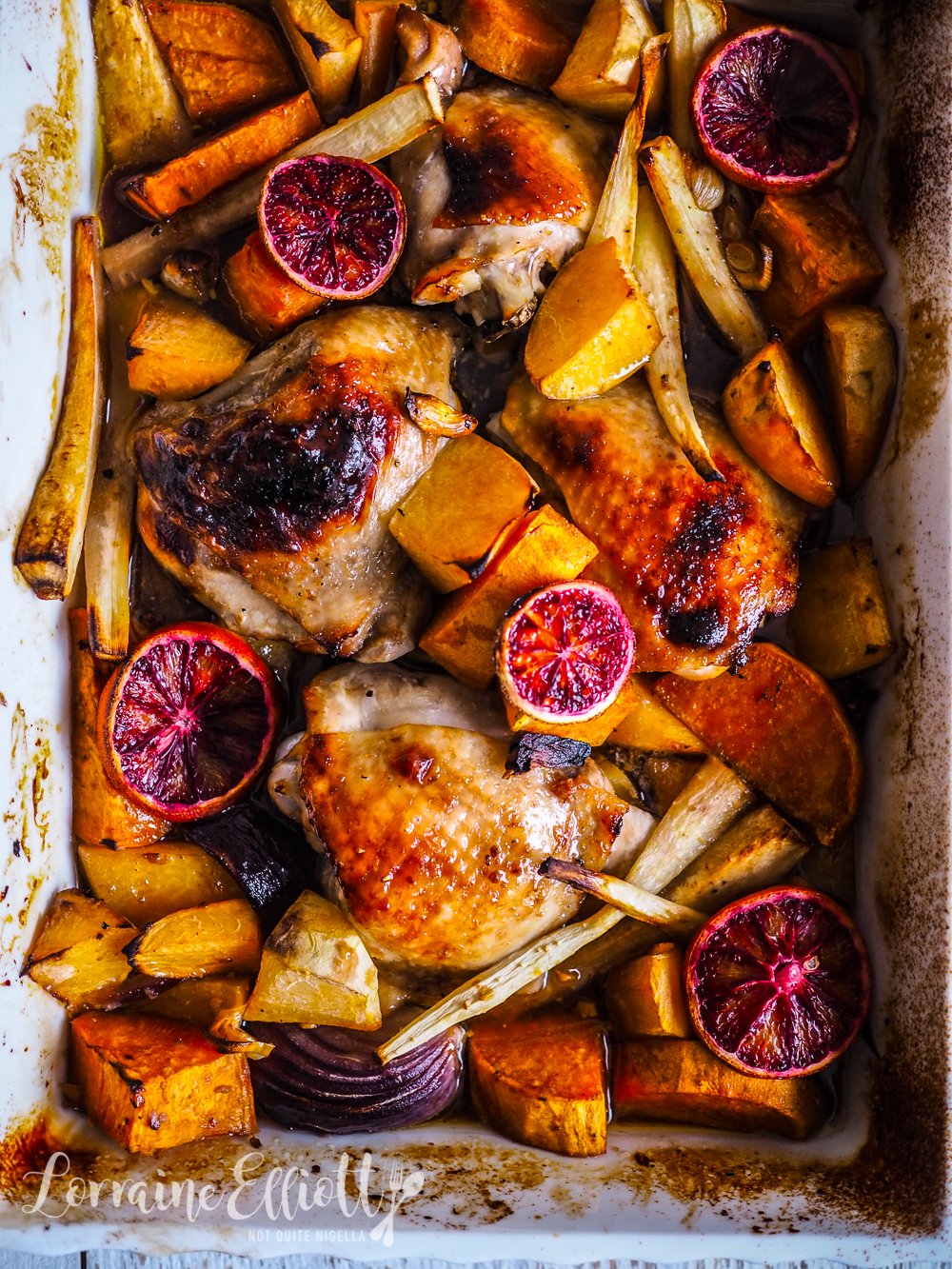