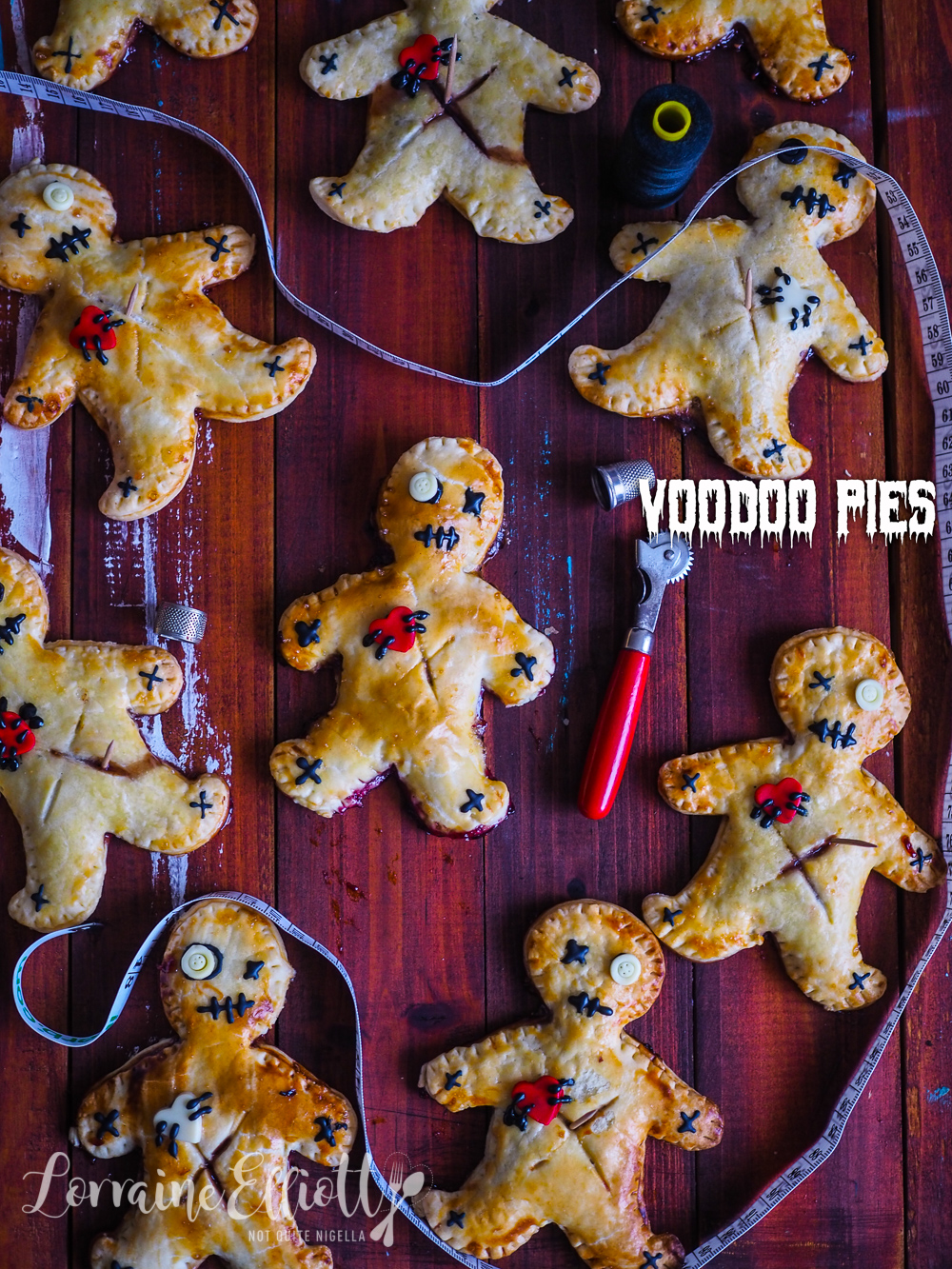 Want to eschew some bad juju? Or is there a vexing soul that you want to teach a lesson? The sweetest way to do this is with these jam filled Voodoo Doll hand pies! Just cut out and fill and bake and watch your cares float away in a sweet, buttery, jammy haze!

These Voodoo Doll pies are some of the easiest and cutest Halloween eats. I have to admit that I tried these with home made pastry and while it tasted amazing, it did become a bit harder to roll and sometimes, when you've got over a dozen Halloween ideas floating around your head, sometimes you go with the path of least resistance.

I remember my visit to New Orleans and seeing voodoo dolls in all shapes and sizes. I've never actually bought one - that's not to say that I haven't hated people or that I'm too nice to buy one. But I prefer to curse people mentally and let karma take care of things. 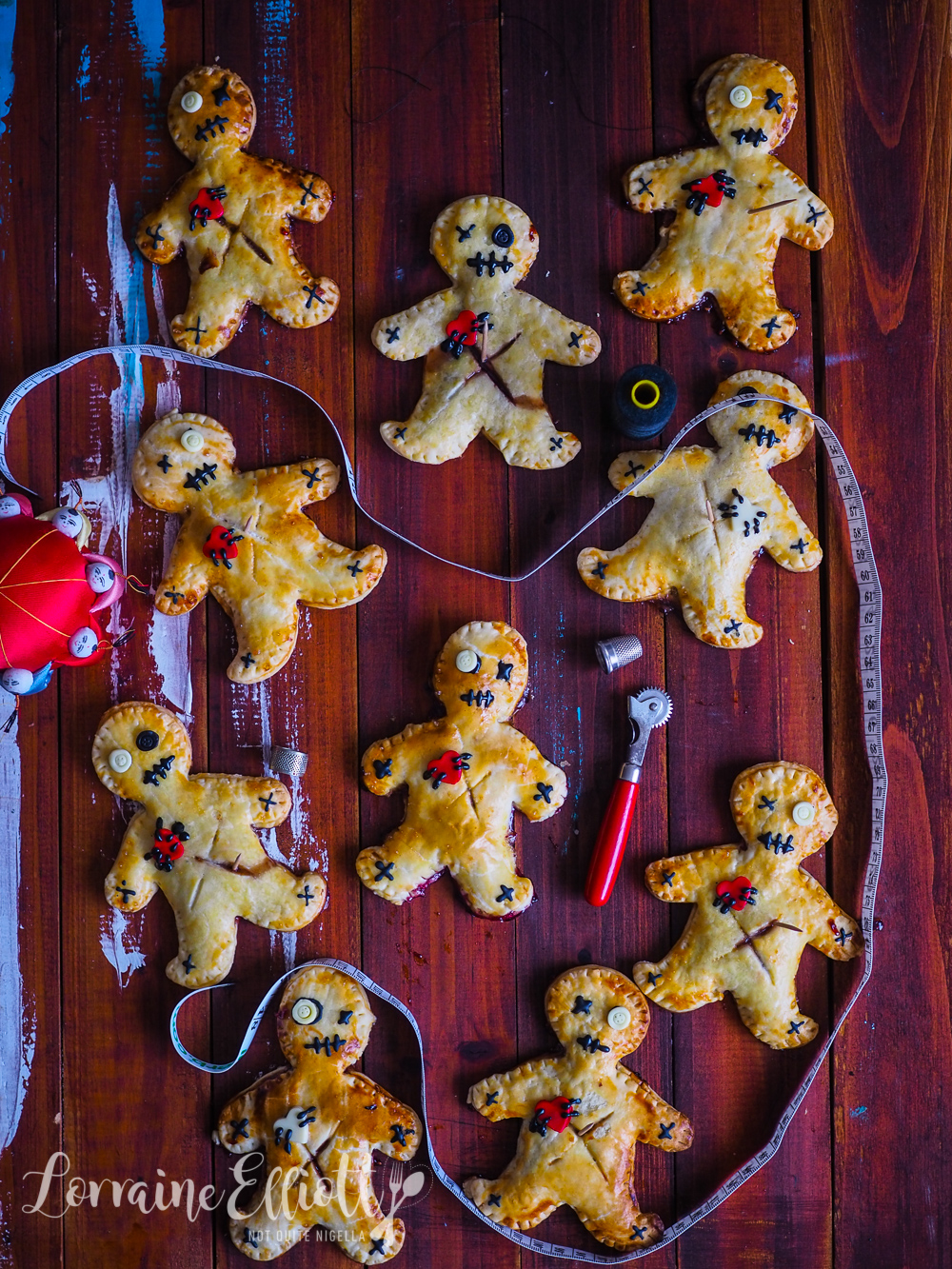 But sometimes you meet some real pieces of work. Last year I met a woman who wore large earrings that read the "C$%@" in large cursive letters. "How edgy!" I thought to myself but I didn't want to make too many prejudgments because friends have worn similar statement jewellery (although not that word and I vehemently dislike that particular word).

But I really should have actually taken her jewellery as a warning statement. It was clear from the start that she wanted to engage in a pissing contest. She worked in food too, previously in Sydney and had moved elsewhere because nobody appreciated her talents. She reeled off a list of all the chefs that she was friends with name dropping faster than a Hollywood Dlister. 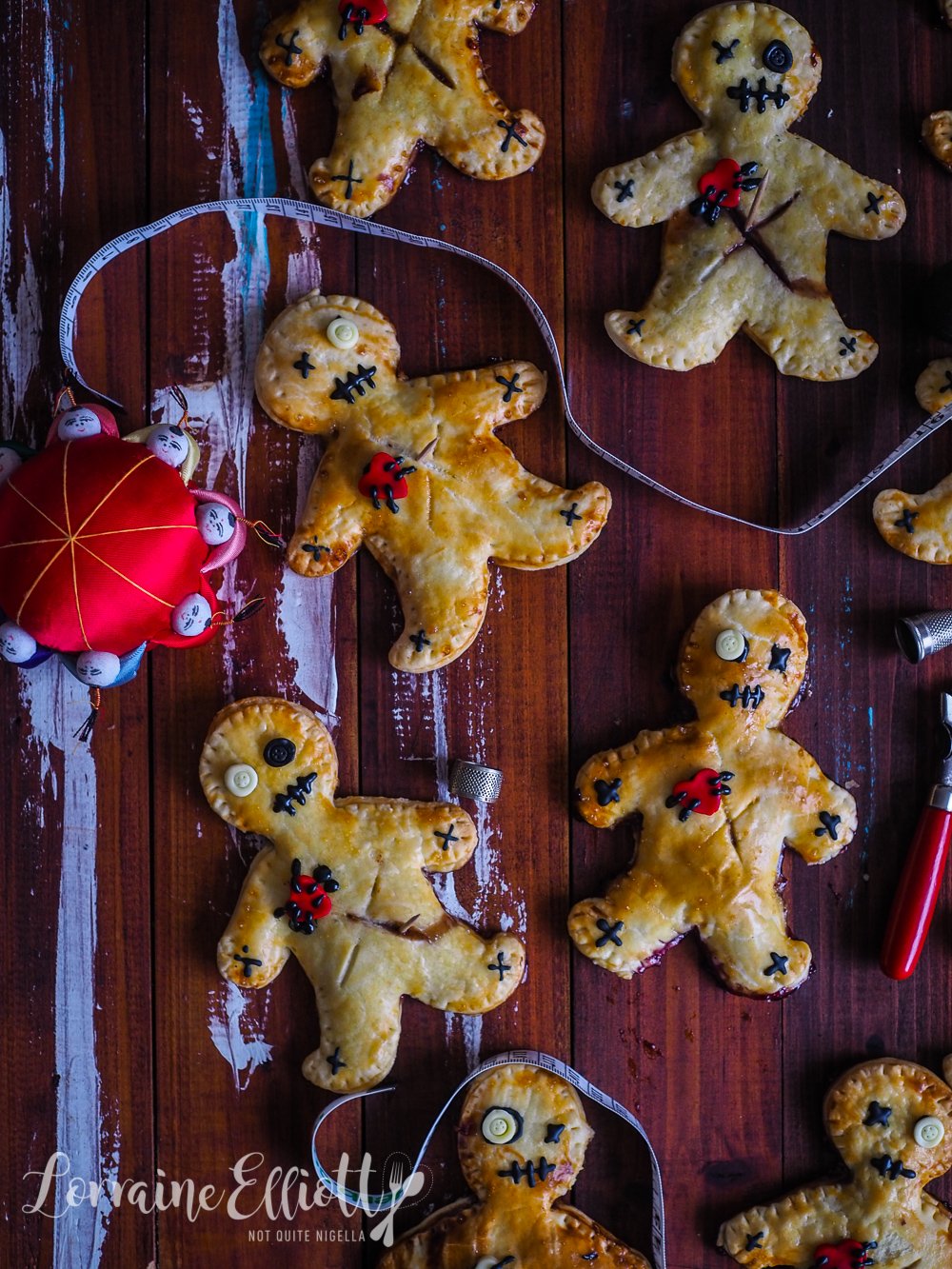 I sat back watching her go on and on - I'm friends with literally only one chef so it wouldn't have been much of a contest and I also felt a bit sorry for this strange smocked woman who seemed so sneering and hostile. We parted ways at the end of the meeting and it became clear that she and I could never, ever work together, nor could I ever expose her to my beloved readers because she was such a toxic individual. I felt the need to scrub myself and get rid of the bad juju that she has transferred onto me. I needed either some fresh air, to go for a run or an exorcism! And yes I should have taken the hint from her earrings!

So tell me Dear Reader, would you ever wear earrings that read the C word? Do you use that word a lot? Would you take that as a warning? Have you ever use a voodoo doll on someone?

Step 1 - Thaw the pastry in the fridge. Line two large baking trays with parchment and cut out 30 gingerbread people using a large gingerbread cutter (you can also do this with small gingerbread cutters but this makes 15 large ones). I wrapped the scraps in plastic and then rerolled them and put them back in the freezer. 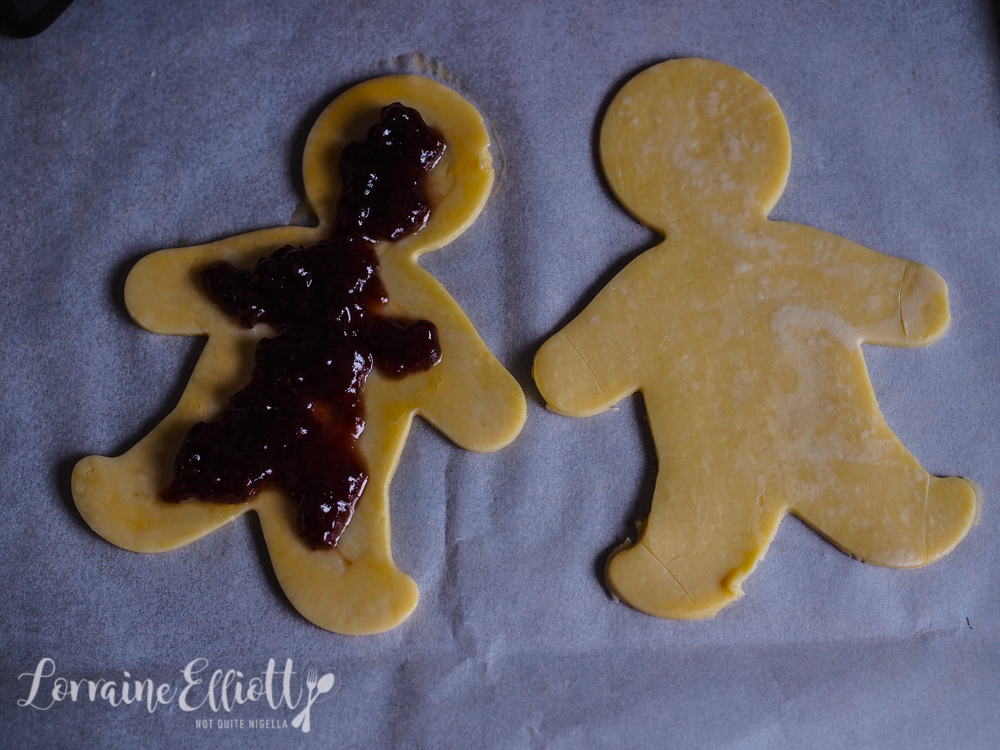 Step 2 - Lay out half of them on the lined trays and brush them around the edges with the egg wash. Fill in the centre with jam (not too much) and then press down the sides. Use a fork to press down the edges and brush with egg wash. Cut an X in the centre of the belly area. Place in the fridge for 20-30 minutes. Preheat oven to 190C/380F and bake for 20 minutes or until golden. Cool. 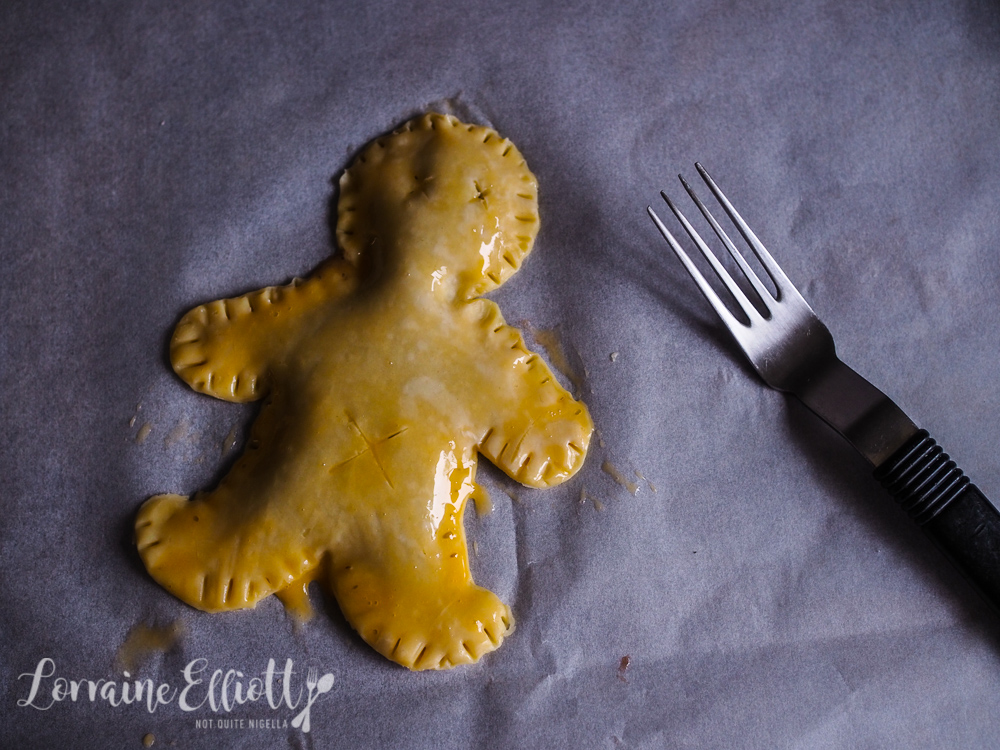 Crimping the edges with a fork

Step 3 - While it is baking make the button eyes. Roll out the yellow or black gum paste on a non stick chopping board and use cutters-I actually used a large bubble tea straw and a regular straw. I used a toothpick to prick 4 dots in the centre. Allow to dry. Then shape red hearts using a very small cutter and dry. 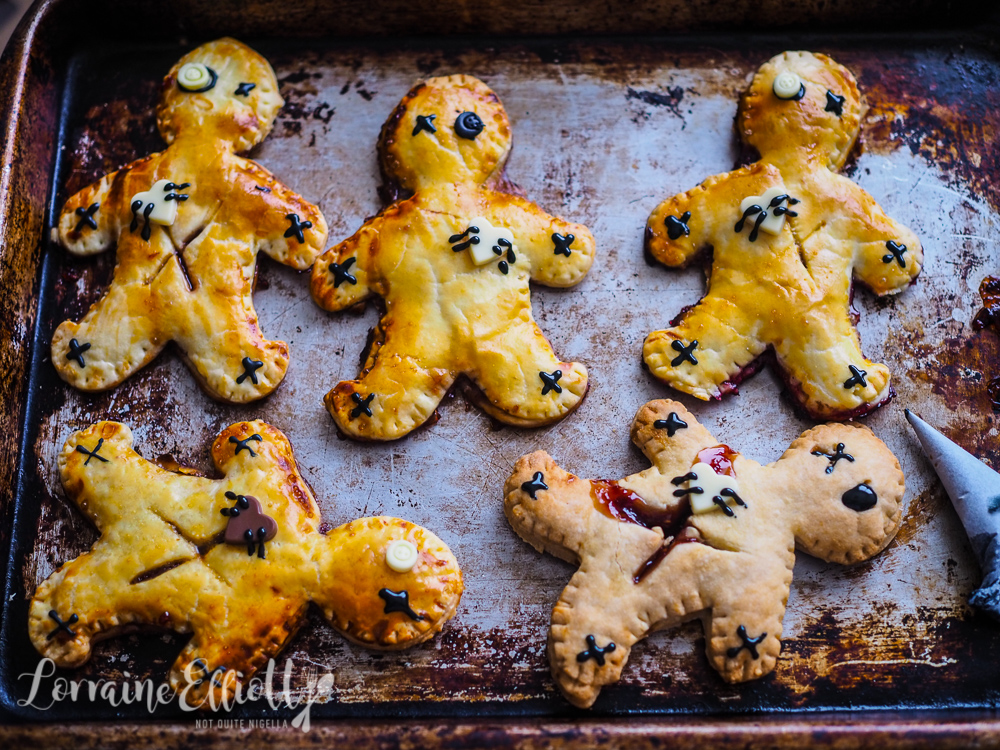 Step 4 - Mix the royal icing with the colouring and place in a small piping bag and snip a very small hole in the end. Draw X's on the hands and feet and then use a royal icing blob to affix the eyes and heart (one eye could also be a cross). Pipe stitches around the heart and allow to set completely. Break toothpicks in half and insert into the dolls. 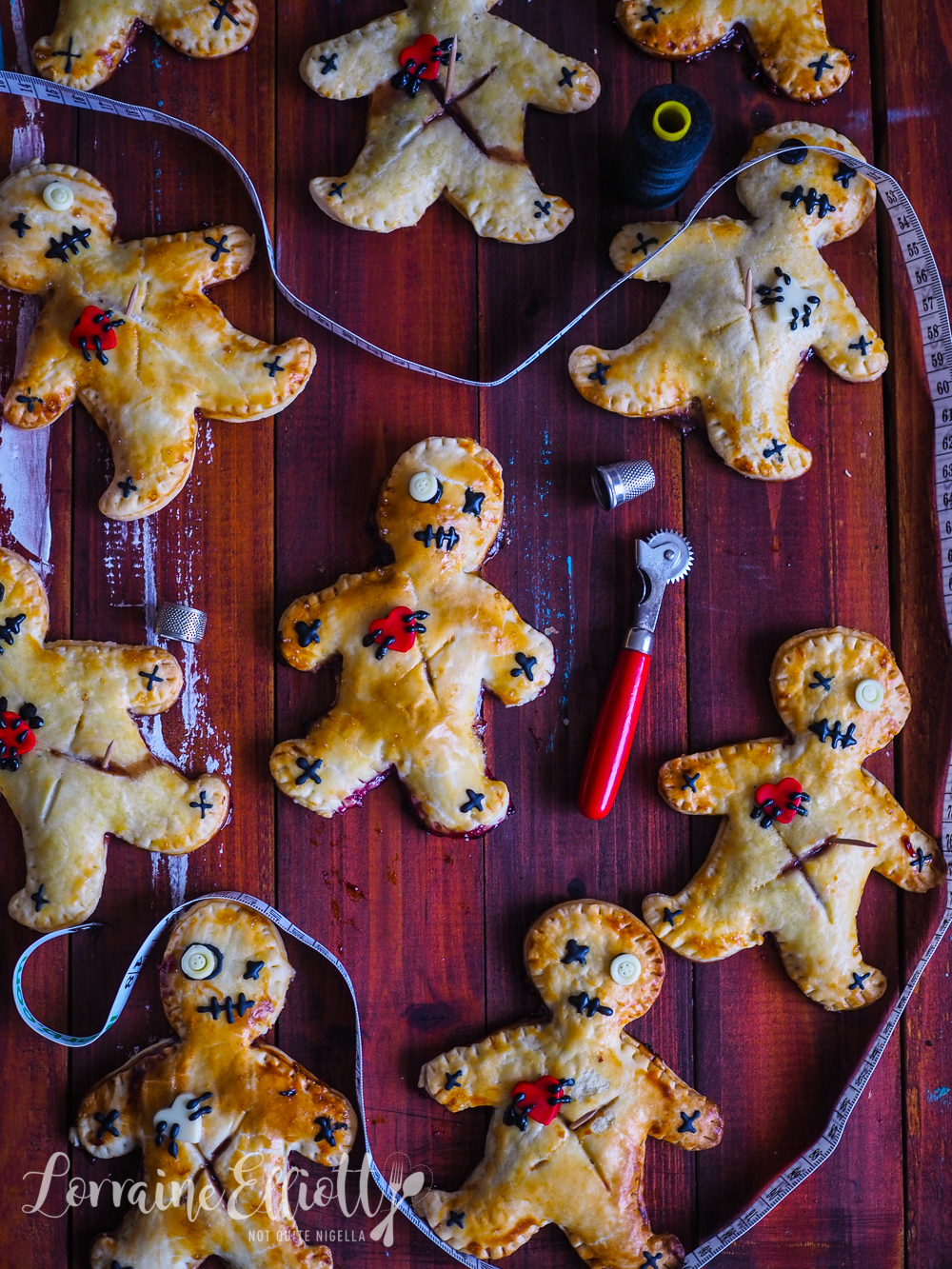