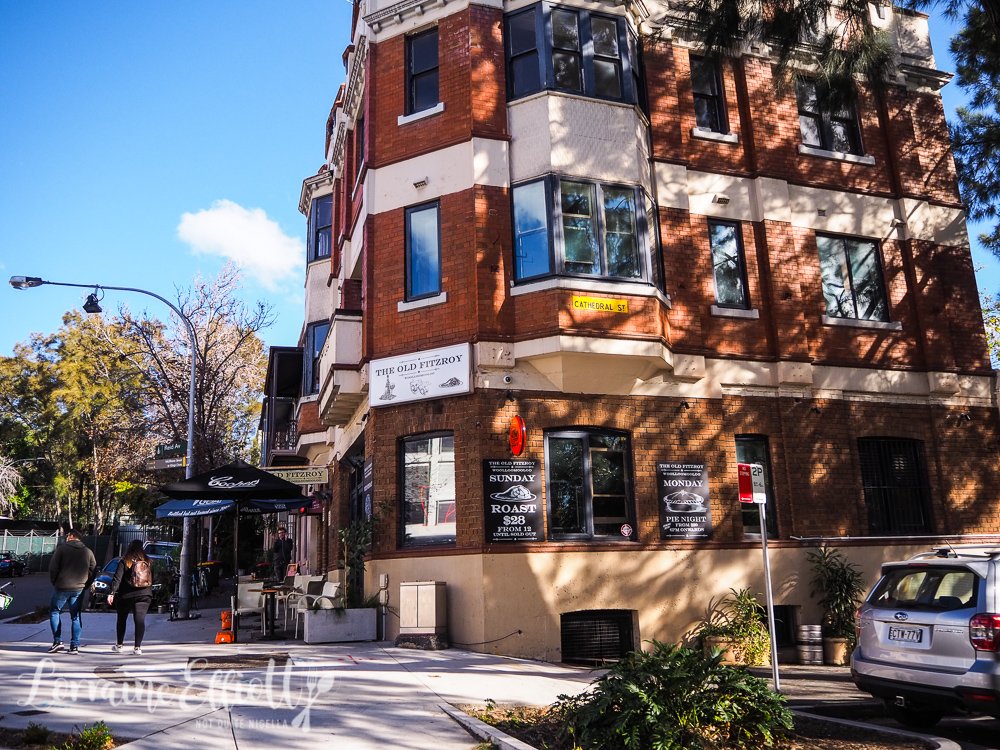 Since March this year all's new in the kitchens at The Old Fitzroy Hotel in Woolloomooloo. Under a star chef comes new buzz with a cut above British pub food and a nose to tail menu. Scotch eggs, schnitzels and hot chip buttys are given a contemporary makeover while the pub itself remains true to its roots. 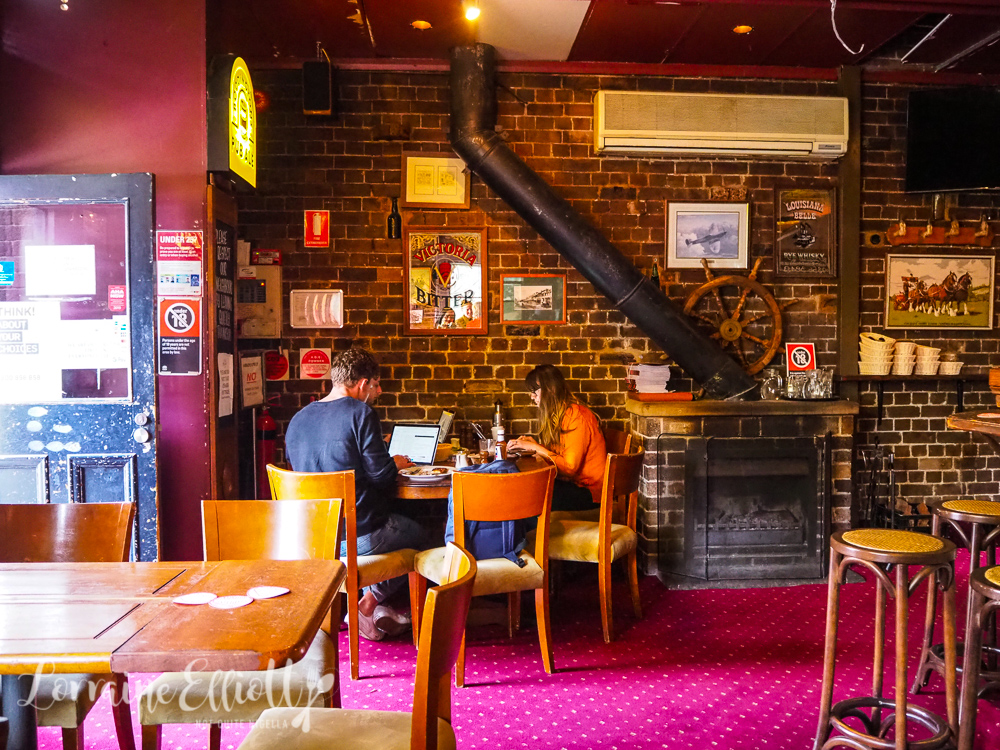 The Old Fitzroy pub is in the backstreets of Woolloomooloo on the corner of Dowling and Catherdral streets and has an adjoining theatre called The Old Fitz which is still in operation. The pub itself was first established in 1860 and has been taken over by the group that revamped The Duke in Enmore and The George. 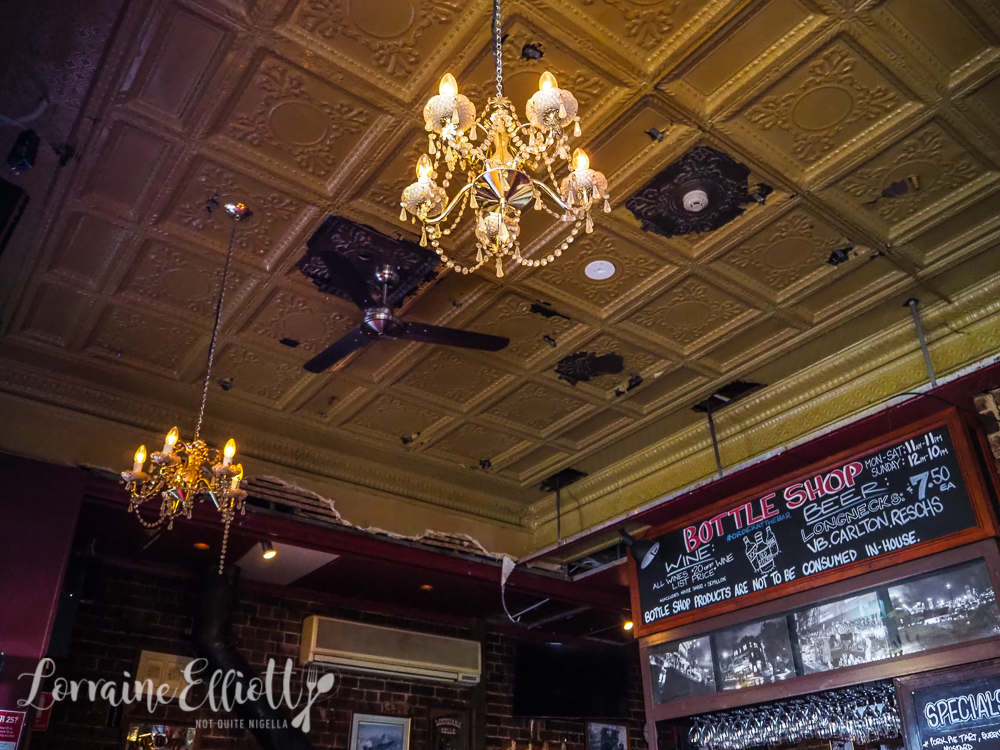 Chef Nicholas Hill is from Sepia and Quay so it was never going to be ordinary pub food. It's British but with some St. John thrown into it as well. Take a note of the specials board - this is the where the pie of the day is featured and it could be anything from a veal neck and sweetbread pie to a roasted chicken and artichoke pie with the chicken legs protruding. And I'm willing to bet that you could literally throw a dart at anything on the menu and it will be delicious. 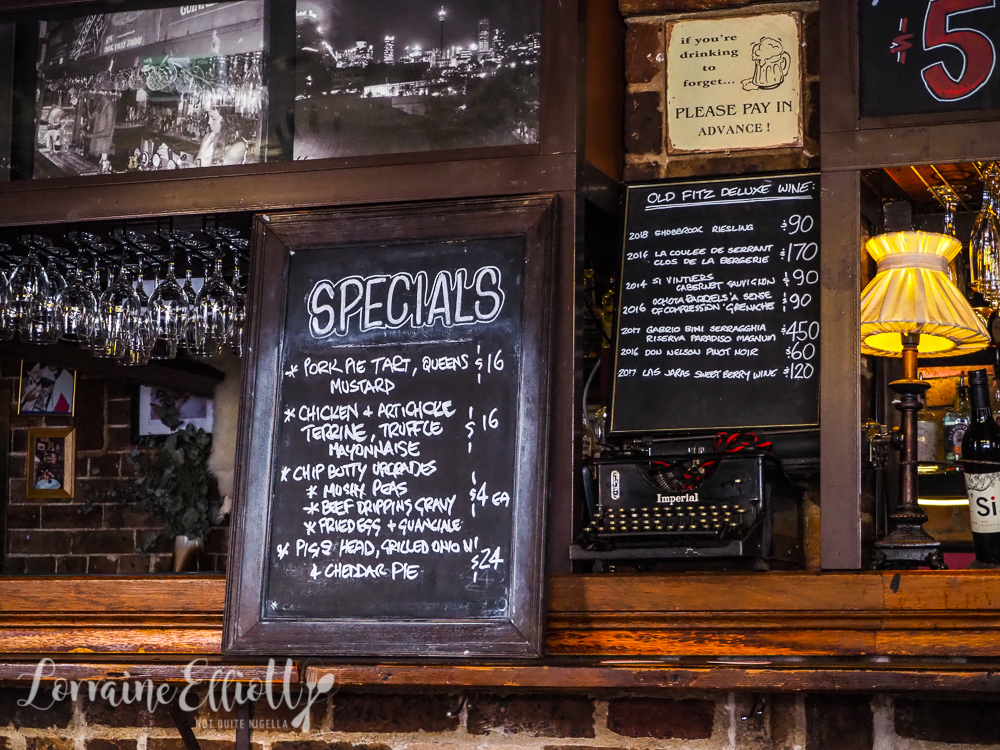 Monica brings a foodie friend of hers called Mel along and this is our second attempt at getting here (the first one was on a Tuesday but the kitchen isn't open then). There's an upstairs and garden area but we take a seat in the front room which is where you order. There's mulled wine brewing although this isn't quite finished by the time we order so regrettably we have to give it a miss. The staff are really lovely and welcoming here. 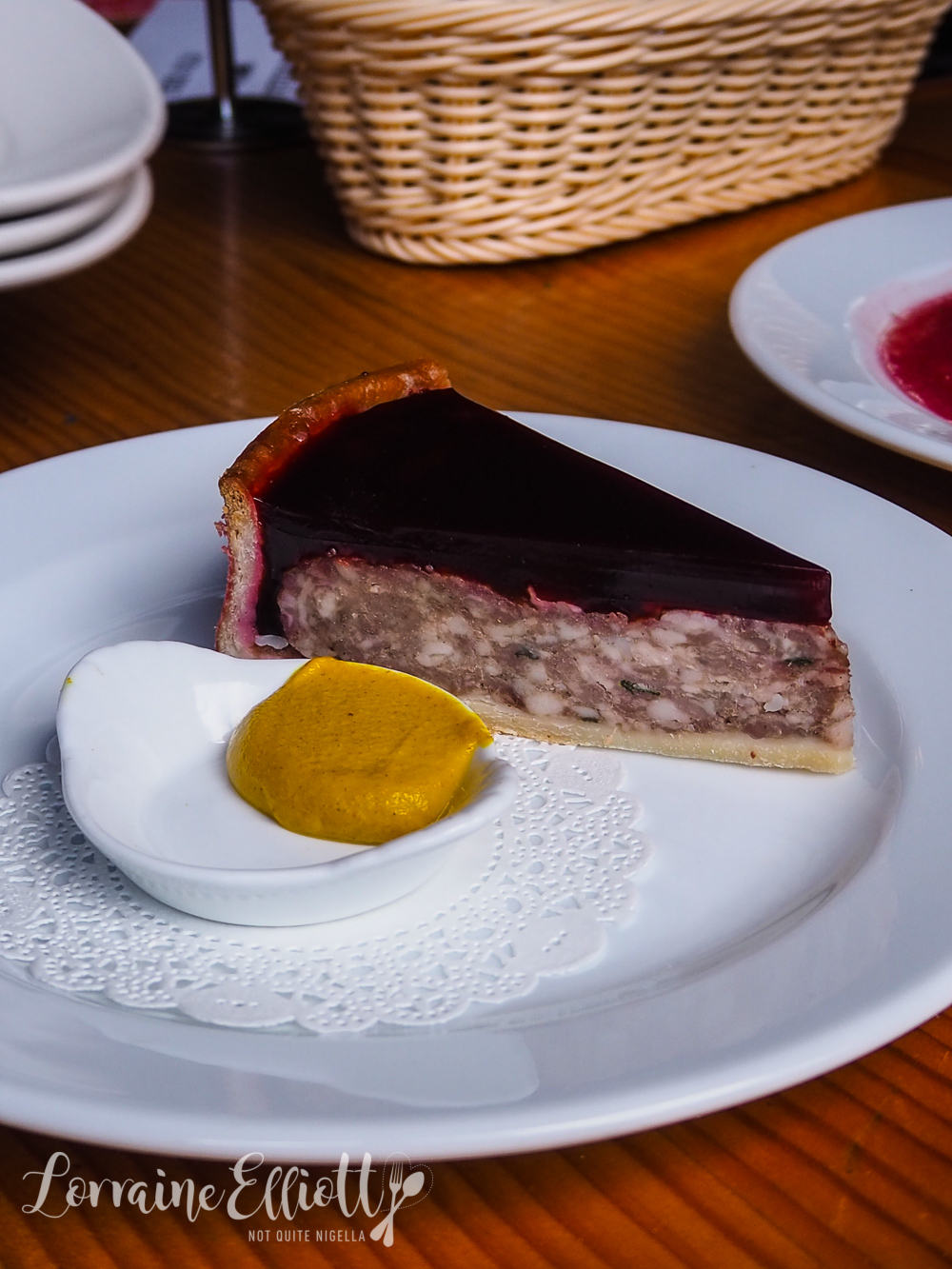 I hold pork pies to a really high standard having devoured the one at Ye Olde Pie & Sausage Shoppe in York which was absolutely delightful. But comparison is hard as this is different as it's a pork pie tart. Yep a tart with a lard pastry, gorgeous spices and a layer of Branston pickle jelly on top. It comes with a lick of hot Queen's mustard and it's one of our favourites. If anything the openness of the tart helps because sometimes pork pies can be a bit thick on pastry (and that's coming from a pastry enthusiast). 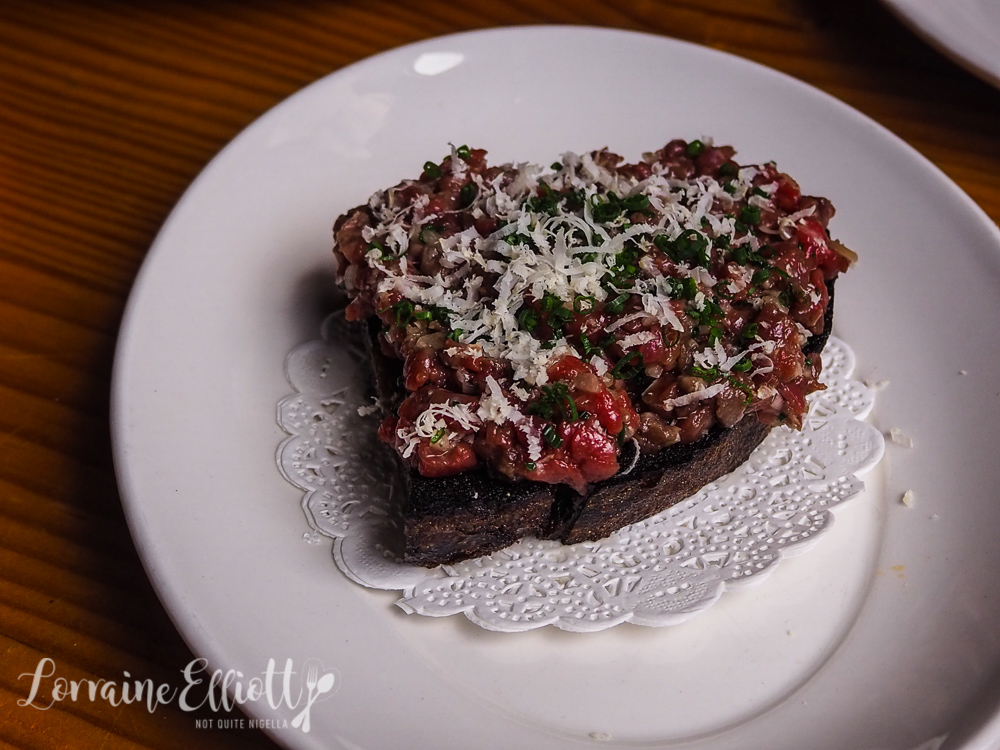 This was the first thing that Monica focused on. The raw beef is finely chopped and seasoned beef not unlike a steak tartare on a piece of crunchy toast. We get that telltale beef dripping flavour right at the end of every bite. 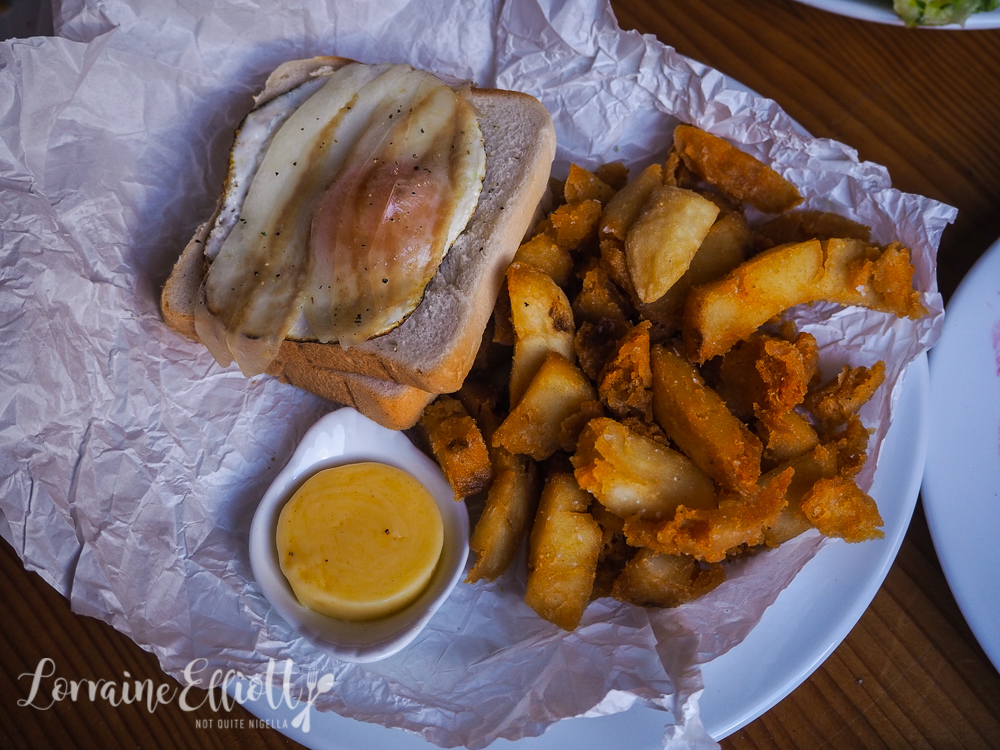 My friend Miss America used to wax lyrical about chip buttys with a thick slather of butter and a filling of hot chips in white bread. The chip butty here has some upgrade options. There are three to choose from the natural choice for us is the fried egg and guanciale. 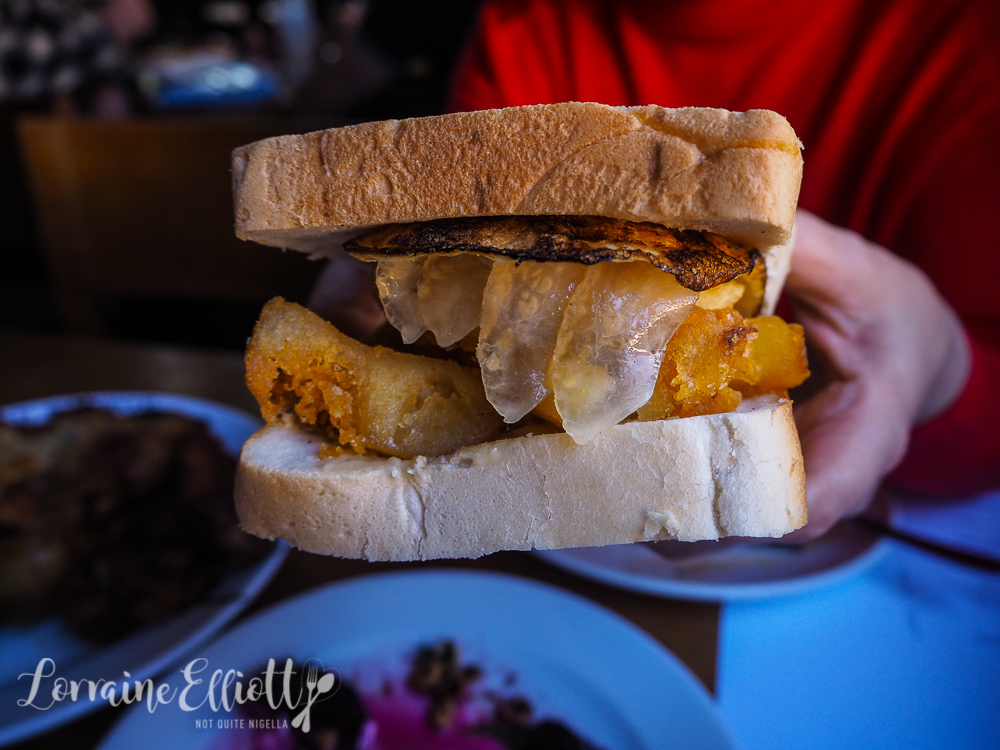 The DIY chip butty comes with two thickish pieces of bread, a fried egg, slices of guanciale (pork jowl) and a pile of the best chips ever. In fact I'd like all my chips to be like this from now on. They're so crispy and crunchy in every bite and is dare I say what lesser chips strive for. The whole sandwich with the upgrade is rich - I'd suggest perhaps sharing this with someone else because I don't think I could finish a whole one. Or perhaps it's because we pretty much ordered everything on the menu. 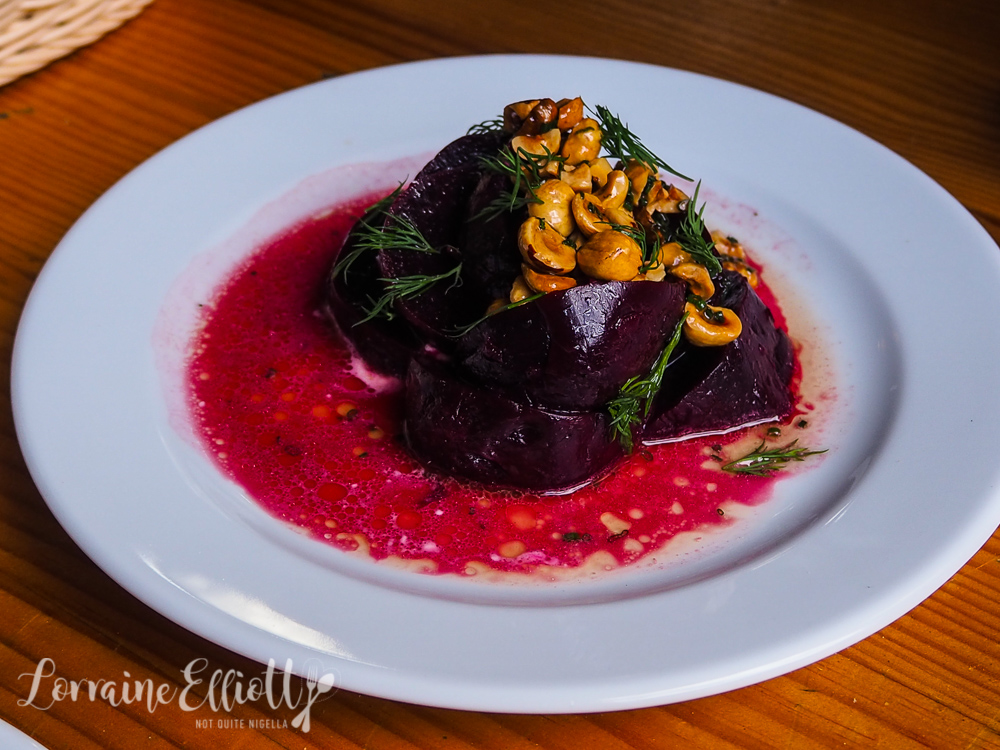 Because what we ordered was quite rich, a salad was in order. The roasted beetroot salad is dressed with a vinaigrette and sits on a bed of horseradish cream with roasted hazelnuts. It does it's job of cutting through the rest of the richer dishes. 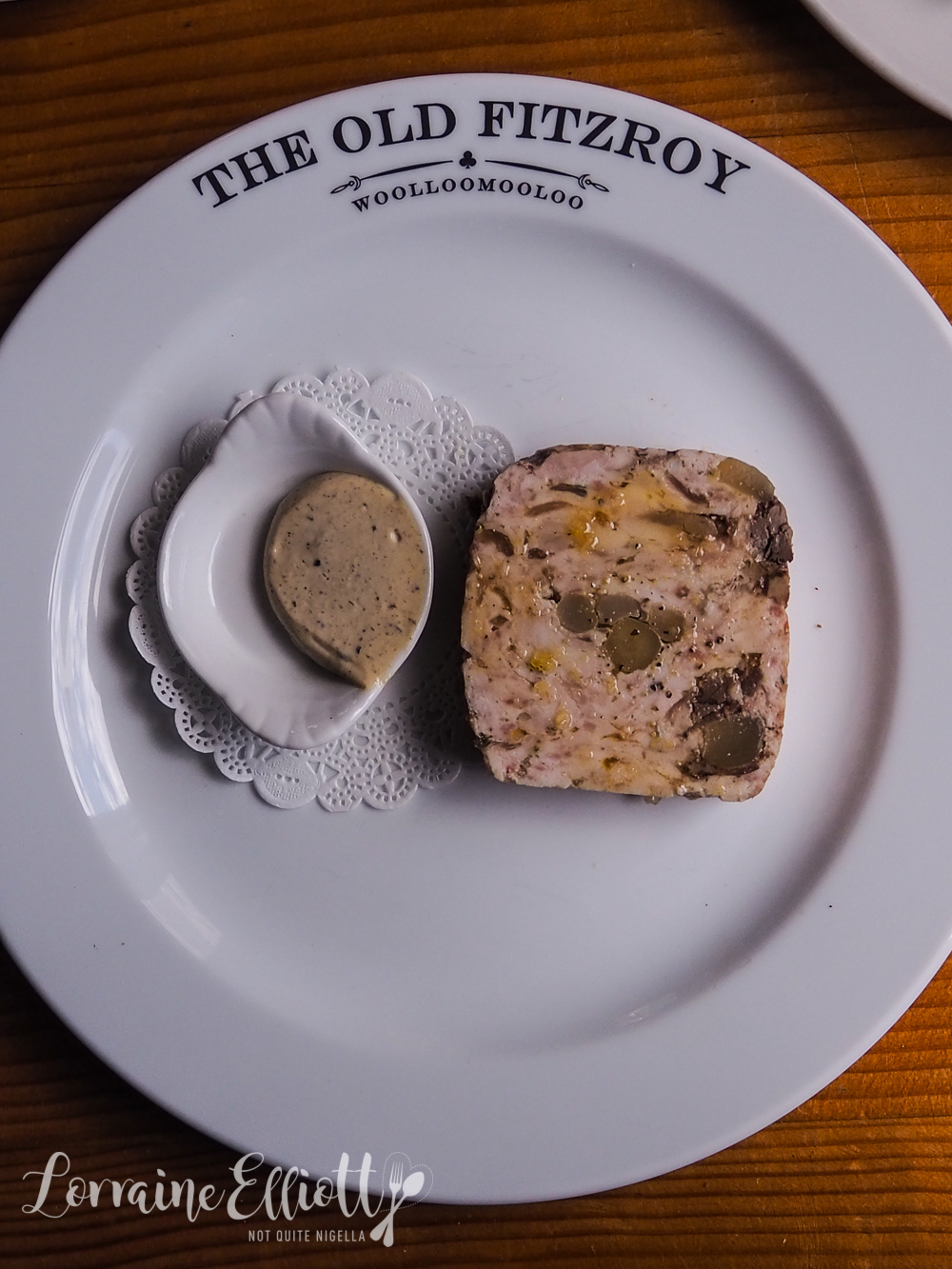 The terrine comes with buttered rye toast slices in a toast rack. The chicken and artichoke terrine has what tastes like pickled artichokes and is paired with a truffle mayonnaise which is good albeit quite light in truffle. This is a favourite of mine although Monica notes that it is milder in flavour than the other items. 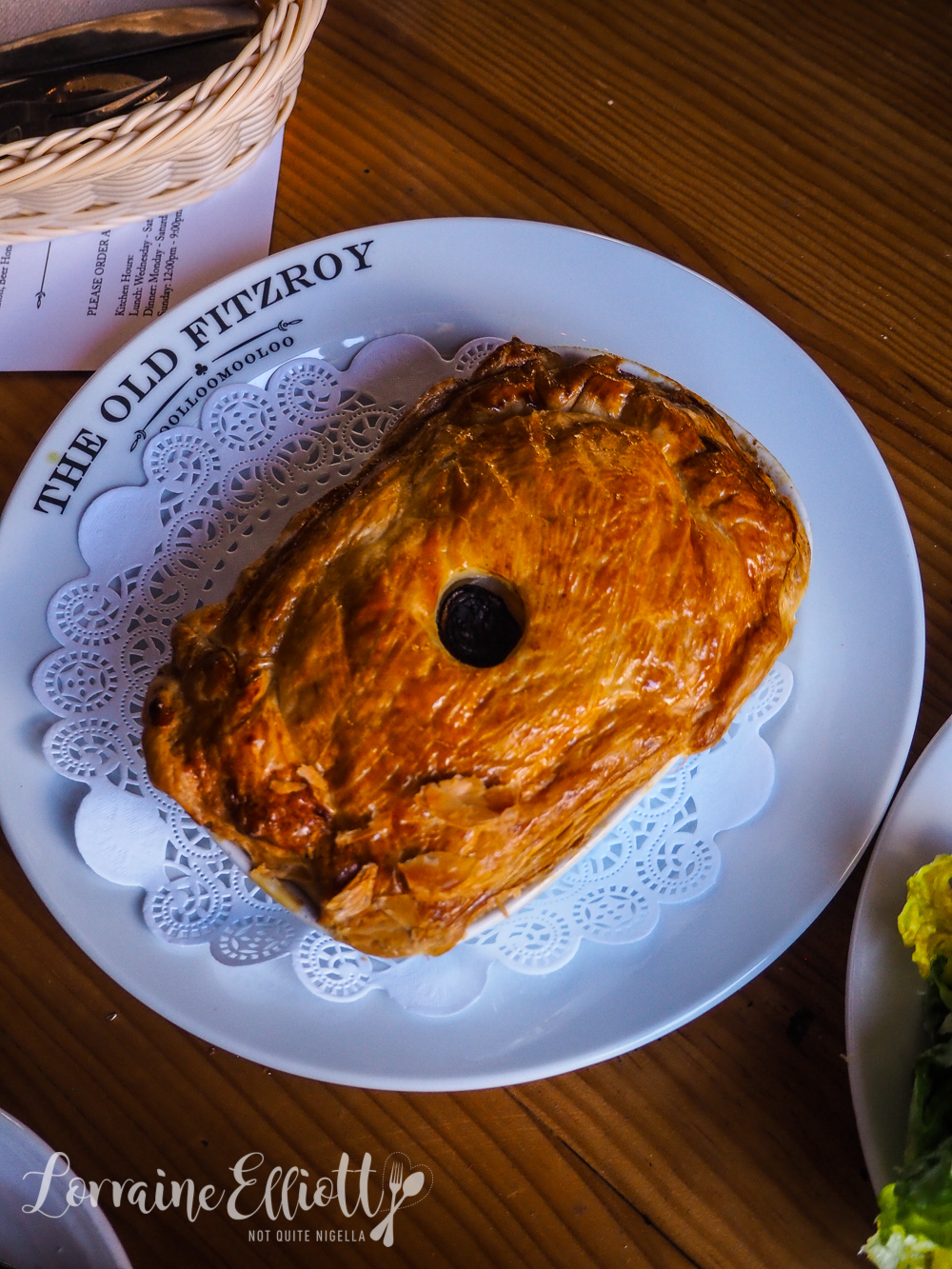 The pies change frequently and the Morticia in me was hoping that it would be the chicken pie with legs sticking out. But the pig's head pie is no second prize. It's a large pie ideal for two people with a tall, layered puff pastry top and is filled with rich and gelatinous pig's head meat, grilled onions and cheddar. 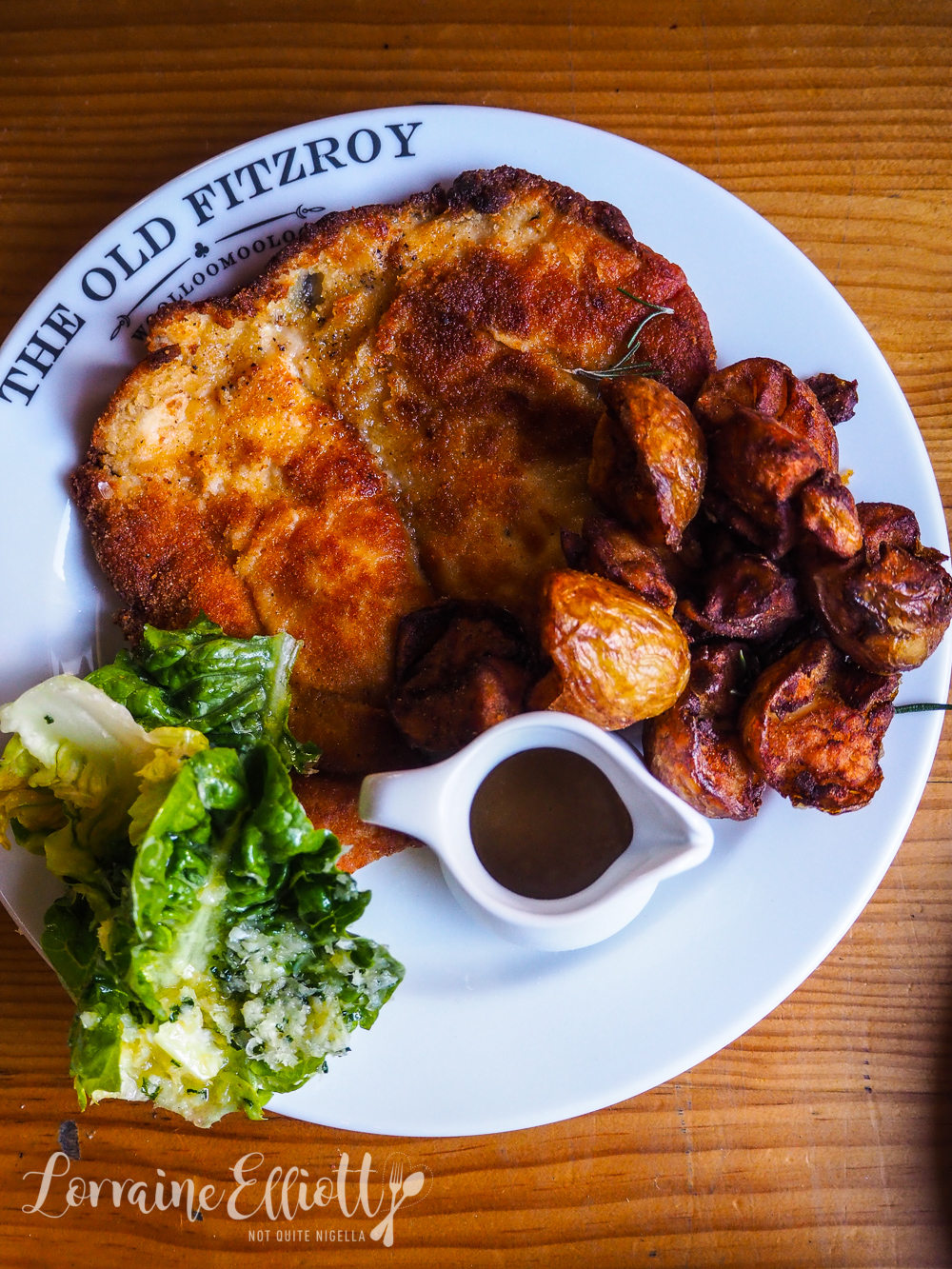 My heart is also won by the schnitzel with dressed gem lettuce and roasted chat potatoes (although I think I'd prefer this with more of those amazing chips). It's a moist breast schnitzel with a seasoned crumb so that even without the gravy it has a strong chicken flavour to it. However with gravy this good why wouldn't you have every bite with gravy? My only gripe? More gravy please because gravy is life. Or perhaps that's just me. 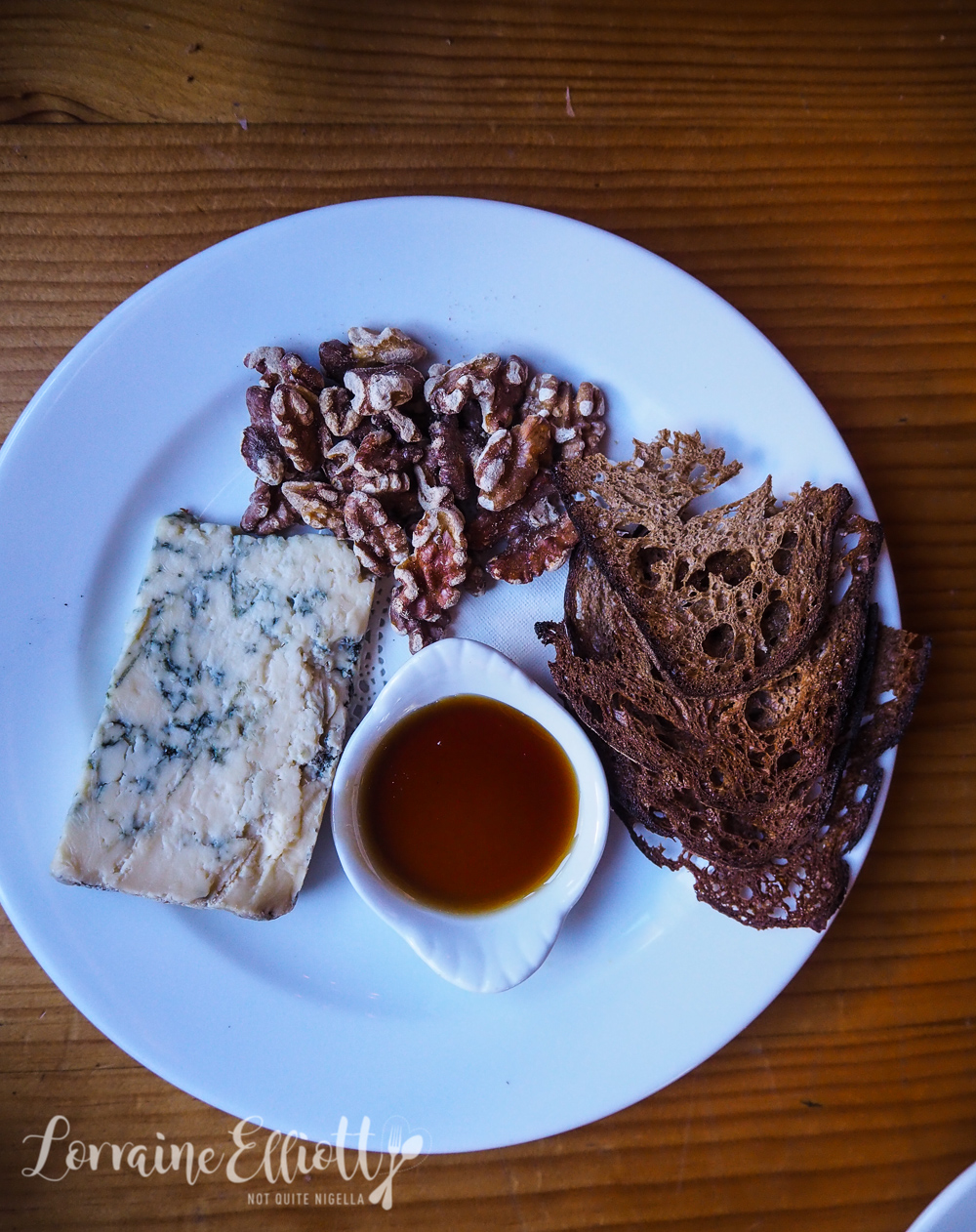 There are two desserts on the menu-the cheese plate is one of them with a slice of Stilton cheese, walnuts, thin rye toasts and a pot of beer honey which has just the right amount of malty beer flavour to it. 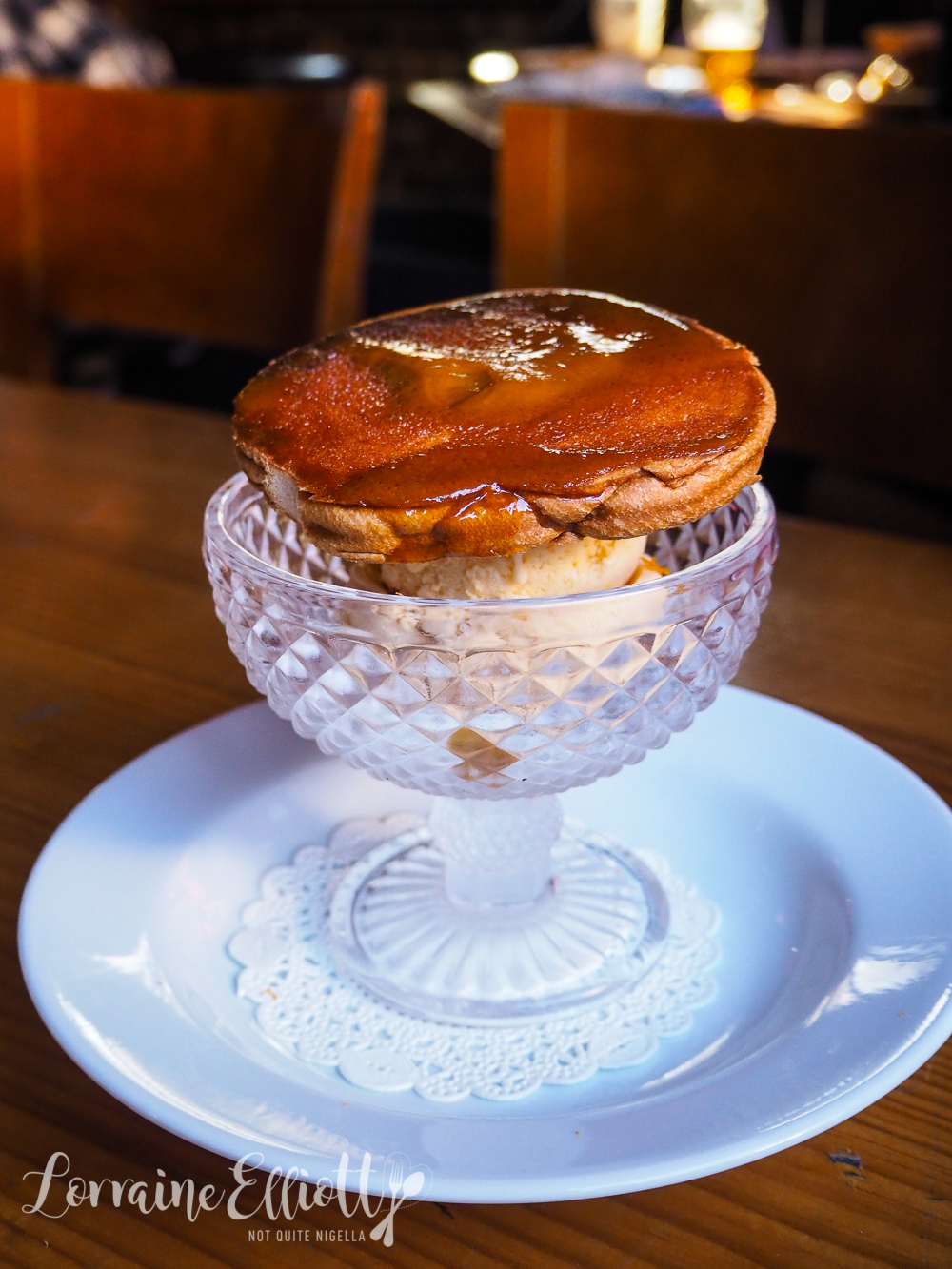 While the other dessert is a scoop of creamy marmalade ice cream with tiny flecks of orange zest throughout it. On top is a round of white bread butterscotch toast. It starts a conversation among us about who loves marmalade vs who doesn't. Such a food enthusiast conversation! 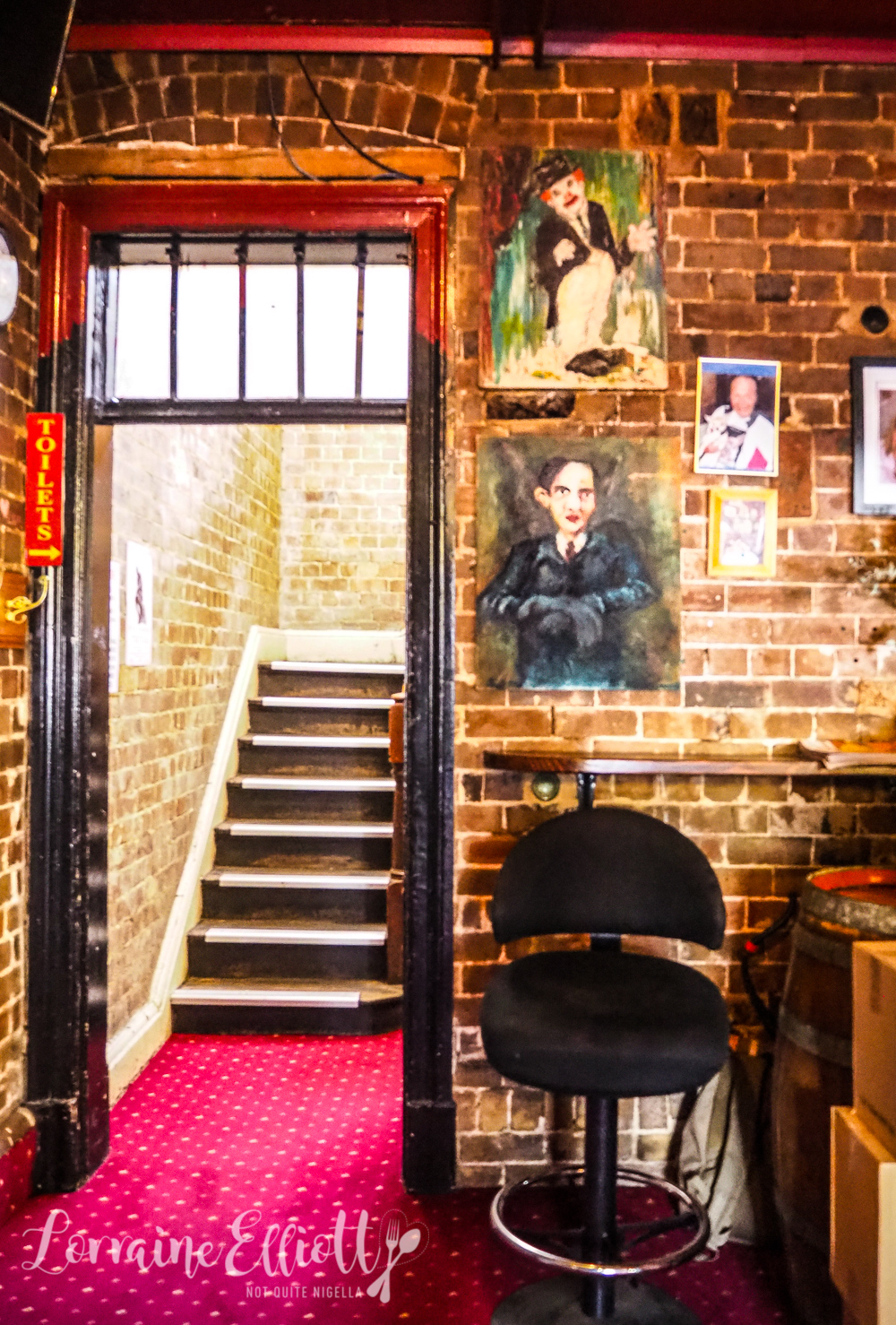 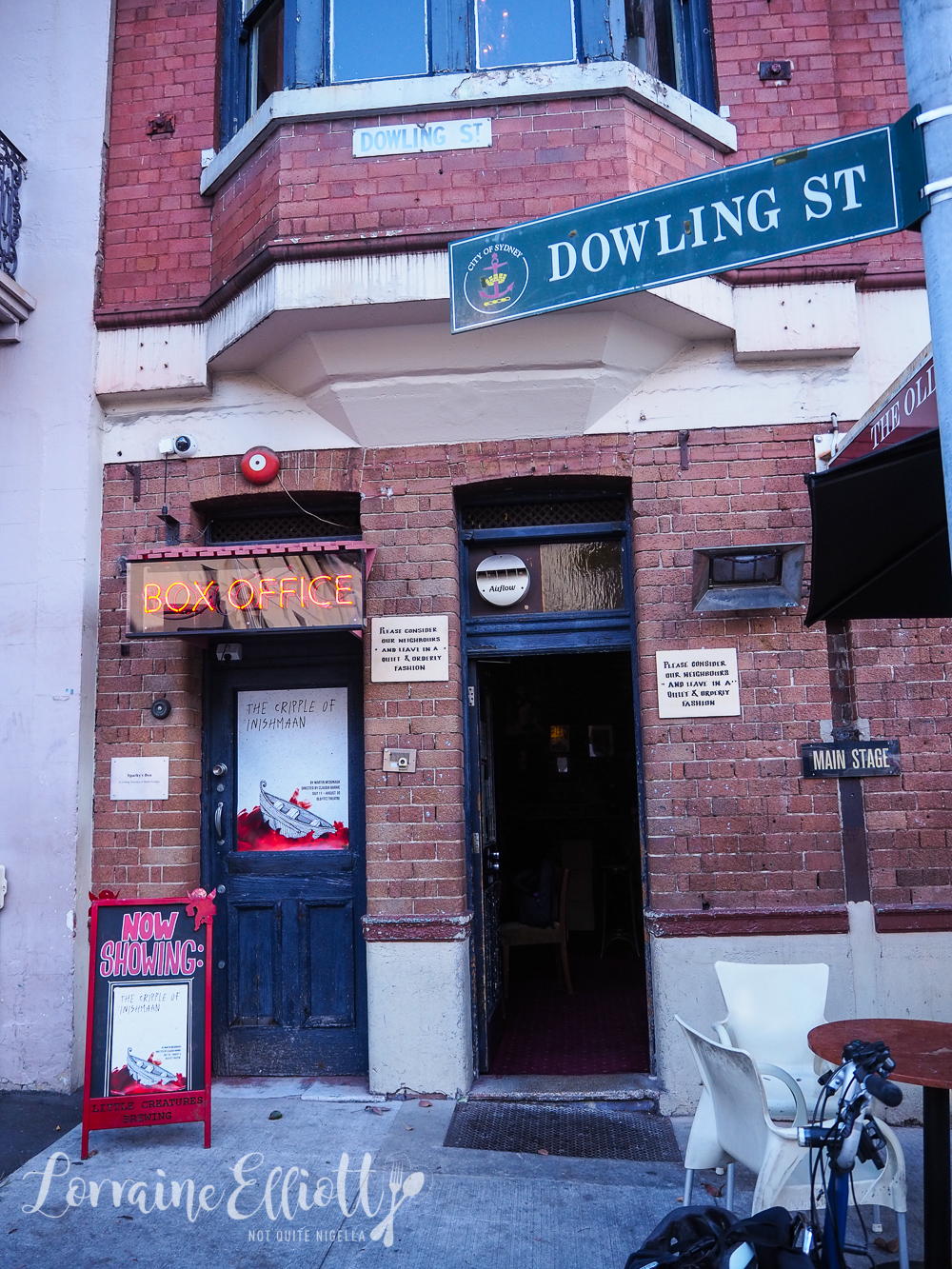