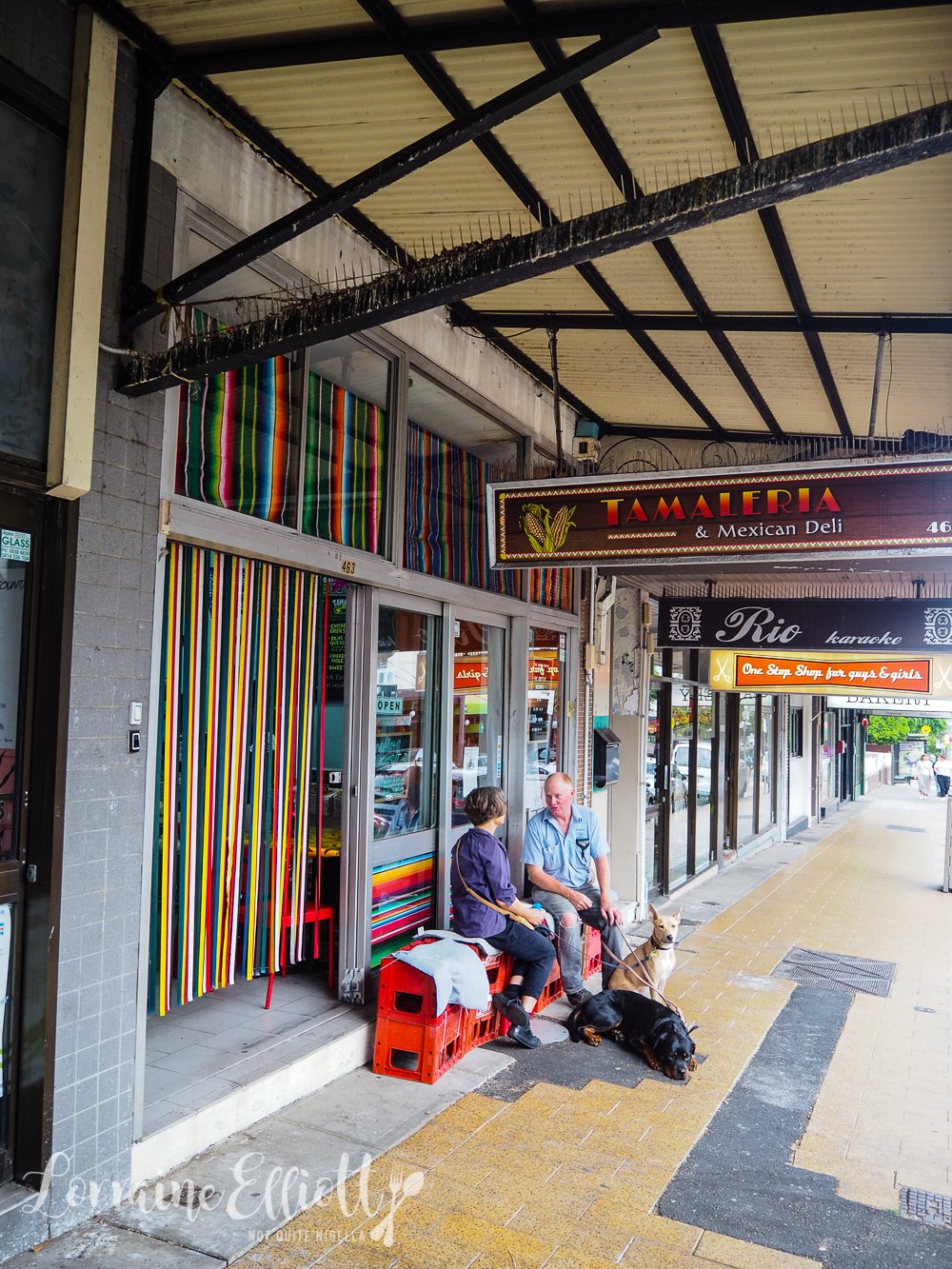 Authentic Mexican in Sydney? At Tamaleria & Mexican Deli in Dulwich Hill, it is as much as a place to buy Mexican ingredients as a place to eat in. Eat your fill of gorditas, tlacoyos and two styles of tamales along with nachos and tacos all at very reasonable prices! 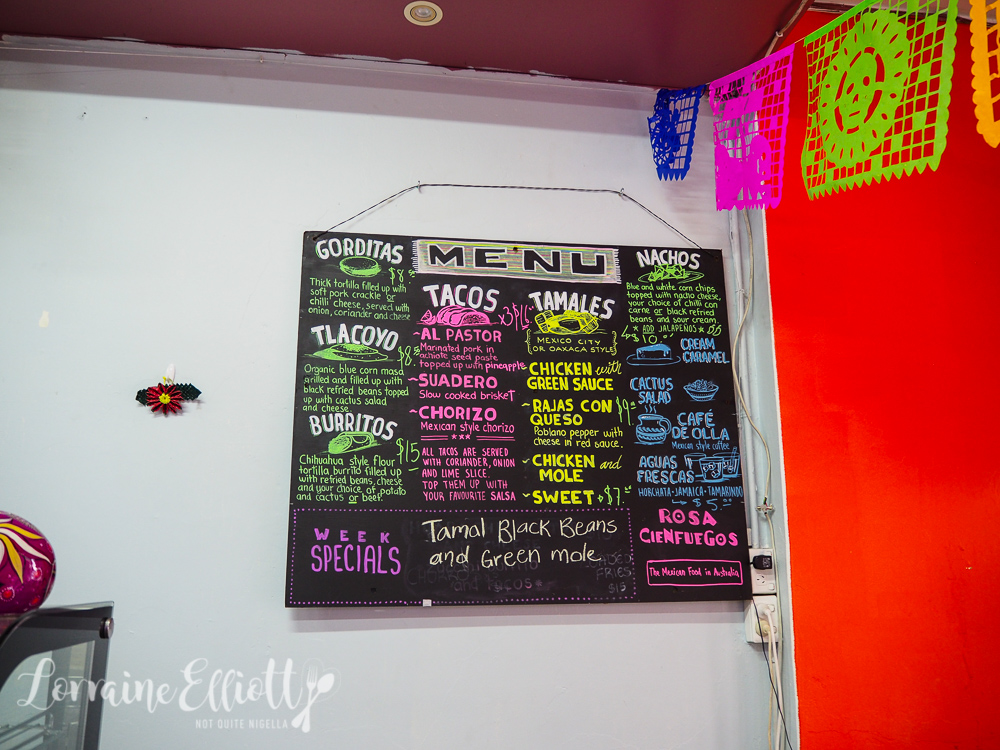 The last time we tried to go to Tamaleria and Mexican Deli we arrived at 5pm on a Saturday with Ivy and Ryan and they were closing. Since then they seem to have expanded their opening hours. 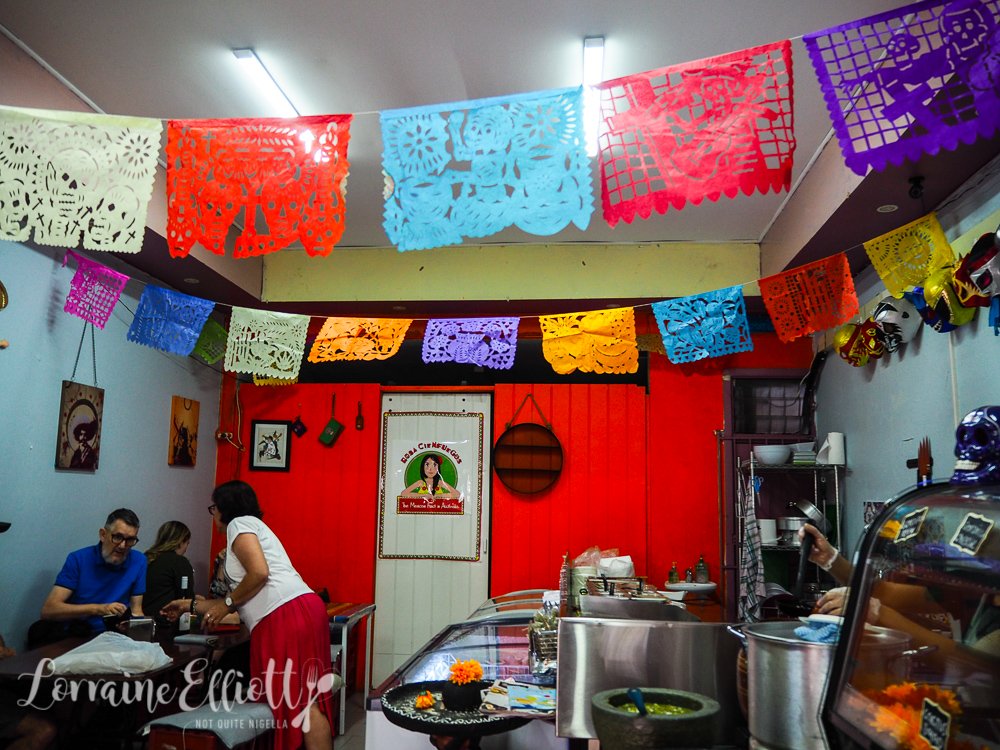 This time we are going with Valentina and Peter. They had recently bought some takeaway from there and enjoyed it. Valentina has booked a table because she knew that there are only three tables. 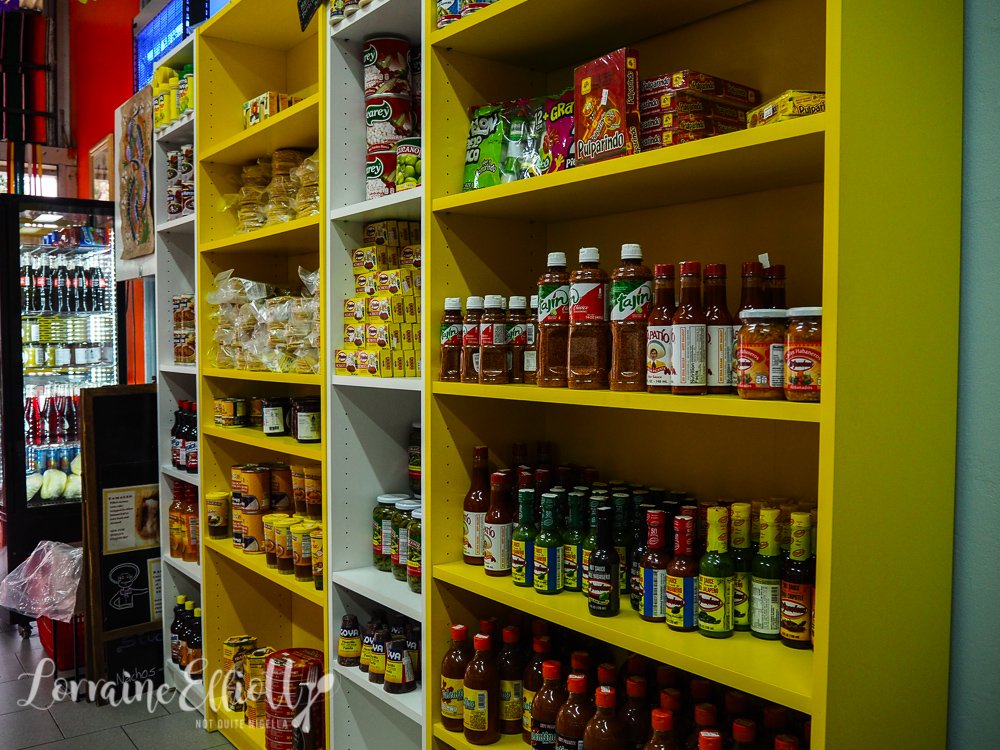 Except that this booking seems to have disappeared and she has to do some sweet talking to get our table. Service is sweet but quite unsure about things and the woman that owns it Rosa Cienfuegos, whose face adorns the logo isn't there. She arrived in Australia from Mexico City in 2009 and worked with her father at his restaurant El Cuervo Cantina in Enmore before opening this up. 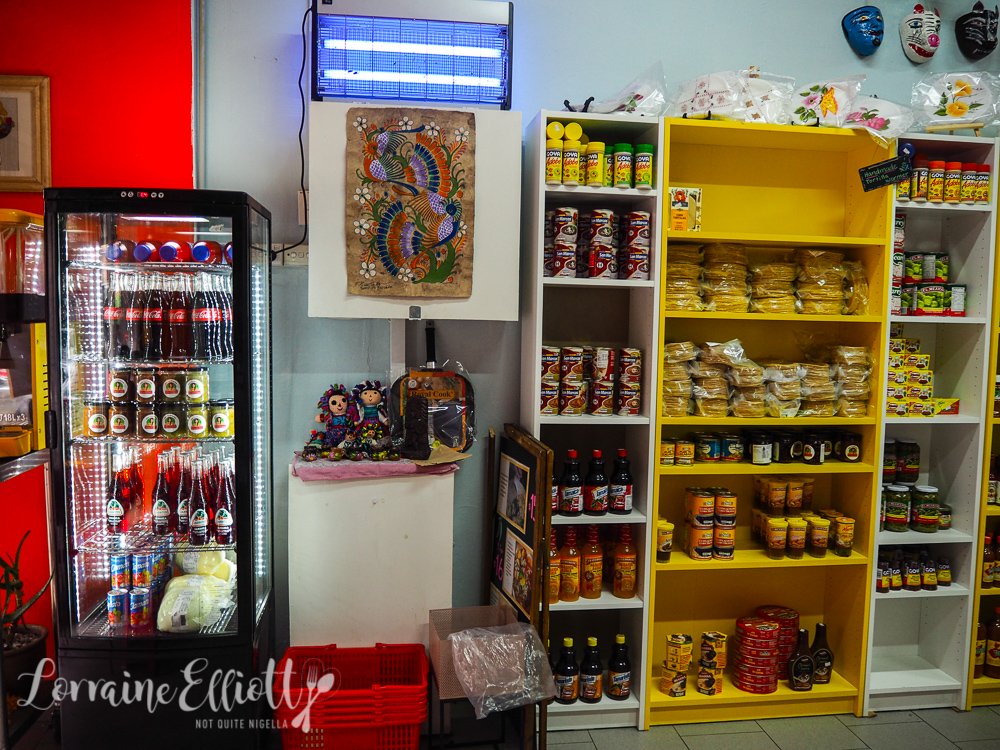 There are shelves of Mexican ingredients to buy from sauces to tinned items to drinks and cheeses. 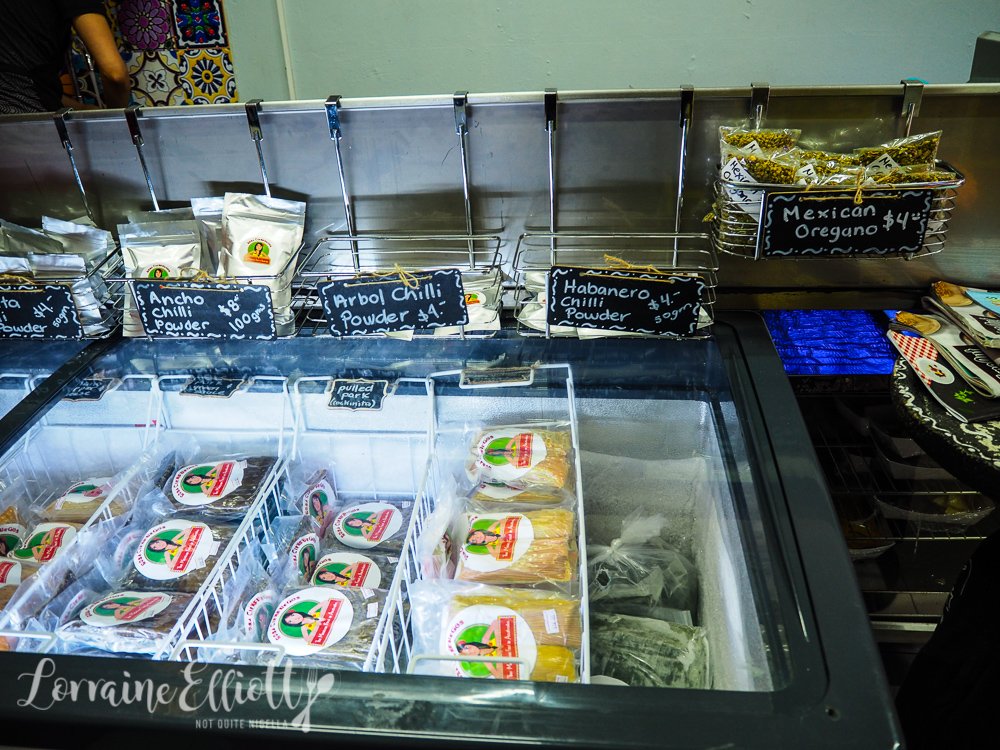 There are also freezers with lots of ready made items from tamales to chorizo and other meats. Near the counter are baskets of Mexican chillies and corn husks to make your own tamales. 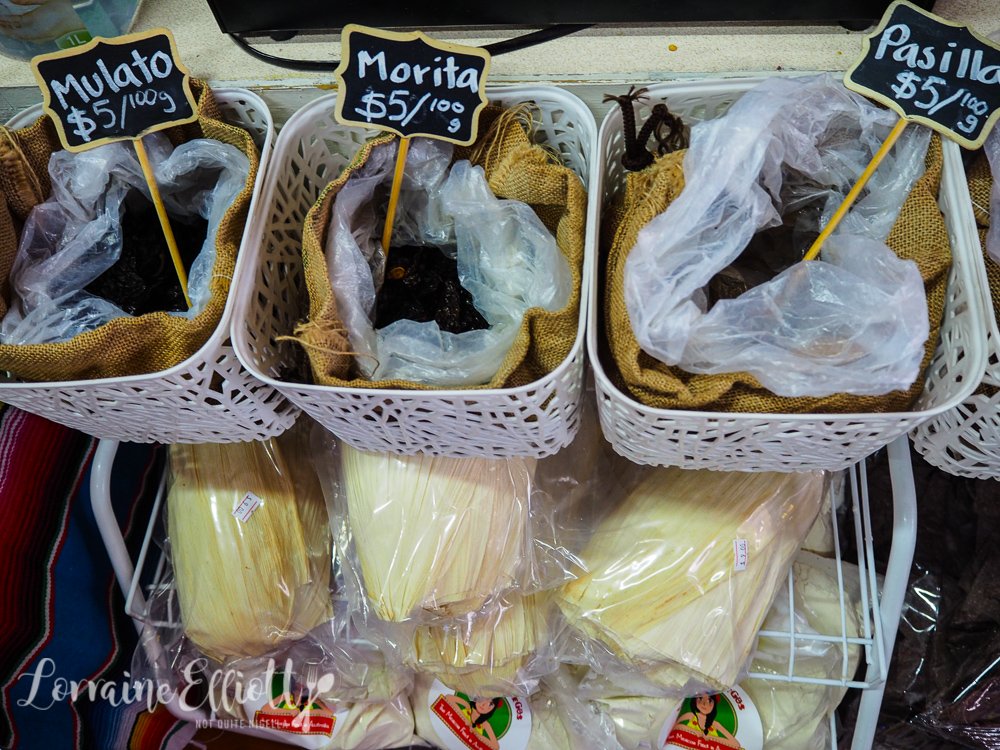 There is a chalkboard menu with all of the items. I do a quick addition and figure if we order one of everything it will still be a really inexpensive meal (and it's been a while since I put anything in my $25 and under cheap thrills category). 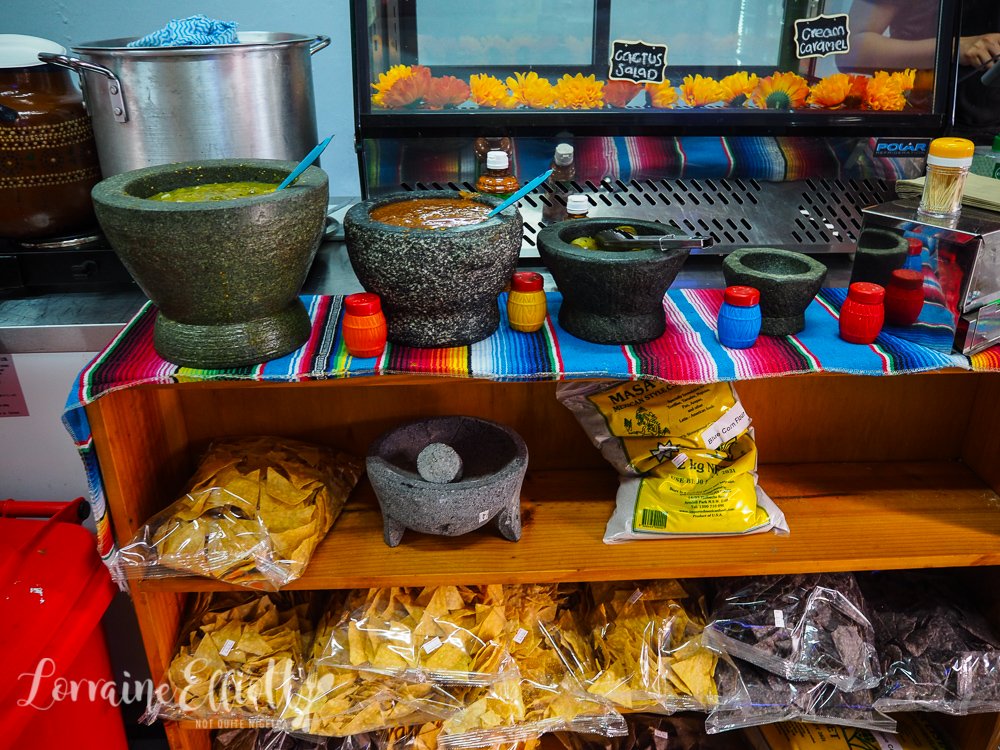 Self serve salsas and jalapenos

We take a seat and they give us some paper cups for our wine and for the horchata and hibiscus drink out of the dispensers at the front. The horchata is very tasty with a hint of cinnamon and a nice level of sweetness and it isn't too watery. The hibiscus drink is very sweet but refreshing. 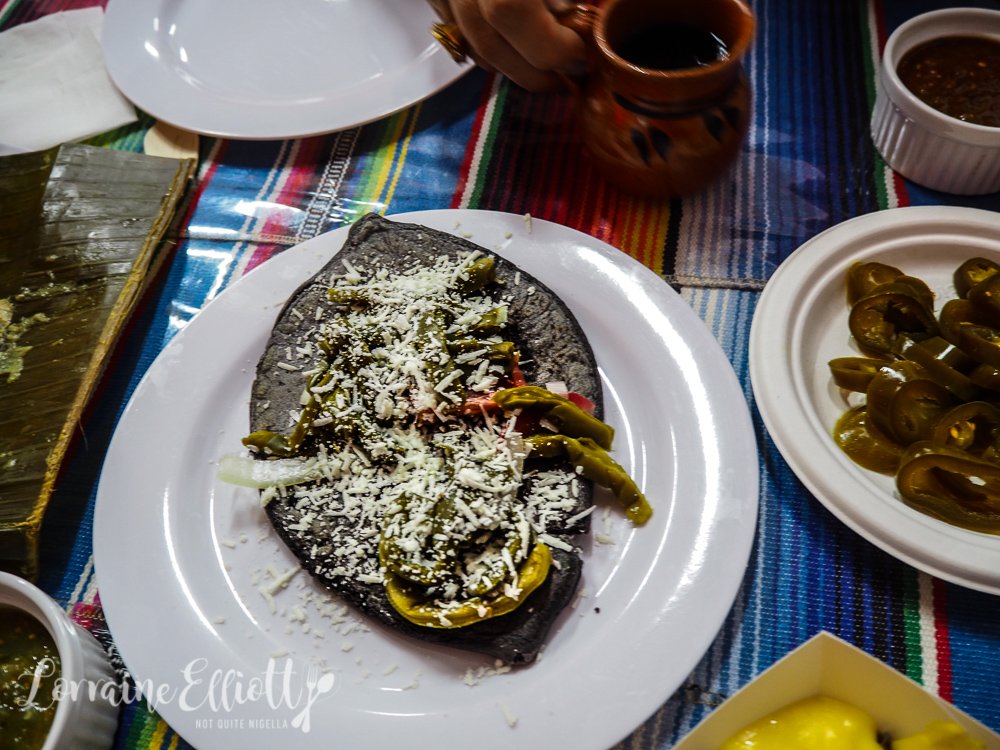 The food comes out a few plates at a time and we share everything. One of the most interesting items is the Tlacoyos, an item from Mexico City where Rosa is from. It's a wide oval shaped flatbread made of organic blue corn masa flour (and you can buy the flour here) topped with nopales (cactus salad) and grated cheese. Nopales or cactus has a refreshing lemony flavour to it (I've cooked with it a few times) and the cheese gives it a good balance adding richness. 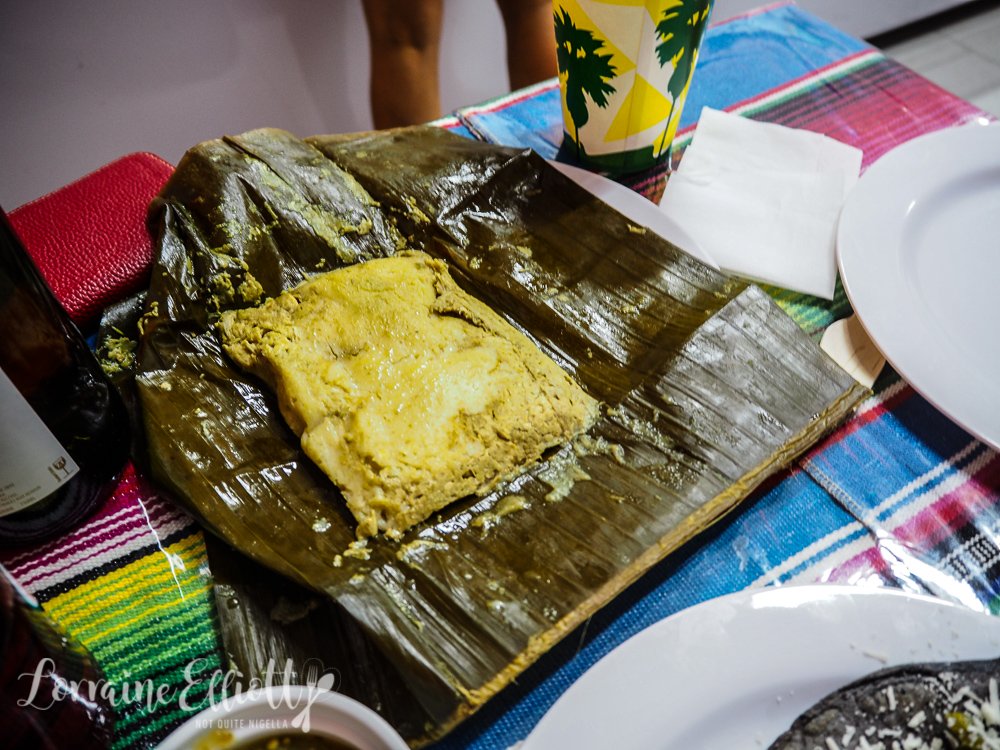 There are two types of tamales served here and each looks quite different. The first is a Oaxacan style tamale that is flat and served in dark green banana leaves. Her version is filled with chicken and green mole and is light and flavoursome. Add some of the salsa to it for a little pep (the red salsa is delicious). 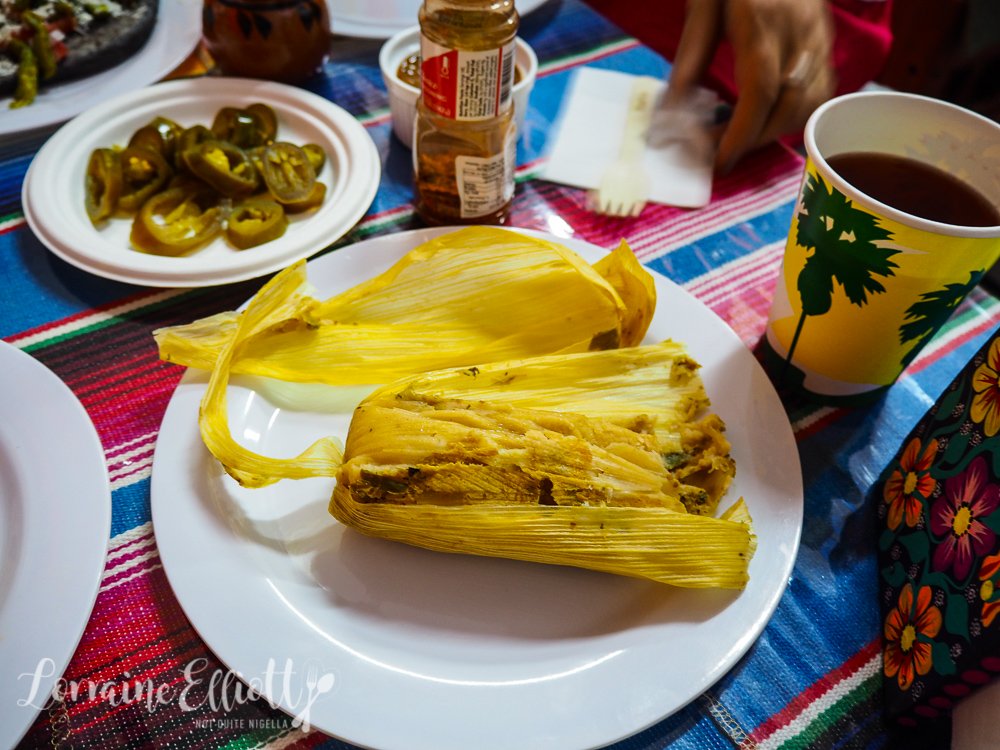 The other tamale is the one you've probably seen more of, the Mexico City style tamale in the corn husks. This one is filled with chicken and green sauce and it's a bit sturdier and a touch denser. 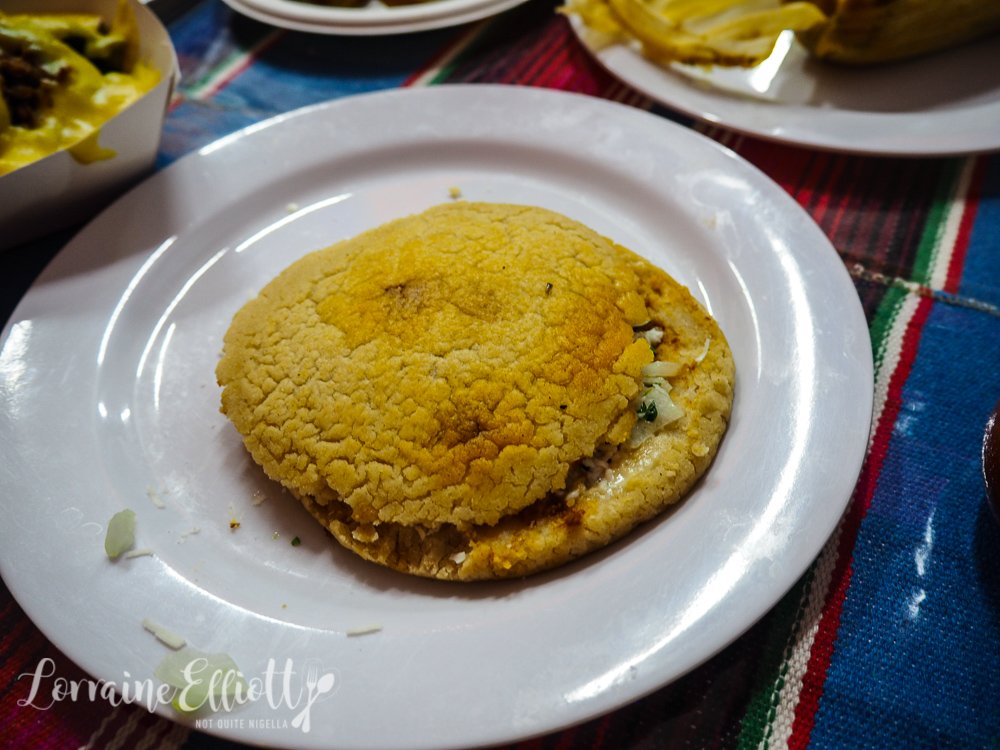 The item I'm most taken with is the gordita, similar to a pocket sandwich. It is a corn tortilla filled with pork crackling or chicharron with onion, coriander and cheese (there's also a vegetarian version). I love this with the pickled jalapenos - one per bite please. 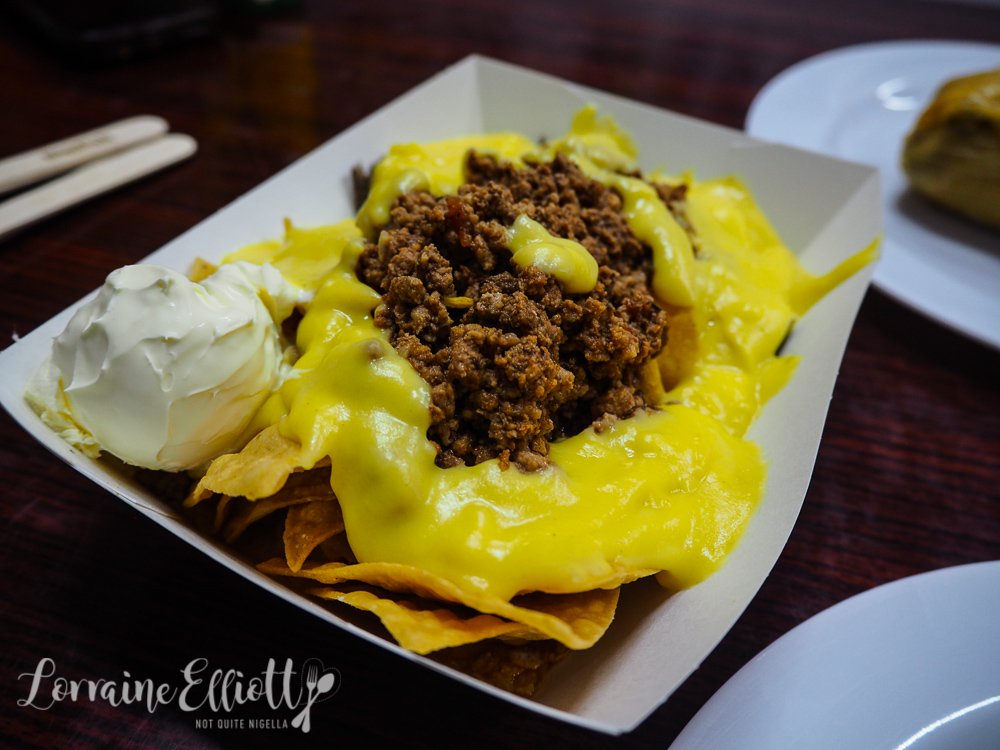 For those that love nachos and tacos there are those too. The nachos come with yellow and blue corn chips and some beef chilli con carne on top and a scoop of sour cream. This is blanketed with a nacho cheese sauce around the edge. I add some jalapenos to this. 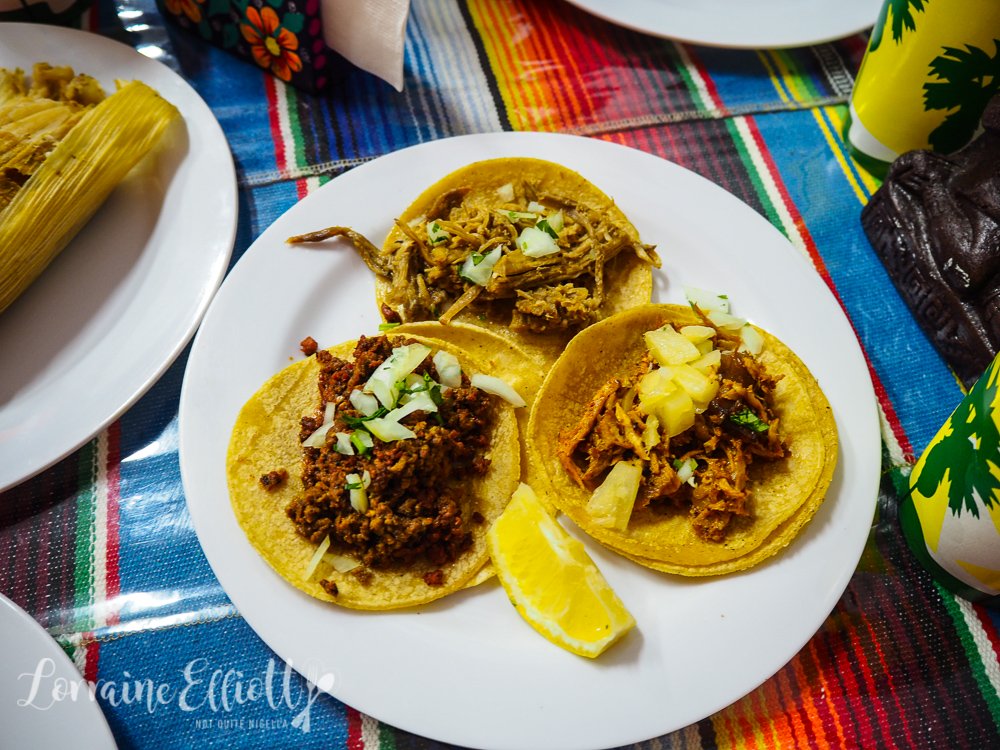 There are three toppings for the tacos that are served on double stacked corn tortillas. There are: Al Pastor or pork marinated in achiote seeds paste and pineapple, a Suadero or slow cooked brisket and a Chorizo with crumbled Mexican style chorizo all served with coriander, onion and limes and they're Mr NQN's favourite item. 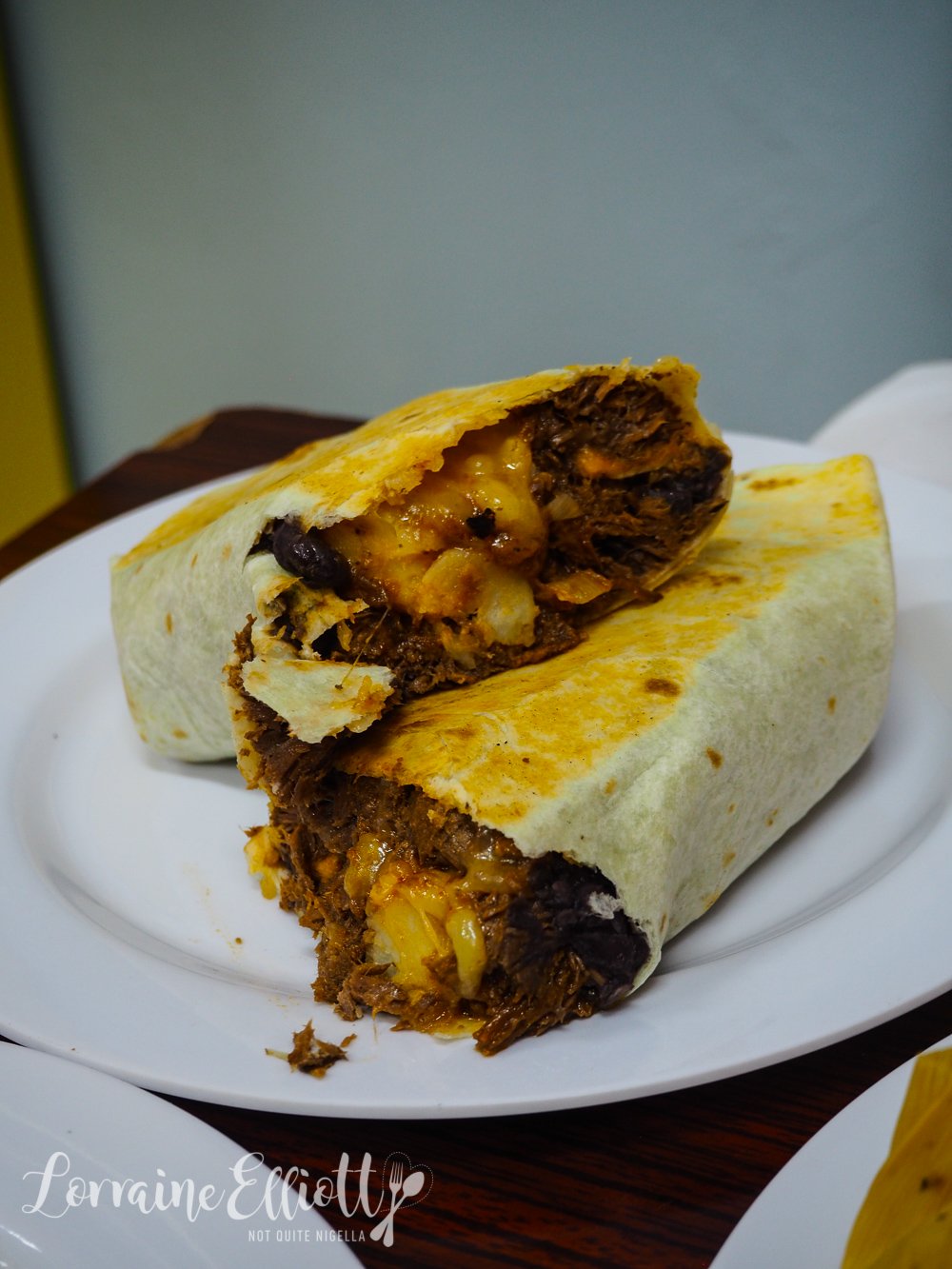 If you want something very filling order the burrito. It's a Chihuahua style flour tortilla packed with refried beans, cheese and beef (or potato and cactus). It's filling and the beef and beans add a lot of flavour to it and a meal in itself. 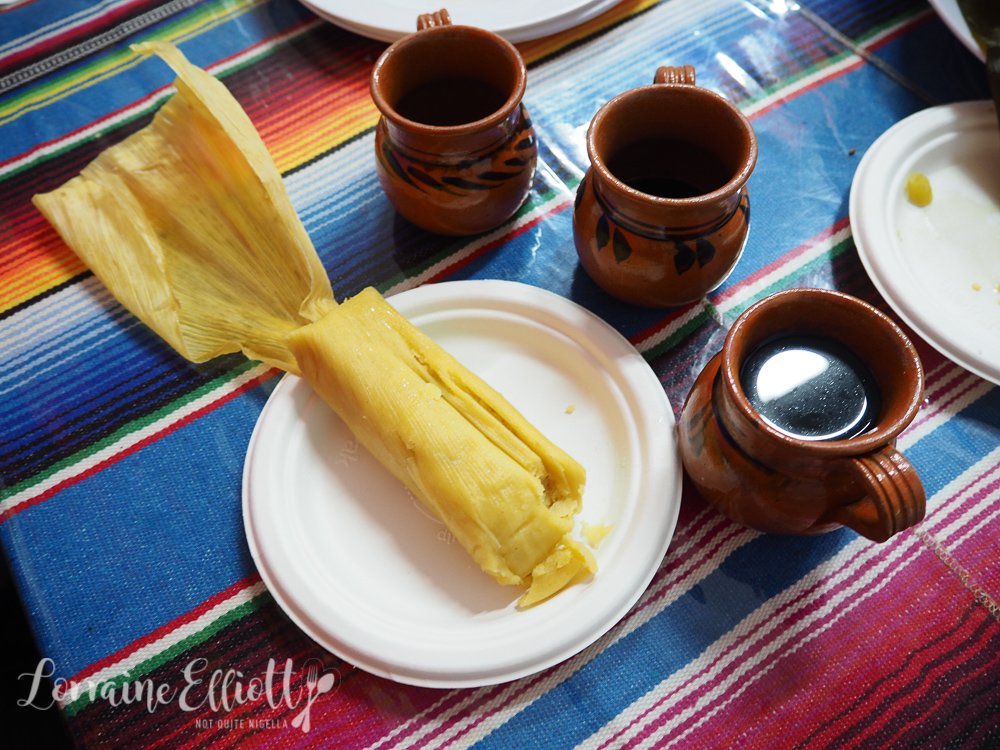 Dessert wise there is one dessert on offer and it's a sweet tamale. Filled with pineapple it tastes like a pineapple upside down cake. "Would you like to try Mexican coffee?" the girl behind the counter says offering us cups of complimentary Mexican coffee served in cute little earthenware cups. The black coffee is sweet and aromatic in cinnamon and spices and the perfect way to end a meal.

So tell me Dear Reader, do you like tamales? Have you tried both kinds? And do you have a favourite taco filling? 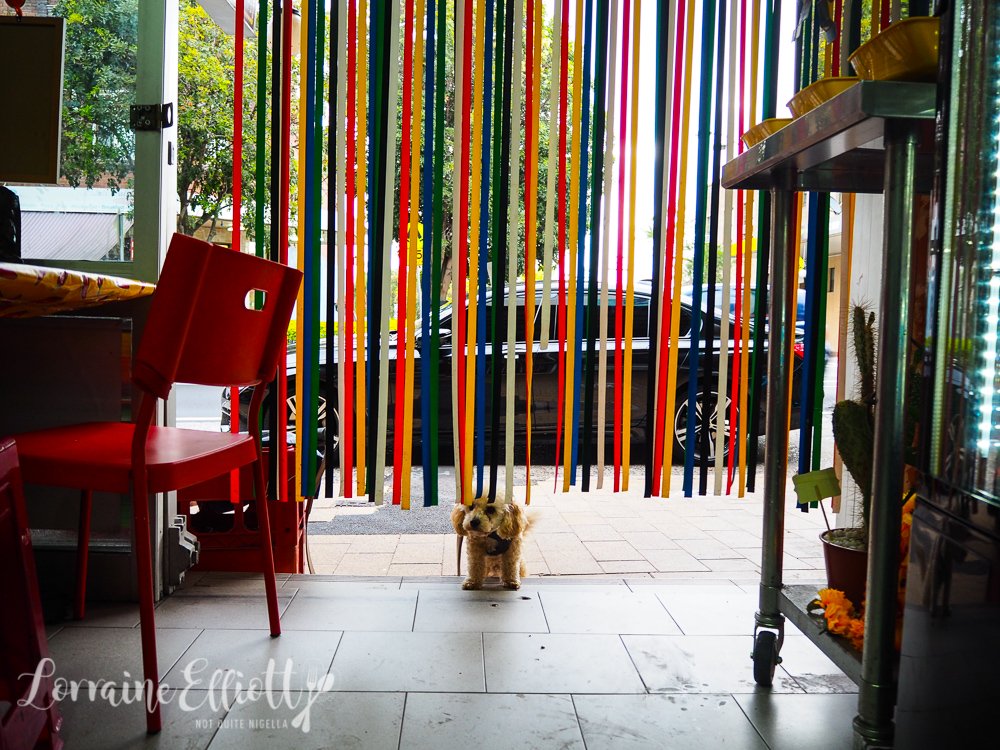 Can I come in?