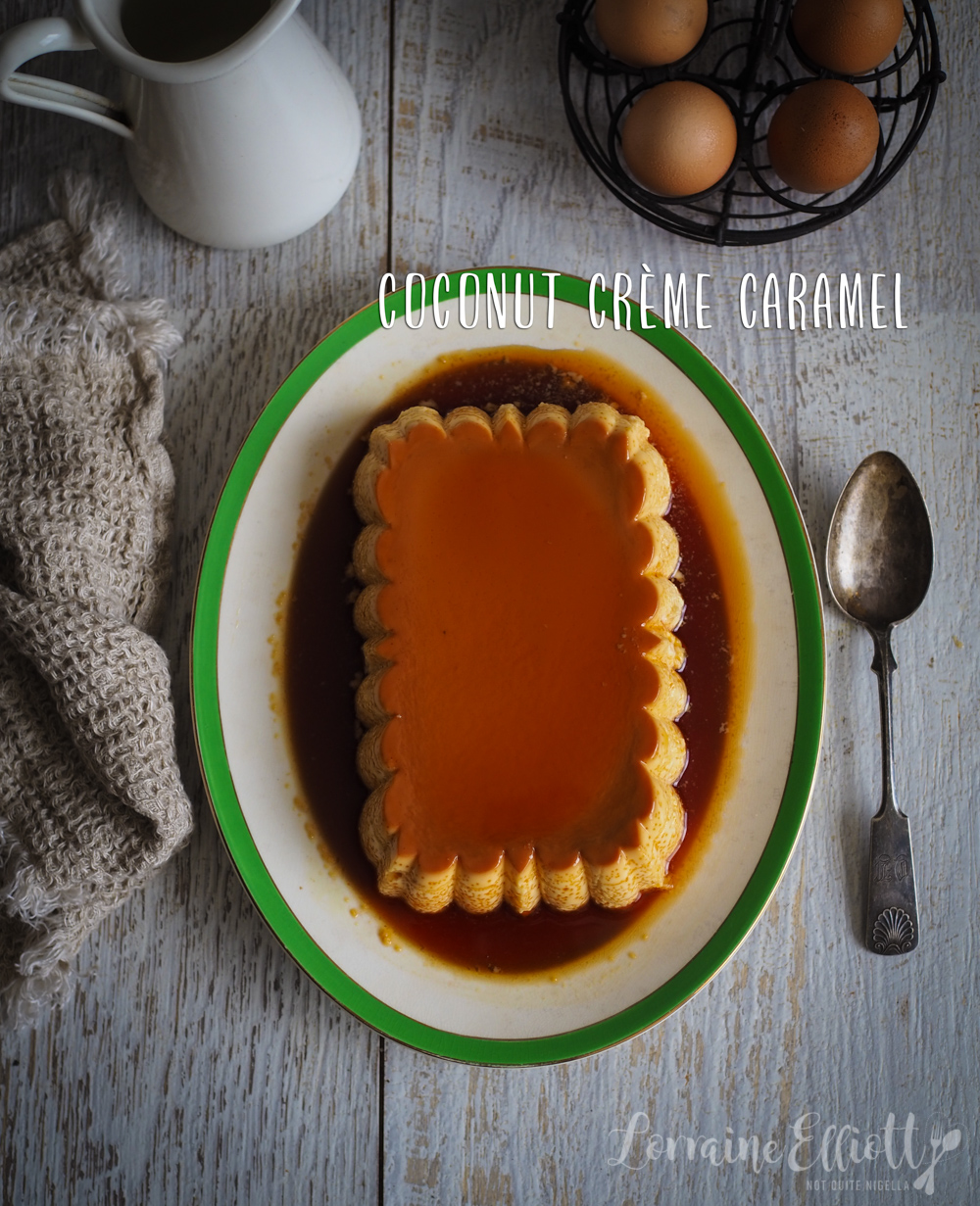 Dear Reader, I've got absolutely amazing Crème Caramel recipe for you today! This is a COCONUT version of crème caramel or flan is one of the most delicious desserts I've ever eaten! Coconut cream and desiccated coconut add an amazing flavour and texture to the classic crème caramel. This is a pushy recipe Dear Reader!

Crème Caramel is one of those gorgeous, slightly retro but very crowd pleasing desserts made with a caramel that is poured into a mold before baking. When upturned the caramel syrup ends up being on top of the rich, wobbly set custard. In Spanish speaking and Latin American countries it is known as Flan and in the Phillippines it is known as Leche Flan. 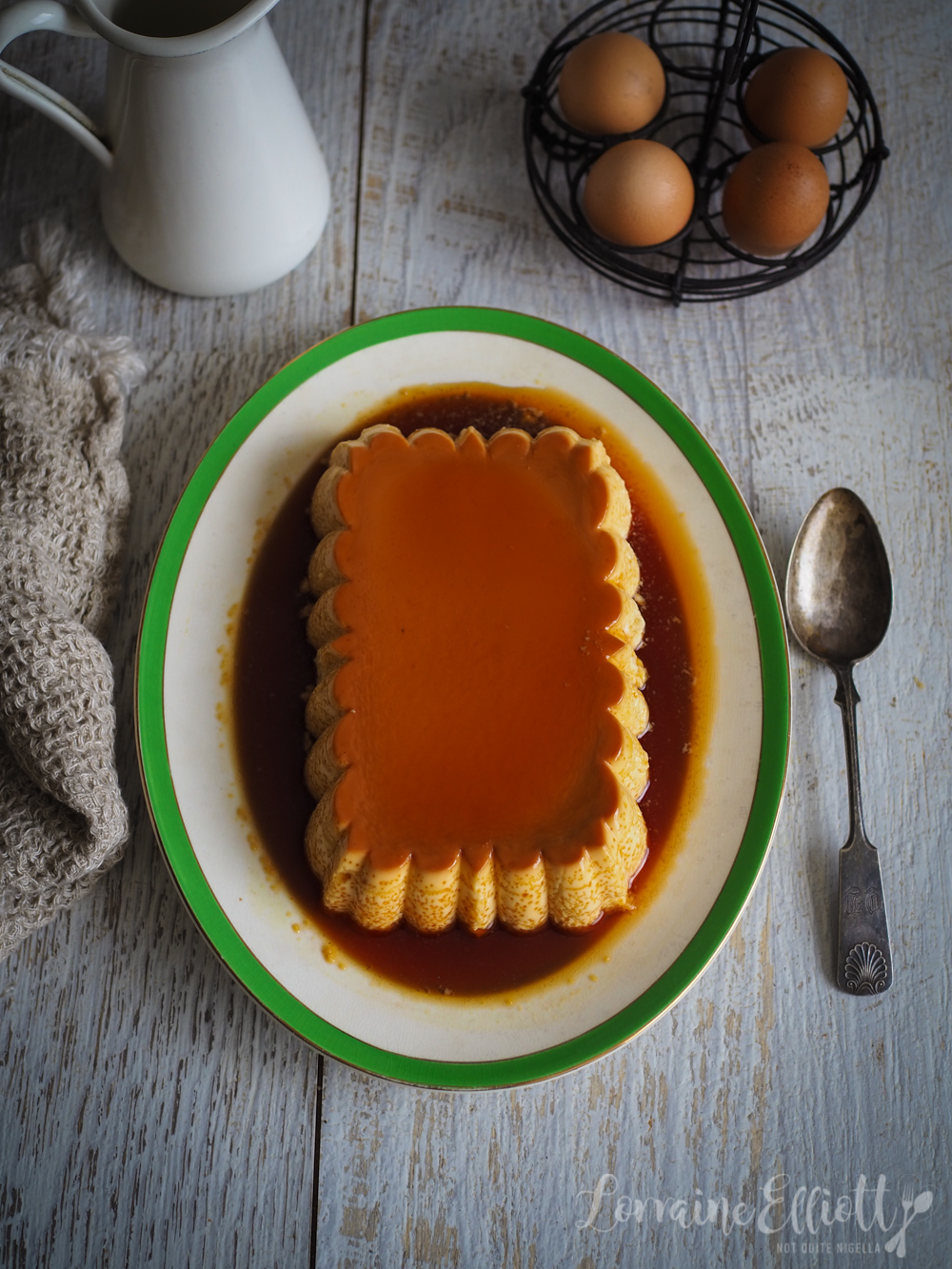 I know that popping out a crème caramel may require a feat of mental strength that we may not have at the moment with everything going on. But hear me out on this. If you're not up to the toe scrunching feeling of whether your crème caramel will ease out of the tin or not then you can bake it and eat it out of a ramekin. I understand totally.

This recipe comes from Chef Cristina Nascimento of Keentown Brazilian Catering. I bought a food delivery from them during lockdown last year and it was so delicious. When I tried their coconut crème caramel I swear I could hear angels sing. And while I like regular creme caramel well enough I'm not crazy over it. However I am obsessed with this coconut version of creme caramel. Cris messaged me when she released her recipe as she knew how much I loved it.

"Flan or 'Pudim' as we call it is probably one of the most classic desserts in Brazilian Culture. We grew up eating it after the family long lunches during the weekend," said Cris, "The condensed milk version became popular after a recipe with it used to come printed on the can. The coconut version is not as popular as the other versions and this one I learned with a Brazilian pastry chef a few years ago and since then it became one of the signature dishes of our business." 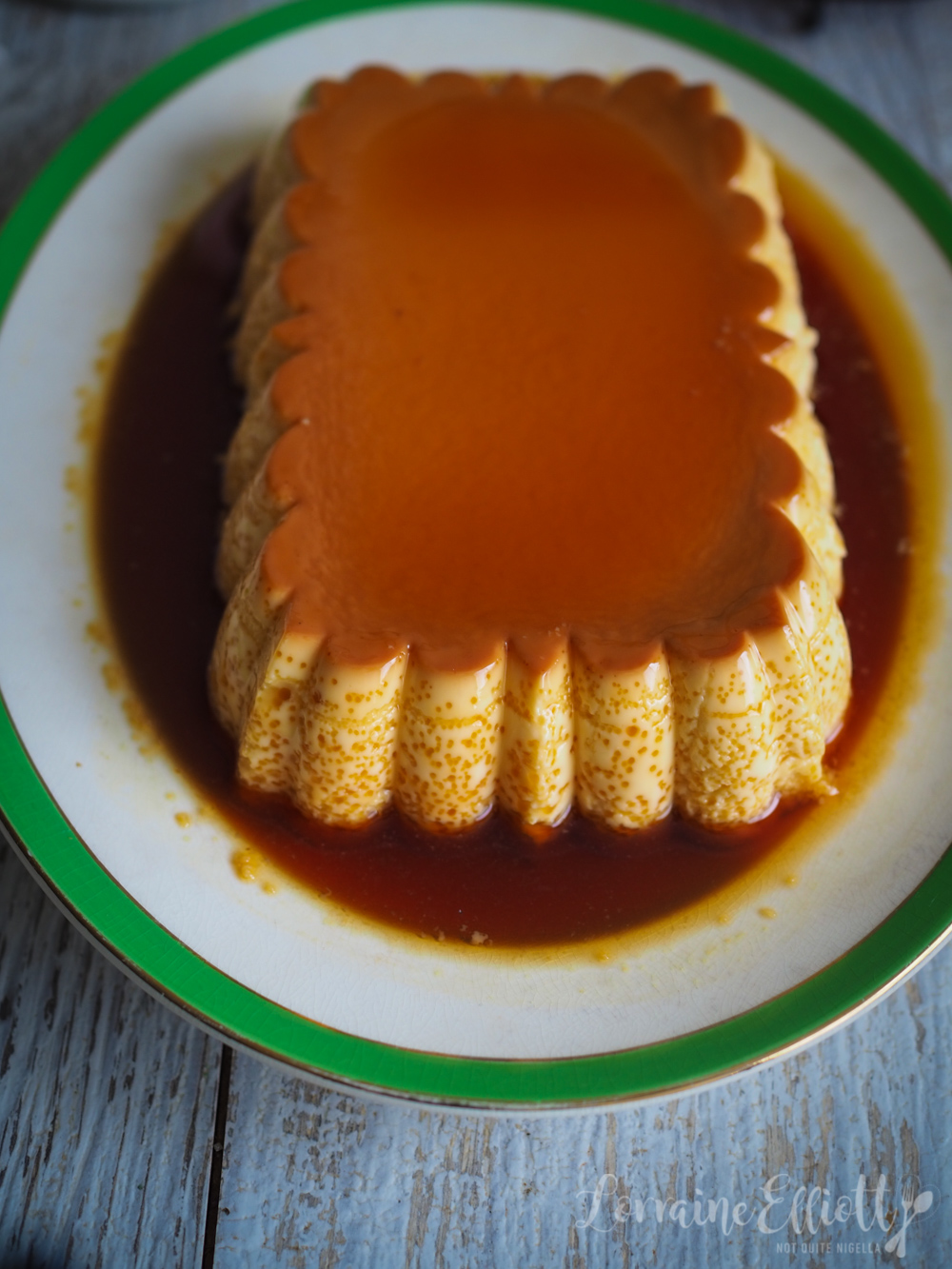 1 - Which tin to use? I used a 6 cup/1.4 litre bundt tin which fit this mixture just about perfectly. Ring bundt tins with holes in the centre make it faster to cook the custard as the area is smaller to reach the centre. Mine was a rectangle so it wasn't as fast to cook the centre. You can also cook these in small ramekins which will cook much faster (check at 30 minutes for individual ramekins).

2 - Make sure to wait til the caramel is cool before adding the custard-this is a tip from Cris.

3 - Don't worry about the bubbles and straining the mixture for a creme caramel. The bubbles will sit on the bottom of the crème caramel when you upturn it. 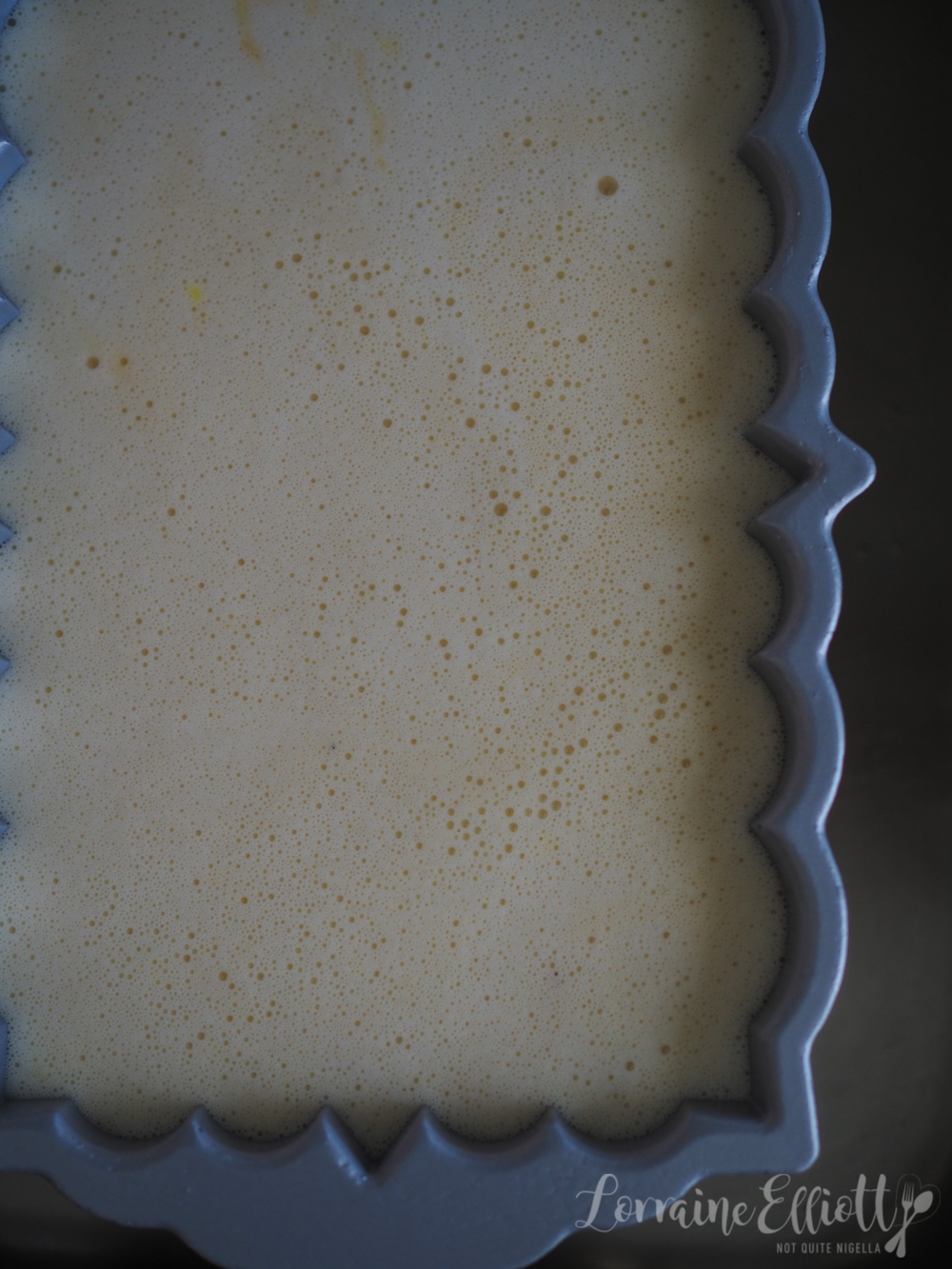 4 - Cook your creme caramel in a water bath so that it gently cooks the custard and evenly distributes the heat.

5 - To know when your creme caramel cooked can be a slightly tricky thing. Obviously if the liquid in the centre is still sloshing around it isn't ready. Remove the foil covering the creme caramel and then keep cooking it and the top turns golden. If you slip a small knife in and it comes our clean you get a bit of set custard on it you can take it out. If you get liquid mix on the knife then keep cooking it.

6 - The creme caramel will continue to cook after you have taken it out of the oven.

7 - Gradually cool your creme caramel in the tray of water and then the benchtop and fridge either for 3 hours or overnight. 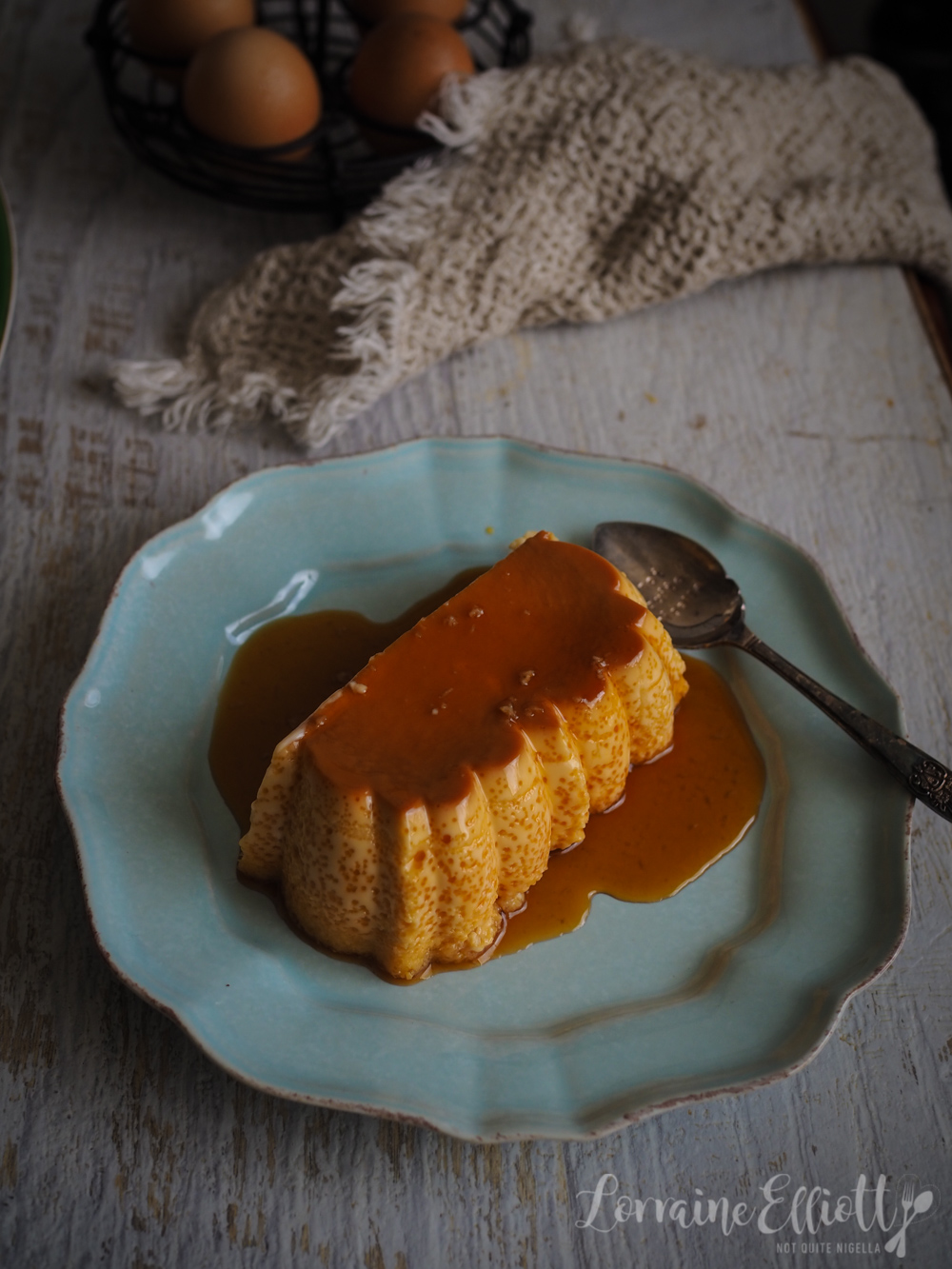 Although I really wanted to make this for Christmas I thought I'd save this for the new year to start it off with a bang. And well 2022 started off with a bang of sorts. And by bang I mean the sound of Mr NQN hitting the water. It was around noon on New Year's Day that he started getting ready to go windsurfing. It was the third day in a row which is unusual because he usually likes to rest in between sessions but he said, "I'll just go out for a bit. I don't want to get injured."

Those were foreboding words as he sent me a message a few hours later. It turned out that he had fallen off his board in a weird way so that he tore his MCL. Normally he would go get medical treatment but with everyone warning against going near hospitals he limped home.

"I'm fine," he said wincing but by the next morning he could barely walk to the bathroom so I went in search of crutches and a range of braces for his knee and before long he was hobbling and crutching everywhere. "Great start to the year," he said sarcastically as he watched all of his fun plans disappear in front of his eyes. He was halfway through his month-long vacation and he had planned to go windsurfing the whole time and we had our holiday booked on the Central Coast.

But it turned out that he wasn't alone with a wobbly start to the year. Several close friends and acquaintances had tested positive for COVID. Most of them didn't know who they got it from or when and testing being the absolute mess that it is meant that they had to rely on rapid tests which only tend to show when people are high viral load. As for Mr NQN all I could do to cheer him up was offer him something else wobbly, of the more delicious variety and that was this coconut crème caramel.

So tell me Dear Reader, how has your year started off? Are you a creme caramel fan? Have you ever tried coconut creme caramel? 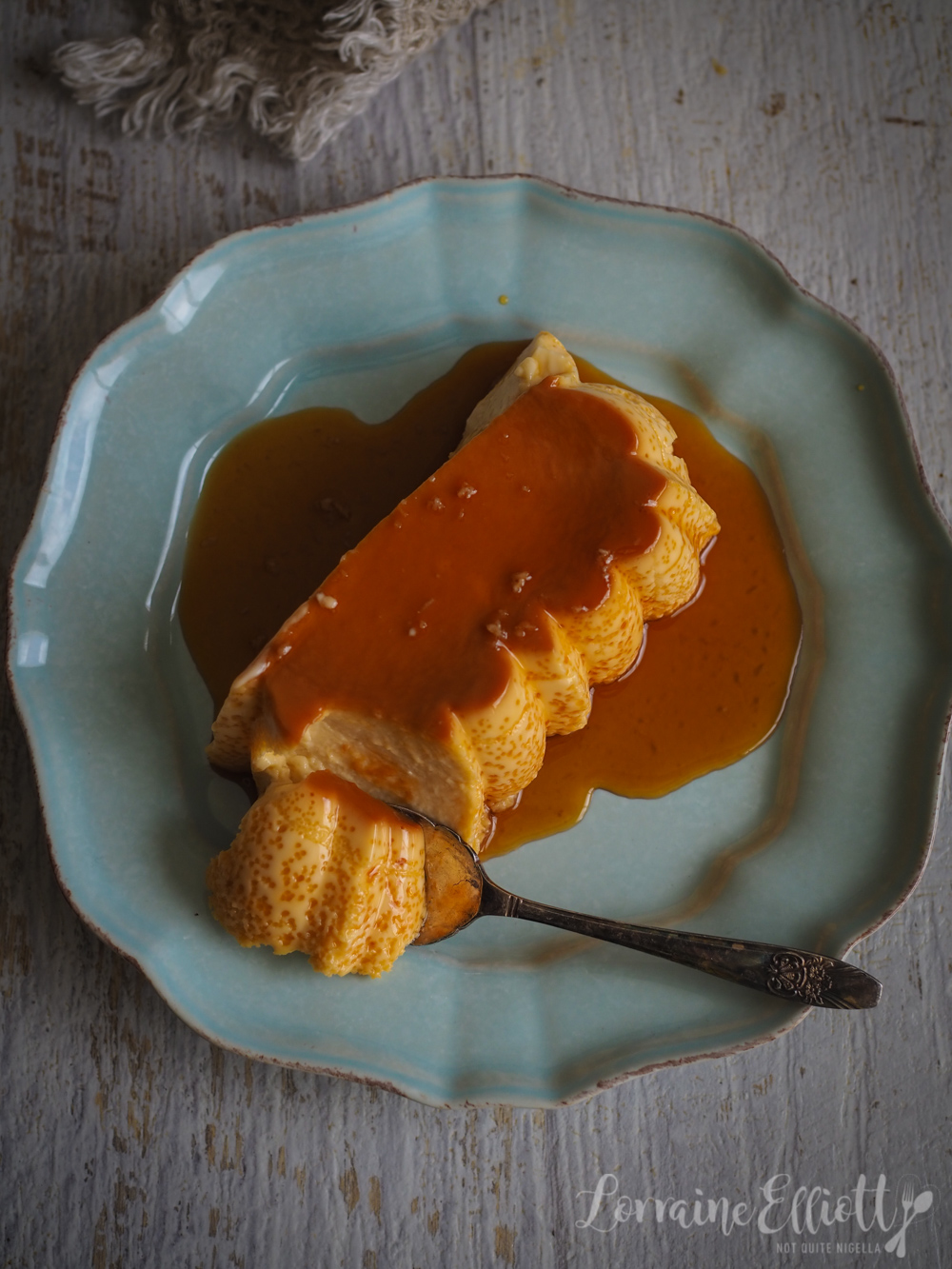 An Original Recipe by Lorraine Elliott, adpated from a recipe by Cris Nascimento

You will need a bundt cake tin (I used a 6 cup/1.4litre bundt tin), a tray filled with 1/3 of water and foil to cover 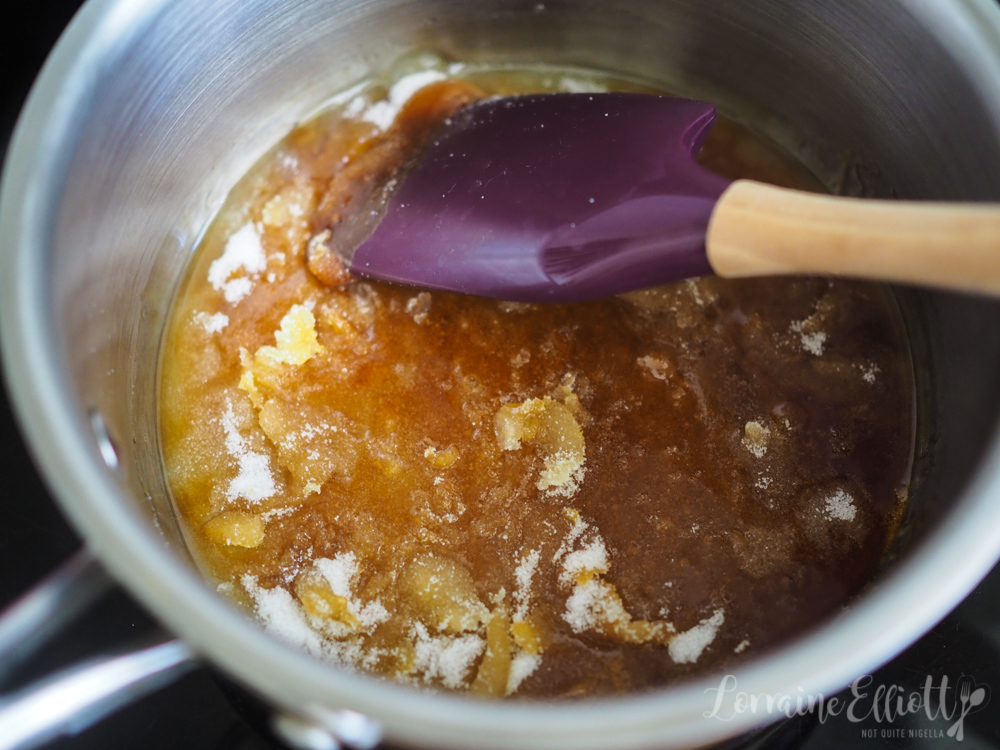 Cooking the sugar by itself 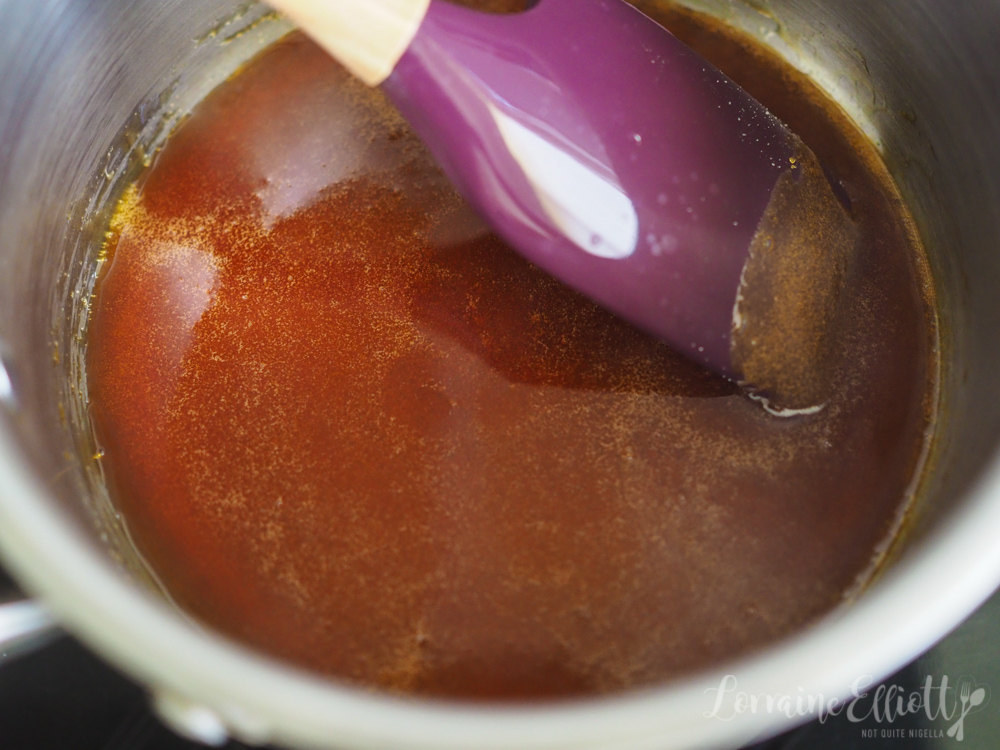 Forming a caramel syrup with water

Step 1 - In a heavy based small saucepan place the sugar and cook on medium high heat gently stirring until the sugar is dissolved and a light caramel is formed. Add the water slowly and stir it until it becomes a syrup. Pour it into the bundt tin and place it in the tray filled with water. 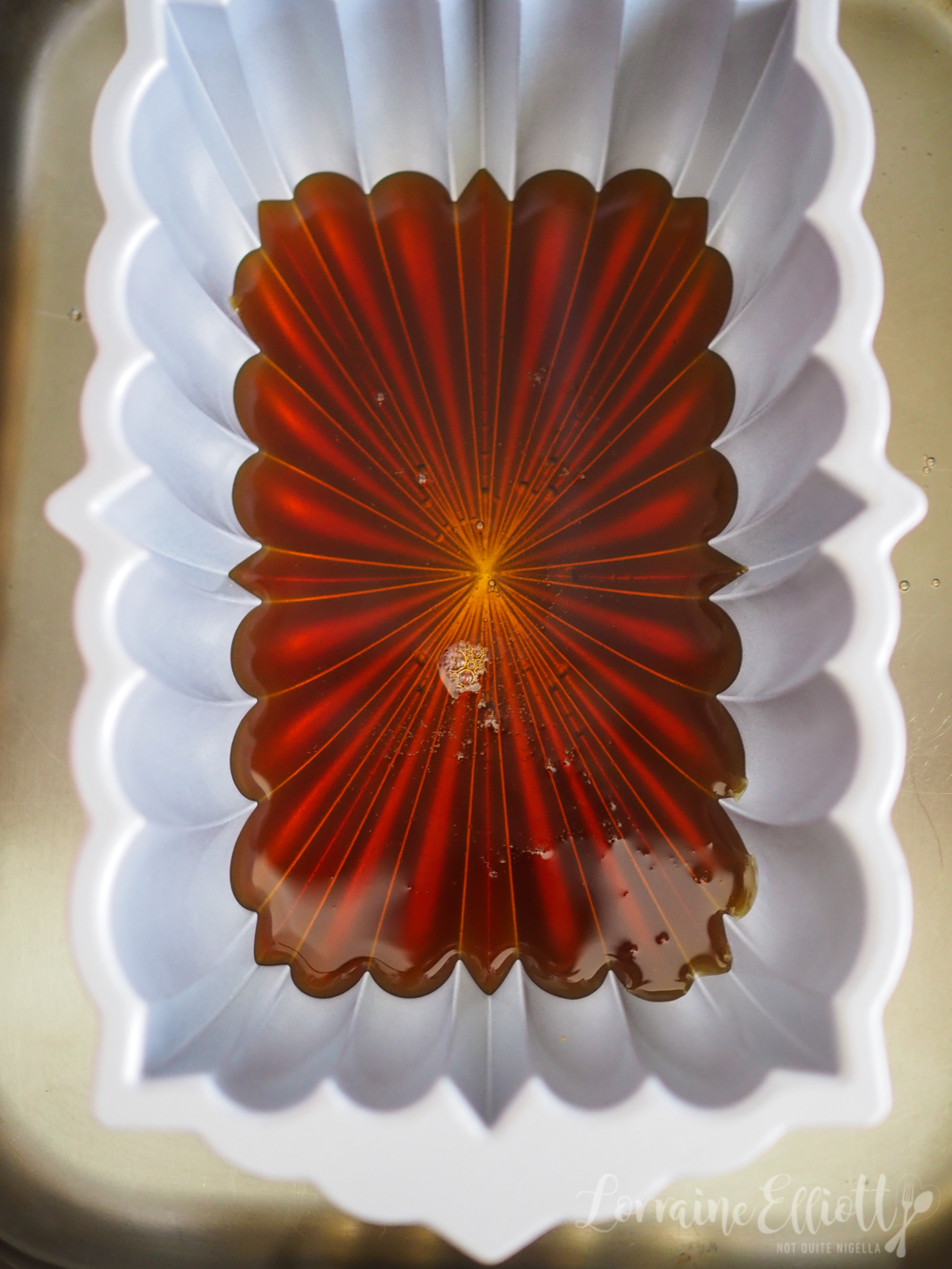 Step 2 - Preheat the oven to 180°C. In a blender, add all the ingredients and blend it for 1 minute or until all the ingredients are well mixed. You can also do this in a thermomix for 10 seconds speed #5. Once the caramel is cool to the touch, add the crème caramel to the tin. Cover the whole tray with foil and place it in the oven. 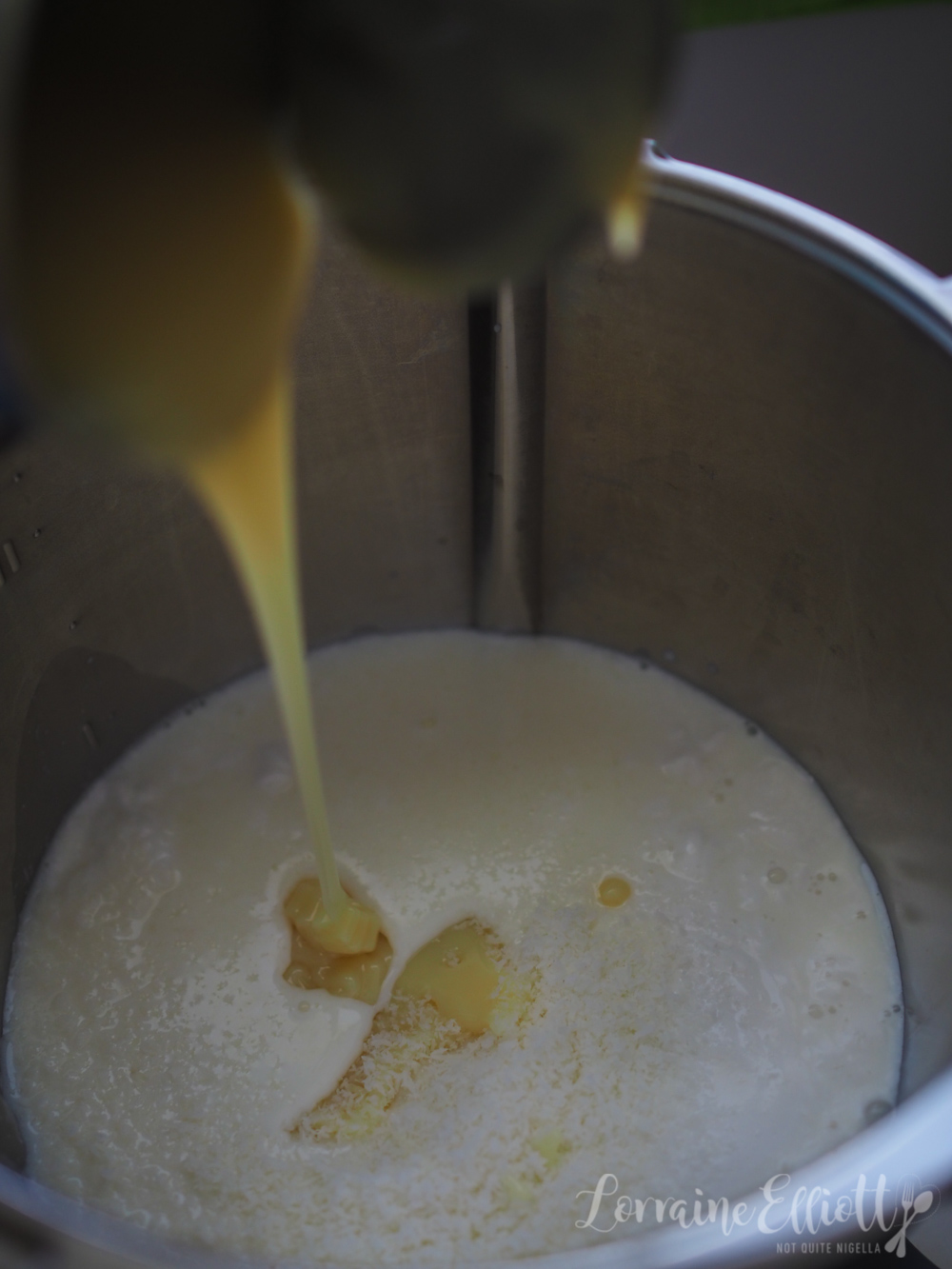 Step 3 - Bake for 40 to 45 minutes covered. Remove the foil and bake for 10 more minutes. Note: mine wasn't a round bundt tin with a hole in the centre that bakes faster so I needed to bake it for a total of 60 minutes (45 minutes covered, 15 minutes uncovered). Once cooked, remove it from the oven and let it cool down. Place in the fride for at least 3 hours or ideally overnight. 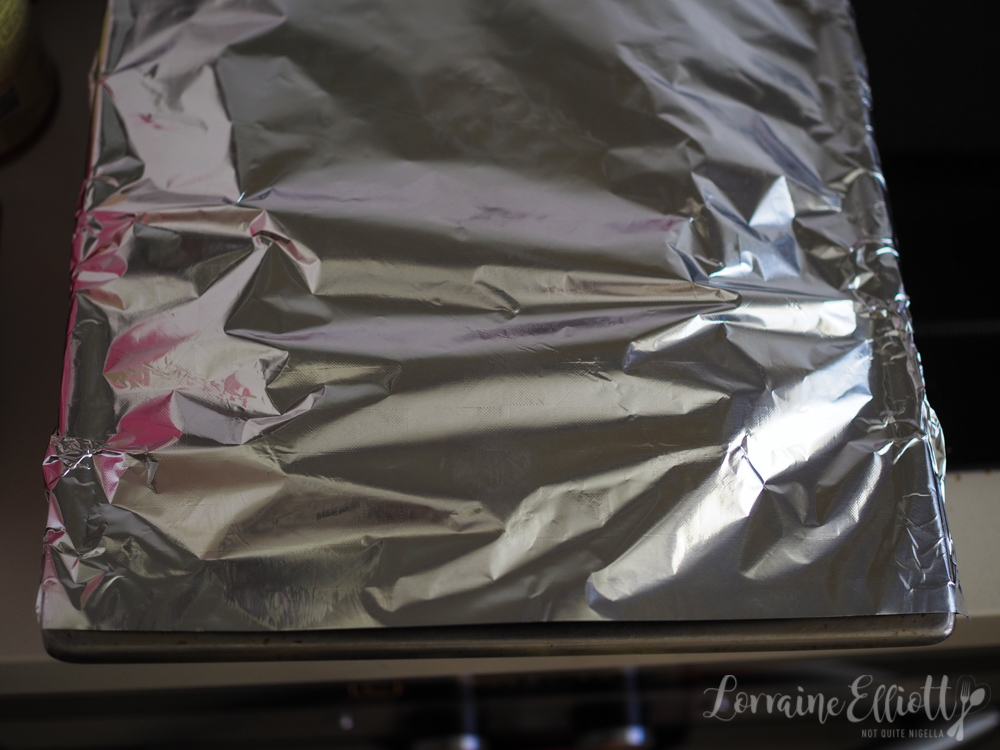 Covering the tray and baking dish with foil

Step 4 - To plate it, place the tin on the gas flame for 30 seconds (to help the caramel melt) or I ran the tin under hot water until the edges started to loosen. Place a serving plate on top and quickly turn upside down and the tin will release the creme caramel. Serve cold. 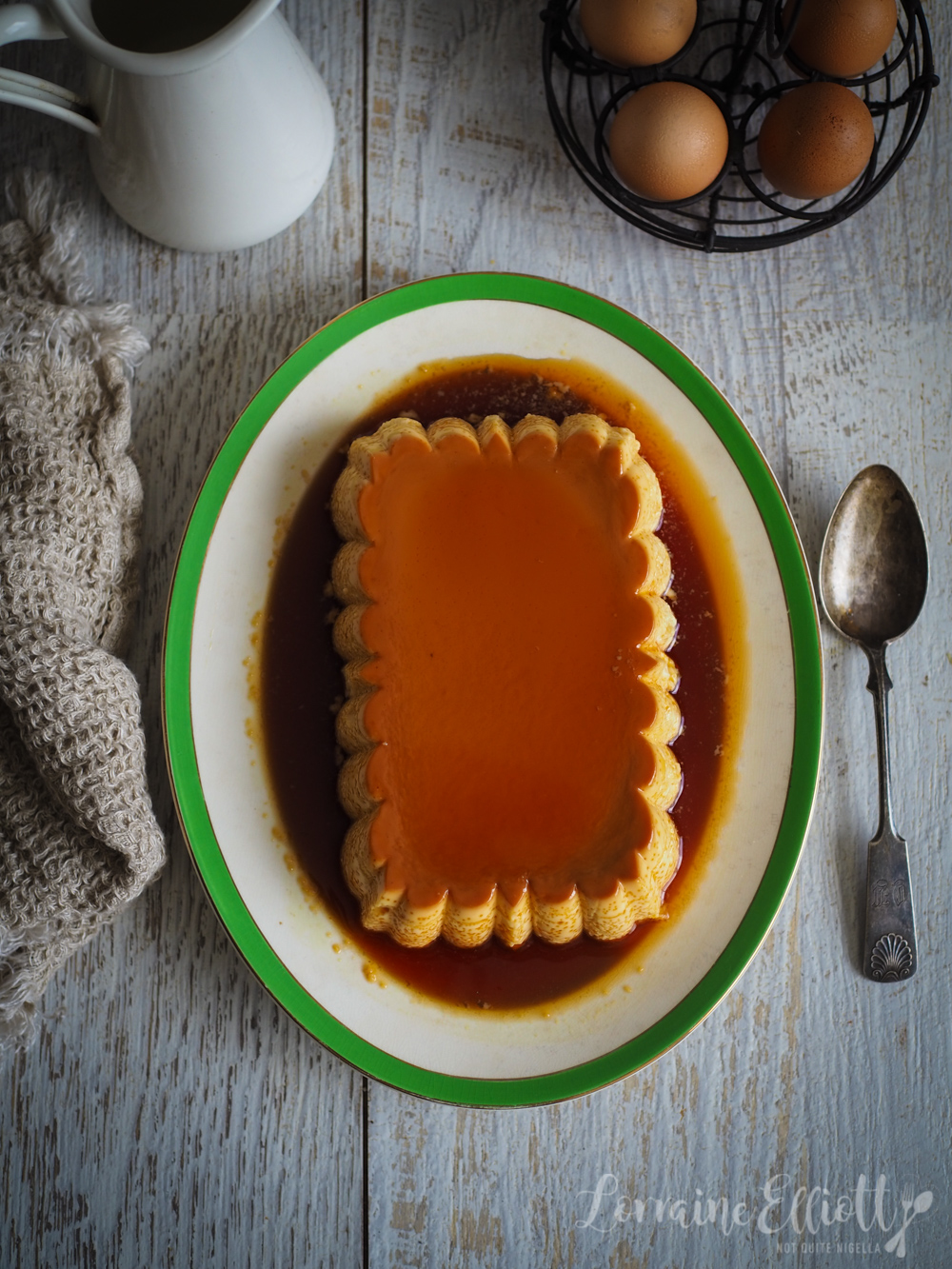