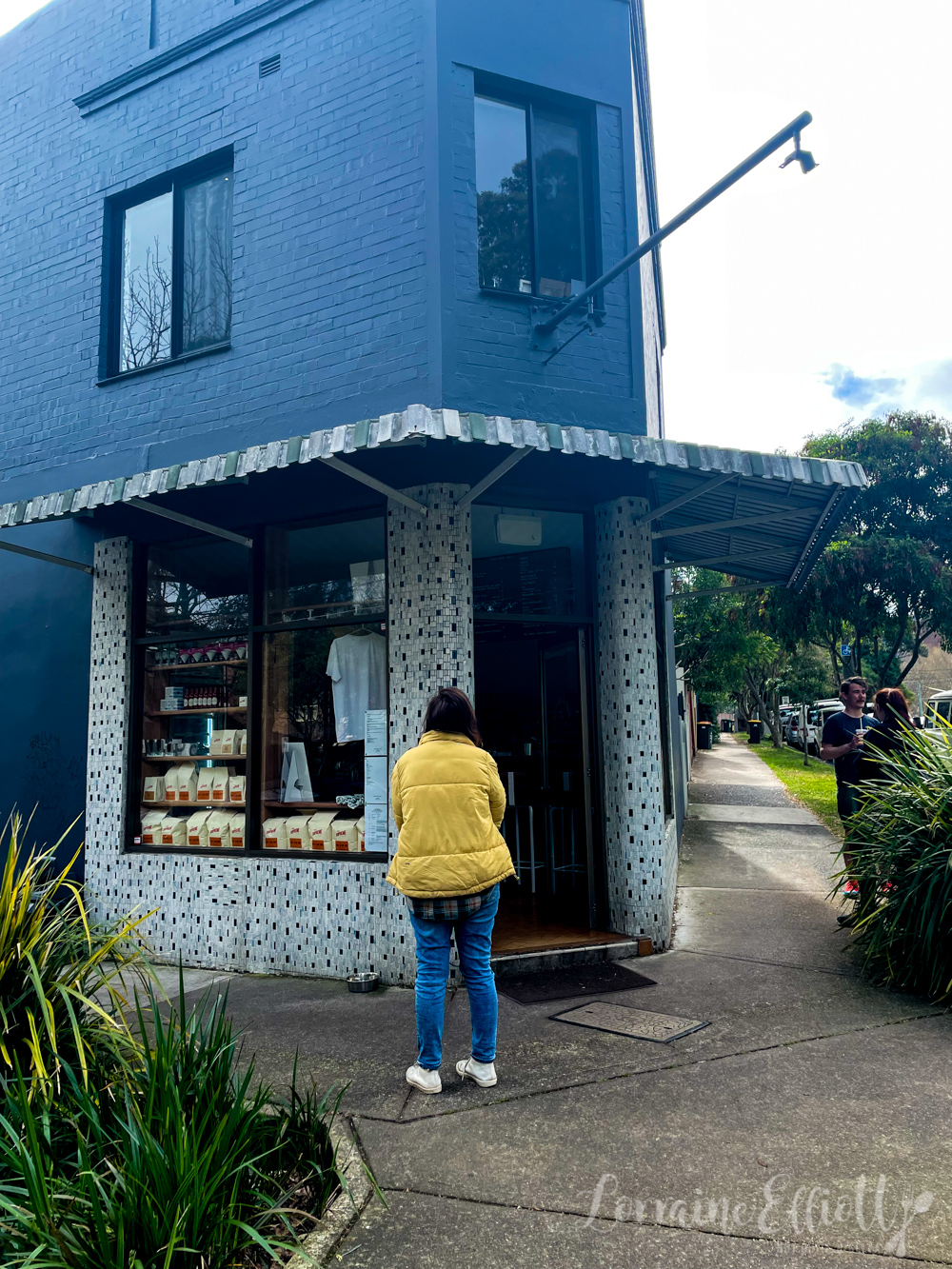 Good Ways Deli is a sandwich shop and general store on Cooper Street in Redfern. They sell a range of sandwiches made fresh to order as well as focaccia, brownies and lamingtons. 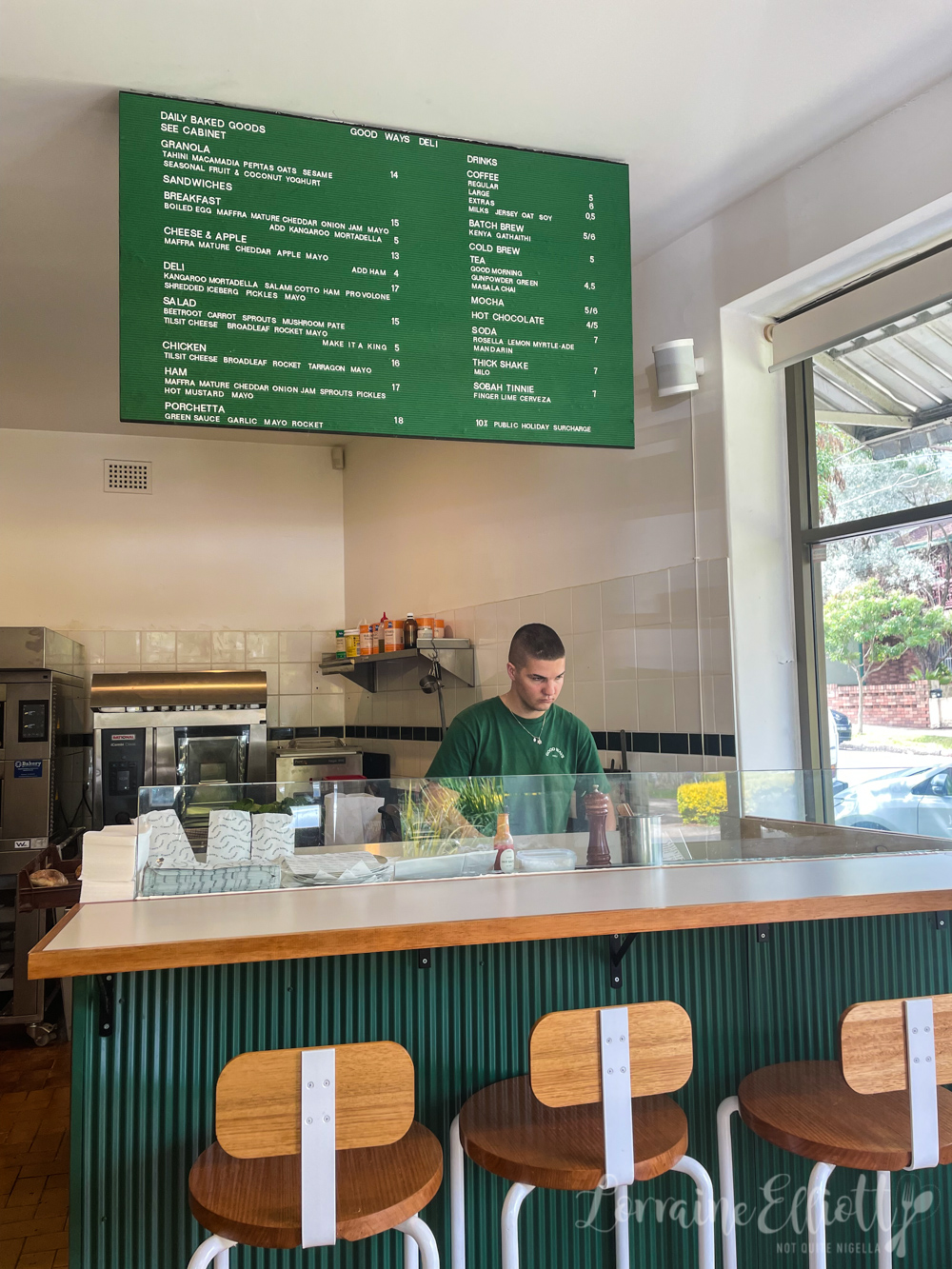 Monica and I had planned a picnic with sandwiches from Good Ways Deli. Unfortunately the forecast said rain and our garden was out of commission due to the renovations so Monica suggested that she pick up some sandwiches and we eat them at her house. Monica and I love sharing food - we often split bags of chips and snacks so why not split a sandwich so we can try more? We texted beforehand and decided on three sandwiches and a brownie to share. Good Ways Deli is by Tom Pye of Coffee Supreme and chef and baker Jordan McKenzie. 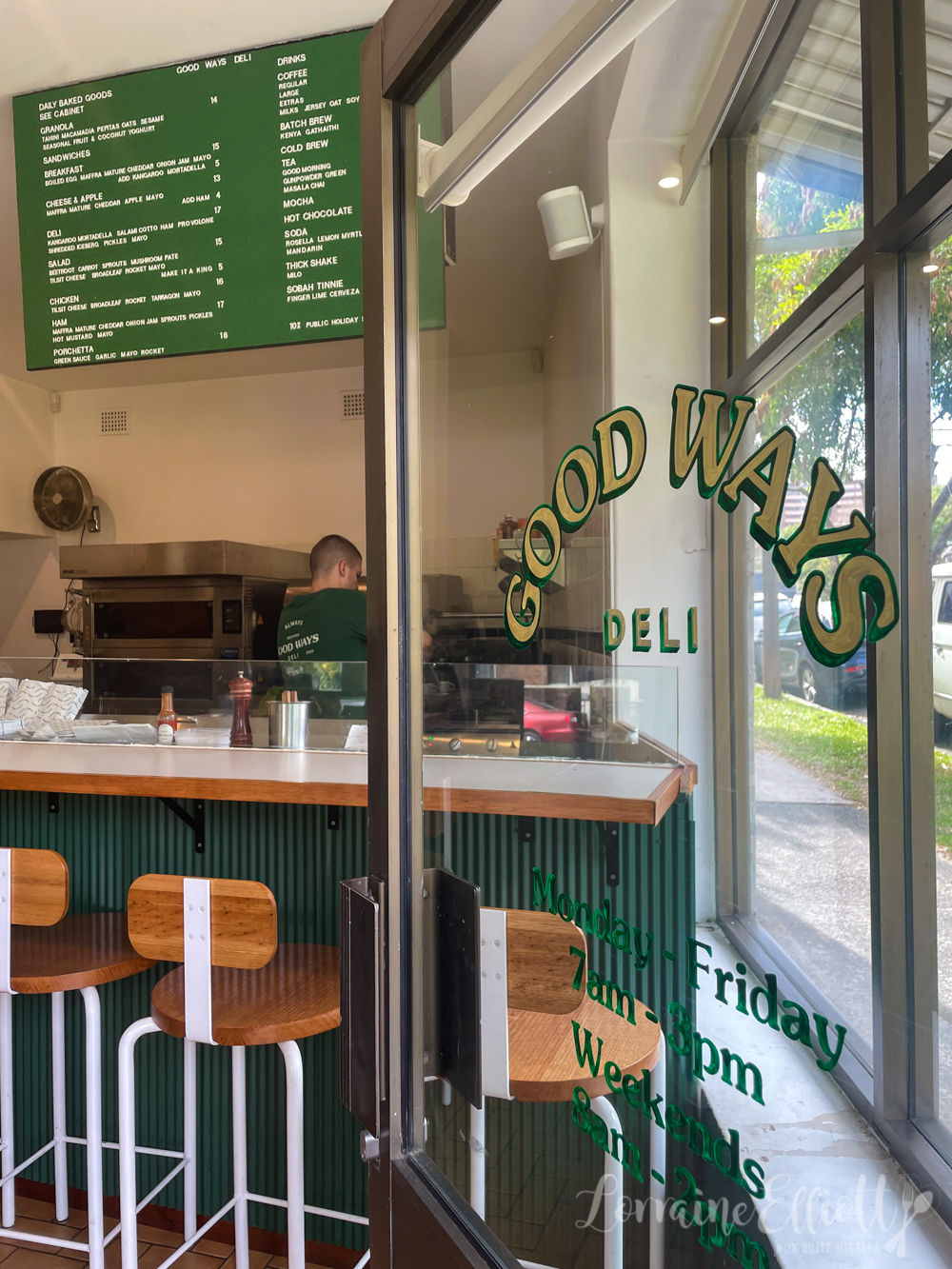 The proposition here is sandwiches with a slight Australian accent to a few items. Be it using kangaroo mortadella in a deli sandwich or wattleseed in the brownie or lamingtons or ANZAC bickies for afters. The sandwich selection is neat with half a dozen choices and one rotating special. 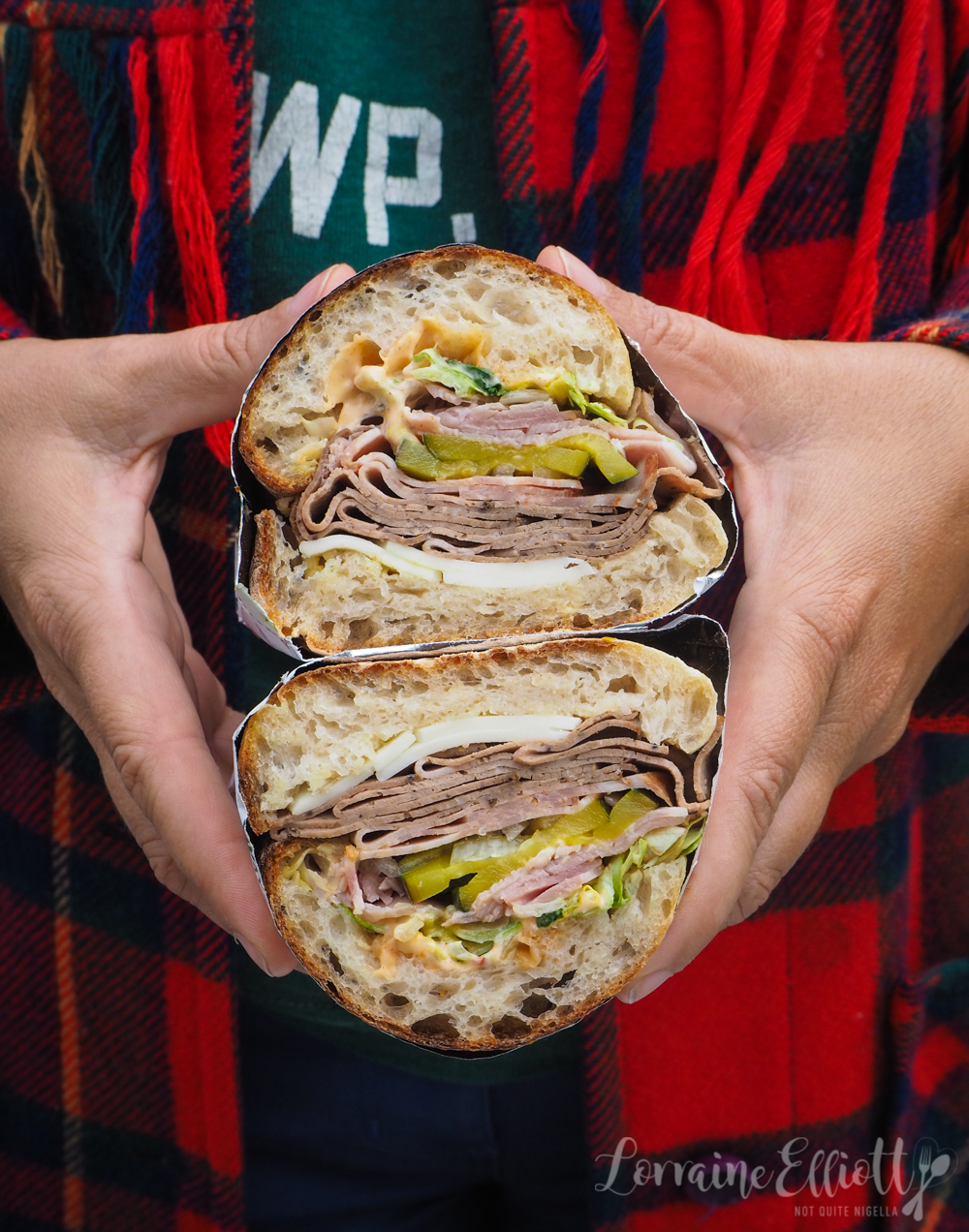 I loved the idea of the deli with kangaroo mortadella, salami cotto, ham, provolone, pickles, white onion, shredded iceberg and a sandwich sauce like a tangy mayonnaise. The kangaroo mortadella is made for them by Marrickville's Whole Beast Butchery and there's a definite smokey vibe to the meats but they really all meld into one so you don't really get a distinct flavour of each. I would have loved a bit more sauce in my sandwich too as they are all on the drier side. 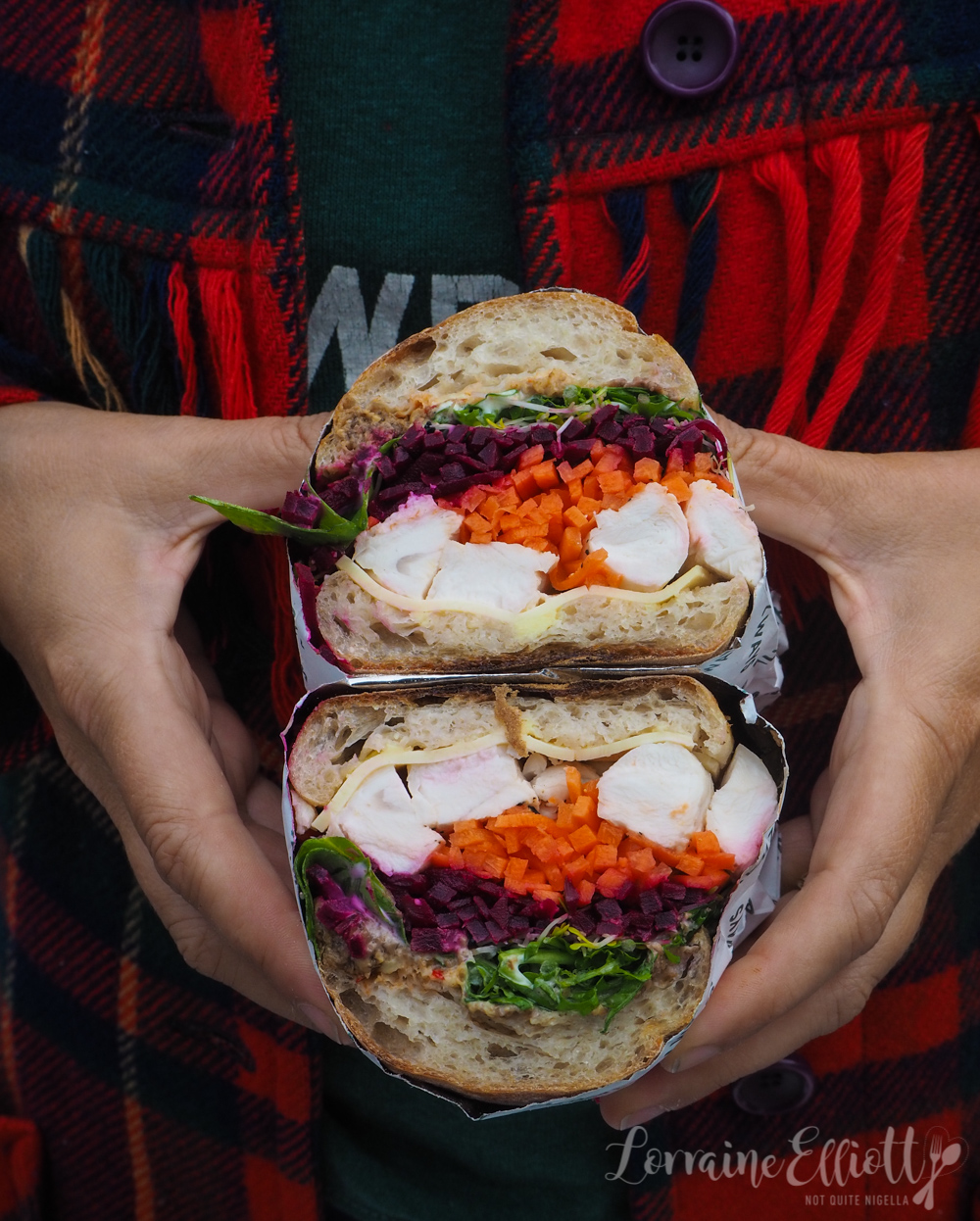 Salad $15 Upgrade to King with Chicken and Chilli $5

Monica loves salad and sprouts in her sandwich so she really wanted the salad sandwich but upgraded it to a "King" sandwich by adding chicken and chilli. There is beetroot, carrot, sprouts, mushroom pate, tilsit cheese, broadleaf rocket and mayonnaise. The poached chicken is tender and the chilli is really mild in this and you only get the slightest tingle on every third bite or so. 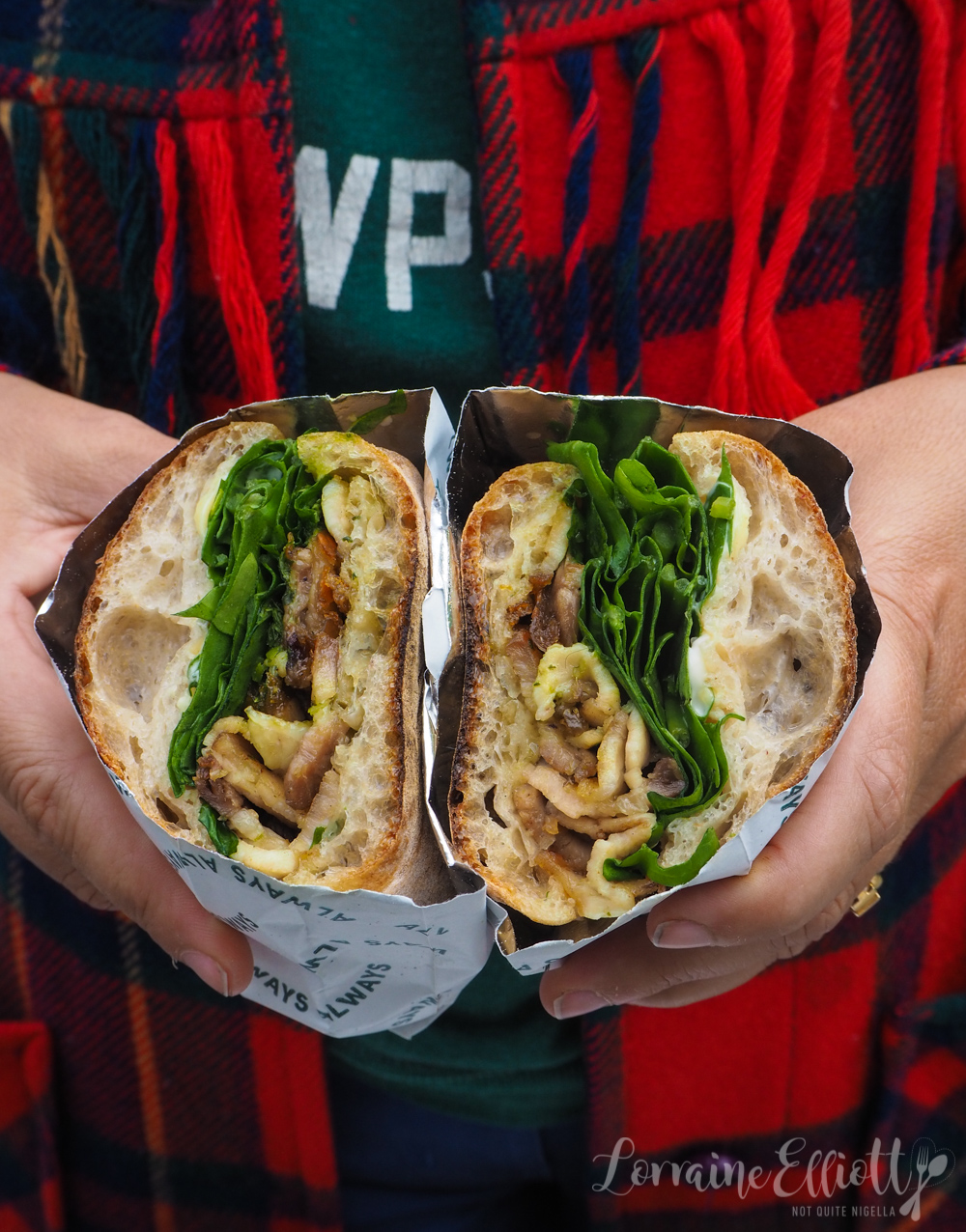 My favourite sandwich is the weekly special so alas is soon to end its run. It's made with Whole Beast Butchery porchetta, a herby green sauce, mayo, garlic, rocket on sourdough ciabatta. It's also good because it is slightly warm and has a bit more moisture than the other sandwiches. The porchetta is just the sliced meat (alas none of the crackling) and there's layers of rocket and warm porchetta and the bread is soft and fresh too. 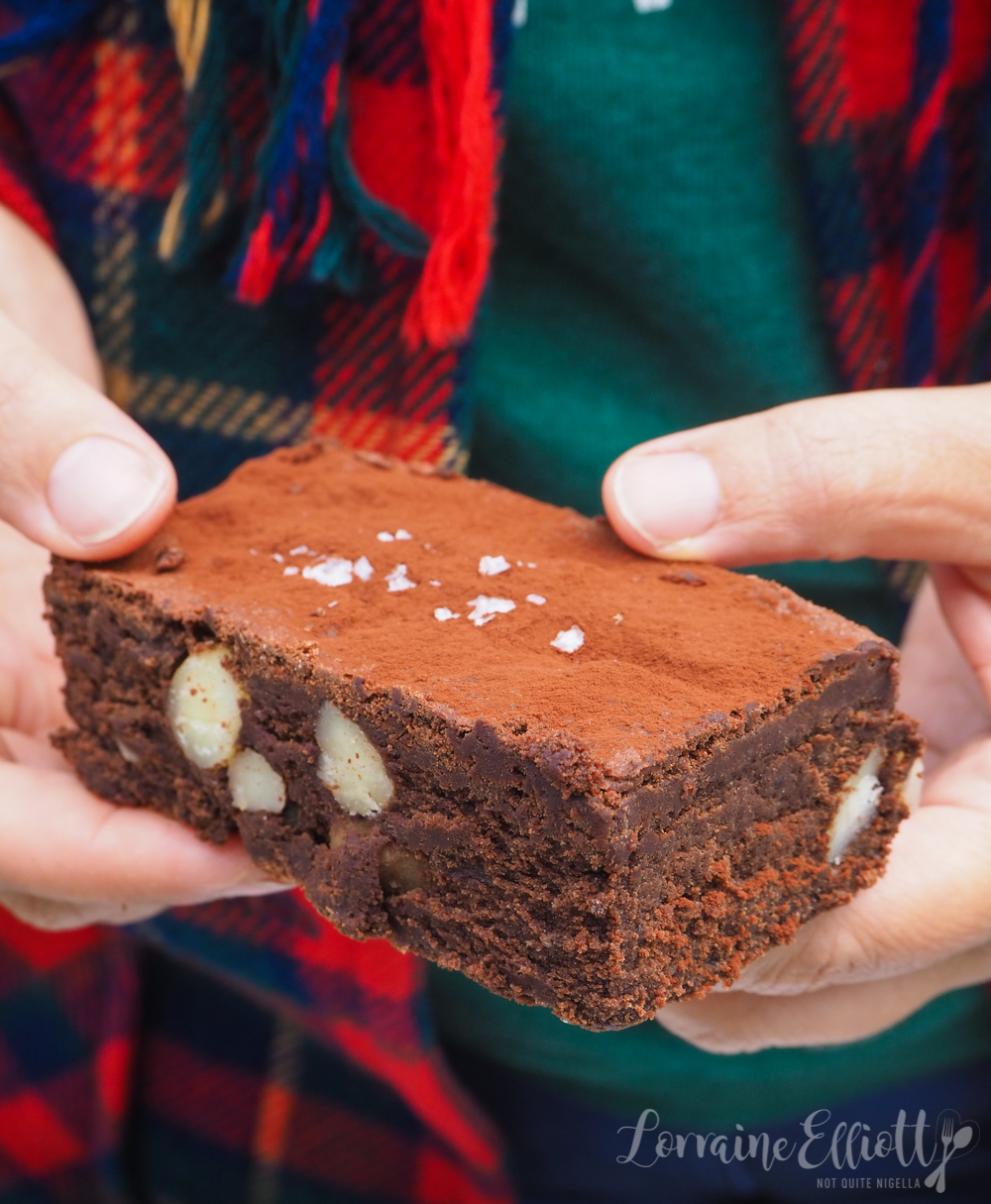 The brownie is good with plenty of nuts although it isn't the traditional gooey sort of brownie. This brownie is firmer and a bit chalky in texture. You don't really taste much of the wattle seed in this but I do like the nuts and the dusting of cocoa on top.

So tell me Dear Reader, what makes a killer sandwich for you? And do you ever split sandwiches with a friend or colleague?