Sylvia and Fran's The Upper Crust Pies at Collaroy

Located on the far flung but picturesque Northern Beaches, lies a yellow and green painted pie shop that apparently does a very good pie. Surely these very health conscious Northern beachers (the healthiest segment in Sydney apparently) wouldn't be scoffing this buttery pastries? I suppose low carb gymwork only sustains you for a while before you just have to bite into a hot pastry. 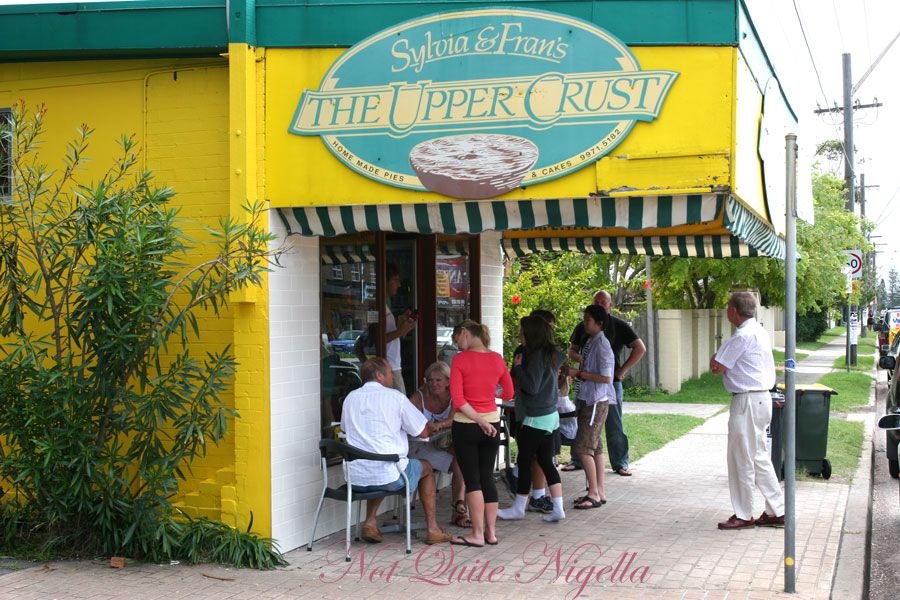 I've actually called ahead to reserve myself a pie, as I am intrigued by the chicken, brie and avocado pie and didn't want to miss out. For good measure I also reserve a cheese and bacon sausage roll. For the other pie I'll decide when I get there. Run presumably by Sylvia and Fran (whose names remind me of Fran and Sylvia Fine from "The Nanny"), I'm picturing two Jewish ladies with big hair and nasal Queens' accents behind the counter. The truth is far from it. As we drive up one sunny Saturday afternoon, past the snarls of traffic headed towards Manly beach, there's a big queue outside of people. The shop is painted in the Australia colours of green and gold with an Australian flag flying atop. There's also an area to the left where on someone's fenced off lawn, there are benches and tree stumps serve as a place to eat the pies.

It's a very small shop, more a counter with a bit of room to queue and a small side table. There's nary a Nanny character to be seen, it looks like a family business and the boys at the counter look like they could be part of the family. I have trouble deciding on my other pie, the Beef and Burgundy won Gold in the Great Aussie pie competition but that was in 2002 so it seems a while ago. The one that catches my eye is the breakfast pie, with egg, bacon, mushrooms, tomato sauce and mash ($6) so I order this along with my chicken, brie and avocado pie ($7.20) and Cheese and bacon sausage roll ($3.50). 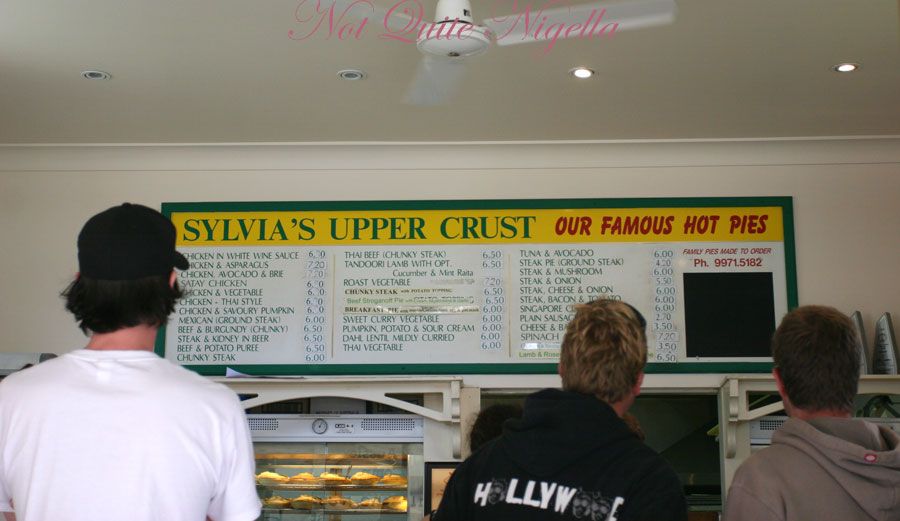 Prices are about $6.50 for most pies up to $7.20, which is a little higher than your average pie shop but obviously judging from the queue, it's not an issue. There are over 30 fillings ranging from Lamb & Rosemary, Tuna & Avocado, Singapore Curry, Mexican Curry as well as 5 steak pie variations, 7 chicken pie variations as well as a large selection of vegetarian pies with a choice of 6 fillings. 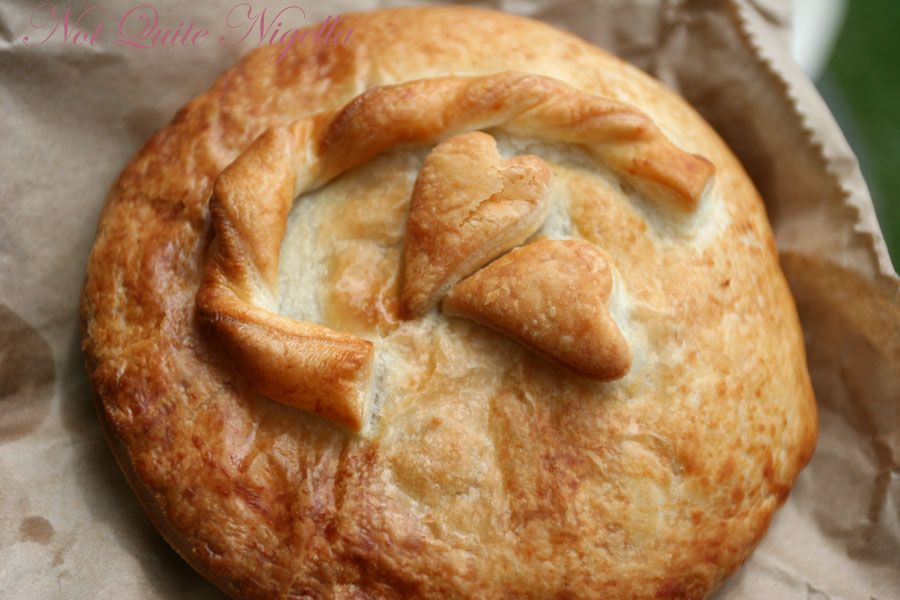 With my goodies secured we go outside to partake of our spoils. The Chicken, brie and avocado is adorably decorated with two hearts and a swirly ribbon. It's a good 12cms in diameter which is probably why it is a bit more expensive than your average pie. Opening it up, it is packed with tender chicken, brie and fanned out sliced avocado. I am one of those people that prefer to eat the innards of the pie with a fork before eating the crust separately. This way I can also taste the flavour of the filling a bit better. 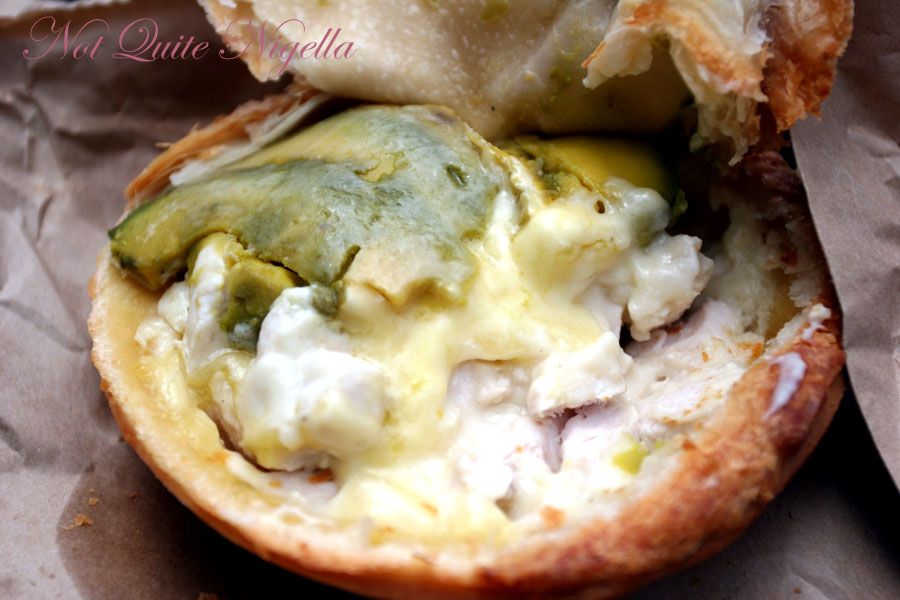 Our first forkful yields a creamy tender chicken breast filled pie (not dry breast though, very soft), unmistakably brie-ish and made even creamier by the avocado. It's very good. Taking a bite with the pastry, the brie flavour is somewhat lessened by the pastry. It is very flakey pastry on top but not as buttery as I've had. The really buttery pastry could have me enraptured but this is nice but just not buttery enough for a butter monster like me. 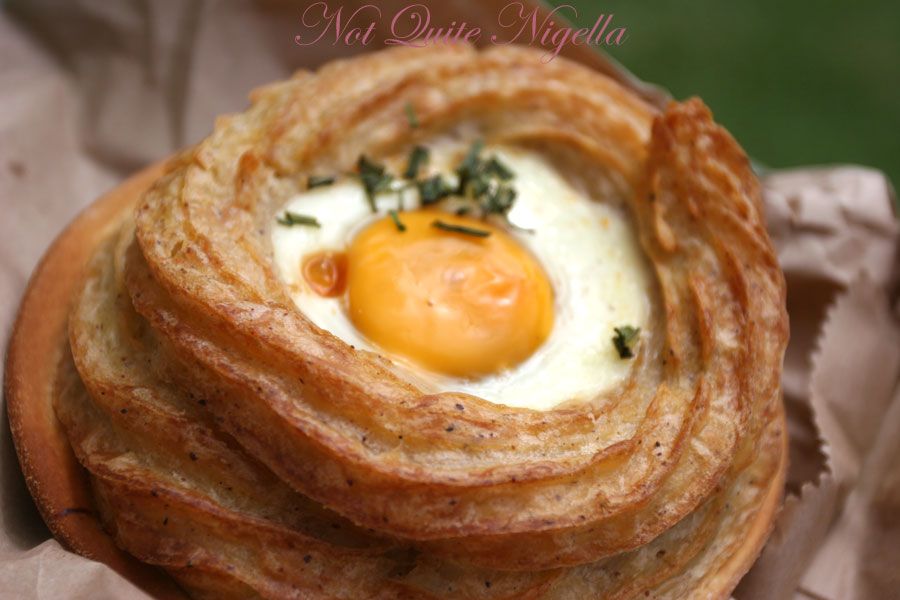 The open topped breakfast pie with egg yolk peering out at us like a curious cyclops is next. It's smaller than the chicken pie and the mash is quite dry, I suppose as a result of this being made more for the breakfast crowd than the lunch crowd and it tastes like powdered potato to me I'm afraid, which is a pet hate of mine. 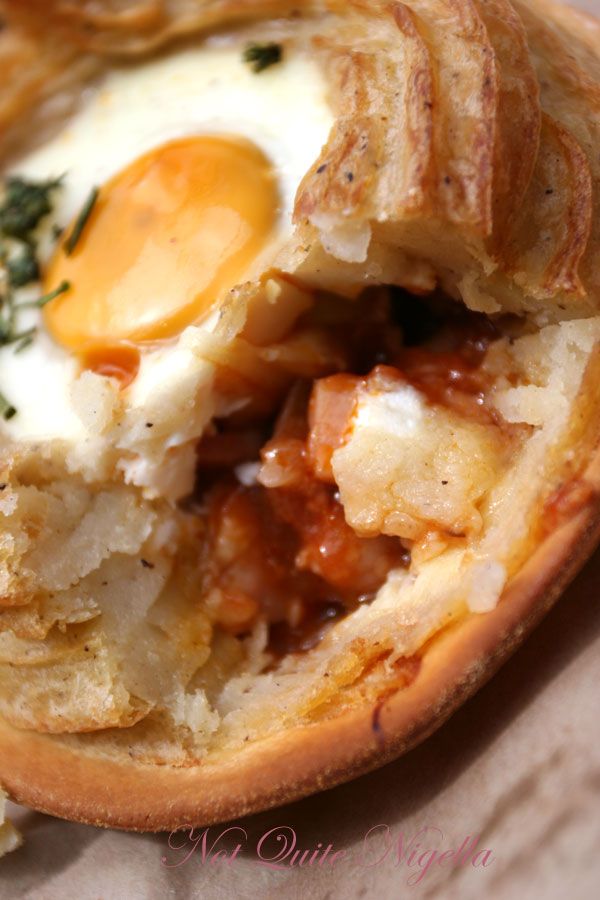 The egg by now is hard and rubbery so I leave this behind. Biting into the filling, it tastes like spaghetti bolognaise sauce with the tomato, bacon and mushrooms. There's just too much tomato sauce on it to qualify as a breakfast pie, although if they took to mash and egg off the top it would very faithfully represent a bolognaise pie. 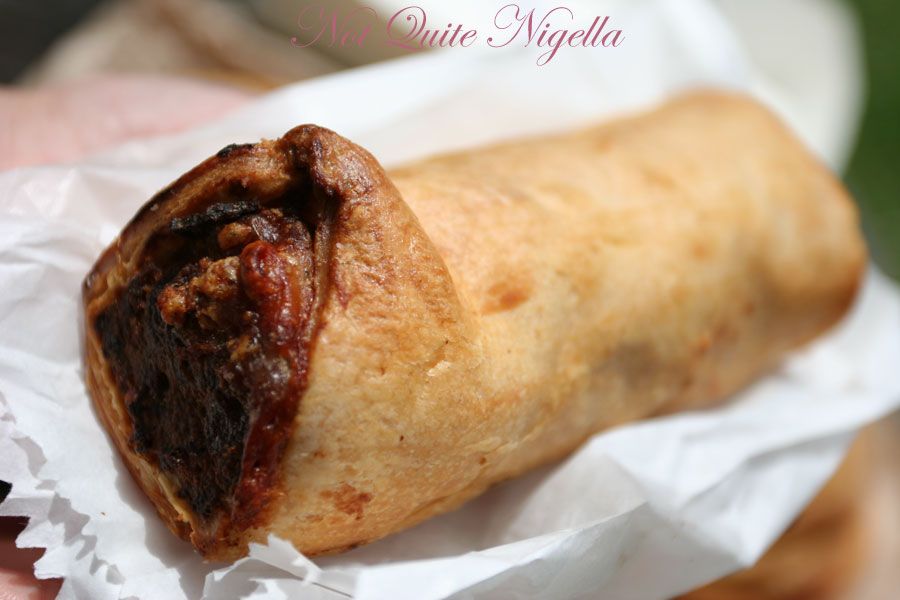 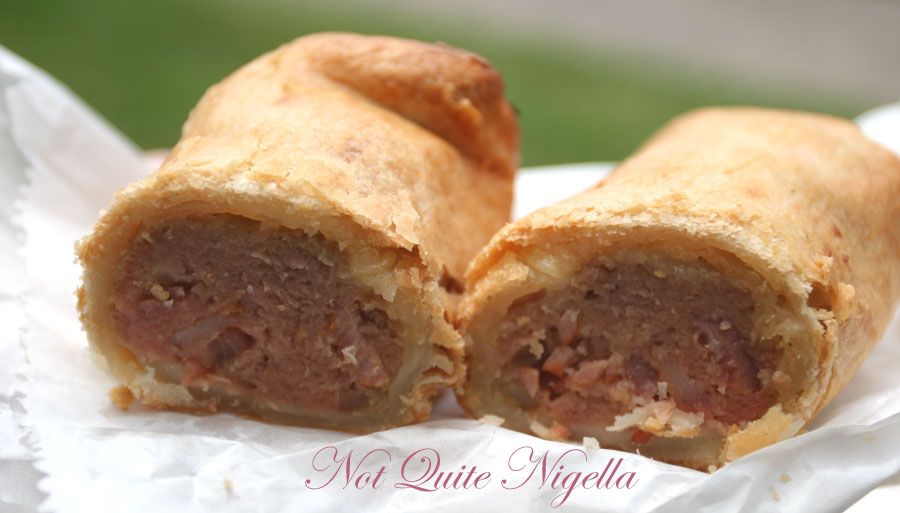 Our sausage roll is last. Cut in half it has some melted cheese at the top and the centre looks like regular sausage with perhaps some ham ground into it as it's pinker than your regular sausage roll filling. I wasn't sure what to expect here, perhaps a layer of cheese and a layer of sliced bacon on top of the sausage meat. It's fairly good but not particularly strong in the cheese and bacon flavour, especially when you compare it to the Bourke Street Bakery's sausage rolls.