Believe it or not, this is my first time to Mother Chu's. For some reason or another, we always end up elsewhere yet I always stop and have a look at the women at the front folding and making dumplings. There's something so rhythmically hypnotic about the process that keeps me entertained. Call me simple. 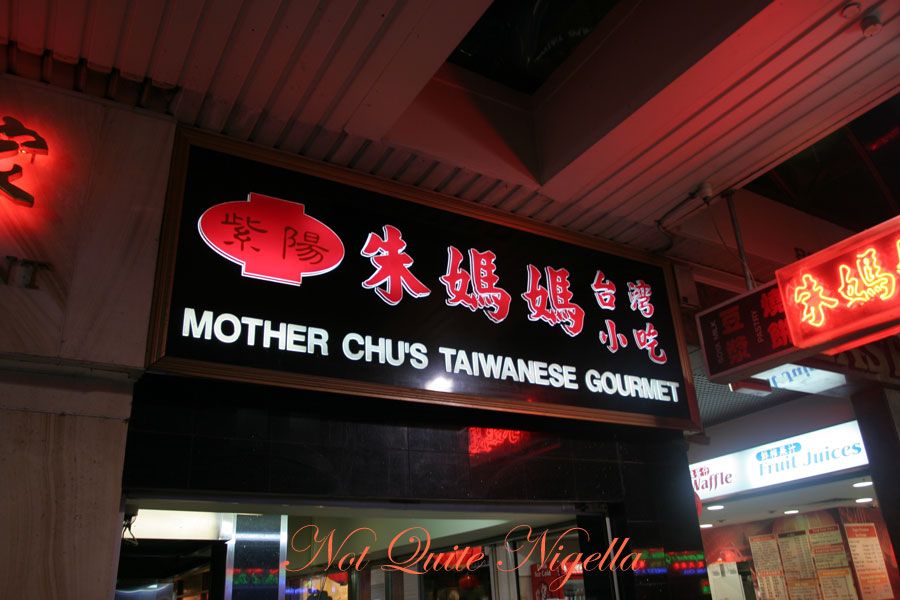 One Friday night we find ourselves hungry and in need of a good meal. We walk towards the main area of Chinatown and I see the red sign and say "Ooooh let's go to Mother Chu's!". I have no idea who Mother Chu is, perhaps she's one of the dumpling ladies. We opt for outside seating as the inside is crowded and try and make sense out of the two enormous menus we are given. It seems there is a section of small Taiwanese snacks and dumplings including savoury shallot pancakes, flaky pastries, and rice rolls. 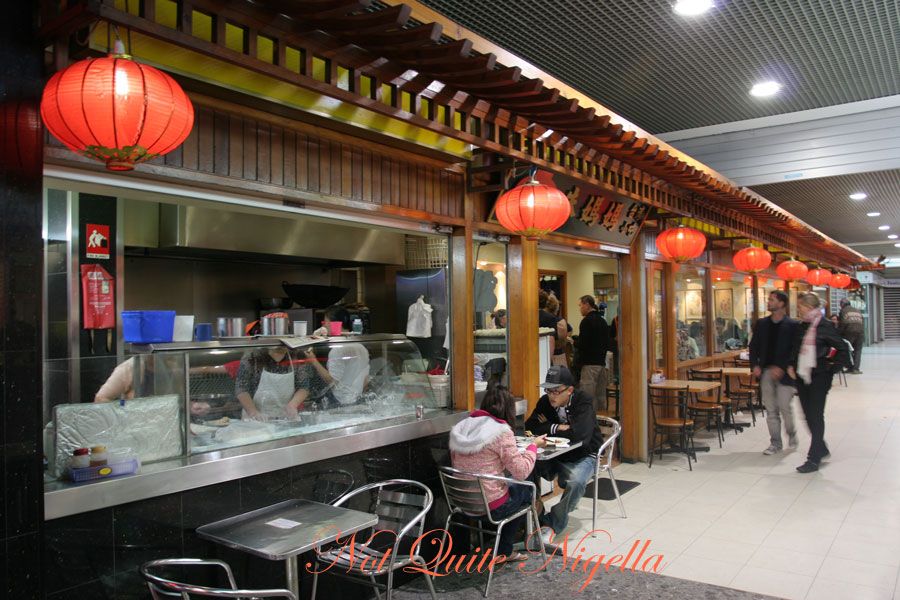 There are also noodle dishes, rice dishes and meat dishes in traditional taiwanese flavours as well as cantonses style dishes. I'm drawn to the Angelica Mutton soup as I've only had mutton once in my life but unfortunately they are out of it. As my husband loves beef noodle soup, he orders a Szechuan version (spicy) $7 with suan choi (hand made pickled cabbage) $1 extra and I order a pork mince with rice $5 and we order some snacks to share including a pork flakey pastry $2.20, beef pancake $2.50, glutinous rice rolls with pork floss $3 and spicy seaweed salad $4. That's $24.70 she says and holds out her hand. Oh and you need to pay when you order.

Before we've had a chance to even contemplate our surroundings, the soup, mince with rice and seaweed salad arrive. We have to ask for water a few times but finally get it fourth time lucky. 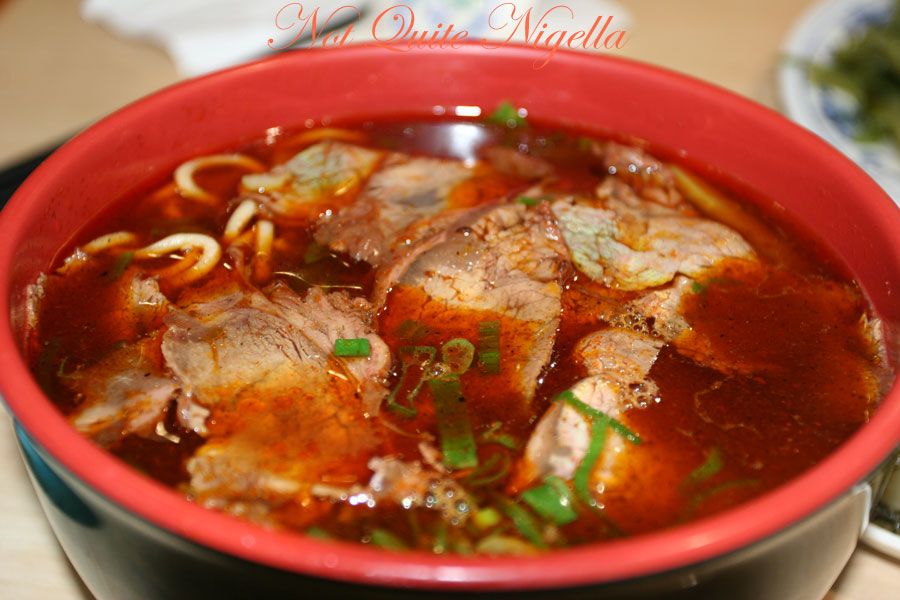 The Szechuan beef noodle soup has a slick of chili oil at the top and features shanghai noodles, thin slivers of roast beef and an spicy and indeed fairly fiery chili oil infused broth. The noodles are way too soft for me and whilst the beef is nice, the broth is a little plain and seeming flavoured mostly of chili oil. I leave this to my husband who confesses that it is too hot for him and unlike most noodle soups where he will finish every drop of the soup, most of this soup is left behind. 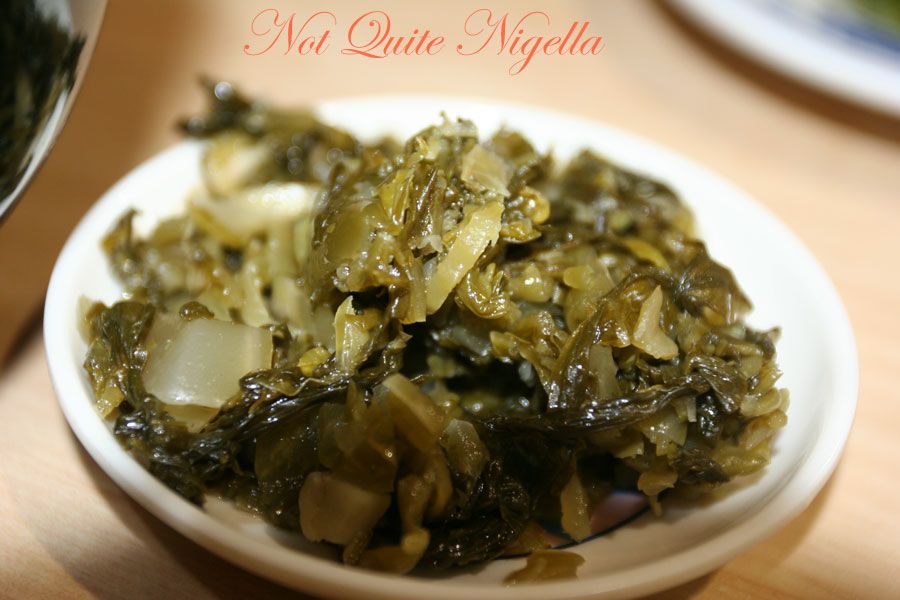 The Suan Choi is a small side dish of cabbage, full of flavour and sesame oil and quite delicious. 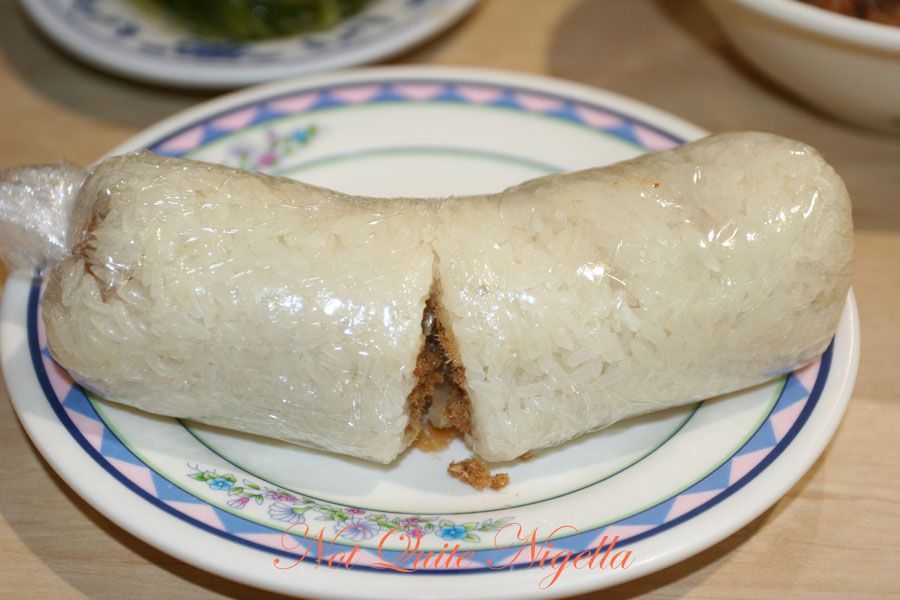 I try the Glutinous rice filled with pork floss -it's wrapped in glad wrap, warm to the touch and cut in half to reveal the filling and presumably for easier eating. it's about the size of one and a half sushi rolls. It's a touch dry and could do with something a little more moist inside but I do love glutinous rice and am happy enough to polish this all off myself. Interestingly, inside is a stick of fried bread among the pork floss which adds crunch and that oily unmistakably fried bread stick flavour. 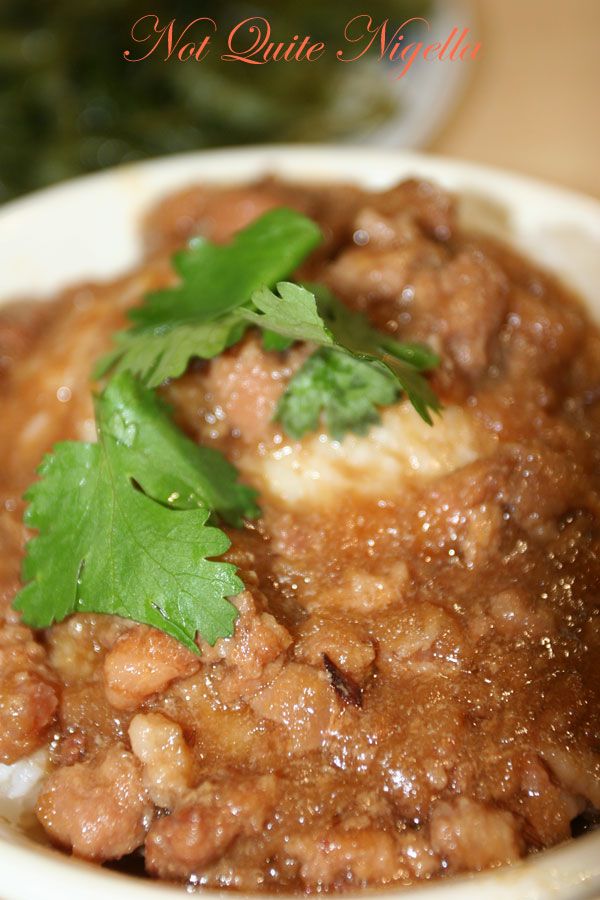 Next I try the ground pork mince on rice. The rice is a little gluggy for my taste and the pork mince, although tasty could do with more of a ginger flavour. It's nevertheless pleasant enough and filling and cheap at $5. 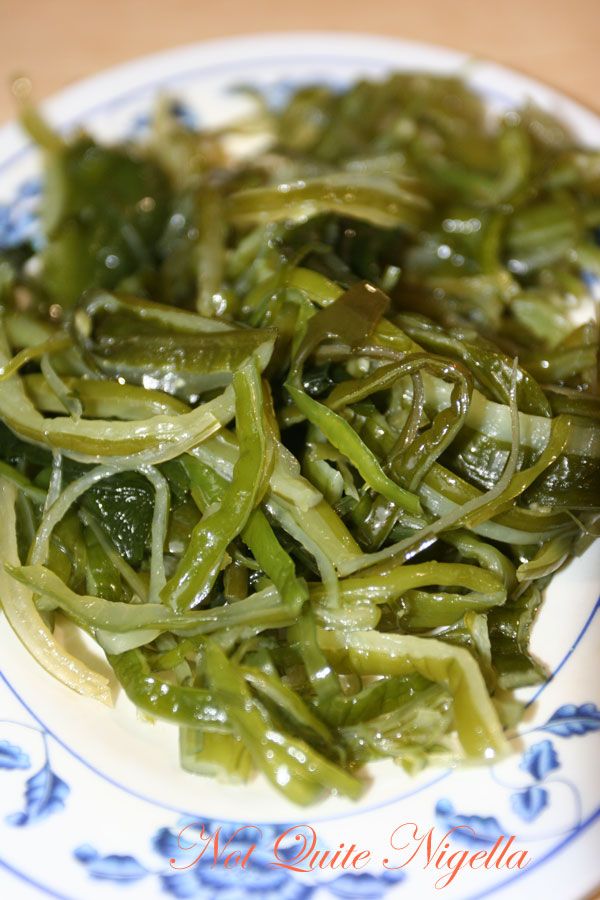 The spicy seaweed salad is normally one of my favourite items on a Japanese menu. However, as Mother Chu's is Taiwanese I expected some sort of difference and the difference here is the seaweed. In Japanese establishments, seaweed salad is usually bright neon green with ultra thin thread-like strands. Here, they're a much duller green and thicker. I prefer the texture and flavour of the japanese version but for $4 and such a big plate this isn't too bad. 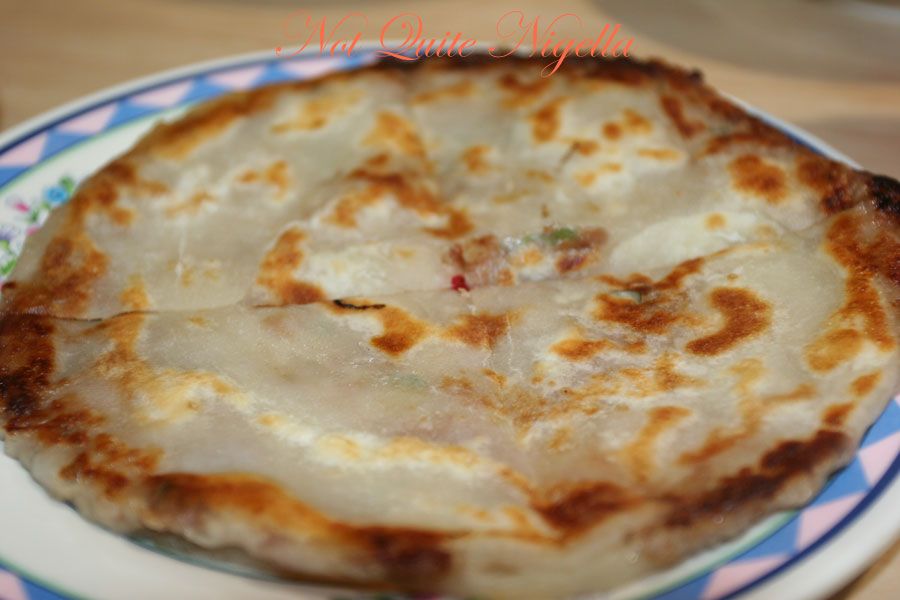 By now, our last two snacks have arrived. The beef shallot pancake $2.50 is like a mini pizza and thinly filled with shallots and ground beef. We ask for chili sauce which nicely rounds out the flavour. 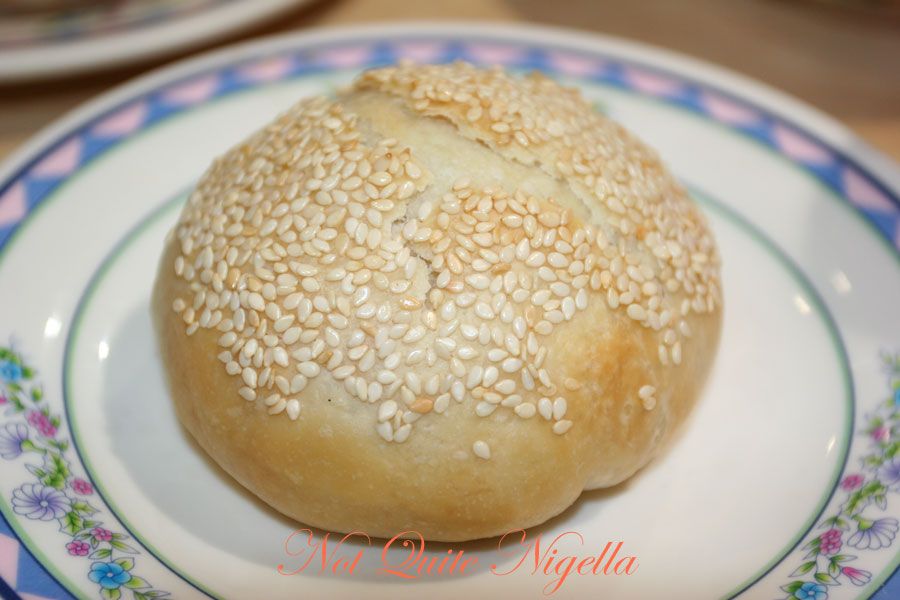 The Pork filled flaky pastry $2.20 is a sizeable warm, sesame seed coated pastry bun which is indeed very flakey inside. The smart way to eat it would be to pick it up and take a bite unlike what I did which was to try to cut it with utensils which was difficult and messy to boot. The pork filling is similar to that of pork dumplings and if I weren't so full I would've happily finished it. 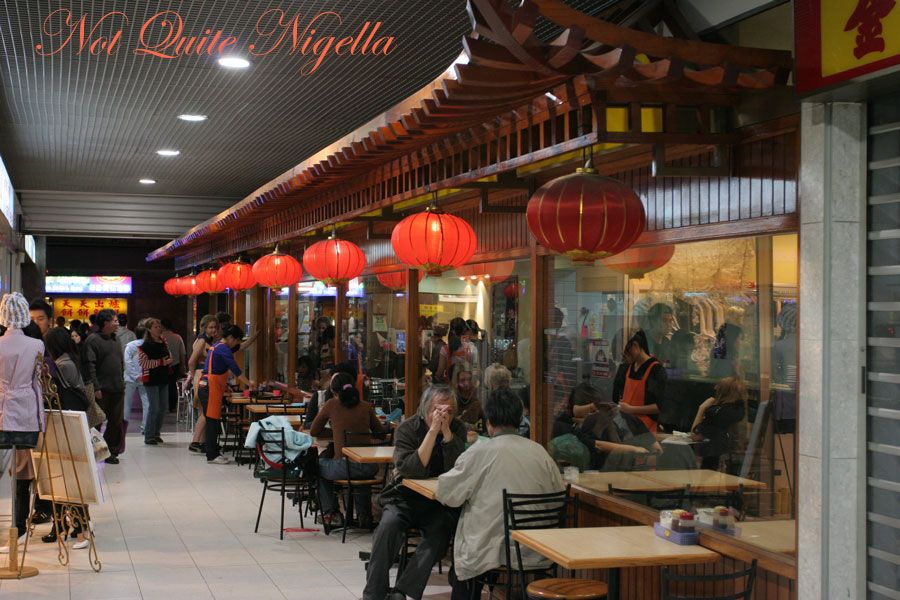 Even though paying at the beginning of the meal at your table might seem a touch odd, when we're finished we're glad as there's no hailing the waitress for our bill and paying, we simply get up and leave. But not without watching them make the dumplings at the front first.