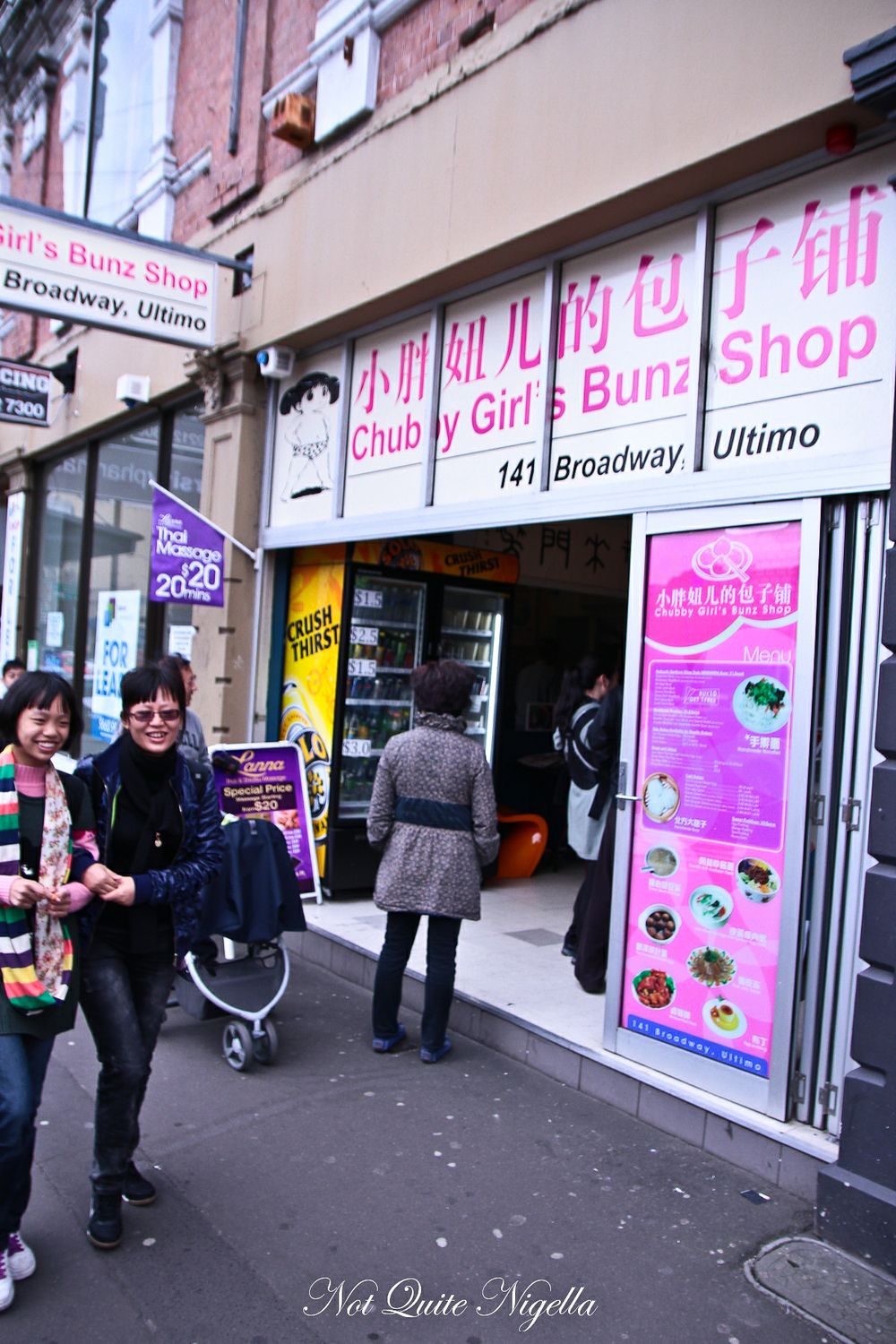 Although I don't snack a lot during the day, I have to admit that I'm a big fan of snack foods. Every country or culture has snack foods and in Northern China, a bowl of soup noodles or dumplings would suffice instead of a packet of chips or a chocolate bar. One afternoon, while driving past Broadway, I spotted a shop name that caught my eye. Chubby Girl's Bunz Shop. 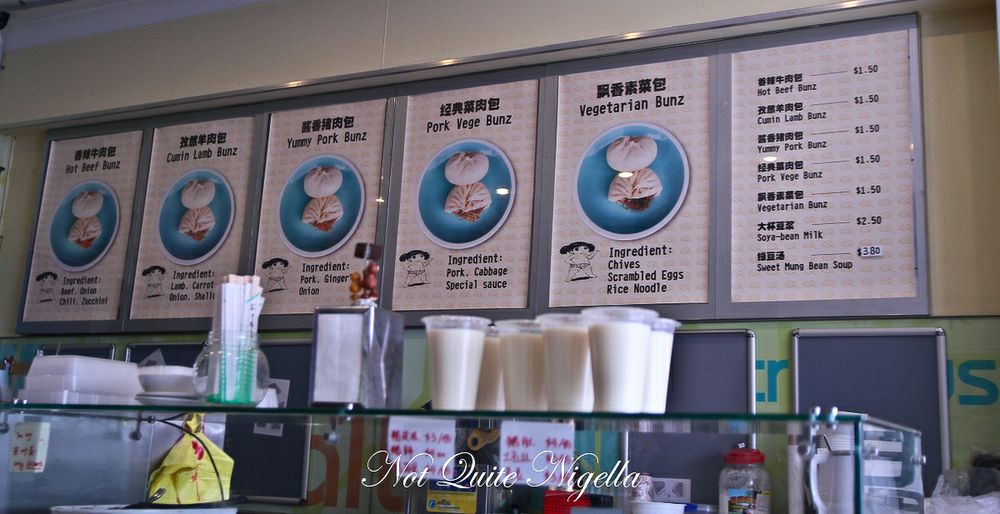 Not fancy by any means, there is a small area to eat in at which seats about six people - eight at a pinch and jostling of elbows. The Chubby Girl in question is apparently an accountant and the girlfriend of the young man that stands behind the counter and who makes the dumplings fresh every day. "We need to make them fresh every day to survive on this street. So many businesses close down here." Along with eight varieties of dumplings made fresh, they also do a range of noodle soups with different additions. Congee with century egg, mung bean soup and pig's trotters also feature on the small menu. Some signs are only in Chinese but if you can't read Chinese, one of the outside doors features a colourful menu in English. 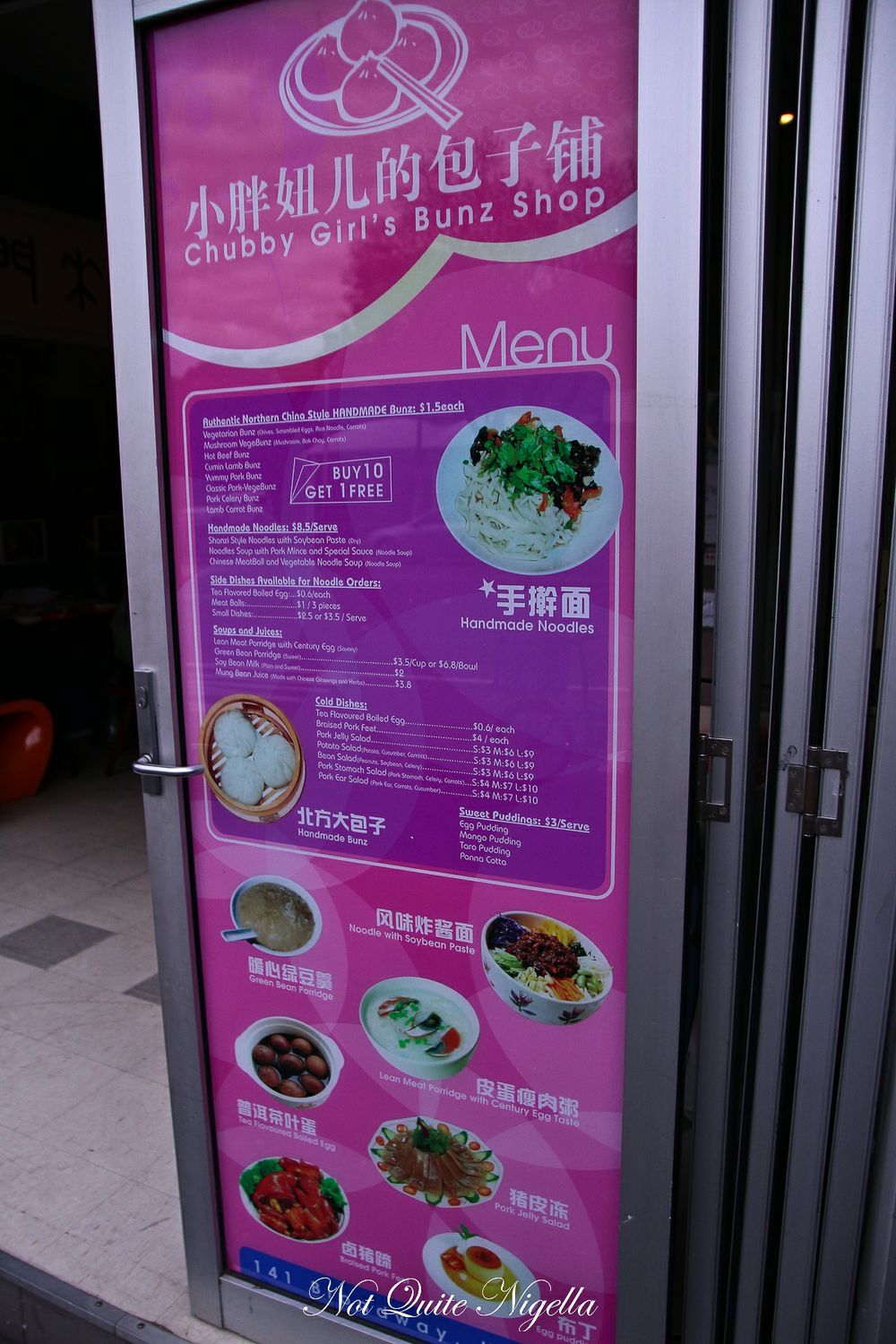 The steamers are busily chugging out steam throughout the restaurant. There is Thai massage offered in a corner of the premises behind a curtain -steam a bonus there too, and the security camera footage is full of steam too. There are four types of buns available at the moment with the other four varieties being currently steamed. 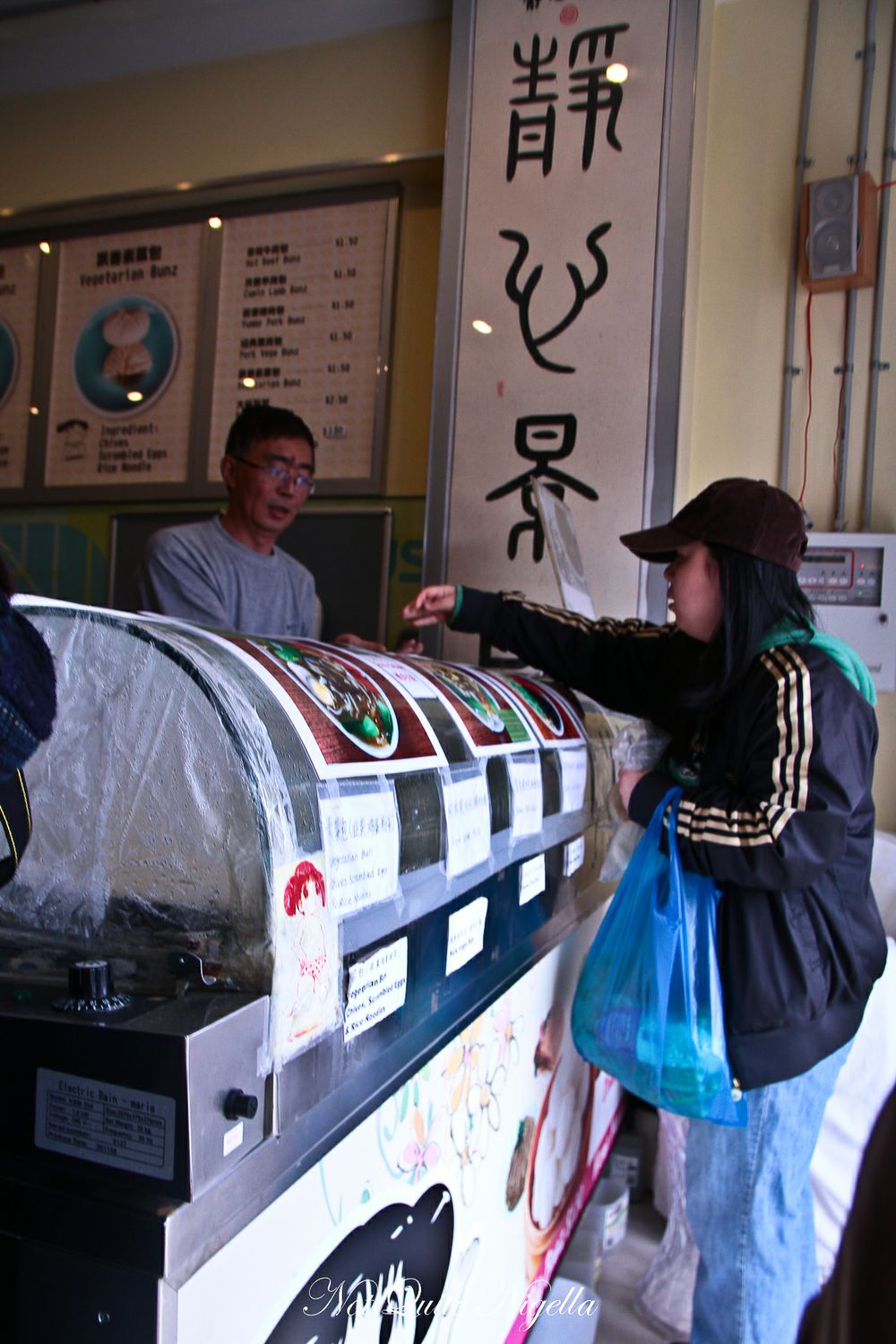 We ask for one of each of the four buns and they raise the wet cloth held in place by bulldog clips that is keeping the buns warm and they place two on a plate. An order for noodles is made and we sit down and try the buns while we wait for these. There is vinegar, soy sauce and a chilli sauce paste on the counter and we help ourselves to some chilli paste. 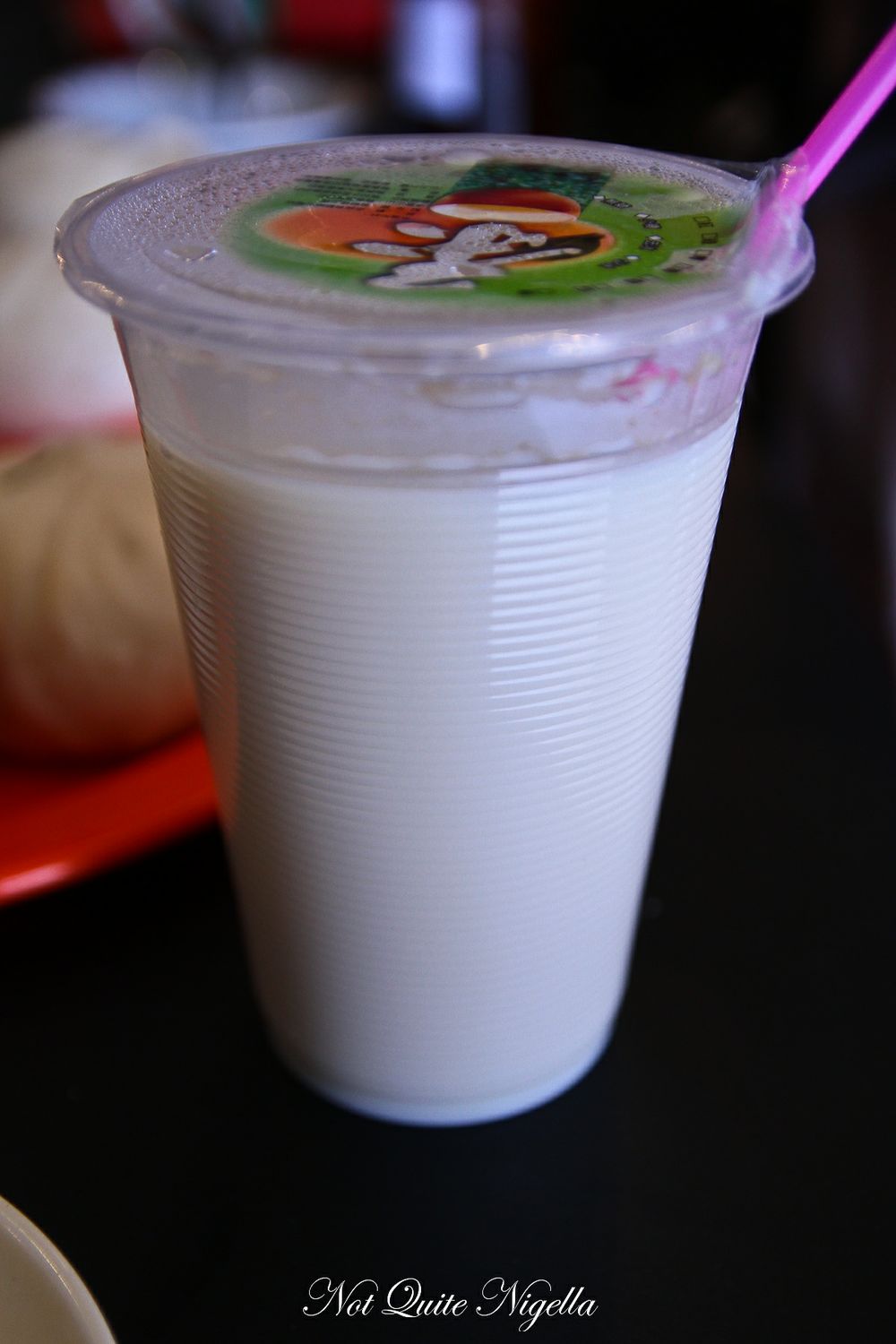 The soy bean drink takes me back to when my father used to make soy bean milk from scratch. Chinese soy bean drink is thinner and sweeter than soy milks that you can buy at the supermarket and here it is served hot which warms us up quite nicely indeed. 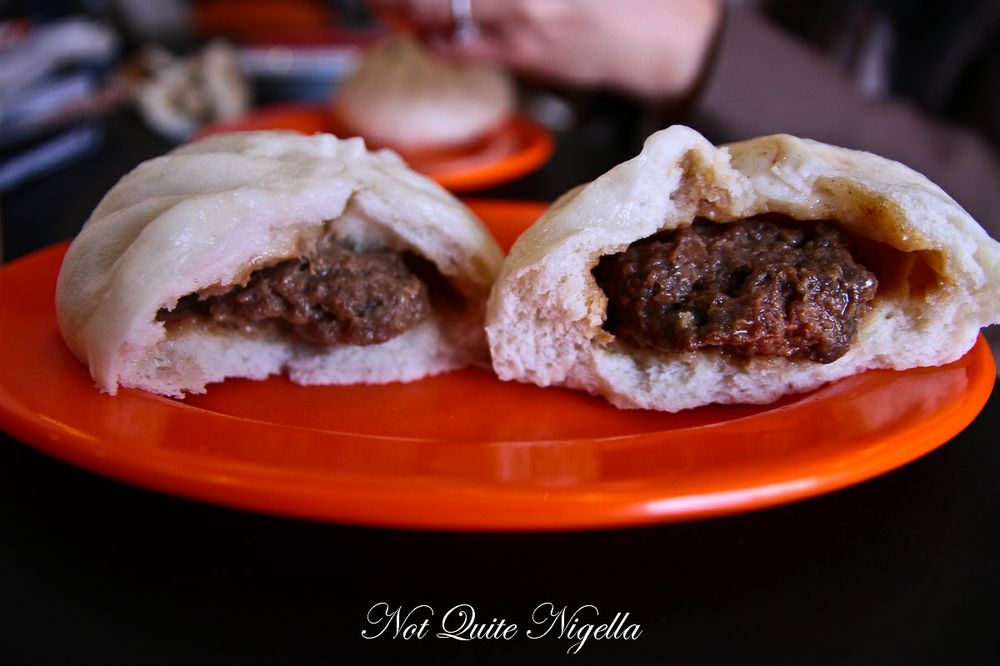 Each dumpling is $1.50 each and they're large steamed buns about 10cms in diameter. We start with the lamb and cumin bun which a delicious filling well spiced with cumin. The bun itself is soft and melting in the mouth yet not damp at all, at a guess this would be from the fact that they are freshly made and not frozen. The hot beef bun has finely minced beef and is another favourite with a small amount of soup inside to make the inner moist. The ratio of bun to filling is good too especially as the bun isn't too stodgy. 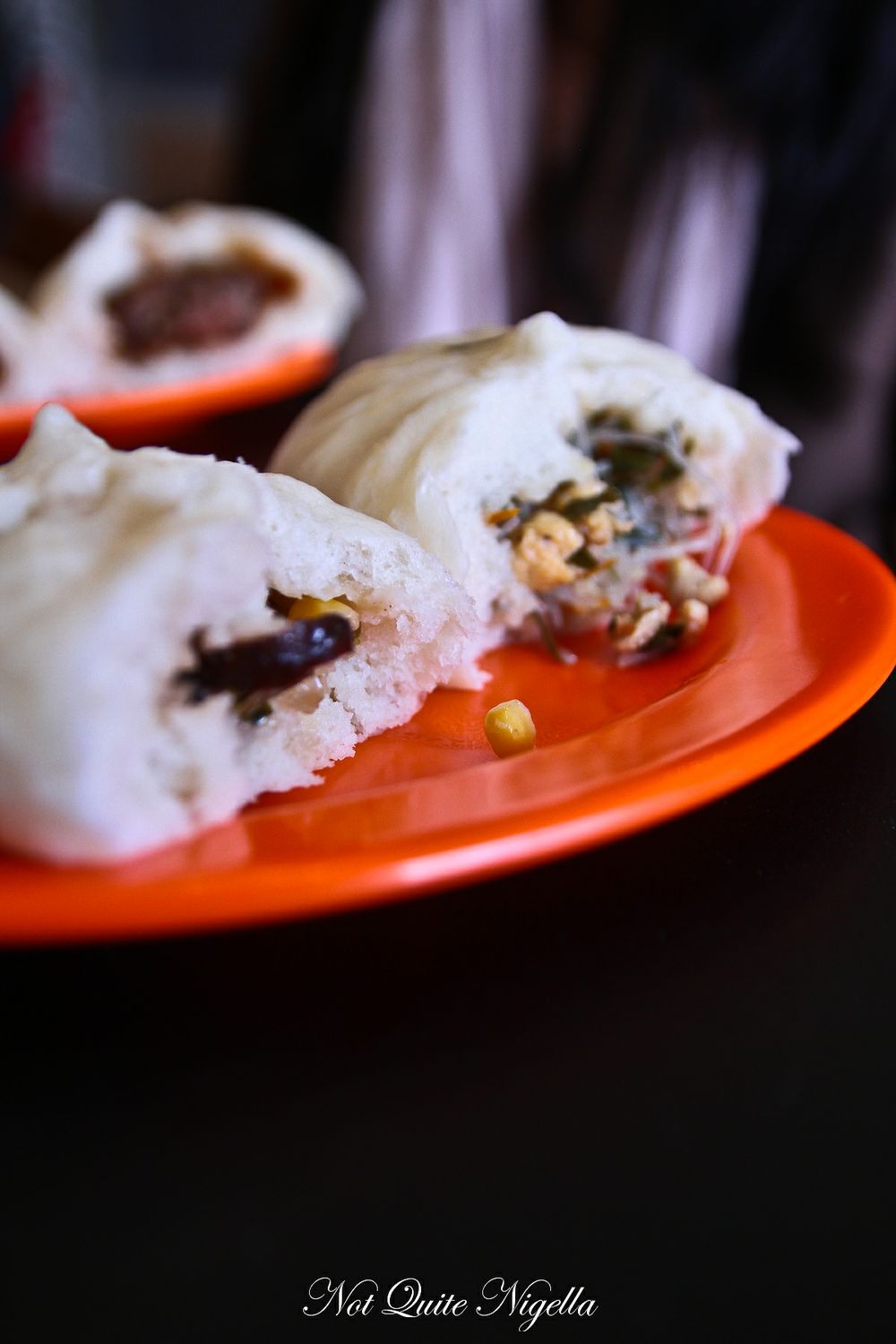 Mushroom & vegetable bun and egg,vegetable and vermicelli bun $1.50 each

We try the two vegetarian buns, one is a mushroom and vegetarian which is strong in shiitake mushroom which Mr NQN likes. I prefer the egg, vegetable and vermicelli bun which has a little crunch from the noodles and vegetables. 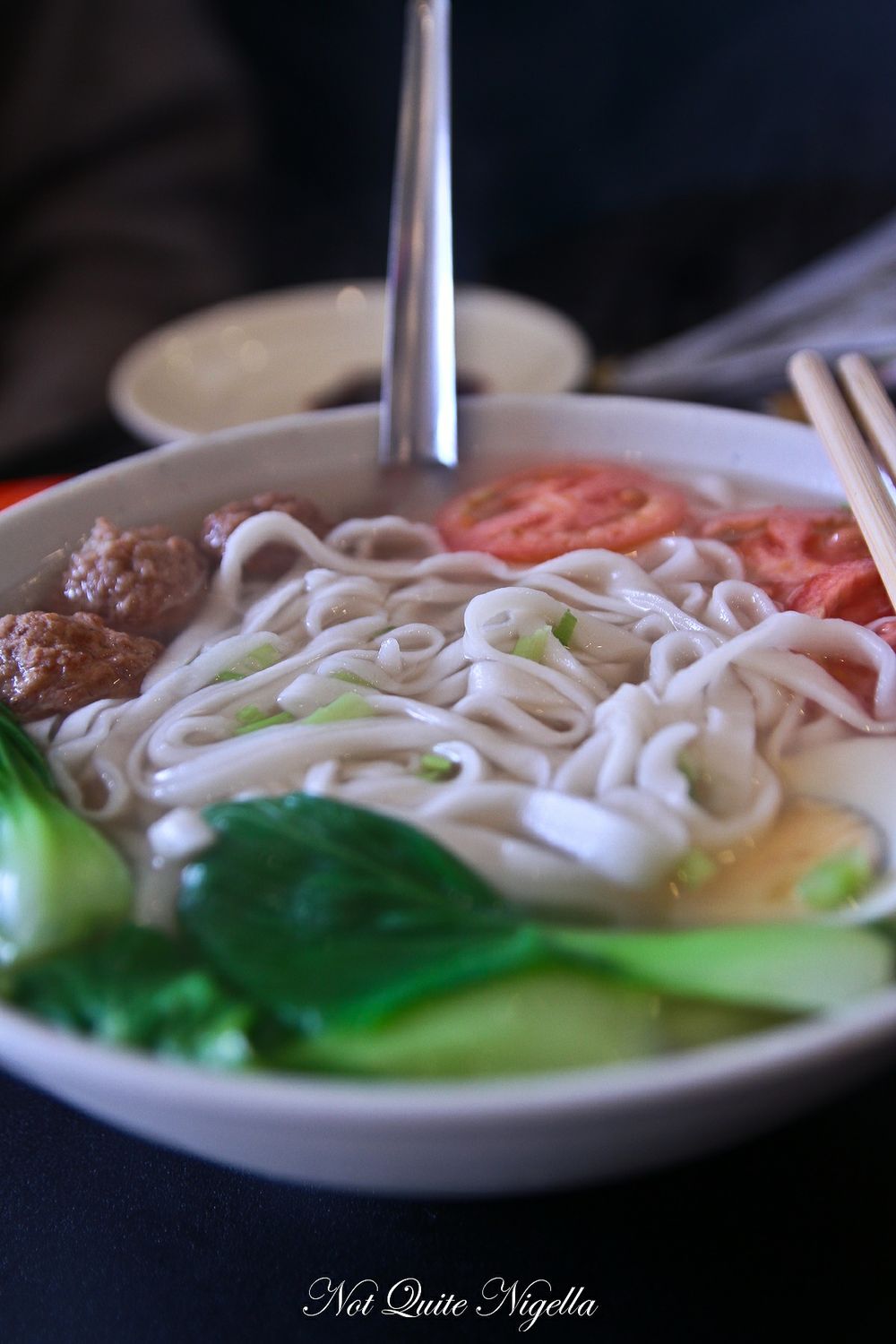 Our soup comes out and it is full of hand made noodles with a springy chewy texture that you can only really get from fresh, hand made noodles. The broth, well it's a bit pale and needs a bit more flavour for our taste although I've had broth just like this in China. Perhaps it's also eating this after the chilli dipped buns that makes the broth less flavoursome in comparison. There are three small pork balls, some tomato slices, half a boiled egg (although a tea egg can be added for 50c) and some baby bok choy. 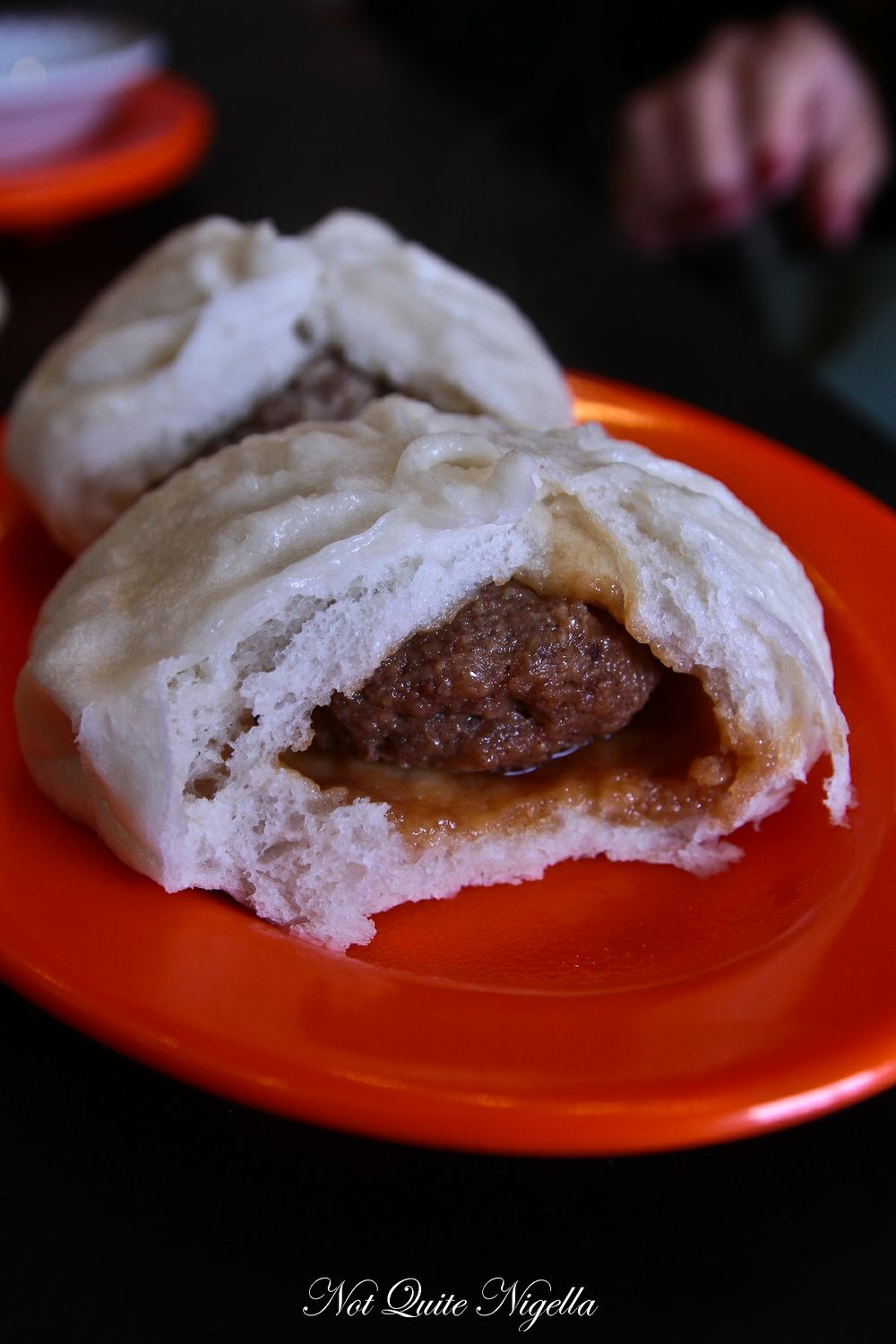 We enquire as to when the rest of the buns will be out and are told that they've just finished steaming. There are three pork buns and one lamb bun left to try and so thankful that we haven't had any breakfast and Mr NQN ate a light dinner we order all of these (research purposes darlings!). The yummy pork bun was a favourite for both of us with the finely minced pork and ginger filling. The pork and vegetables are good all rounders, mildly flavoured and with a filling not unlike those Shanghai steamed dumplings. 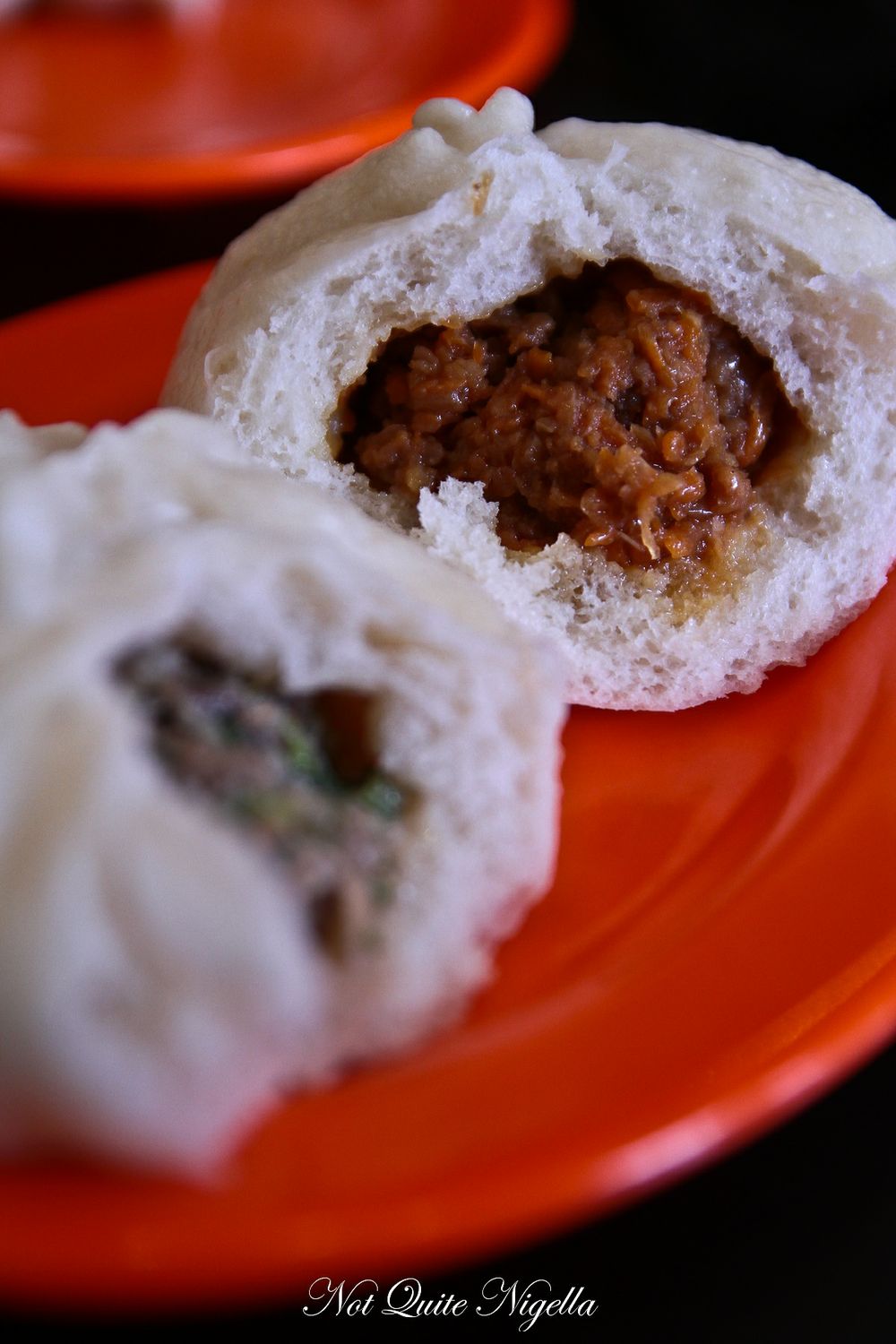 The lamb and carrot wasn't bad but I preferred the lamb & cumin out of the two lamb buns. The carrot did impart a nice sweetness but I liked the cumin because sometimes lamb can smell a bit muttony otherwise. The pork and celery has quite a bit of celery, although I'm not a big celery fan there isn't enough to overwhelm it and it gives it a good texture and it has a nice amount of ginger in it too.

I suspect that after sampling eight of these and a soup between the two of us, there isn't just one chubby girl around ;)

So tell me Dear Reader,  what is your favourite snack food? And how often do you snack? 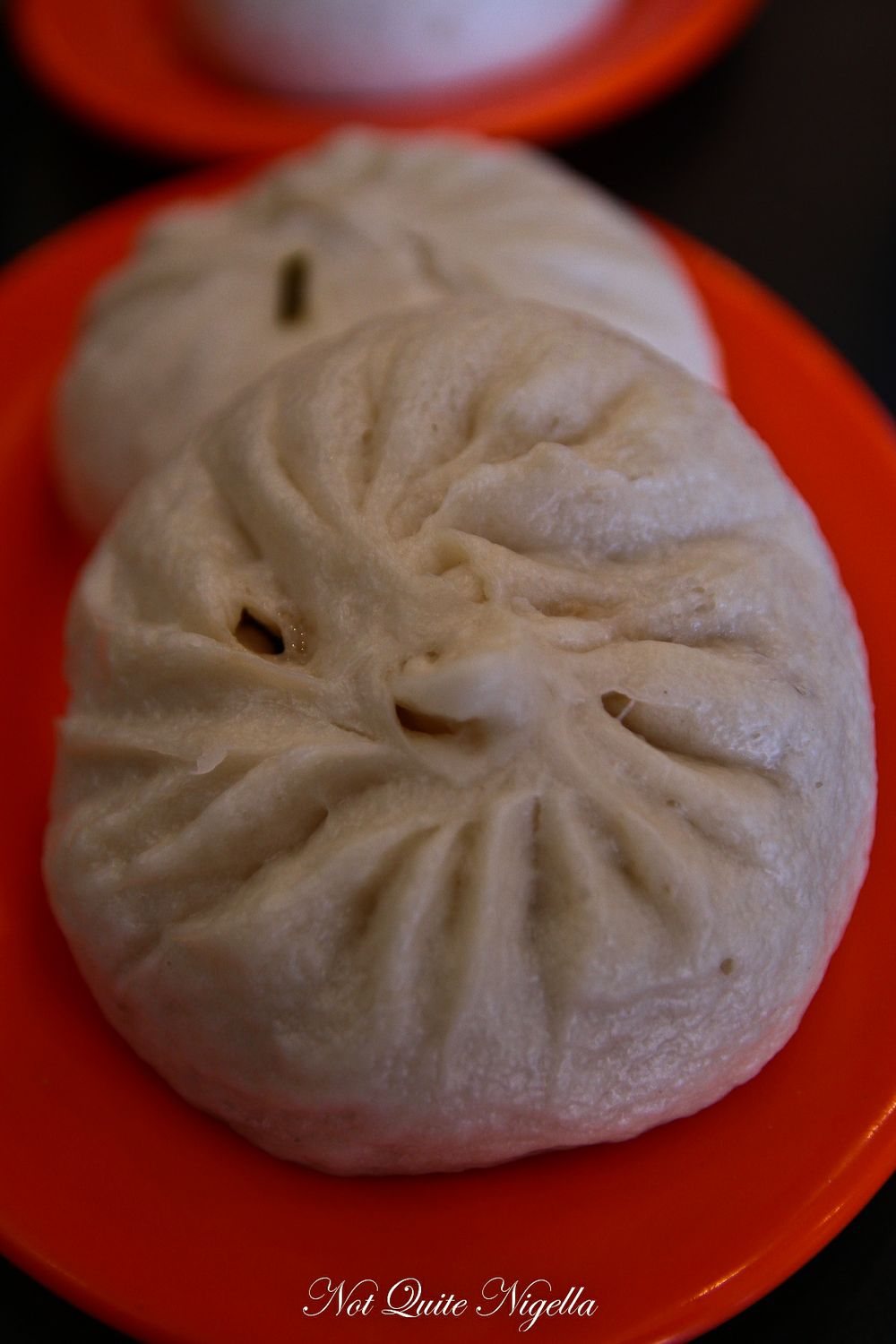