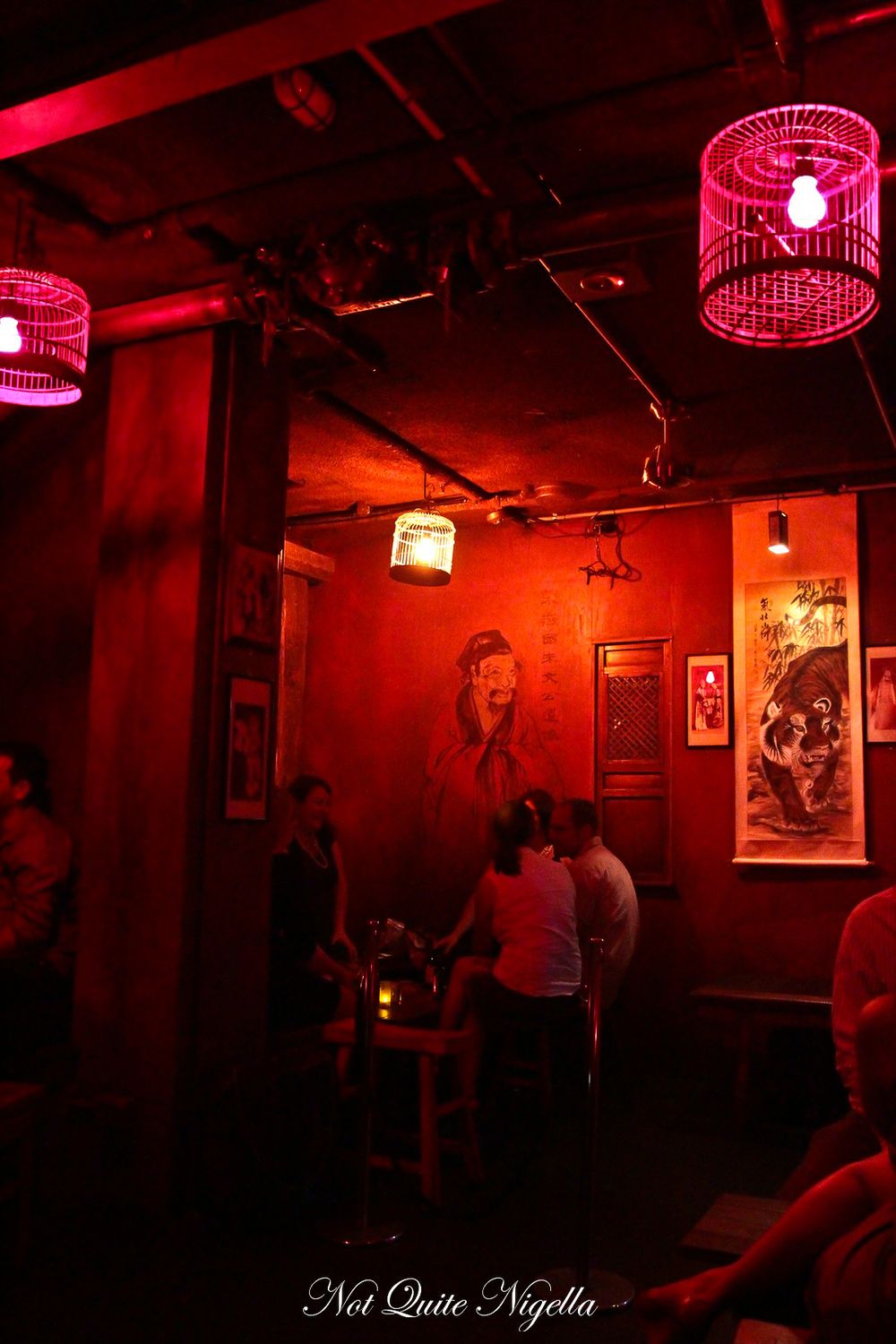 I always heed a warning and I was told in no uncertain terms that Uncle Ming's was:

a) hard to find, the only keys to its existence are a somewhat camouflaged bicycle, some chalk writing on the pavement and a bouncer.

b) it's dark, like dark, dark and housed in the basement level of a building

c) it's unashamedly Asian themed, with incense burning, glowing red lights and sepia tinted photos that remind me of my parent's photo albums 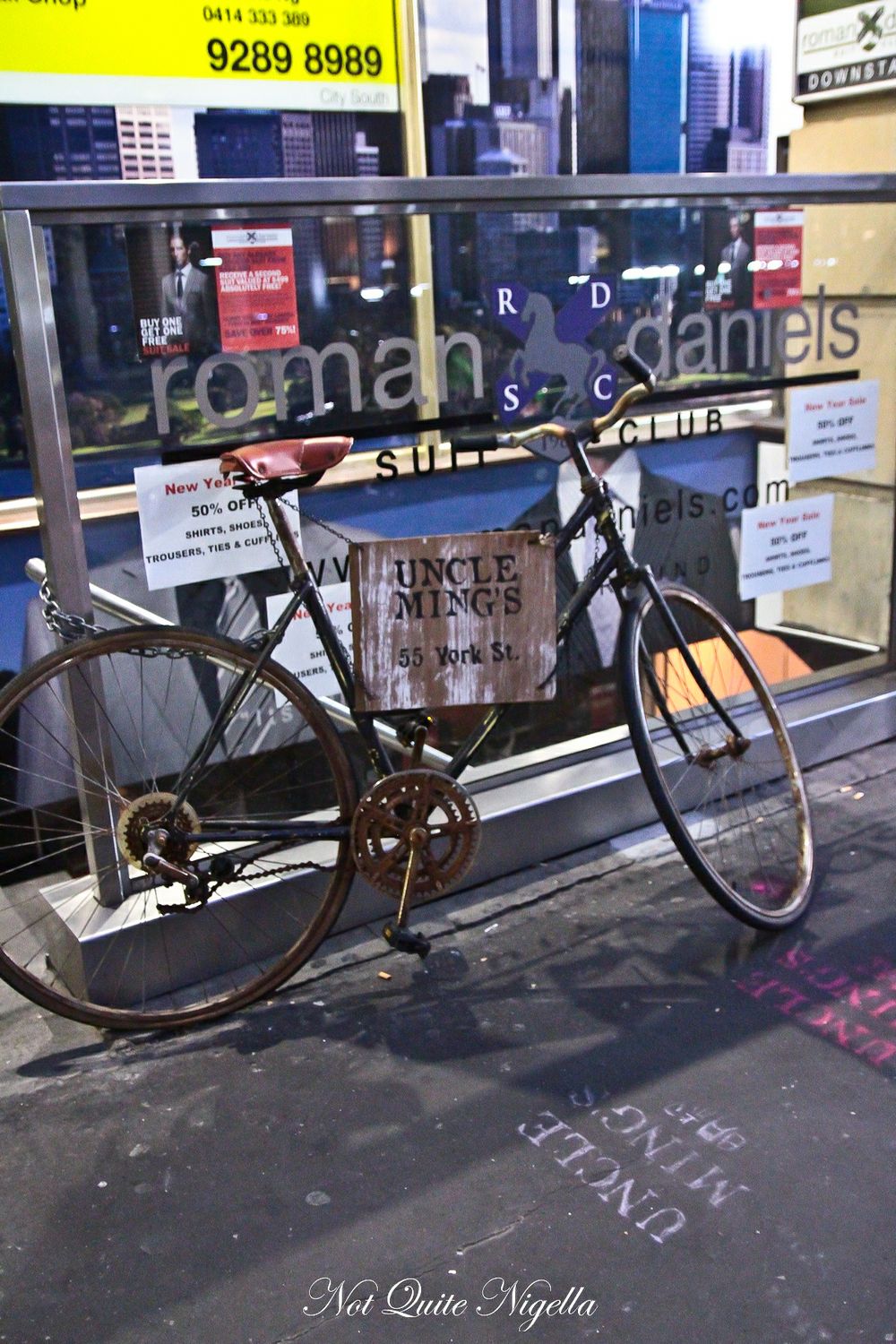 I'm meeting Freaky Flier armed with all of these bits of knowledge and imagining us wandering up and down York Street aimlessly. We needn't have worried, the number is clearly signposted and bouncer and the bike tell us that we are at the right place. We head downstairs where we hear music and smell the incense. Walking through the rather plain area outside for a neighbouring suit shop is like transitioning from black & white to colour. 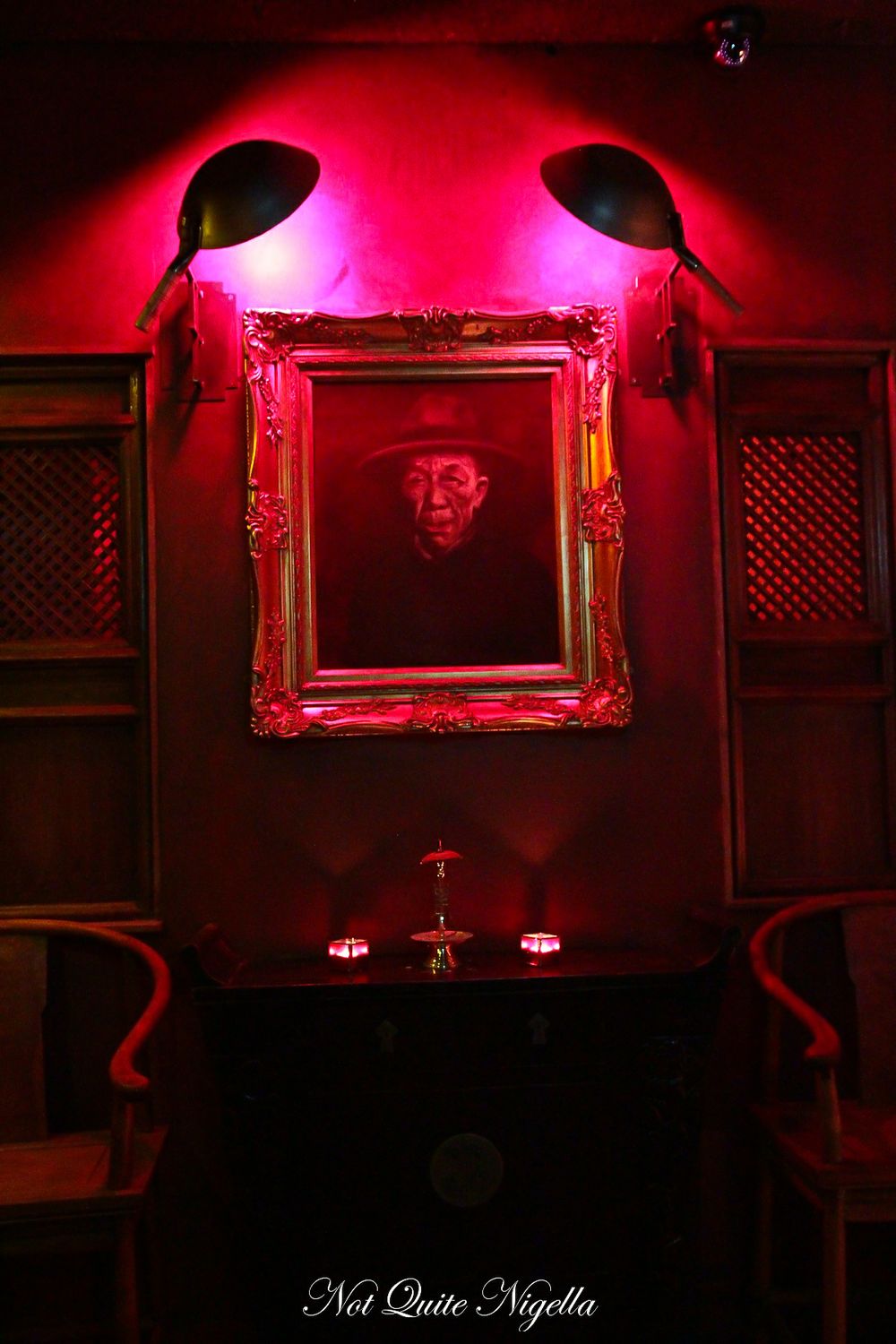 Reminiscent of a speakeasy, Uncle Ming's is packed and there's an altar to Uncle Ming shrouded by two red lights in the shape of woks. A wall has posters of Chinese retro glamour girls. And if you look closely, there are subtle drawings of Chinese erotica on the walls. The sinks in the bathrooms are made out of painted woks-you get my drift...it's themed! 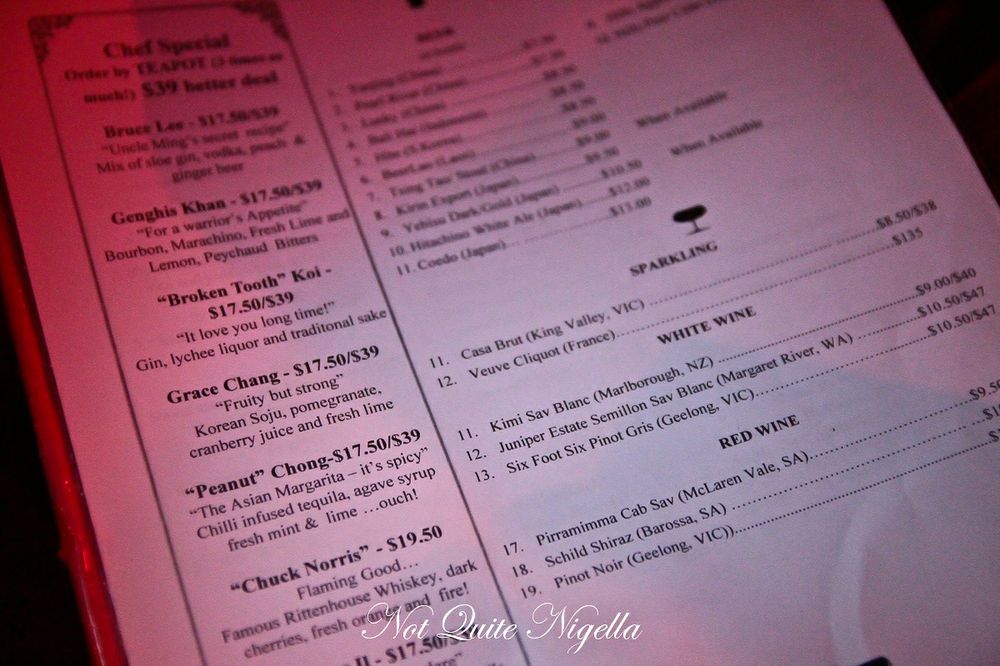 It's Friday night which is probably one of the busier nights in this C.B.D. small bar. All but one small table is taken by patrons and we ease ourselves onto the wooden stools and huddle over the wooden table. It's not exactly comfortable and we keep an eye out for better tables. Freaky Flier grabs the menu and we choose drinks. Since I'm not driving, we decide to share one of the teapot cocktails. There's a range of Asian spirits too including many types of sake as well as the usual beers, cider and spirits. The atmosphere is friendly from both the staff and the other patrons. 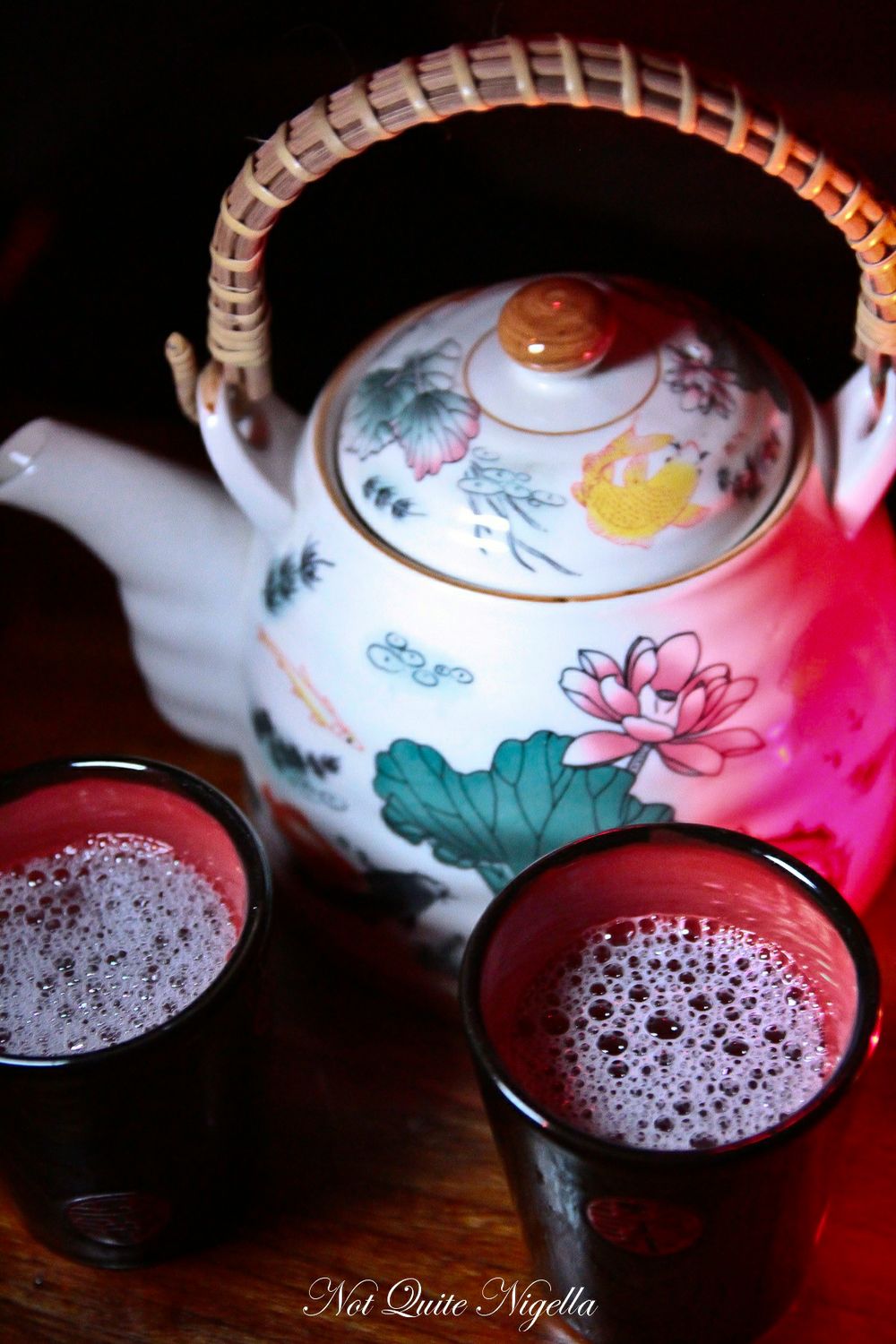 Cocktails can be bought by the glass or by the ceramic teapot which serves three. Dubbed as "Uncle Ming's Secret Recipe", it includes sloe gin, vodka, peach and ginger beer. It's also very drinkable and sweet like peach and ginger iced tea so that you keep drinking until you realise that you've drunken a bit too much too quickly. This is when the dumplings come in handy. 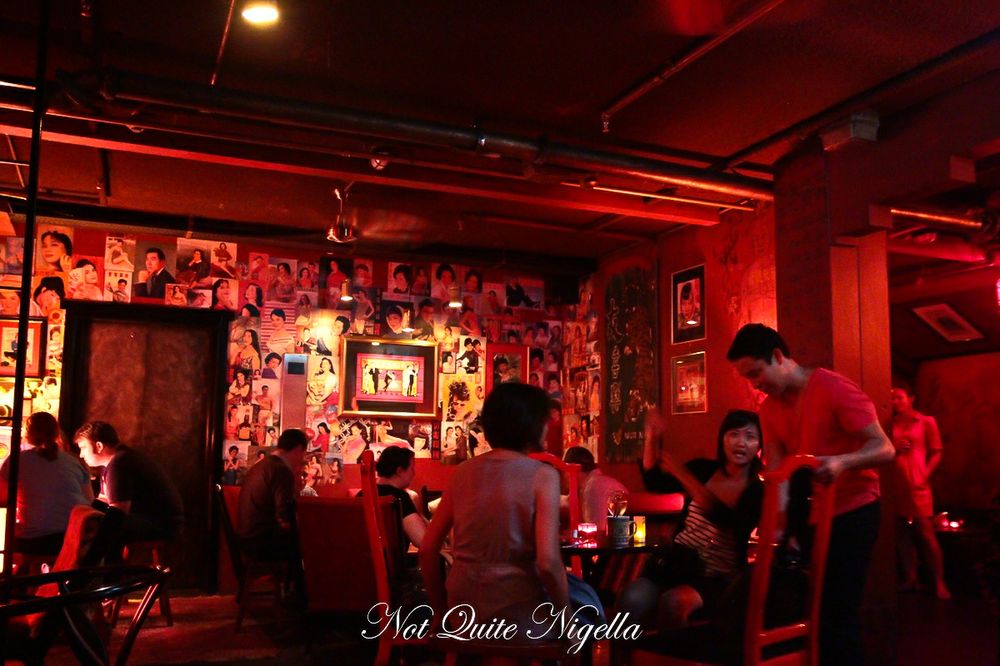 This evening, the section that we're sitting in has been booked so everyone sitting there has been asked to relocate. We spend a few minutes sitting at the bar and then a table frees up. A proper table - hooray! 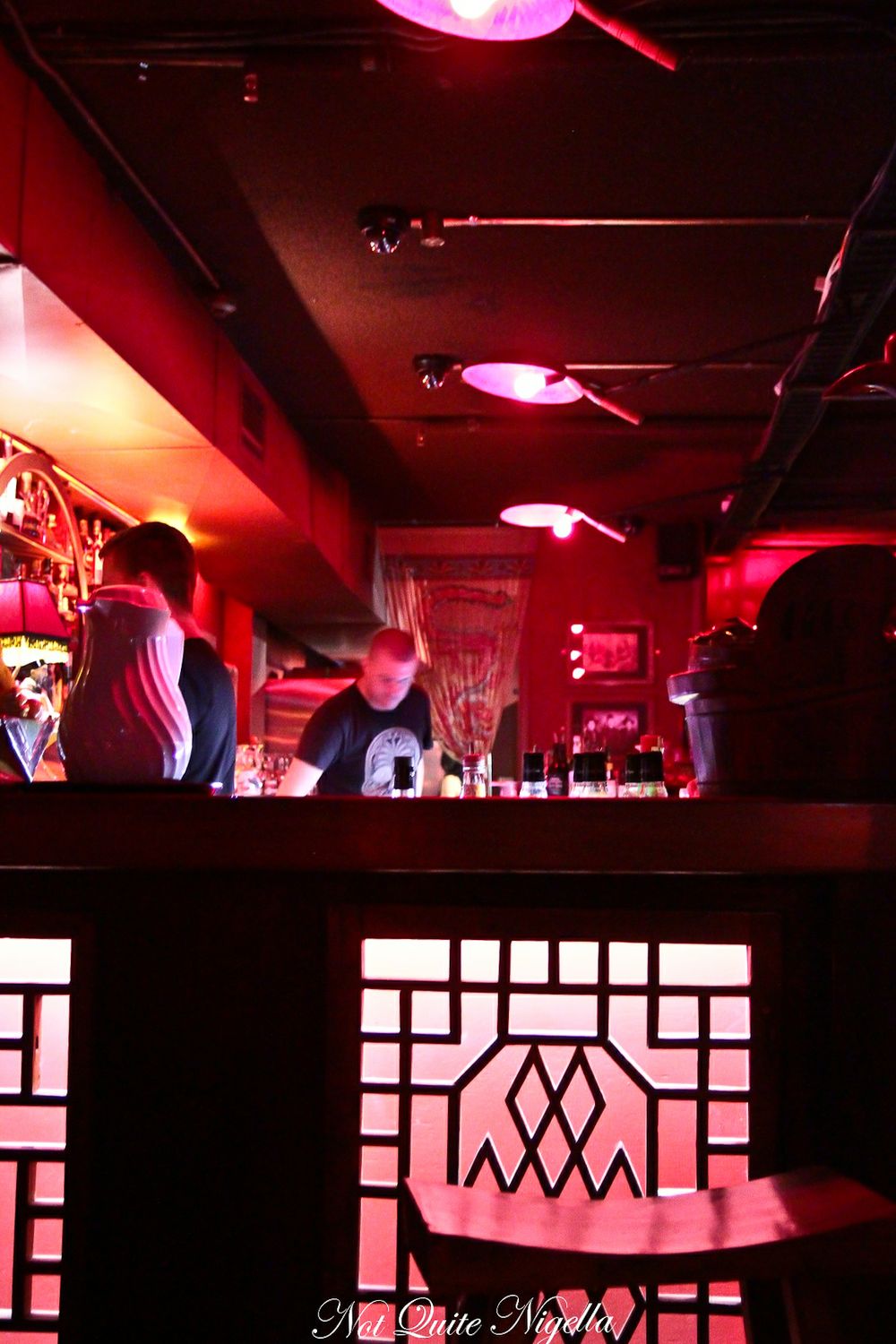 Dumplings are broken up into two choices. There is "From the North" of which there are two types of those thicker, studier dumplings and then there's "From the South" which are like Cantonese Yum Cha dumplings. Past the archway are clouds of steam where dumplings are busy being steamed. I place an order at the bar and we get a glowing cylinder with a number on it to take back to the table. 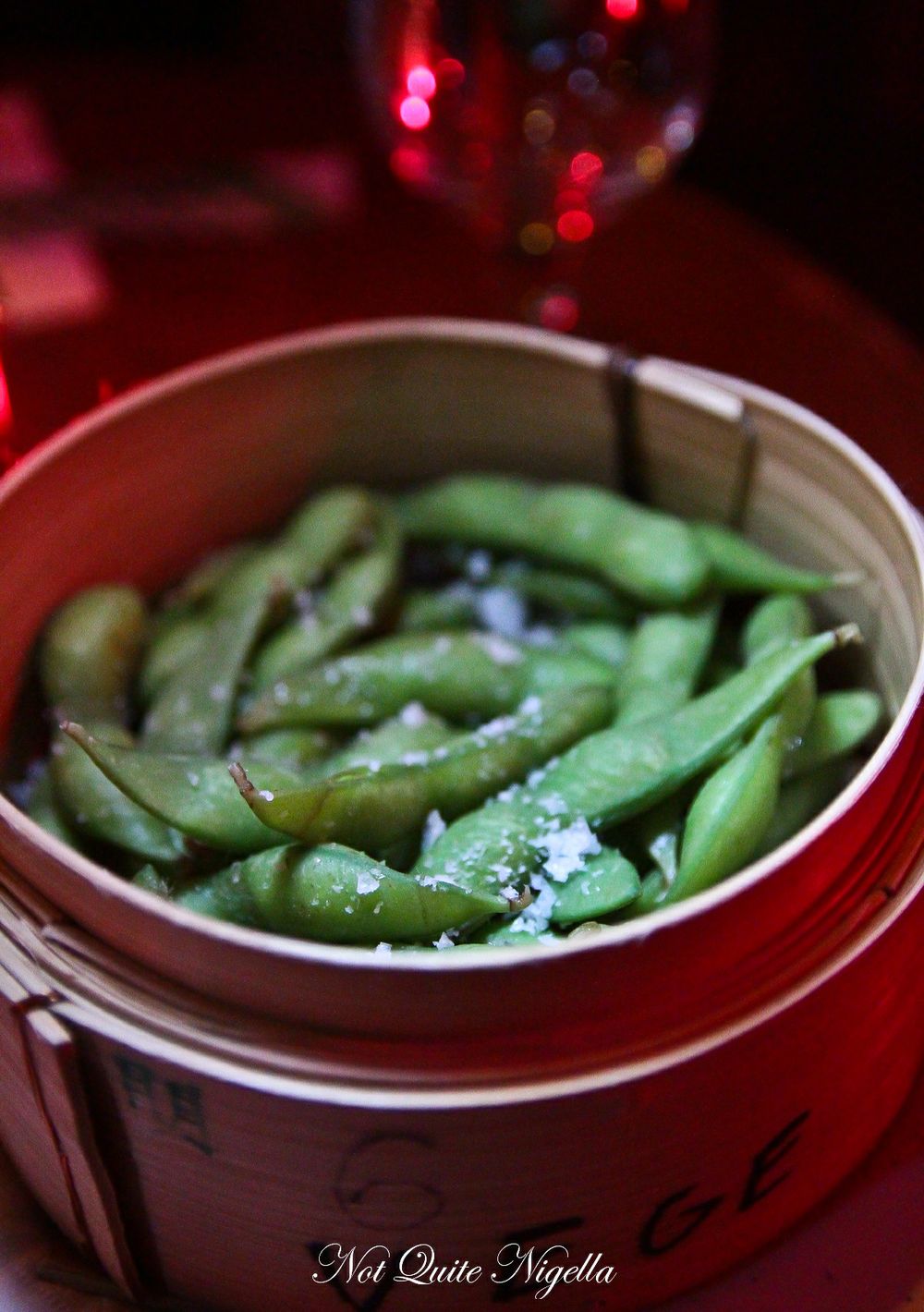 Two towers of dumpling steamers arrive and are deposited on the table. If you want to know what is what, the fillings are inked on the side of the steamers. I must admit I don't usually go for edamame but these are quite good with a generous sprinkling of salt on them and I felt myself popping pod after pod. 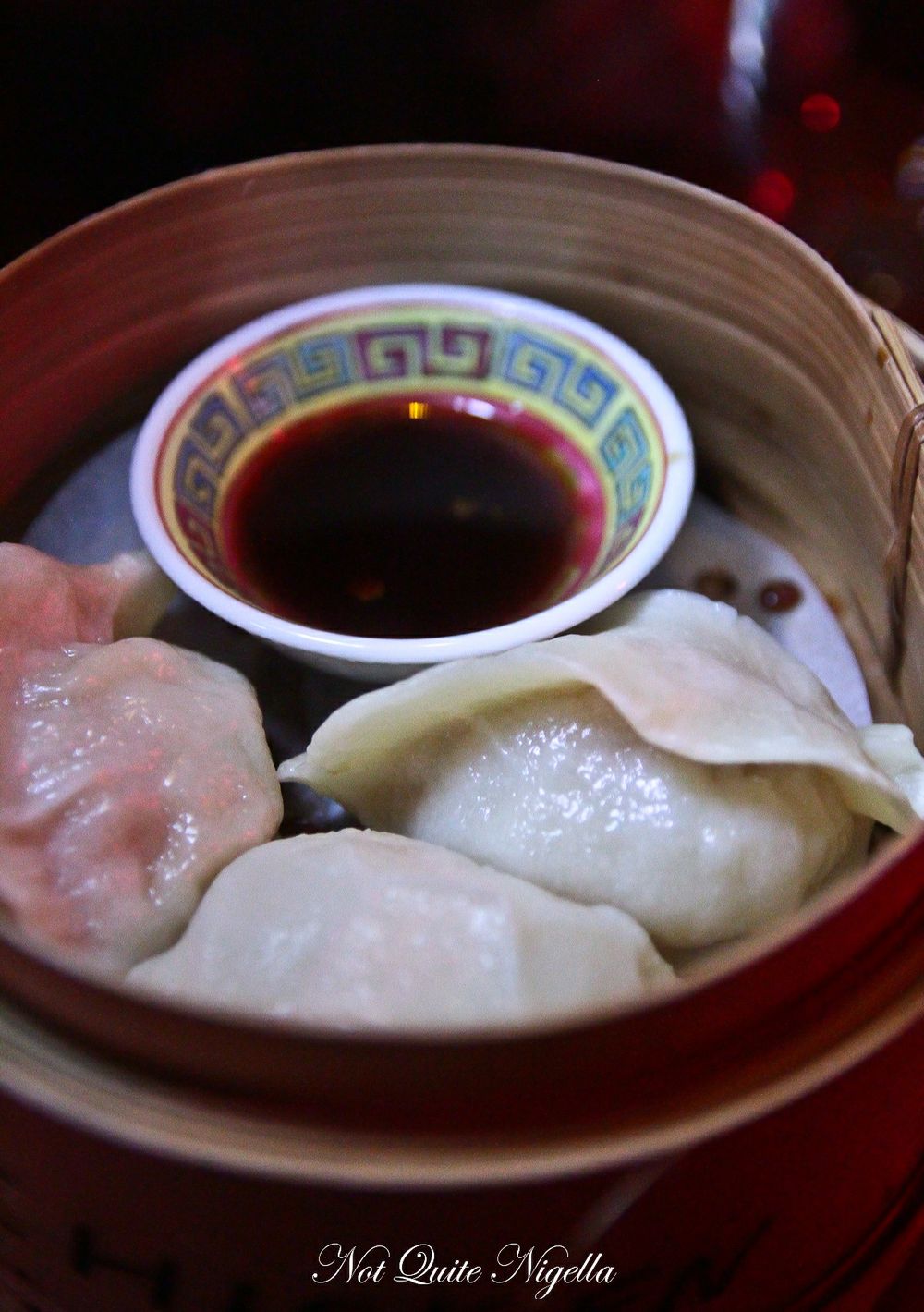 Chicken and coriander dumplings $7.50 for three

We ask about who makes the dumplings They tell us that the dumplings are made for them by an external company. These dumplings are firm and plump and filled with chicken and coriander. If you venture a little further afield to say Ashfield, these types of dumplings tend to come sixteen to a serve for about $9 which is why Mr NQN loves them so much so I'm glad I didn't bring him here ;) 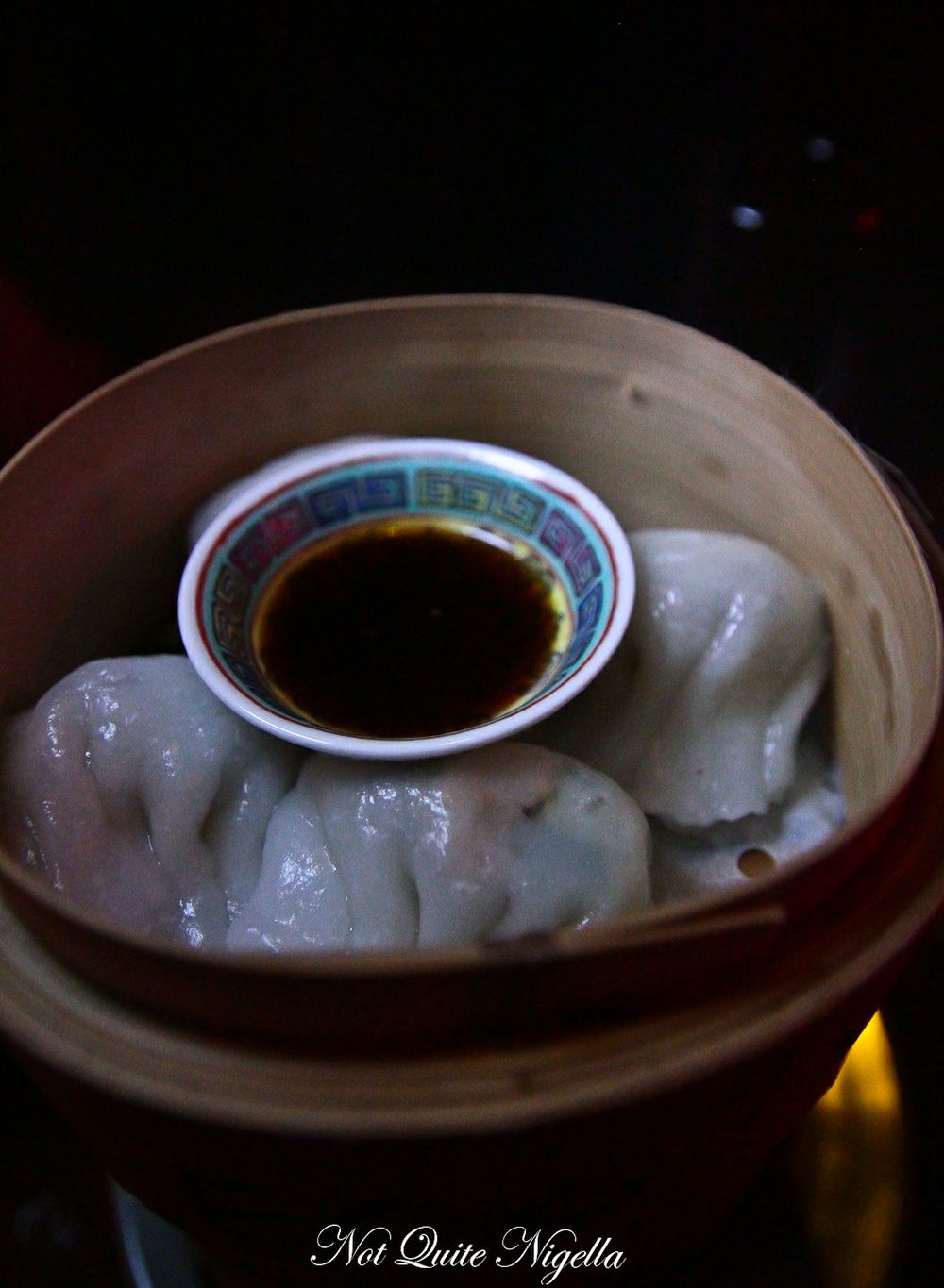 We both liked the vegetable gow gees with a strong taste of shiitake mushroom inside and they were plump with a lot of filling. 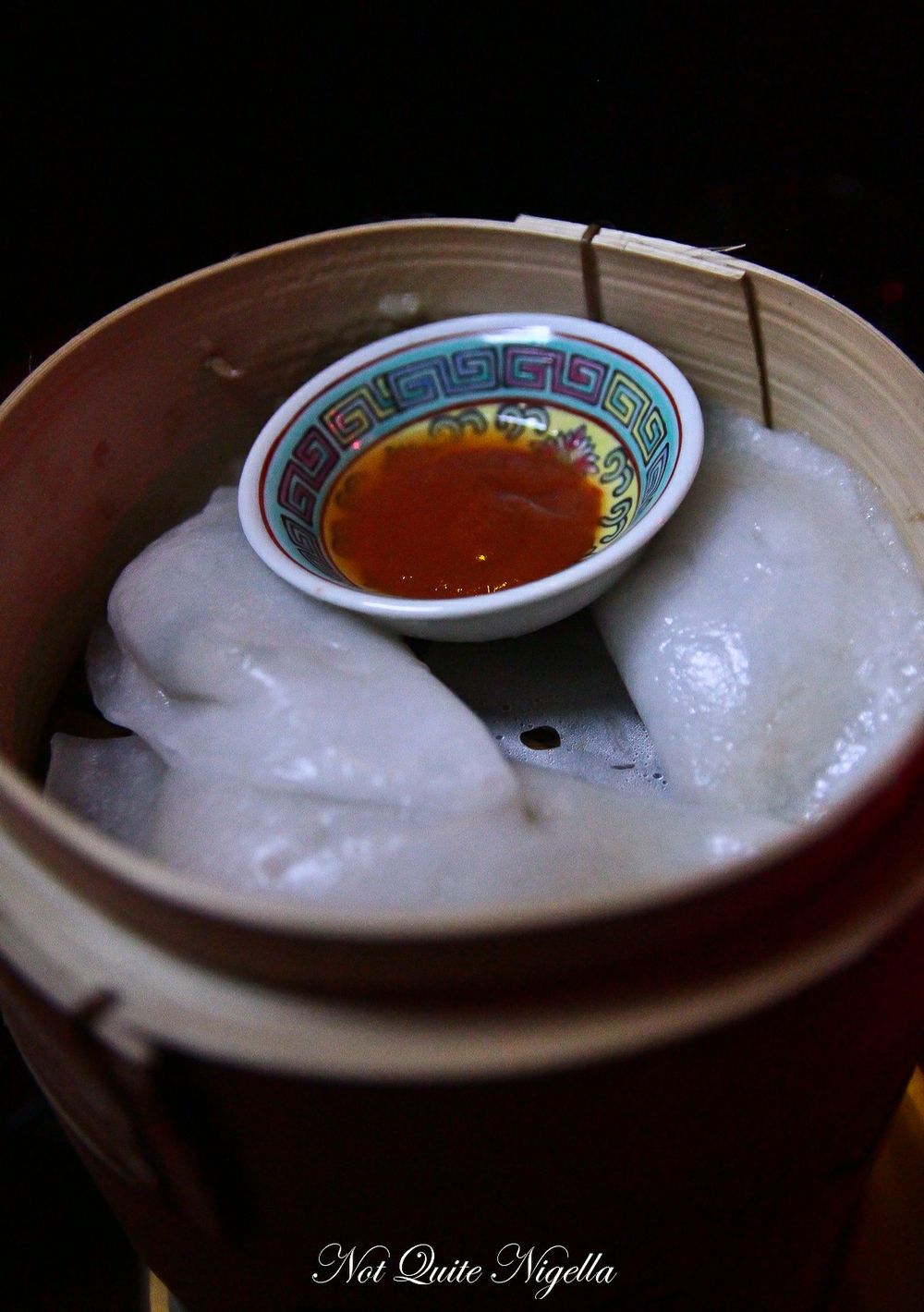 The crystal prawn dumplings are not har gows, they are half moons that aren't particularly filled up. The prawns are small and the filling fairly flat. 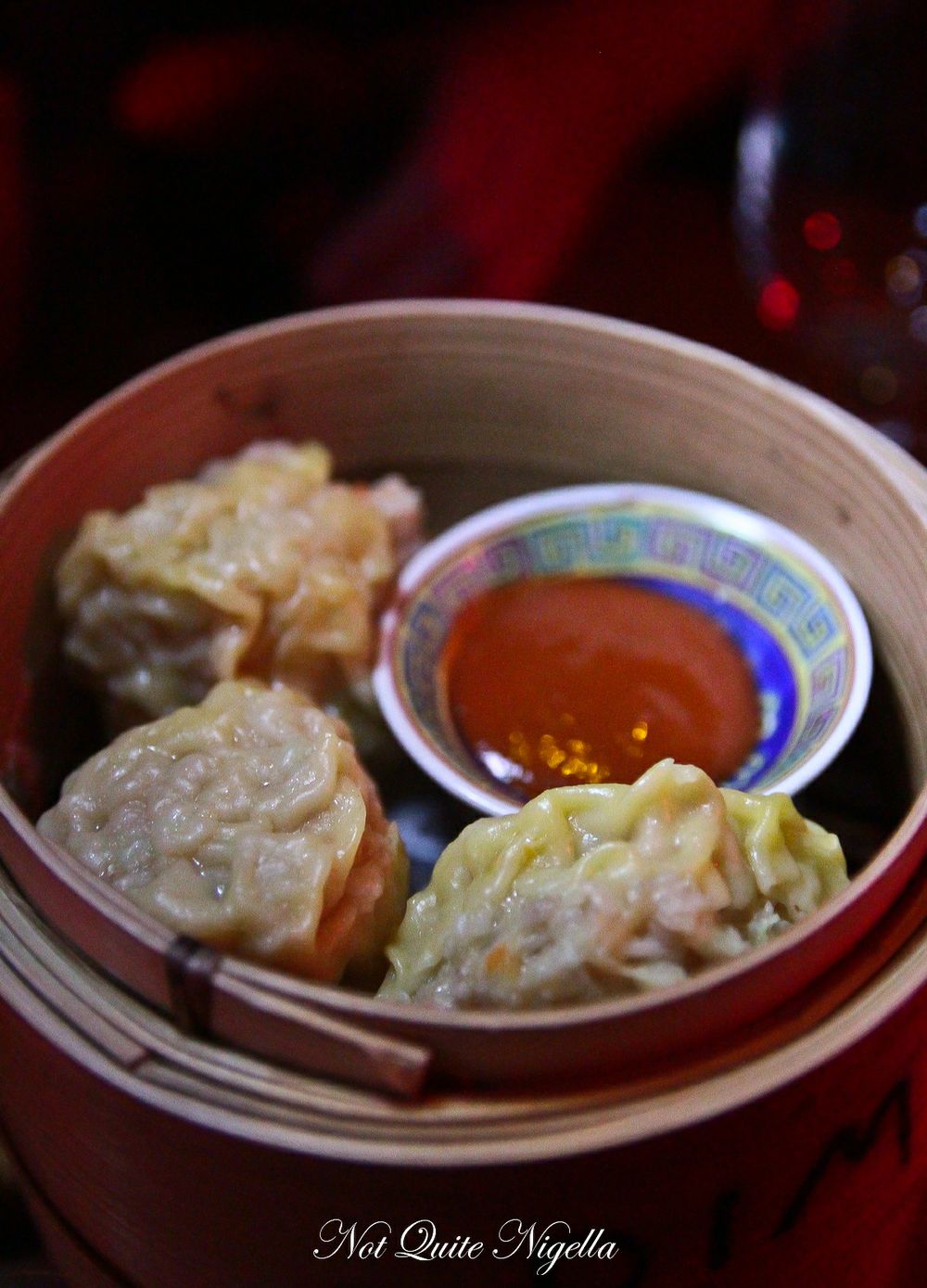 These dim sum are large but don't quite have the finesse of other dim sum and whilst there's plenty of filling, there isn't a lot of flavour to these so we dunk them in the spicy chilli sauce. 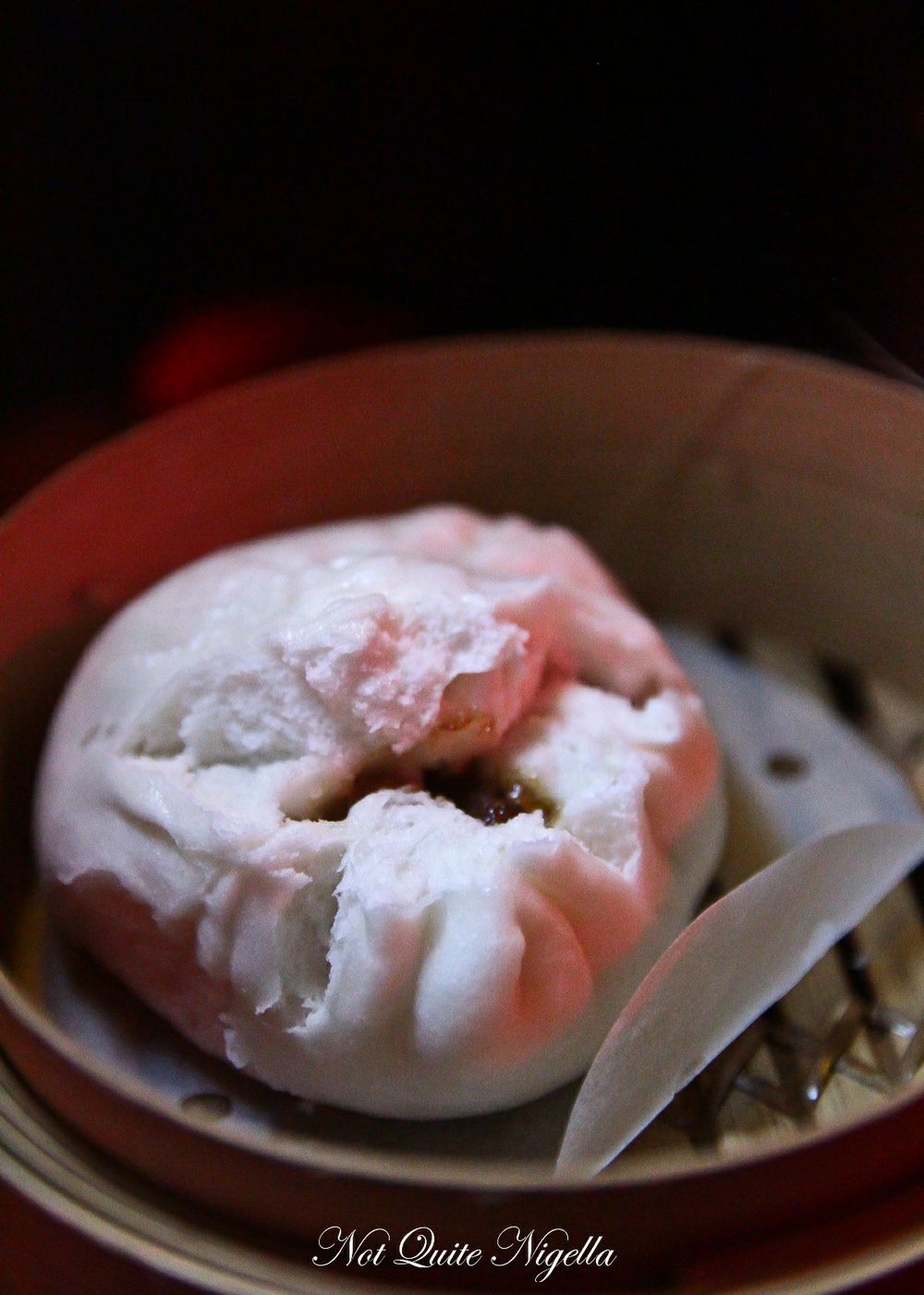 The filling in these steamed buns is BBQ duck instead of pork and that makes a nice change. The filling is richly flavoured and saucey and the buns are soft on the outside. Freaky Flier notes that the whites of the buns are not soggy or wet as they can sometimes be. 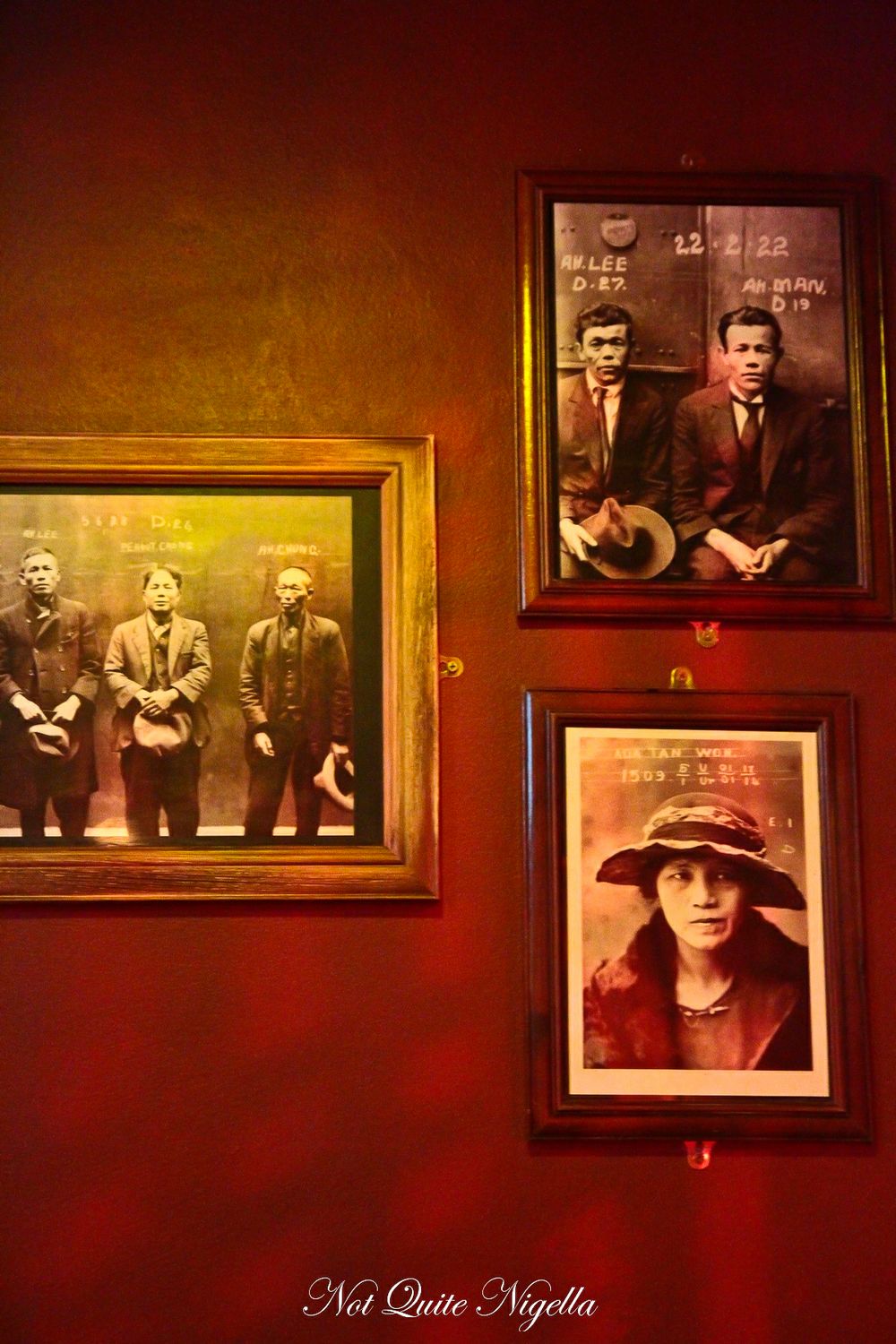 We watch as crowds ebb and flow. Those standing quickly claim tables once cleared and Freaky Flier and I need a bit less noise with which to converse although a part of us feels comfortable and enamoured by our surroundings. Bruce Lee vs Chuck Norris anyone?

So tell me Dear Reader, do you usually eat at bars or do you go elsewhere to have something to eat? And are you a beer, cider or cocktail drinker? 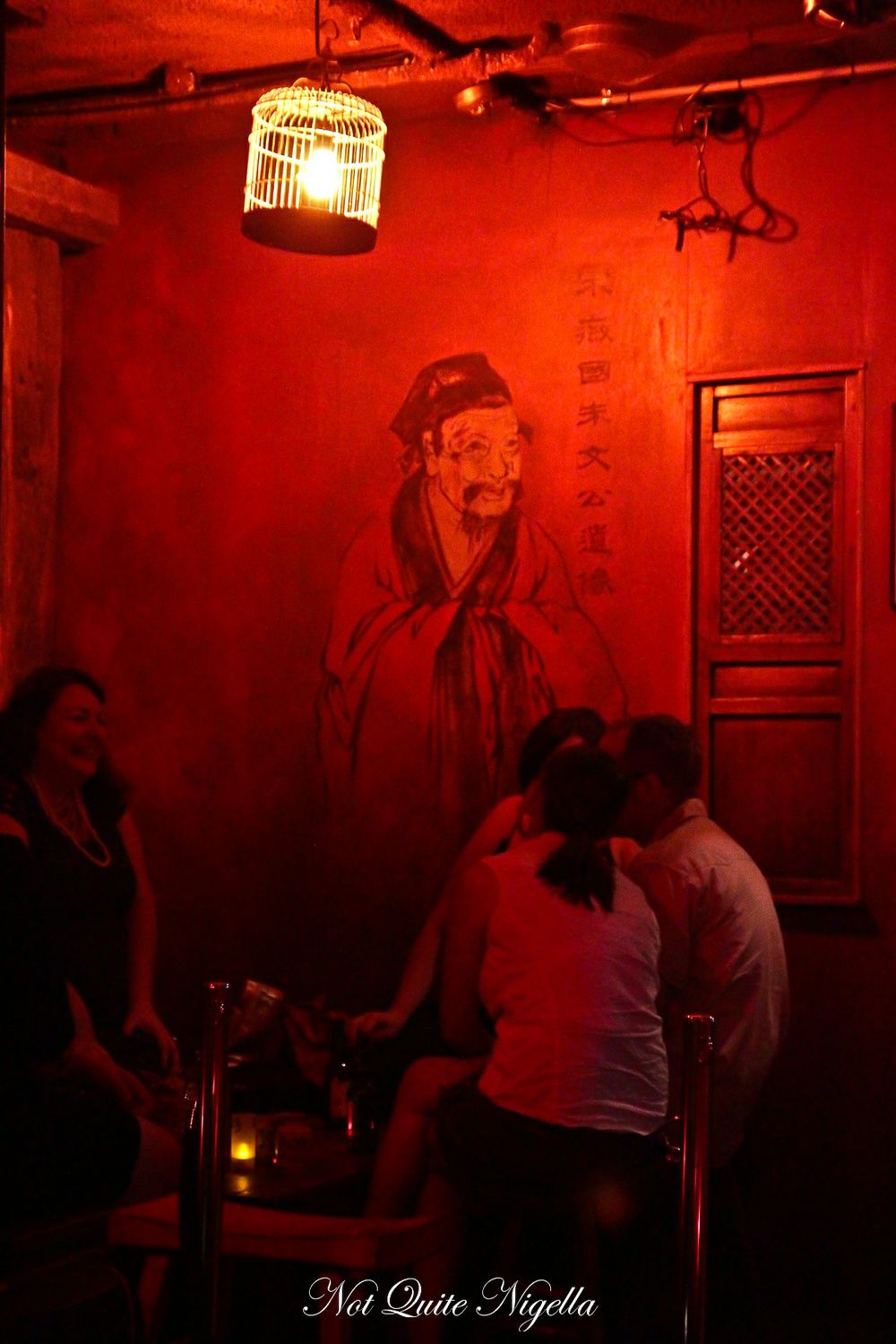 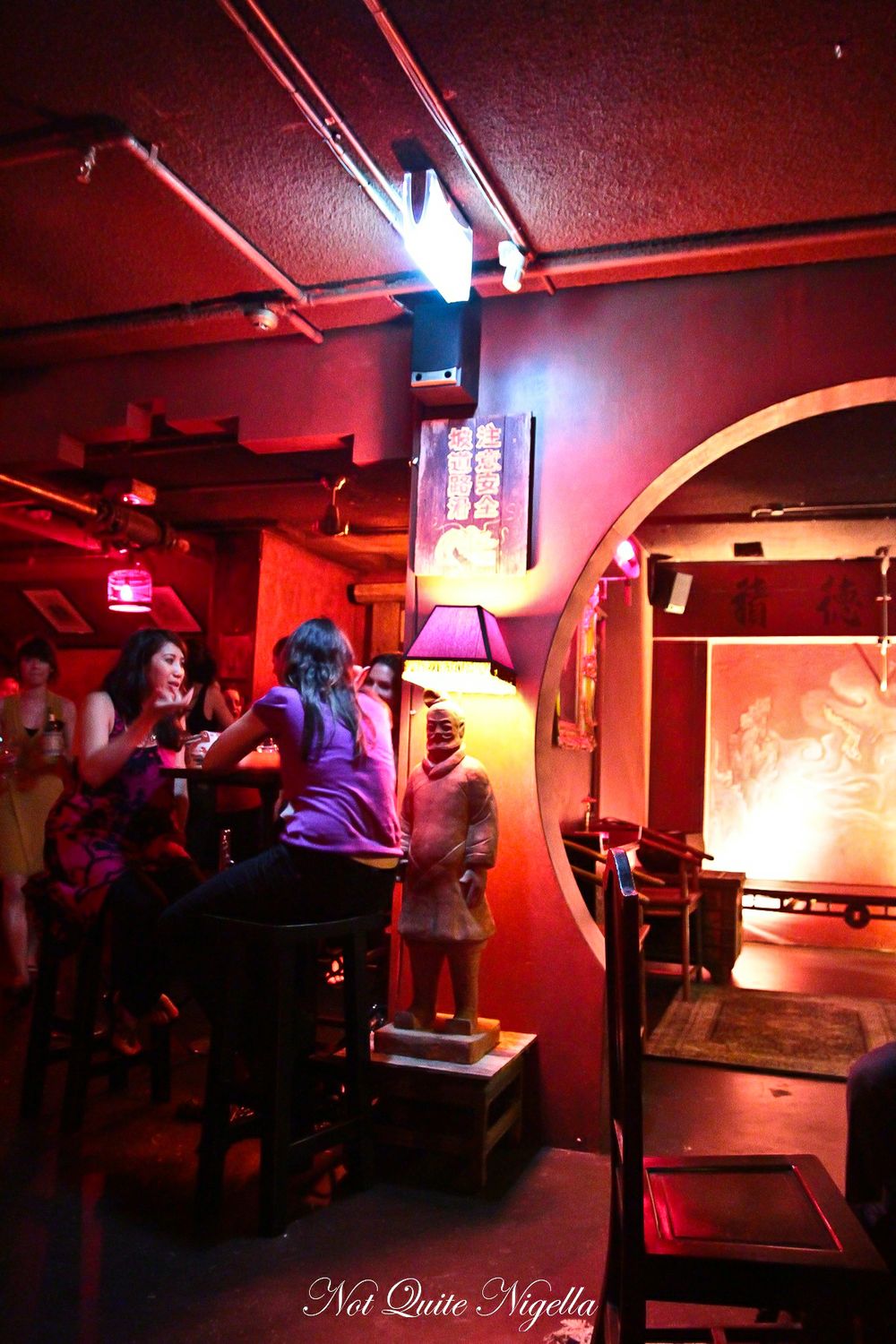