Update: As the owner Josh has publicly stated "Lorraine aka Not Quite Nigella is a bitch" and insulted my blog, I can't say that I would recommend my experience here in any way.

**"He's a grumpy guy but he sure can cook" says an affable fellow diner at Cafe Ish, moments after Cafe Ish's chef Josh tears up the small cafe, looking bad tempered and slightly wild, and points at my husband and says "NO cameras, you'll have to put that away!" and storms back to his tiny kitchen. We're all speechless and a bit taken aback. His partner Ai tries to explain, you see she's also unhappy that her coffees were compared to others online and asks whether we can show some credentials. Fellow blogger Christie from Fig & Cherry and I show her our business cards and after that it is ok to take photos. And despite being allowed to take photos, Dillon and Christie report that the whole time, chef Josh has been eyeballing us intently making it for a less than comfortable_ lunch.
_ 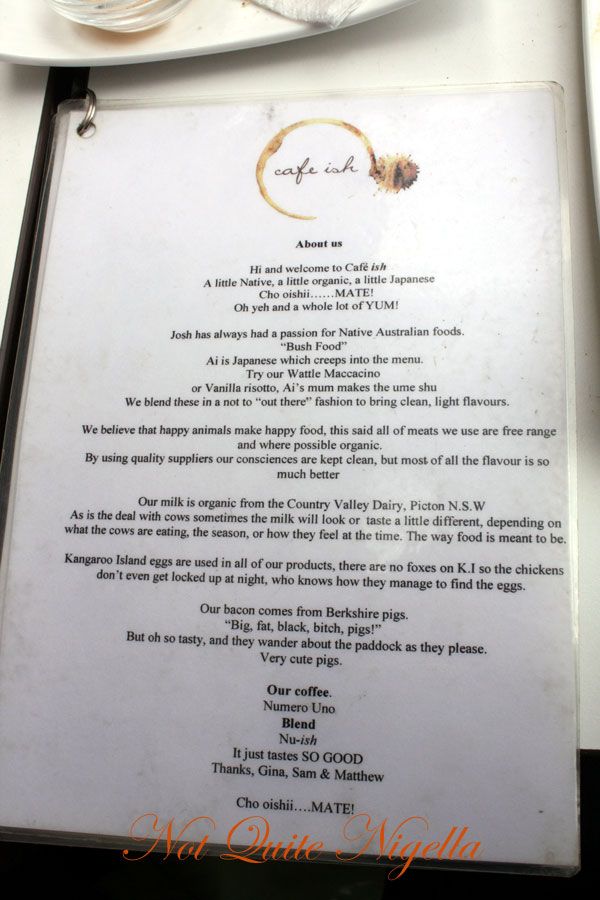 We're still a bit shocked at the manner in which we were told but we are determined to enjoy our lunch nevertheless. My husband and I are lunching with Christie and her husband Dillon today, after weather changed our Palm Beach plans. Cafe Ish is said to be Organic Modern Australian food with a Japanese twist. The service it has to be said otherwise is absolutely charming from every other member of the staff. We've heard so much about the soft shell crab omelette and despite the fact that it's not on the menu the waitress assures us that I can indeed have it. There is an emphasis on Organic produce with the Free Range eggs coming from Kangaroo Island where there are no foxes so the chickens are left to roam free, the pork from Berkshire (soon to be all organic) and milk from Country Valley Dairy in Picton. Everything is categorised into "ishes" from "Sweetish" to "Savourish" to "Egg_ish".

Our coffees arrive first, very artistically presented we must say (and both Christie and I love the cup and saucer set). It's their signature coffee the Wattle Maccacino with wattleseed and macadamia. It's an unusual but nice cup of coffee with some of the taste probably coming from the milk from the Country Valley Dairy in Picton where the taste of the milk changes depending on the season and what the cow eats. 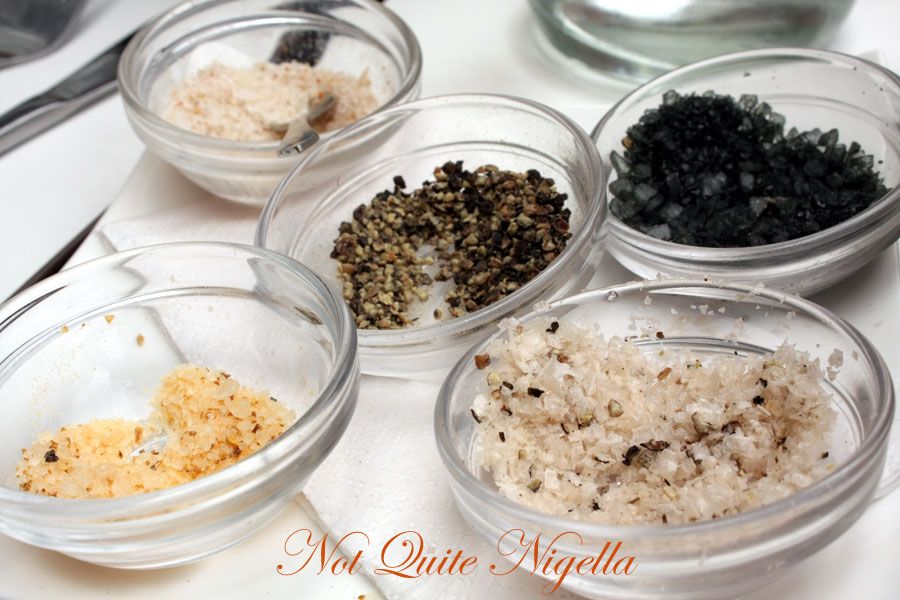 We're given a selection of salts from the black Hawaiian Volcanic Salt; a Salt and Pepper combination; Citrus salt and chili salt as well as a grinder of Tasmanian Alpine Pepper Berry. 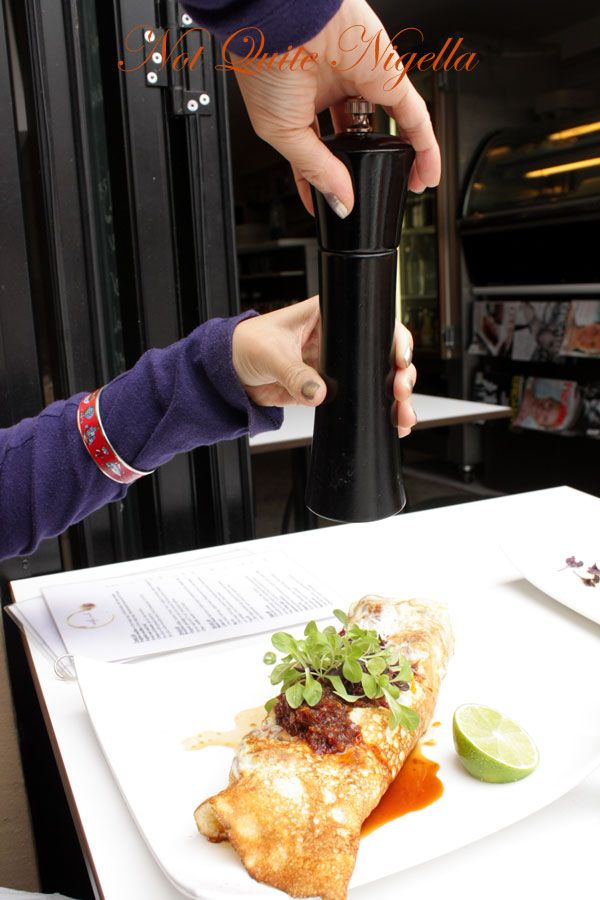 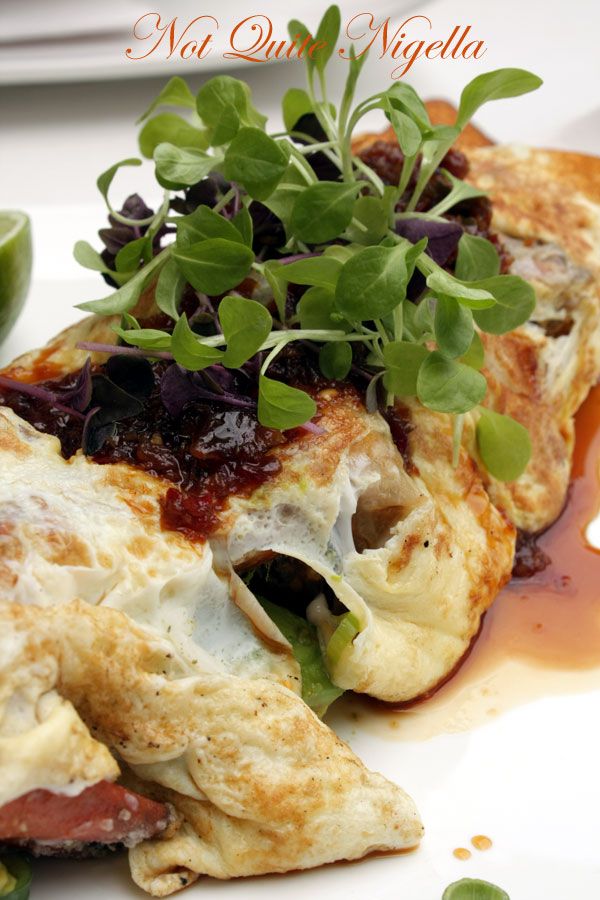 I try my soft shell crab omelette. It's a light lacy omelette filled with delicious soft shell crab. I can see why it gets the raves that it goes, the soft shell crab and avocado salsa going so well with the omelette with the piquant relish on top and the pool of soy and ginger sauce. I season it with some Tasmanian Alpine pepperberry which gives it an interesting taste and a pretty sprinkling of purple. 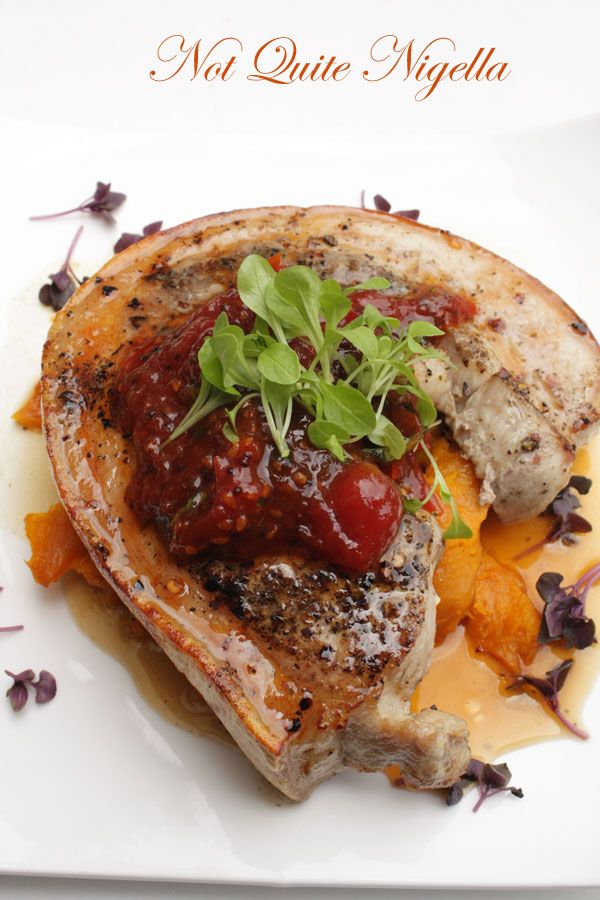 Christie's dish is a huge piece of pork loin which makes us gasp as it's brought to the table it looks so good. It's an incredibly juicy piece of pork loin sitting on a bed of perfectly seasoned soft roasted pumpkin. Did I mention how juicy it was? Ok yes, absolutely worth the abuse :P 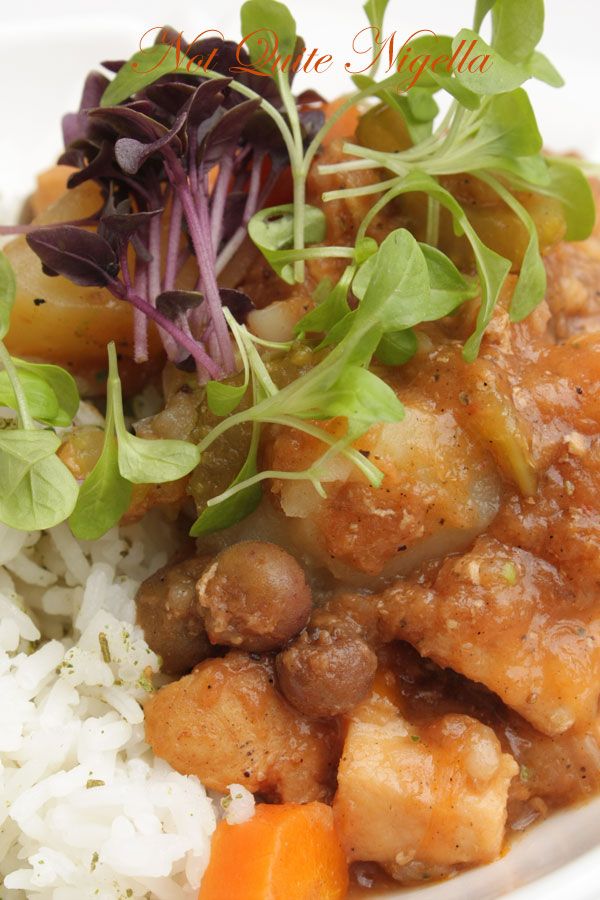 Dillon's curry is certainly interesting with chunks of crocodile in it. Crocodile is like a cross between pork and a very firm fish with a slightly dry texture to it. The muntahries, a native berry, are delicious and the lemon myrtle rice is a lovely and unusual accompaniment. It's said to be a Japanese curry but different to the curries I've had there (the Vermont and S&B tasting ones). 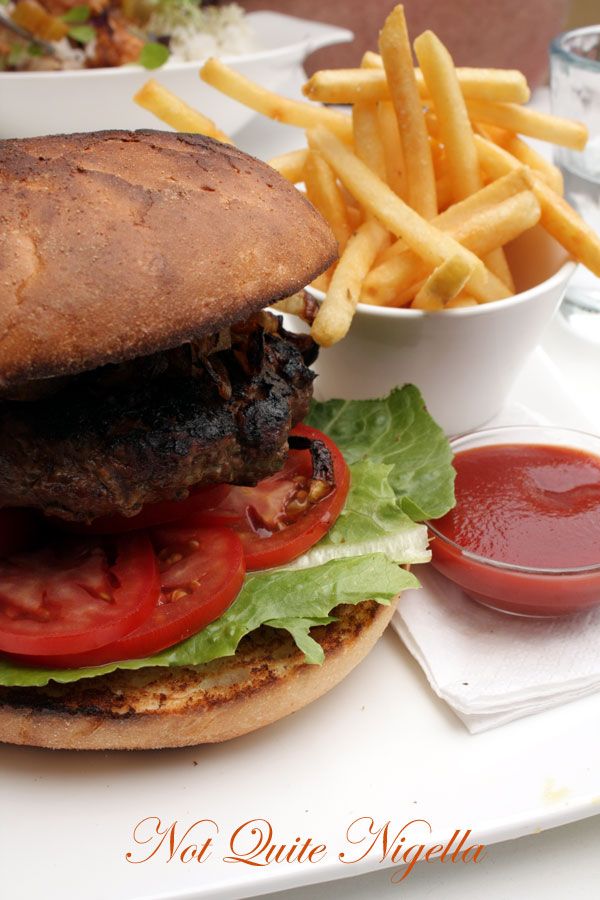 The Wagyu burger on a slightly burnt damper roll with tomato, cos lettuce, tomato relish and ketchup is large and filling and whilst it's not bad, I prefer the adventurousness and finesse of the other dishes.

After we've eaten Josh comes out and takes our plates and introduces himself and we shake hands. He says with a wry smile "One day I'll learn to ask people not to take photos in a nicer way". "You didn't have to chuck a spaz" says the honest Christie which makes us all laugh. He's not so grumpy anymore it seems. ETA: Although despite his apology his comment below (see comments section) says that he feels he wasn't shouting at all, merely being assertive. Hmmm, I didn't think people needed to apologise for being assertive ho hum... 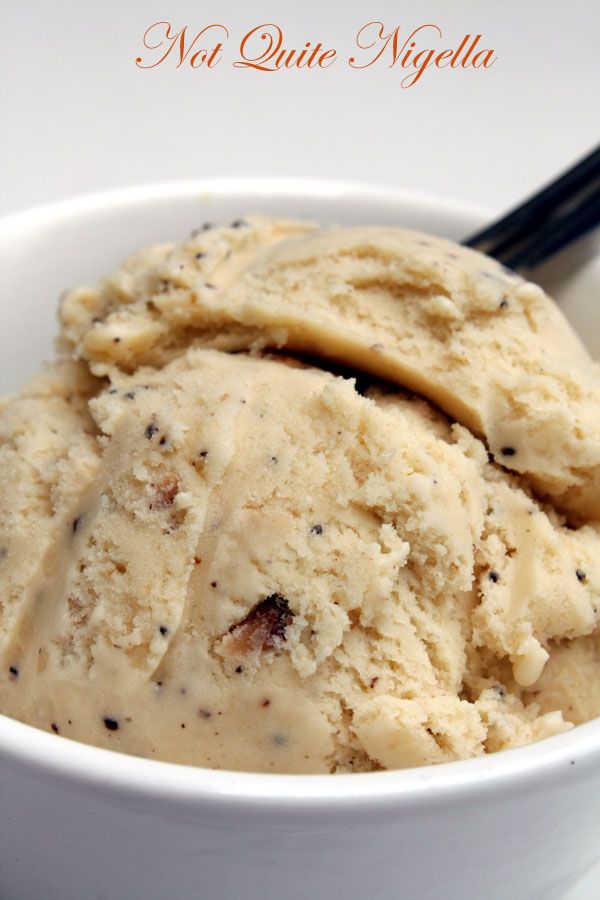 We have a chat with him and have a look at the tiny kitchen. Everything is made on the premises, even in this tiny kitchen, one which he points out is without any gas, only electricity and two burners (however they will be taking the premises over next door). All of the desserts are home made with only the bread and ice cream being bought in and the ice cream is a special blend made for them of wattleseed and macadamia. So of course we are compelled to try that. It's a deliciously nutty blend with plenty of texture to it from the wattleseed.

I'd love to say that I'd be back but to be honest, I didn't feel that the subsequent exchange of comments would mean that I would be welcome. Also I prefer to enjoy myself when dining out and being with friends and being yelled out doesn't cut it, especially when an apology is given but then taken away. 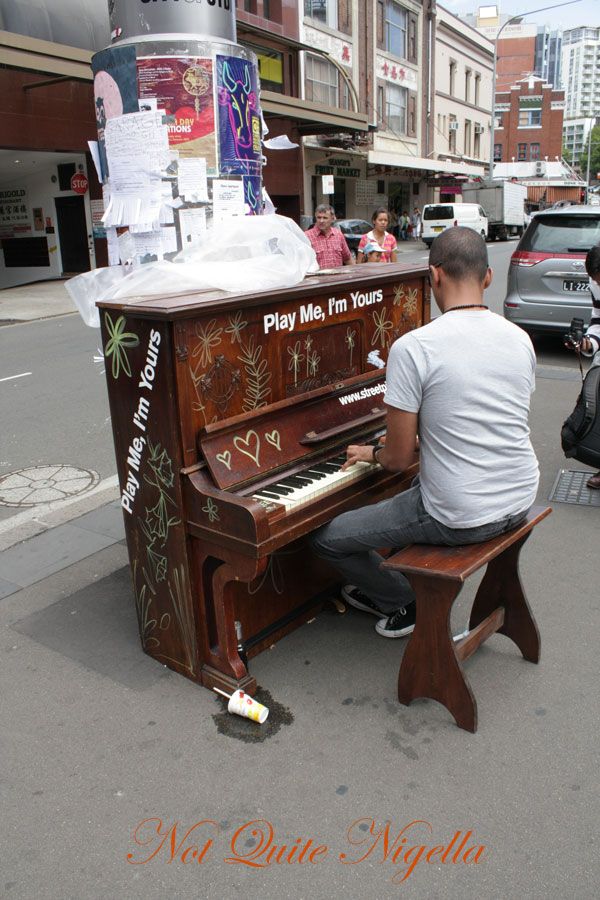 We walk through the city to Chinatown where we spy one of the free pianos which the public are urged to play as part of the Sydney Festival. I decline, there are too many years between my last playing of Für Elise and now.

Check out Christie's review of Cafe Ish on her blog Fig & Cherry!