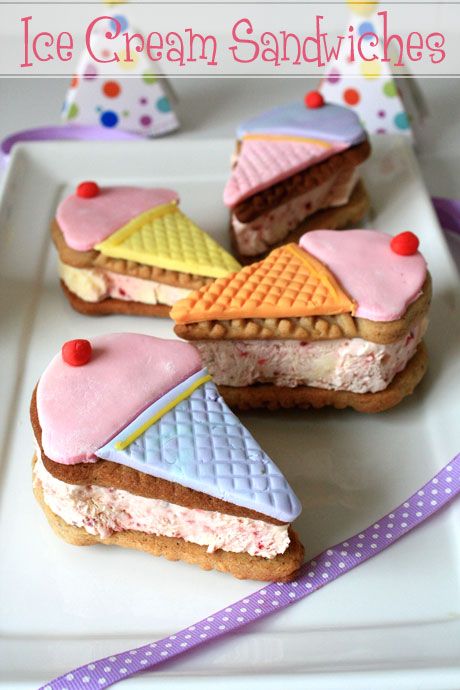 I had a brainwave during a heatwave. And of course it was a brain wave about food. "What about if I made some ice cream sandwiches shaped like ice cream?" I asked Mr NQN. He's used to strange questions but the idea of having ice cream during this hot day appealed to him and he said  "Sure" straight away. I then had a brainwave a few minutes later or as Mr NQN called it, a brainfart. I told him how I wanted to have my own Cable TV show. Just me and a friend, two chairs, a white sheet as a backdrop and a phone for people to call in. He was amused by this idea and reminded me of why he calls me Kramer (harebrained ideas, clumsiness and we tend to enter a room in the same way). I told my friends Nic and Kathy and both were enthusiastic and Kathy said that she'd Skype in from the US. 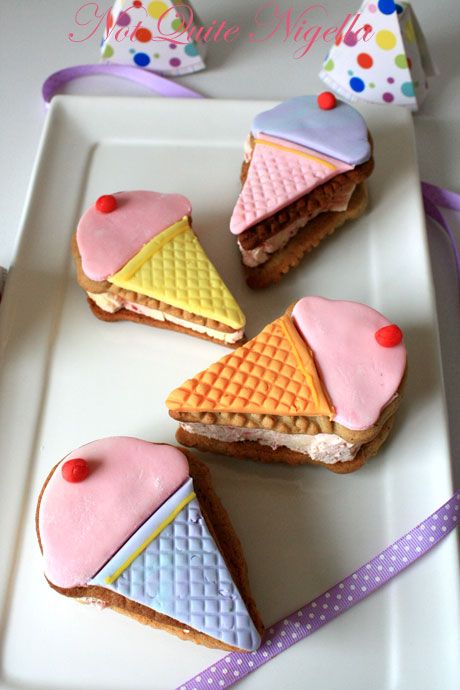 Back to the less embarrassing idea. The Ice Cream Cookie sandwich. I picked up a canister of 100 cutters from Aldi for the princely sum of $4.95 a few weeks ago. Apparently at $9.95 I thought that was too expensive but at $4.95 it was a bargain. This is also the logic that allows me to buy designer shoes that I wear only once mind you although I never claimed that said logic was flawless and that's probably why no-one has ever sought a patent on my logic. In this canister was an ice cream cookie cutter with indents. I adore cookie cutters with indents. They allow people like me without imagination or drawing ability to be able to decorate the cookies with the indented guides. 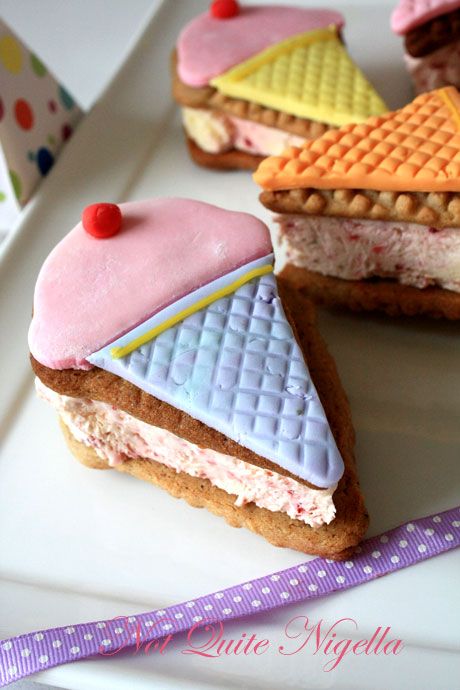 For the cookie itself, I used my fail proof easy cut out cookie recipe. This dough is easy to use and can be rolled and re rolled until every last scrap is used. It also smells incredibly good coming out of the oven. I made another batch of strawberry mascarpone ice cream and apart from colouring some fondant the whole lot was done within a few hours. I fed these to some rather happy children (and I did know them, I don't approach random children with ice cream treats) and they were very appreciative of them. So were the adults I might add. Perhaps I'll try pitching them my cable tv idea next... 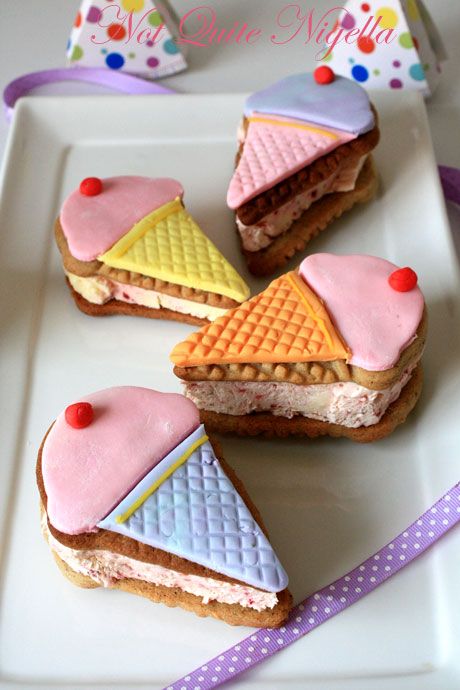 So tell me Dear Reader, if you had a TV show, what would it be about? A comedy? A drama? 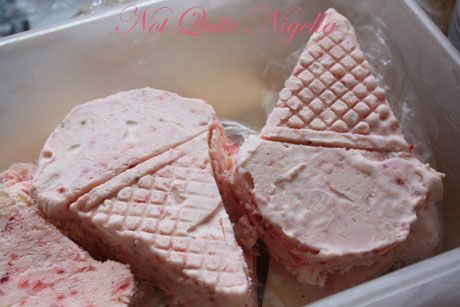 Step 1 - Have a large metal tray prepared with cling wrap or foil at the bottom. Slice ice cream into 2cms slices and then cut out imprint with ice cream shaped cutter. Cover with cling wrap and freeze until very hard. I find it easiest to use homemade ice cream such as this Strawberry Mascarpone as commercial and less expensive ice creams melt very fast as they have a lot of air incorporated into them. 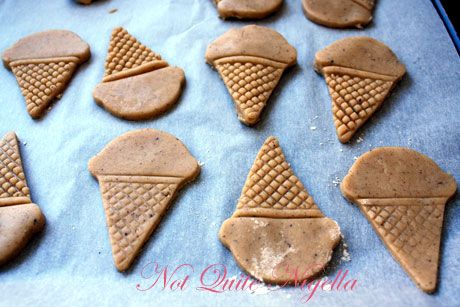 Step 2 - In a large bowl, cream together butter and sugar until smooth. Beat in egg and vanilla. Stir in the flour and cinnamon. Cover, and chill dough for at least one hour (or overnight). 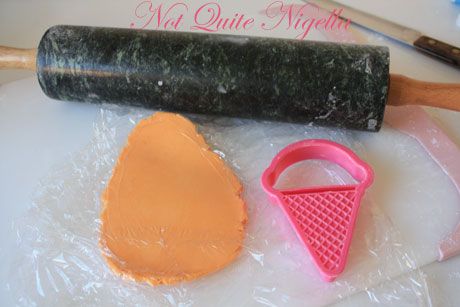 Step 4 - Spread half of the cookies with strawberry jam. Roll out coloured fondant between two sheets of cling wrap and cut out ice cream shapes in fondant and slice in half so that the cone and ice cream are separated and place different colours on each cookie on top of jam as shown. Roll small balls of red fondant and place in centre as a "cherry" and pipe a line across cone. 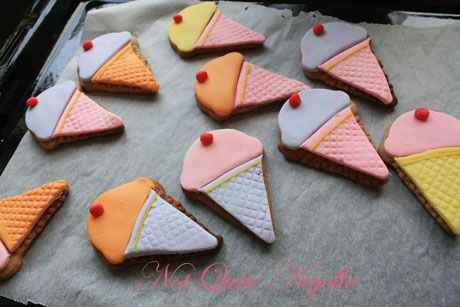 Step 5 - Cut pieces of parchment or wax paper to wrap the ice cream sandwiches in freezer. Place plain biscuit halves on a tray. Take prepared ice cream slices out of freezer and then place on plain biscuit halves. Place iced biscuit on top and wrap in parchment and freeze until you want to eat it (which may be straight away!). Not just for kids, trust me on that. 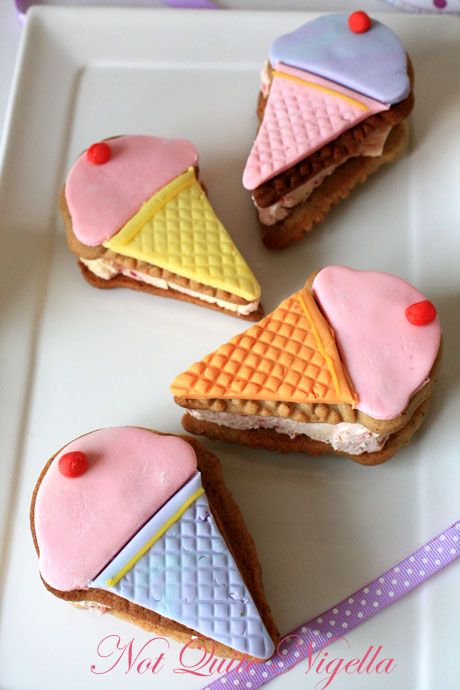