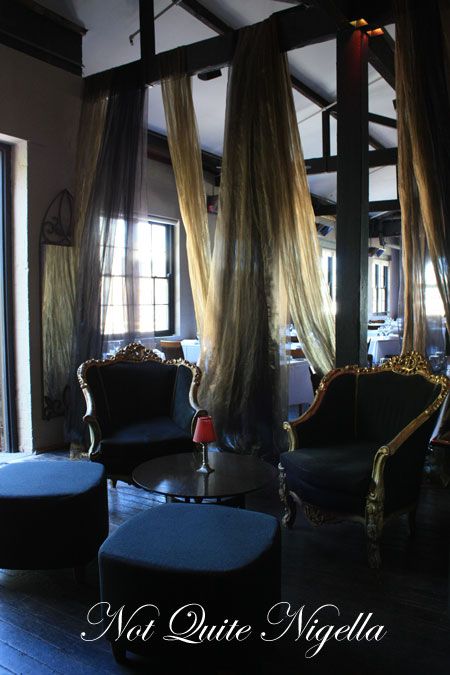 Memory is a funny thing. There was a restaurant that I visited about a decade ago called Bel Mondo. It was owned by Stefano Manfredi, one of the biggest chefs in Sydney and we had a wonderful meal there. It was hidden in a little lane way up a flight of steps out of the way in The Rocks area, a stairway that you may not know was there as there isn't much else up there. The foot traffic that passes is often tourists wandering around our fair city. And as a result of this hidden away location, when Manfredi left and the business was sold, people didn't know that it was still there. 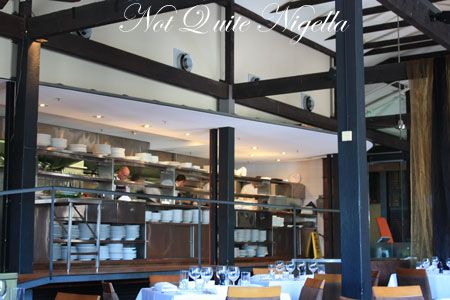 Bel Mondo's chef Andy Ball is from London, ex Claridges and The Ritz and has been cooking here for about two years. His menu is different from Manfredi's Italian cuisine, it is more Modern Australian. Today they have opened up Bel Mondo just for Ed and I which feels all rather Hollywood! We are trying the degustation menu which for the modest price of $77 you get five courses of food which has got to be one of the best value degustations going on in Sydney at the moment (and the price is valid even on Friday and Saturday nights). 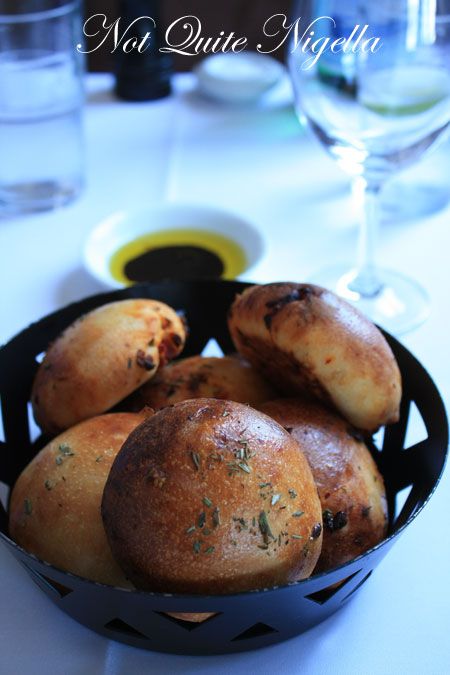 We start with the bread rolls which are filled with swirls of sun dried tomato pesto and coated in herbs. They're delicious and warm which is just how I like the bread to be. 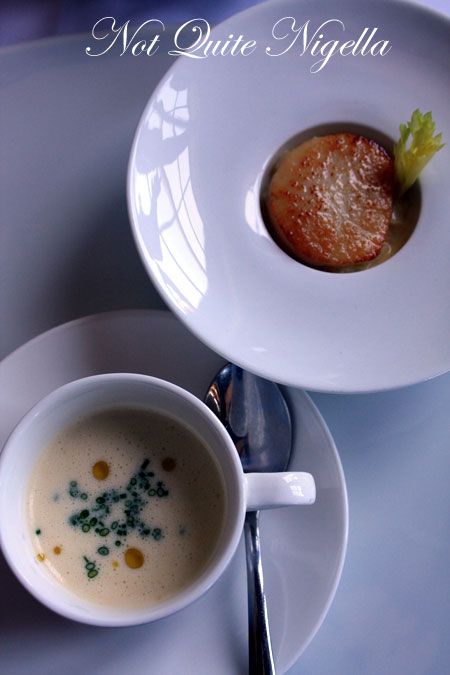 The cold potato and leek soup comes in a small teacup and is accompanied by a sauteed scallop. The scallop is seared on one side only. I like my scallops fat but Ed says that fat scallops are impossible to get locally here and he also feels that the leeks under the scallop didn't work in this and I'm inclined to agree on the leek front. 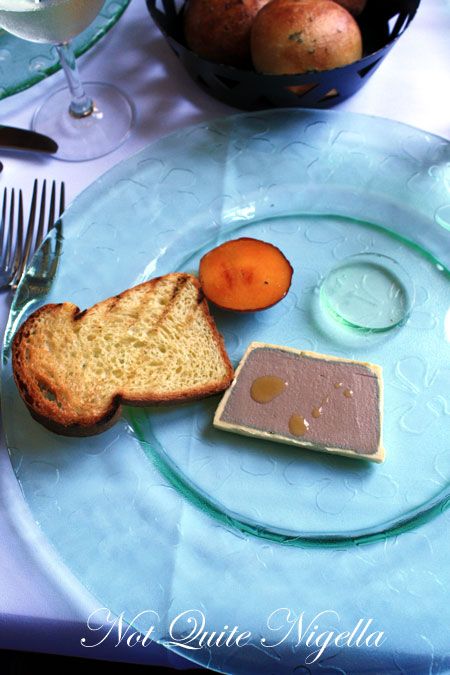 The chicken liver parfait is deliciously soft and spreads easily on the lightly toasted brioche slice. The peach wine jelly has a soft, jiggly texture (think bootylicious) and there is also a caramelised peach which has a think toffee glaze on top. We both find the dish a bit impractical and I inhale some of the brioche crumbs and a minor inelegant choking fit ensues. 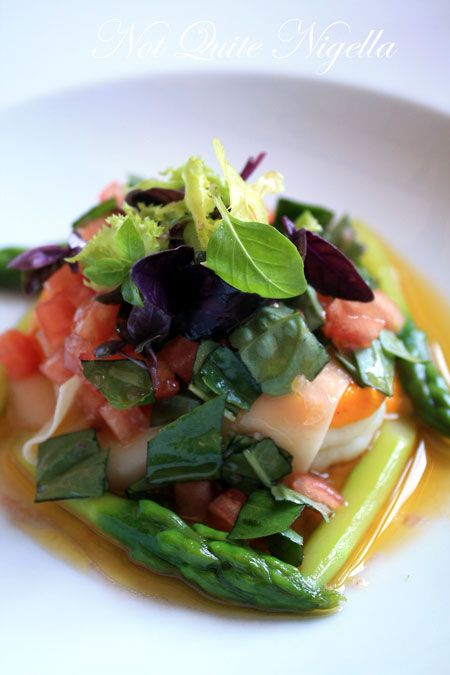 I've often heard of vanilla scented sauces and the consensus is that they taste off puttingly dessert-like so I was interested to see how this would turn out. The open ravioli has a nicely cooked prawn and a silky texture and the carrot sauce is flecked generously with vanilla beans but is just at the right level of vanilla so that you know that it's there but it doesn't feel wrong like you are eating a savoury dessert. The taste of Thai purple basil is strong to help bring home the savoury flavour. 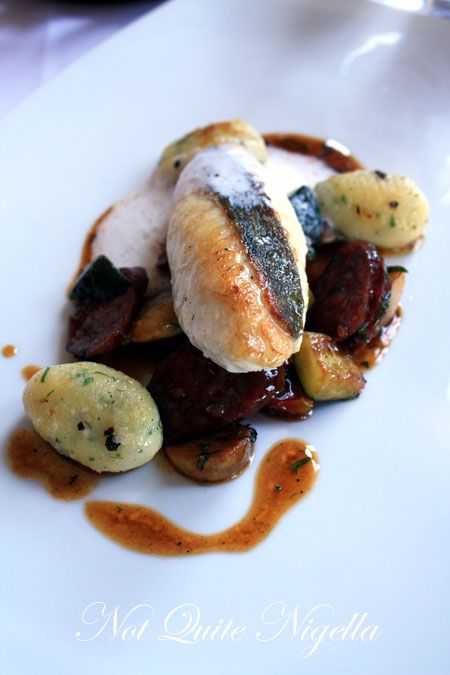 This was a surprise dish as we thought that the lamb was replaced with the John Dory but this is an additional dish as Andy thought that the John Dory today was particularly good. It's moist and comes with sliced sausages, marinated mushrooms, zucchini and sun dried tomato with a richly flavoured sauce. Whilst the previous dish was all "whites and vanillas" this dish is dark and moody with strong flavours. 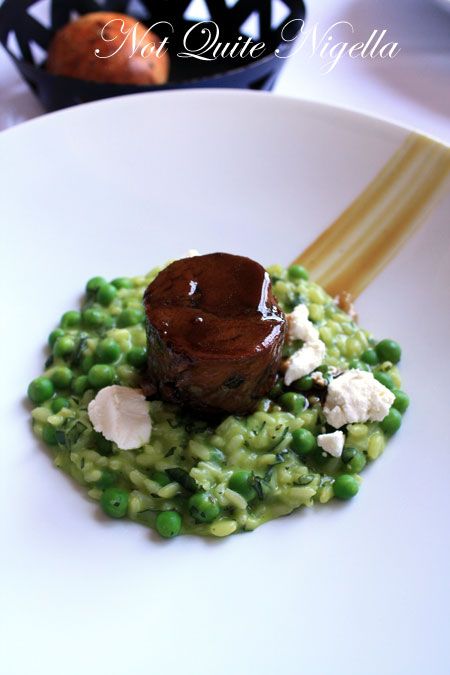 "Ed, don't mention the puree" I say to myself quietly. As I've brought him along I don't want him to say the dreaded "Skid Mark" words. He is an opinionated guy but thankfully he keeps quiet until afterwards. I had thought that the John Dory dish was the last one so I am mentally unprepared for a rich dish like this. It is beautifully cooked with the shoulder of lamb falling apart easily. I'm not a huge mint and pea fan so I leave most of the risotto but I particularly like the garlic and honey puree although I wish there was more as there is just the one streak. And yes I prefer to call it a streak to a skid mark. 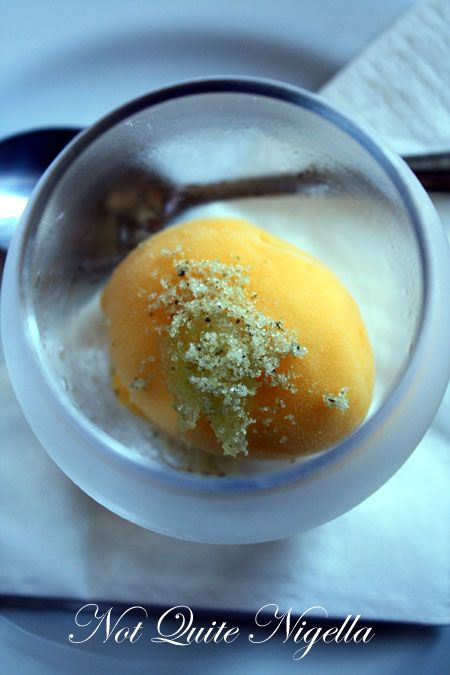 The mango sorbet cleanses our palette but the herbed sugar crystals aren't really necessary. I prefer the mango sorbet without them as I like the smooth texture and flavour of the sorbet. 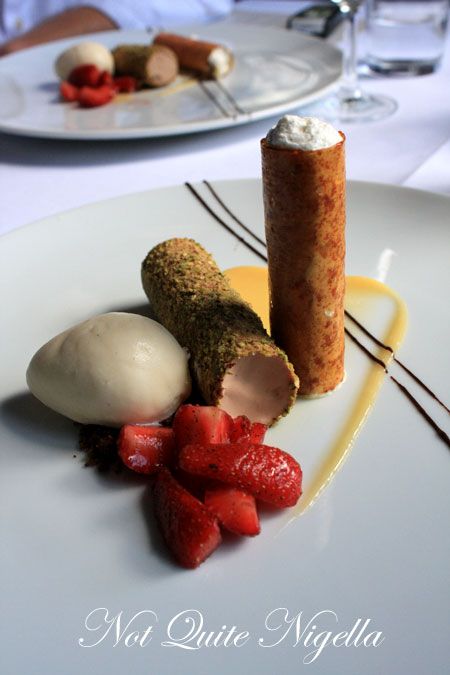 As often happens I made some stomach space for this four parter dessert. There is a milk chocolate parfait ice cream in a cylinder shape rolled in crushed pistachios with a lemon curd, macerated strawberries, a milky ice cream sitting atop a crunchy chocolate cookie and a caramel croquant biscuit which is a slender-as-silk cylinder of biscuit filled with a vanilla speckled cream. I'm not sure how to eat this as there are so many elements so I pair the strawberries with the milk ice cream and caramel croquant and the chocolate parfait with the lemon curd which works surprisingly well. Only the strawberries weren't quite sweet enough. 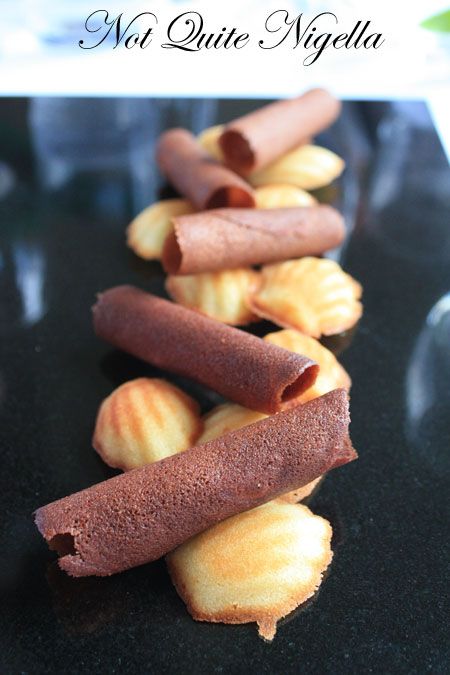 The chocolate tuiles are delicate but the honey madeleines have won my heart. They're fabulously tender and eggy just as they should be. Ed and I chat over coffee for him and tea for me (T2 Earl Grey).

So tell me Dear Reader, do you prefer to try new restaurants or do you have regular restaurants that you visit?

Ed and NQN dined as guests of Bel Mondo.