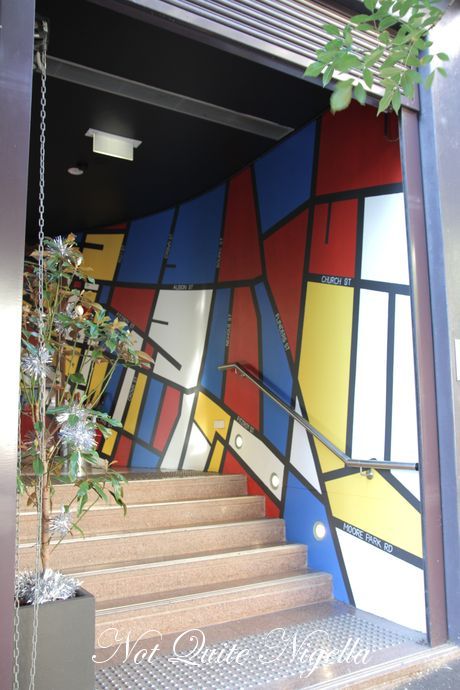 I've often heard guys say that they like girls that eat (or perhaps they're being polite because I happen to be eating with undisguised gustatory pleasure and it's nicer than saying "Sheesh you can eat!"). I'm of the same thinking, I like girls and guys that like to eat. If someone wants to pick at one tiny plate and be done with it, I'm afraid that I'm not your ideal dining companion. Tonight, I am dining with Laura, an unabashed sampler, her colleague Teagan and Laura's lovely friend Maddie who is a long time NQN reader of 2 and a half years (who is so sweet that she bought me a gorgeous present!). Poor Teagan was tasked with the impossible job of being "mum" i.e. putting the brakes on it if we happened to order "everything on the menu-twice!". A thankless task at best... 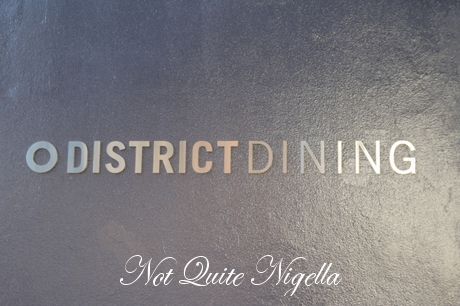 The entranceway is part subway map part Mondrian painting and the district that it refers to is the most immediate Surry Hills district. The signage reminds me of an underground. The double sided paper menu shows the entrees and mains  on one side and the desserts and tea and coffee on the other. The chef is Warren Turnbull of Assiette. 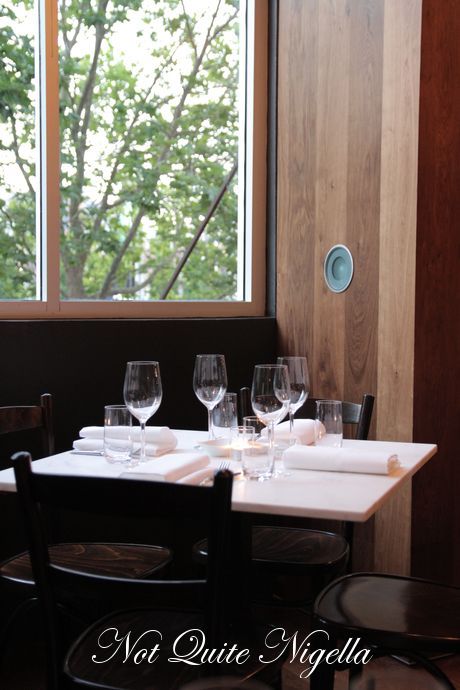 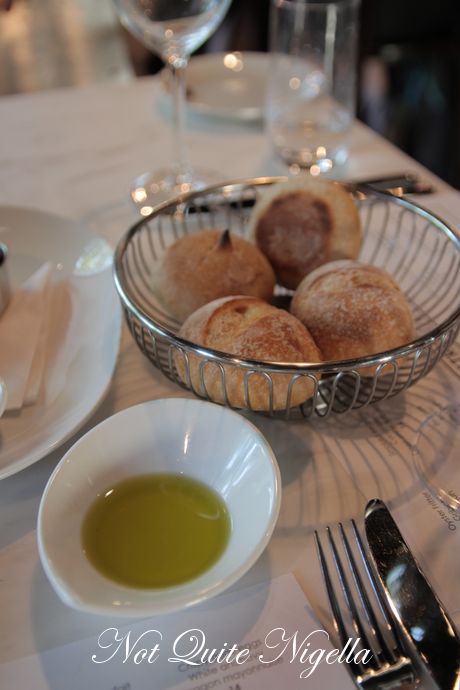 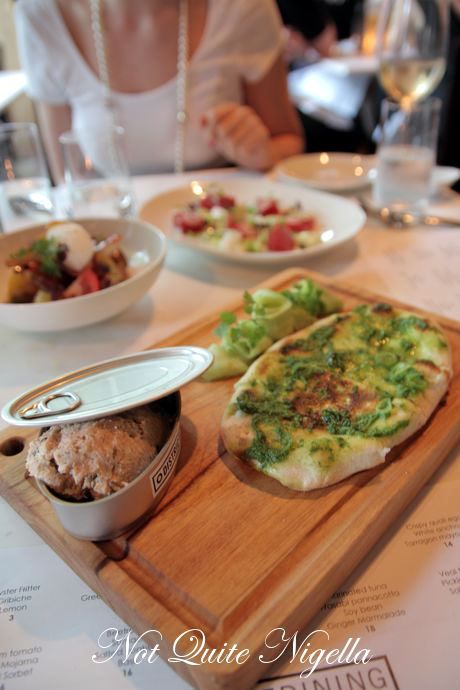 The plates are smallish in size and I'm quite glad that I haven't brought Mr NQN here as he is a voracious eater and four plates would about do him. The first to come out is the adorably presented smoked eel pate which is smooth and rich with smokey eel fillet and it is presented in a little tin. It is paired with a pickled sweet cucumber which is a nice way of cutting through the eel and a soft green onion flatbread similar to a less fluffy naan. 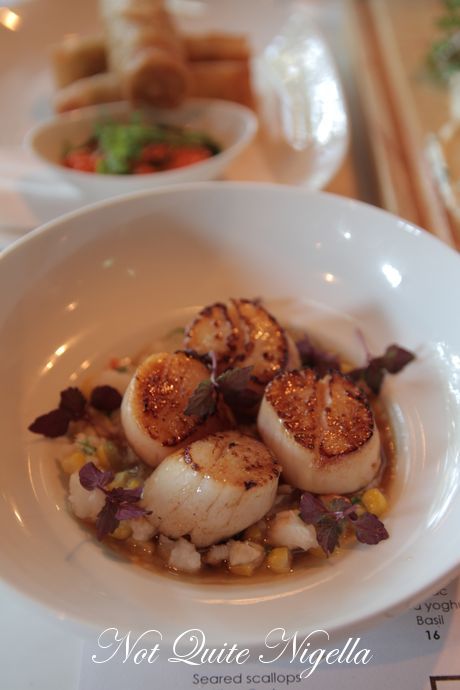 The seared scallops are lovely and seared on the outside and soft on the inside and sit on a shallow bed of sweetcorn congee. The congee has little pieces of prawns and crab scattered throughout it and it is a runnier type of congee with a flavoured broth rather than those rib sticking thick congees. 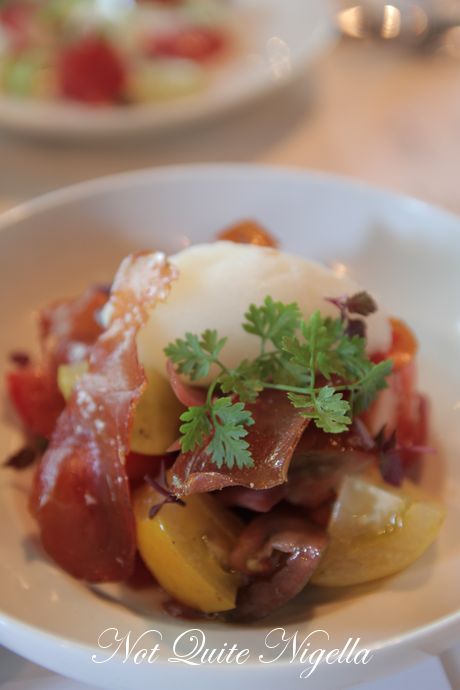 The heirloom tomato salad featured crisped up Mojama which at first looks like prosciutto but is in fact salted cured tuna. The fennel sorbet had us divided. Laura liked the aniseed flavour whereas Maddie and I felt that it was too aniseedy for our taste. I normally like fennel as it has such a light aniseed taste but this sorbet is sweet and tastes like it has aniseed added to it. 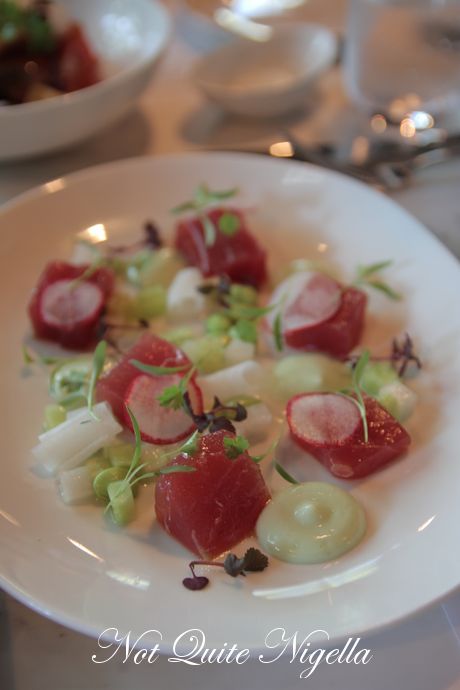 More a nod to Japan, the tuna was wonderfully fresh and served in cubes with a wasabi panna cotta which had a slight kick to it as well as shelled fresh soy beans and a pickled ginger marmalade. 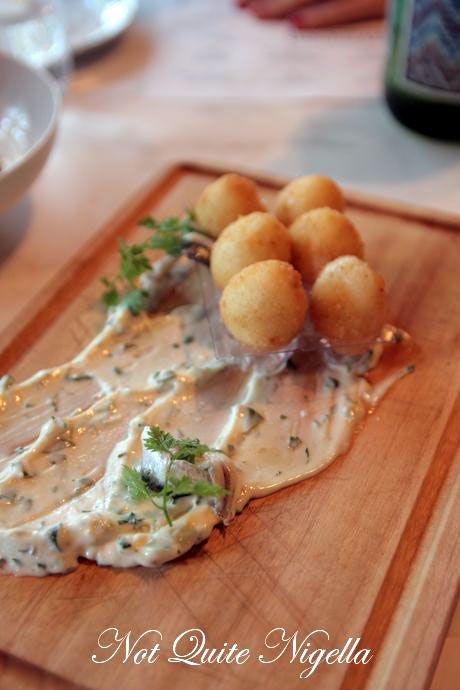 This was the dish we were all looking forward to: the six crumbed and deep fried delicate quail's eggs served with white anchovies and a smear of tarragon mayonnaise. I am a quail egg fanatic and used to eat them by the tin when I lived in Japan (although I find that the tinned ones from China aren't anywhere near as nice as the Japanese ones). Some of the quail eggs have a slightly soft centre and they're best with some mayonnaise plus some white anchovy to give it the requisite saltiness. 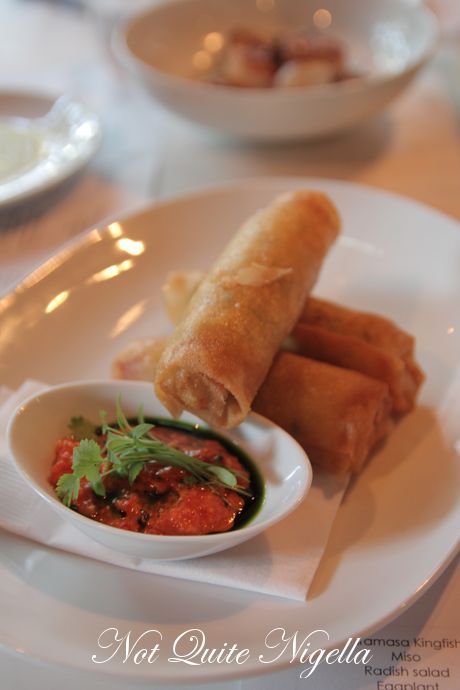 Now the thing about seafood spring rolls is that they generally often don't feature much seafood. Not so with these crunchy babies. They're full of lovely, fresh and perfectly cooked prawns and just prawns and are paired with a romesco sauce which has capsicum and garlic among other things and neat little sprigs of coriander. Service throughout the night is quite pleasant from one waitress although she does miss the beat a few times with questions and one waitress looks to have some of that inner city kind of att-it-ude. 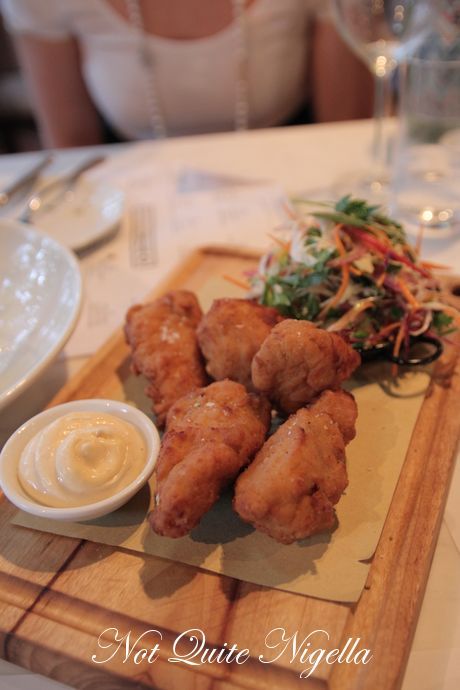 The fried chicken looks quite different from what I expected. There are five pieces of what look to be wing and drumstick portions but they are in fact boneless pieces. The salad is an Asian salad full of herbs and fresh flavours and the chicken itself is well seasoned with a crunchy coating and moist white flesh inside and a well paired lime mayonnaise. I don't know if I would say that this is the best value dish though and don't mention the dreaded N word (nugget) but they are rather nugget- ish in concept if I were to draw a low brow comparison although the execution is much better than that. 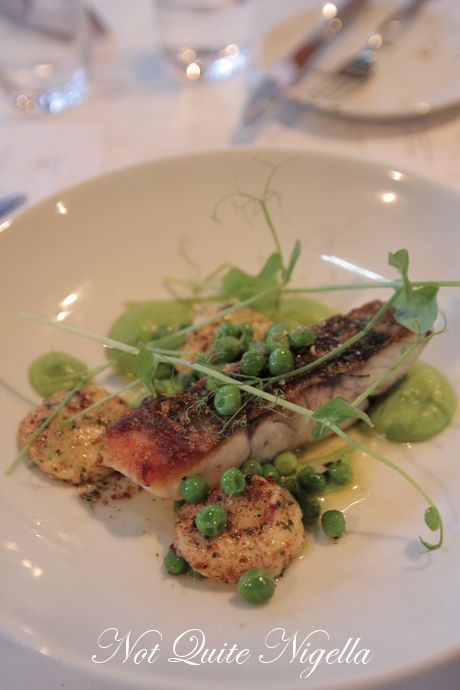 This ends up being one of my favourite courses in that it's cooked simply but perfectly. The slender fillet of barramundi has a crispy skin and moist flesh underneath and the ricotta gnocchi is an excellent accompaniment with a slightly spongey texture. There are also peas and a pea puree and tendrils of pea sprouts decorating the top. 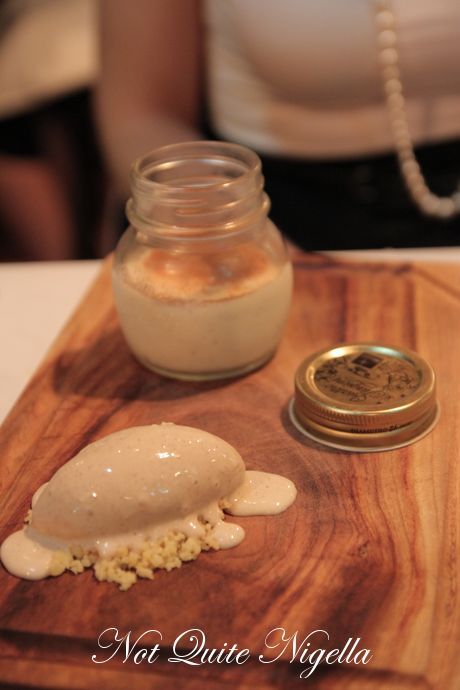 Served in a mason jar, the rice pudding is impossible to photograph (I resisted the urge to get up on a chair to capture the cinnamon on top) but it is milky and delicious with the rice being a good consistency just like Goldilocks' porridge, not too soft and not too hard. The cinnamon ice cream sits on a bed of crunchy crumbs and is quite strong in cinnamon. 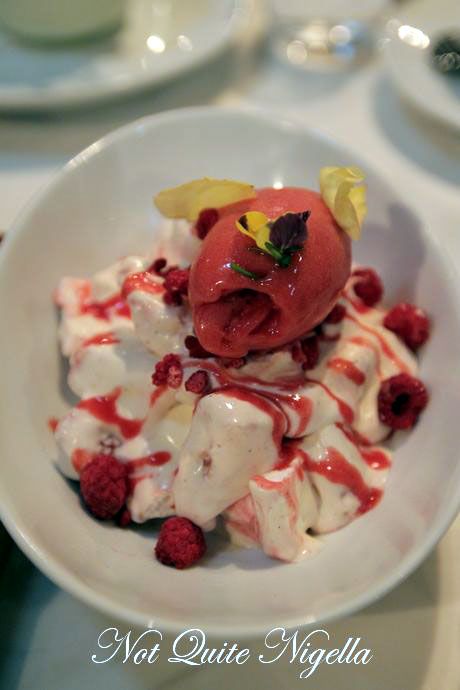 Now this was a gigantic dessert! Enough for three this Eton Mess style dessert it is layered with fresh and freeze dried berries and pieces of meringue and folds of vanilla cream and a terrifically fruity sorbet. 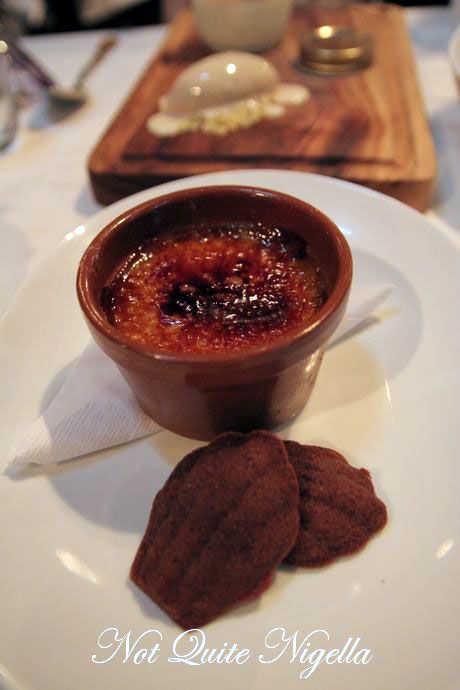 The white chocolate brulee has a thickish, crunchy toffee crust and is slightly runny underneath but is moreish. We ordered this because it came with chocolate madeleines and I think there is a rule that if your name appears on the menu then you should order said item (Maddie and Madeleines). Quiche Lorraine excepted ;) 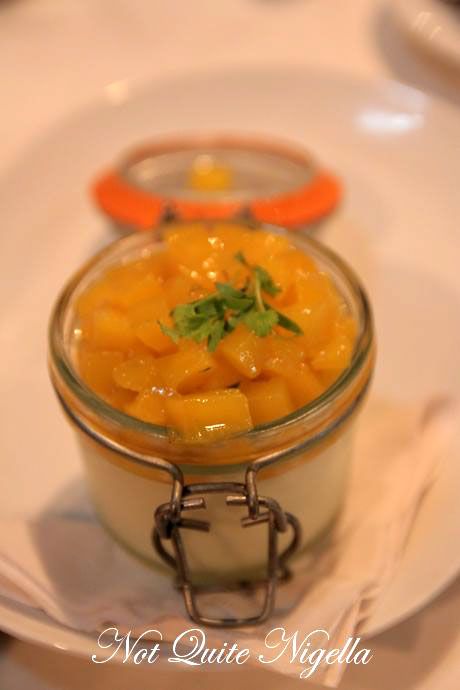 The coconut panna cotta was served in an Italian preserving jar and was topped with finely diced fresh mango, a squeeze of lime and coriander. The flavour of the panna cotta was good but it wasn't set and quite runny underneath.

I don't know if Teagan managed to keep our ordering under control given everything that we tried!

So tell me Dear Reader, if you see a dish with your name on the menu, do you order it? 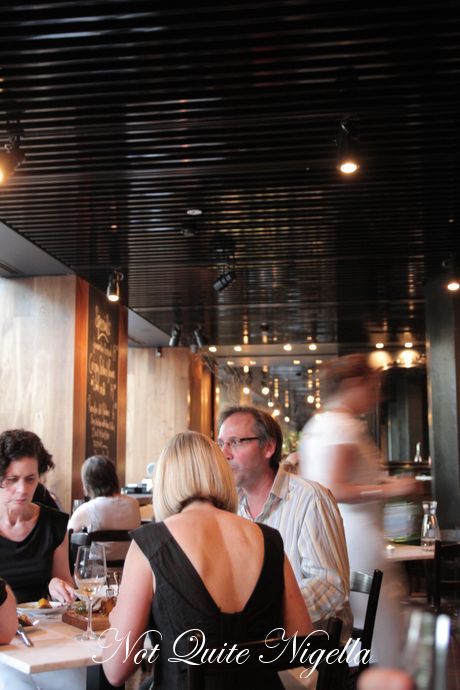 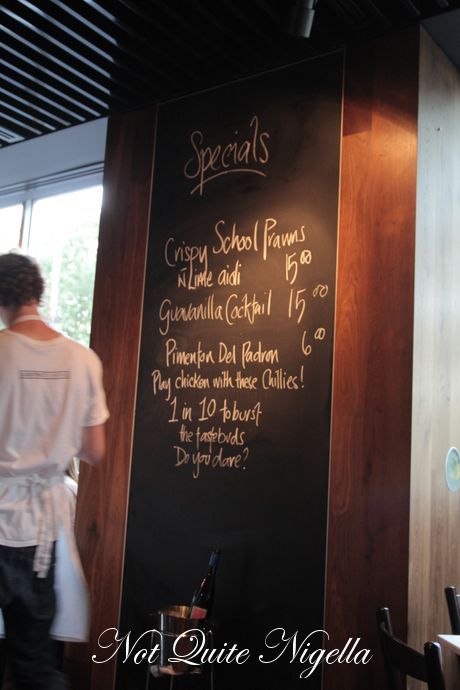 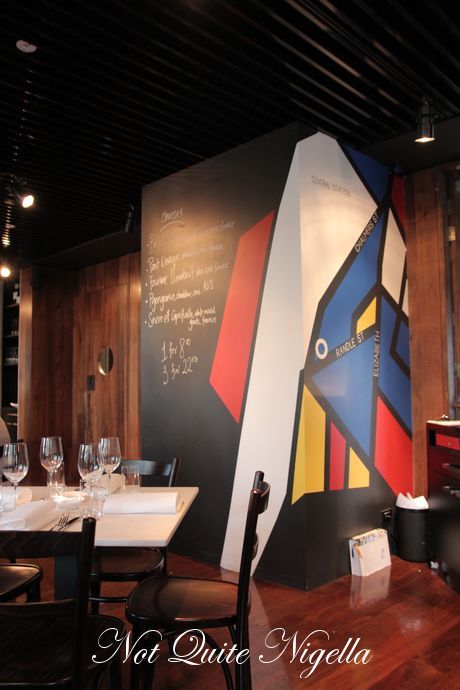