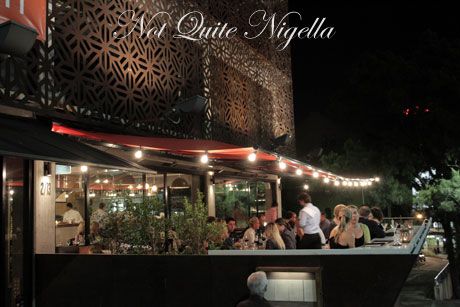 When I worked in advertising I was offered a job in a research firm by a former client. I had apparently impressed him in being the only person in the ad team that could give him a straight answer (advertising is of course well known for giving the fluffy answer and people that can bulls**t do very well).  It was at a very prestigious marketing firm doing the TV ratings etc but another client of mine scoffed at the idea "Look you like making the deals, you don't want to be stuck behind a desk doing research". It was true, I loved the wheeling and dealing and the research job was rejected. 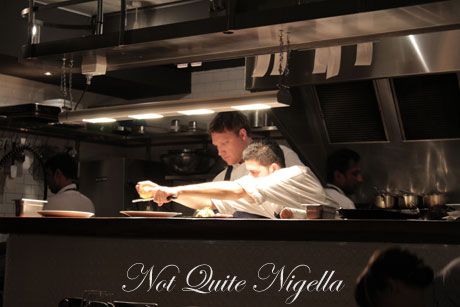 I still love doing research though but nowadays it's more to do with food research and this evening when Mr NQN and I are off on a  romantic date to Tomislav in Darlinghurst I've come armed with a list of must eats gleaned from Joey's review here. This evening ex Fat Duck's of the U.K. and Koi of Sydney, Tomislav Martinovic appears at the helm surveying those around him at the open kitchen. There is a large balcony area which tonight seems to be reserved for large groups and the iconic Coca Cola sign blinks down at us and seems only metres away. The maitre'd is very friendly and welcoming to all. 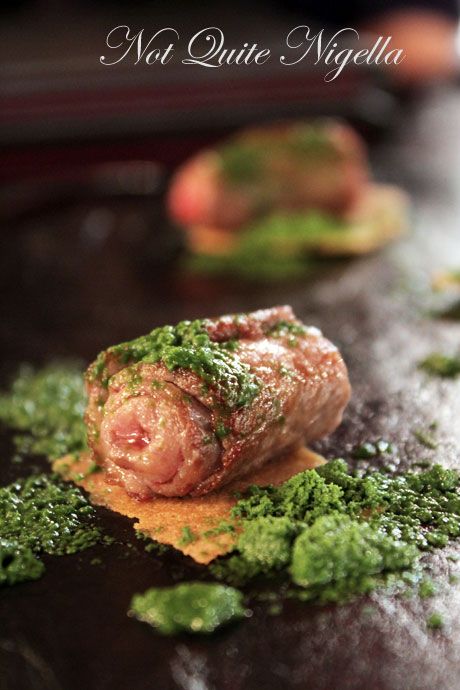 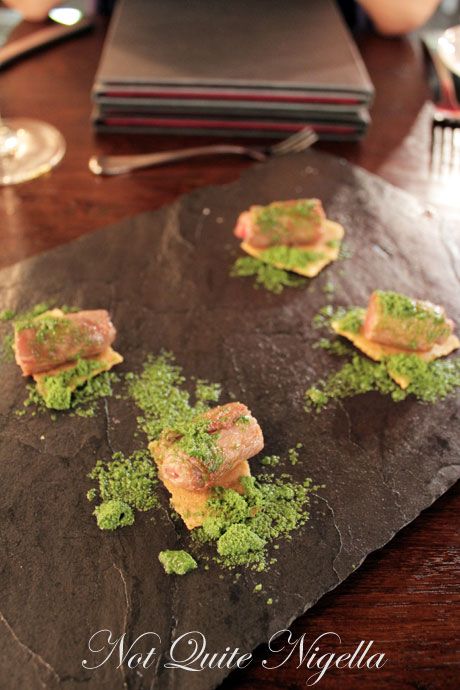 Most of the food appears on dark grey slate plates giving it a certain feel and the serving of four beef rolls comes with a liberal serving of vivid green powder. The waitress says to us "Don't worry the green wasabi crumbs aren't as hot as you'd think" and so I pop a round beef piece perched on a paper thin wafer into my mouth. The beef is perfectly seasoned, the wafer buttery and the wasabi crumbs more creamy than crumby with a hint of wasabi. The green looks to be from something like pureed spinach which gives it that bright green. They're a great morsel to start us off. 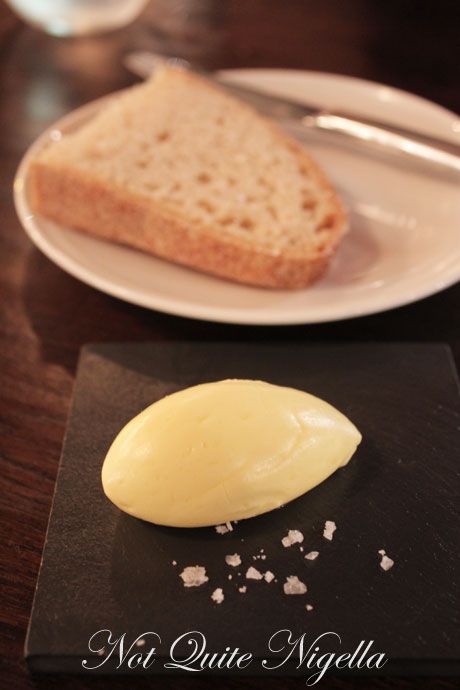 The rye bread is thick with that distinctive aroma and the quenelle of soft, whipped butter is very light. I find that the rye with its strong flavour needs a strong butter to go with it. 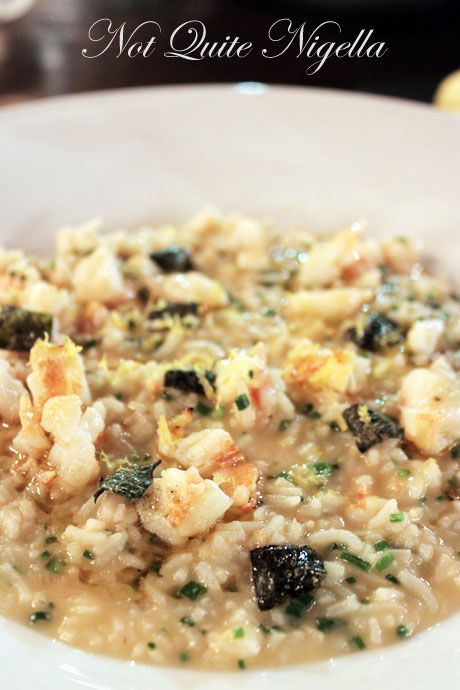 I was a little disappointed to see that the scallop risotto was off the menu-I am a bit of a scallop friend but the prawn risotto looks like a fitting substitute. Made with basmati rice it's much lighter than a traditional arborio rice risotto. It's spread out with a creamy lemon zest and chive sauce and the whole dish is delicately executed with just the right amount of  chive and lemon zest and perfectly cooked pieces of prawn . The little black squares are pieces of dried nori seaweed. 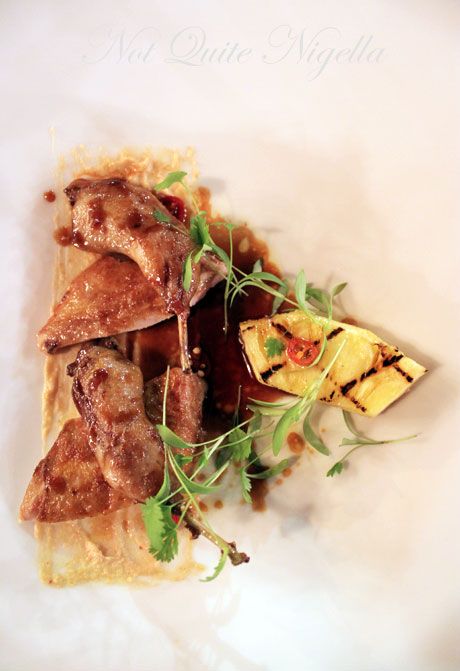 The Asian style quail is paired with a coriander and chilli sauce and grilled pineapple with little pieces of bird's eye chilli. It's well balanced but I'm still trying to renegotiate the return of my risotto. Yes I've taken claim on the risotto as mine. Sadly the negotiations for the safe return of my risotto did not work out and Mr NQN polished it off. 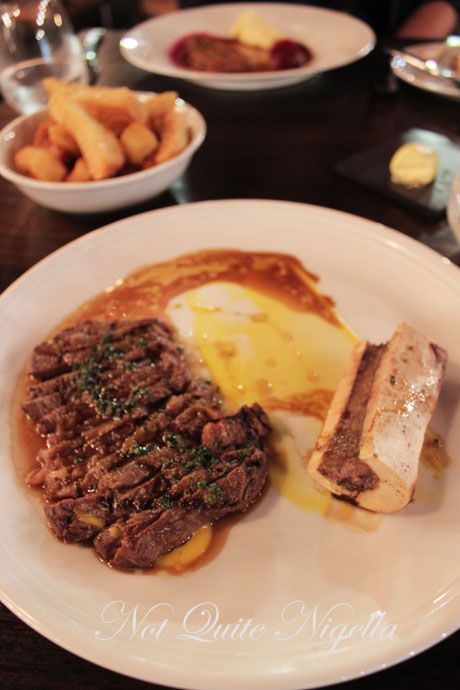 The beef comes pre sliced and is cooked medium rare. It comes simply paired with roasted bone marrow, a smear of grilled mango sauce and a chive sauce. It is ambrosial especially paired with the chips. And if there was any doubt that Mr NQN and I were destined for each other it's the fact that he doesn't like bone marrow and I adore it and so he gives me his share of the bone marrow. Forget diamonds, it's about the bone marrow (ok I didn't quite mean that, diamonds are important too ;) ). 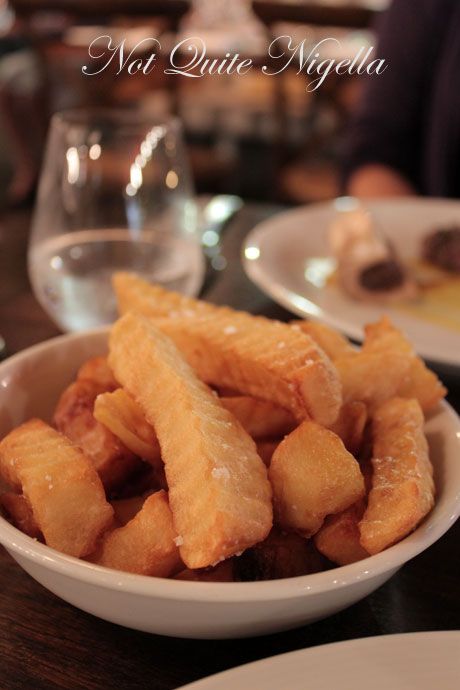 Did I mention the chips? They send people over the moon and these fat little crinkle cut beasties come golden brown and all in various shapes and sizes so they appear to be hand cut. The outside is crunchy with the inside potato lovely and fluffy. 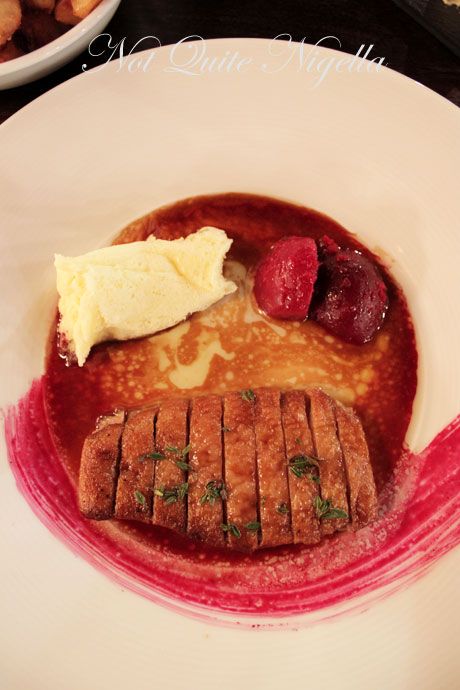 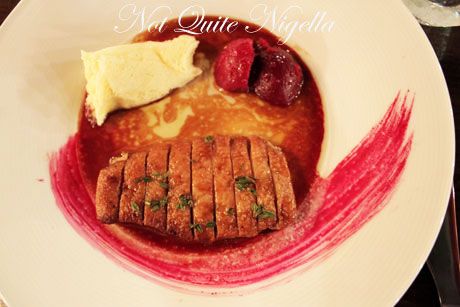 The duck breast too comes pre sliced and is paired with baby beetroot and an olive oil sponge which is as light as a chiffon sponge. They beetroot sauce is earthy and tangy and the sponge gives it a richness so that it never becomes too tangy. 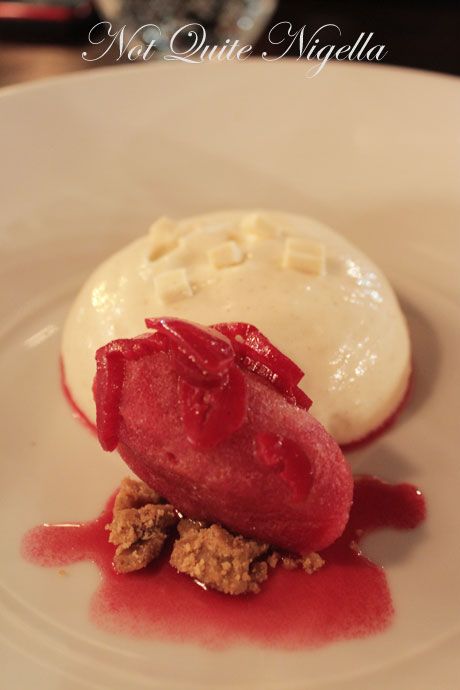 I'm afraid to say that I rarely order cheesecake. It's so easy to make that the idea of ordering it, no matter how fantastic it never appeals to me. But I'm convinced to order this from the waiter and the waitress. I'm glad I did as it arrives as a jellied wobbling dessert with cream cheese jelly cubes scattered throughout. Yes cream cheese jelly cubes! I take my spoon to it and it's light as air. It resembles a mousse but it's more a mousse crossed with a foam. It's accompanied with candied rhubarb which has an unusually firm texture similar to cooked beetroot (I'm used to eating rhubarb in crumbles where it is stewed where the consistency is soft)  and a tartly refreshing rhubarb sorbet and large cheesecake crumbs. 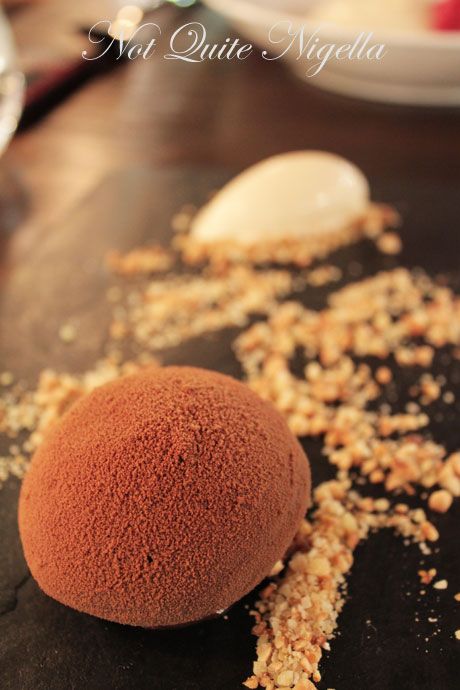 "My dessert is alive!" Mr NQN exclaims. Allow me to rewind a few minutes. The chocolate mousse comes as a chocolate sphere with a scoop of vanilla ice cream as well as a smattering of toasted hazelnuts. Unlike the cheesecake, the mousse is firmer, less airy and creamier and with a surprise inside via whole toasted candied hazelnuts which give it a lovely crunch and sweetness. But wait there's more! And before I sound like I'm spruiking cleaning products, I am going to ruin the surprise so look away if you intend to dine here and want to be surprised... The surprise is actually pop rocks hidden amongst the toasted hazelnut crumbs which start exploding when the vanilla ice cream starts to melt on this warm Autumn evening from copious photo taking. On cue after he claims that the dessert is alive, there's a pop and he pulls back alarmed and rubs his arm as a bold, rogue pop rock pops on his forearm*.

*there were no arms seriously harmed eating this dessert ;)

So tell me Dear Reader, do you research your meals before you eat out so that you know what to order?_ 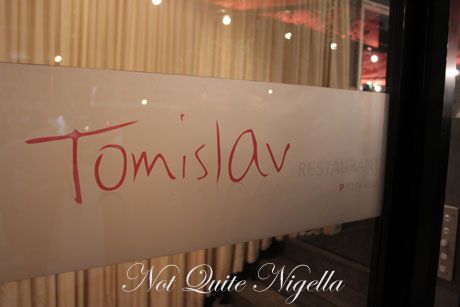