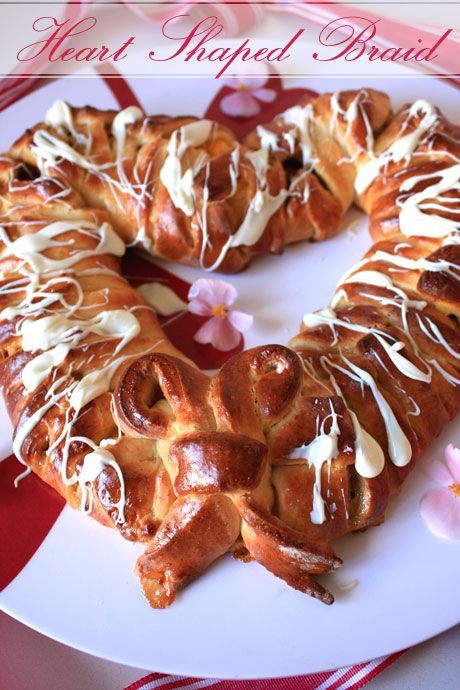 I feel like I have a bit of a connection with Mother's Day. No, I'm not a mother but having a birthday on May 8th means that often Mother's Day overlaps with my birthday (or at least the Mother's Day weekend). This year, my birthday is the day before and all I want is a simple birthday really. I told Mr NQN all I wanted was a few simple things: sushi and sashimi for dinner, a massage, the Stieg Larsson trilogy, a new Moleskine and I wanted to watch my favourite TV shows in bed. Who says I don't have simple tastes? ;) 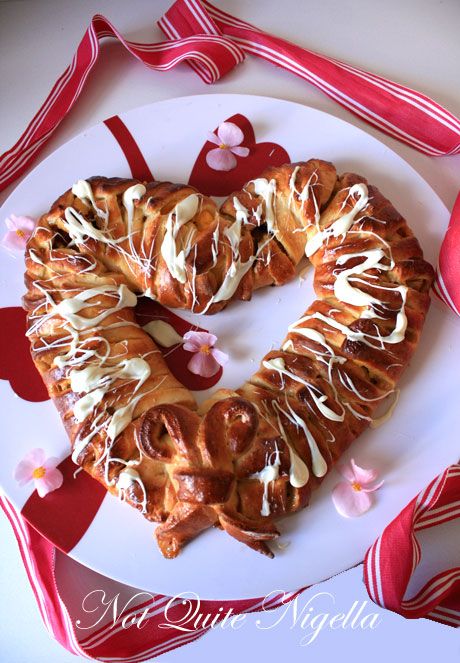 Luckily I am not a tyrant (I know you might be thinking of the Red Queen from Alice in Wonderland) and I realise that asking Mr NQN to make this for me means that a) it just won't happen and b) more importantly I won't get to eat this. So I made this and I gave a frozen one to my mother to eat on Sunday and I slipped another one in the deep freeze for him to heat up for me in the morning.

I remember Barbara's fantastic Candy Cane Kolache from Christmas which I always wanted to make and it appeared to be the perfect recipe-after all you get a heart when you put two candy canes together. I used her white bread roll recipe which worked a treat. I decided to make use of the lovely Bramley apples that I found on the Farmgate trail which are said to be hard to find but the best cooking apples on earth according to the British. I made the dough the night before as I wanted it to really rest well and not bounce back because of the plaiting I was going to do. I also made the custard and apples then too as I was nervous enough about doing the plaiting as it was and I didn't want the chaos of a sinkful of dishes to put me off even more (yes I don't like sinkfuls of dirty dishes, oh the horreur!). 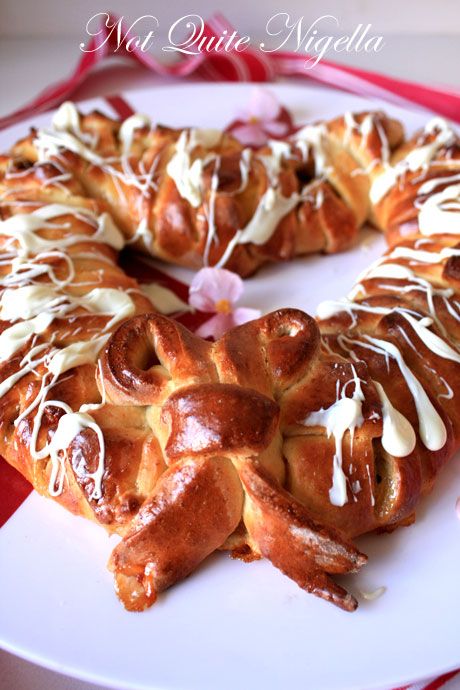 I think it's particularly suited to Mother's Day as we always used to make my mother breakfast in bed when we were little. I'm sure she was just grateful for the chance to sleep in and making breakfast occupied us for at least an extra 30 minutes so that she was woken at 7am instead of 6:30am by us. I don't do it anymore of course, that would be strange to let myself in to their house and start baking and I'm sure they'd think that it were an intruder rather than a surprise breakfast maker.

It ended up tasting wonderfully good, like a Danish but more bread like, the soft apples and custard and sweetened white chocolate drizzle were just a slice of heaven and using the bread improver always gives it that extra edge for softness. If anything they reminded me of those lethally addictive apple and custard scrolls from Bakers Delight (you know the ones with the shiny white icing that have about a day's worth of calories in each one? ). I was over the moon with happiness when I tried these and that's not even counting the reaction from Mr NQN and my dad who were delighted that they didn't have to cook breakfast this weekend!

So tell me Dear Reader, did you make breakfast for your mum when you were a kid and what did you make?

Makes one large heart that can feed six people

Buyer's tip: Bread Improver can be found in the baking and flour aisle of supermarkets (I bought it at Coles)

Step 1 - For dough, in the bowl of an electric mixer, add flour,bread improver, salt, yeast and sugar. Mix until well combined. In a small saucepan mix the milk and butter until the butter has melted but it is not too hot - a slightly warmer than lukewarm temperature(too hot and you will kill the yeast). Add egg and whisk and then turn the dough hook onto low and pour this mixture gradually into the flour mix. If it needs a bit more flour to become less sticky, add it in 1 tablespoon amounts. Knead until elastic (about 5 minutes). Shape into a ball and place in a greased bowl and turn the dough around in the greased bowl so that the ball is covered in oil. Place cling wrap on top and rest in fridge overnight or for 1 to 1.5 hours in a warm place.

Step 2 - Make apple filling by placing cubed apples, sultanas, cinnamon and brown sugar with 2 tablespoons of water in a saucepan and cook until apples are soft but not mushy. Cool. You can also put this in the fridge until you want to make it. 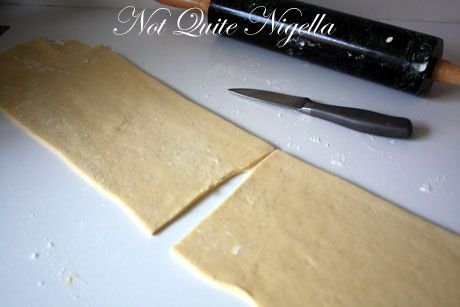 Step 3 - When ready to bake, preheat oven to 200C/400F and line a large baking tray with parchment. If your dough was in the fridge, let it rest outside for about 10 minutes or so to soften up. Then place on a lightly floured surface and with a lightly floured rolling pin, roll out into a long rectangle. You will need to trim it with a sharp paring knife and ruler but essentially you want a 70cms (28 inch) long rectangle that is 15cms (6 inches) wide. Cut this rectangle in half so that you have two 15cm/6inch by 35cm/14 inch rectangles. Keep the braid trimmings to make a bow or do do patch jobs if you need it. 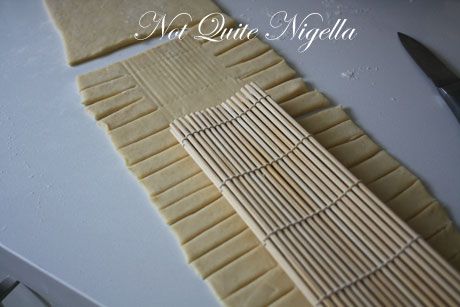 Step 4 - To cut the braid dough, I used whatever I could get my hands on for a guide-it turned out to be a sushi mat. Cut strips on the side-you don't want to cut the strips too long as that will mean that the "body" of the pastry is too thin. Make concurrent matching cuts on both sides at the same height. Then leaving a space at the top and bottom, spoon some of the apple filling (don't use the liquid) and then a little custard. It's best not to overfill it. Fold over the top and bottom as they will prevent the filling leaking. Then taking the left strip, cross it over and then cross over the right. Keep doing it for all of them. This will end up being one half of the heart. 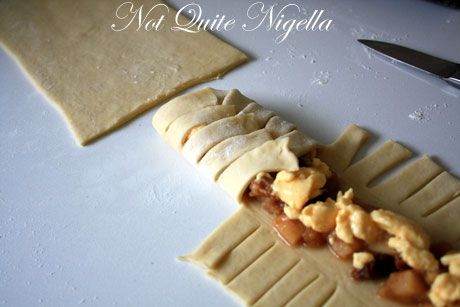 Step 5 - Carefully transfer this over to the parchment and curve it around so that it looks like one half of the heart. Repeat the process with the second rectangle of pastry and join the two heart halves together. Make a long ribbon with the extra bread dough trimmings and shape a bow. If there are any large gaps with the filling showing, you can add a few more strips.  Brush with egg wash and bake for 20-25 minutes until golden brown. And don't forget if you have extra dough, to roll it out, fill it with any extra custard and apple and make yourself a cook's treat ;) 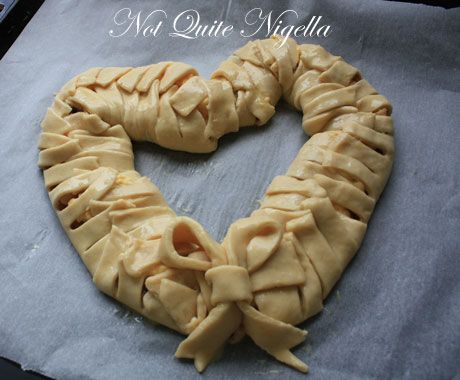 Step 6 - Once baked, melt white chocolate in a double boiler or in a microwave and drizzle it over the bread. 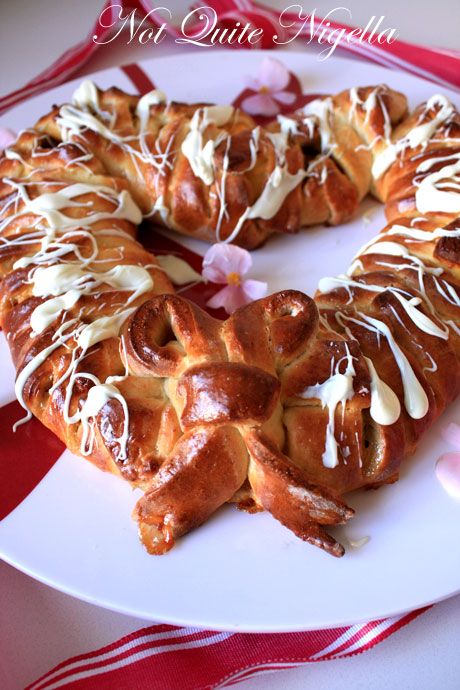