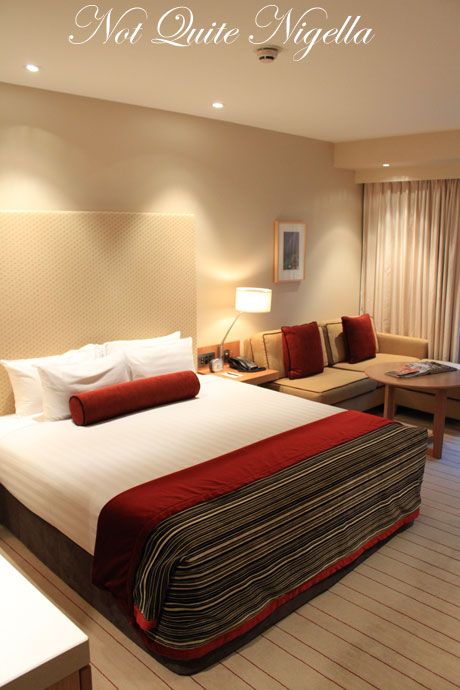 With the Treetops cooking class a wonderful memory we rush to get to Auckland in time for our booking at Euro at the Viaduct. We reach the Sky City Grand Hotel with nary a moment to spare. The hotel location is good, it is located right in the centre of Auckland. There's no time to spare to check out our room though as we are late late late! 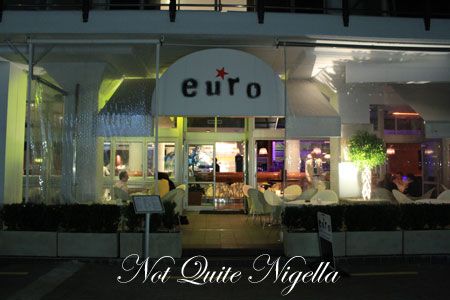 We take the short walk to the Viaduct which is similar to the Darling Harbour area of Sydney. It's on the waterfront and it is buzzing this Saturday night. We're seated in the front corner with a window view. The menu is interesting with some classic dishes and some innovative ones. Curiously there is even a Pie of the Day with a "P.O.A." written after it. Price on Application for a pie? I've seen P.O.A. but usually in fashion magazines referencing couture outfits or properties that you just cannot afford - not a pie. It turns out the pie of the day is a fish pie for $38. Our waitress comes over after quite a while to tell us the specials. The poor gal is clearly run off her feet although when we try and catch the eye of other staff members standing there and chatting they see us although they don't come over or tell her which is a little irritating. 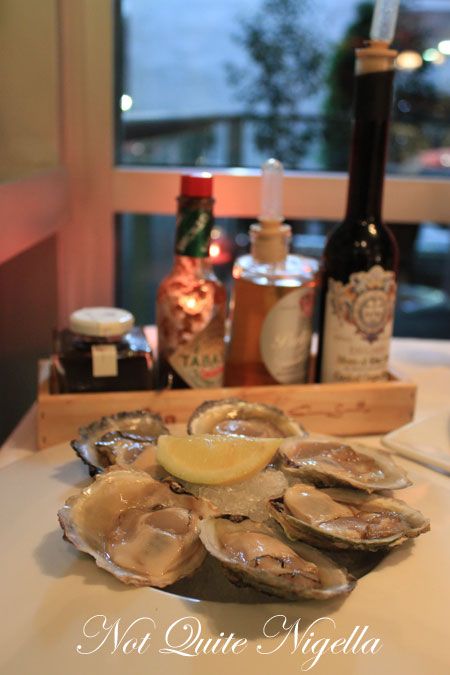 The Bluff oysters are in (yay!) and here they come with four different accompaniments. There is raspberry saba which is a sweet unfermented syrup, balsamic jelly which is nice but a little overwhelmingly sweet and strong for the oysters, smoked Tabasco which is too strong for the oysters and prelibato, a cooked grape must which is slightly sweet and unusual. We feel like Goldilocks trying to find the perfect fit. 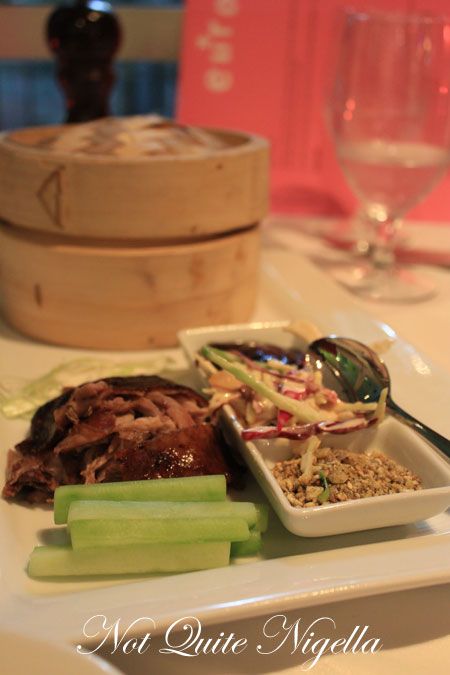 I wasn't sure whether to order the Peking duck, after all I've had some great Peking duck and not so great Peking duck and I can be fussy about it. Mr NQN is wary when I suggest it but as it's one of their "classic" entrees I try it. The skin is not crispy so this is more a roast duck than a Peking Duck and it's mostly duck meat with three pieces of skin. The pancakes are more crepe like and very thin and each one breaks halfway through eating the pancakes. However despite all of this the nutty dukka worked really well in it and even the slaw (although it needed to be sliced finer), was also a nice addition and we both really enjoyed this dish although Peking Duck purists might not. 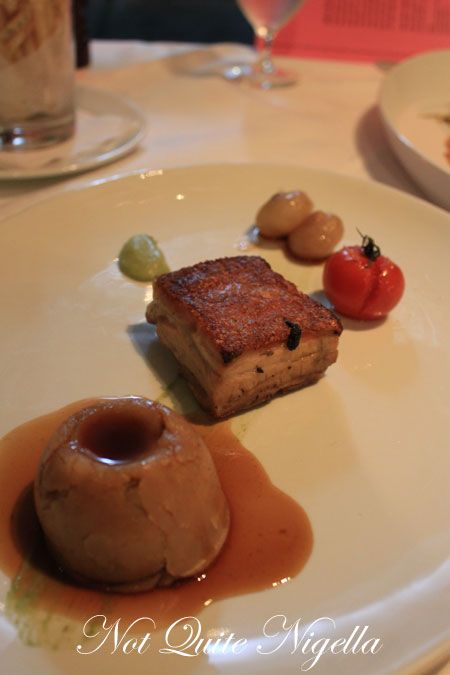 The pork belly was beautifully cooked with the crackling gloriously crispy and the belly meat layered with fat and soft meat. The accompaniments weren't such a great match with the mushroom pudding not being a pudding at all but rather an upturned shortcrust pie with a thin sauce poured over it so that it became a wet pie. The sauce was too thin to call itself a gravy. I prefer pork with sweet flavours rather than mustards (which I think goes well with beef) so I didn't really go for the other accompaniments and ate the pork belly by itself. 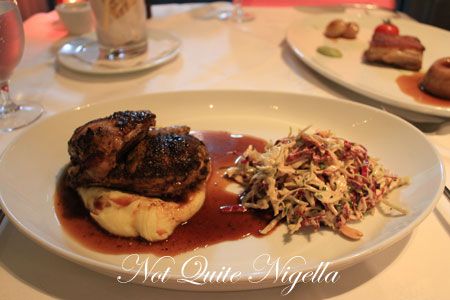 This is a very generous serve and this dish has apparently been on the menu since the restaurant opened. It's strong in oregano and perhaps a bit too strong but the thigh piece is juicy and the pick of the two. We have it with a creamy mash and a peanut slaw. The peanut lends it crunch rather than giving it a satay flavour. 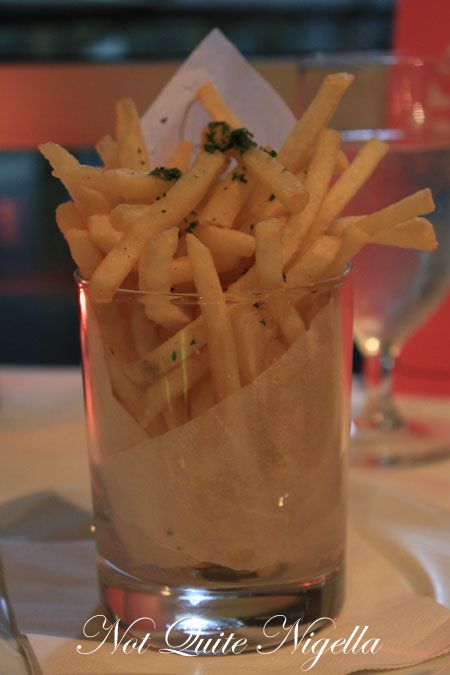 The garlic french fries are good with garlic flavour but could use more cooking as there were a tad soggy. 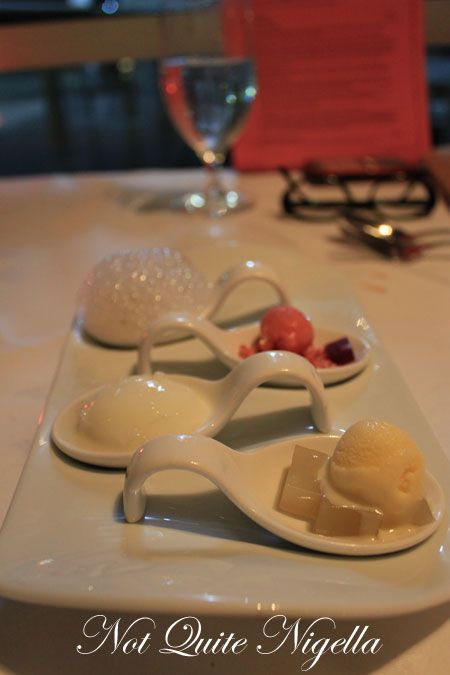 I appreciate that the kitchen is trying to be innovative so we try the Spoons of 2012. From front to back in this picture there are four spoons: mascarpone ice cream with feijoa jelly which is fantastic with a creaminess and fruitiness. The feijoa in this tastes similar to apple. Then there is the organic yogurt and gorgonzola honey egg which is a membrane-like, very thin cooked egg white a with burst of gorgonzola, honey and yogurt inside. The egg that they speak of references the look. I first taste honey and then gorgonzola and it is very pleasant. The third spoon is the berry fizz which is very sherberty and dry and sticks to the top palette and straddles the fine line between pleasure and pain. The last spoon is the honey sphere and lychee air. It is mostly air but pleasing. My favourite spoon was still the first one. 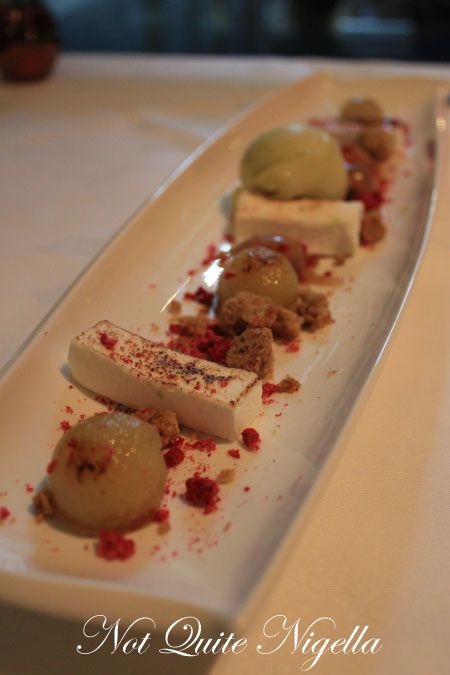 Mr NQN's dessert looks wonderful and lives up to its looks. The same shell technique is applied to the caramel so beware and don't swallow one of those oval brown balls as all you'll get is a mouthful of  gushing caramel. The cinnamon apple is aromatic and there is tartness from dried raspberries and it is a good sized dish.

The menu rather cheekily suggests that "At Euro we encourage gratuities for very good service ". I don't think any Sydney establishment would ever be that cheeky to encourage tipping on a menu but as the service was very good after a slow start we tip our waitress well. She has been lovely and knowledgeable not to mention furiously busy all night. We leave to see two staff members standing there chatting and laughing while she zips furiously around them. We look at each other and say "We should have tipped her more".

So tell me Dear Reader, how often do you tip at restaurants? All of the time? Or only if service is good?