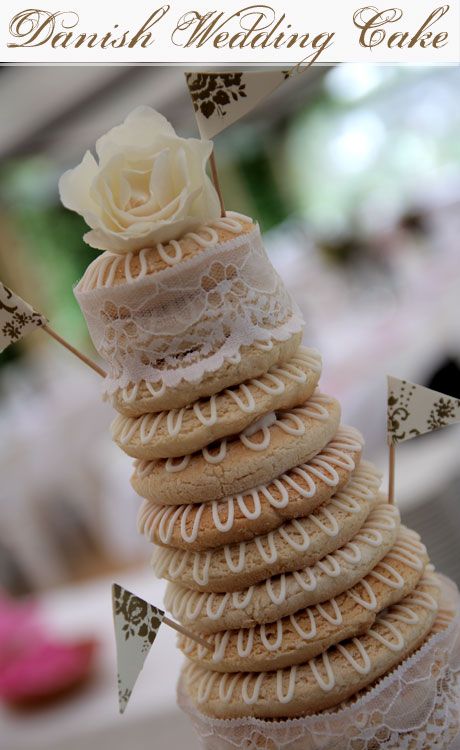 In my humble opinion, I would guess that for most guests, weddings are all about two things: the speeches and the food (dinner and a show if you will). The reason why I include these two things is because I am thinking about the men folk who don't really care about a bride's dress or the designer of her shoes whereas that's my very first question. They simply want to be fed a nice meal and be entertained by a funny speech. Mr NQN's brother The Assman was his best man at our wedding and he did a great job. 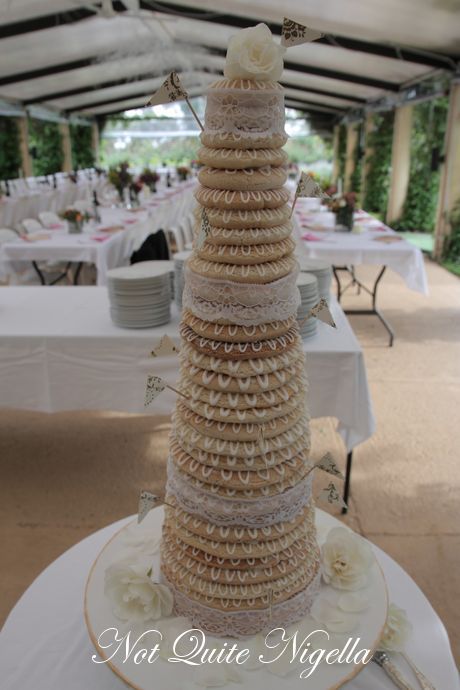 He started off with an anecdote that about the role of a "Best Man" during centuries past. It was such a sweet and funny speech that when we attended a wedding of a couple of guests a few months later we found that the best man there used the same anecdote. Except this best man decided to give his a "racy" tone and suggested that the best men of centuries ago used to help the groom find and knock up a girl and sling her on the back of a horse after some non consensual "hi-jinks" in the forest. It went down like a lead balloon and there were several gasps of shock from the older crowd and he abandoned his speech mid word muttering an apology. Oh dear. 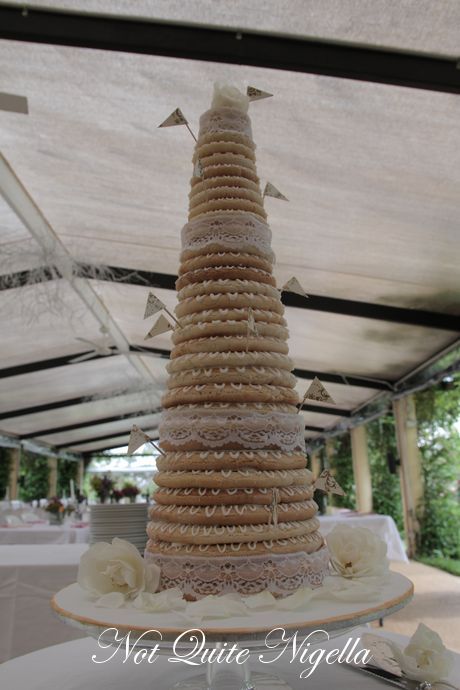 So what does this have to do with the Danish wedding cake? Well the Kransekake cake comes in two forms. The traditional wedding cake is a conical shape. But you can also use the same dough to make a horn shaped cake called an overflodighedshorn where the open end of the horn is stuffed with chocolates and other sweets. I bought one last year and presented it to my friend The Second Wife and her fiancee Gravy Beard at their engagement party. It is to the non Danish or non Norwegians quite a sexual looking bacchanalian looking object. I must apologise to the Danes and Norwegians for finding it that way but every other guest at this party had the same reaction raising their eyebrows suggestively and asking where the roman orgy was. 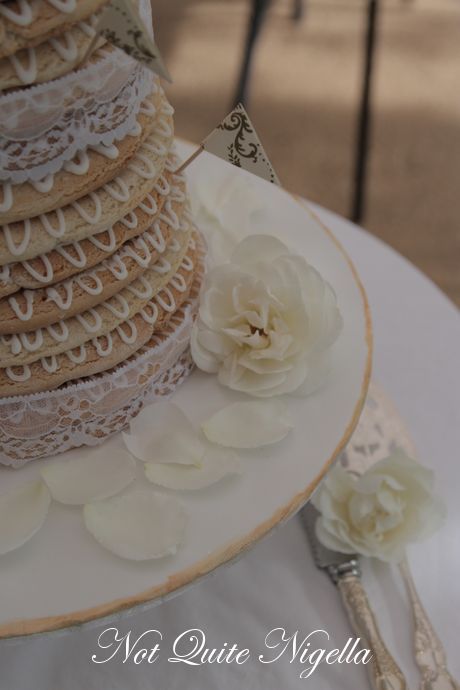 I had all but sworn off making wedding cakes. I made one for Mr NQN's family a few years ago and it was so traumatic that I simply never wanted to do one ever again. But then The Second Wife asked me with the magic words-I could do anything that I wanted for their cake. Anything? Like the Danish wedding cake? I knew that I wanted to make this cake but suppressed any urge to make the horn version lest there be suggestive eyebrow raising or hints to retire to an orgy room as that does not befit a wedding. I didn't want to be the cake equivalent of that best man's speech. 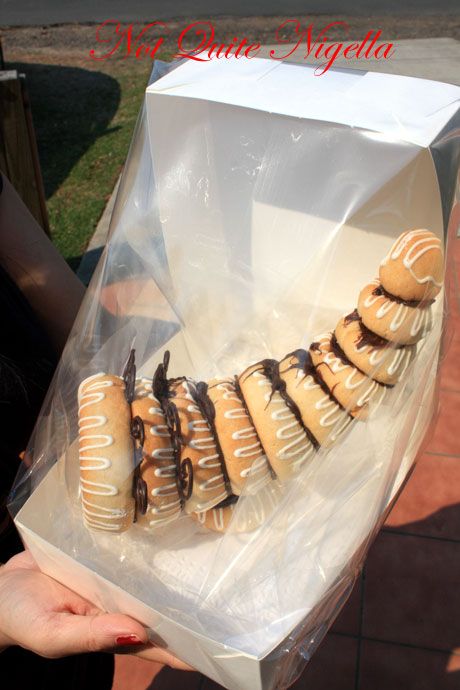 The cake itself is easy enough to do provided you have the molds. I was lucky enough to be able to borrow the molds from the lovely Faye Cahill, wedding cake decorator extraordinaire. We were talking cakes, as you do, and I explained that I needed to make a wedding cake for a friend and that I wanted to do a  Danish wedding cake but thought that it might be too hard to do without the guides. Faye told me that she had a Danish wedding cake as one of her cakes (one of her cakes, I mean of course she would have multiple cakes) and she would lend me the molds! 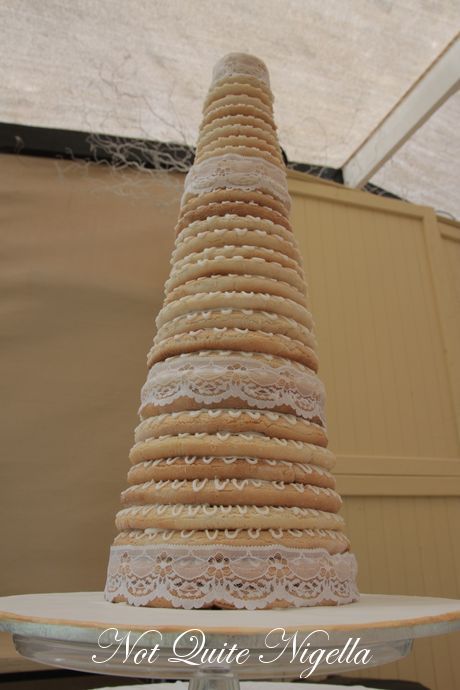 The cake is basically made up of almond meal, icing sugar and egg whites mixed together and then rolled out into these molds and then baked. The rings are then stacked on top of each other and sandwiched together by royal icing. And there was a recipe on the side of the box which I followed but I found that it wasn't quite right. It called for the dough to be warmed and dried out and then cooled which I found nearly impossible to roll as it was so dry. 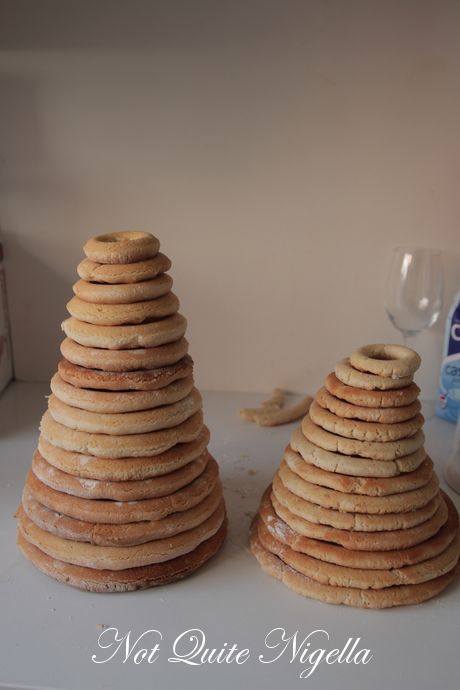 On the left, the recipe below. On the right, using the recipe provided on the box

It was also a lot shorter than I wanted-a wedding cake after all is supposed to produce a heightened sense of reality and this was just a let down at a mere 21cms high. So instead I searched on the internet for a few recipes and none of them called for the dough to be cooked and then cooled. I found these recipes much easier to roll. And once I decided on the recipe the cake was pretty much mixed within 10 minutes, prepped within 15 minutes and only required 10 minutes in the oven. The resulting cake is about 30cms tall and tall enough to make an impression but not overshadow the bride-as if! 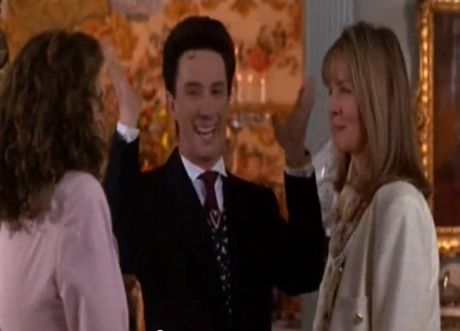 But of course you know the inner Franck Eggelhoffer in me wouldn't stop there. He said "OK zis veddding kak is only sirty centimetres tall... let's double it!". Which I thought was a good idea at the time until it came to transporting it. 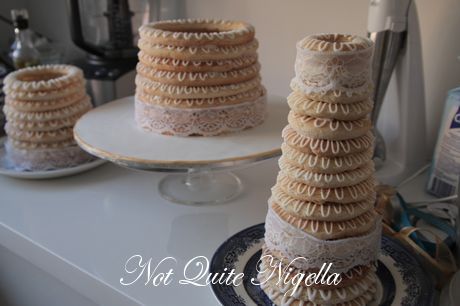 This is how we decided to transport it: in three parts. It would have been too precarious to move otherwise. Unlike other cakes, it has no scaffolding apart from the royal icing and half whispered prayers. And it needed to go to Kurrajong Heights which is 1 hour and 40 minutes away. And besides that, that morning I was getting some eyelashes applied at the skillfull Lash Lady Charlotte in Newtown. Then I was getting my hair done at the fabulous Stevie English salon in a Mad Men/50's style as there was a group of us attending the wedding outfitted as if we were from this era as it is The Second Wife's favourite time. I showed my stylist Verity a picture of the style that I wanted and it was done perfectly to brief! 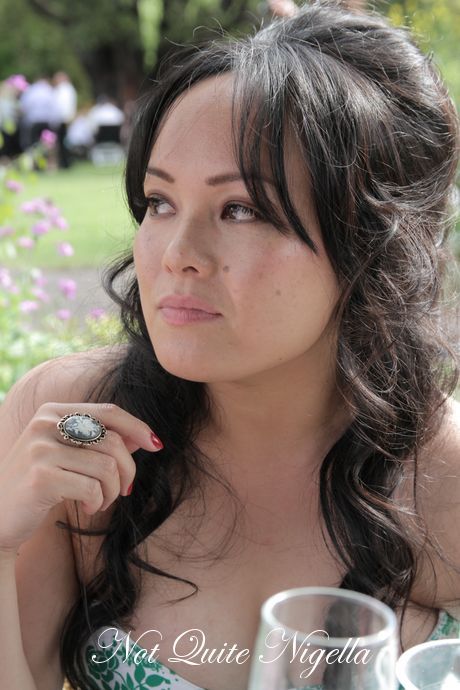 We had a large box with a lid where we put the large bottom layer and we strapped that into the back seat belt. The middle and top layers sat in a box on my lap and on my lap lay a large flat stand to give the box as flat a surface as possible. 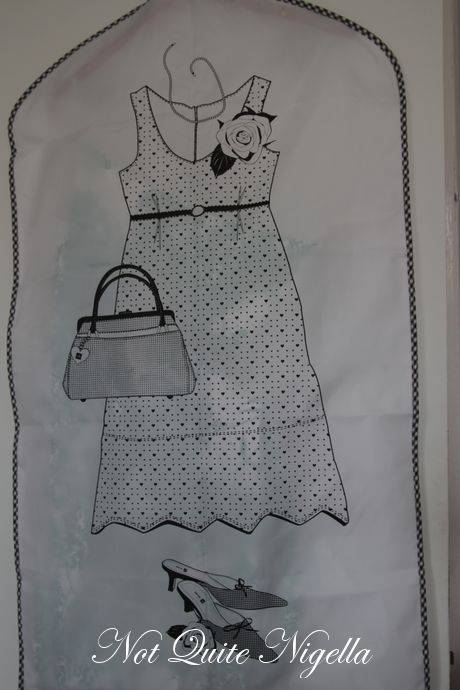 It was being held in an outdoor marquee so we quickly took it out, placed it on the cake table and I "glued" the middle section onto the bottom section. We then checked into our nearby accommodation at The Rustic Spirit but barely had a chance to enjoy it as we had to shower and get changed and high tail it back 40 minutes later to cement on the top layer before the wedding started at 3pm. 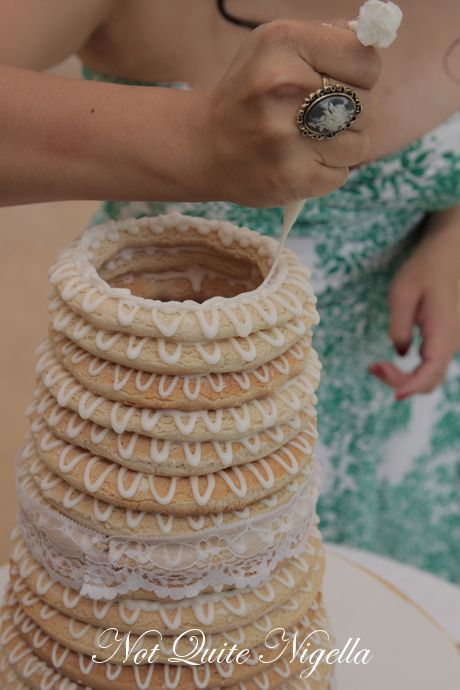 Hurriedly icing the top layer to the middle and bottom layers ten minutes before the ceremony started... 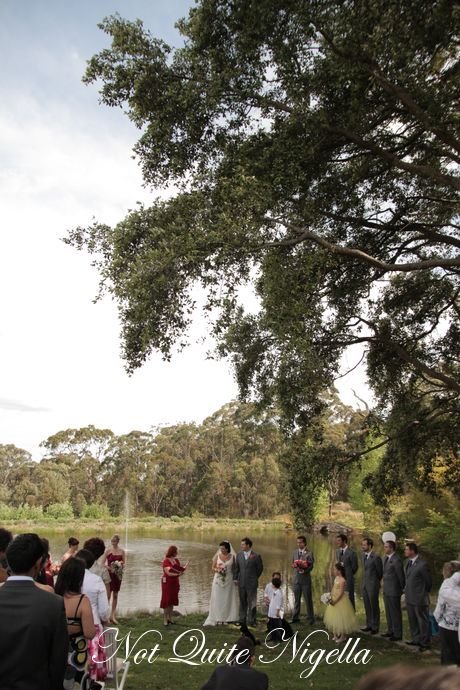 It was a stunningly beautiful wedding, although I always knew it would be. The little poochies Dash and Lucy were involved (and it's a good thing that Lucy didn't her little trick when she is excited of peeing and doing a handstand-yes really!). 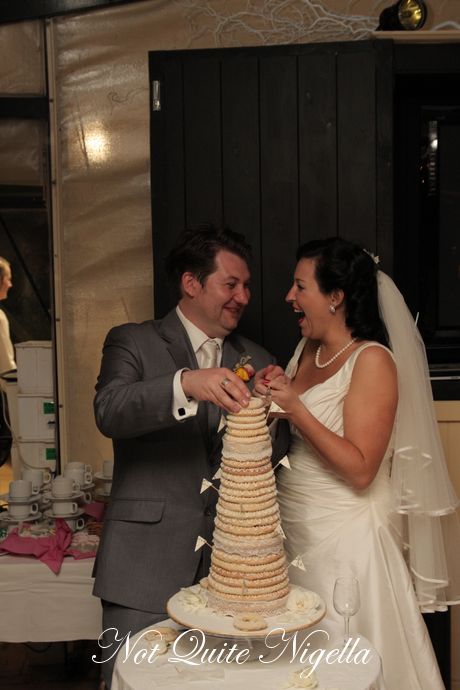 And the kak ahem... the cake? I think they really liked it! 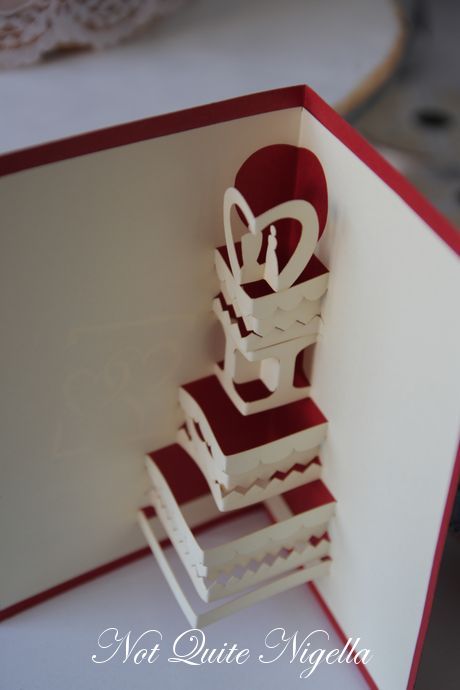 I also think that we found the perfect card from a gorgeous shop, Red Letter Day in Matakana, New Zealand. Little did I know when I purchased it in March that I would be making the cake!

So tell me Dear Reader, what is your favourite era and why?

You will also need: 1 set of Kransekake forms, a large cake board and some white fondant. If you want to paint a gold ring around the fondant then mix up a little vodka with some edible gold dust and brush it on with a small paintbrush. 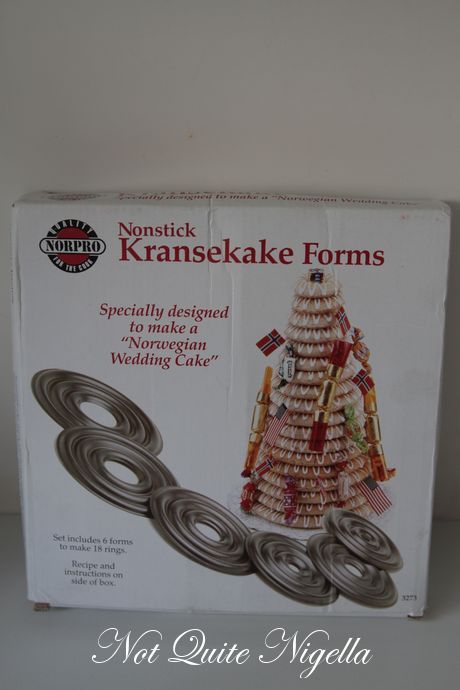 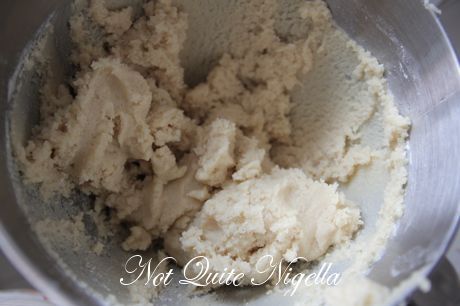 Step 1 - If you're using a standard Kitchenaid or Breville mixer, do this in two lots as the mixture is too large to do together-at least while it's first mixing up. In the large bowl of an electric mixer add the almond meal and flour and sift in the icing sugar. Add 4 of the egg whites into the mix and mix with a paddle on low speed. Add a little of the 5th egg white until you reach a moist but rollable consistency. Cover your hands lightly in flour and if the dough still sticks to them add a little more flour. Cover with cling wrap so that it doesn't dry out. 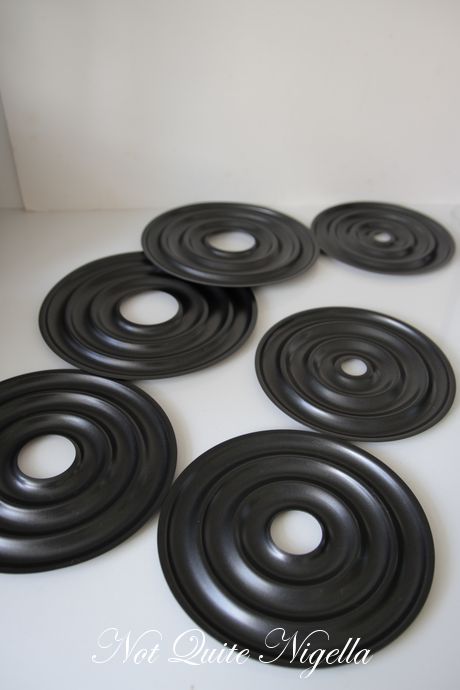 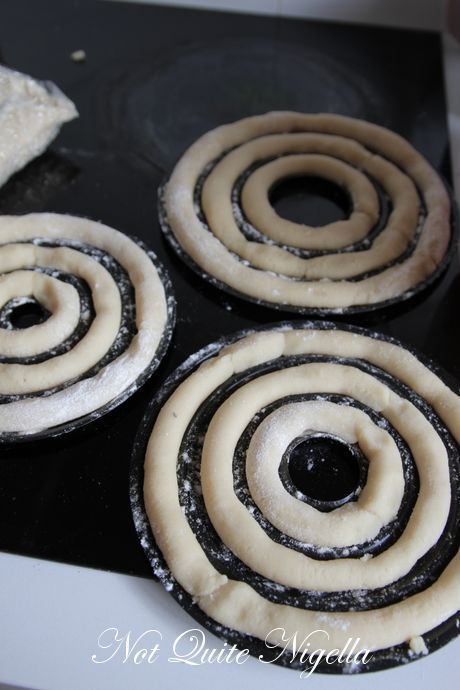 Step 2 - Preheat oven to 200C/400F. Grease each kransekake mold with oil and sift over with flour. Take a small amount of the dough and roll it out and place it in the molds, joining any joins straight away before it dries out. Don't fill too much as it will expand a little. Cover the dough in the molds with cling wrap so that it doesn't dry out. Bake in the oven for 15-20 minutes until it is a light golden shade. Cool in tin and if any are sticking together then quickly run a knife between them before they cool and harden. Remove from the tin once cooled. 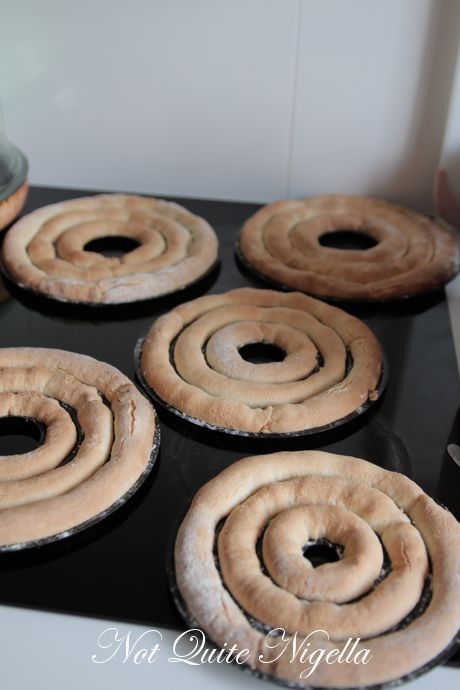 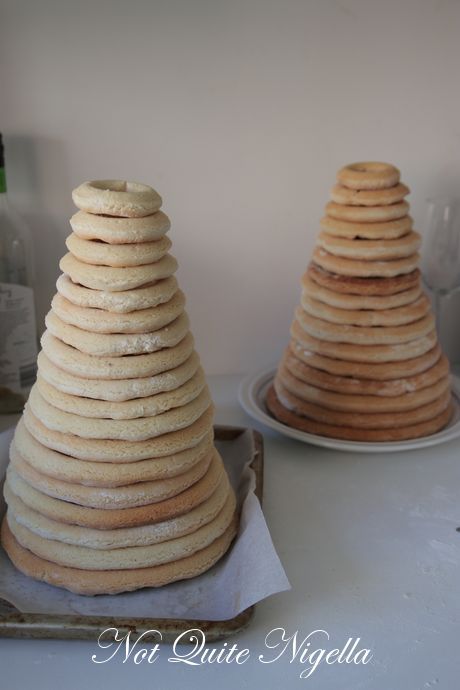 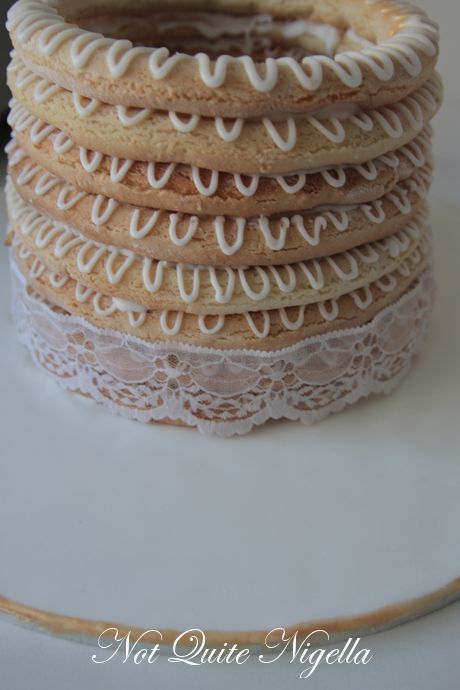 The scallop pattern on the rings

Step 3 - Sort rings into graduating shapes. Make royal icing by sifting the icing sugar in a bowl and whisking in the lemon juice and egg whites. Using a piping bag fitted with a small plain tube (I used some made of baking paper-three in total), place some royal icing on the bottom of the largest ring and adhere it to the cake board. Then with the royal icing, draw patterns on the rings as seen above. Sandwich these together with more royal icing which sets like glue (and is great for warm weather- unlike chocolate it doesn't melt). 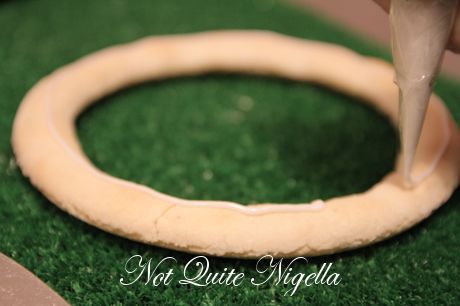 I also put some royal icing on the bottom of the ring that was to sit on top of each ring-this was only necessary as I had to transport it a distance but normally I don't think it is needed. Traditionally, it is served with Danish flags in it. To cloak the rest of the silver board in fondant, roll out 500grams/1 pound of white fondant on a lightly dusted cornflour/cornstarch surface and follow the instructions here. Use a rectangle of overhead projecter sheet to smooth out the surface and to disguise the join. 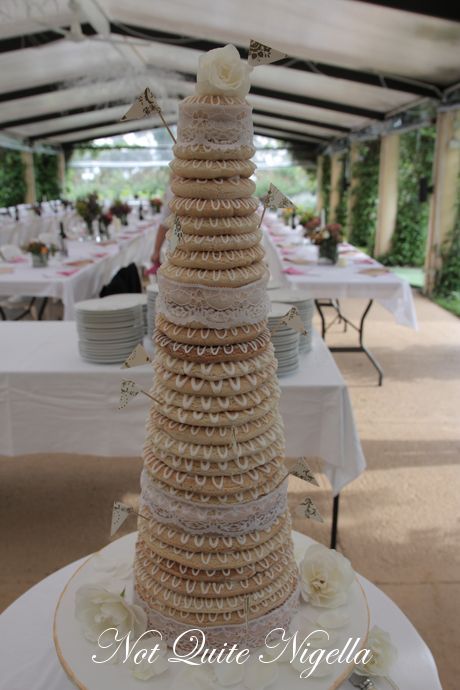 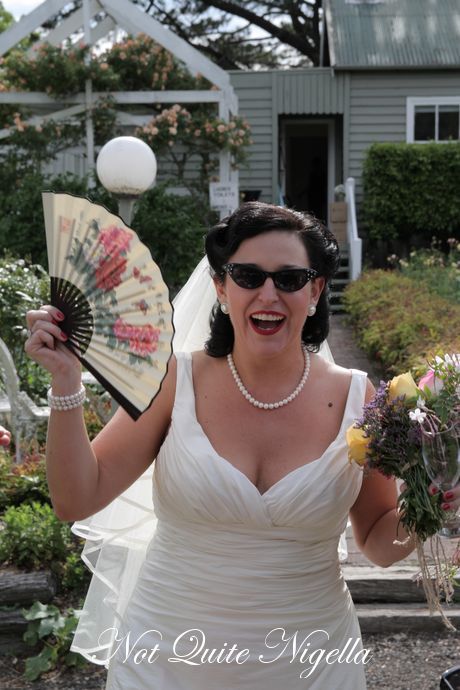