A Masterclass With Peter Gilmore & Dinner At Quay, Circular Quay 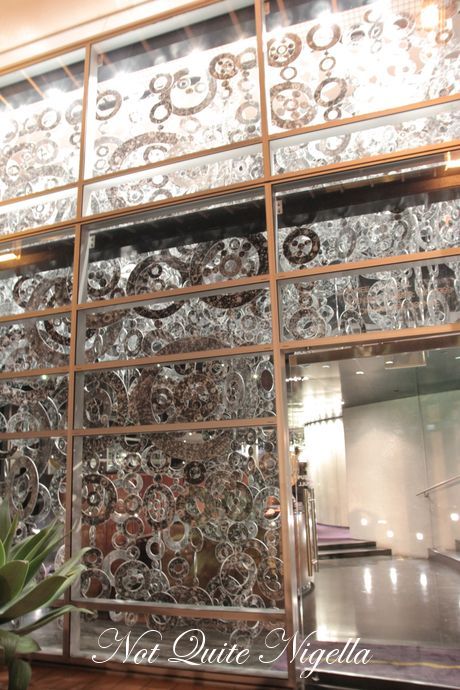 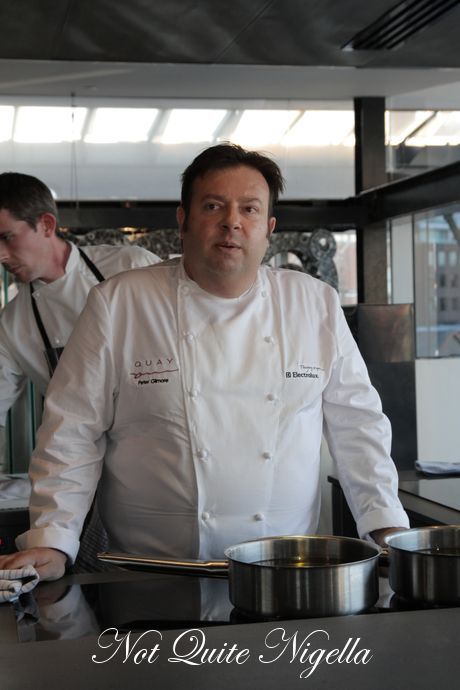 I am sitting in the Green Room of Quay and a comely dessert winks at me from a plate. A voice to my right says

"Peter Gilmore is my pimp"

The voice belongs to Quay owner John Fink. Apparently this dessert possesses magical powers and he has used it many times to charm a date. But I shan't get ahead of myself. Allow me to rewind a little.

Earlier that evening, we are seated in front of the upstairs kitchen in the Green Room of Quay restaurant, ranked #27 in the San Pellegrino World's 50 Best Restaurants list. I am a guest of Electrolux and one of a lucky bunch of people who are privy enough to attend a masterclass with Peter Gilmore. Gilmore is the new ambassador for Electrolux along with long standing ambassador Tetsuya Wakuda. The upstairs kitchen in the Green Room has been fitted out as a domestic kitchen with an Electrolux induction cooktop and steam oven. 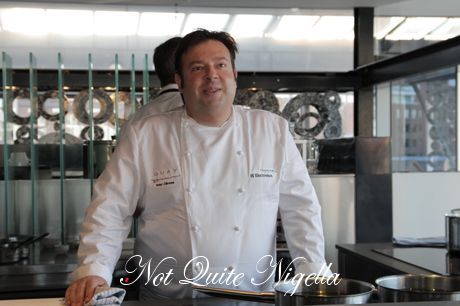 This evening we are being shown how to make a dish that will appear on an upcoming menu as well as a dish that he considers one of his signature dishes. He starts by popping a large crab claw in the steam oven which he places in a vacuum sealed bag to keep the juices in and to reduce mess. 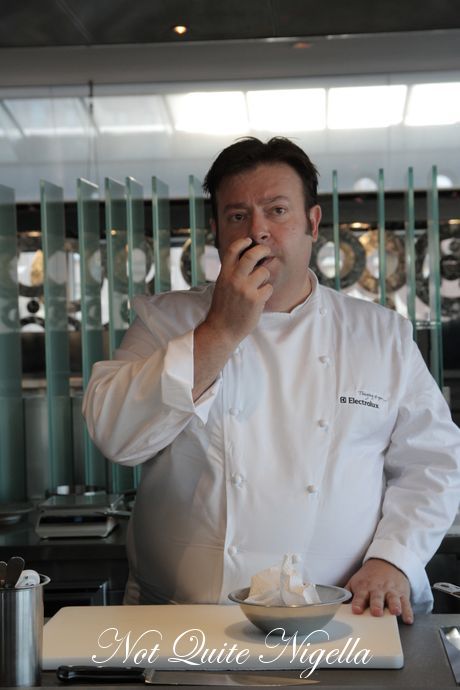 Gilmore inhales the aroma of the summer truffle

He then produces a summer truffle-these are usually thought of as lesser truffles with the winter truffles being the prize at $2,000 a kilo. The summer truffles this year though are wonderfully fragrant and much better priced at $800-$900 a kilo. He shaves it into some milk heating in a saucepan and to this he adds to some eggs to make a custard. He then takes a small round dish and pours a little in it and wraps this in some cling wrap and places this in the steam oven to steam it to a wobbly, delicate texture. 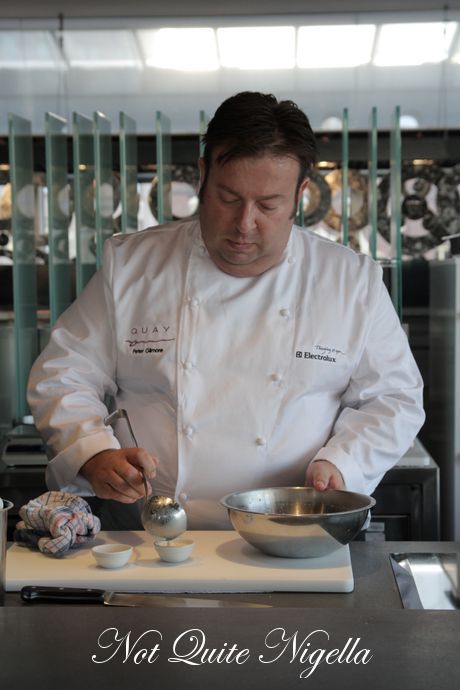 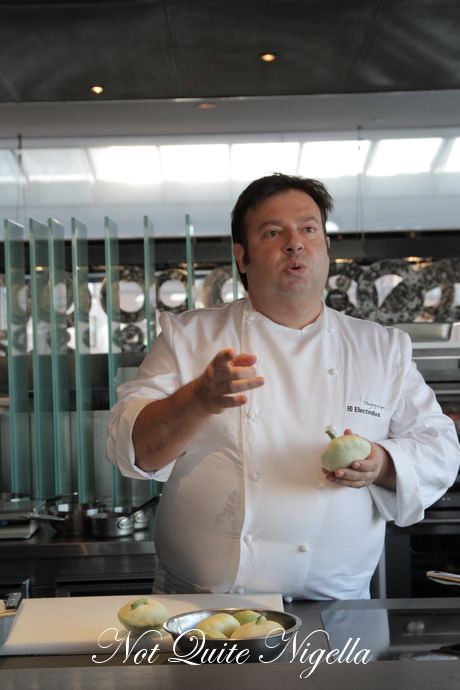 White squash grown specially for them in the Blue Mountains

Next up is some white squash. He uses a Japanese mandolin to slice the squash paper thinly and he will then briefly blanch it and brush it with oil. He tells us of how he has a farmer in the Blue Mountains that grows special produce for him. The farmer started off growing things exclusively for Quay but they became so popular they have now expanded to supply to other restaurants. Gilmore uses a fashion analogy and explains that there are some things that for the first season the farmer will grow an item exclusively for Quay but for seasons thereafter they can sell the same item to the other restaurants. 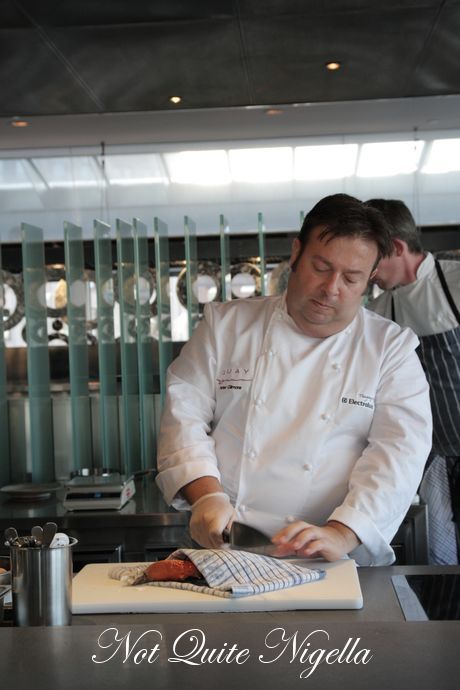 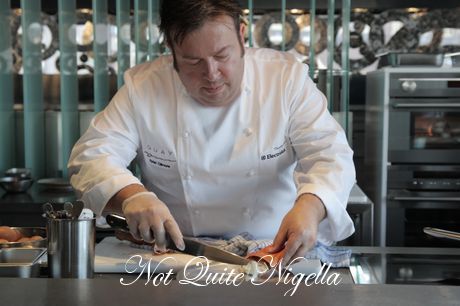 Prising out all of the meat

It's time to deal with the large crab claw. To make an amuse bouche for the crowd of seventeen of us, he wraps it in a teatowel and hits it with the knife to crack the shell. He extracts about 100grams of meat from the crab and separates it into small pieces. He separates some eggs and whisks the whites and adds these and the yolks mixed with crab to them and folds the whole mixture so that it retains the fluffiness of the whites while still combining the components. 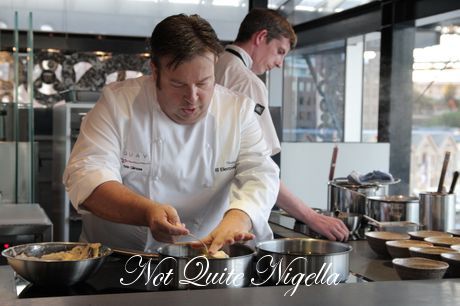 Adding the crab and egg mixture to the 100C oil

He then takes these to the induction cooktop which is set to setting 2 which takes the saucepans of oil to 100C and gently poaches them in the oil. The oil isn't crackling or sizzling and he gently turns them over to cook on the other side where they end up a pale yellow shade. 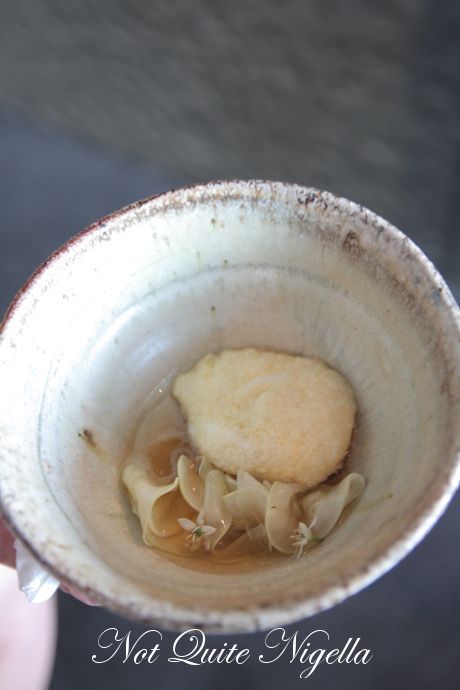 Then the enticing aroma that we've been inhaling all this time is revealed and that is the delectable crab stock which he ladles into bowls (their hand made bowls are supplied by artisans in NSW, Queensland and Victoria) along with ribbons of the barely cooked white squash and lastly our cloud puff crab meringues and we each get a bowl of this. I take the spoon delivered to me by white gloved hand and it is as light as a feather or a first kiss. It is melts in the mouth and perfectly combines with the slightly viscous crab broth and mild tasting white squash.

And if you ever wondered if a chef like this ever makes mistakes, he tells us of his first kitchen disaster where he set his kitchen alight cooking chips while his father talked on the phone. He put out the fire with a towel but not before some damage was done to the house. His father's only regret was that he hadn't left it burning for another five minutes so that the entire house could be repainted! 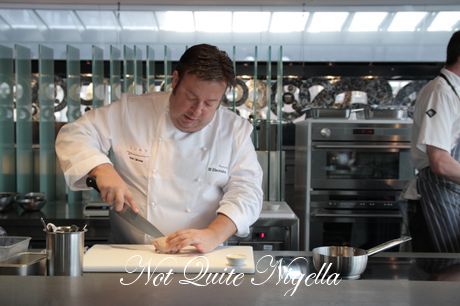 Slicing the breast from the quail

Up next is a dish that he considers one of his signature dishes, the quail. He takes out the custard from the steam oven and it is perfectly wobbly. He then takes a quail that has been partially cooked and takes off the breast with the knife and trims it. He adds the quail to a saucepan of butter set on low which will gently poach the quail.

He then shows us the other two components which are a chestnut and walnut puree as well as a pumpernickel, morel and ethical foie gras pudding. He explains that ethical foie gras comes from Spain where geese are not force fed. Instead they harvest the geese just after their natural pre winter gorge on food where they fatten themselves up naturally. He tells us that because they aren't quite as fattened up, the foie gras is not as ideal for slicing and pan frying but is good to use here. 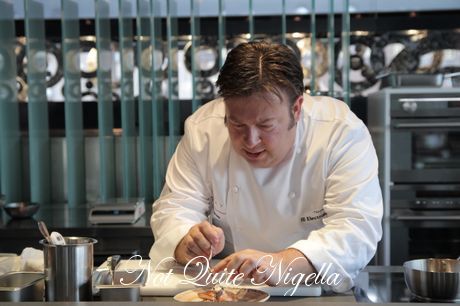 The quail done, he then glazes the quail breast with a quail stock glaze which is made up of 5 litres of quail stock reduced down to a very small saucepan full. This gives the quail gloss and colour. To the serving bowl he adds the truffle custard, chestnut and walnut puree, quinoa, puffed rice, the quail, the pumpernickel and foie gras pudding and then lastly tops it with more shavings of the truffle. He presents it to us proud as a papa to much applause telling us that we will be tasting the dish as part of our five course degustation tonight. 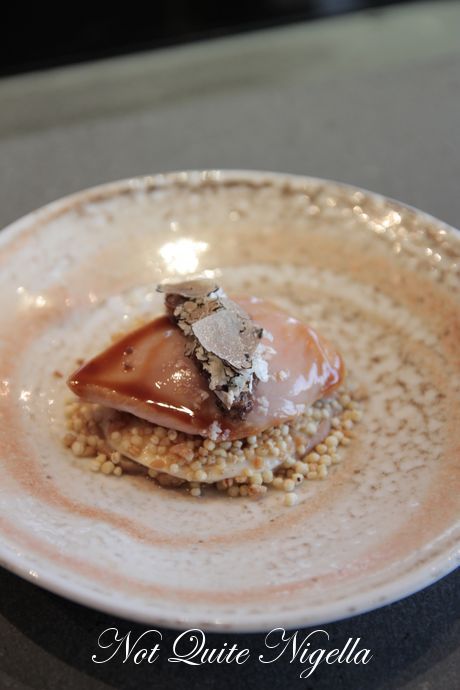 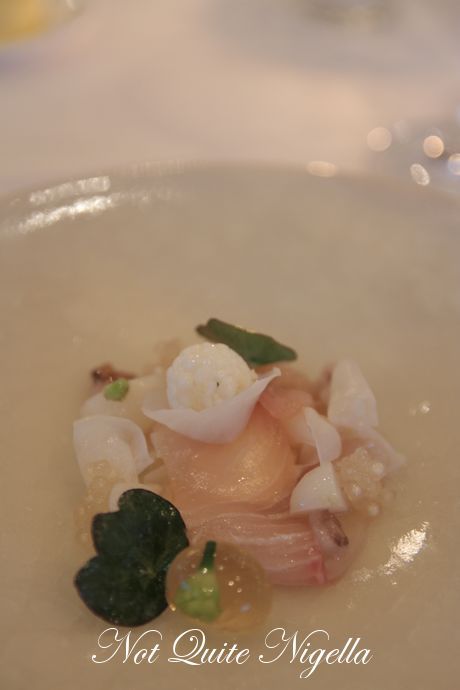 As for us, we're invited to ask him questions before we adjourn to our table to have our first dish. I must admit that I missed out on discerning most of these components as the predominant flavour of smoked eel and kingfish and pickled kohlrabi stole the show so to speak. There was a glassy jellied sphere of dashi jelly that popped with a light saltiness and the pickled kohlrabi was served as thin discs that enveloped the super finely chopped egg white pearls to appear as a flower. 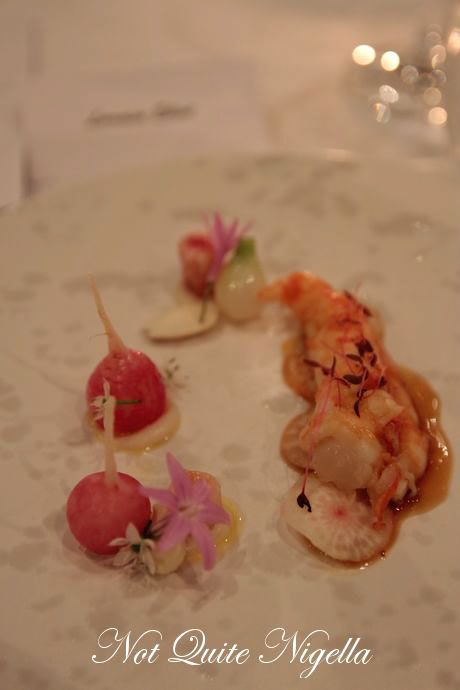 The marron is lovely and tender and is paired with an unexpected rose salt, whole baby pink turnips, some jamon de bellota cream and an olorosa (Spanish sherry) caramel which gives the whole dish a surprising but potent sweetness which juxtaposes against the lightly savoury garlic flowers. And yes I had a Pretty Woman moment when my spring onion bulb flew off my plate and onto the carpeted floor. Oops! Slippery little suckers... 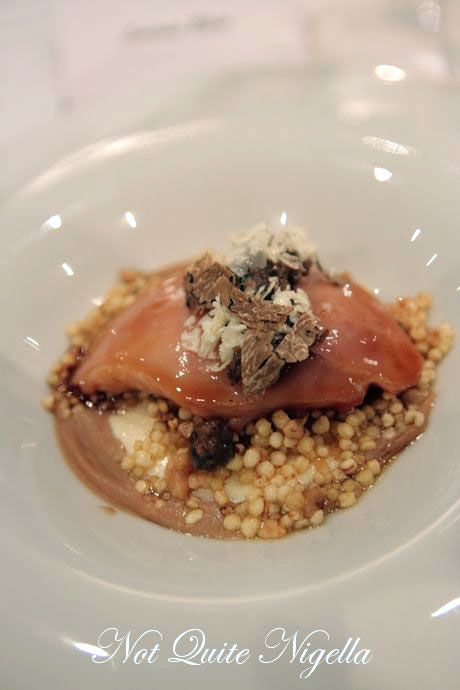 This was the dish that we had only just seen him make. I must admit that I wasn't particularly taken with the texture of the quail, it was very similar to a raw chicken breast texture which I am so used to avoiding and it is quite different to a pink centred duck breast which I am used to eating. Still the rest of the dish was good with a creaminess from the truffle custard and milk skin and  a richness and spiciness from the pumpernickel pudding. 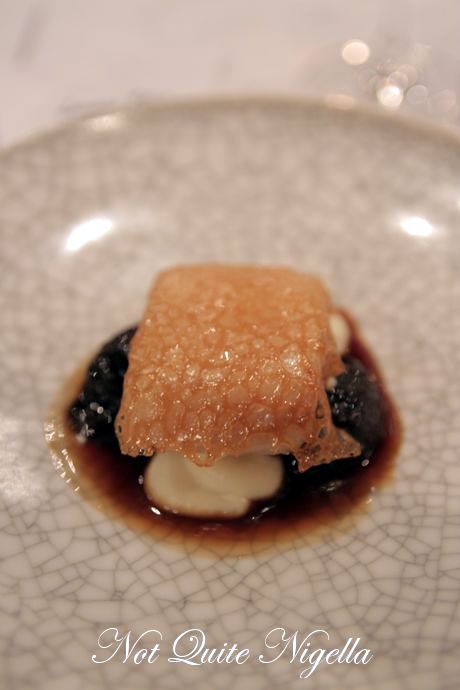 Oh my... this was very good. As soon as it was put down and we inhaled the prune kernel oil we were all united as one seventeen person entity drooling and murmuring over this dish. Peter had earlier told us that when he first made this dish he wanted to have a crackling on it but the Berkshire pig jowl has a very thick layer of fat on it in between the meat and the crackling. So he added crackling with the use of maltose sugar to simulate crispy, crunchy crackling. And we are disappointed to learn that it's not as simple as sprinkling sugar on top and then blowtorching the bugger to all hell. It's much more complex involving making the maltose toffee, crushing it up and then reassembling it. Ah well, best just eat it right? And the proof is in the eating of this dish. It is utterly wonderful. The pork jowl is buttery soft with a silky cauliflower cream, stewed whole prunes and that amazing crazy crunchy maltose crackling.

Interestingly it is paired with a wine that is a sweet wine and is a favourite of many here including me. It is made in the high altitude area of King Valley of Victoria from a winery who lost an entire vineyard of grapes in the Victorian bushfires. The winemaker William Downie decided to experiment with a new type of grape called the Petit Manseng and the result is this sweet wine that could almost double as a dessert wine although less sticky and is just made for a dish like this. 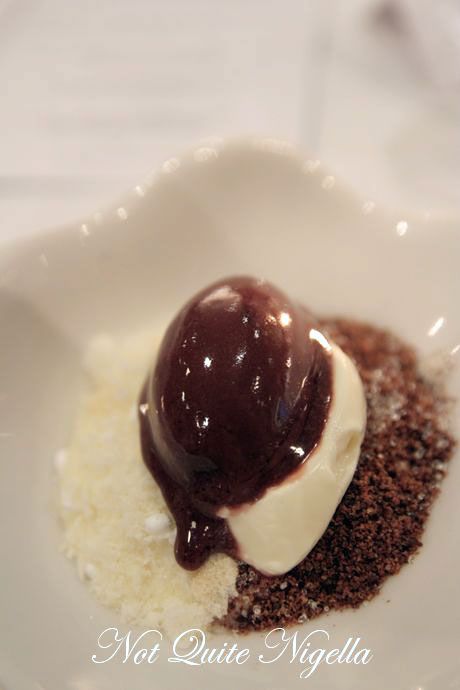 Our dessert is what had the owner John calling Peter Gilmore his pimp. Apparently his dates have all been served a dish of this and well let's just say that he considers it his primary seduction tool. Don't say you weren't warned! ;) I take a spoonful and it is sublime. I had expected a chocolate ice cream from the presentation but the technique is more airy. The chocolate crumble made of Amedei chuao (my favourite dark chocolate) is so soft and airy along with the coconut cream pudding and light coconut shavings that look like desiccated coconut but taste like coconut air. Yes it could probably remove some buttons ... 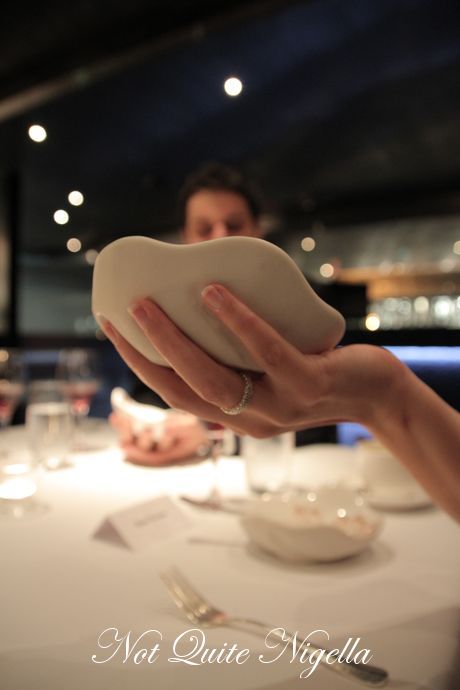 And the other surprise? The bowl which was made for them by a potter that placed her hand on the base of the bowl and slung it on her shoulder to give that distinct shape.

So tell me Dear Reader, what is the dish that would or has seduced you? 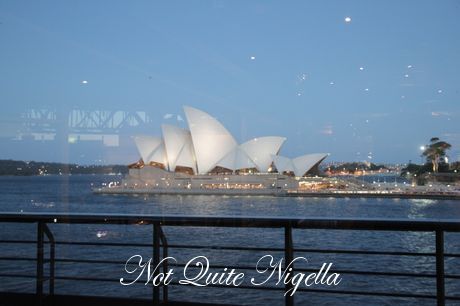 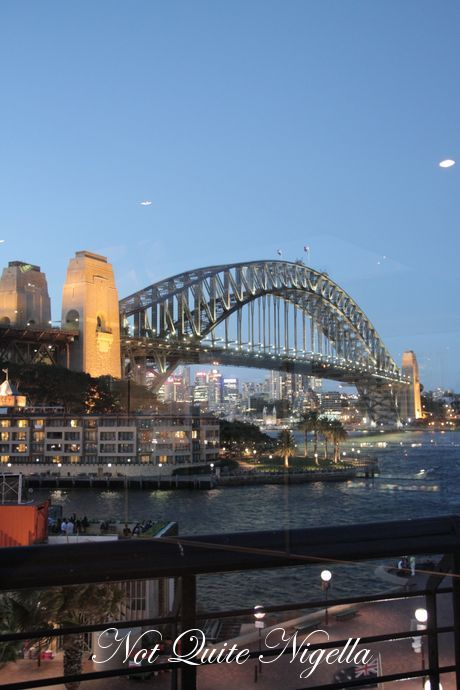