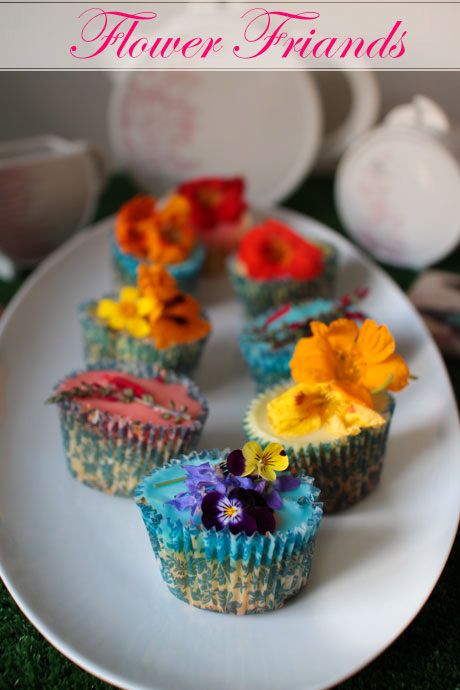 There's a well known saying from Coco Chanel that in regards to accessorising, before you leave the house you should take the last thing that you put on off. Coco Chanel was of course known for her understated elegance and much imitated distinctive style. It's great advice but as for me, you won't find me on my way out of the house taking something off. I'm more likely to be piling more on. Another bracelet, necklace or a giant hat? How about all three! And that's not even counting the fact that I wear enough makeup to power a drag queen to the moon and back. I'm more of the more is more variety than the less is more I suppose. Try as I might to be the latter. 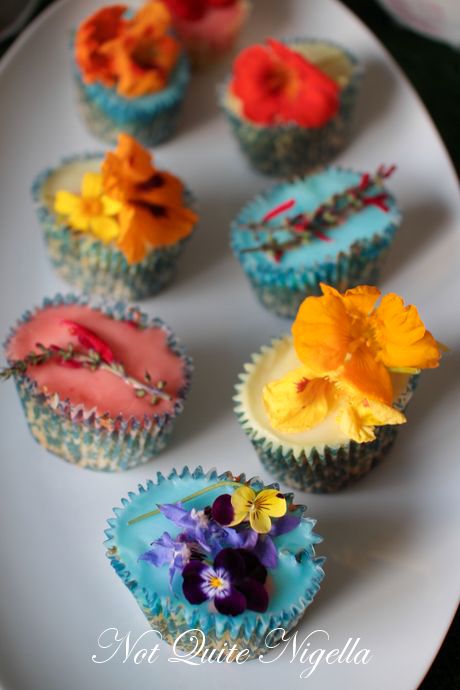 I apply the same principle to food. I love icing because it's like an extra layer of makeup. That's why muffins rarely turn up here but cupcakes with their strange and fanciful decorations are a frequent guest. I really just can't leave well enough alone and if there is a chance to put something more on, I do. I don't know if it's wise to go so overboard but I will say that it is fun and Chanel also said that it was better to be overdressed than under dressed which I wholly subscribe to. 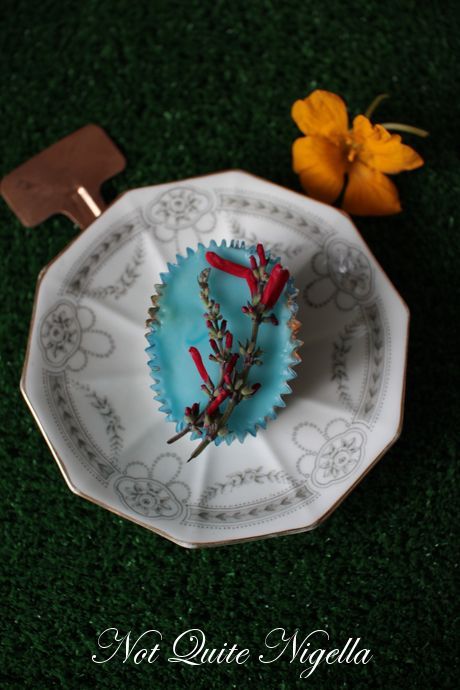 Friands enjoyed a revival several years ago and then sort of disappeared replaced by the cupcake and macaron. I always enjoyed these plain sweet and moist cakes in the distinctive oval shape. But the drag queen in me wasn't quite as taken with their plain exterior. Perhaps some icing and flowers could zjush up the plain friand? It's an idea I saw in the delicious. More Please cookbook where they added lavender icing and flowers on top of a friand. It reminded me of Nigella's Lavender trust cupcakes which were  a favourite of mine. And friands were an even more moist version of a cupcake so how could this not be a good idea? 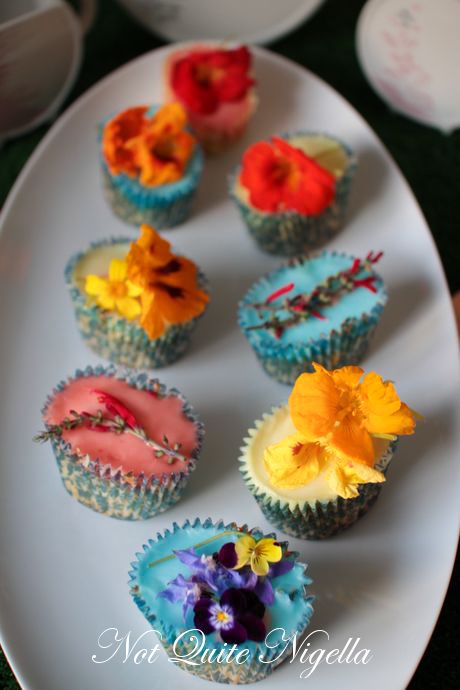 I couldn't leave the friand recipe alone too and so I added some lovely magnolia essence from iFlavour to carry through the floral theme and I bought these edible flowers from the Pyrmont Grower's Market from the Darling Mills stand (sadly there were no actual magnolia flowers in the box). They were $6 a box with plenty of pretty and colourful flowers in them. Of course I had no idea what to use them for and I just knew that I had five days in which to use them. By all means if you have unsprayed edible flowers in your garden you could always use these. And even better was the fact that it allowed me to use up five of the egg whites that I had in the fridge.The beautiful blue floral cupcake liners were a gift from my adopted mum Barbara from a couple of Christmases ago.

What were the friands like? I gave some to Mr NQN who instinctively looked wary at their sheer and utter girlyness but he sank his teeth into a friand and murmured with assured assent. "These are really good" he said before reaching for another. I gave the prettiest one in a box to Queen Viv as a mini birthday cake and she adored them too. So perhaps I haven't learned a lesson and perhaps sometimes more is more...

So tell me Dear Reader, are you a minimalist dresser or a maximalist? 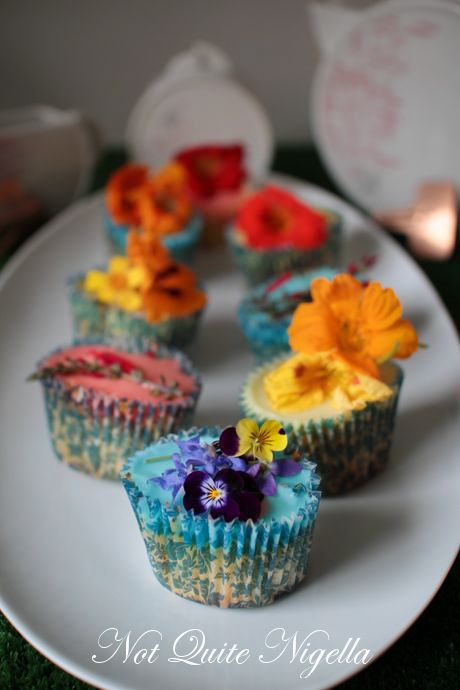 You will also need a friand tin and cupcake liners 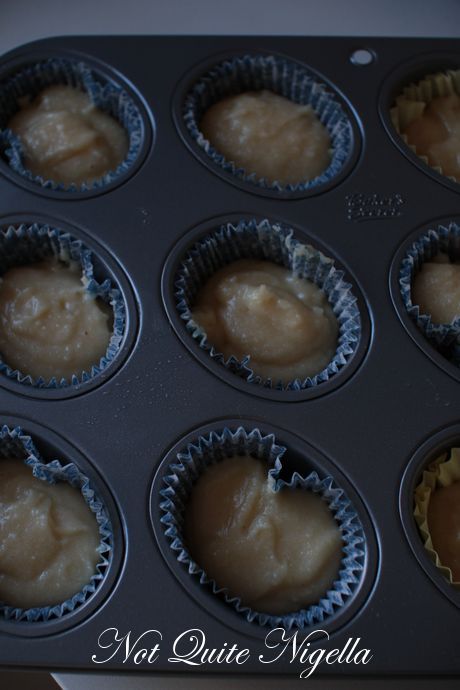 Step 1 - Line a friand tray with cupcake liners which will fit the friand trays quite nicely although you can see that there were some that rippled a little with the raw batter in them but then they were fine once baked. Preheat the oven to 180c/350F.  Place the sifted almond meal and flour in a bowl and mix thoroughly (I hate sifting so I just put the icing sugar through a small food processor, you can use it again for the icing later too). 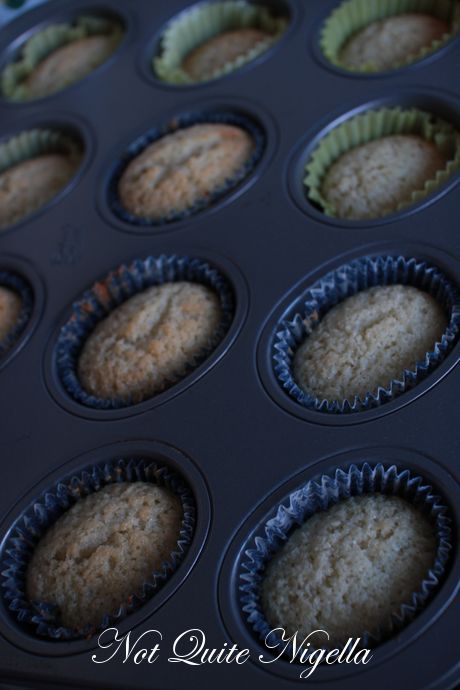 Step 2 - In a bowl or a jug using a fork beat the egg whites until frothy and then fold this into the flour mixture. Then slowly fold in the butter until combined. I found this easiest to pour into the friand tin when I pour the batter back into the jug as it is quite liquid. Bake for 20-25 minutes until light golden and a skewer inserted comes out clean. Cool in the tin. If the friands are a little too high you can trim them with a sharp knife to get a flat surface to pour the icing on. 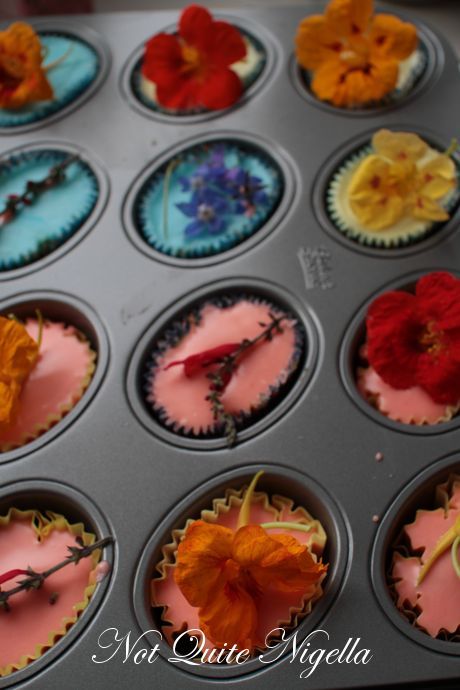 Step 3 - Sift the icing sugar again (or process again in the food processor-you can make the icing in the processor too. Just add about 3-5 tablespoons of warm water, more if necessary to achieve a liquid but viscous consistency. If you want to tint it several colour you can portion it out into bowls and tint it or you can keep them the same colour. It's up to you. Spoon a tablespoon or two of icing on top and then top with flowers and allow the icing to set fully (the icing cracks if you move these before they are set). 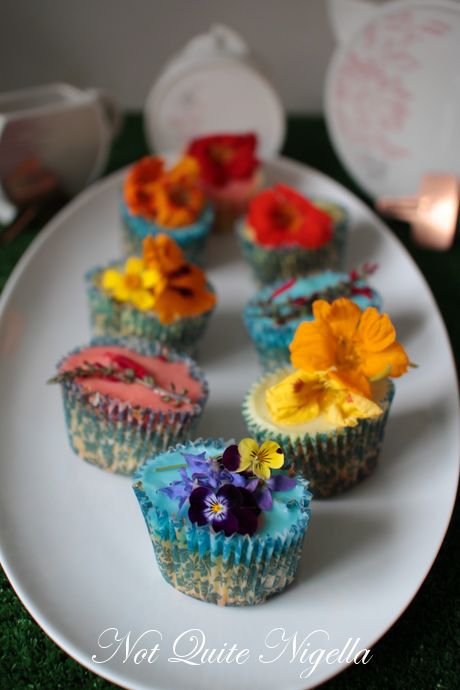