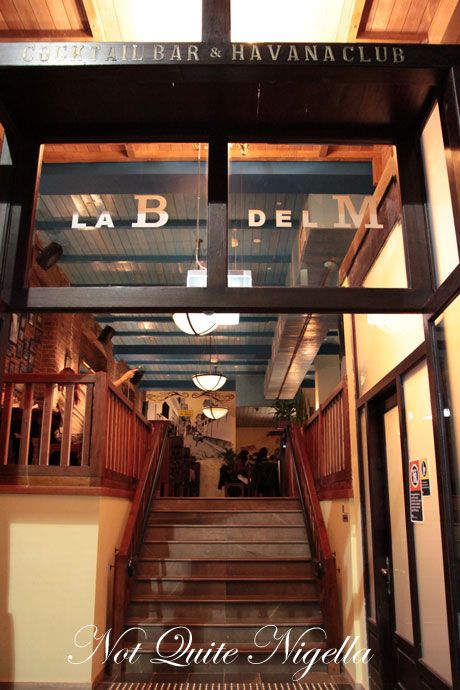 I once considered moving to Miami. The reasons will no doubt make you look at me quite strangely. You see one of my favourite television shows Dexter is set there and I told Mr NQN that we needed to move there so that I could work at the Miami Dade Police station and help Dexter and Deb with catching criminals. "But they aren't real mon cheri" he told me patiently. "Yes but have you seen the Cuban sandwiches that they have for lunch? _They _are real!" I exclaimed excitedly. 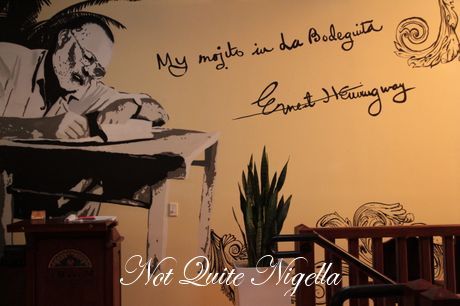 So when I was asked where I would like to go for my birthday with my two friends Gina and Teena it was this Cuban influenced restaurant. Cuban food? Yes that's enough reason to want to visit as we don't seem to have much of it on offer here in Sydney. It's a Friday night and we make our way there. Just opposite the Queen Victoria Building the building is enormous and makes us ponder what used to be there (apparently an unmemorable computer store). Three months of construction on the heritage listed building later and it's now a thriving, buzzing place. "How did everyone find out about it?" Gina asks looking around at the packed in crowds. 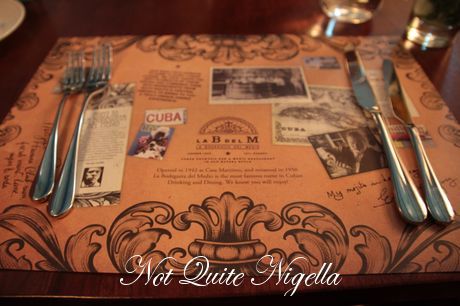 The left entrance is the restaurant and the right restaurant gets you into the upstairs and downstairs bar area where there is a live Cuban band leader Armandito and his band Trovason playing seven nights a week. Perhaps it's the night, it's an after work crowd after all and the atmosphere reminds us of the Bavarian Bier Cafe. The cocktail menu has some interesting specimens such as Cuban President, the Hemmingway Special, Canchánchara and Mary Pickford. 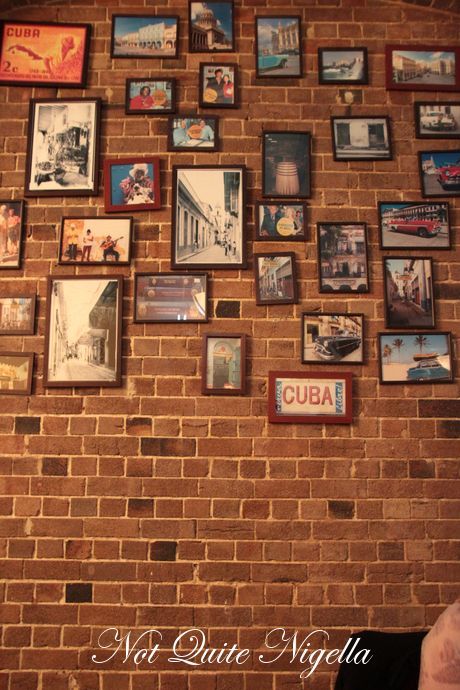 La Bodeguita Del Medio or LBDM is a chain of Cuban restaurants that have branches throughout the world inclduing Mexico, US, Ukraine, Czech Republic, Slovakia, Venezuela, Germany, England and Argentina among others. One of the main drawcards is that the legendary writer Ernest Hemmingway used to drink mojitos in the original Havana location along with Salvador Allende and Pablo Neruda. In fact Hemmingway so famously dedicated a scrawl on the wall saying "My mojito in La Bodeguita, My daiquiri in El Floridita" and an imprint of the writer and his scrawl features on a wall here. Other scrawlings from customers litter the walls along with photographs. 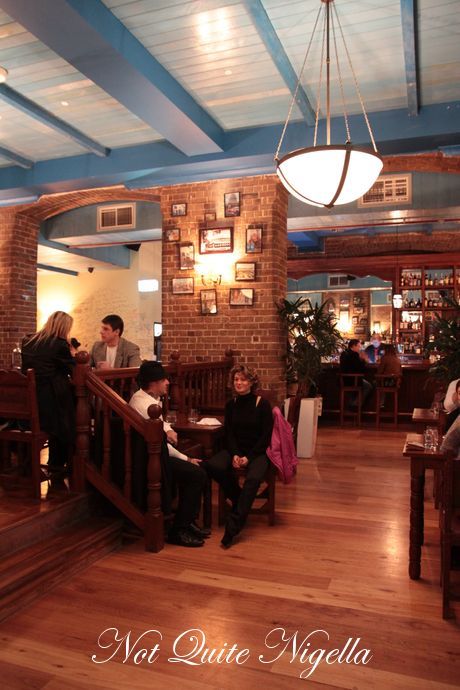 We are all quite curious about Cuban food so we ask what is good and Cuban on the menu. They hesitate and explain that the menu is more South American with Cuban influences and recommend their steaks and a few items. We try these although I was hoping for more Cuban items and we imagine being an island and having no imports must have an impact on the cuisine. 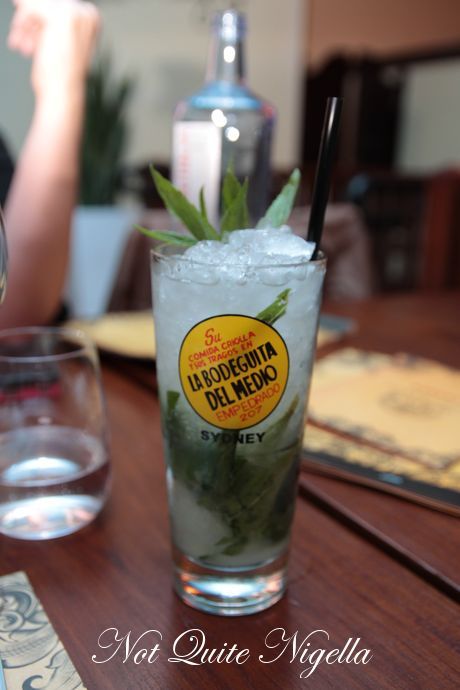 It seems silly to go to a place where a famous writer has written about one of their drinks and not try it so we try their mojito. It comes out with requisite greenery intact and we all agree that at $10 it is a very decent price for a cocktail. We ask for Gina's verdict as she is a Canadian and Cuba is to a Candian what Bali is to an Australian as a holiday destination. It has the lime and mint although Teena finds that it needs more rum while Gina finds that it needs more sugar syrup. 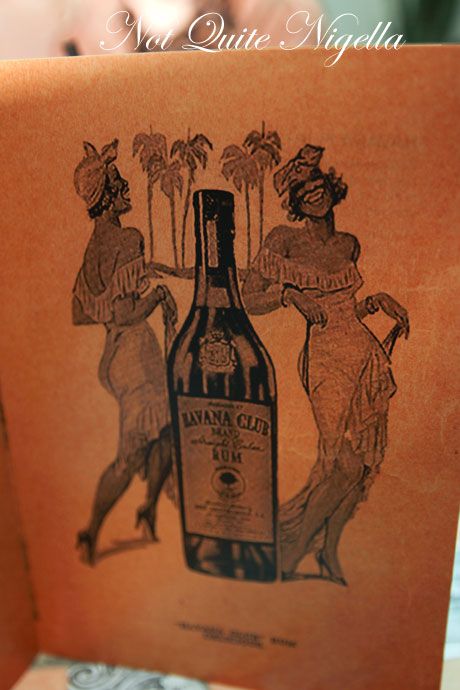 There is also debate about the type of sugar used (we later learn that it is caster which is what they use in their Cuban branch) and Gina prefers it with sugar cane juice and whether the lime is muddled enough. The mojito should have a good balance of sweetness and refreshment but I do find the sweetness and the lime lacking so that they're not quite balanced. 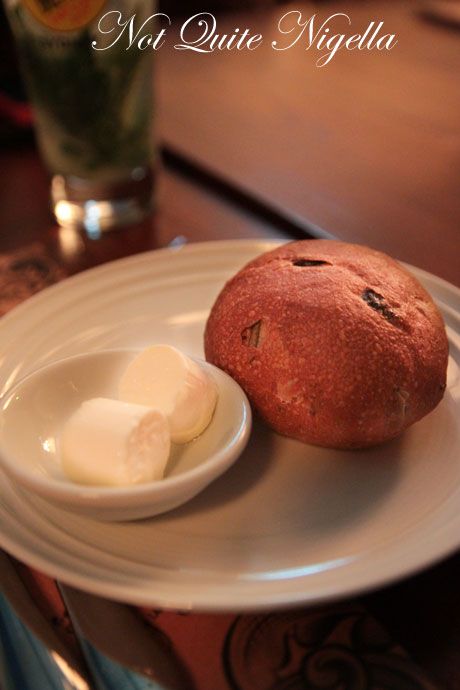 The sourdough bread is served warm and the pick out of the whole wheat and the olive is the olive. 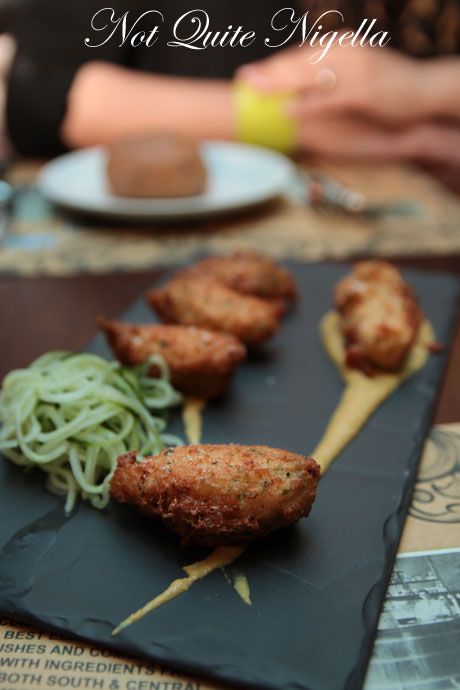 I don't think you'll find a croquette hater amongst the three of us and the taro croquettes served with a spicy mayonnaise type dressing are a hit. They're hot and crunchy with a soft, moreish filling and they come paired with a refreshing pickled cucumber noodle salad for respite should the aji chilli sauce, which is like a spicy mayonnaise, become too spicy. 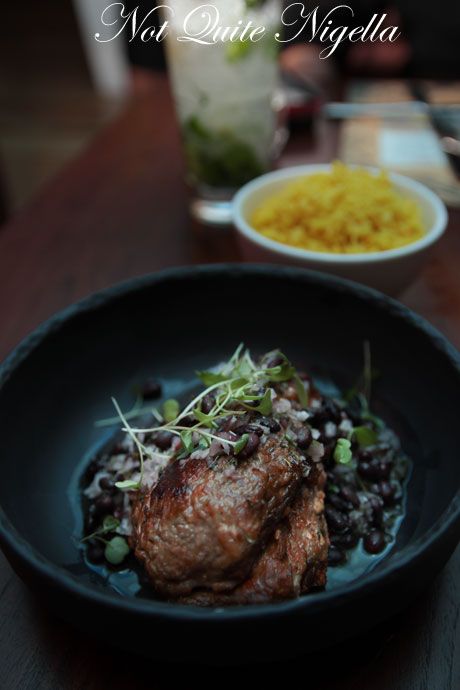 I was determined to have something Cuban and this dish fit the bill. It is also a very generous size and more a main size than an entree size. The lamb neck is gorgeously soft and is paired with tangy black bean vinaigrette flavoured with garlic, onion and thyme and paired with a saffron Cuban rice. Although slightly underseasoned this is my favourite entree and keeps me going back for more. 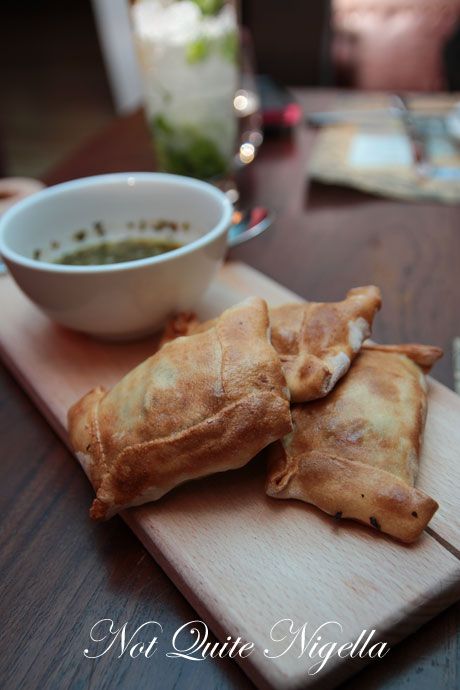 The empanadas are filled with slow braised rabbit and a tomato salsa which is different from Mexican salsa. The salsa is clear with herbs and diced tomato. The empanadas are encased in a thin pastry and we note that the white rabbit meat isn't very discernible as rabbit and it is a touch watery. 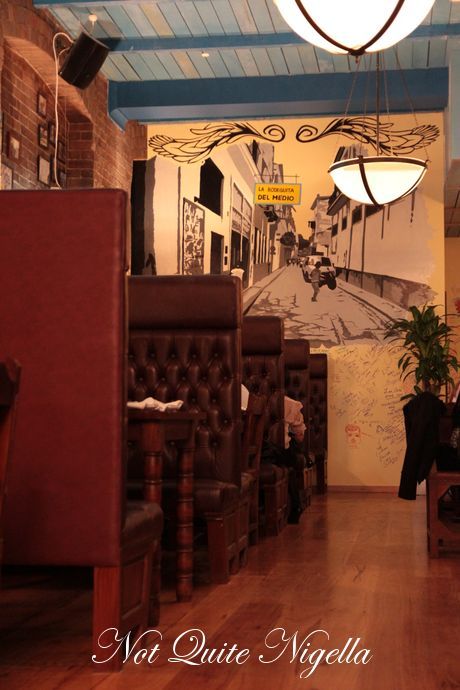 There's a little break between the entrees and mains. I take a look at the bathroom which gets me all kinds of confused as I see a hand drawn sign that says "Mens" but it actually says that it's the ladies too in a hand drawn scrawl. The two doors to enter the bathroom aren't quite wide enough and I find myself trapped between the two momentarily before I enter the unisex bathrooms (these kinds of things always happen to me). On the way back to the table I spot a room which is full of lockers. These are rum lockers which will hold bottles of rum for members so that they can drink from them whenever they visit. 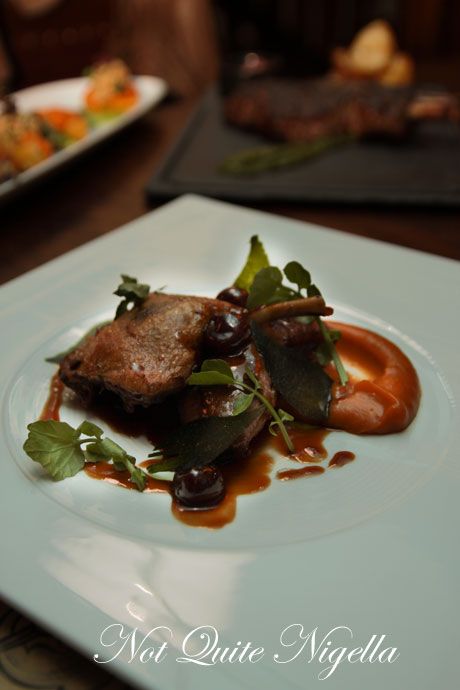 Our mains have arrived and we were recommended the duck with chocolate sauce. We've all had chicken with chocolate mole sauce but it is quite different from the mole sauces that we've tried. This one resembles a glossy jus and is light in chocolate but it is certainly present.  The sweetness is further emphasised with the sweet potato puree which is heady in cinnamon and the duck is fatty and juicy. 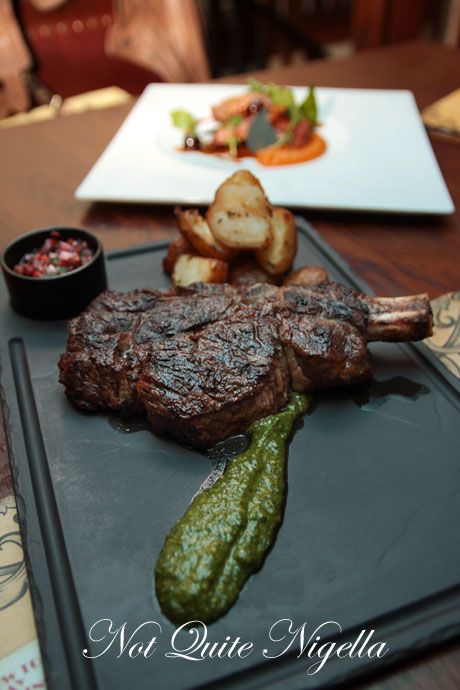 Service throughout the night has been sweet and friendly but a bit absent minded. A request for share plates and steak knives is met with a friendly smile but they never appear so we figure we will take our chances on the steak and try cutting it with our regular knives. It slices like butter and is wonderfully tender. It comes with a Cuban mustard and a red wine sauce which reminds us of a pesto or herby mustard with the distinctive mustardy kick to it. It also comes with a piquant tomato salsa sauce. There is a serving of roast potatoes strong in garlic and rosemary that aren't quite crispy although they are a good pairing with the enormous steak. 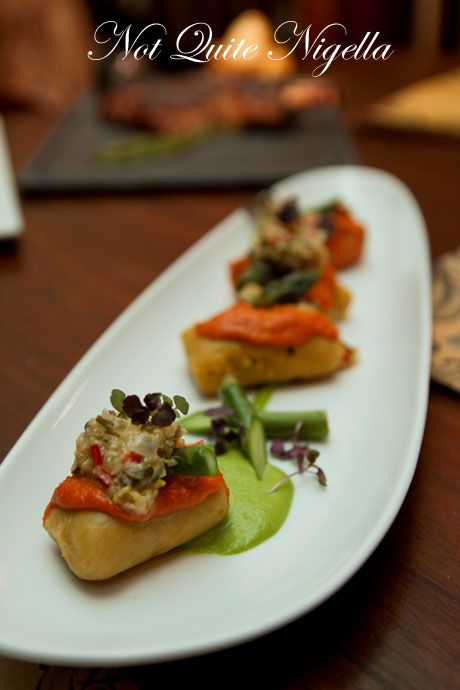 The tamales actually look more like an entree than a main and we remark that if you had ordered that and seen the size of the steak or other mains you might feel a bit left out. The tamales are thick and a bit stodgy in a similar way that cornbread (both use maize or masa as the main ingredient) are. We've had them previously stuffed with a filling and wrapped in corn husks but here they are presented out of the husk and with they are topped with spring onions, goat's cheese and one of the tamales rests on a pea puree with asparagus which helps to lighten the cornmeal. 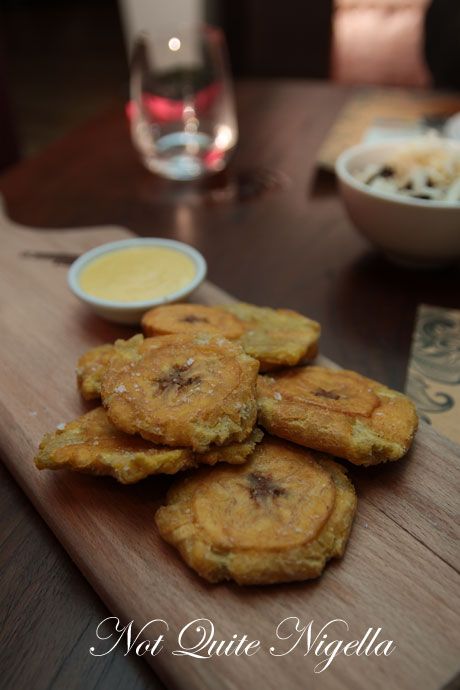 I wasn't sure what these would be like and they come as slices of plantain banana dipped in batter and deep fried. They are a bit dry and none of us go for a second fritter. I preferred the plantain fritters without the batter at Jazz City Diner which were crunchy and moreish (and apparently the plátanos fritos are served mostly without the batter in Cuba). 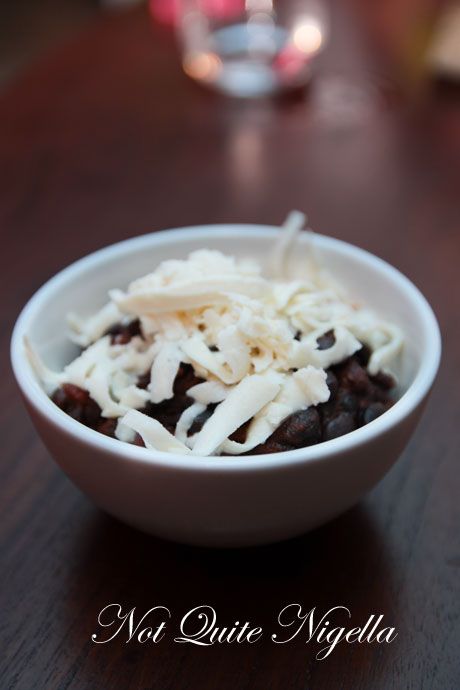 No such fate for the modest bowl of black beans covered in shredded cheese queso fresco (similar to Spain's queso blanco). In fact the bowl is scraped clean as the beans are full of flavour and I marvel at the queso fresco cheese which softens but never quite melts. 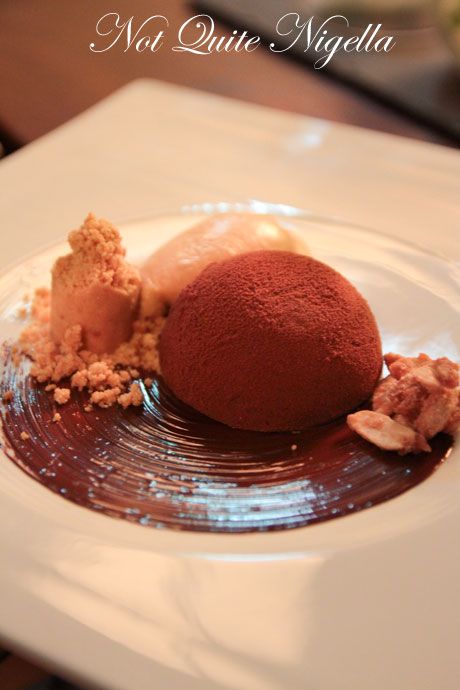 We end up waiting quite a while for the plates to be cleared which gives us plenty of time to contemplate the dessert menu. We had just enough room for dessert-and this one caught all of our eyes as we're all avowed Reese's Peanut Butter cup lovers. The mocha dome is rich, and probably best shared as it is quite a generous portion. It is paired with a cylinder of delicious peanut powder compressed together (similar to the Glory brand of Chinese ground peanut cookies) and toasted candied peanuts as well as a moreish salted caramel ice cream. Not only did it win our hearts but it was very prettily presented. 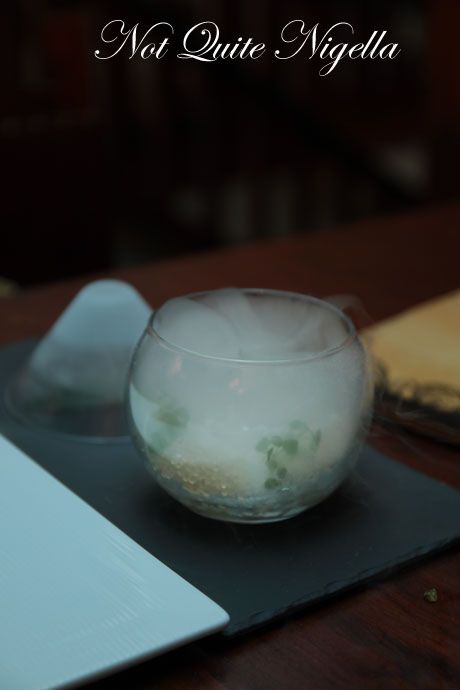 The dessert that they really suggested that we try is a bit of showmanship at the table. They bring a black slate plate to us and then remove and upturn the top and a cloud of dry ice wafts out. Once this disappears there is an interesting concoction inside... 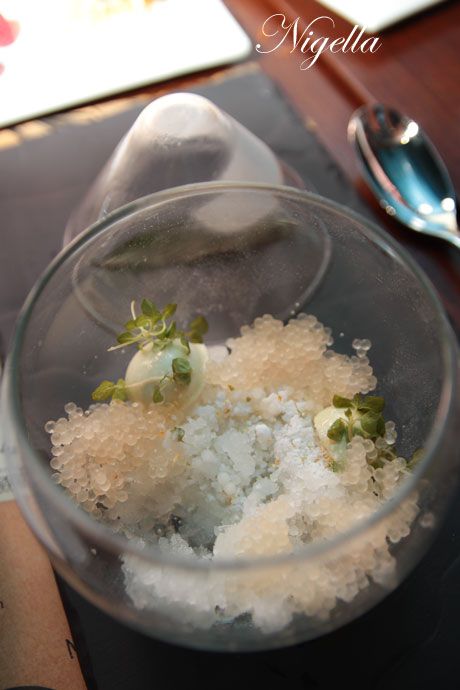 Inside the glass bowl

Inside there are three little half orbs of creamy mint custard with the texture of panna cotta as well as lime granita, mint, rum, sherbert and tiny rum caviar balls which are made using algin and calcic. The whole dessert is tantalisingly refreshing and well balanced in the way that we wanted the actual Mojito cocktails to be and we can imagine this being a hit during Summer. 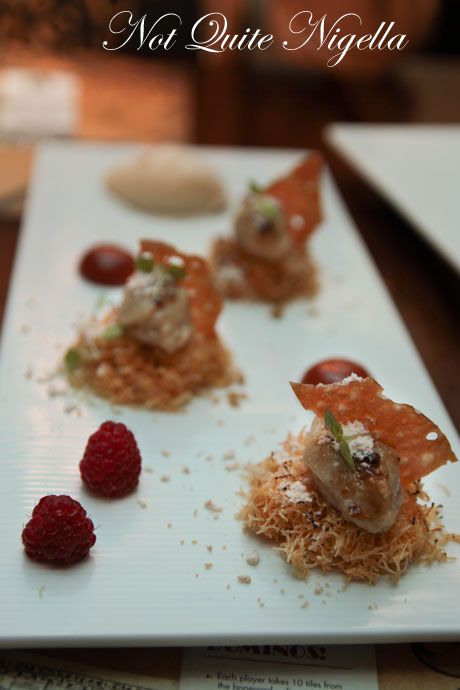 Again this looked nothing like what we expected. There are three nests of what look to be vermicelli but they taste buttery like a finely shredded kaitifi filo pastry and on top of each nest is a slice of slowly cooked banana, some dulce de leche caramel and on the side are dots of a sweet, thick guava paste and a scoop of cinnamon ice cream and shards of crispy toffee. It's not bad although it's nothing what we expected which was more a pudding type of dessert. 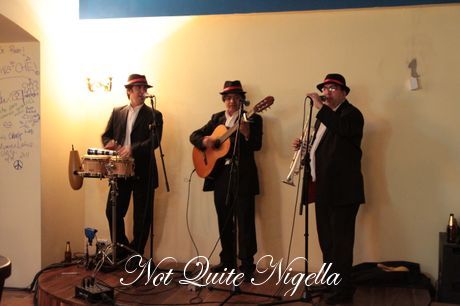 We have a little time so we slip downstairs where the after work Friday night crowd has cleared. There's a table of people taking photos of the "Please do not write on the walls" handwritten sign and the band strikes up a tune. We may have just gotten a little closer to Cuba!

So tell me Dear Reader, have you ever tried much Cuban food? And have you ever wanted to visit a city because of a TV show or movie?

Under 18's are welcome until 4pm