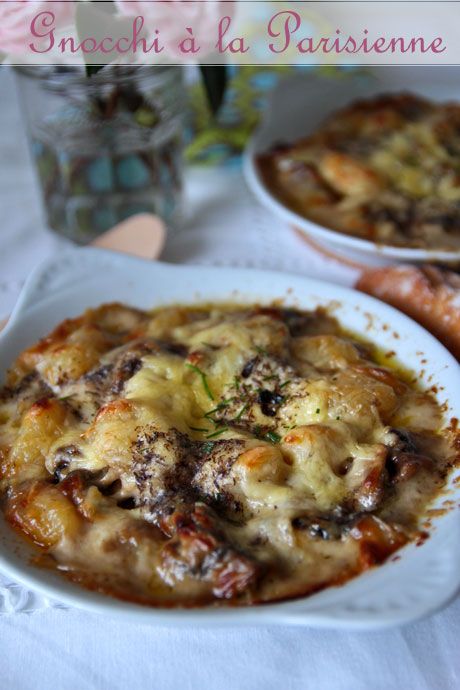 It was a week unlike a typical one. I tell people that despite my job, I try not to go out every single night. Yet this week would prove me wrong and because I was about to embark on some travel, I wanted to catch up with friends. And because they were girlfriends and it was a week of torrential downpours, Mr NQN quite wisely opted to stay at home and play on his computer and watch the Tour de France. I left him provisions to eat including a duck and vegetable broth and a gnocchi a la Parisienne as I know that he loves pasta with creamy sauces.

Gnocchi a la Parisienne is a toothsome mix of gnocchi pillows baked in a creamy roux sauce with garlic mushrooms. I topped it with cheese and slices of truffle butter-the fresh truffle that we were given at Chateau Yering. It was a heady, fragrant comforting mix - if you were to describe it like a person it would be kind of like your down to earth but sophisticated friend. 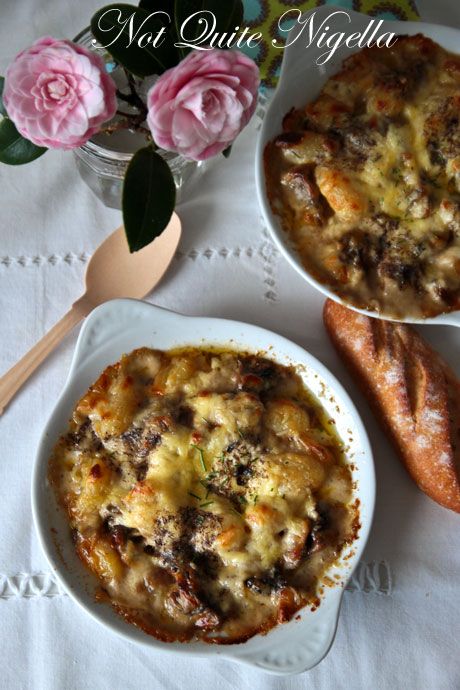 The broth came from a larger container in the fridge and it was solid-jellied to be exact. You see I had made the stock in the pressure cooker and because the gelatine was released from the bones it became quite jellied when cold. When I put some in a bowl that afternoon I expected him to heat it up and drink it like a soup. I left instructions on the cooking time and thought that he would be fine.

Later that night I asked him if he enjoyed his dinner.

"Yeah the bake stuff was really good but that jelly stuff was weird" he said shaking his head.

"What jelly stuff?" I asked him. And then it dawned on me. The poor thing had eaten a bowlful of the cold, solid jellied broth. I burst out laughing and said "That was the soup, you didn't heat it up?" 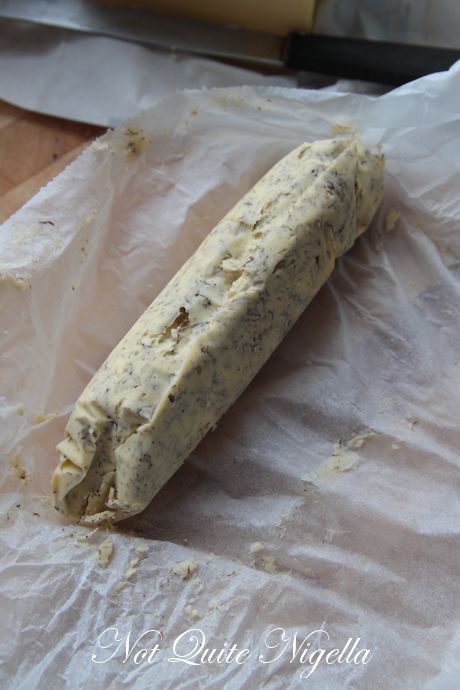 He looked at me surprised. "Whaaa? No...." with a confused tone before musing aloud. "I thought it was kinda weird for jelly and not sweet". He then paused and added with a wry grin "Uh oh this is going to make it on the blog isn't it?"

Yes my darling husband it is :)

So tell me Dear Reader, how much do you go out in a typical week and how often would you eat out at a restaurant or cafe? And bloggers, do your friends or relatives ever ask you not to put something about them on your blog? ;) 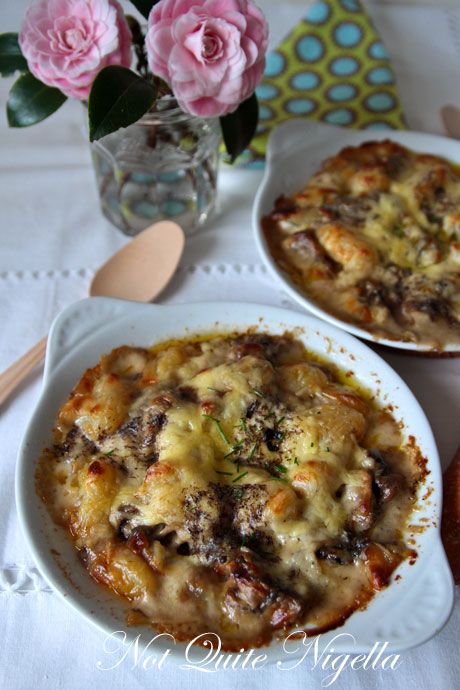 Step 1 - Boil the gnocchi in plenty of salted water until they float to the top. Preheat the oven to 190C/380F. 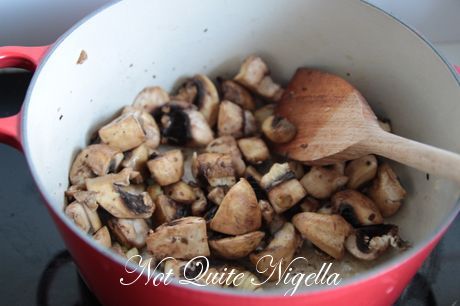 Step 2 - Heat the saucepan (I just use the same cast iron pot I used to boil the gnocchi). Melt a tablespoon of butter and then saute the garlic and mushrooms on medium heat. I find it easier to keep adding butter as they cook or they tend to absorb all of the butter at once and start to stick. So add a tablespoon of butter at a time as they cook, there should be enough for 3-4 tablespoons  and you will only use half of the total butter for this step. Place in a bowl and set aside. 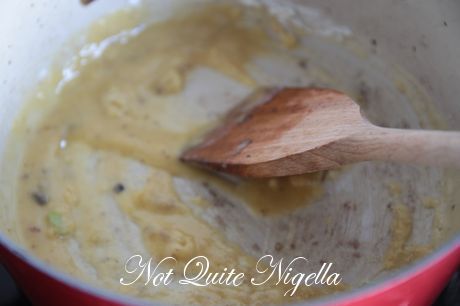 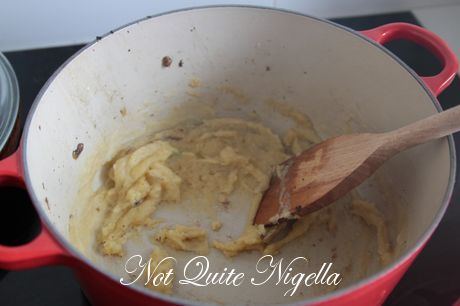 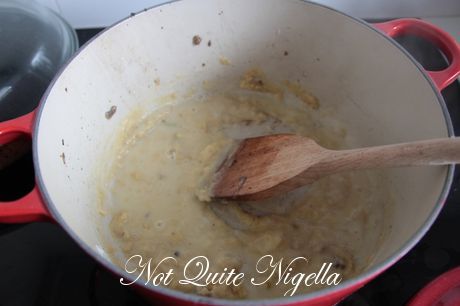 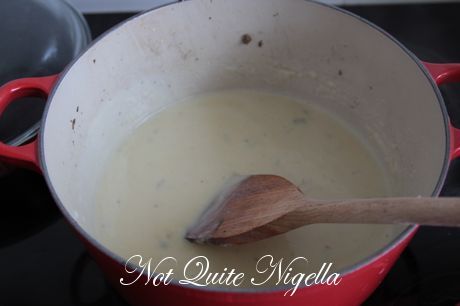 To get a creamy smooth roux sauce

Step 3 - With the second half of butter (50g/1.7ozs) make a roux sauce by melting the butter in the same saucepan and then add the flour. Using a flat bottomed wooden spoon or spatula move the flour around the avoid any lumps and cook it for 1-2 minutes until it bubbles lightly. Add the white wine and cook this for another 2-3 minutes. Then add milk gradually, in 3-4 parts combining well and stirring it and then adding the cheese. I find this easiest to do with the pot off the heat and once it is all smooth put the pot back on the heat to cook it. Add the gnocchi and mushrooms and stir to coat. 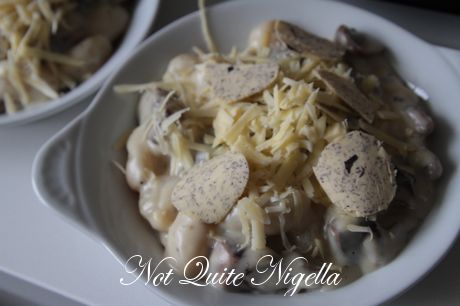 Step 4 - Ladle the mixture into the gratin dishes. Add some extra cheese on top and then top with extra butter (the 20g extra, I used truffle butter). Bake for 20 minutes until golden brown and bubbly. Serve with chopped fresh chives or parsley on top. 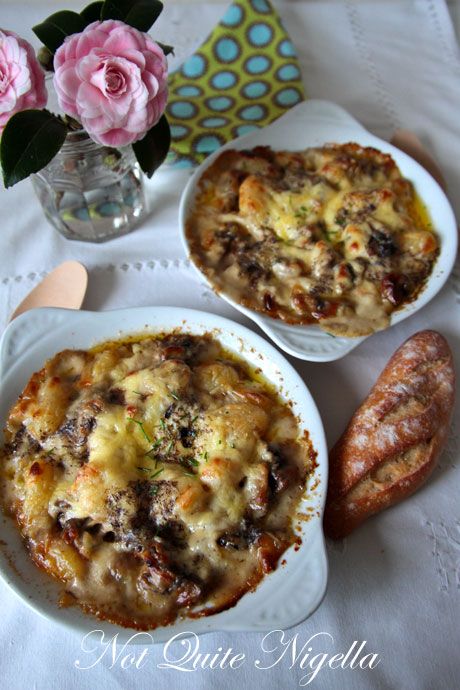