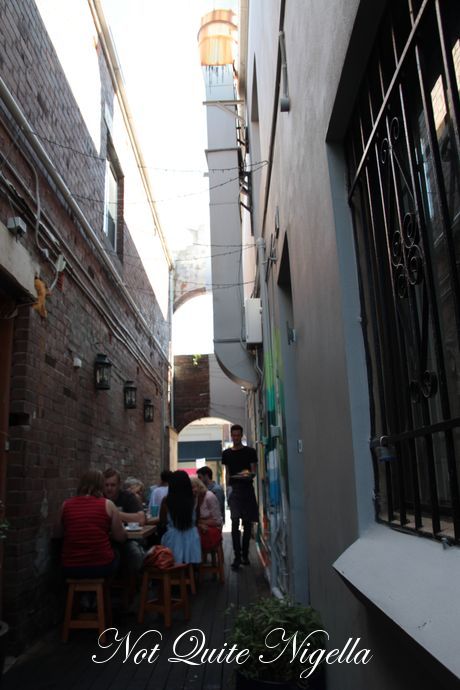 Jade Jagger once called herself "a pathetic aesthete." She was using the term to apply to her policy of only hiring good looking sales staff and was famously quoted by London Express as saying "I just can't really understand people who have ugly people working for them. I really can't. Just call me a pathetic aesthete."

_cough_ Oh dear, although I suppose you can say those things when your dad is Mick Jagger and your mum is Bianca Jagger.

But when I look around at Three Blue Ducks, it seems like Ms Jagger has had a hand with their hiring. Of course I'm joking, the staff here just happen to be without exception extremely comely  but one thing that Ms Jagger forgot to mention when hiring people is that it's good to hire people that are friendly and it seems every staff member we encounter at Three Blue Ducks is friendly as well as being pretty. 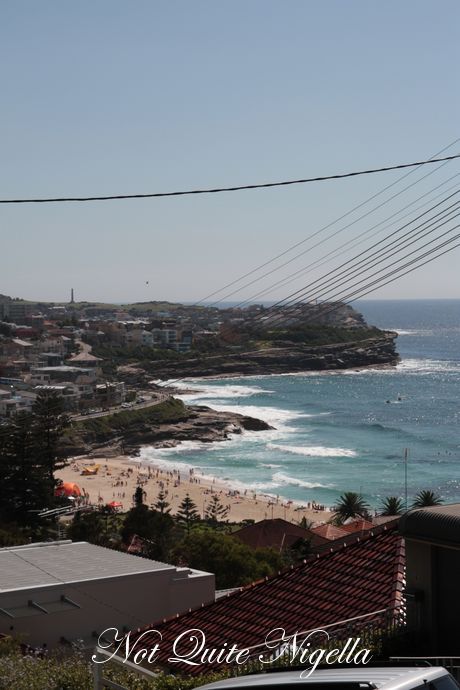 I was recommended Three Blue Ducks by my wonderful hairdresser Elly at Stevie English Hair. She lives nearby and she reported that "there's always a queue outside." The cafe has become so popular that it has taken up the premises alongside the original cafe and laneway. Why the mass love? Well one the chefs there Mark was formerly of Tetsuya's and he and his surfing pals (the other ducks Sam and Chris) bonded through their mutual love of surfing. 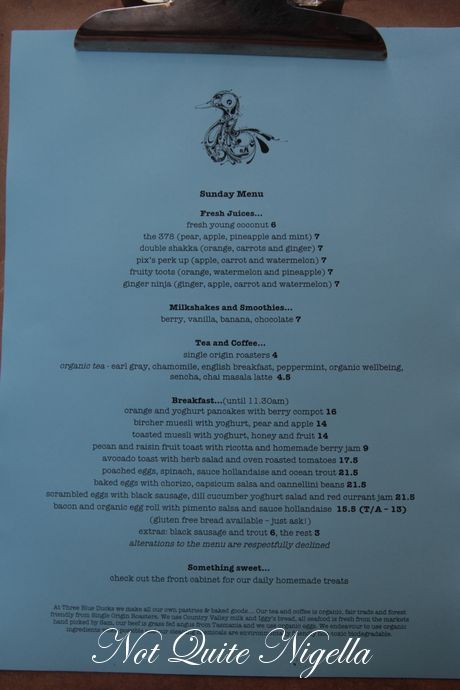 Why Three Blue Ducks as a name? The duck egg blue colour carries through to the colour of the menus and even the waitress (like Zooey Deschanel from New Girl) even exclaims "Oh look my nails are the same colour as the menu!" as she points at the menu. One of the waiters explains that the name Three Blue Ducks is a reference to Bronte Gully which is a picturesque spot "where grommets (young surfers) used to take the girls and..." he drifts off before admitting "It's actually quite naughty." ;) 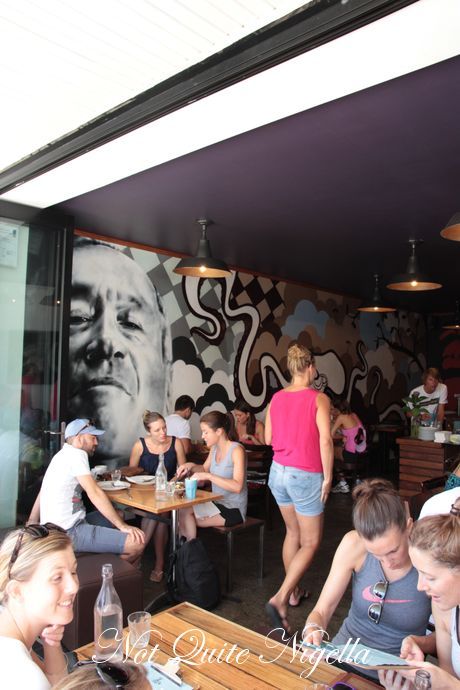 We're seated in the alleyway but not to worry if you do sit here, there is plenty of service and you're not left in social Siberia trying to wave down a passing waiter. The breakfast menu is available until 11:30am but Elly's advice to get there early (before 10:30am) pays off and we don't have to wait for a table. The menu tells us that the tea, coffee and eggs are organic, the sourdough is from Iggy's (a few door's down), the seafood is handpicked from the markets at 8am, the beef is grass fed from Tasmania and even their cleaning products are non toxic and biodegradable. 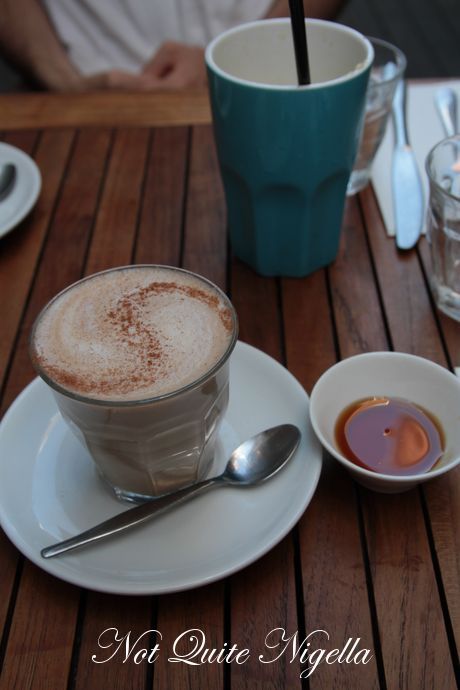 With a S (or is that a Yin Yang, thanks Jaqi!) imprinted in cinnamon on top, there was a side serve of runny honey with the aromatic chai. 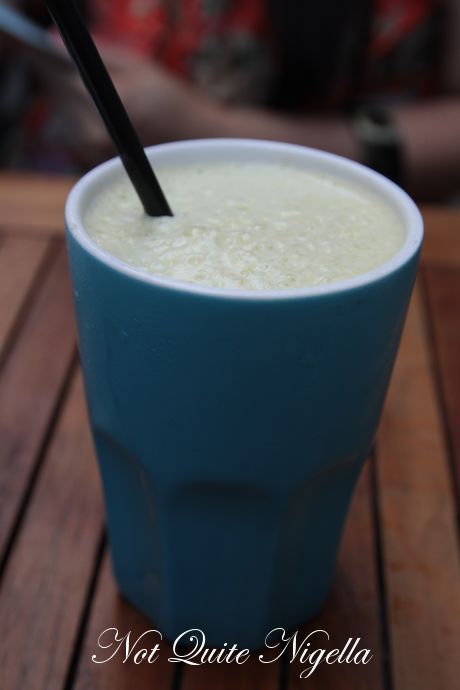 The pear, apple, pineapple and mint comes quickly, thick with foam and the predominant flavours are the pineapple and mint, the more strongly flavoured of the cast of fruit and herbs. It comes without ice but is chilled and smooth.

We had some trouble trying to decide what to order so we left it up to the waitress who told us that the three best sellers were the eggs: baked, scrambled and poached. Having heard that the baked eggs were amazing from Elly we ordered those and since I have a thing for black pudding, the scrambled eggs, with its motley crew of ingredients caught my eye. 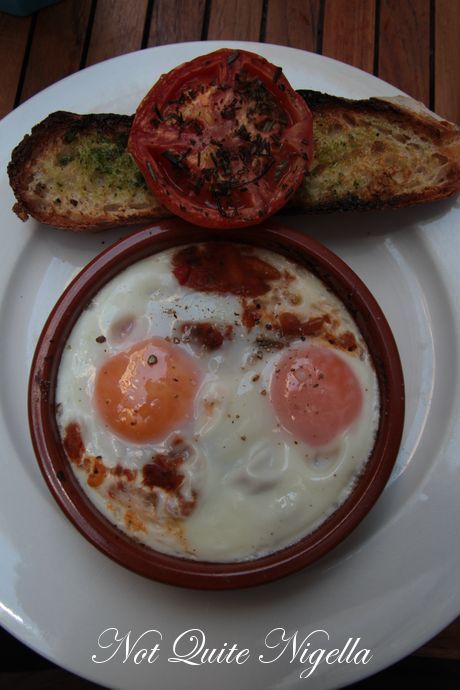 Mr NQN is making happy noises and making quick work with the baked eggs so I had to remind him that we were sharing ;) The baked eggs had lovely runny yolks, chunks of garlicky chorizo and cannellini beans. They were packed full of flavour and spicy and came with half a grilled, herbed tomato and a fat slice of toasted Iggy's sourdough bread. 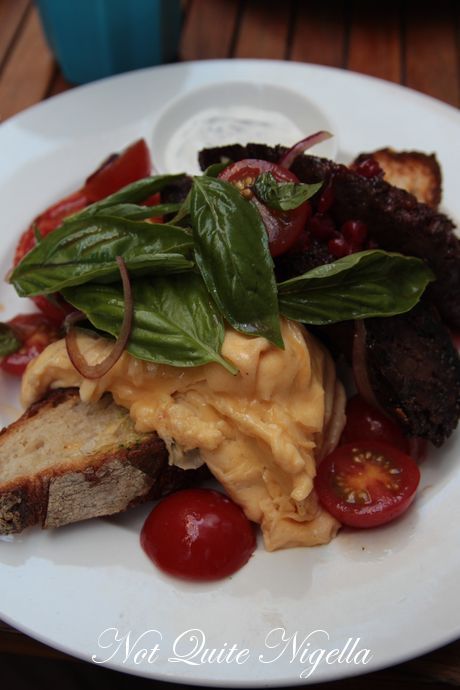 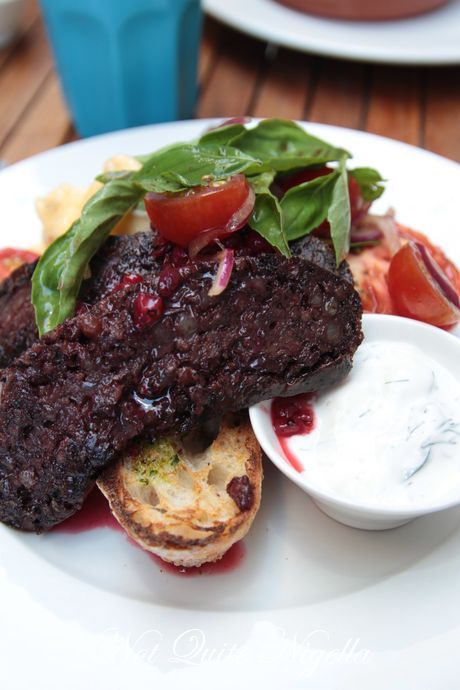 The scrambled eggs however were my undoing. Black or blood sausage when done right is just so lovely and this is definitely in the like category with it's rich, crumbly but soft and moist texture and hint of white pepper. Now I have to admit that a part of me was curious to see how it would go with the scrambled eggs, dill cucumber yogurt and redcurrant jelly but then when it is put down I see that there is also halved cherry tomatoes, half a grilled tomato and copious basil leaves to add to the melange. And somehow, defying logic, the elements combine beautifully and I find myself offering Mr NQN a quick swap back which he agrees to as he isn't as much of a black pudding fan as I am. I'm keeping quiet as I think to myself "your loss, my gain honey!" while he was probably thinking the same thing. 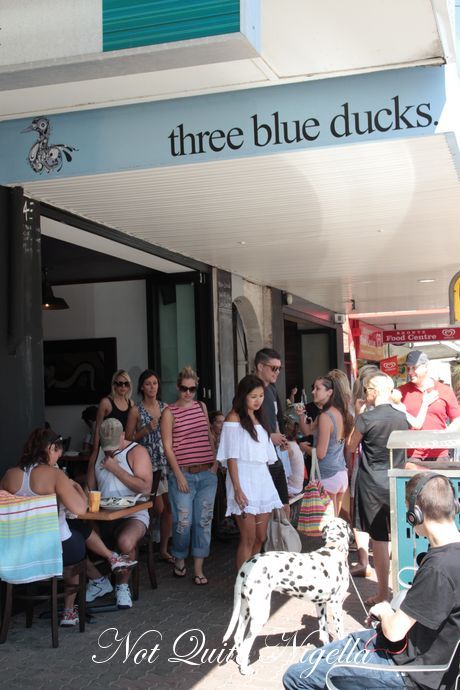 I go to the front to check out the home baked sweets and it is packed with people milling about both waiting for take away coffees and tables. I slip in between a few people, take a quick look at the glass pastry cabinet and decide against it. There are muffins and tarts and another cake but I think I'd like to end on the last note: the unlikely combo of black sausage, dill yogurt, redcurrant jelly, tomato and basil.

So tell me Dear Reader, do you agree with Jade Jagger? And how often do you go out for breakfast? 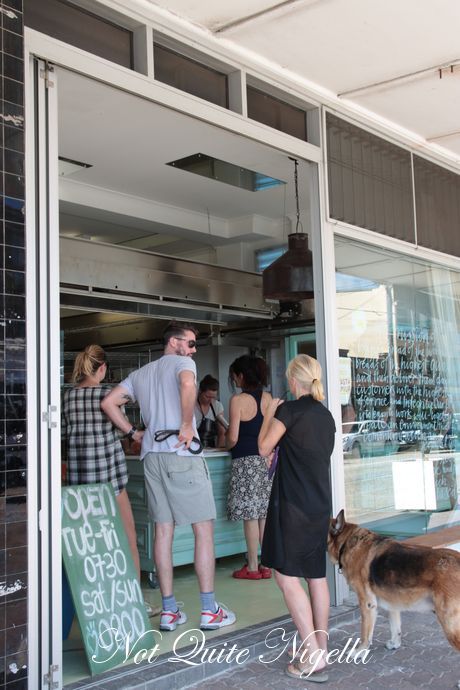 Where it seems everyone and their dog lines up for bread! Iggy's Sourdough, a few doors down. 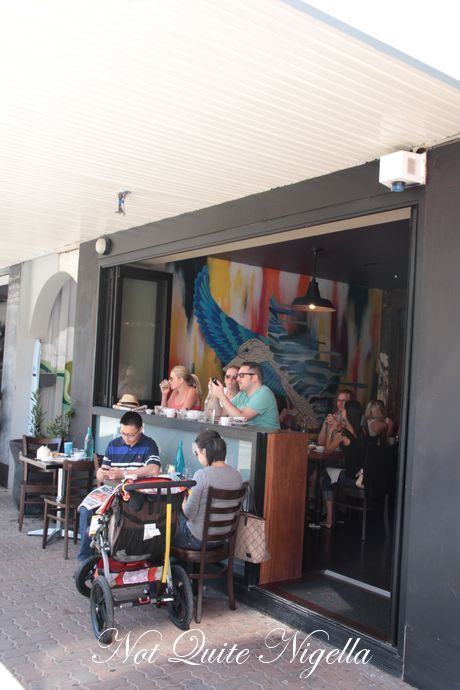