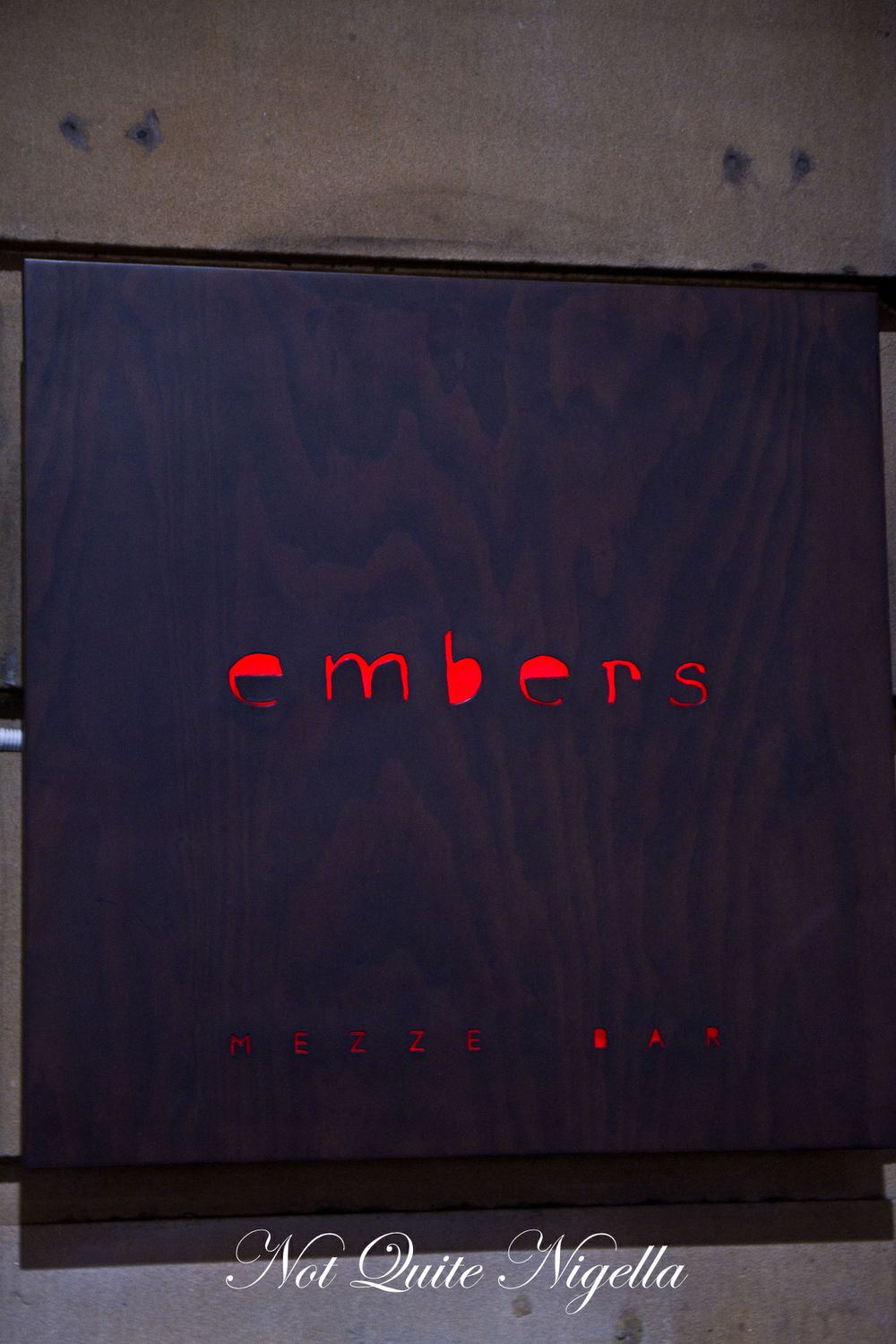 It would have to be a meal fit for a queen. Queen Viv to be exact. She was celebrating a big birthday and I wanted to find somewhere suitable for her majesty. Across the oceans, the Queen was having her jubilee but my focus was Queen Viv's celebrations. Many years ago we had all dined in the sandstone building where Embers sits and we all had good memories of our time there. Now, almost 15 years later, we are back. 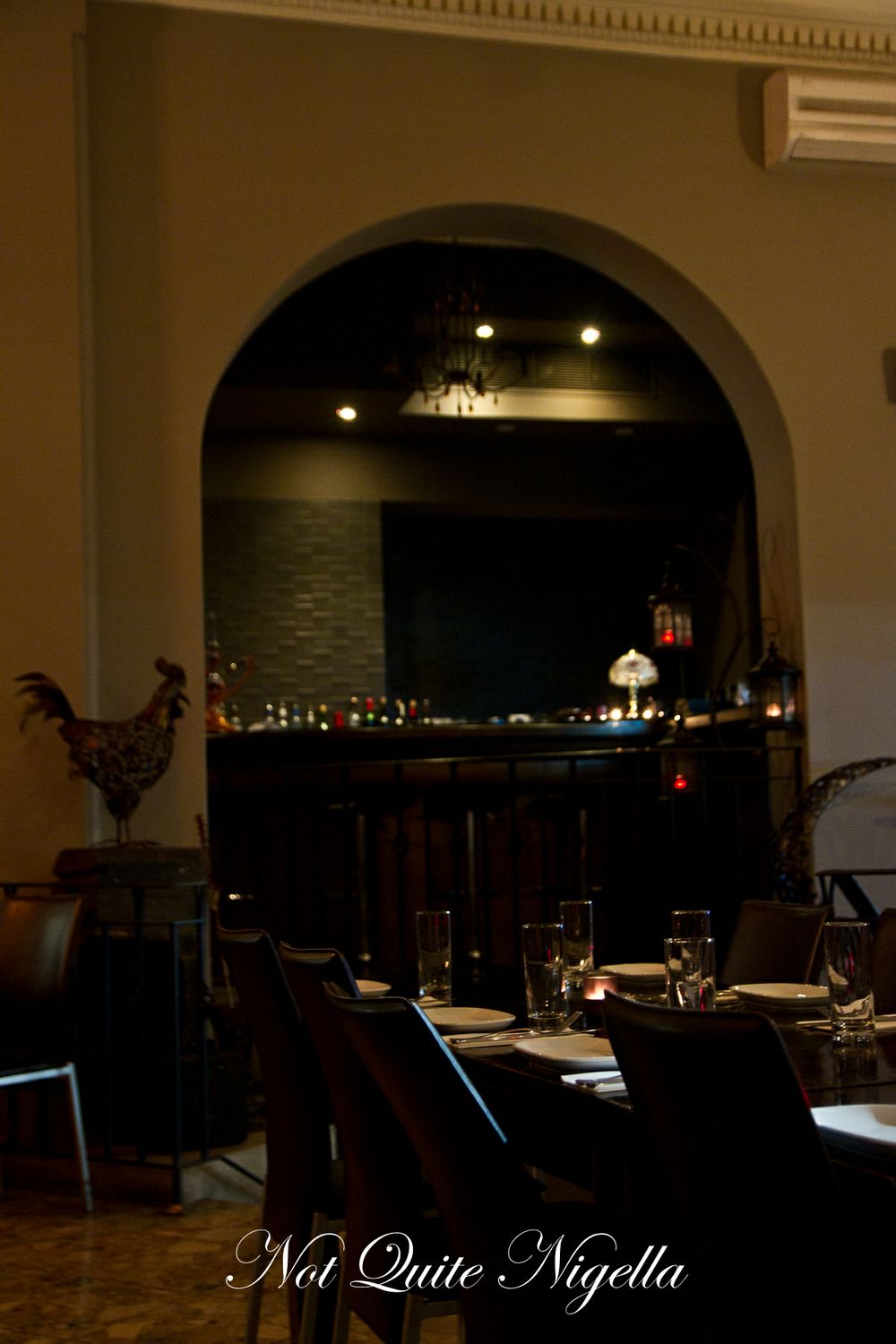 You may have walked past it countless times as the signage is very subtle-I know I have. The logo for Embers glows as a subtle, small discreet sign. Inside, it is dark, very dark indeed with small tea lights glowing on the tables. Murals of men and women smoking hookahs adorn the walls and there is also a bar to the right. The food is said to be modern Lebanese cuisine with a twist on traditional offerings. Former Rockpool chef Simon Zalloua is in the kitchen and he is of Lebanese descent. We take some recommendations on what to order and warm up. 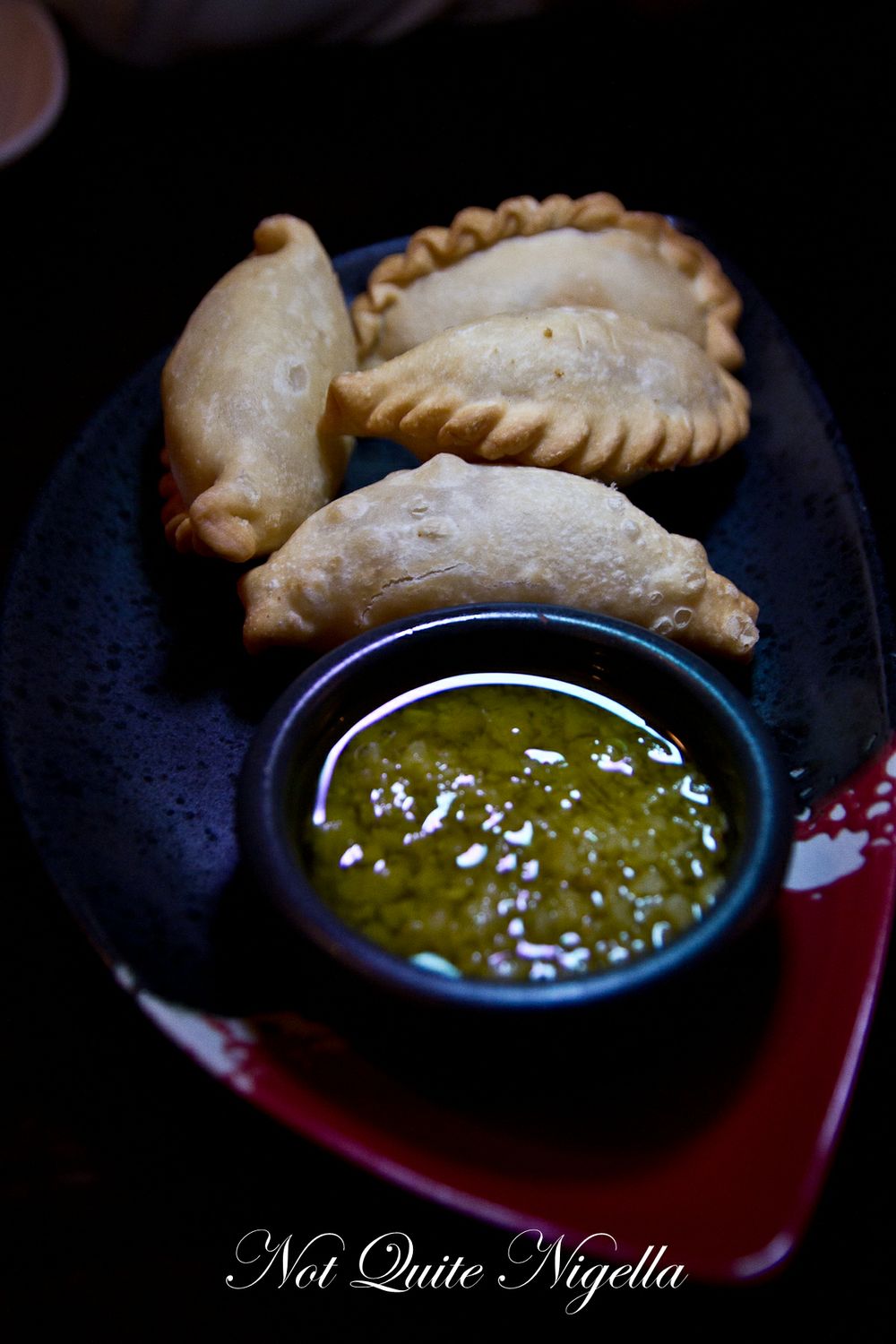 Not long after, our food starts arriving. Shanklish is a Lebanese cheese that fills these half moon pastries. The pastry is lovely and short and the inside filled with melted cheese and tomato. There is also a lamb version of these on the menu. 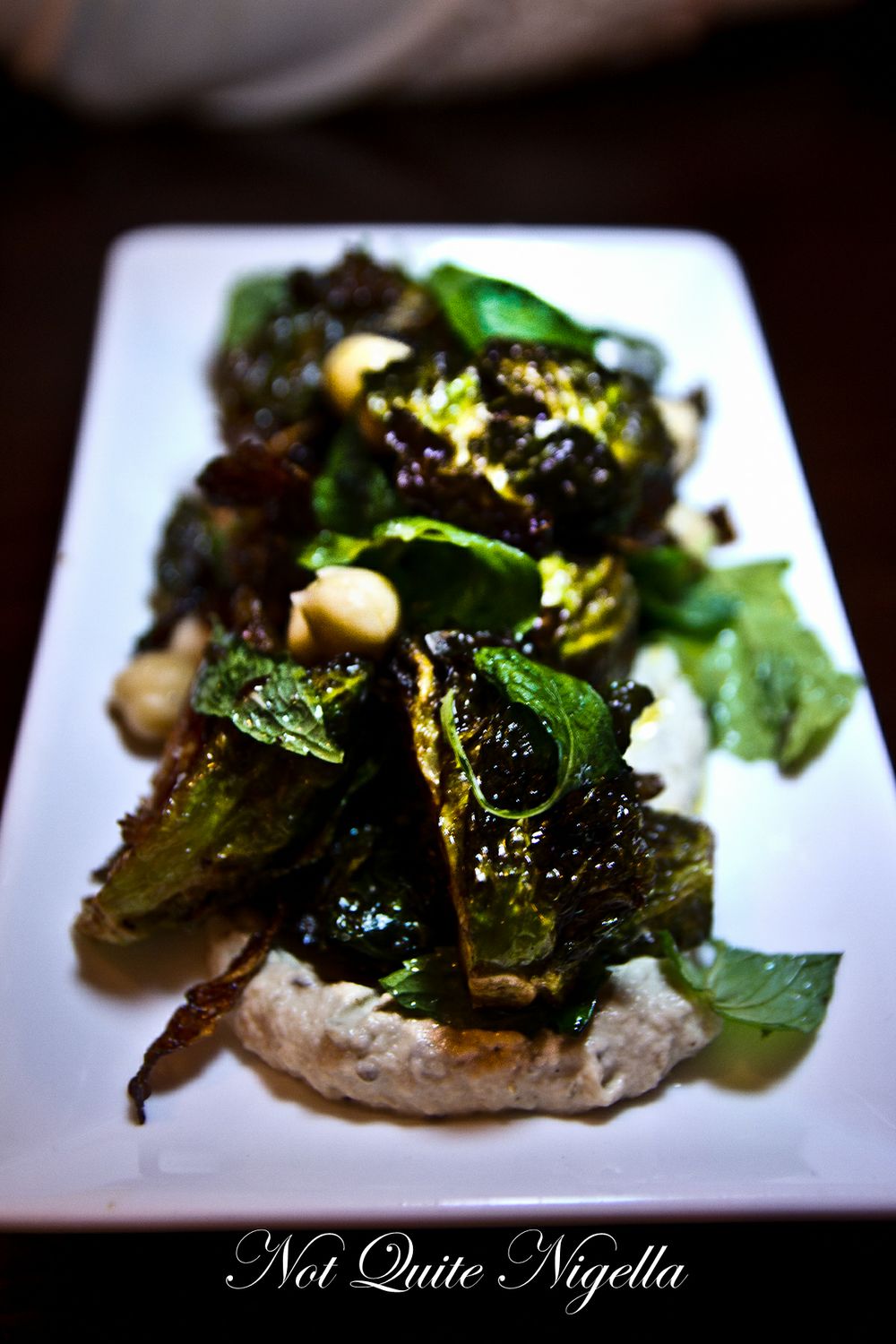 Miss America intones that "if brussel sprouts tasted like this when I was young, I would have eaten more." Indeed the humble and much hated sprout is experiencing a bit of a revival at the moment and here, it is enormously appealing indeed. The sprouts are lightly crispy, almost caramelised on some edges and served with baba ganoush eggplant dip and whole chickpeas. 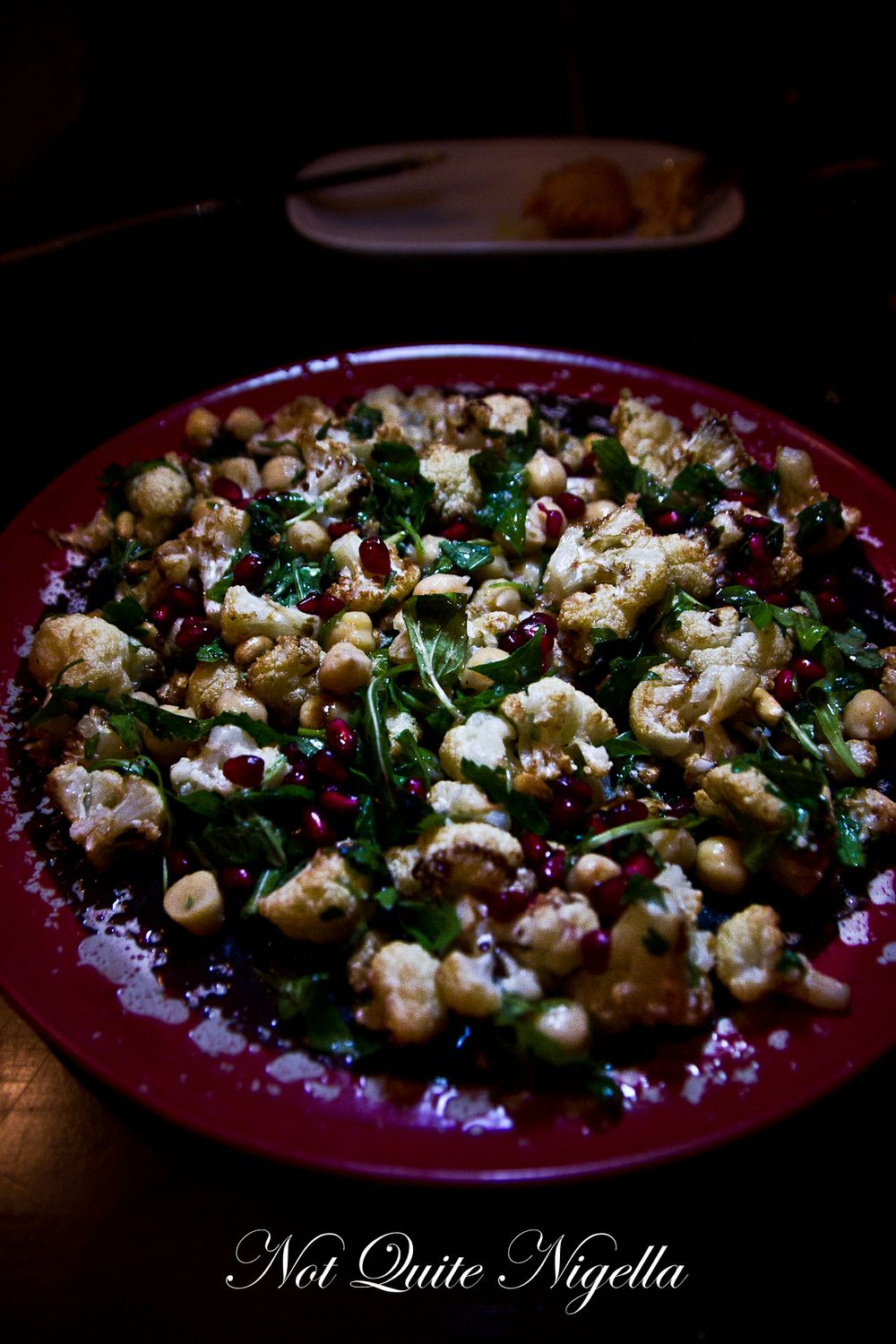 This dish was strongly recommended to us and it didn't disappoint. The cauliflower was just the right texture, soft but not soggy and wet and the chickpeas and pomegranate seeds and tangy pomegranate molasses lifted the cauliflower and gave it a nice acidity. 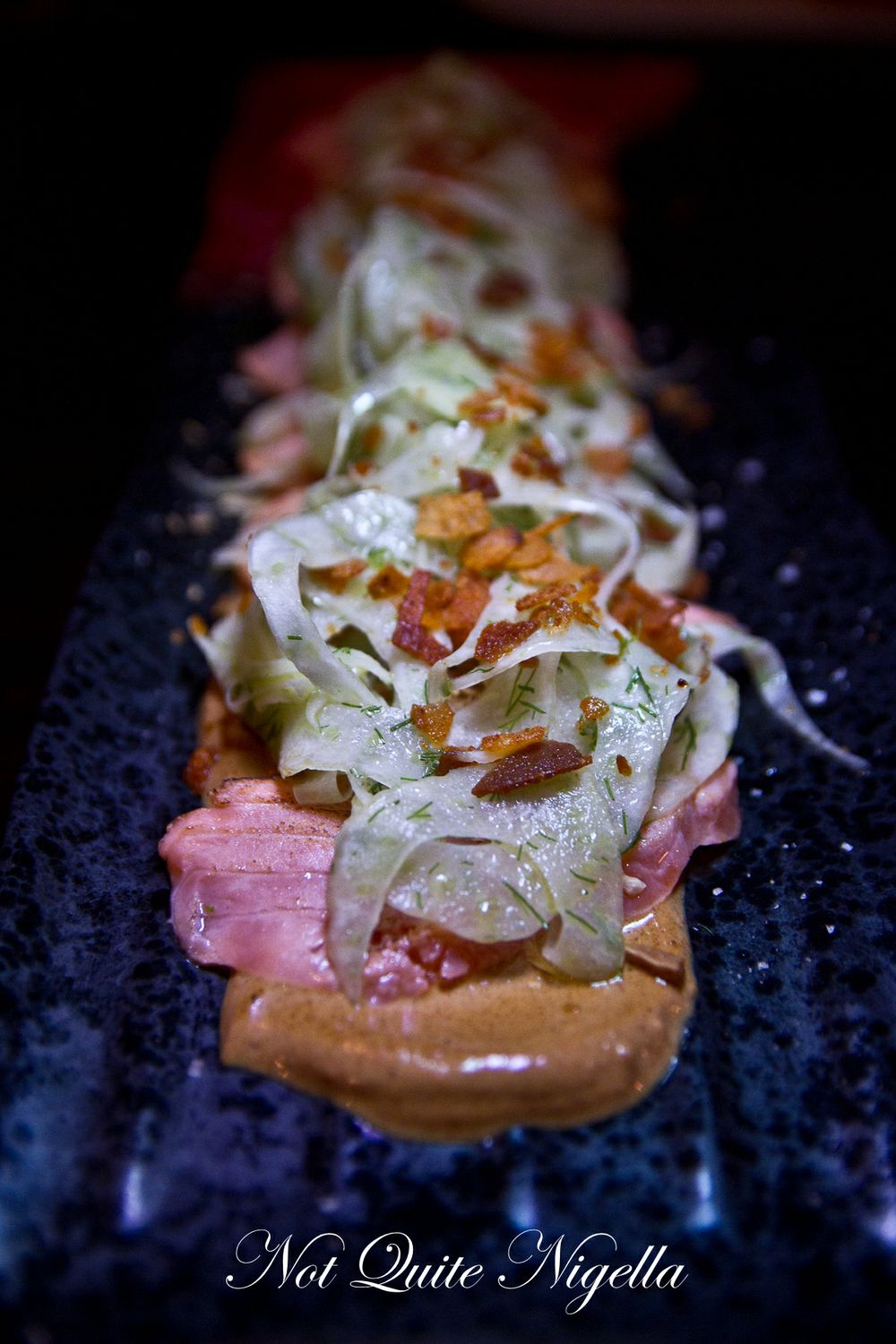 The sashimi style ocean trout was given a light torching to burnish it on one side and was served with a spiced tahini and paper thin fennel slices. Quite different from the Lebanese dishes we had tried in the past, we all adored mopping up the last of the spiced tahini sauce. One thing from traditional Lebanese meals would have been great would have been the abundance of bread for these sauces (although you can order some bread and it is complimentary). 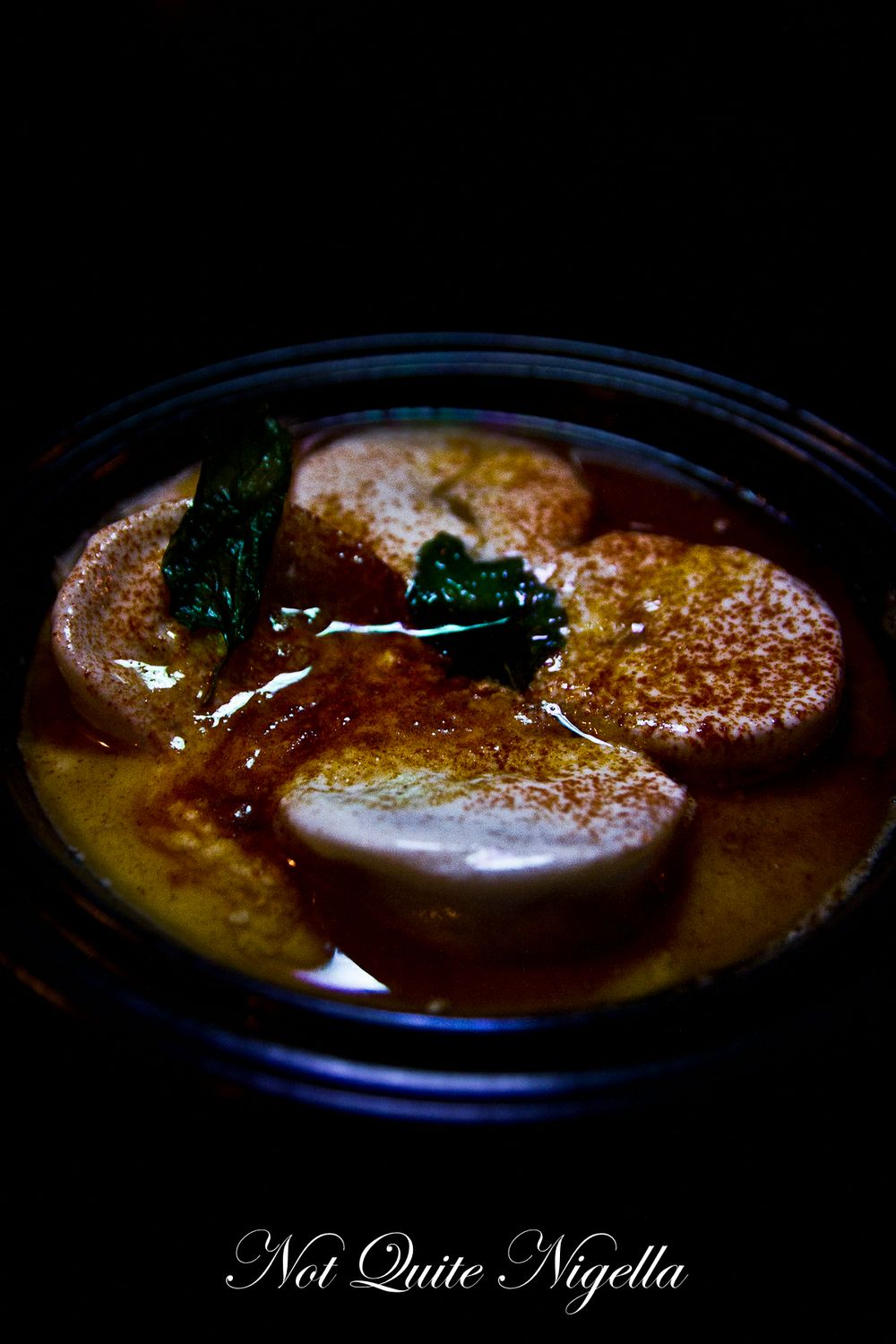 Arriving in a small red covered tagine, the hand made lamb dumplings come four to a serve. The filling has a surprising sweet element to it with lamb and onions and it is blanketed in a sauce of warm yogurt which is then covered in a browned butter sauce which you stir through the sauce. Again, some bread or some rice would have been fantastic to have with the sauce along with a spoon to help eat it 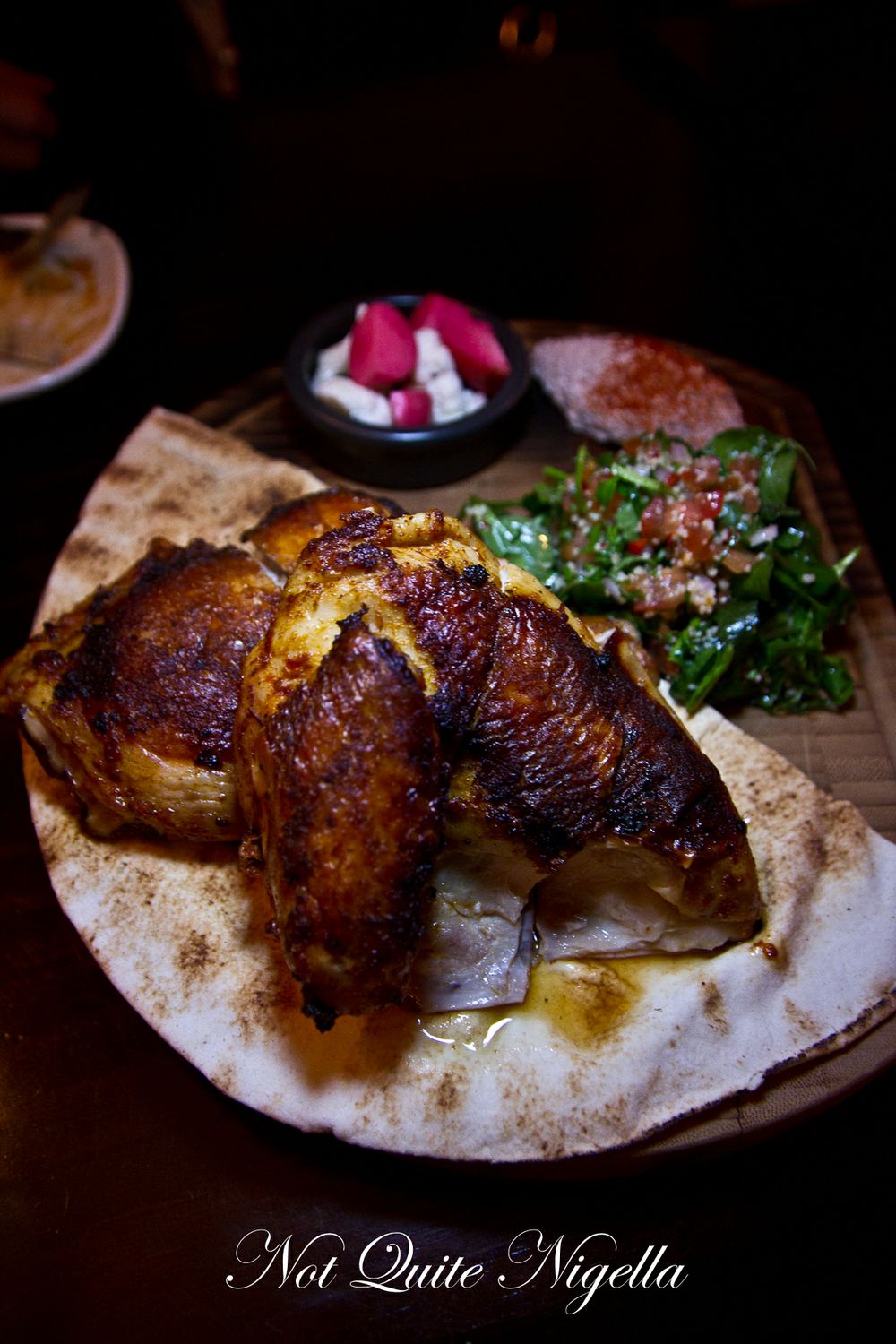 They explain that the chicken for this dish is brined for six hours and then marinated in a shisk taouk marinade for 24 hours. The result is a divinely tender and moist half chicken set atop some Lebanese bread. It comes with walnut taratour which is a delicious dip or spread, watercress tabouli as well as some radish and cauliflower pickles. Whilst we adored the flavour of the dish, Queen Viv and Mr NQN did find it difficult to eat. It was suggested to us that we put some chicken into a piece of the Lebanese bread although the pieces underneath the chicken were too wet to wrap anything in so we ordered some extra bread. But deboning the chicken proved difficult for some in the dark and poor Queen Viv bit into her chicken, found a bone and the contents of the wrap fell on her dress. Miss America and I fared better but Mr NQN found it hard to debone the chicken in the dark. 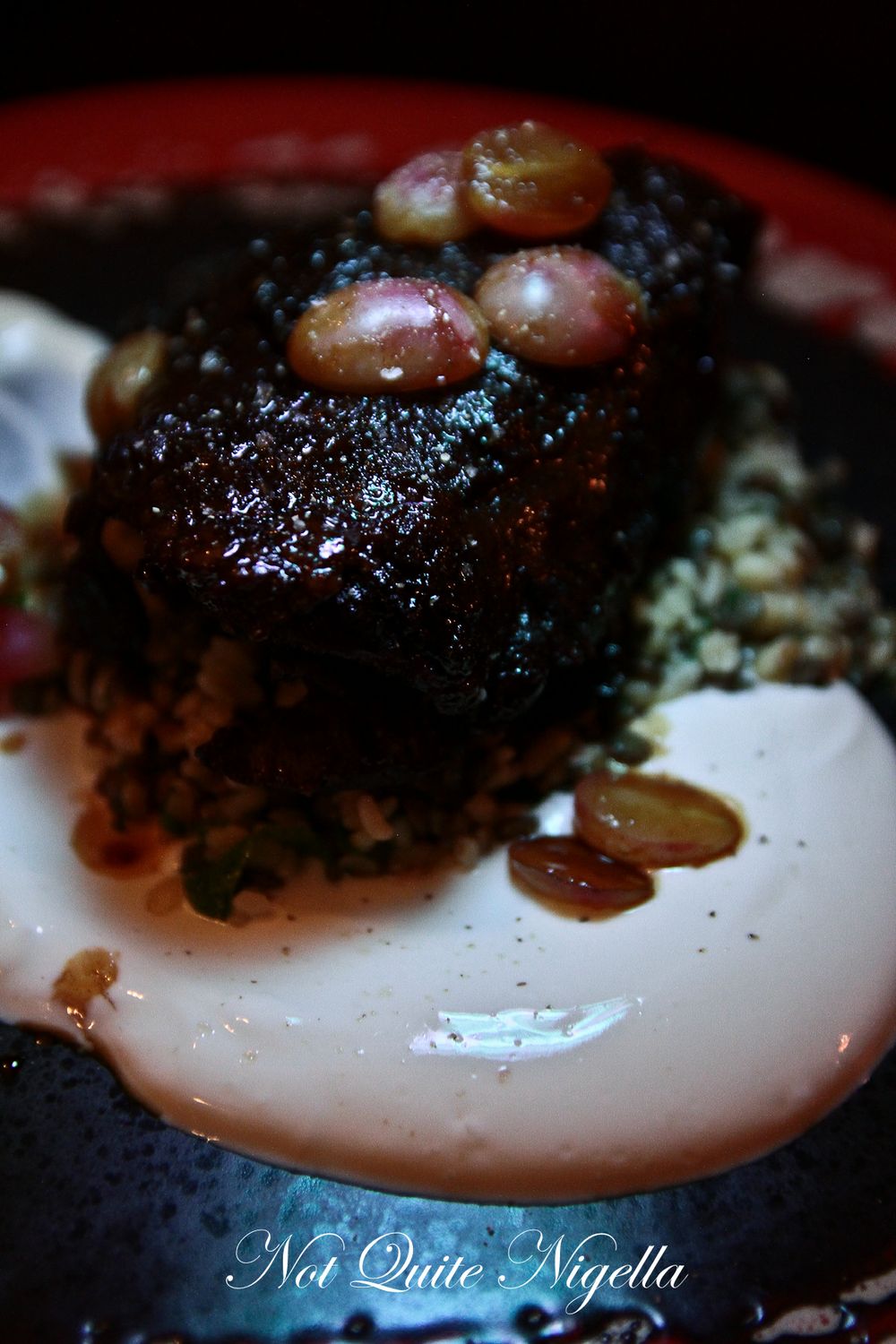 The carob glazed beef cheeks was tender and only needed a fork and spoon to pull it apart. It was soft and served with sliced grapes, freekah and a sheep's milk yogurt labne sauce. The carob flavour was light but distinct enough to impart an interesting richness to the beef cheek. 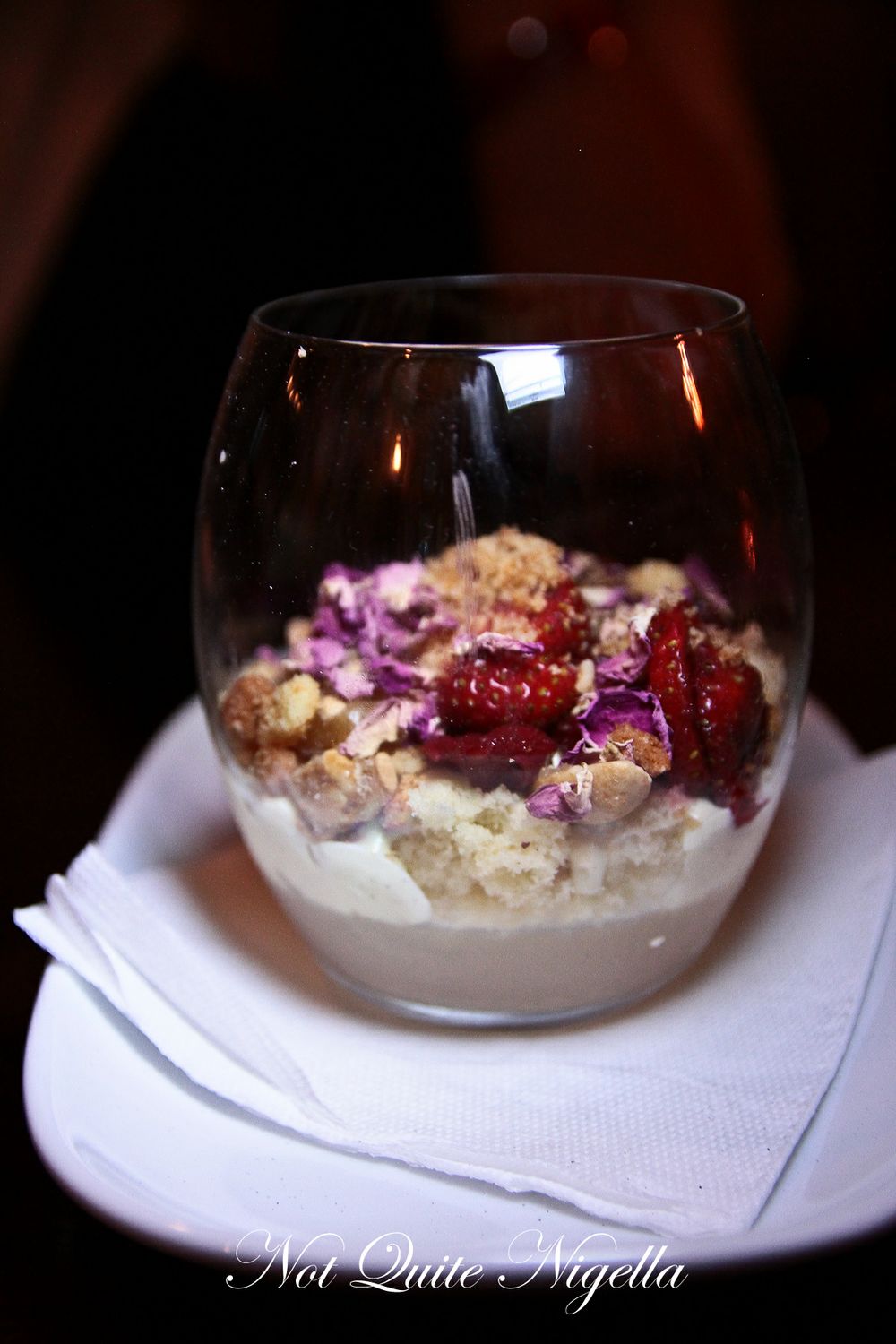 Dessert time! They had kindly put in some sparklers for Queen Viv who refused all offers for a song. No matter, the dessert was a beauty. In a glass, the bottom layer was rosewater jelly, then a layer of thick sahleb cream (sahleb or salep is the flour from ground orchid tubers) and on top of this was a layer of sumac flavoured strawberries which have that distinctive lemony sumac flavour to them. There was also chunks of sable biscuit and dried rose petals which perfumed the dessert prettily. 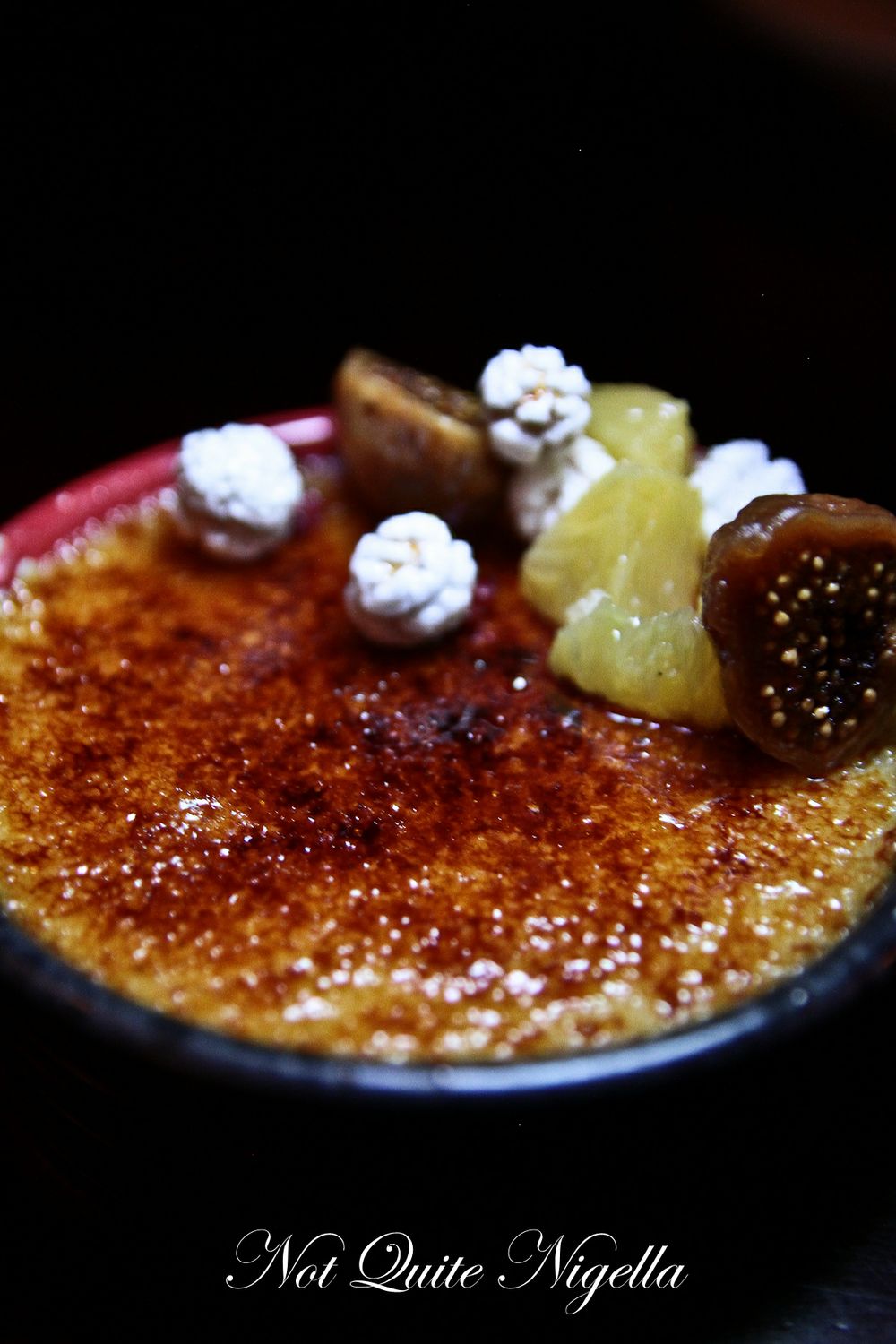 The tahini brulee is something that we've never tried before but after a spoonful of this beautifully nutty creme brulee with the silky creamy texture, it is something that I'll want to try replicating at home. It comes with a thin toffee top and halved dried persian figs and little candied chickpeas. As for the birthday girl, Queen Viv is pleased at the choice of restaurant and with a click of her heels is off home with her birthday present.

So tell me Dear Reader, who is your favourite royal and why? And do you like dark, moodily lit restaurants or ones with more light? 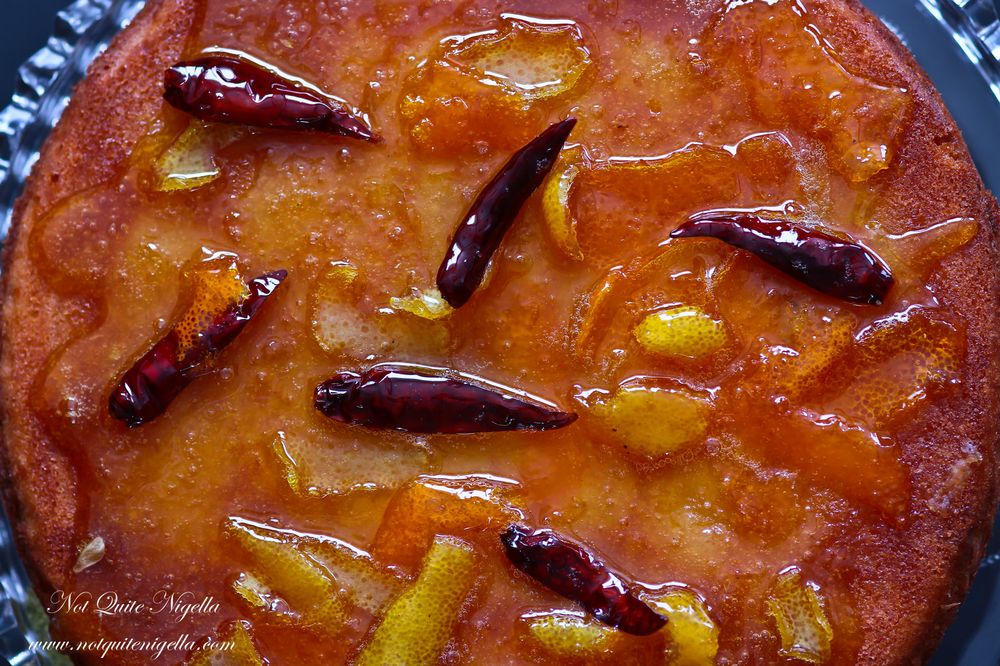 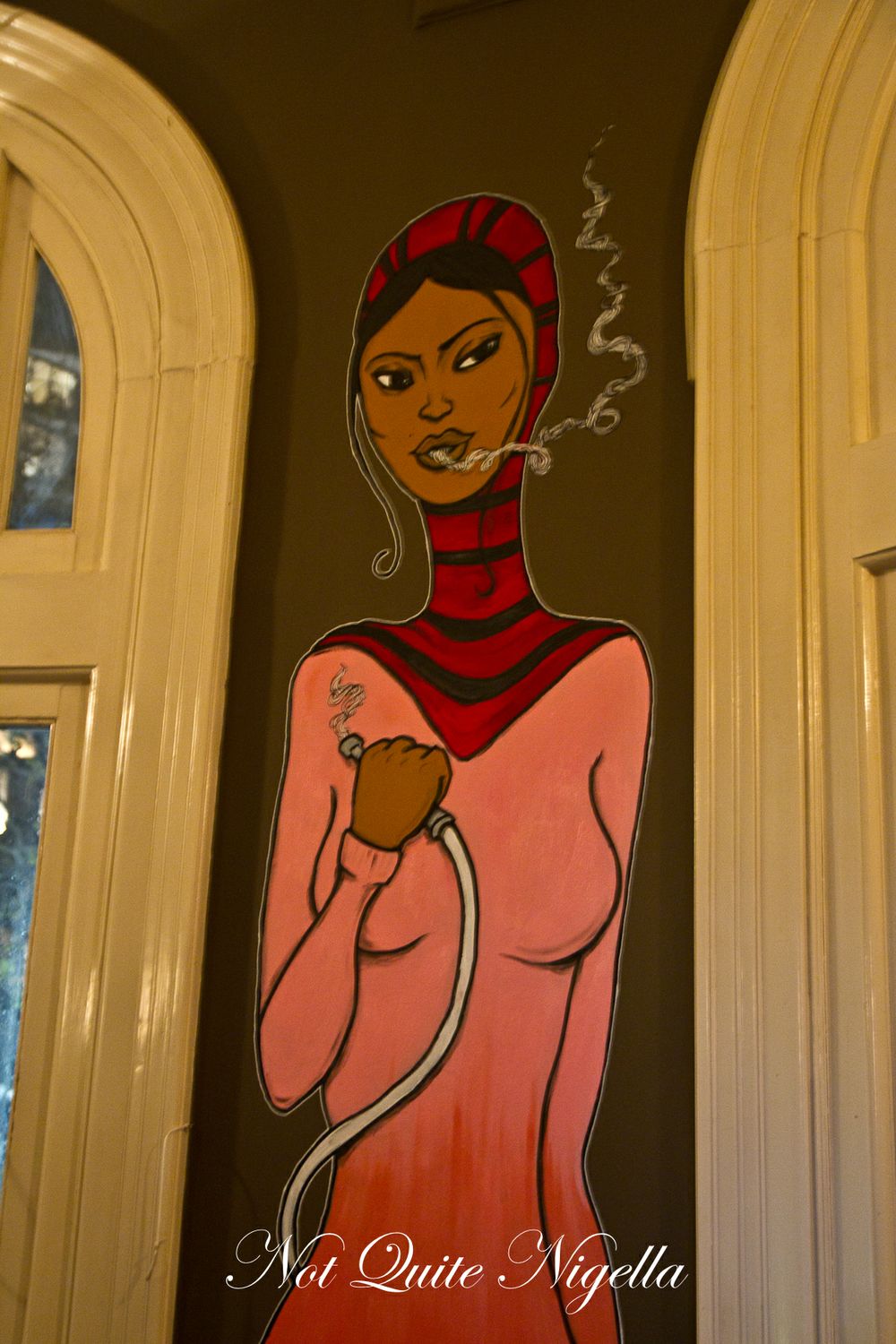