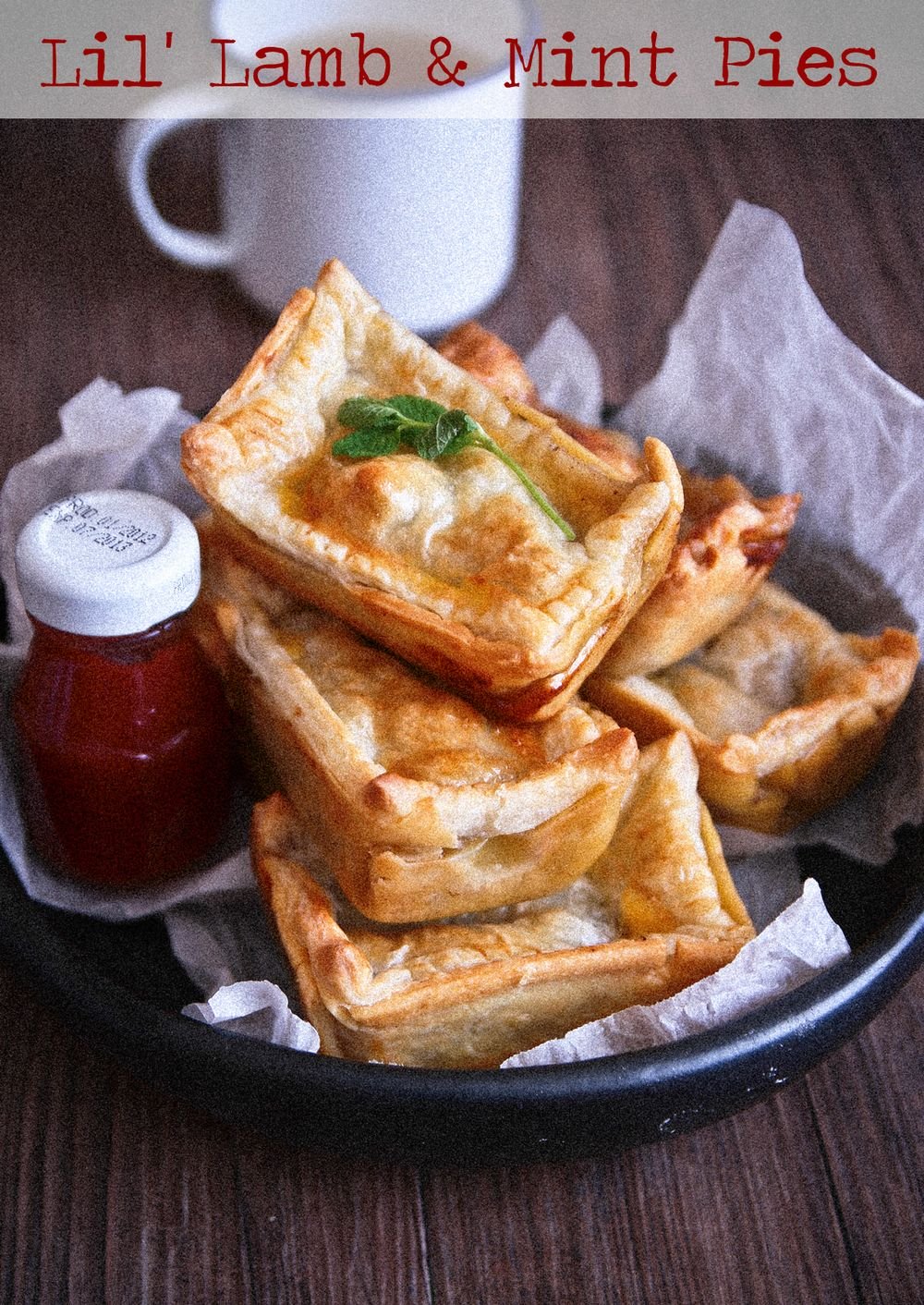 Once upon a time ago, I worked as an extra in movies. I had just come back from overseas and was looking for something to do that passed the time and paid well while I sought more regular work. I signed up to an agency and luckily for me, they were casting for a movie called "The Matrix 2 and 3" which was being shot at Fox Studios just near where I lived. Even luckier was that as the plotline went, it was set sometime in the future and their vision was for a whole lot of people of mixed race and of colour.

So off I went to an audition. I asked my agent what I needed to wear or do. His advice was simple.

"Maaaake looove to the camera" he said. I was surprised. We were supposed to be fighters so didn't I need to look tough?

"Nope, just maaaake loooove to the camera" he said definitely. Then added "I mean it, that's what they want, even for this role. And for every other role after that. Seduuuce the camera..." 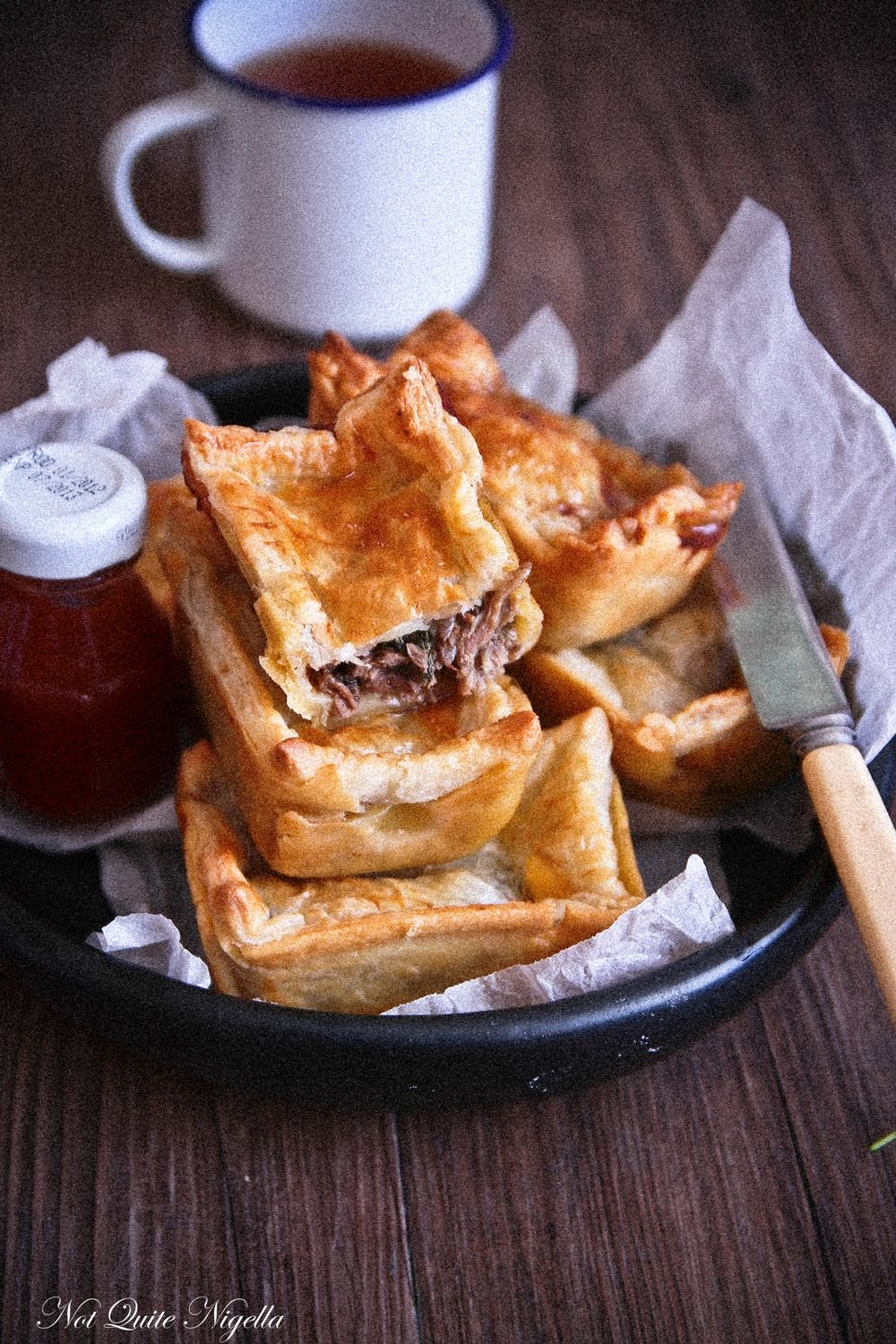 So off I went with the advice "seduce the camera" echoing my head. I kept thinking that it was a shame that I don't find square metal objects a turn on but there you go. Staring at a camera while hundreds of people are standing around you watching and watching the camera footage is nerve wracking stuff. Making love to it is even weirder. But somehow I managed to do something, I don't remember exactly what and I got the green light to become one of the "special extras" - a term for nothing really, although it meant steady work for 3 weeks shooting a couple of scenes.

As you can see my acting career didn't really take off although I do love watching the show "Extras"... 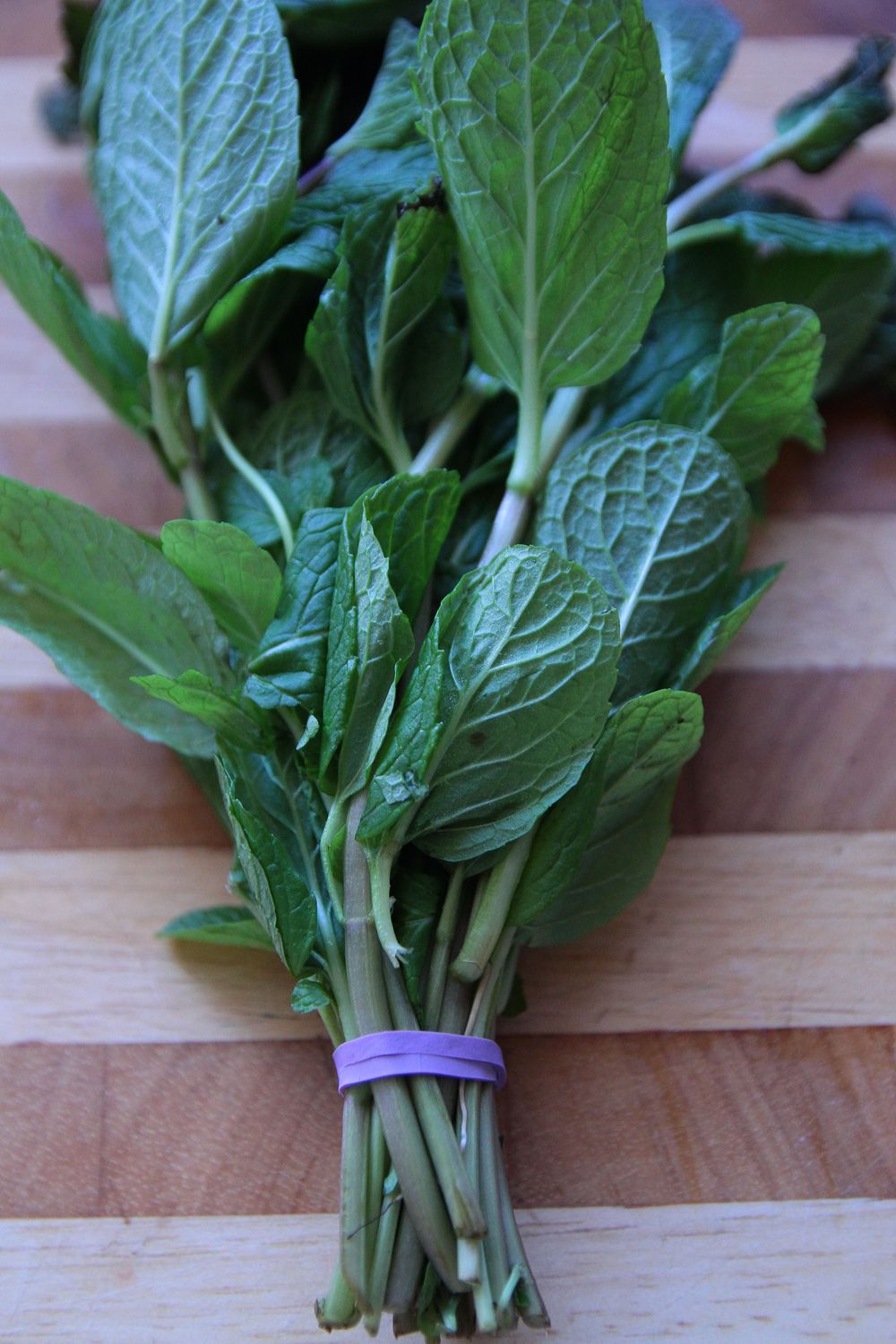 Anyway, what does this have to do with these Lil' Lamb and Mint Sauce pies? Well these little things will give you a come hither come eat me look like no other. After I made a big batch of these, I ate one, and then another, and then unable to resist the rich, soft meat and the sweet mint sauce and buttery pastry I ate another. The filling is from Wednesday's slow cooker lamb recipe and as I squirrelled away a container of lamb just to fill these pies. They definitely nailed the seduction factor...

So tell me Dear Reader, have you ever had a dream to work in movies or television? Which would you rather and is there a television show that you've always wanted to be in? For me, it's True Blood, Dexter or The Big Bang Theory! ;)

Step 1 - First make the mint sauce as the lamb is already cooked. In a jug, measure out the sugar and water and stir to dissolve the sugar. Add the mint leaves and white wine vinegar and allow to sit for 10-15 minutes-you can use this time to thaw out the pastry and preheat the oven. 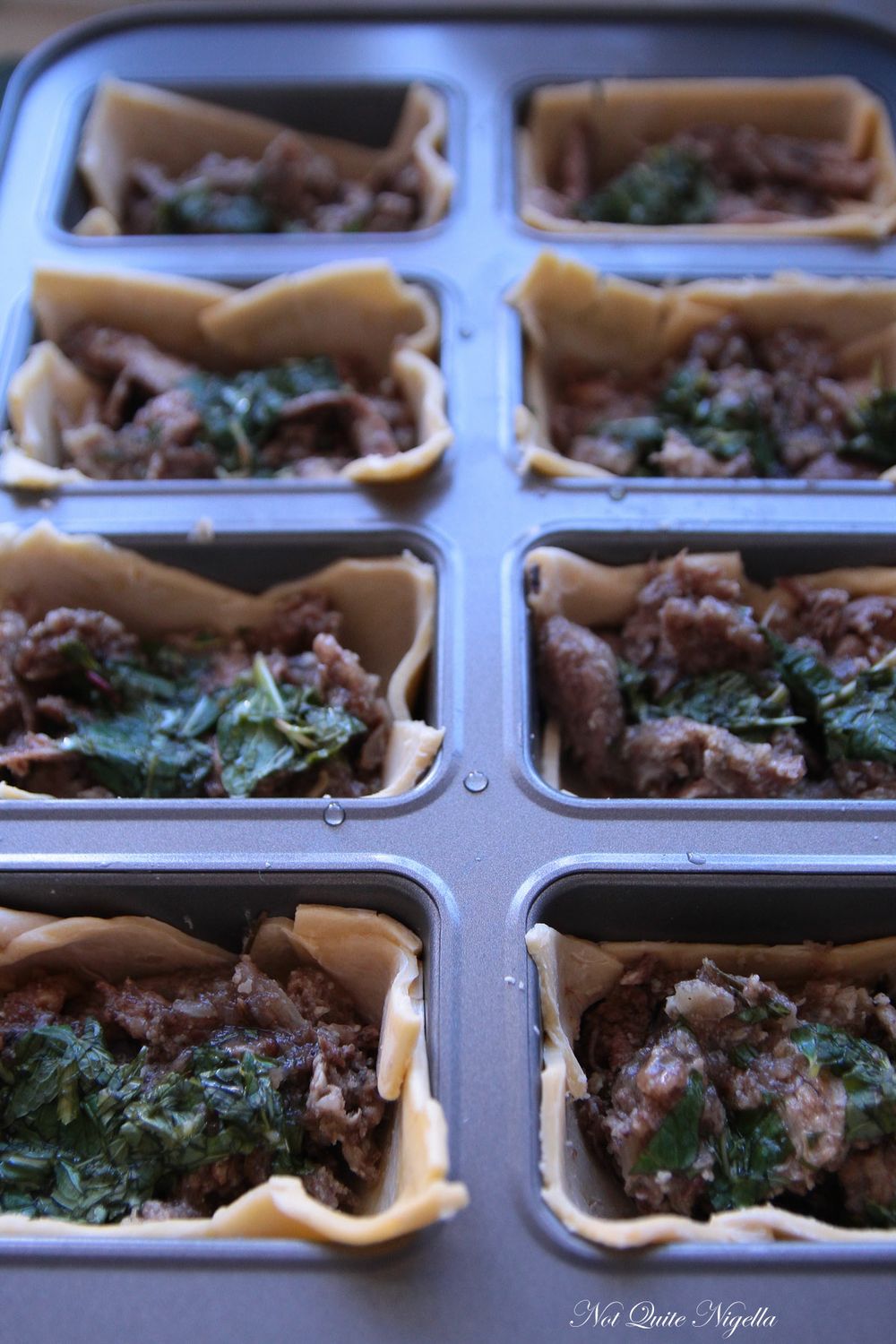 Step 2 - Preheat the oven to 225C/437F. Allow the pastry to come to room temperature. Butter a muffin tray (round or whatever shape you like) and with a small, sharp knife, cut up the shortcrust pastry into shapes to fit in the tin and line the bottom of the tin with the pastry. 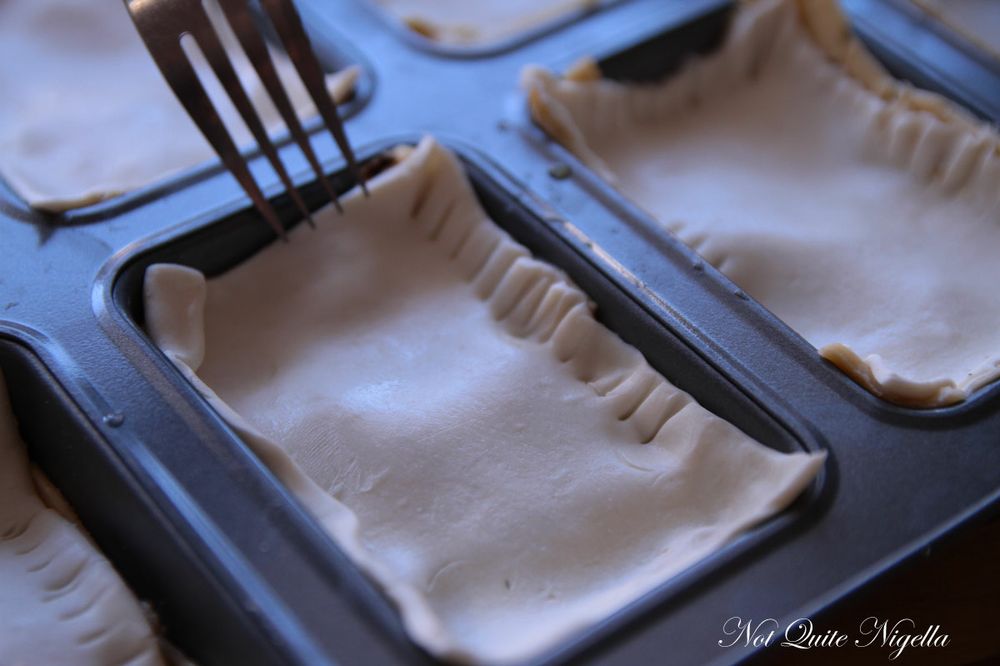 Step 3 - Fill with the lamb meat and then top with the mint leaves from the sauce spooning a bit but not too much of the liquid into it (about a teaspoon should fine and it should be soaked up in the meat). Cut the puff pastry to fit on top of the pies. With a pastry brush, brush one side of the pie with egg wash and place it egg wash side down and then gently seal the edges of the pie. To make the crimp marks, simply press gently with a fork. Bake for 20 -25 minutes until golden brown on top and make sure the base is cooked too. 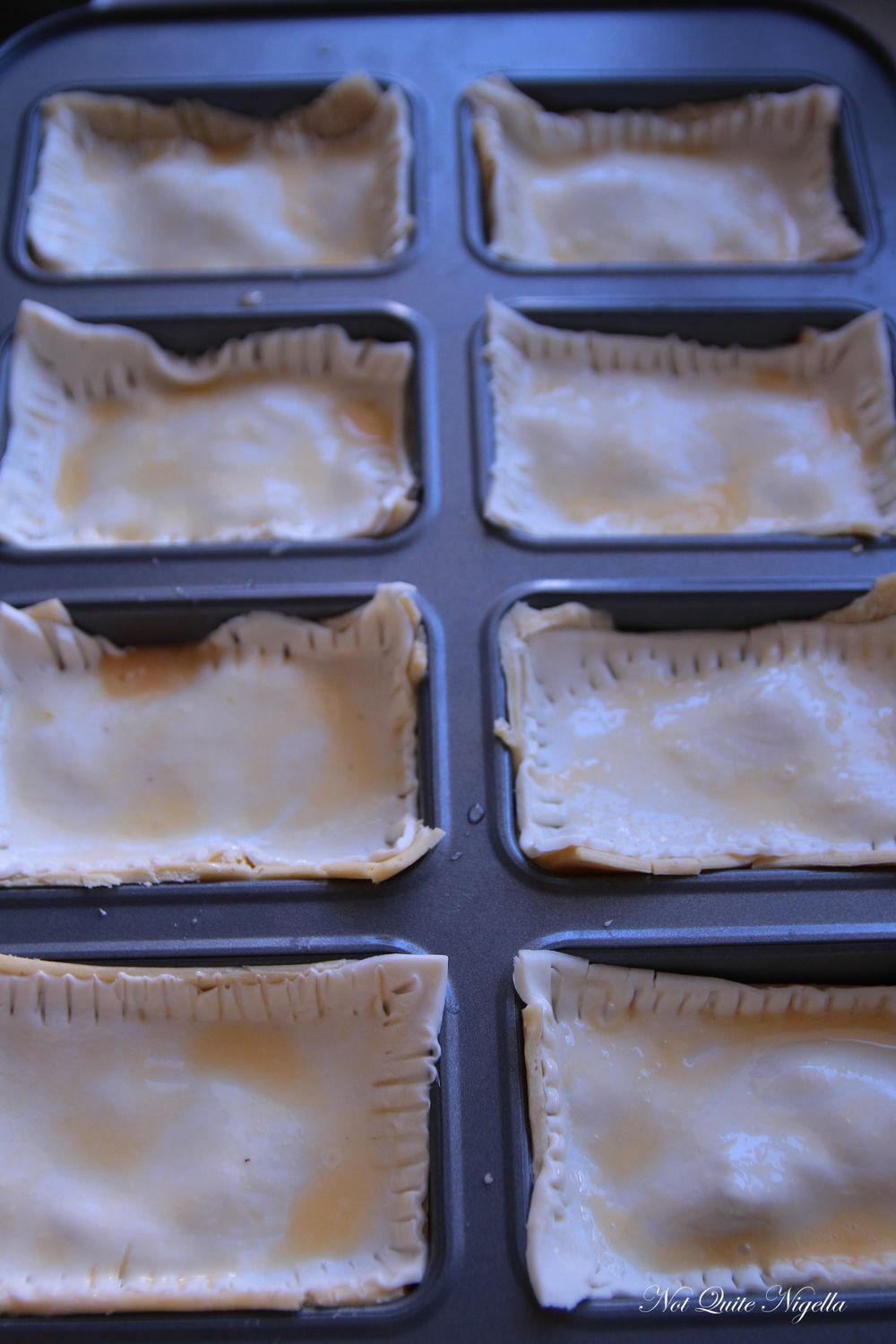 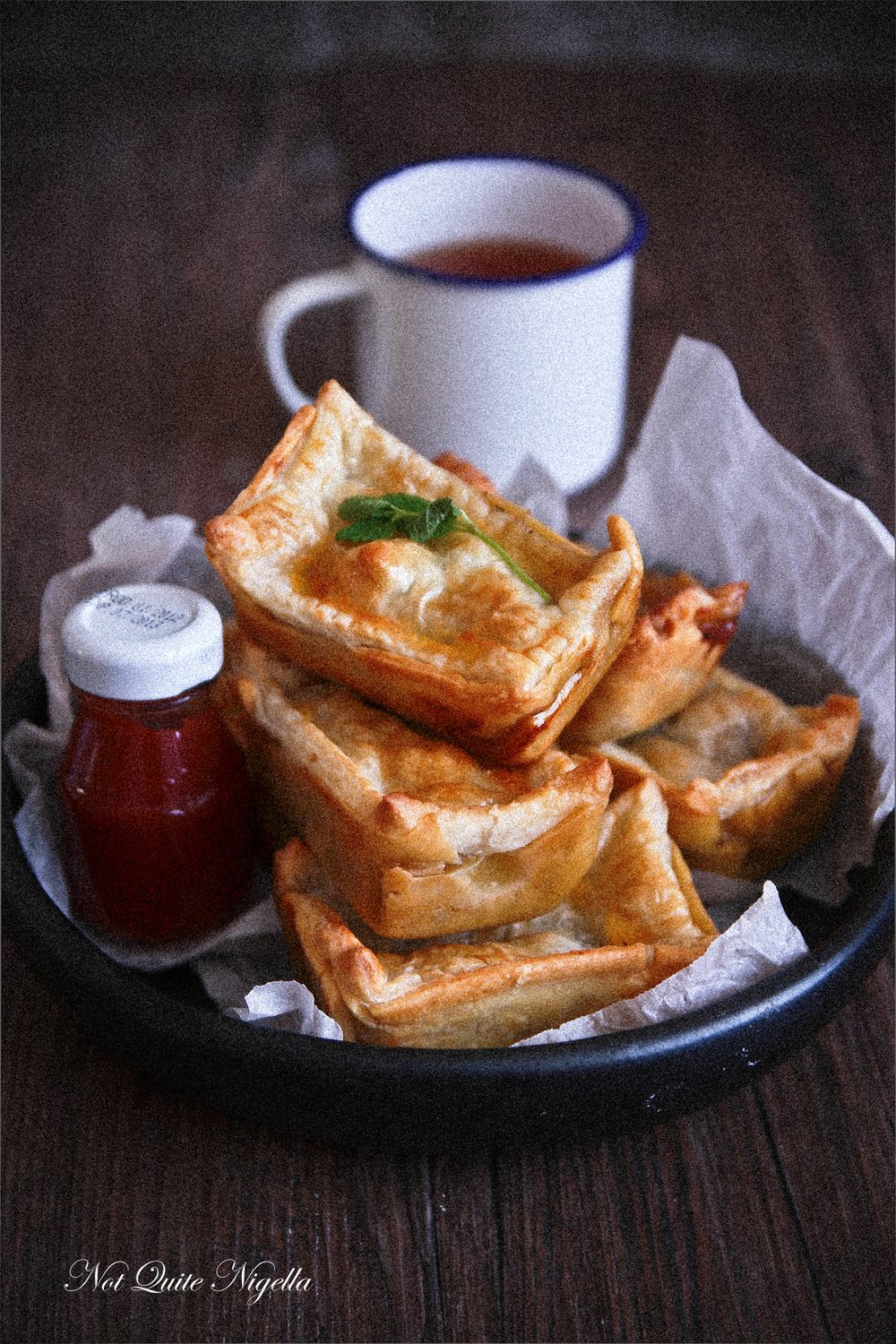