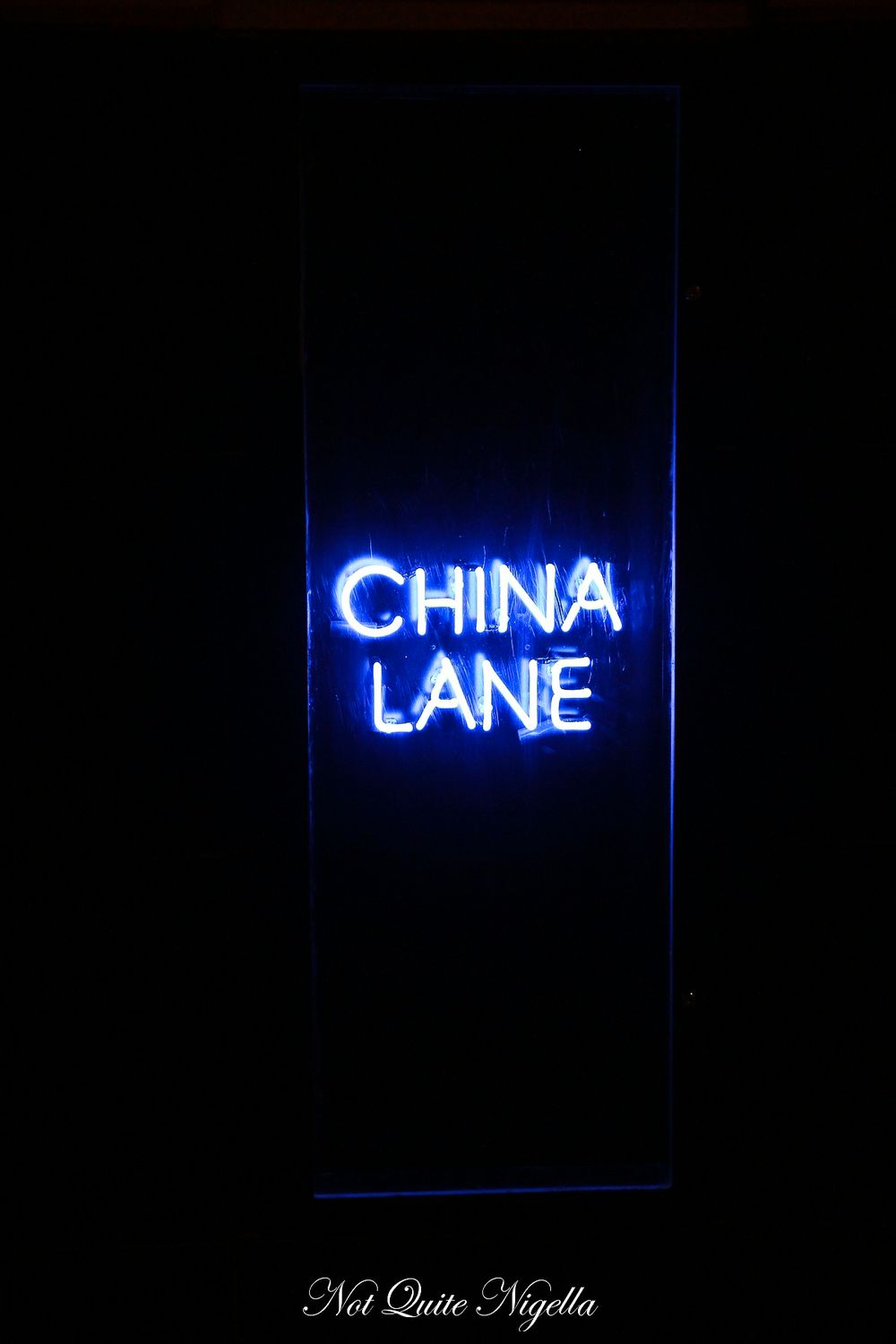 From: Not Quite Nigella

How are you? I hope you are well! I just have a quick question for your re: China Lane. I need to take my parents there but I'm worried that it's too hipster for them from looking at the website. What do you think? Is it parent friendly?

In a twist on the kid friendly restaurant, I wanted to take my parents to a parent friendly restaurant. That is, I wanted to spare them a hipster environment in which they weren't comfortable. Gaynor responded that it was a bit hipster along with a bit of a hit on the hip pocket but she would take her parents there. I figured that since my parents had enjoyed their meal at China Beach in Manly (the same owners), they might like it here. 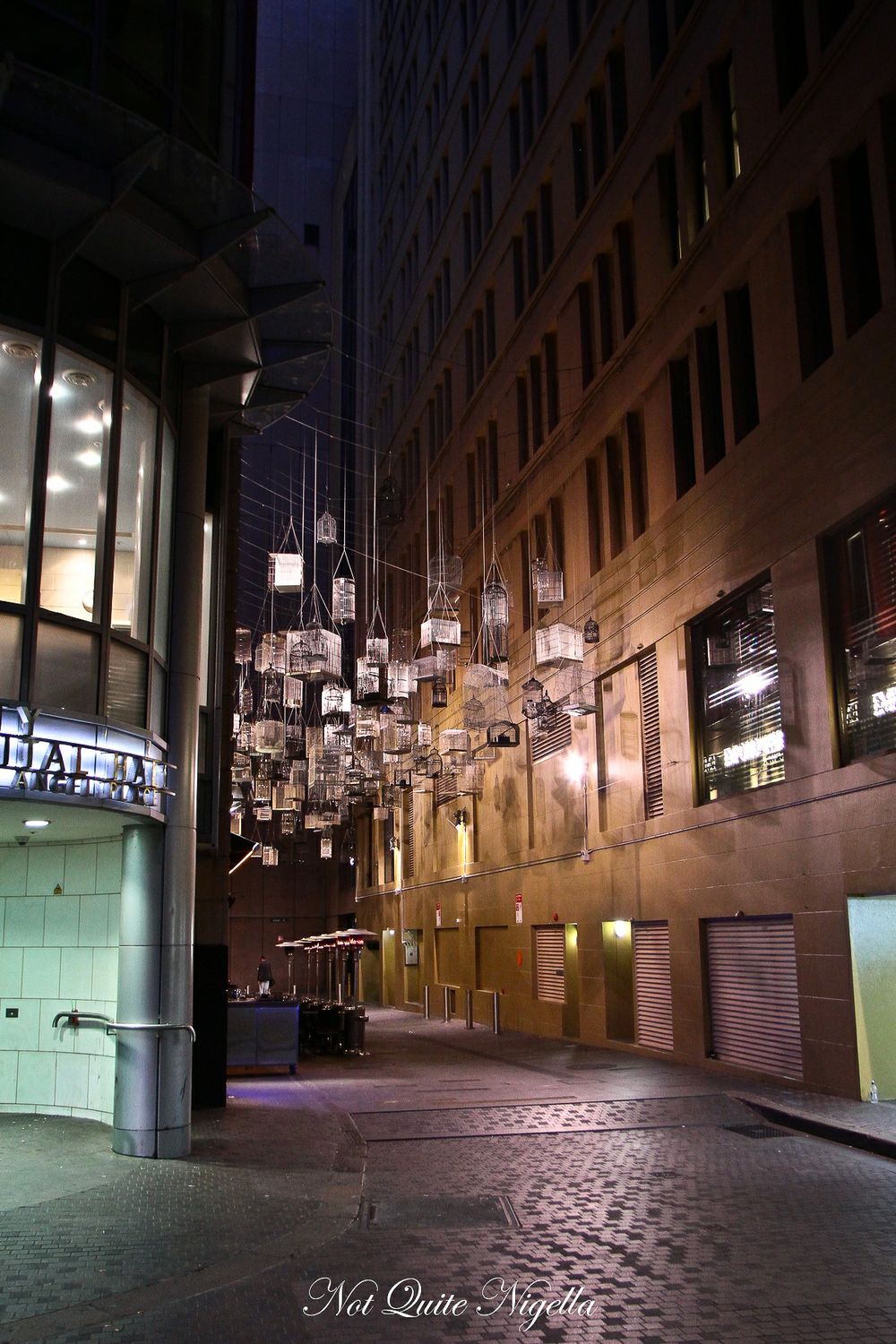 Angel Place is a small laneway just off George Street and Martin Place. Somewhat fittingly, there is a display of 180 metal bird cages suspended above the area outside the restaurant and lends it a somewhat Hong Kong atmosphere. The art installation called Forgotten Songs is actually separate to the restaurant and was installed by the City of Sydney to commemorate the 50 birds that used to be heard in Central Sydney before they were forced out by European settlement and is a statement about habitat loss. Interestingly, the birds heard during the day are different from the nocturnal bird sounds at night. Walking into the restaurant we notice that we're the first diners at 6:10pm. So early that the staff are still folding napkins in the back banquette. But soon after come the rest of the early diners. 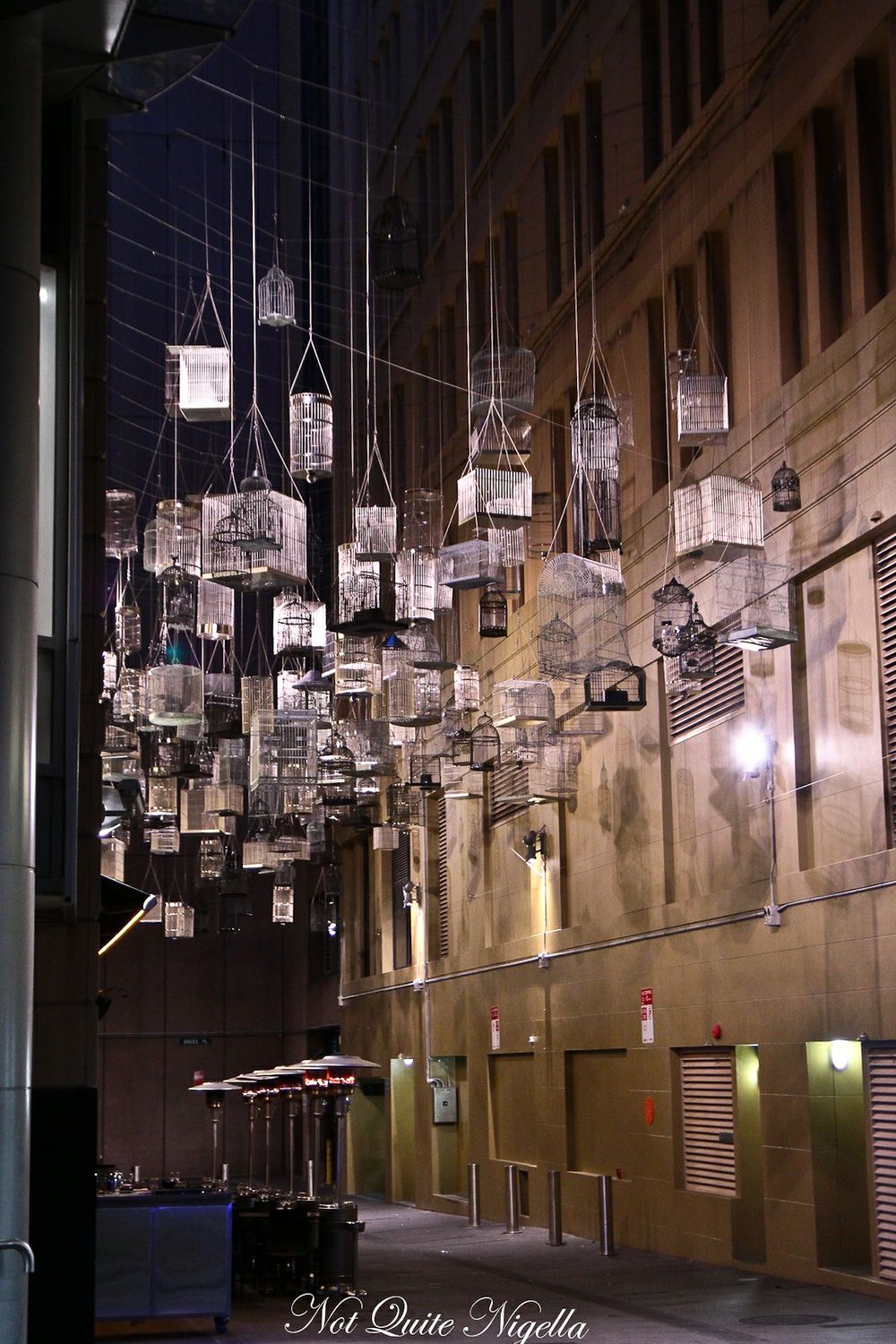 "It's very dark, I can't read the menu" my mother says.

"I don't like this fizzy water" they both say. "I want some plain tap water."

"There are no Chinese chefs in the kitchen" my dad says craning his neck.

"You know sometimes they can cook better than Chinese chefs" my mother counters. 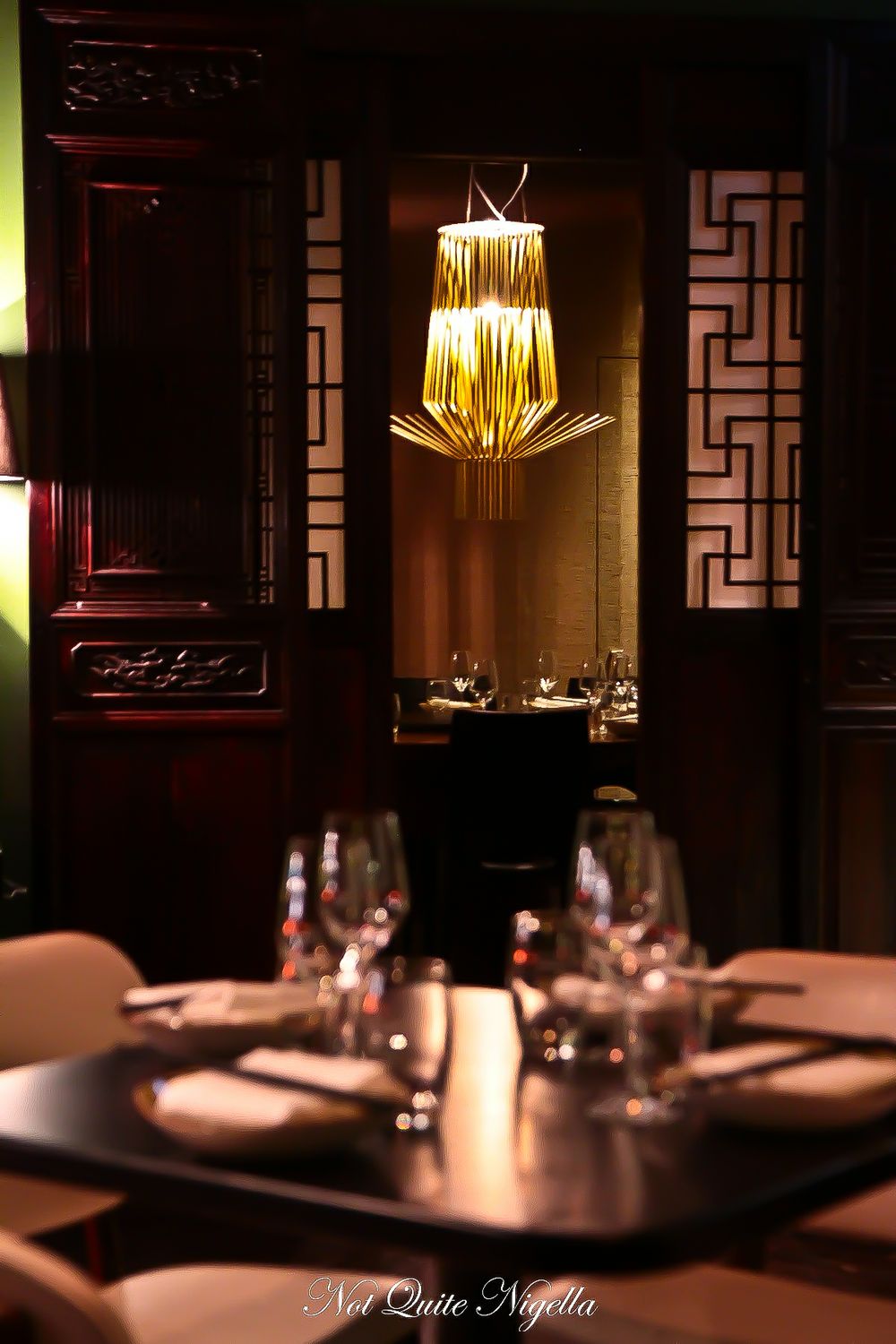 Our waiter is very attentive and my mother is mollified when her request for a pot of hot water comes to the table in a nice teapot. He tells us that the meals are all designed to be shared by groups of four. I overhear him talking to a table of two next to us and he tells that they can do half sized portions too if they want to taste more food which is a good idea.

We need to give the table back at 8:15pm so we order quickly. I had Gaynor and Ute's recommendations at hand. We also went with one of the specials, the whole cod served dragon style because my dad loves whole fish. We bypassed the dumplings as we recalled that they came four to a serve and at $16 I was sure that my parents didn't consider them good value. 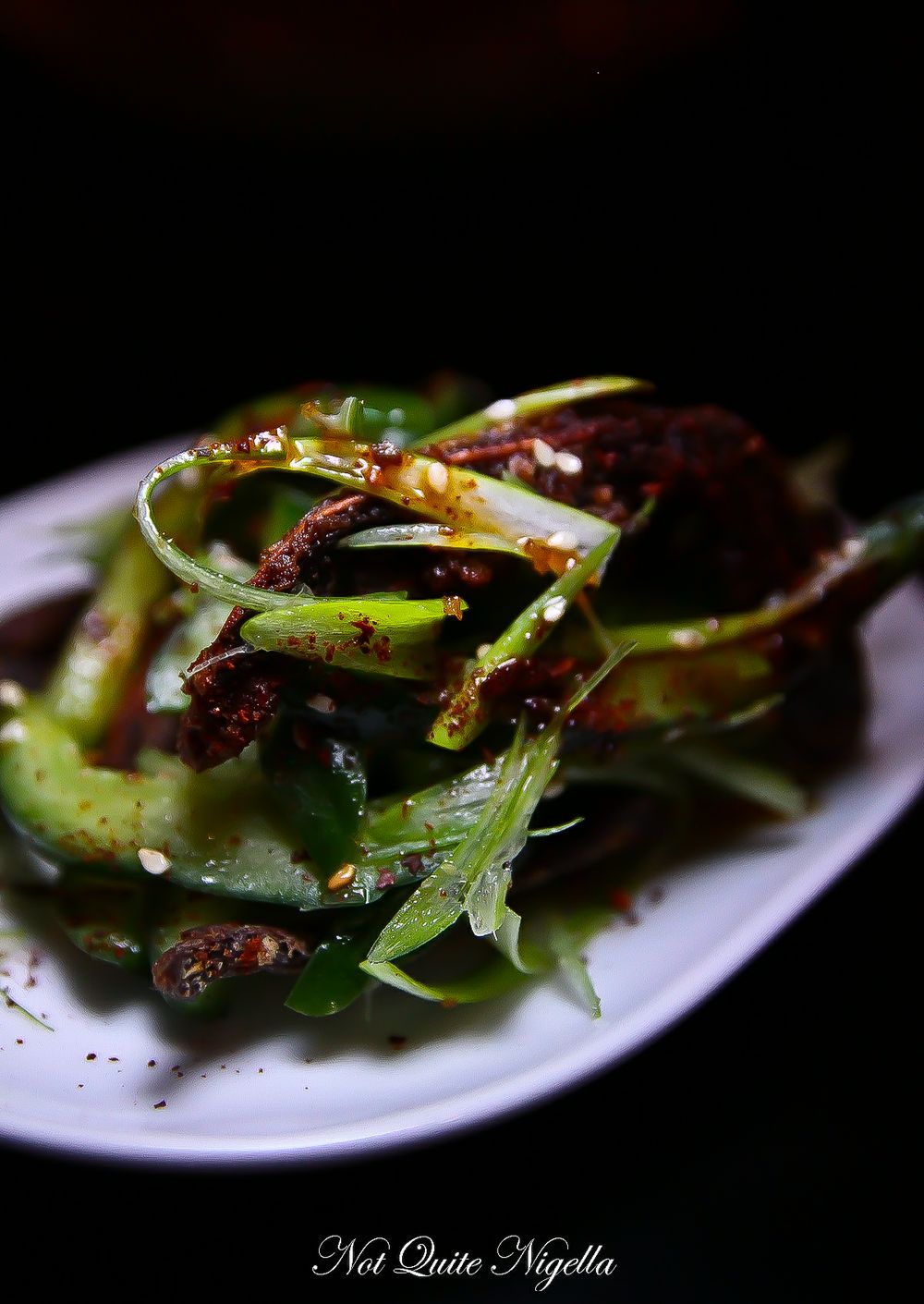 The first dish comes out quickly. The crispy master stock pig's ear was served thinly sliced and crispy fried with pieces of cucumber and green onion. It's full of flavour, even with a slight fishy taste to it (my parents are convinced that it is fried fish) but is a great little morsel to get the tastebuds going. 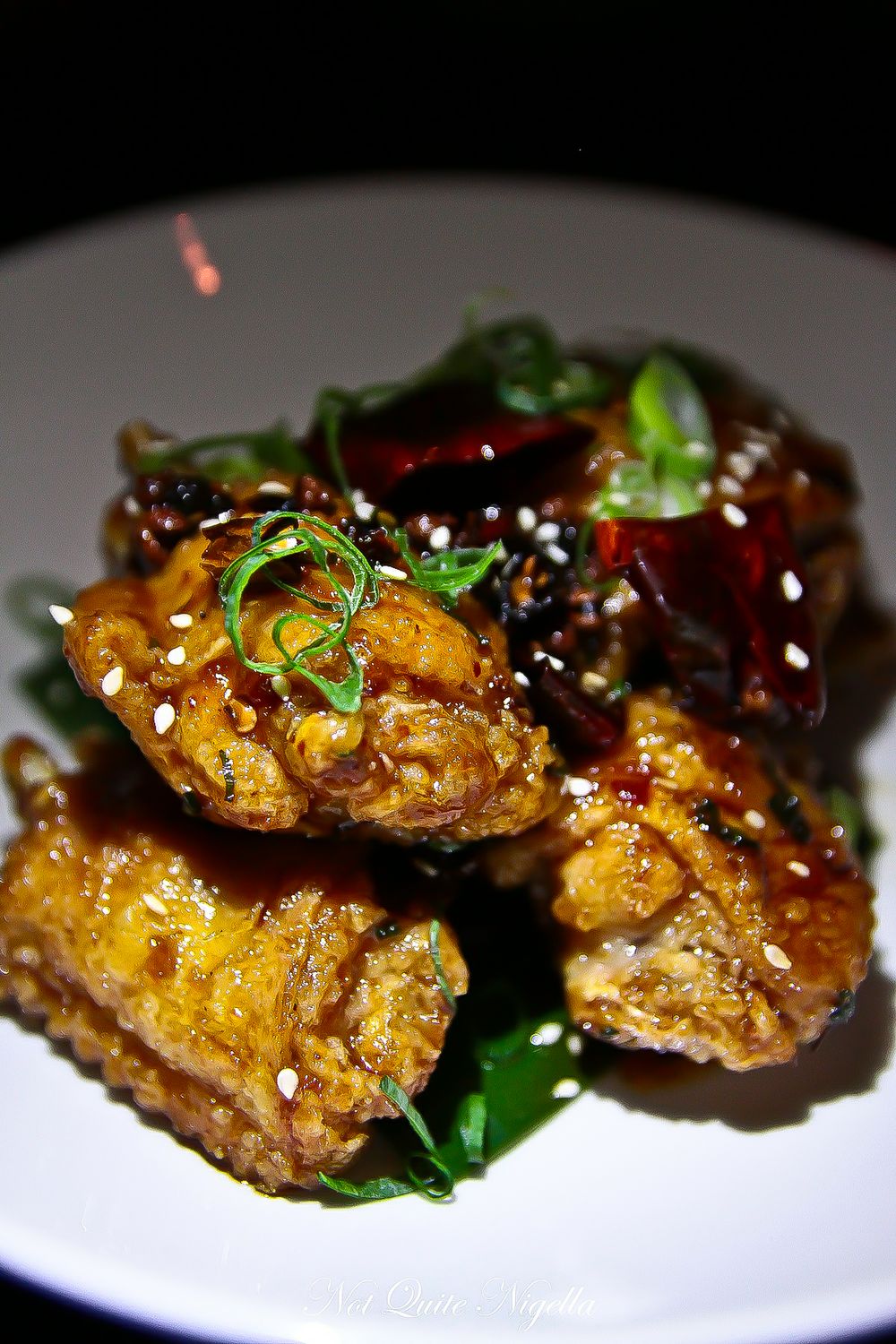 One of Gaynor and Ute's recommendations ended up being one of my favourite dishes. The sticky sweet chilli chicken wings are blisteringly hot with the skin melting on the tongue followed by the spice of Sichuan chillis. There were six of these to a serve and if I could have ordered more I would have. 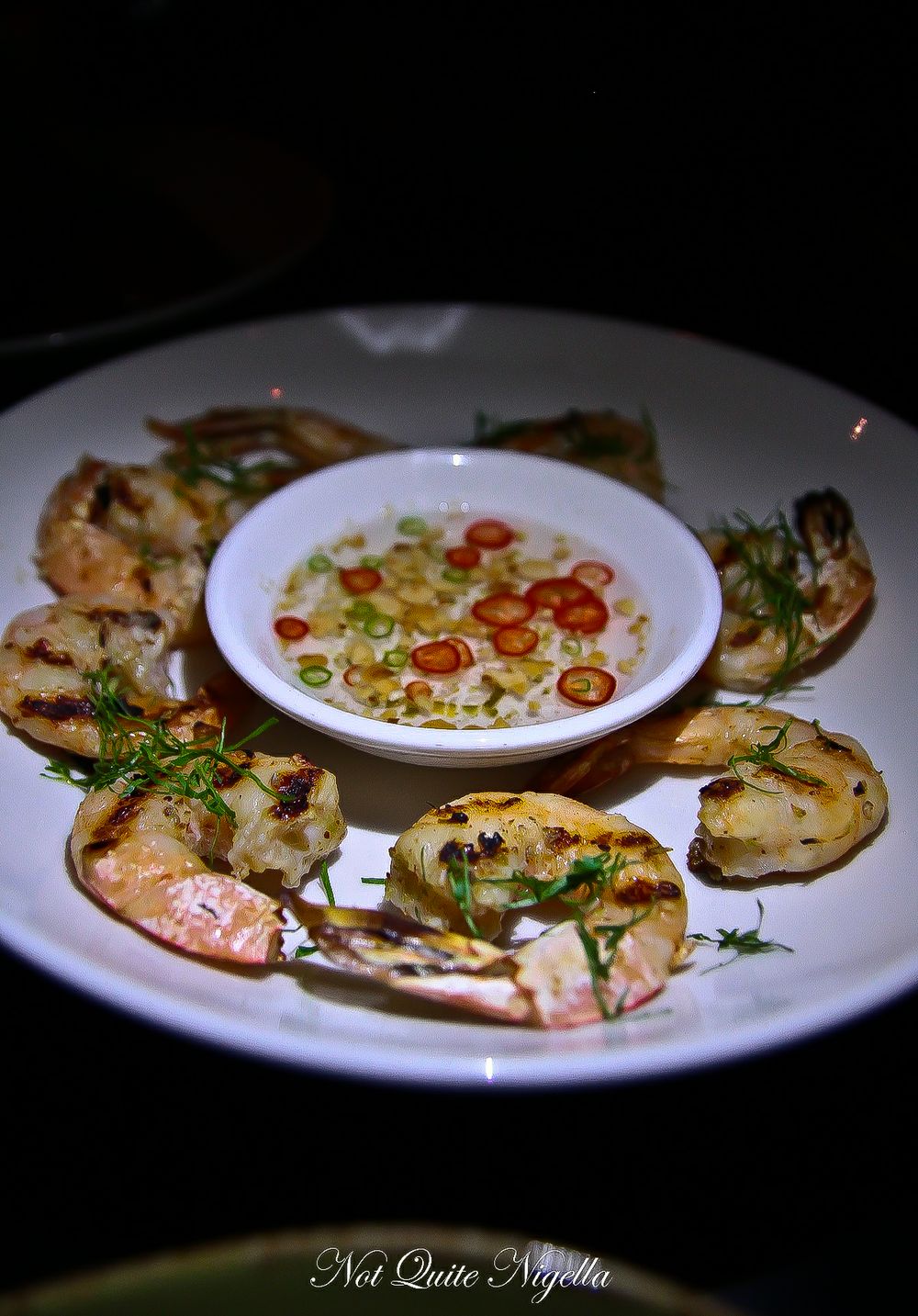 Light and succulent, this wasn't really what we were expecting presentation wise. They were peeled Crystal Bay prawns flavoured with coriander and lime with a chilli dipping sauce. Nice enough but not particularly remarkable. 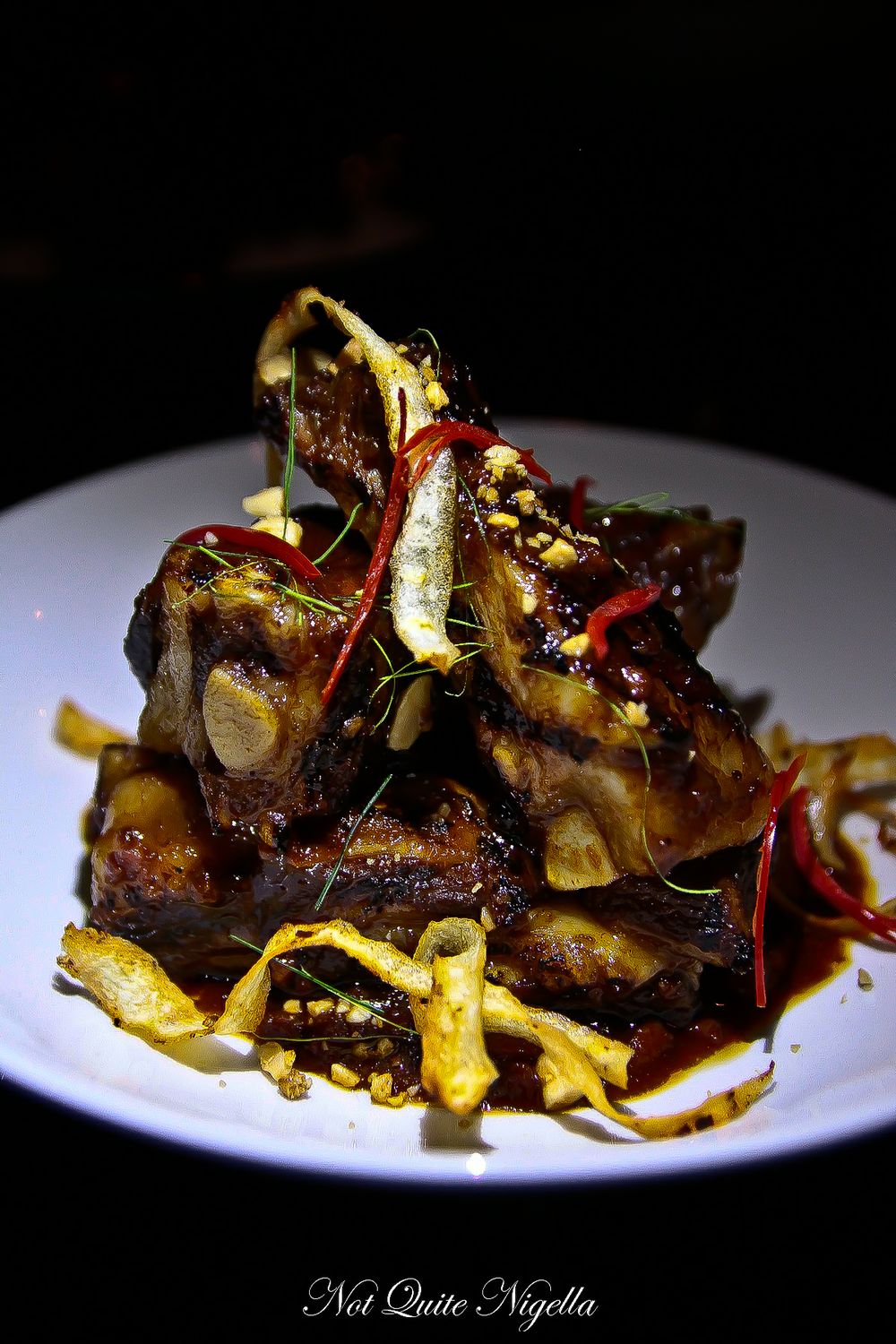 The thick lamb ribs sit on top of a thick, tangy sauce at the bottom that resembles a cross between a satay sauce and a dark, rich hoi sin sauce with crushed peanuts. The lamb ribs are fatter than I've had (more like a pork rib) and come four to a serve and are garnished with crispy parsnip chips. 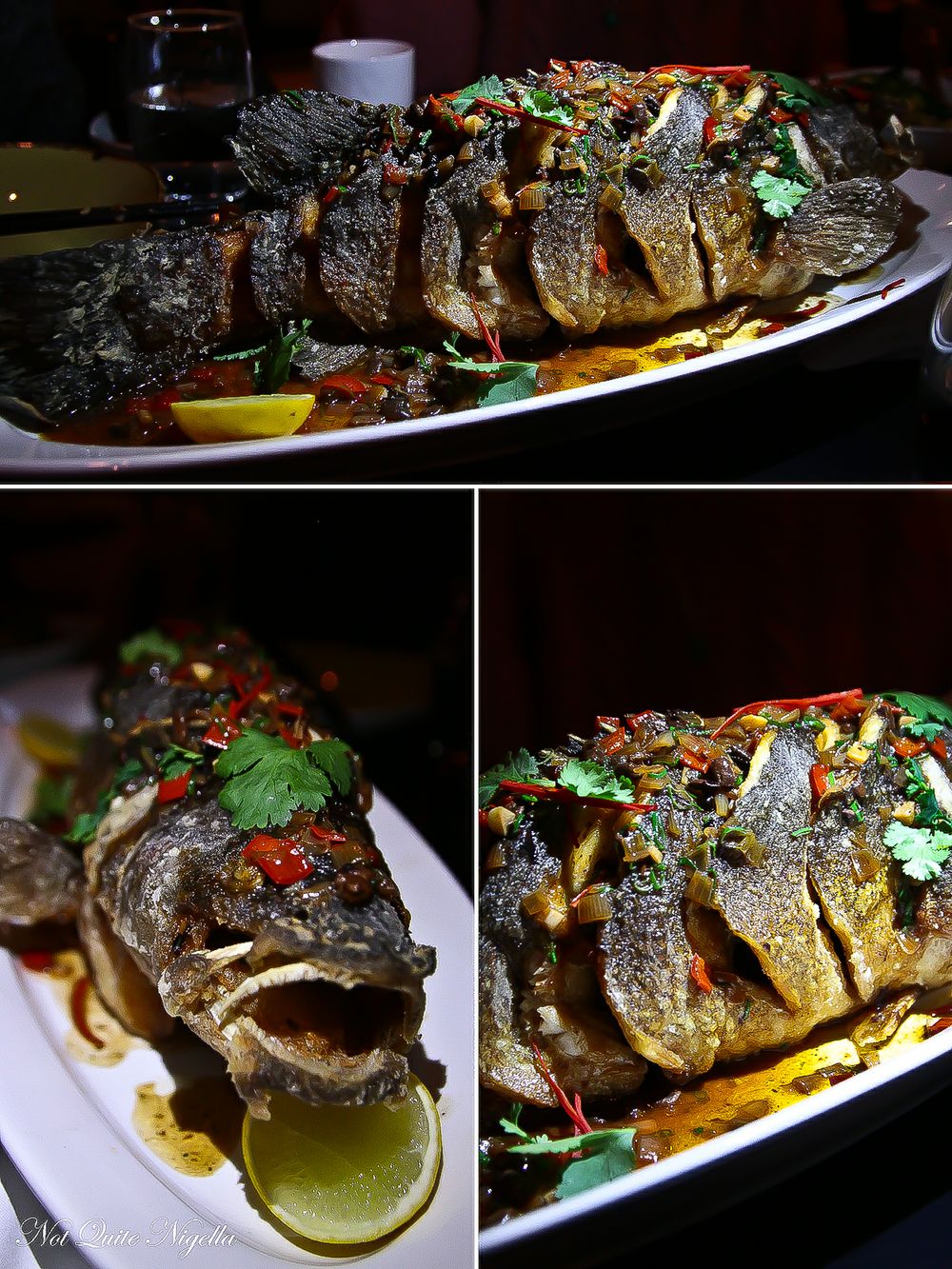 There was a large gap between entrees and mains, about 25 minutes worth and at this stage, the restaurant has started to get very full. People waited to be seated and our plates waited to be cleared and it looked like there weren't enough people on the floor that evening to cope with the customers as we watched our waiter whizz by in every direction. Our whole cod comes out with a flourish and it's a lovely eye catching specimen. They have cut the skin so that the flavours of black bean, coriander and chilli can penetrate through although the flesh is a little bland where the spice hasn't hit it so we dip those bits in the sauce. It's actually an enormous beast that could feed six as a main. We struggle to finish it all although Mr NQN comes in and hoovers it all up. 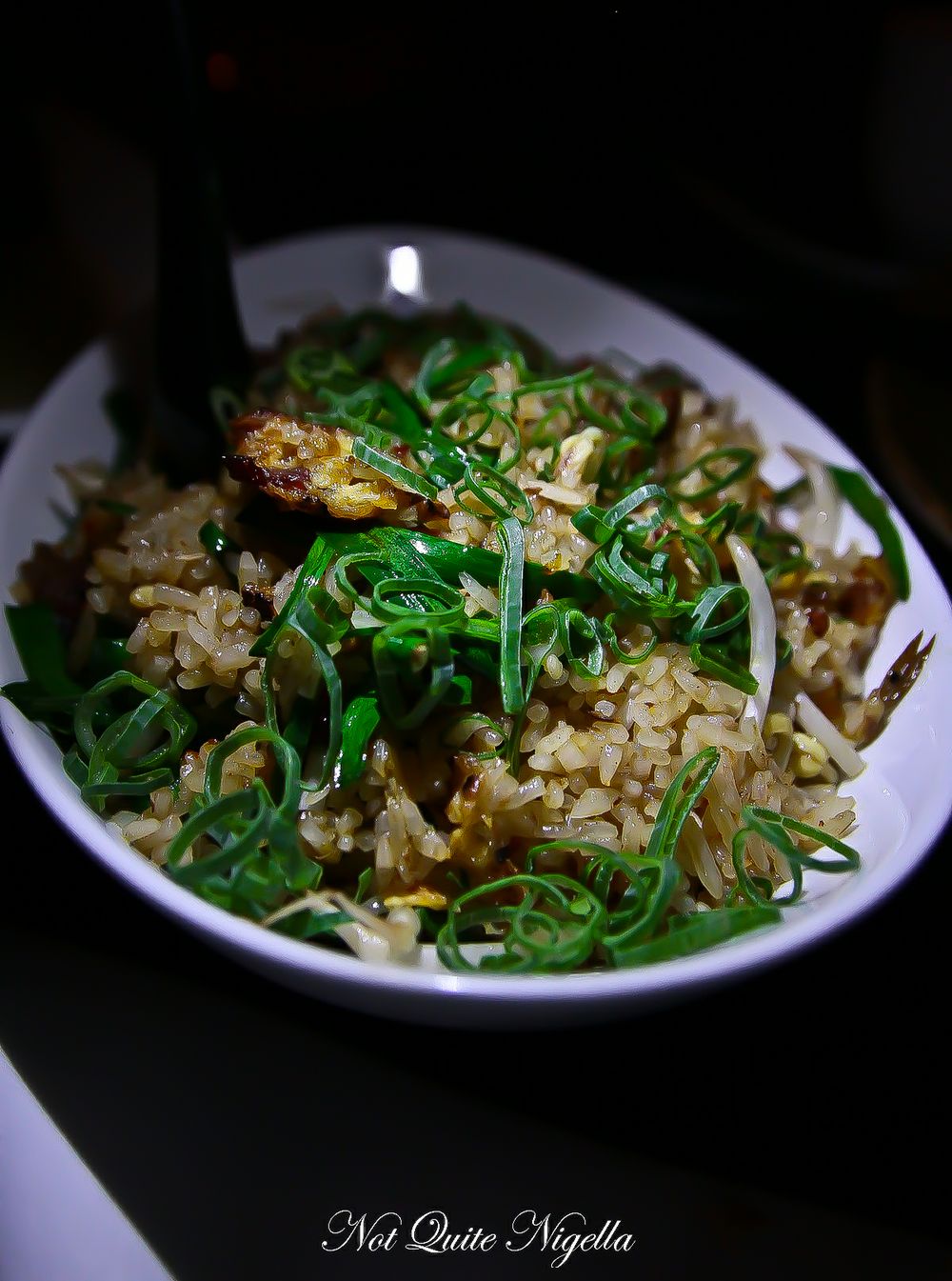 This wasn't too bad although there wasn't much char siu in this dish. The fried rice had a good breath from the wok but it also needed some more seasoning. 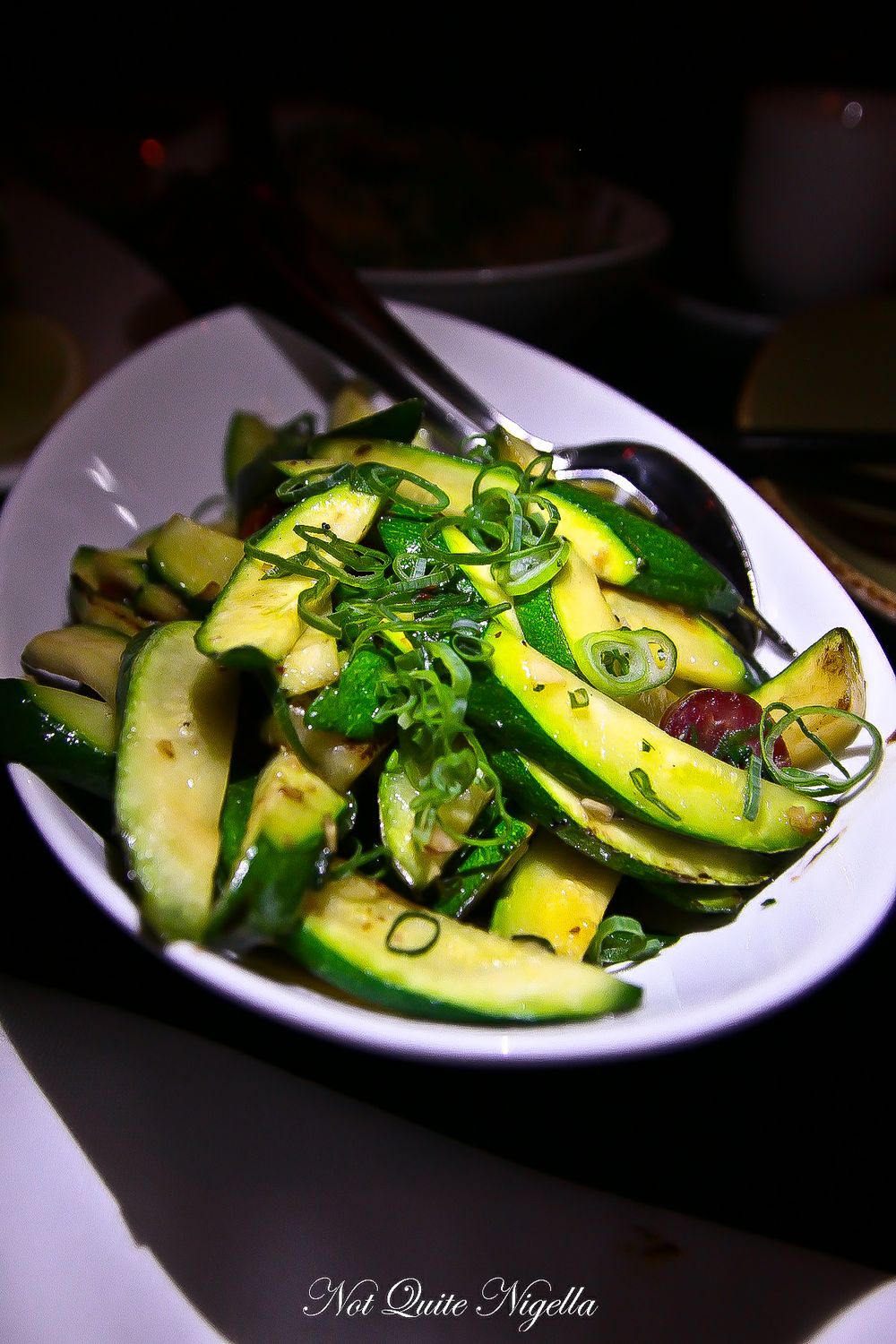 This dish was sadly a real disappointment with a woefully small amount of lup cheong sausage. The flavour was all in the lup cheong and the sauce which sat at the bottom of the bowl. Zucchini which really isn't an ingredient that you see in Chinese or Asian cuisine was an odd choice and it was mainly ordered because we love lup cheong. 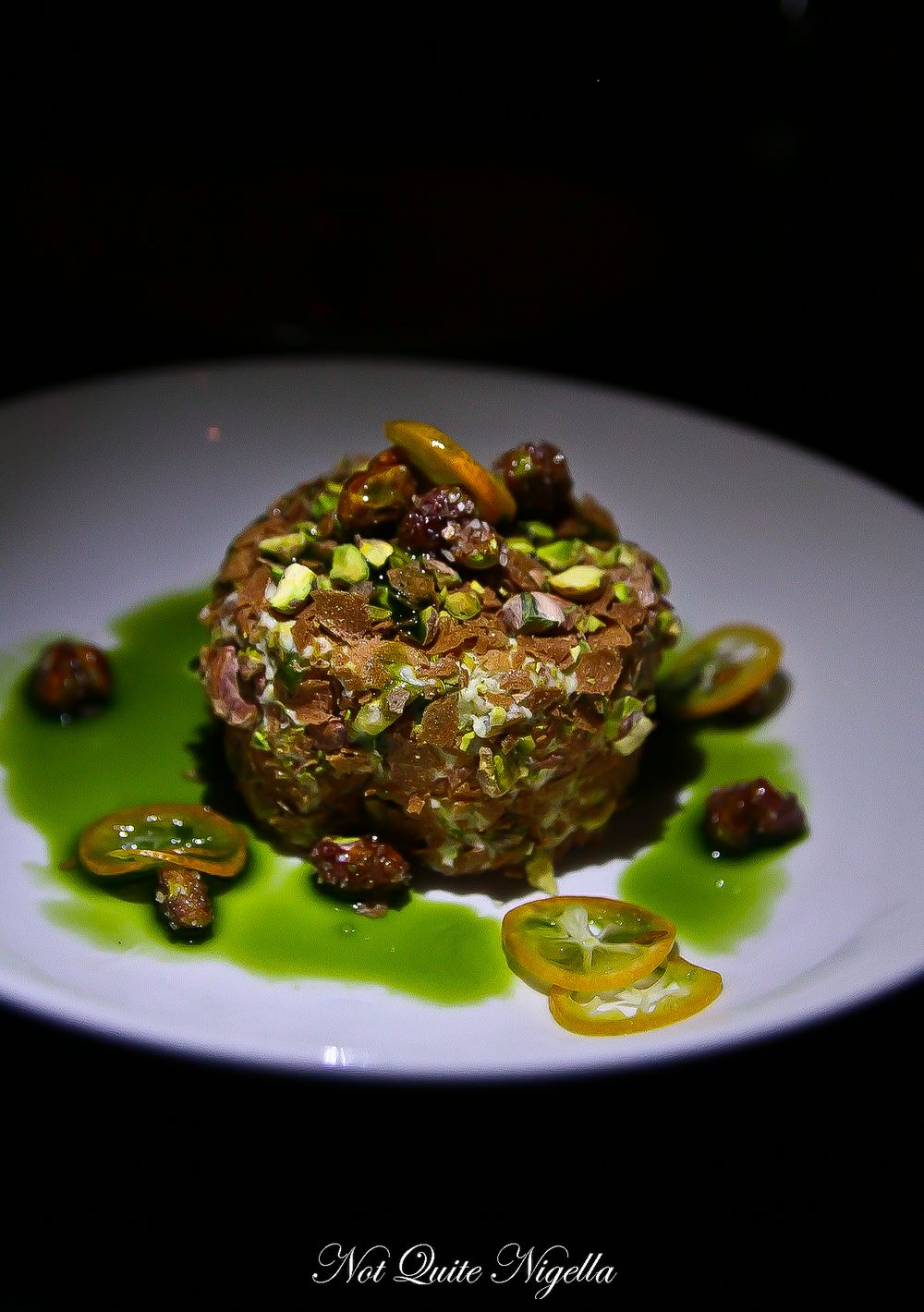 The disappointment with the zucchini dish was put aside with a triumphant dessert. This was another Ute and Gaynor recommendation and they were spot on. It was a round of pistachio and lemongrass parfait coated in a mix of feullitine and crunchy chopped caramelised almonds and pistachios and surrounding it was an aromatic bright green pandan syrup. There were some thin sliced cumquats surrounding it and it was the kind of dessert, like the wings that you could order over and over again.

And the question that many people are asking? How does this compare to Mr Wong? Both would be good for a business lunch and it's a bit hard to compare the two as I mostly tried the dumplings at Mr Wong while we had more main dishes here. Mr Wong is enormous and with a mostly hipstery crowd while China Lane is smaller with a mix of patrons. 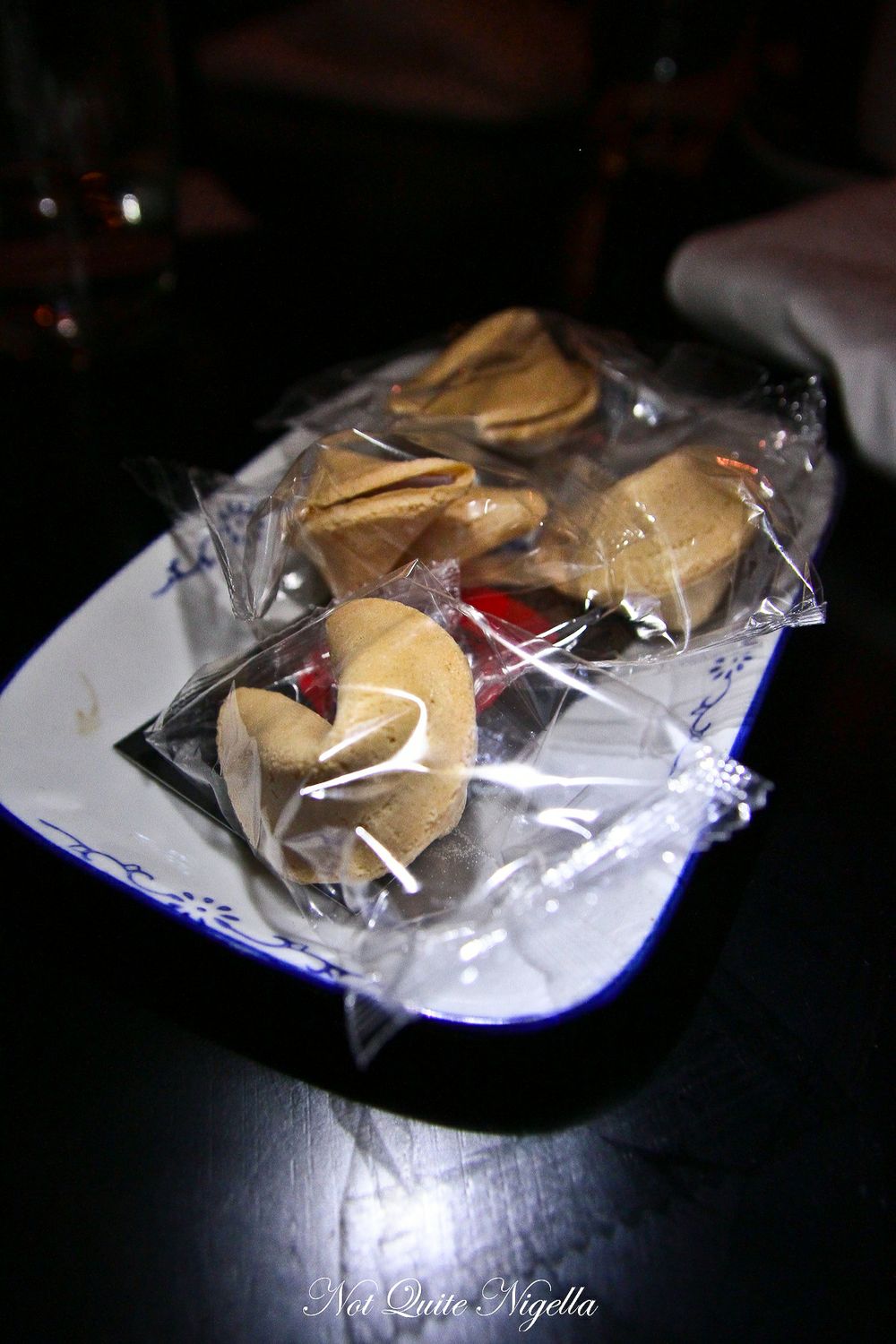 Some fortune cookies come with the bill. My father pops his into his pocket telling us "I'm saving it for later" while the rest of us open ours. They're a mix of positive messages, like the Chinese version of affirmations-mine tells me that "my kindness and generosity will be appreciated by others." I don't know what my father's said but it was perhaps "a Chinese chef doesn't always have to be Chinese."

So tell me Dear Reader, do you think that a chef has to be from the nationality to cook well? And do you check ahead of time if a restaurant will suit your dining companions or do you tend to wing it? 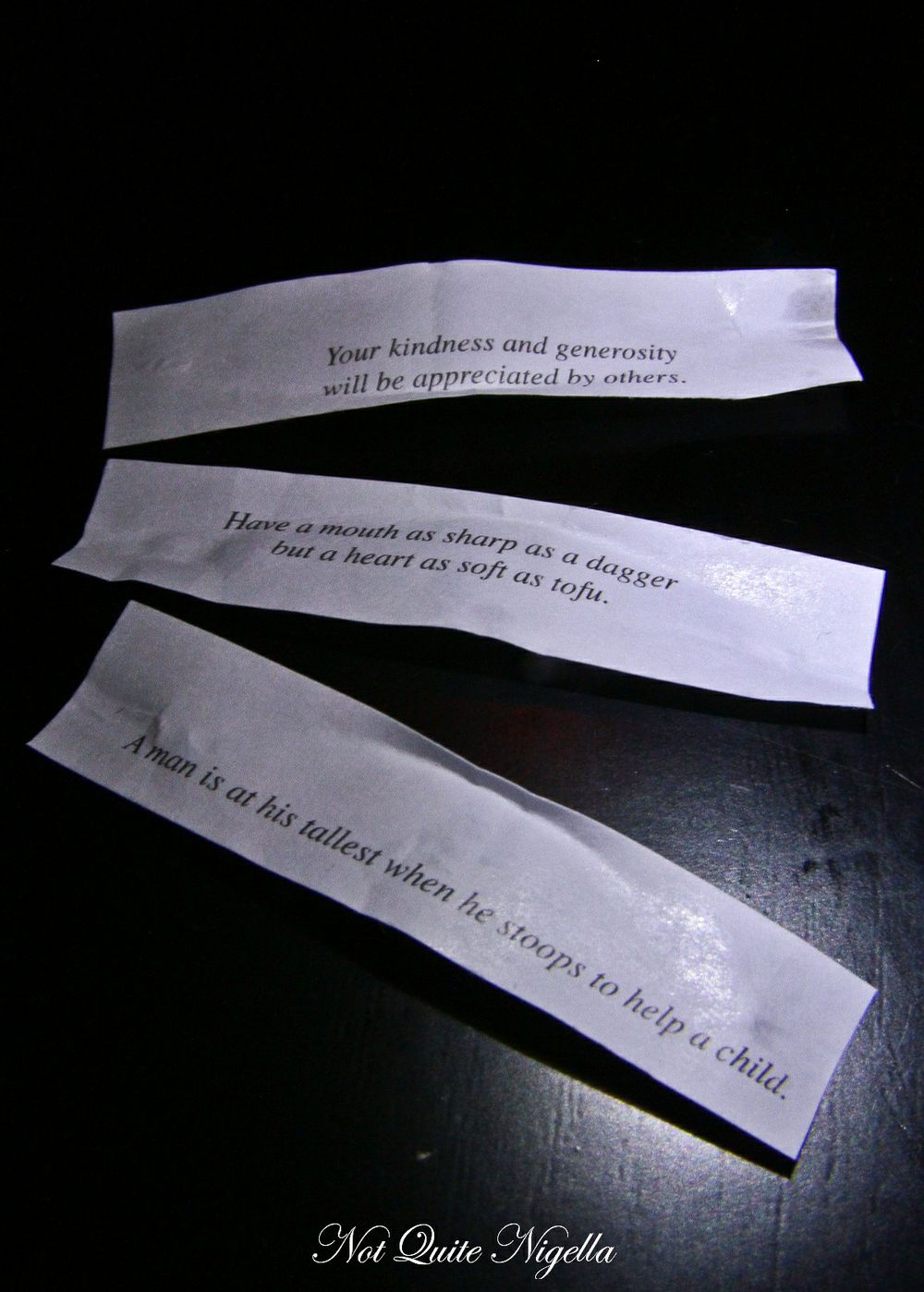