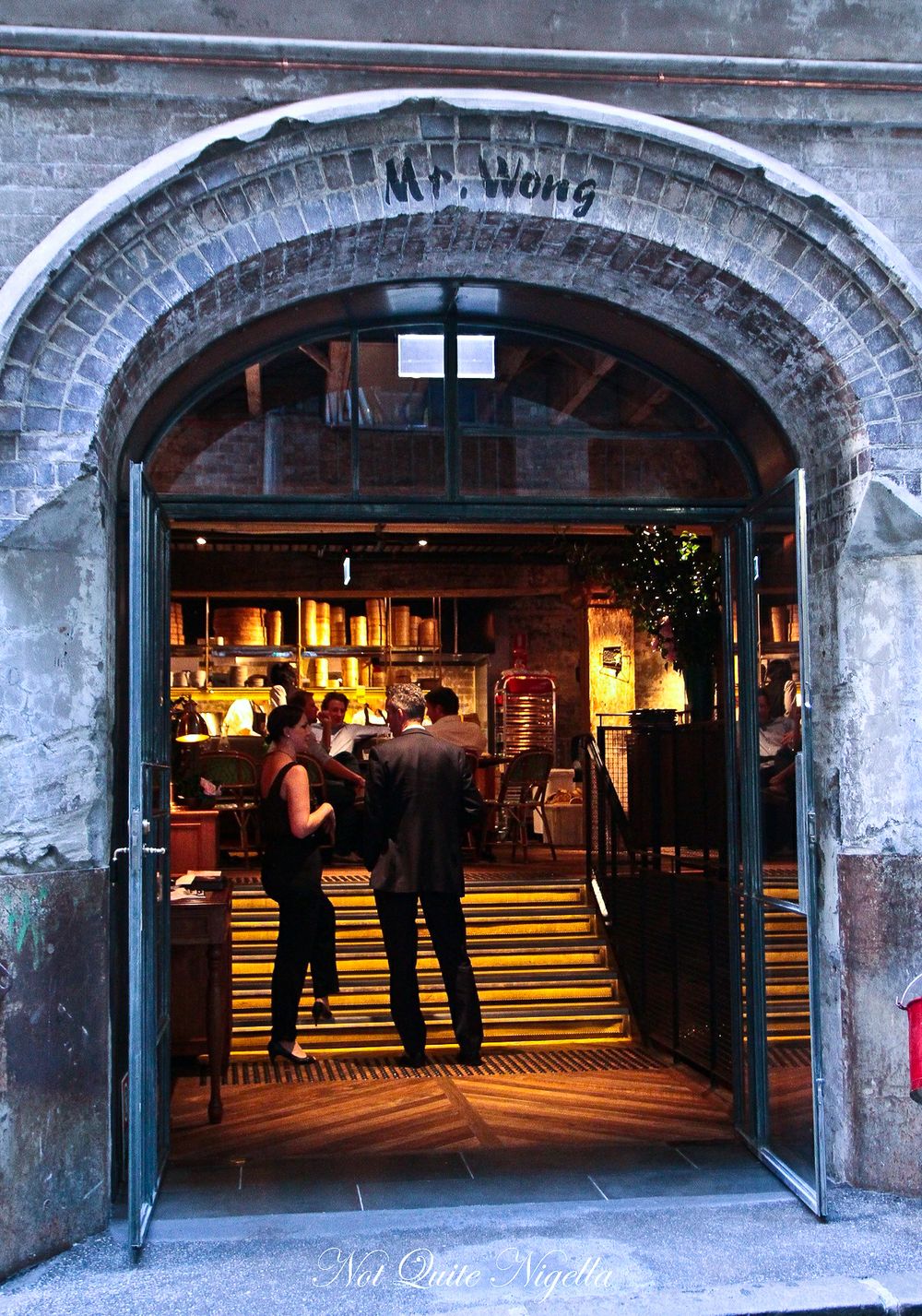 Back when Oprah used to be on television, she had a series of shows on how to get what you want in life. My wants are fairly basic.  Apart from food, shelter, affection and world peace, I only really wished for small, not so serious things. One thing that I used to wish for was food related: a range of good yum cha dumplings in Sydney beyond the usual range that you may find (which truthfully all seem like they were made from the same place). I longed for something like Hong Kong's Tim Ho Wan. 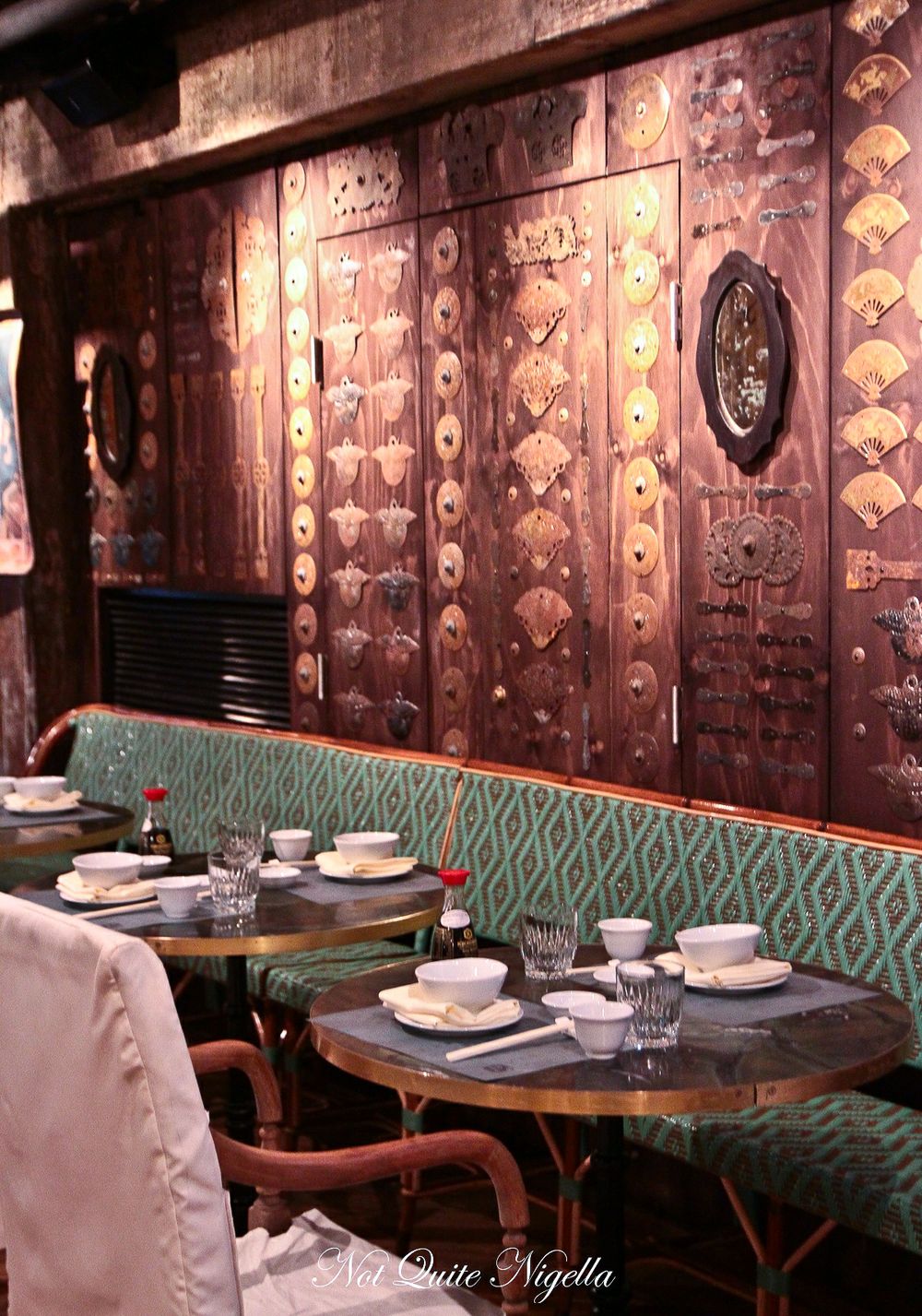 Patience delivered a new Chinese restaurant called Mr Wong. Part of the ever expanding Merivale empire it is headed up by Hakkasan's Erik Koh along with Ms G's Dan Hong and Jowett Yu. Lots of dollars later and a fit-out by Dreamtime Australia, the enormous two level space that seats 240 is buzzing and full this lunch time. The decor is about exposed walls, jade green floor tiles and placemats and an old school plastic coated Chinese menu. 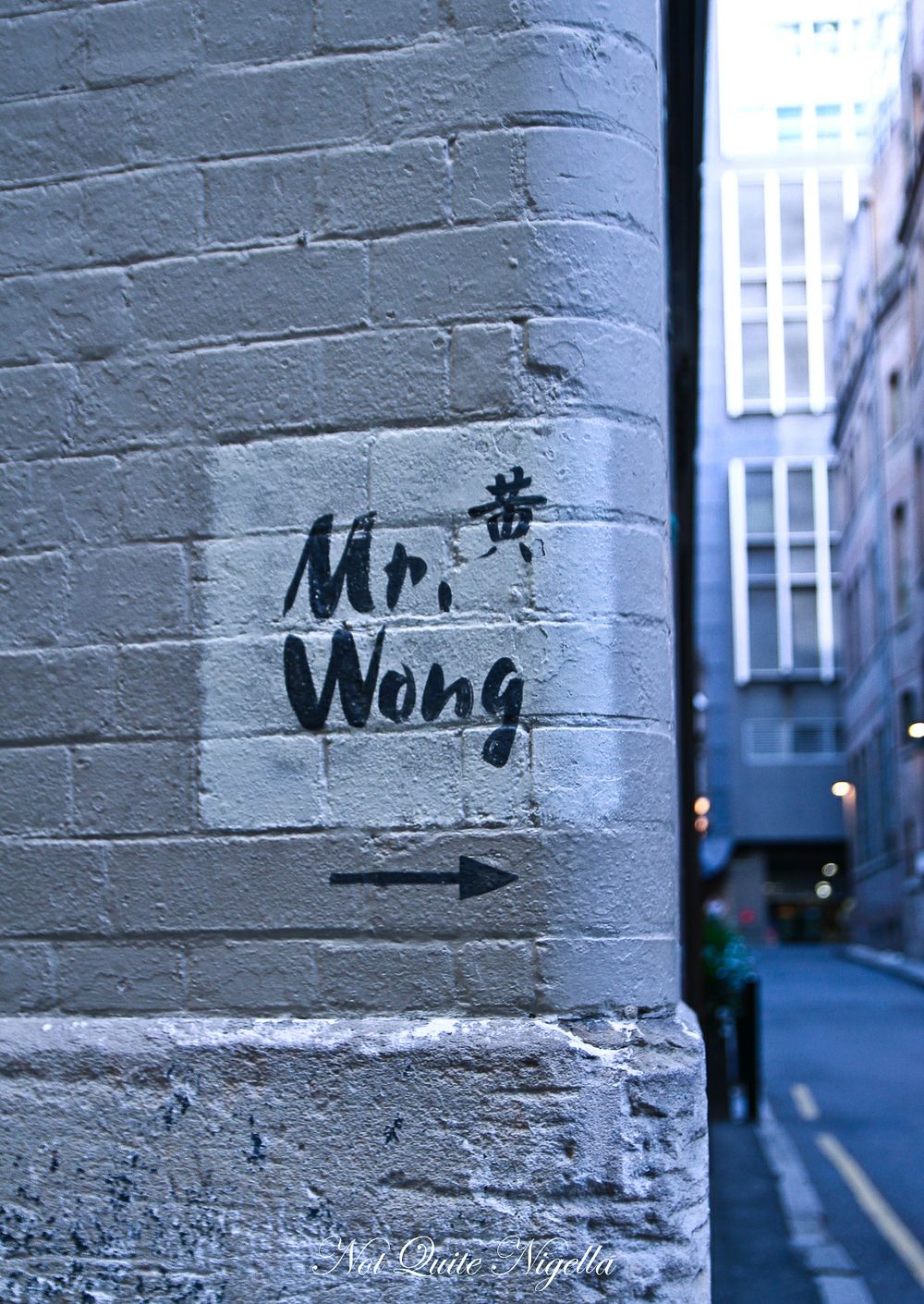 Getting there is like following a maze, well especially if you just put in Mr Wong into Google Maps in which case it will send you to Chinatown which is where I was when I rang Joan Holloway and had to confess that I was at the wrong Mr Wong-oops! A cab ride later, I was being deposited down the Tankstream Arcade at Bridge Lane, just off Bridge Street. There was a spray painted sign and I followed the girls in the spindly heels clutching heavy designer bags in the crook of their arms. Bookings can be made for lunch. However, for dinner, you can only book for tables of six or more. I understand no bookings policies for small restaurants but as Mr Wong seats 240 people, I'm not sure what the logic is there. 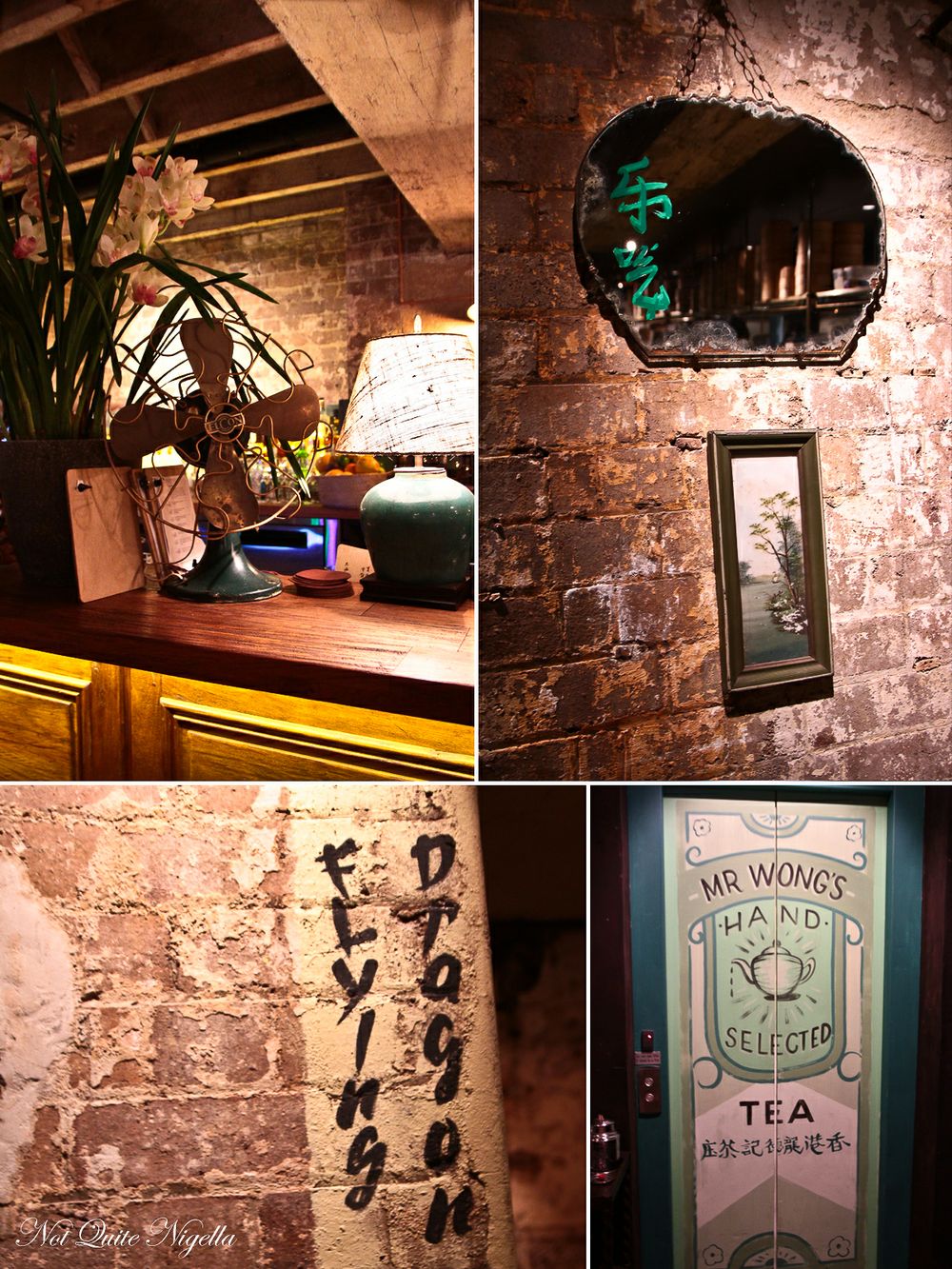 Joan Holloway waves from a table which is near one of the kitchens. There are two kitchens, both open plan; the one right in front of us and another kitchen which holds the ducks. Oh did I mention the wall of ducks? No? It's like China rather than Chinatown there are so many. The atmosphere at lunch time is very masculine and most diners are large groups of business men and Joan reports feeling a tad intimidated when she first walked in. 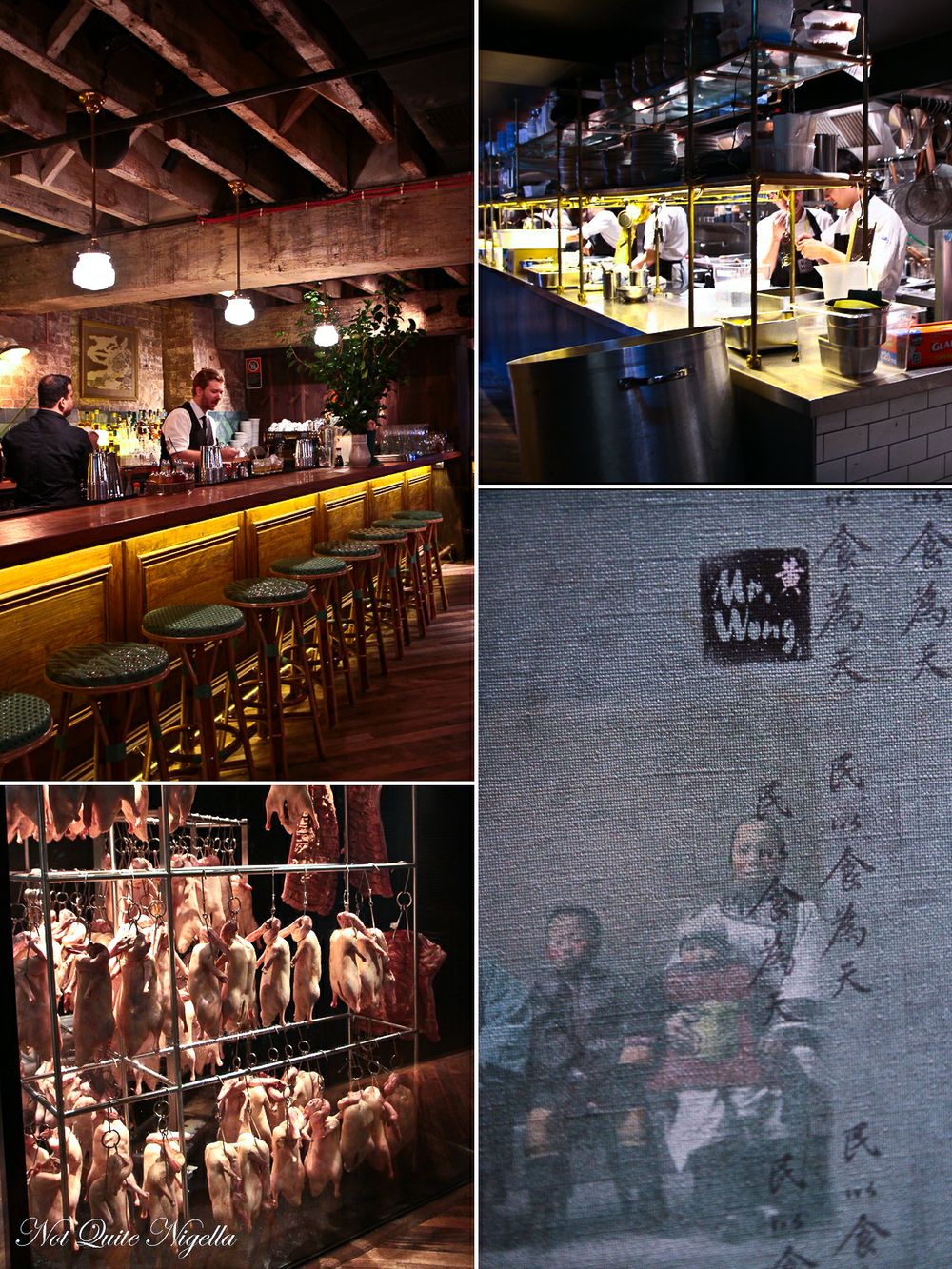 The steamers of dim sum are available at lunch time but there are dim sim platters at dinner. With a wave of her porcelain hand, Joan said "you should order, go crazy!" and I gladly acceded. We decided on a range of dim sum, some roast duck and some vegetables with some rice. All easier said than done and in rather ambitious quantities given the small size of our table and the fact that we were just two people. The service is very friendly and accommodating although one item ends up not turning up either on the bill nor the table. 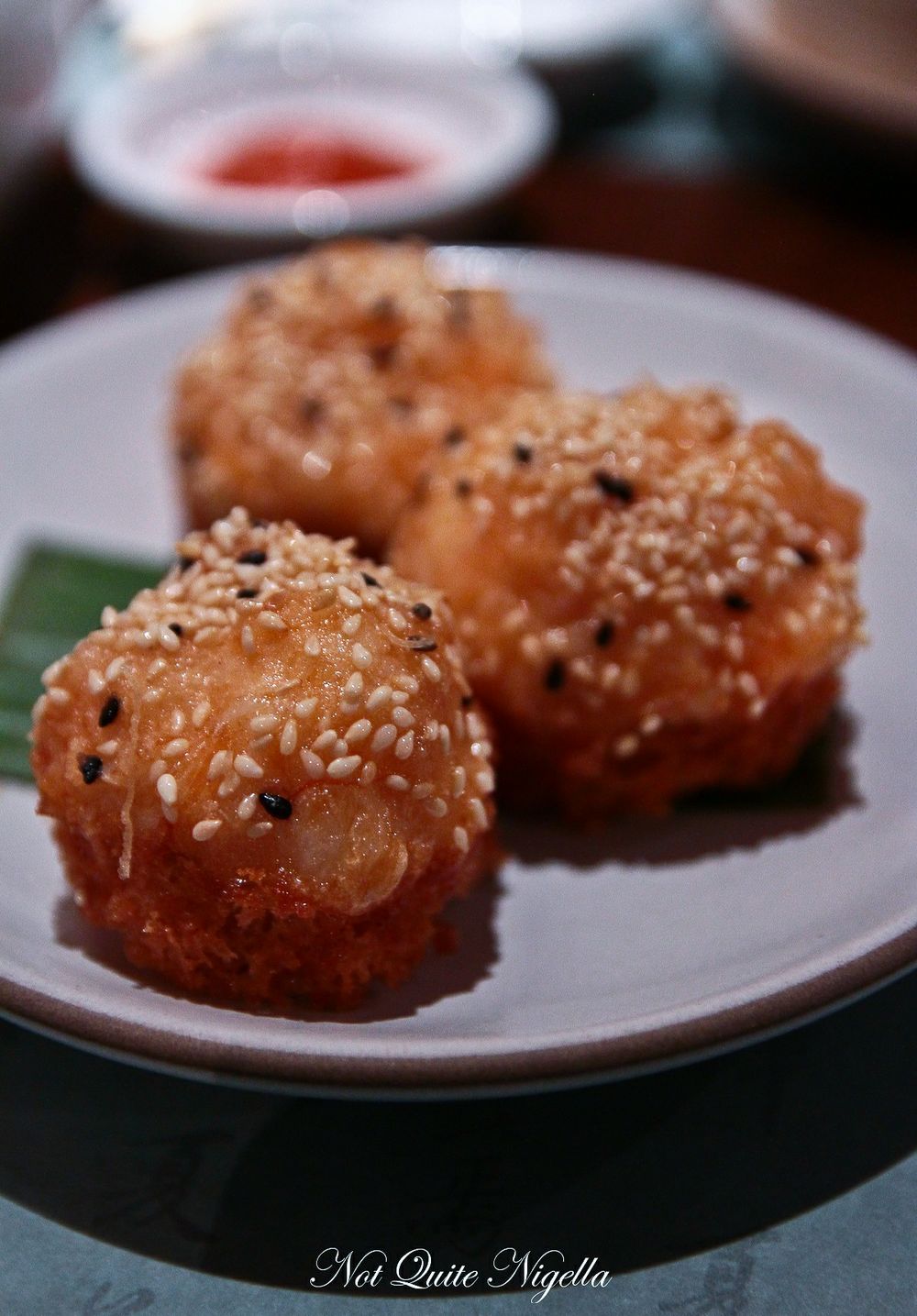 We've sip the tea and the dumplings come out quickly. I'm a sucker for prawn toast but combine it with foie gras and what do you get? A completely addictive little mouthful or two. The foie gras flavour is light and gives the prawn toast just that little added extra richness and a final coat of white and black sesame seeds. 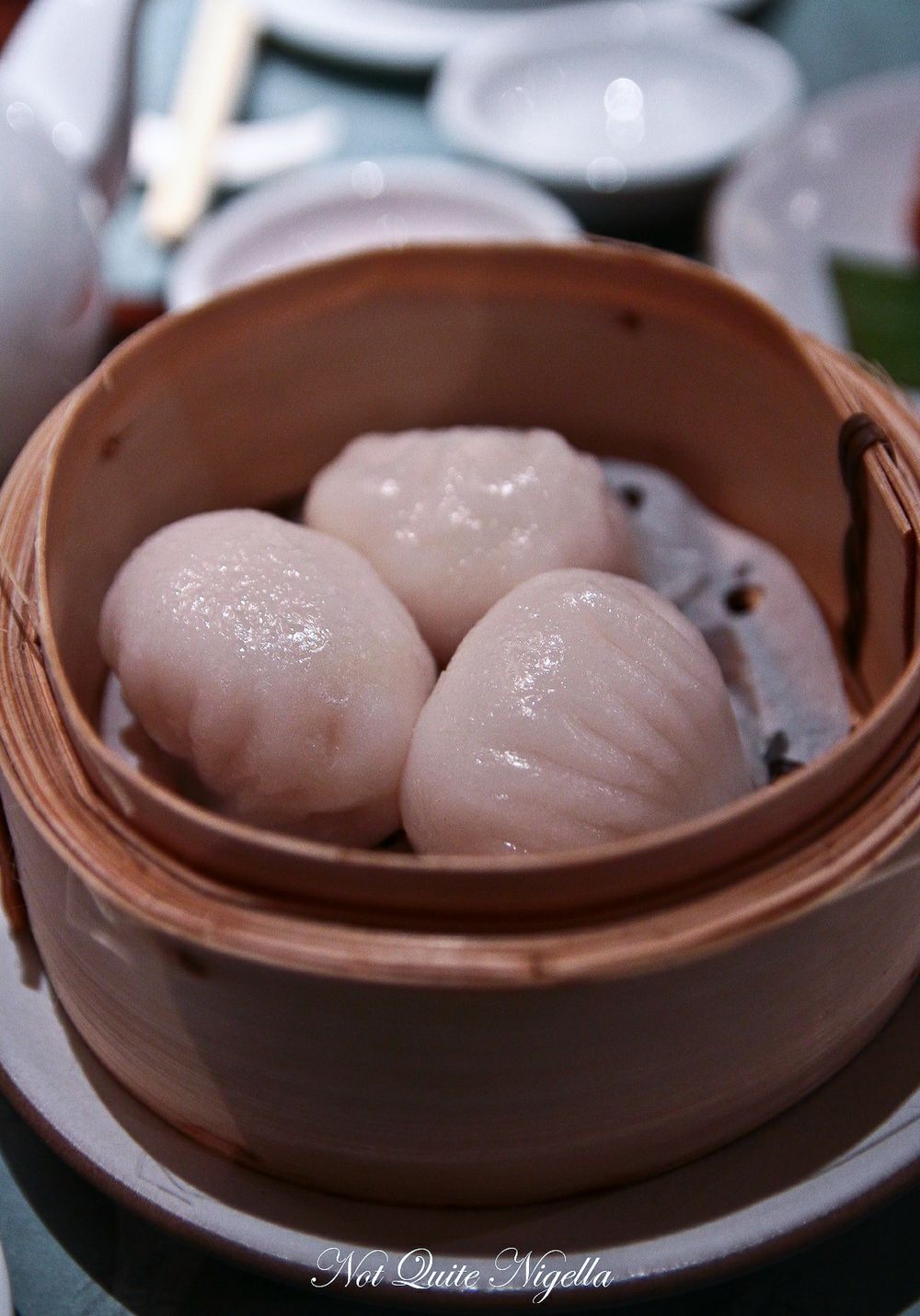 I ordered these as they are always a favourite but I should have perhaps gone for the more unusual dim sum. Nevertheless, the prawn har gaus are good, made with a paper thin skin and plump, fresh prawns. 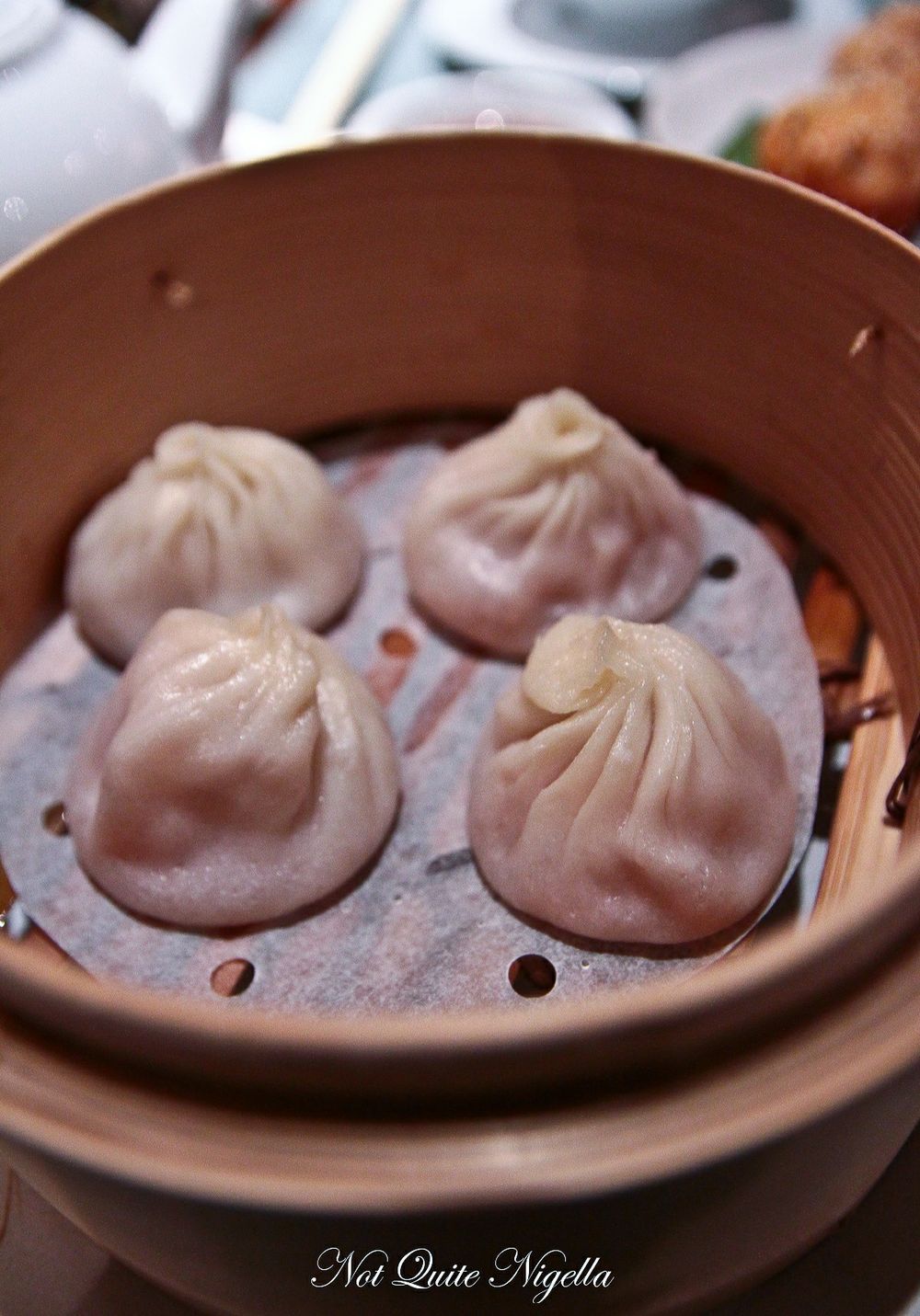 We're veering from the Cantonese morsels into Shanghai territory. The xiao long bao come four to a serve and are pleasingly full of hot soup. Just nip at the corner of one and drink the soup out. 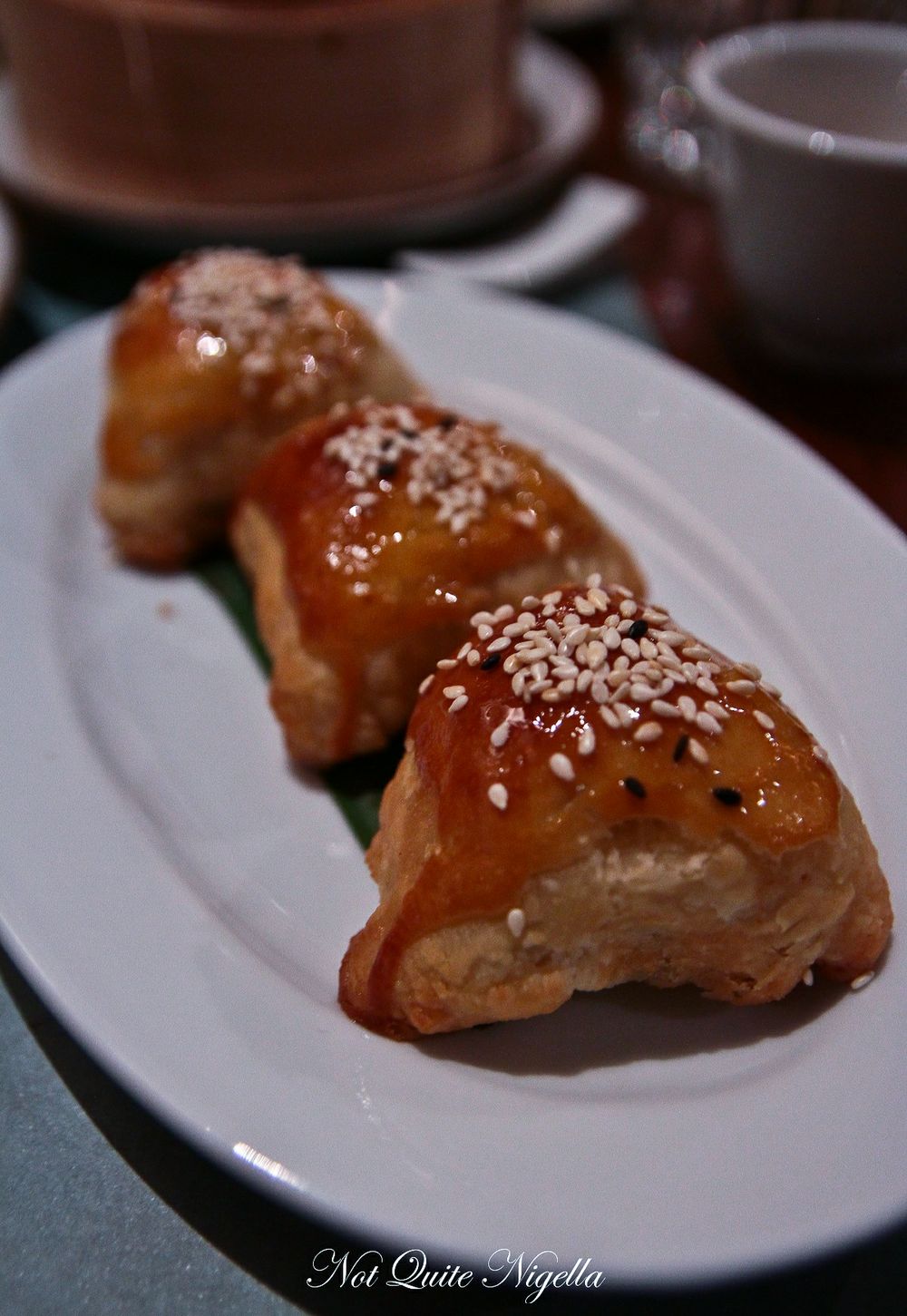 Even though Joan and I both generally prefer steamed dumplings, this and the prawn toast were two of our favourites. Normally, a char siu triangle, this venison version is filled with slow cooked, softly textured venison meat covered in a flakey short pastry outer. 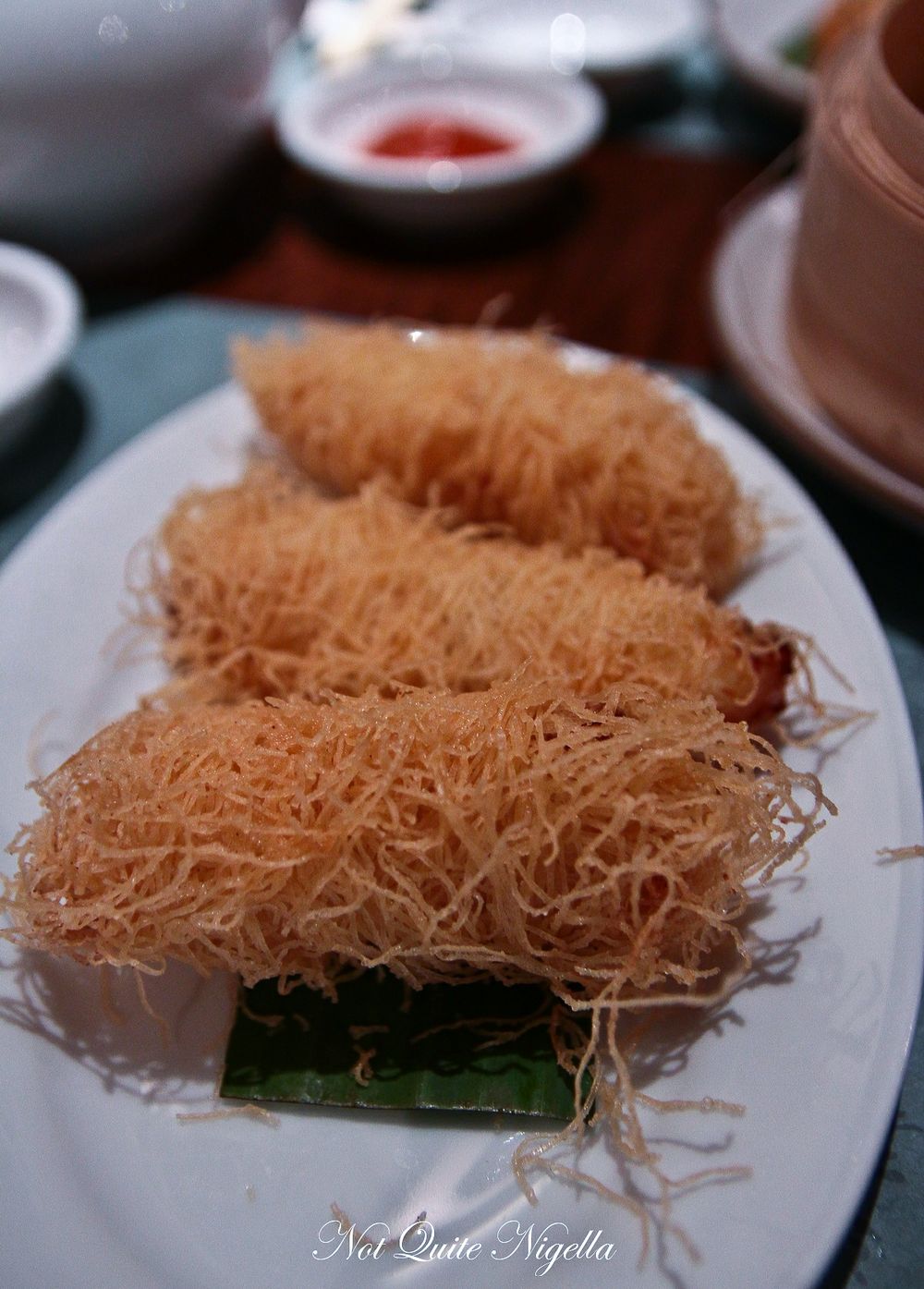 The lobster mei si roll is a deep fried morsel covered in fine noodles. It's nice but hard to eat without getting shards of noodle everywhere and it seems mostly made up of noodle with a small centre of lobster. 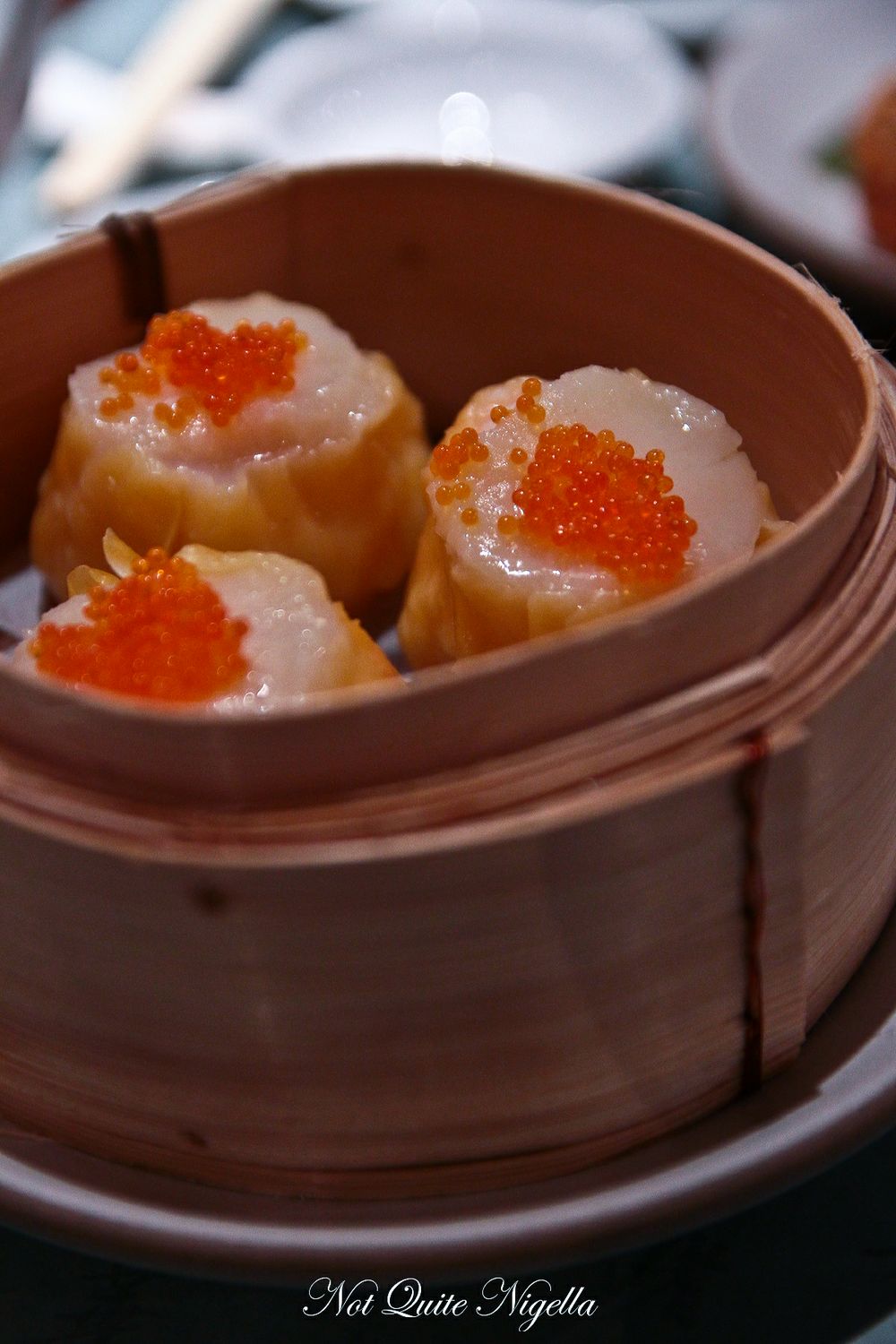 The scallop and prawn shumai are lovely, springy, spongey little numbers with prawn meat and a whole scallop on top and tiny poppable dots of roe. And although the dumplings are more expensive than what you would find in Chinatown, this along with Spice Temple are places that you could do a nice, long leisurely business lunch with good service and the ability to book ahead. Just shout a little as it's quite noisy 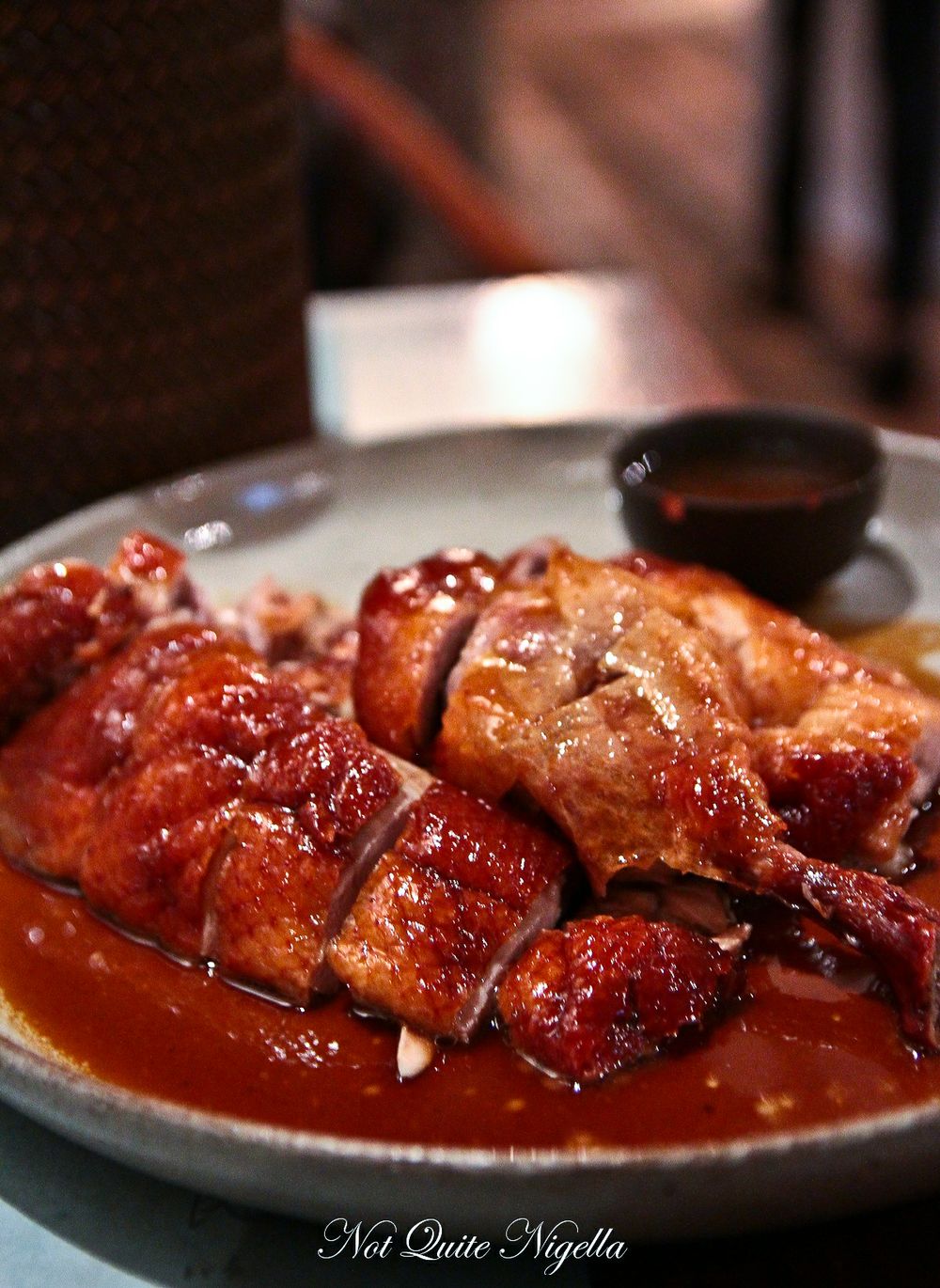 By the time this arrived, I was already quite full from the dumplings but it's funny how the stomach finds the space for roasted duck served with a sweet plum sauce. The duck is plump with plenty of fleshy dark meat and juicy skin. A nice touch was that when we couldn't finish it as it was such a big serve, they offered to pack it up takeaway for us. 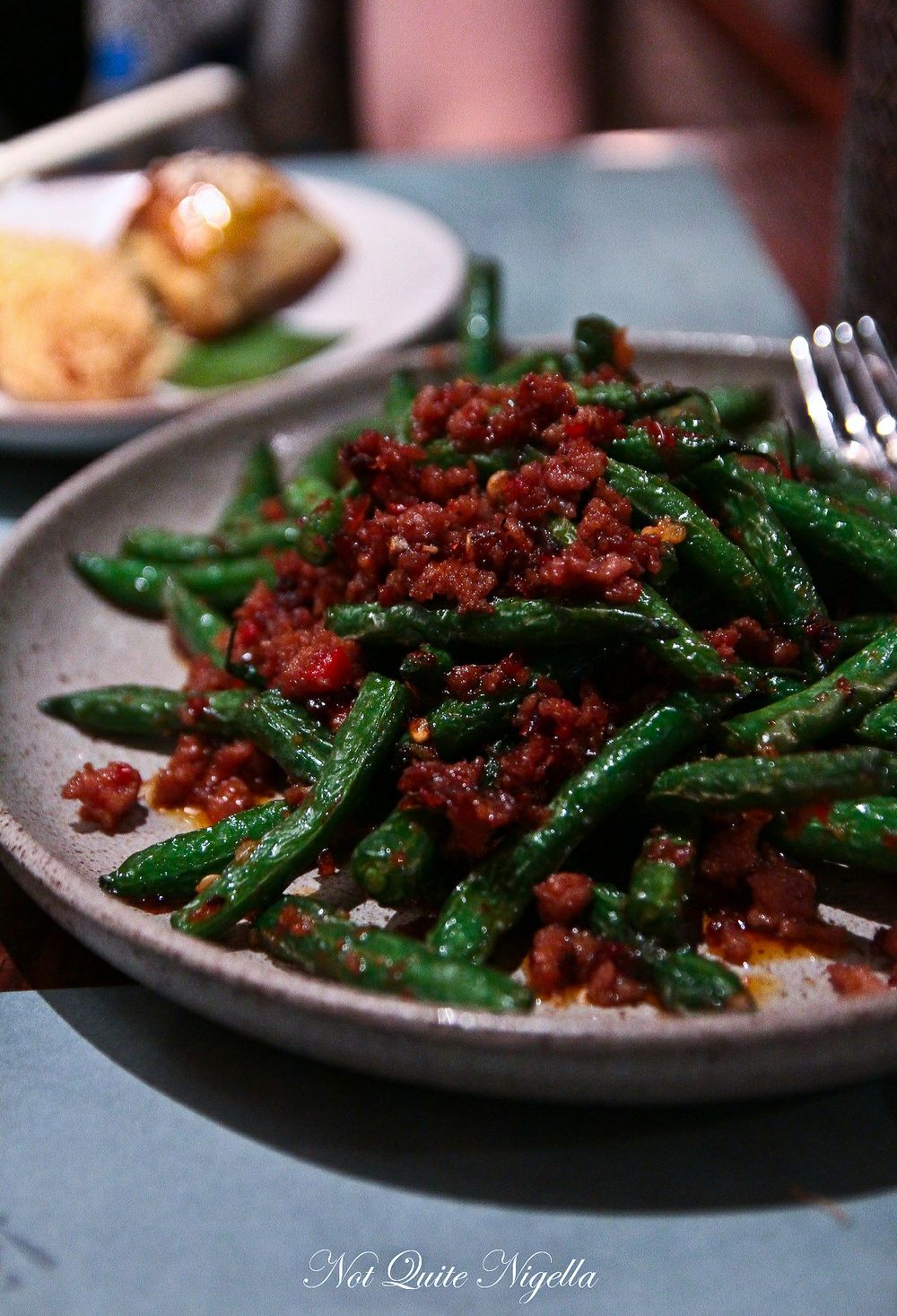 The green beans are paired with a generous amount of pork mince and a spicy XO sauce. It's almost a dish in itself rather than a vegetable side dish and it has a good balance of flavours to it. 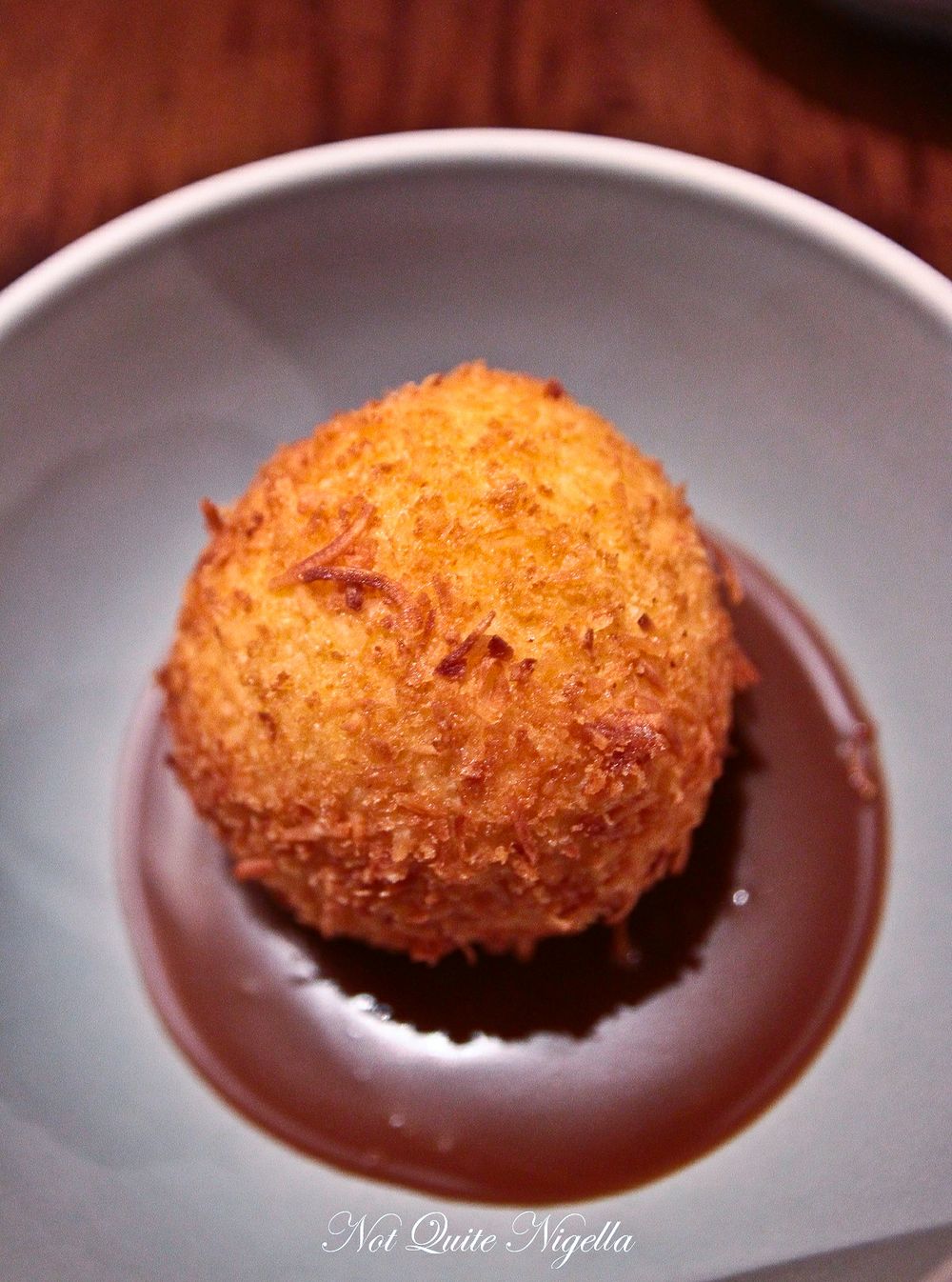 Dessert time! After uming and ahing over the dessert menu - to scoop or not to scoop the deep fried ice cream or go for one of Dan Hong's desserts, we finally went with the deep fried ice cream as curiosity got the better of us. The vanilla bean ice cream scoop was covered with Japanese panko crumbs and coconut, the coconut giving most of the flavour. It came with a choice of butterscotch sauce, vanilla or chocolate and we opted for the thick butterscotch. And whilst it was good, I think that we should have gone for one of the other desserts.

So tell me Dear Reader, do you prefer steamed or fried dim sum? And what do you think of no bookings policies? Do you mind them or does it not bother you? 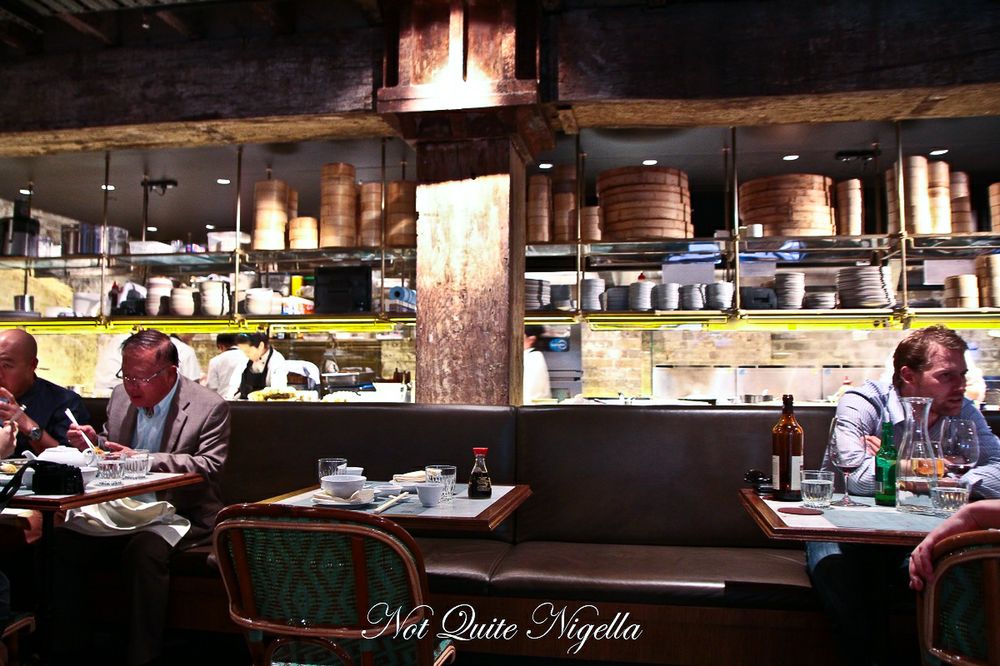