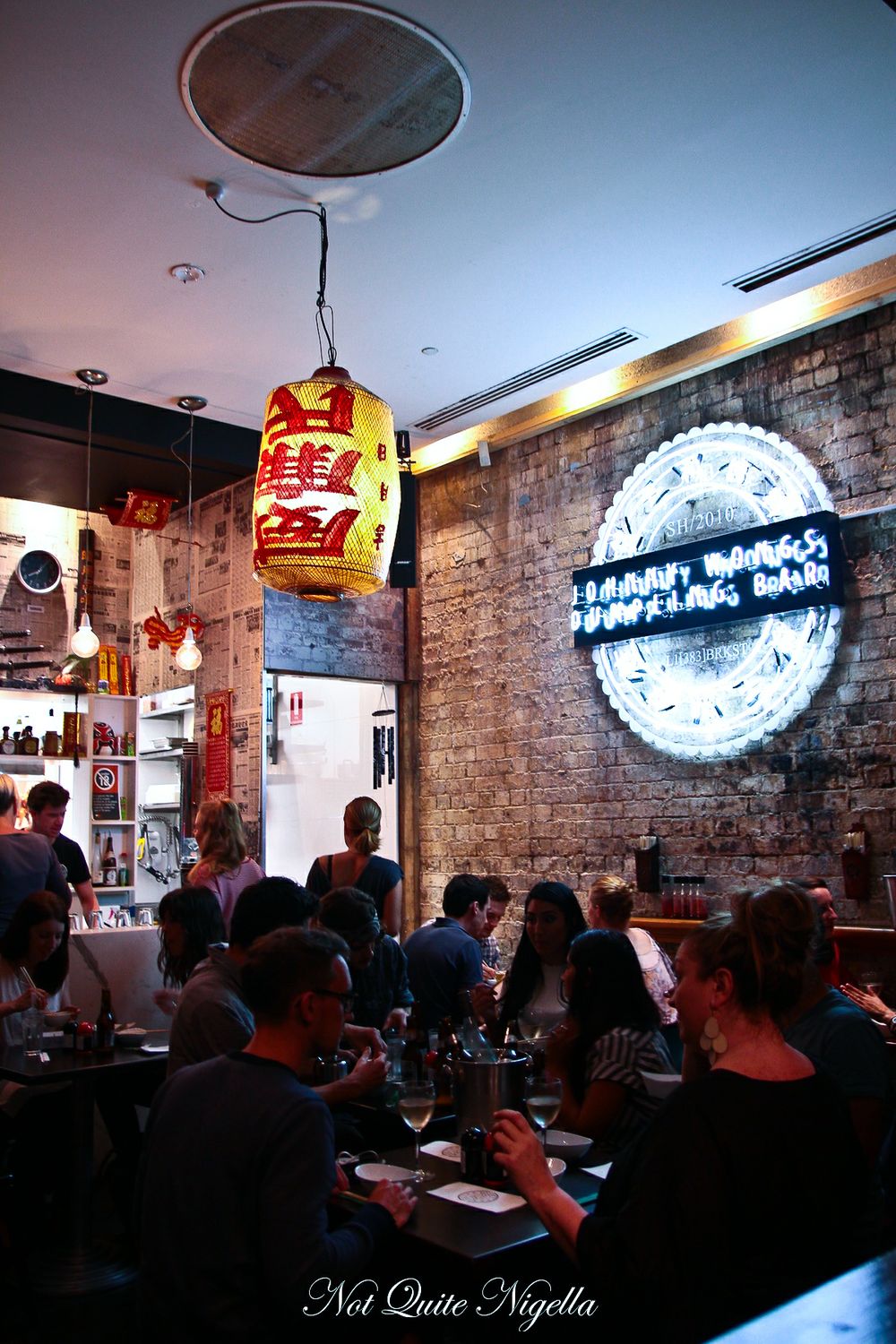 I texted my friend Ute as I was heading out the door.

"And I'm 1 minute early. I'll go for a wander" she texted back immediately.

I reached Taylor Square breathless. It seems that I'm always late to meeting Ute who in her Germanic fashion is always on time or early. The neon sign for Johnny Wong's Dumpling Bar isn't lit but I follow the sound of the noise and feet upstairs for what they call Wong Tang Wednesdays where dumplings are $1 each. The space is small but fits many and the walls are plastered with Chinese newspapers. I note that we're sitting next to the personals section which has provided Ute with much entertainment while she has been waiting. 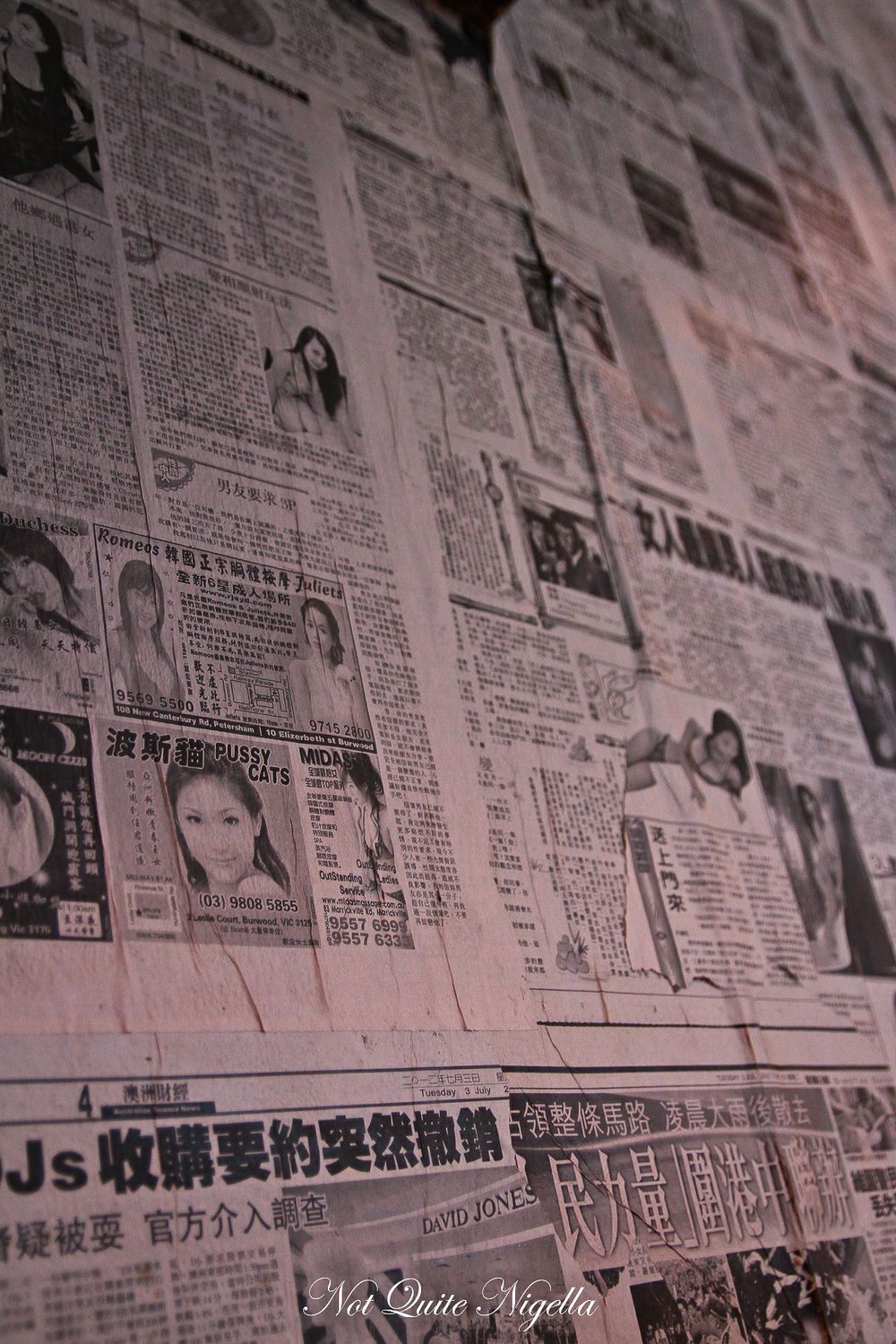 There's a chalkboard menu on the wall and ordering and payment is done at the counter. About two thirds of their dumplings are made for them by a "dumpling master" who comes in once a week. The others are contracted out while the salads are made in house. The prices, well they'll never beat Ashfield's prices but then again rents are higher here. The crowd, well you guessed it. In this neighbourhood, they're hipsterrific and the atmosphere is buzzy. The turnover for some diners is fast-they get a few trays of dumplings before they're gone while other tables linger a bit longer. 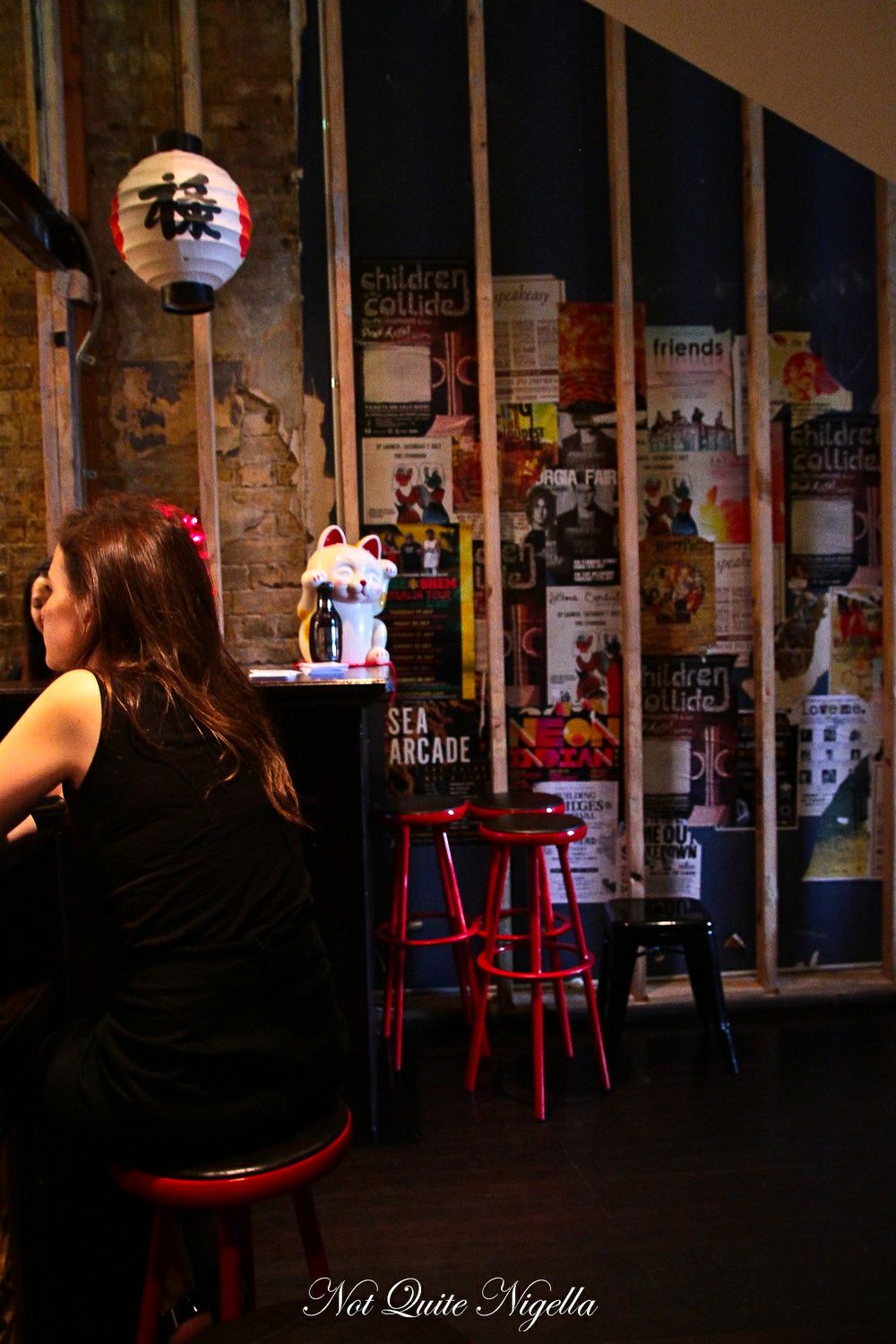 Ute goes to order at the counter where the three clocks behind show times in Shanghai, Hong Kong and Taipei. A sign tells you that you are going "the Wong way" and just after she returns from ordering, our food hits the table. 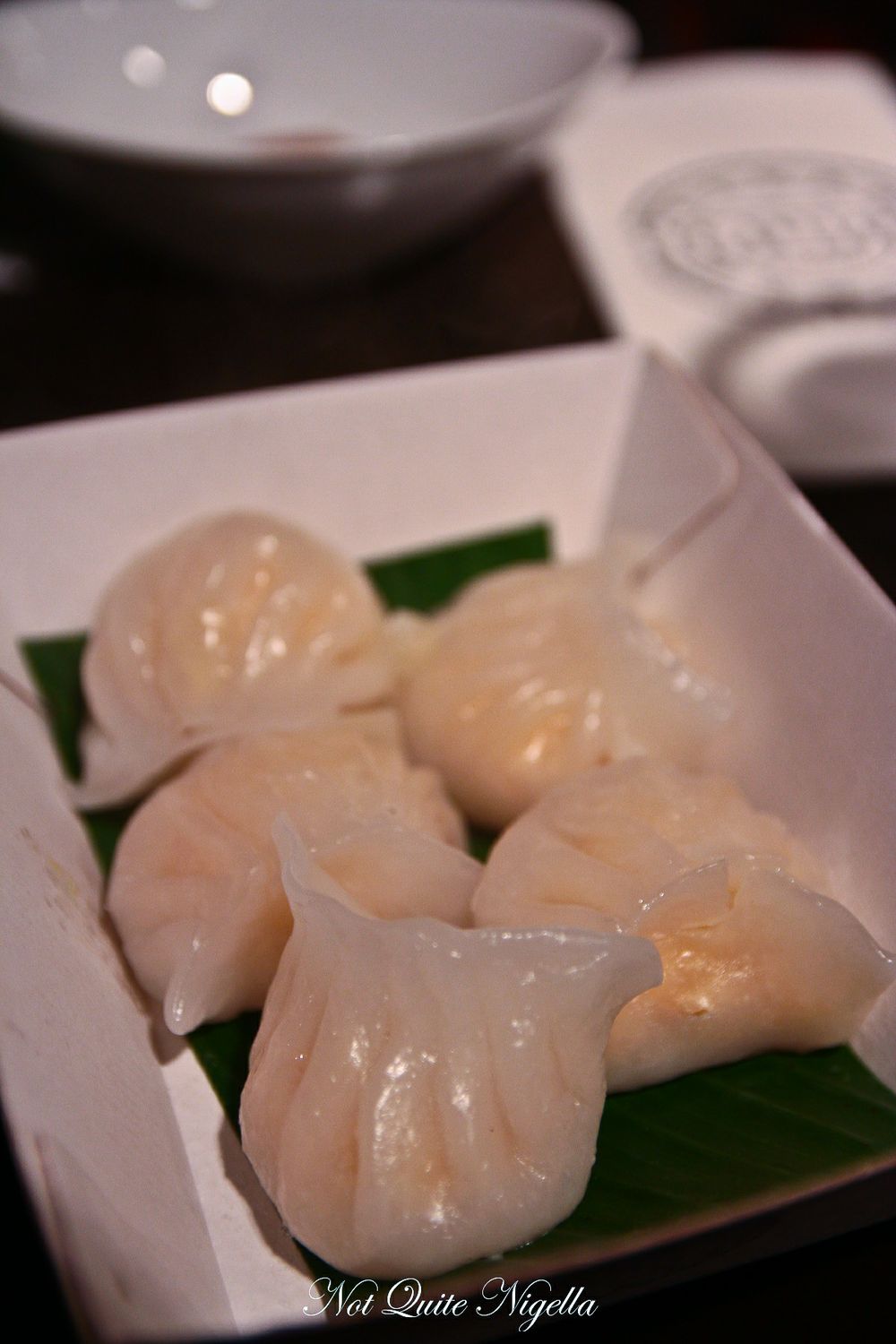 The prawn har gows came out first and we note that all of the items come out in cardboard boxes. Some of the skins are broken but the filling is full of prawns and they're satisfying enough. While they're not the best har gows that we've had, they're not bad. 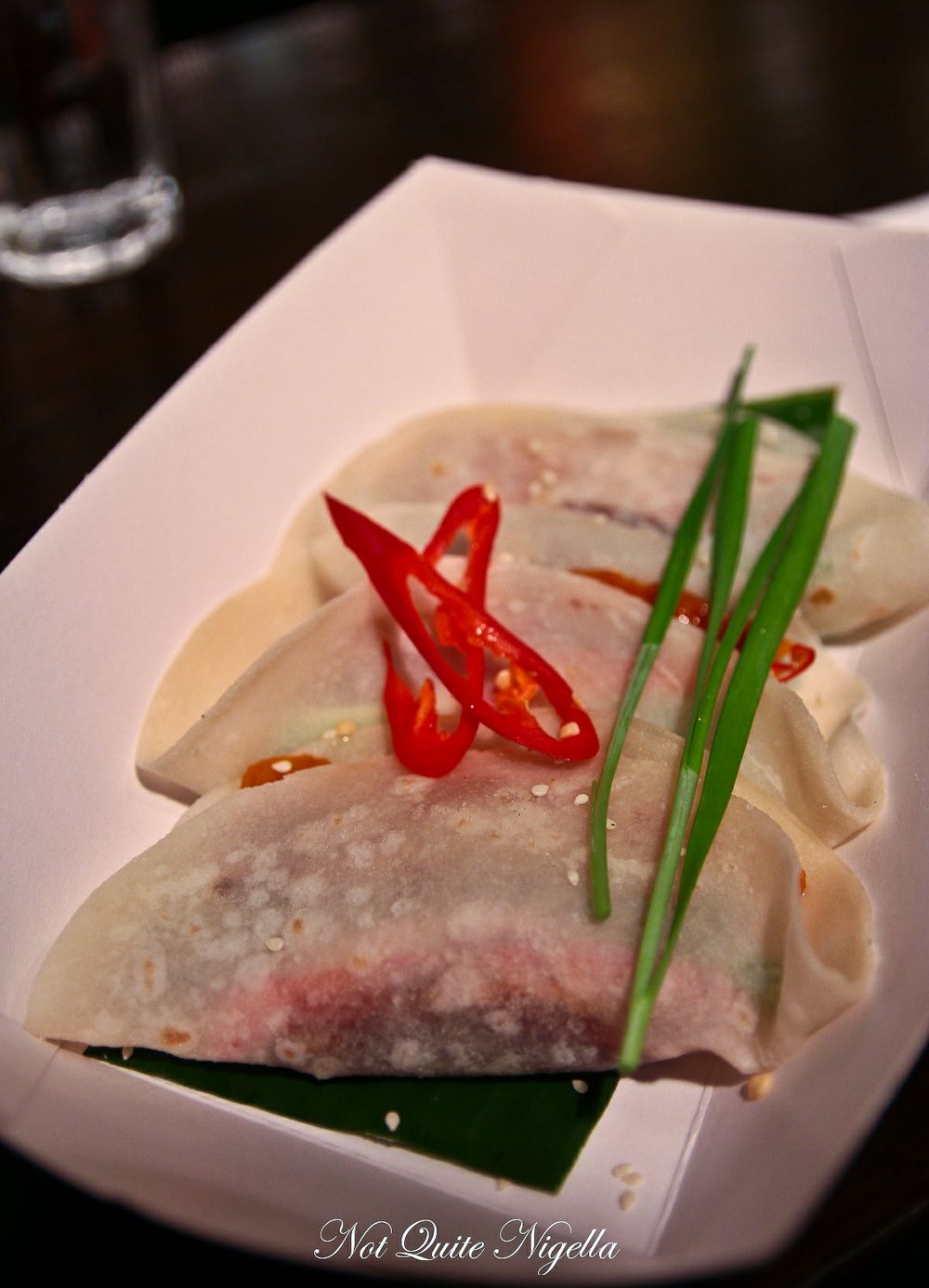 The duck pancakes aren't cheap but the pancakes are soft and fresh with just the right amount of hoi sin and roast duck filling. 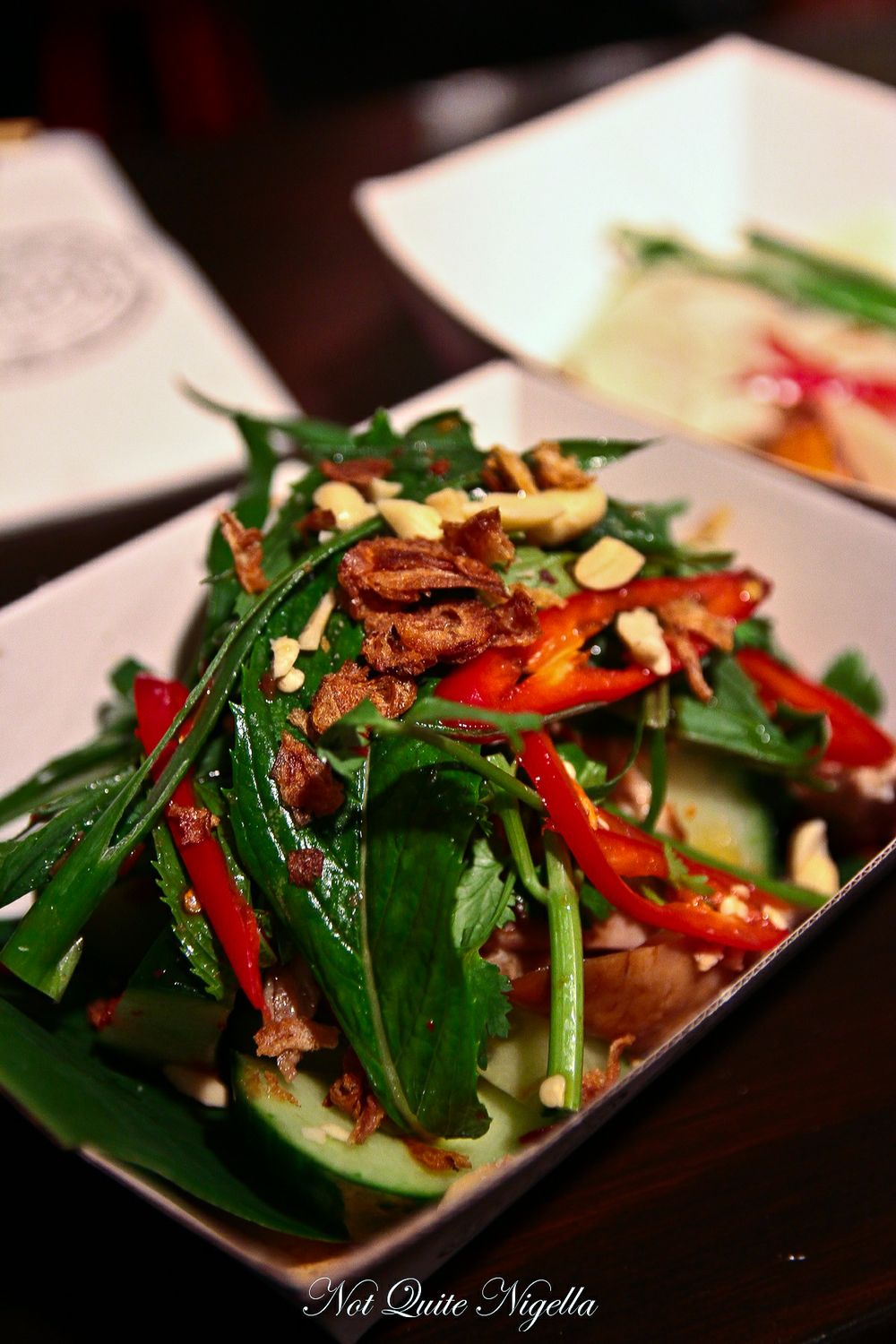 With a fair amount of soya sauce chicken in it, there's also a tumble of fresh herbs, shallots, sesame and cucumber. The cucumber is in chunks that are perhaps a smidgen too large but the salad is fresh and well balanced in flavour. 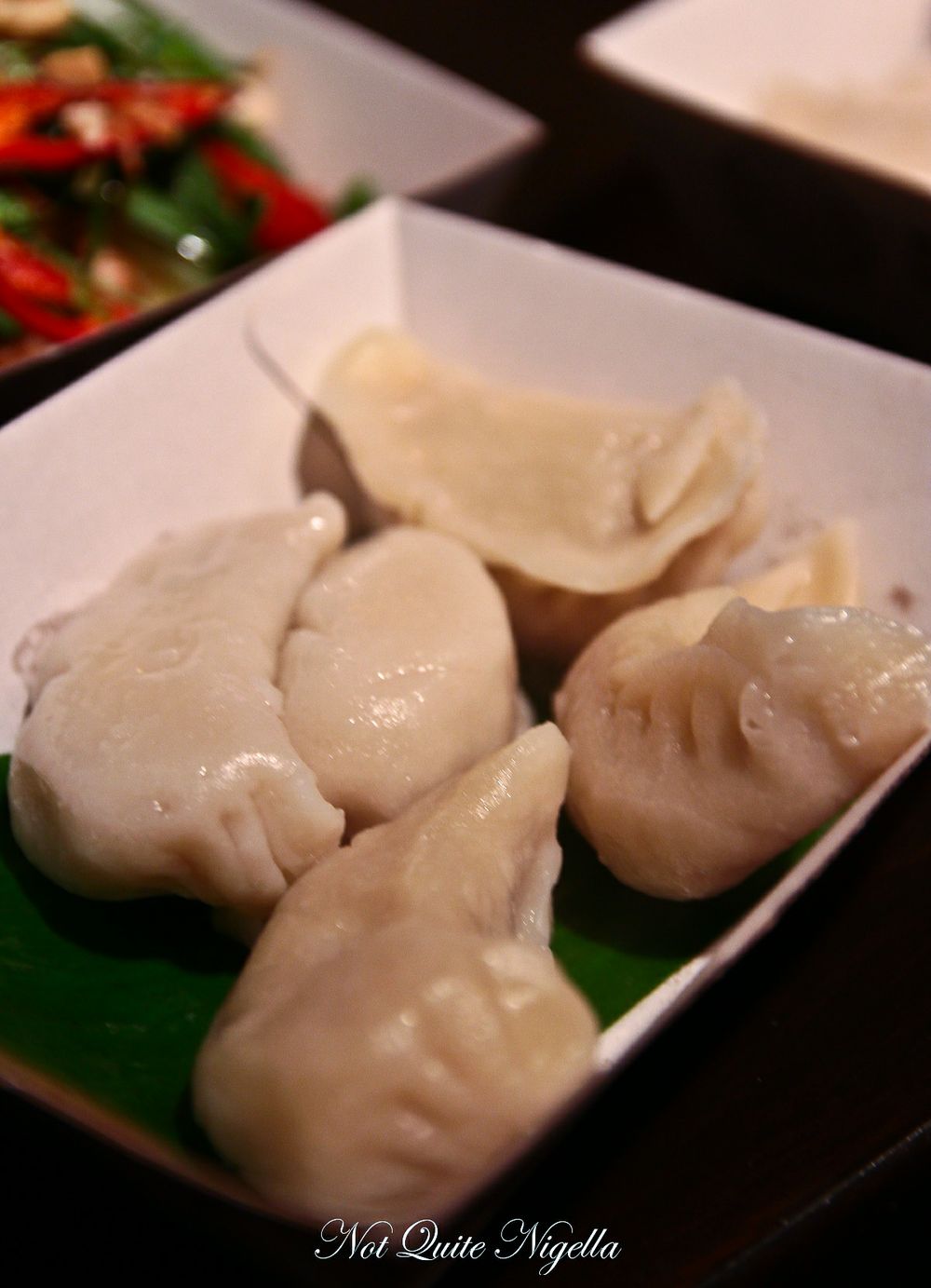 Admittedly, these looked quite unimpressive, especially as they were served less photogenic side up but these were our favourite dumplings of the evening. With a well seasoned, flavoursome pork filling highlighted with ginger they were spongey textured, moist inside and moreish. 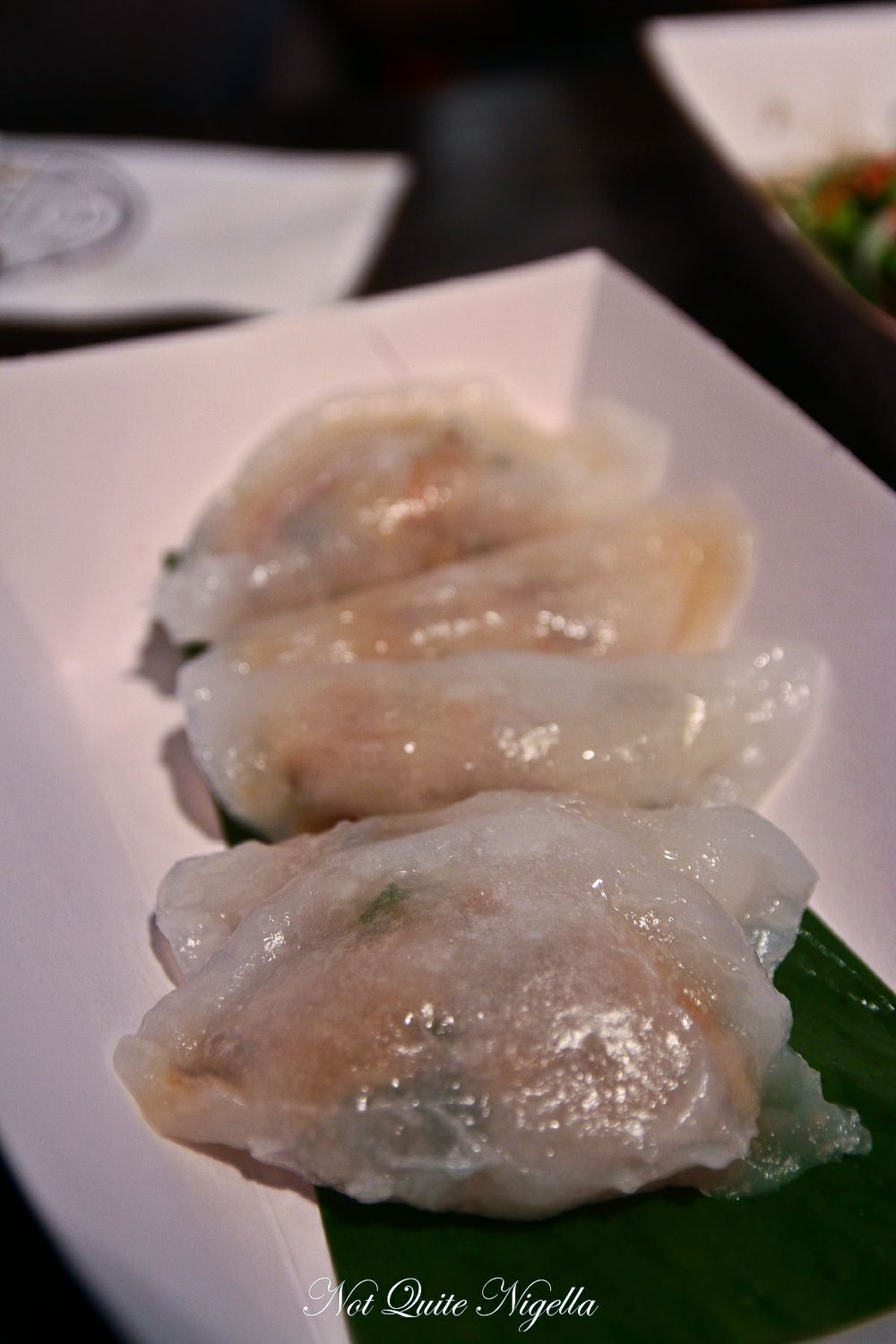 Alas, neither of us were fans of these dumplings, the skins were quite wet and gluggy and the filling wasn't particularly crunchy or flavoursome. I was a little sad that these went uneaten but unfortunately we just didn't love them. 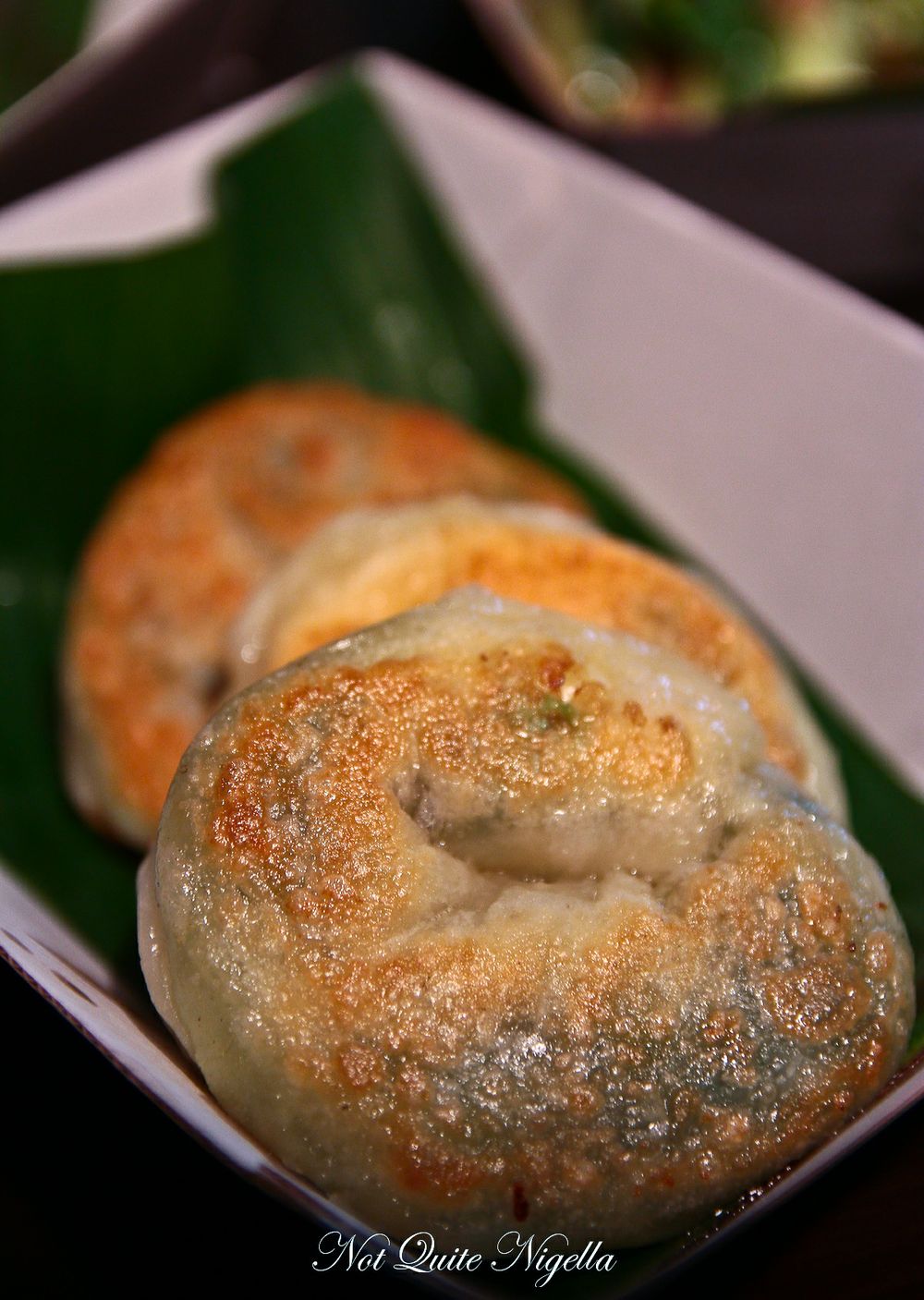 However, the polar opposite were the Shanghai style shallot pancakes. Served as three folded over rings, they were filled with shallots and were crispy crunchy on the outside and soft and juicy on the inside. We also liked the portability and presentation of these which are usually served as large pancakes.

OK, for these we can forgive the Wong jokes ;)

So tell me Dear Reader, are you the first to arrive at meetings or the last? And do you like places with a buzzy atmosphere or quieter places where you can linger and talk? 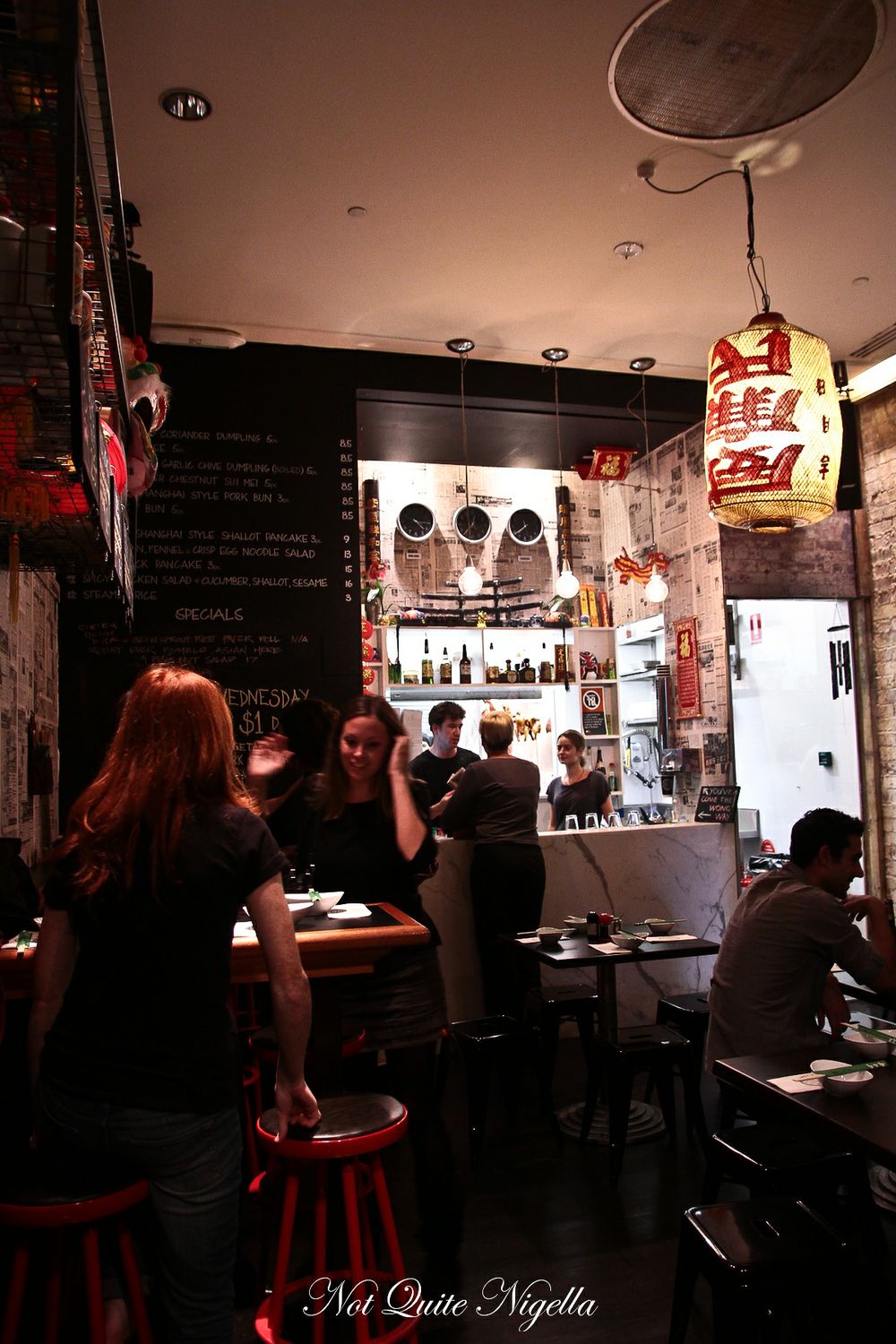 Open Wednesday to Sunday evenings. Wednesday night is Wong Tang Wednesday where a selection of dumplings are $1 each (but must be ordered in tray quantities). 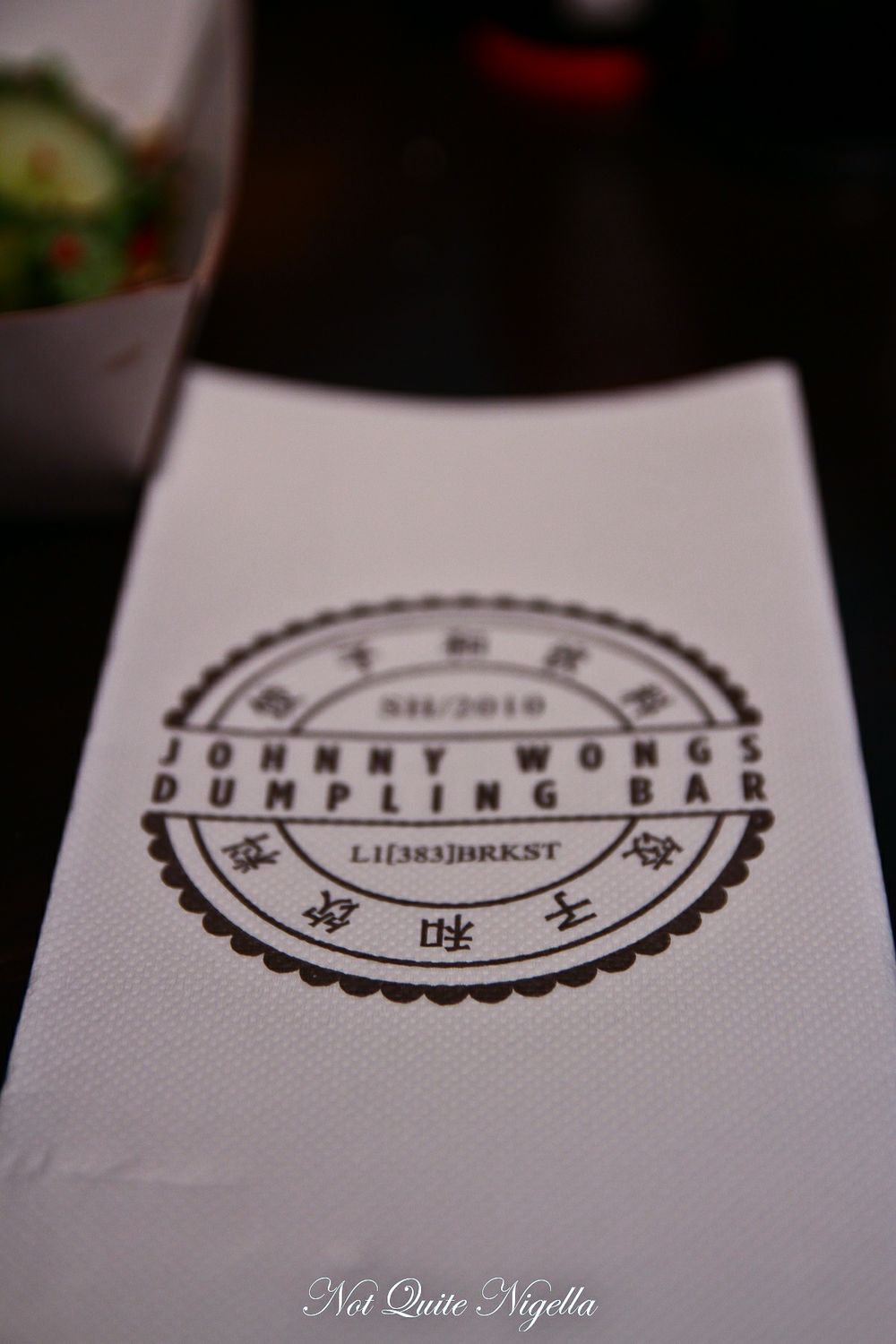