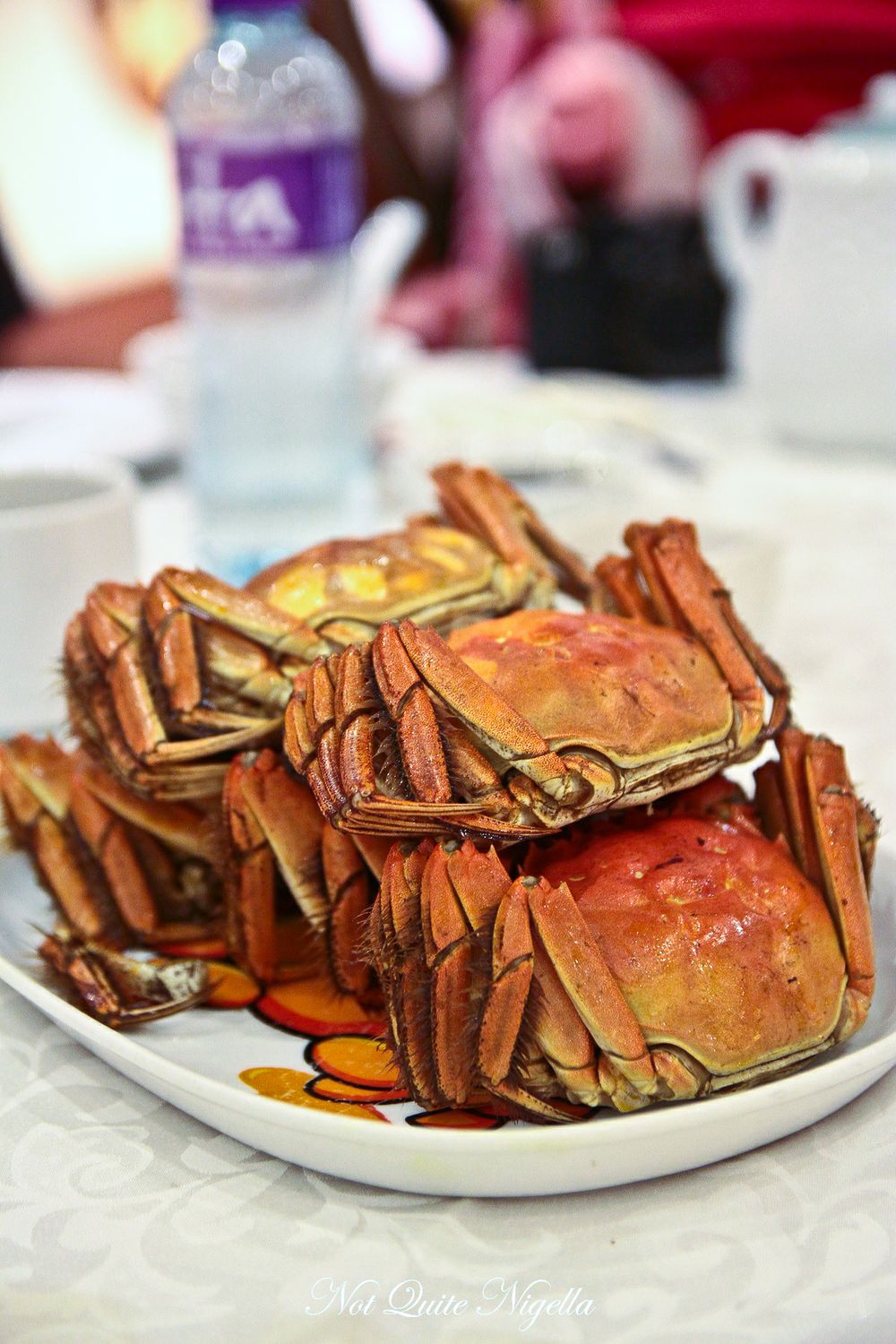 You often hear about eating seasonally and how this is better way of eating and it makes total sense. And some countries do this more naturally than others. Austria has asparagus season and Italy has chestnut and in Hong Kong, one of their many seasonal treats is the September-November eating of the hairy crab. What is so special about a crab and what is a hairy crab? Hairy crab is available for just a few months of the year and unlike regular crab where you usually request a female for the flavoursome roe, the hairy crab's male specimen is prized for the unusual "egg yolk" inside. 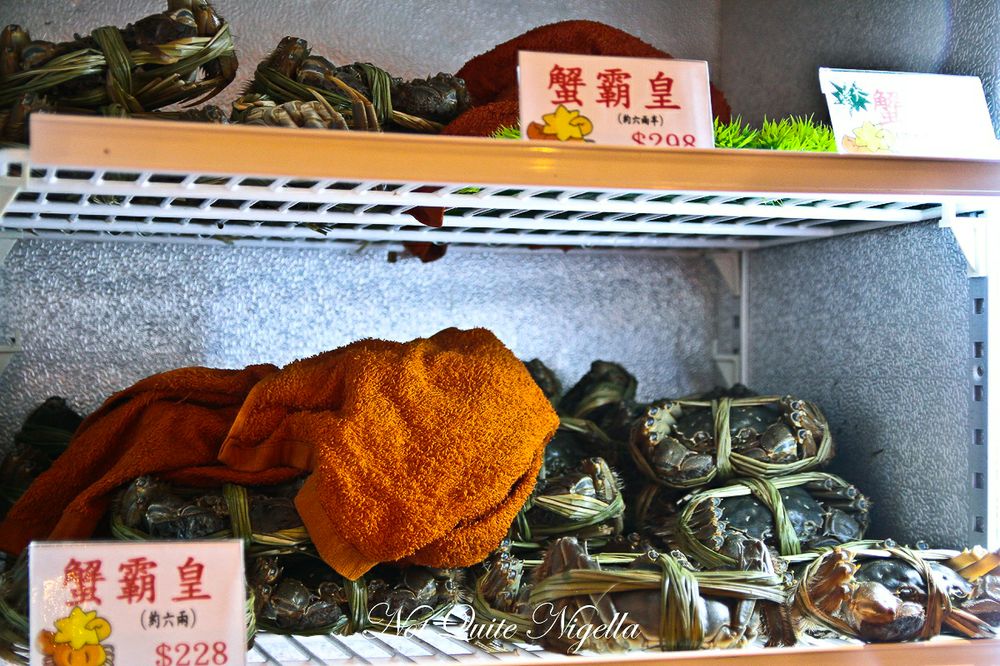 Shanghai's hairy crabs or mitten crabs are so named for the dense, black furry patches of hair on their largest pincers. Small and served steamed, these crabs are known for being prolific procreators able of withstanding polluted conditions and tolerating heavy metals. In Europe, they are considered a pest and in America, their population is closely monitored as they often dominate their environment potentially destroying other species. In London, alerts were broadcast with sightings of the hairy crab emerging from the Thames River with the Natural History Museum releasing press releases telling people that they were edible. 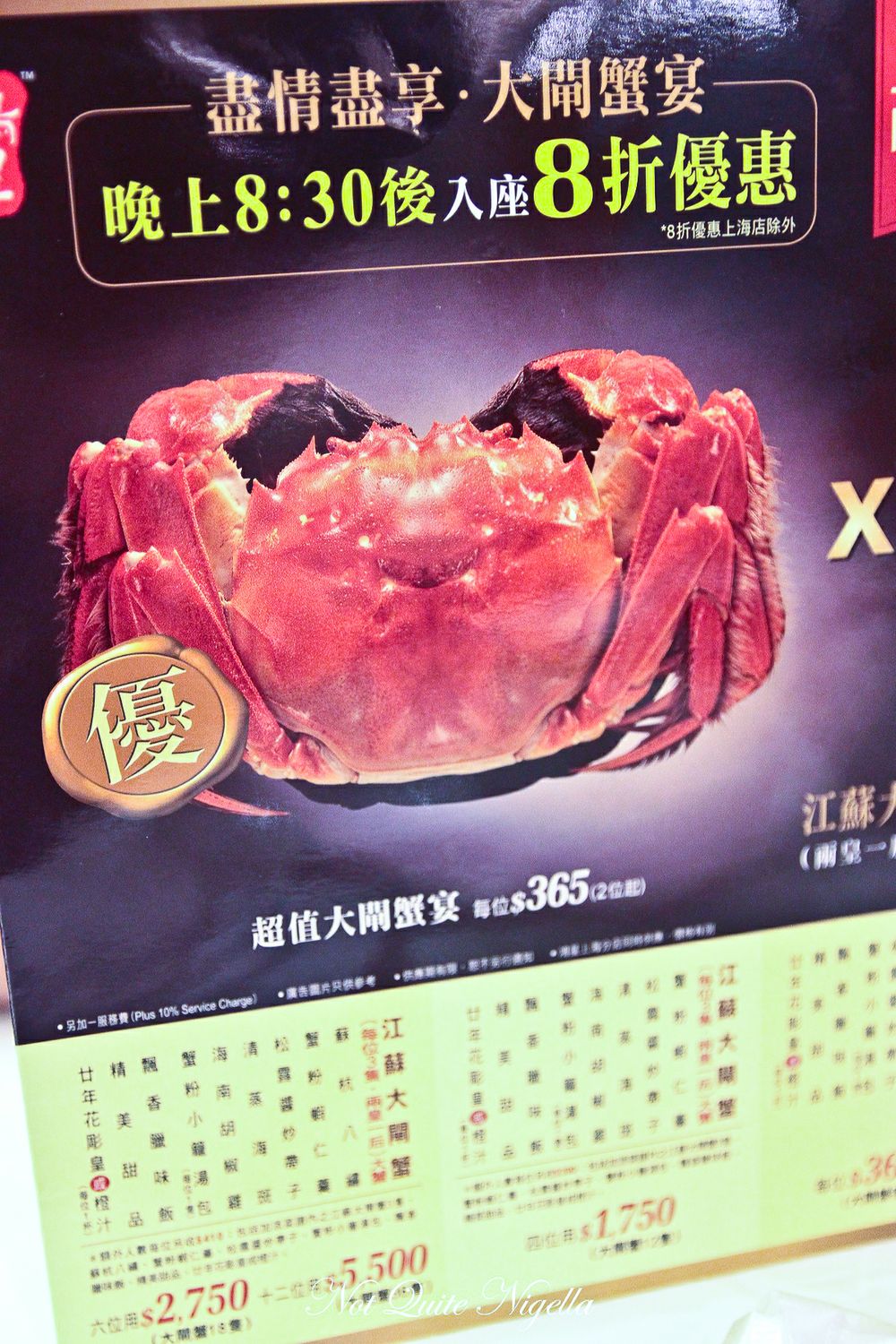 These crabs are said to be from the cold Lake Yeung Ching in China although there is discussion about whether they actually come from there as it is said to be quite polluted. The cost of the actual crab is about $50HKD/$6AUD for a 3oz crab or $100HKD/$12.30AUD for an 8 oz crab-they're not too costly for a season crab delicacy. 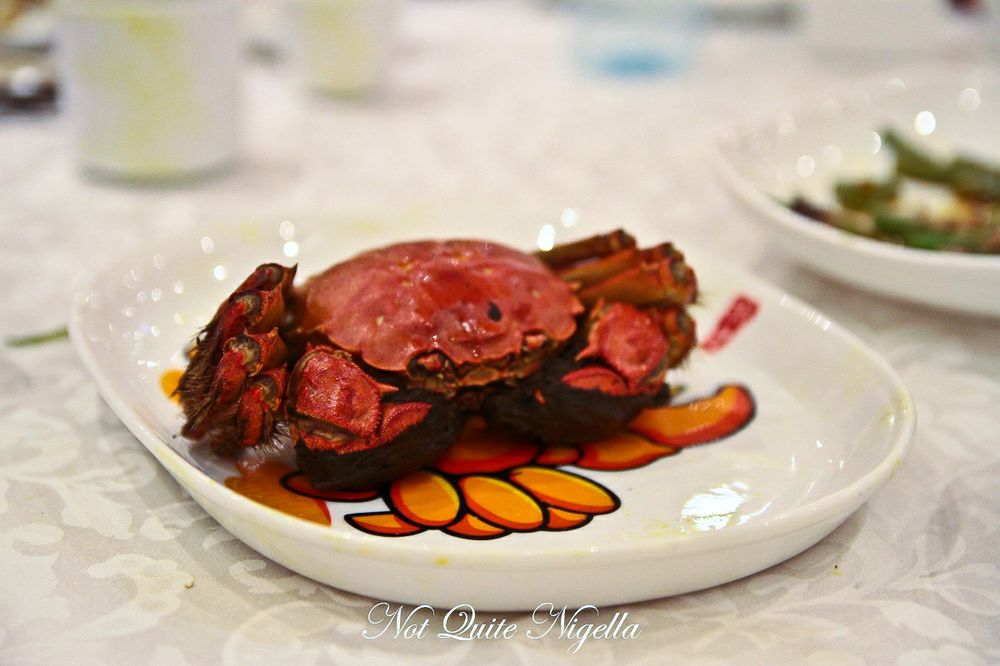 We're at Superstar Seafood Restaurant in Hong Kong's Harbour City and we weave through the maze of shops ooohing and aaahing over the different brands, many of which we just don't get in Sydney. But our mission this evening is not about shopping and shoes, but about snaring these prized crabs before the season finishes at the end of November. 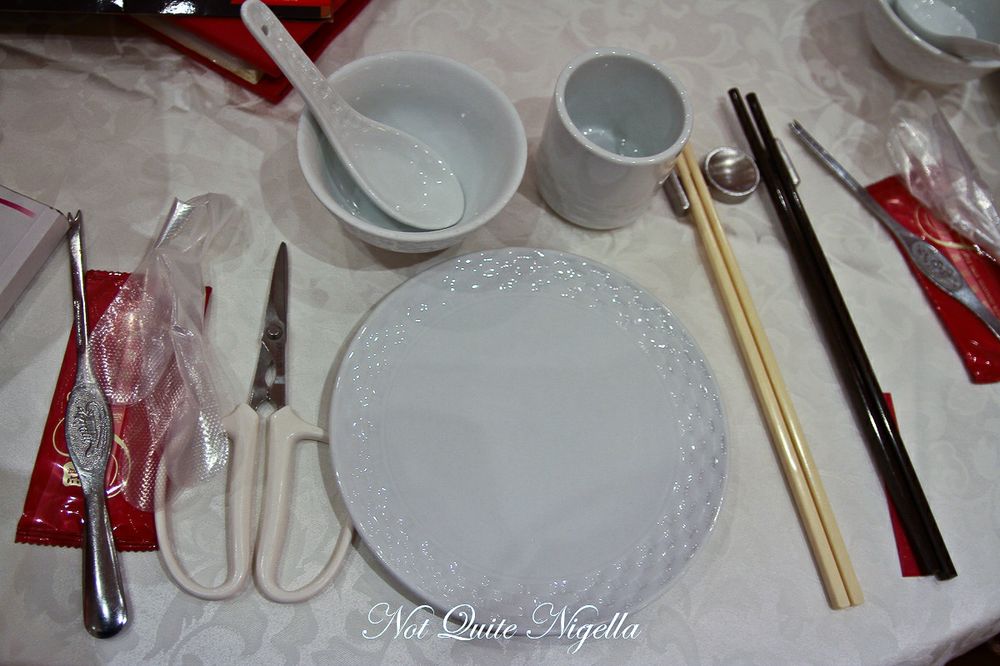 Or at least doing some serious operations on them as evidenced by our table setting. For each diner, there's a pair of scissors, some plastic gloves, a crab poker, two sets of chopsticks (one to help yourself to the shared food and one to eat with) and a crab fork. Around us are tables with couples in snug, cute little booths or groups eating in other booths and the thing that they have in common are the telltale plastic gloves. 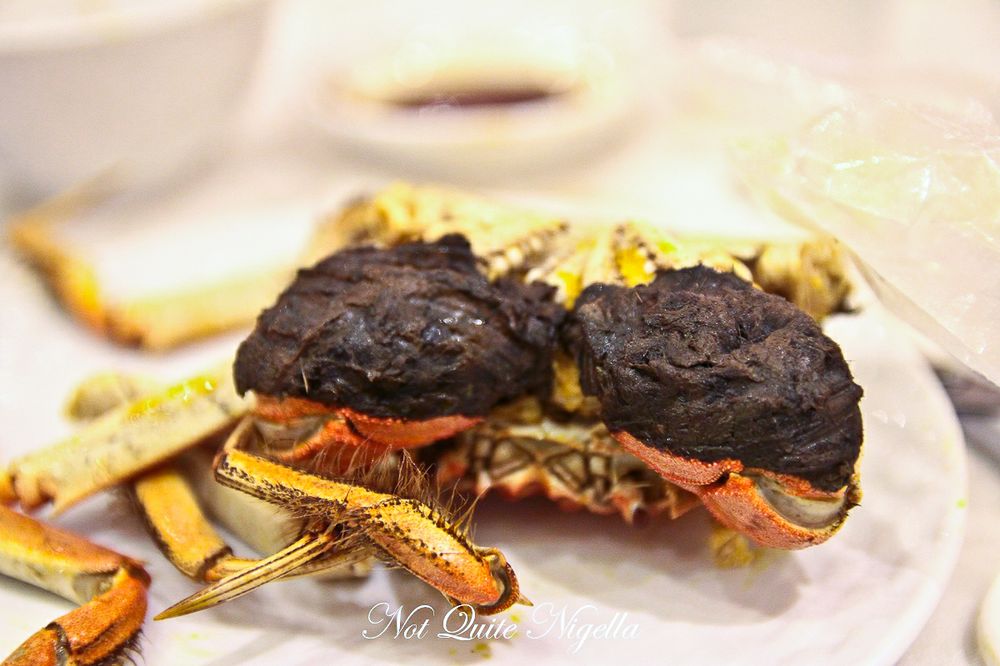 The black is the hair on the legs

Our set menu is $399HKD/$50AUD per person and for that we'll get a range of dishes and desserts including three hairy crabs: one female and two male. Our guide Fred shows us how to tell the difference between a male and a female crab-the male has a triangular tab while a female's is round. To eat a crab, don the gloves and break off or cut off the legs. He then shows us the best way to eat these hairy creatures. 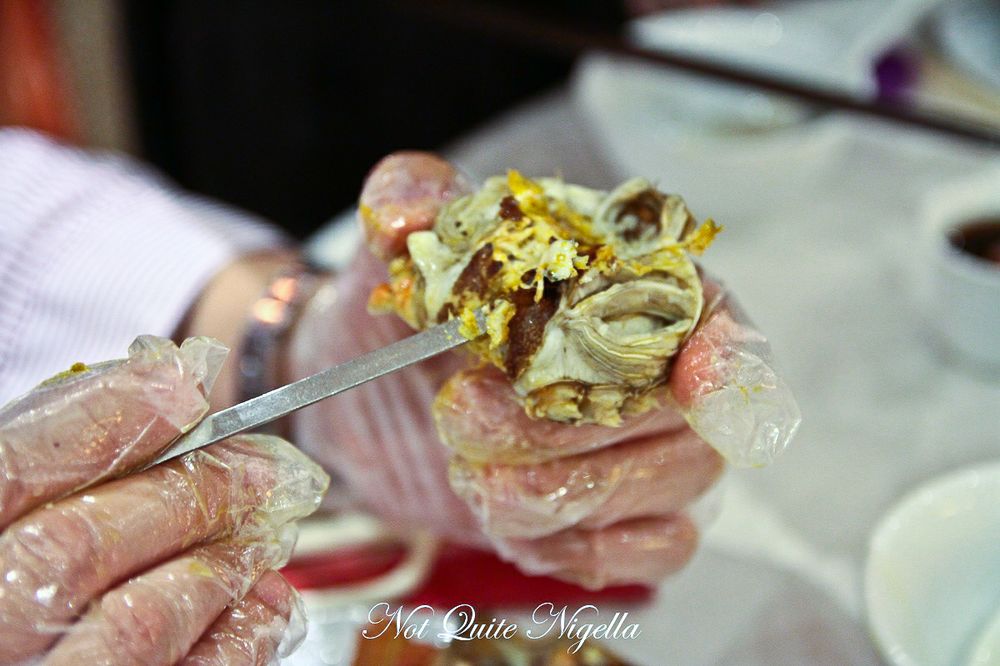 Chinese never eat a tiny small jellied are underneath the crab as they believe that this lowers their temperature so they remove it-it's hard to locate and is very small and oops, once I forgot it and ate it. Crab is said to be yin which means that it cools the body so it is always served with hot tea. After removing the legs, you then pull apart the shell and cut the body in half. Dip it in the black vinegar, an essential for the flavour, and eat or pick away at the soft meat with the little tool. 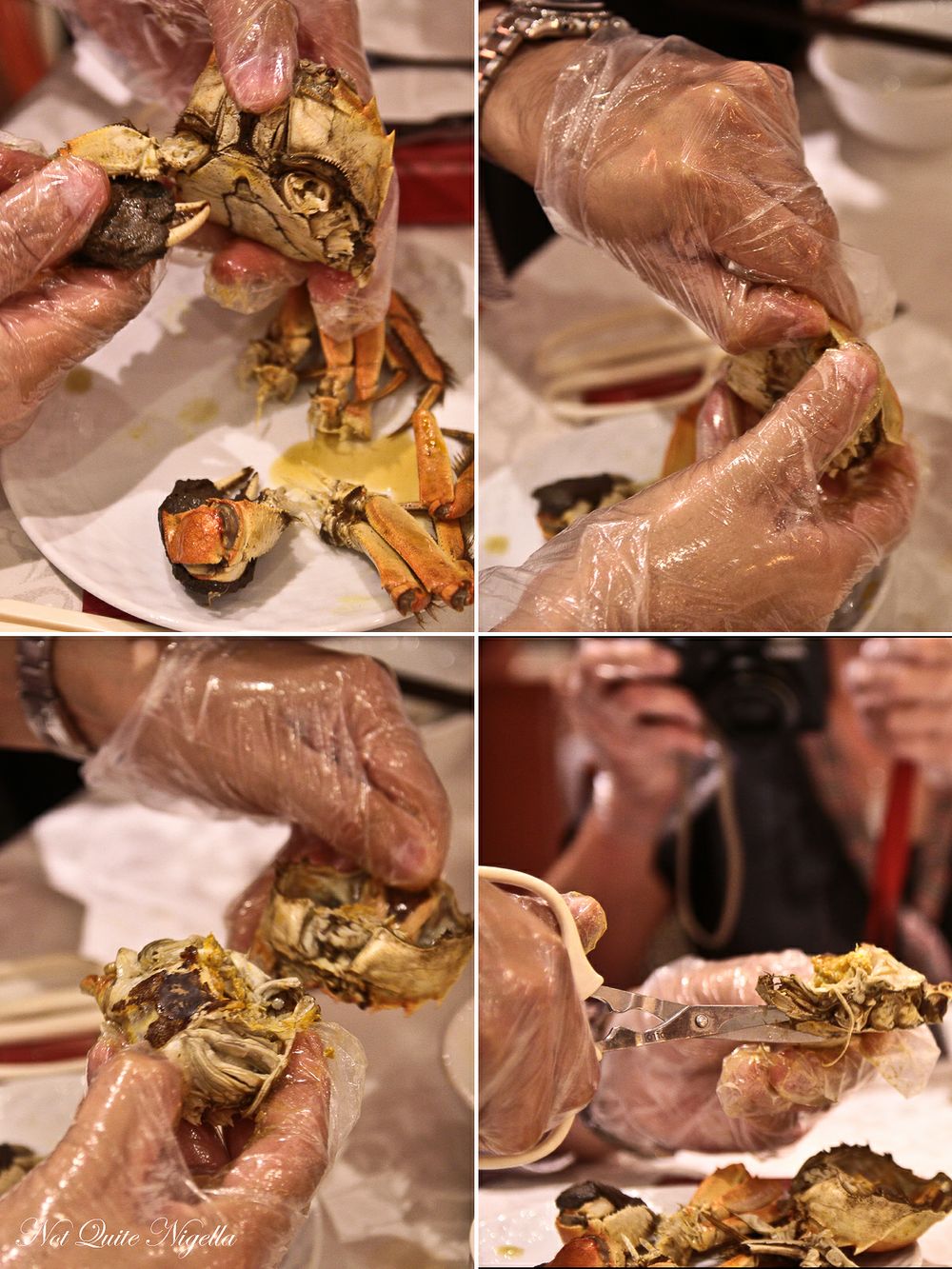 How to eat the hairy crab-start by removing the legs and then prying apart the top shell from the body. Cut the body in half with the scissors and then suck at the meat.

Some prefer the female, some male and they're both quite different. The male crab meat is fantastic, the yellow part, different from the roe, is not dissimilar to a hard boiled duck egg yolk and coats the tongue with its creamy richness. They are small crabs so the male crabs are also bigger and seem to have more meat. 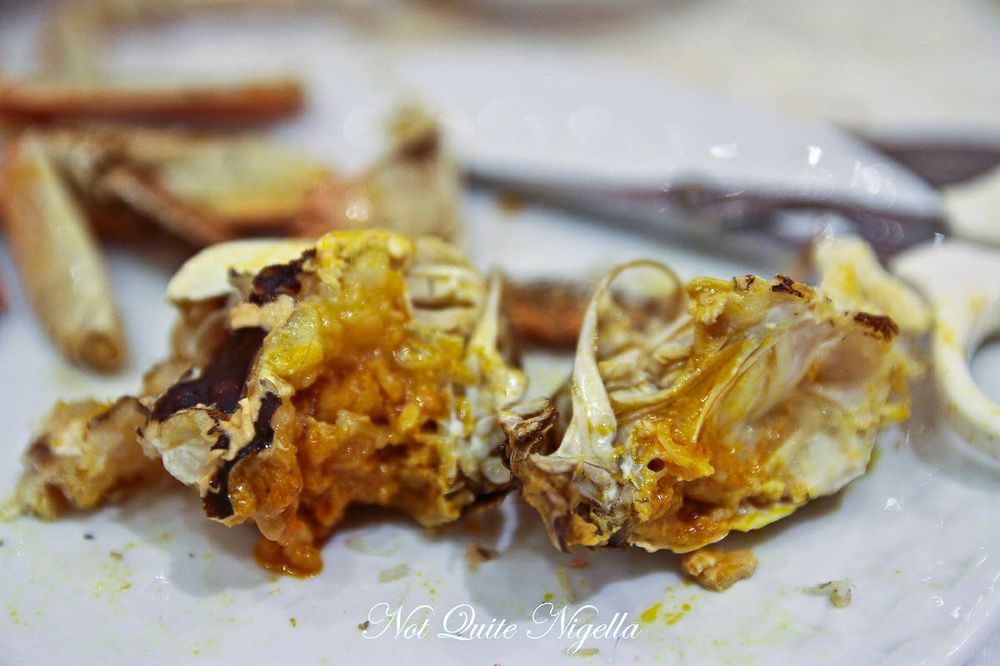 The female by comparison is about 75% of the size of the male and its roe is a harder, bright orange roe that we are used to seeing in mud crab. It is said that the best time to eat female hairy crab is September while the male is best eaten from October to November. 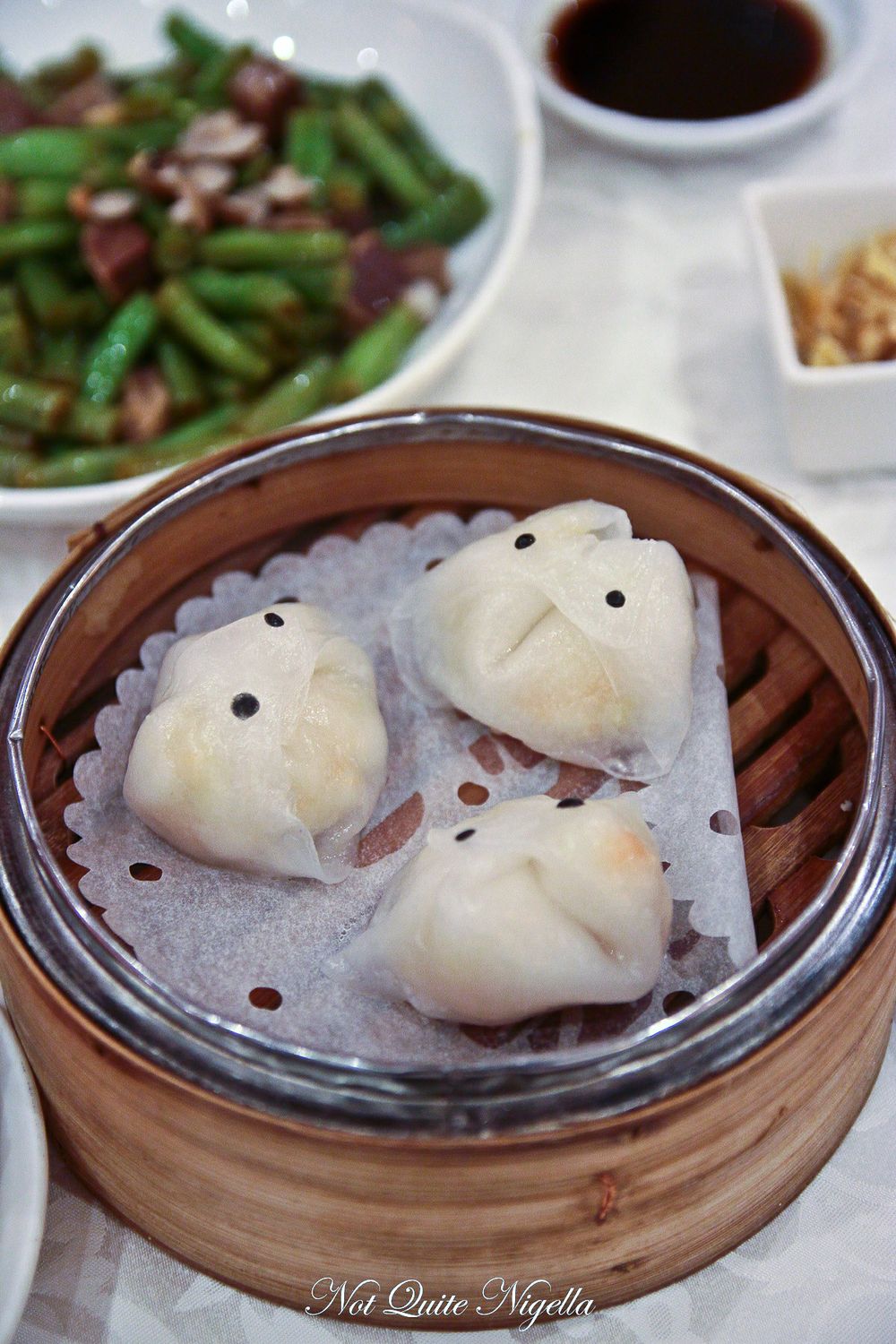 The restaurant is also known for their dumplings shaped into cute animals such as penguins, rabbit and fish. As it is dinner time, most aren't available except for the stone fish and rabbit steamed white buns. We try the stone fish filled with the stone fish which resembles prawns or scallops inside. 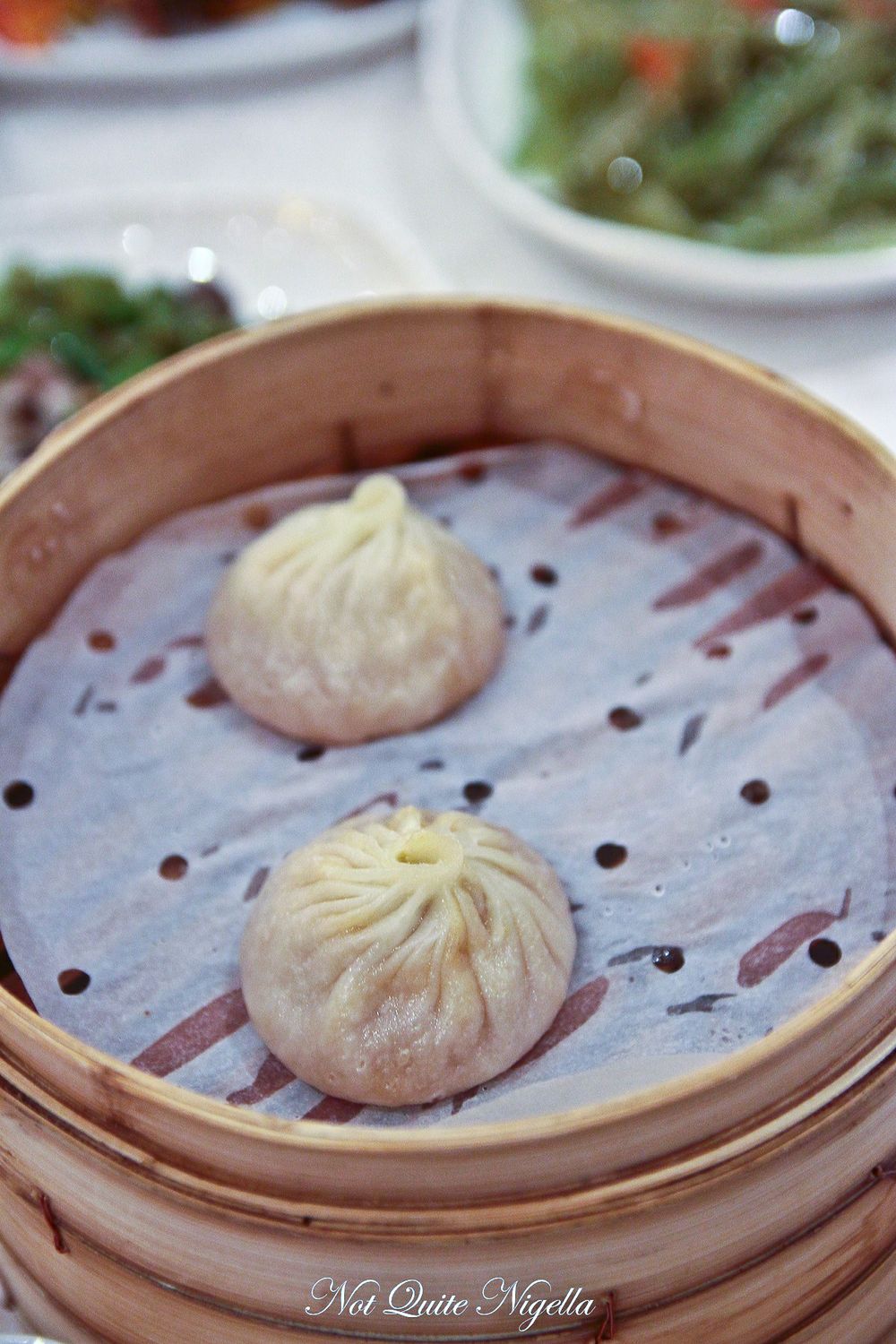 Also part of the set menu are xiao long bao and these come very plump with soup. A little nip into the sides with the teeth and we sip the soup out and then eat the rest of the gingery, delicious dumpling. 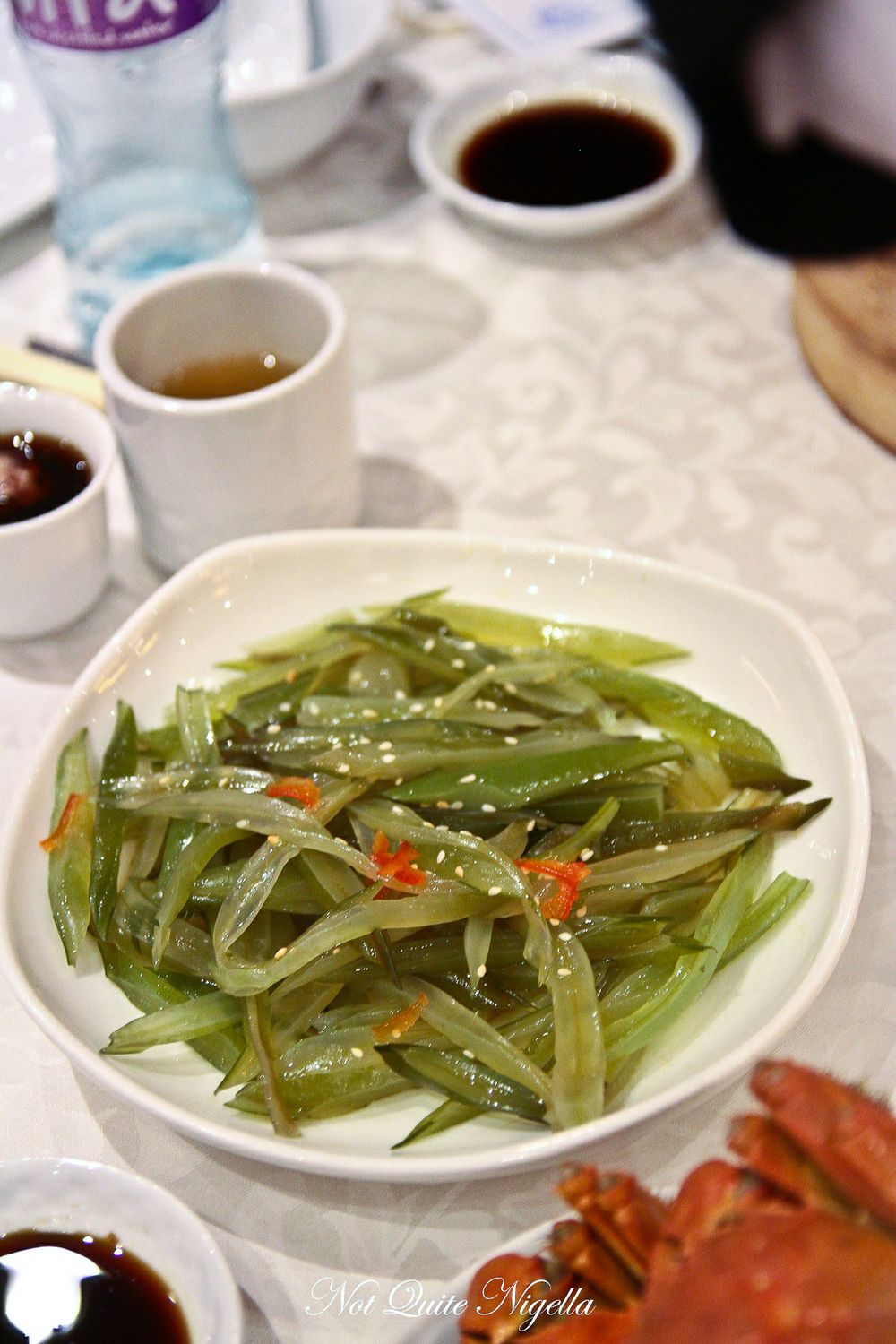 Some of the vegetable sides are interesting-there's the hoi pak choi vegetable which resembles a translucent green bean, with an almost glace fruit like texture. This is served with sesame seeds and a sesame sauce.Green beans are served with diced duck kidney. 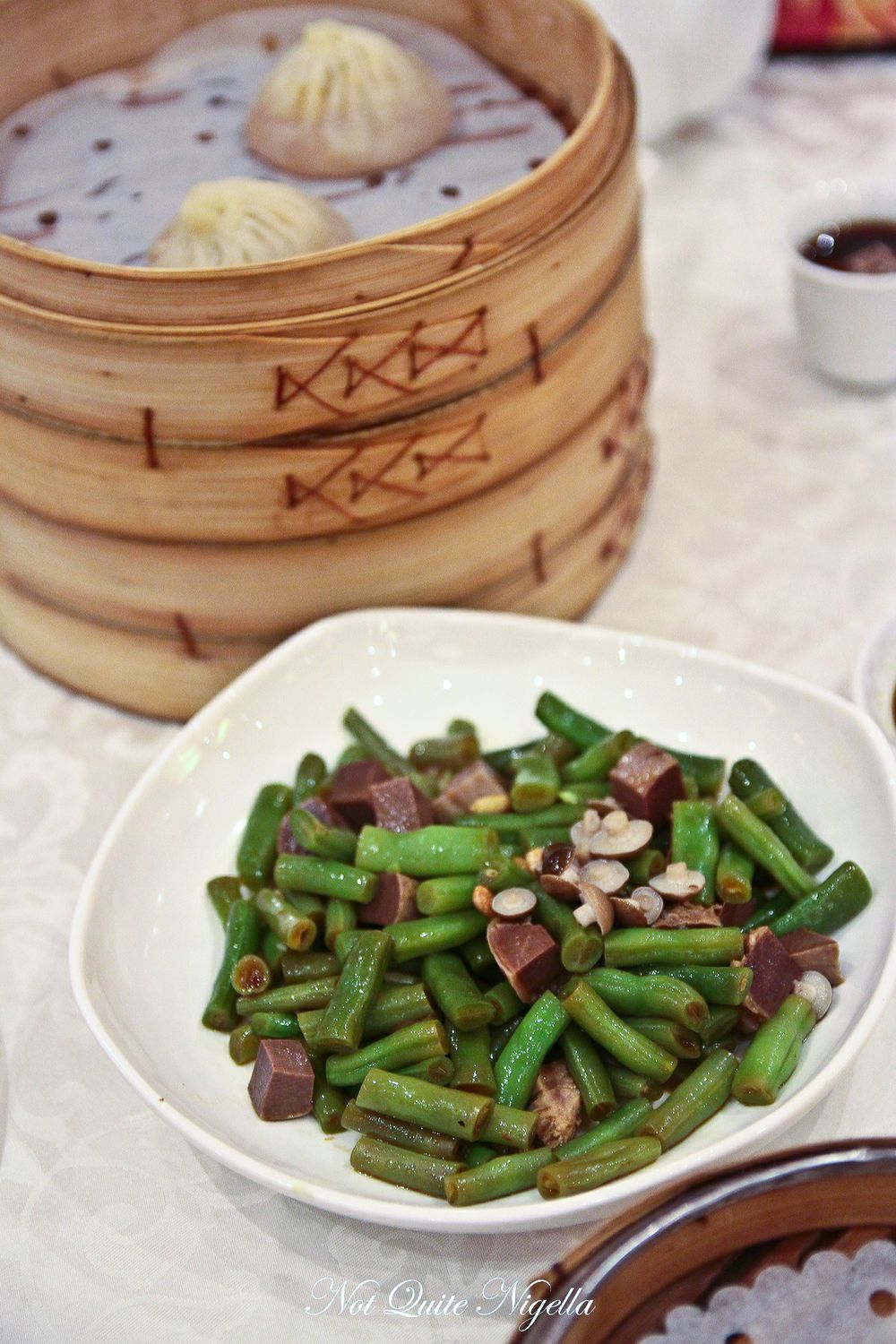 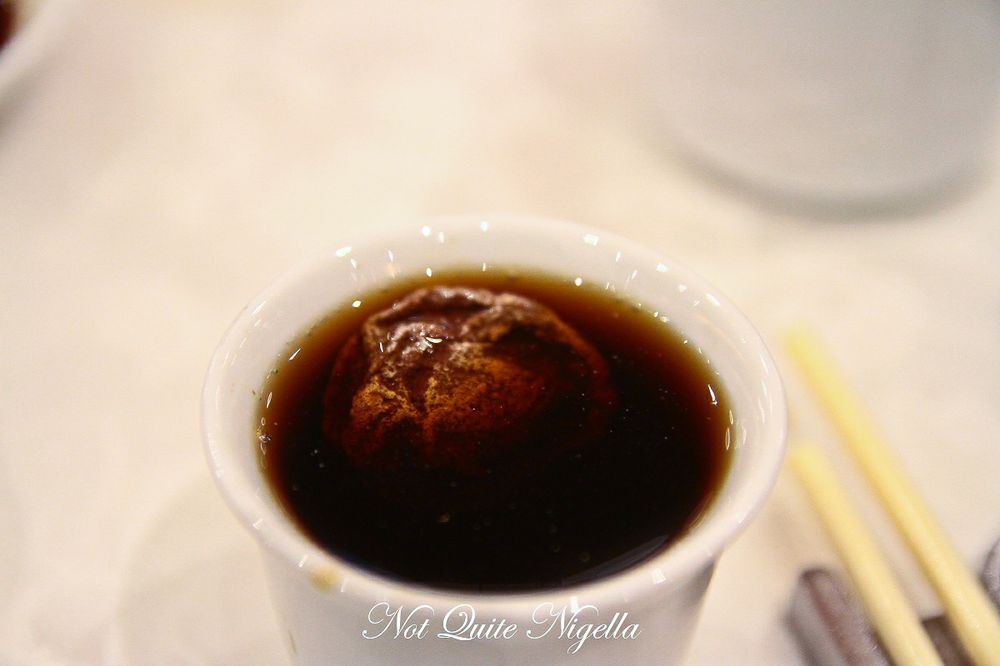 We try a 20 year aged Chinese rice wine with a salted plum in the middle-it's strong and reminds me of cooking with it and if left to steep, the salted plum certainly adds a great deal of saltiness to the wine. 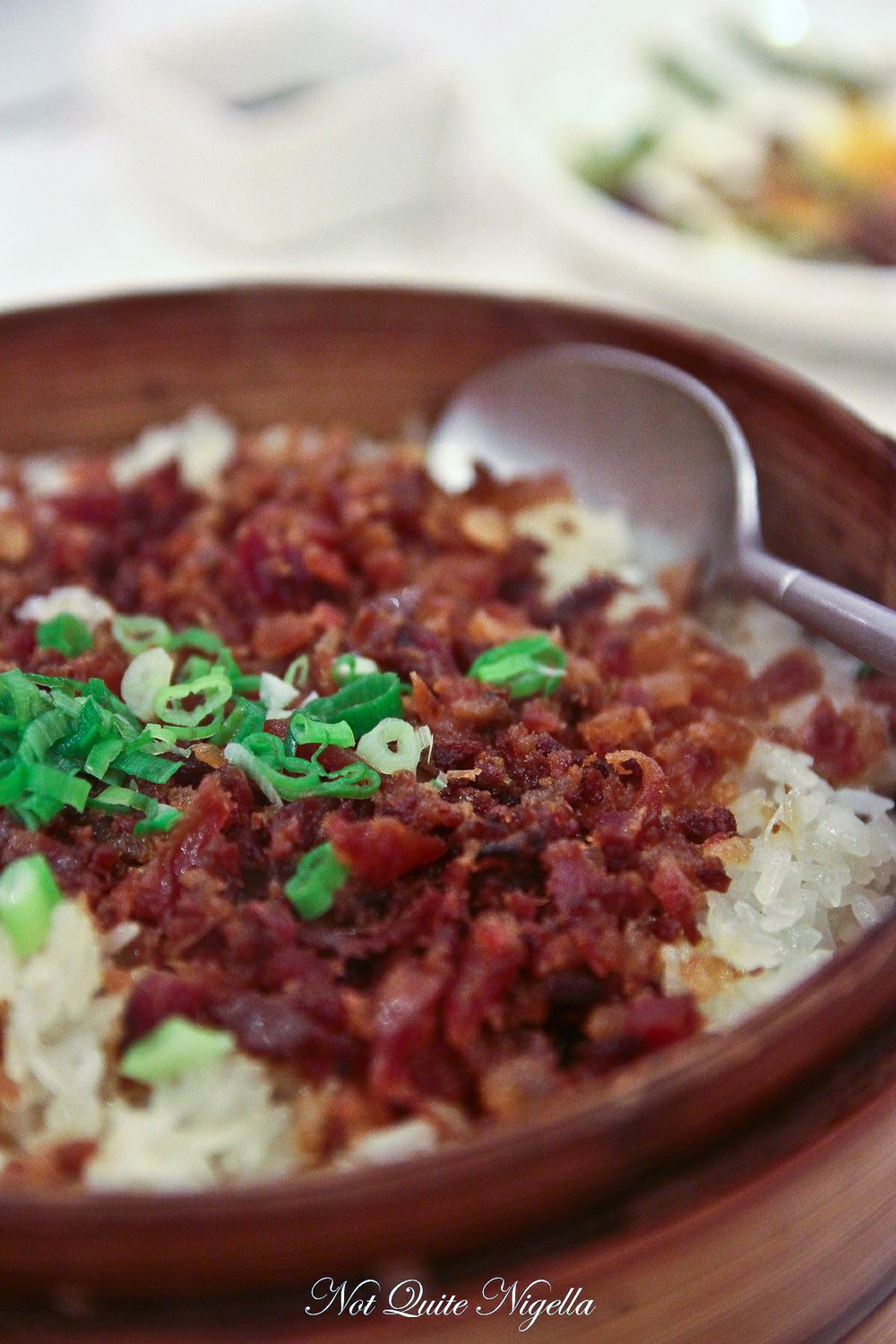 Another course is a glutinous rice dish topped with duck liver and pork sausage and it's a delicious but simple with the sticky rice and flavoursome sausage finely chopped and steamed on top of it so that the flavours from the sausage seep into the rice. It reminds me of my mother's dish which I love so much. 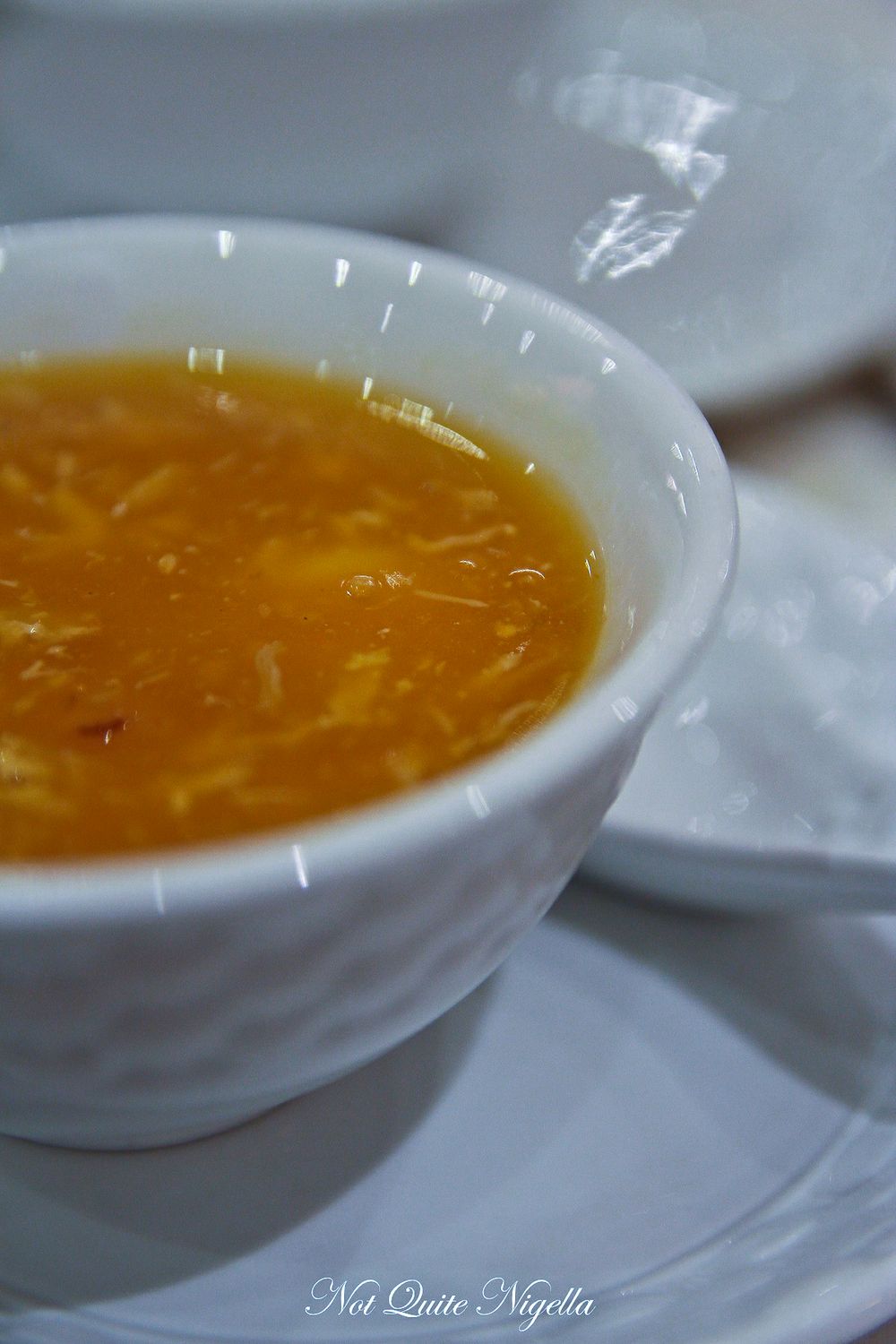 A soup with scallops and prawns follows. The seafood is juicy and plentiful. I count three curled up prawns in mine but I'm getting quite full at this stage. 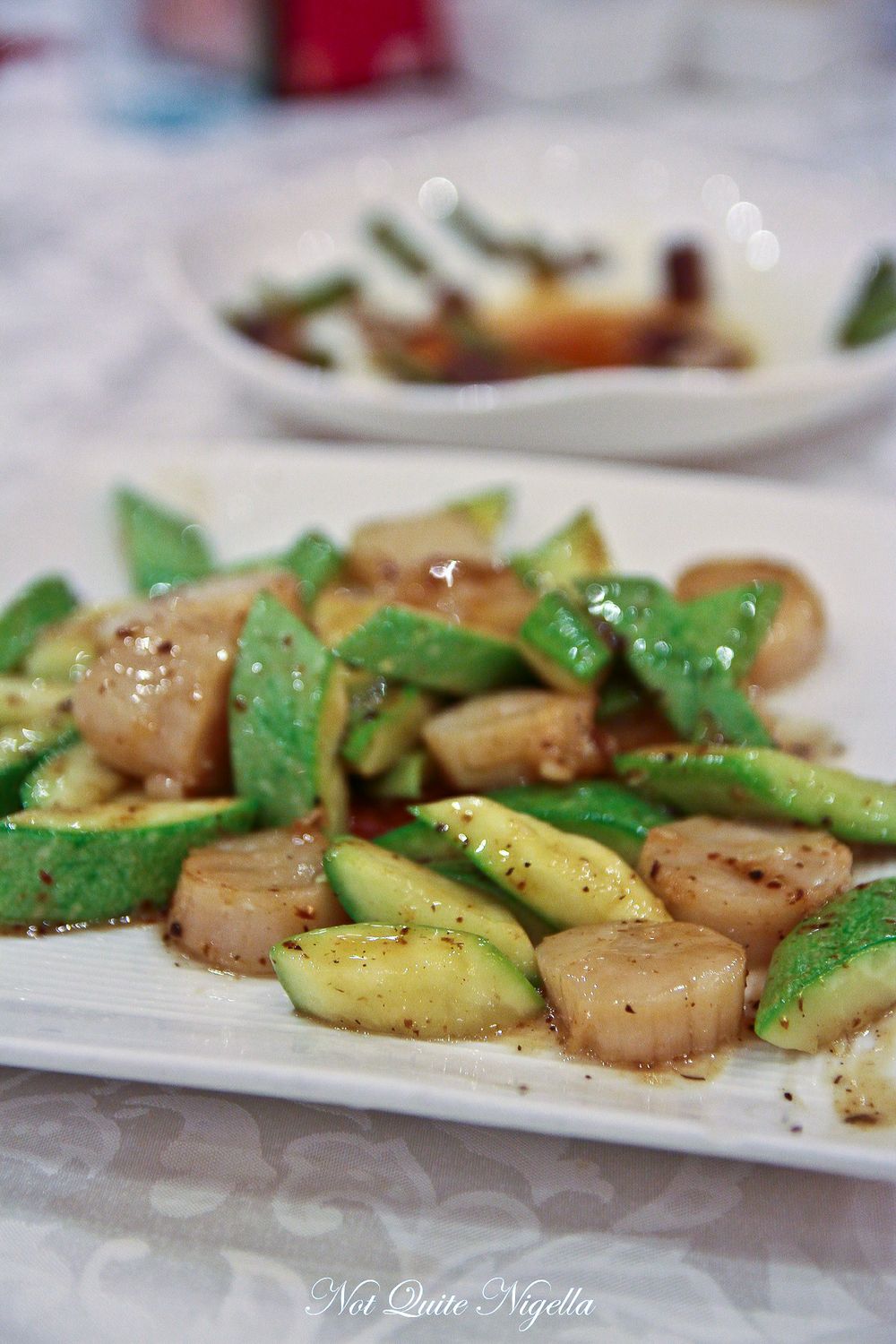 One last savoury dish is the scallops and some sort of melon or gourd. The scallops were a really curious flavour. They looked like scallops but tasted just like fish balls with the same texture and flavour. A shame as the dish would have been quite good otherwise. 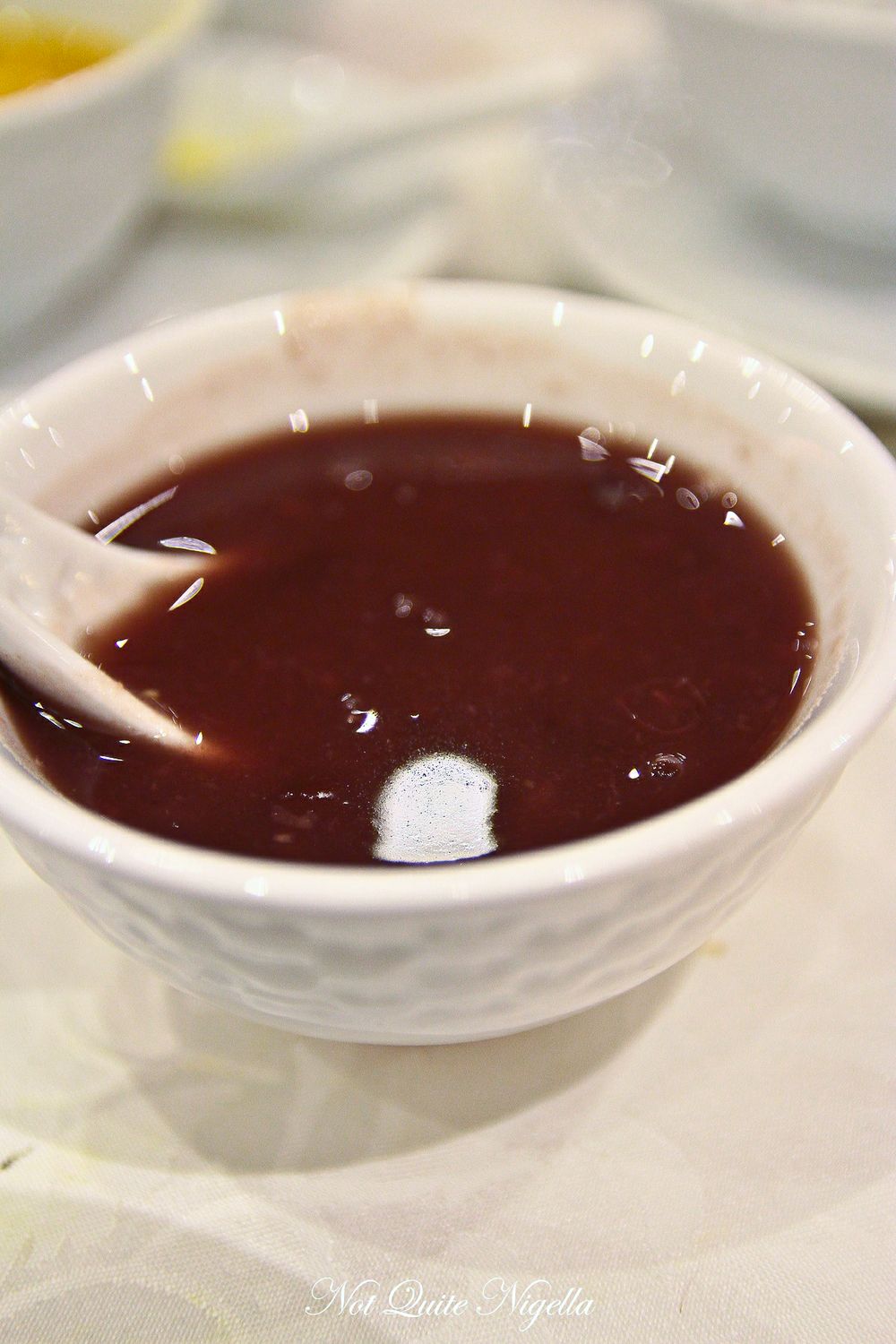 And post dessert? Why a little more shopping as even on a Sunday night, they open until 11pm on Canton road! A shopper's paradise no? So perhaps the night was about shopping, shoes and crab.

So tell me Dear Reader, have you ever tried hairy crab? Do you find crab too fiddly or do you not mind picking at it? And when eating crab, do you like the roe? 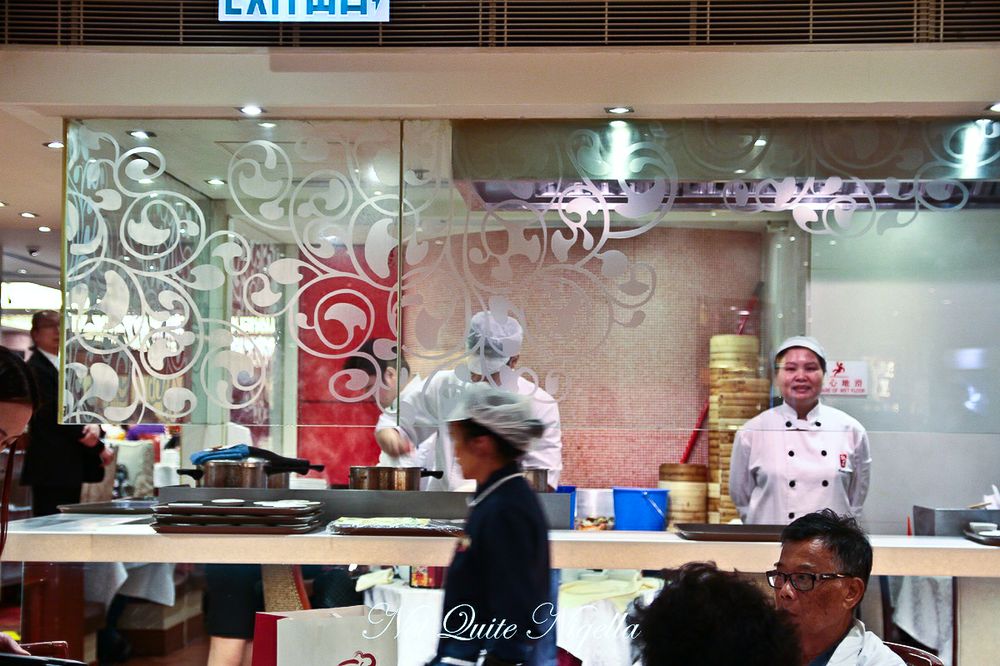