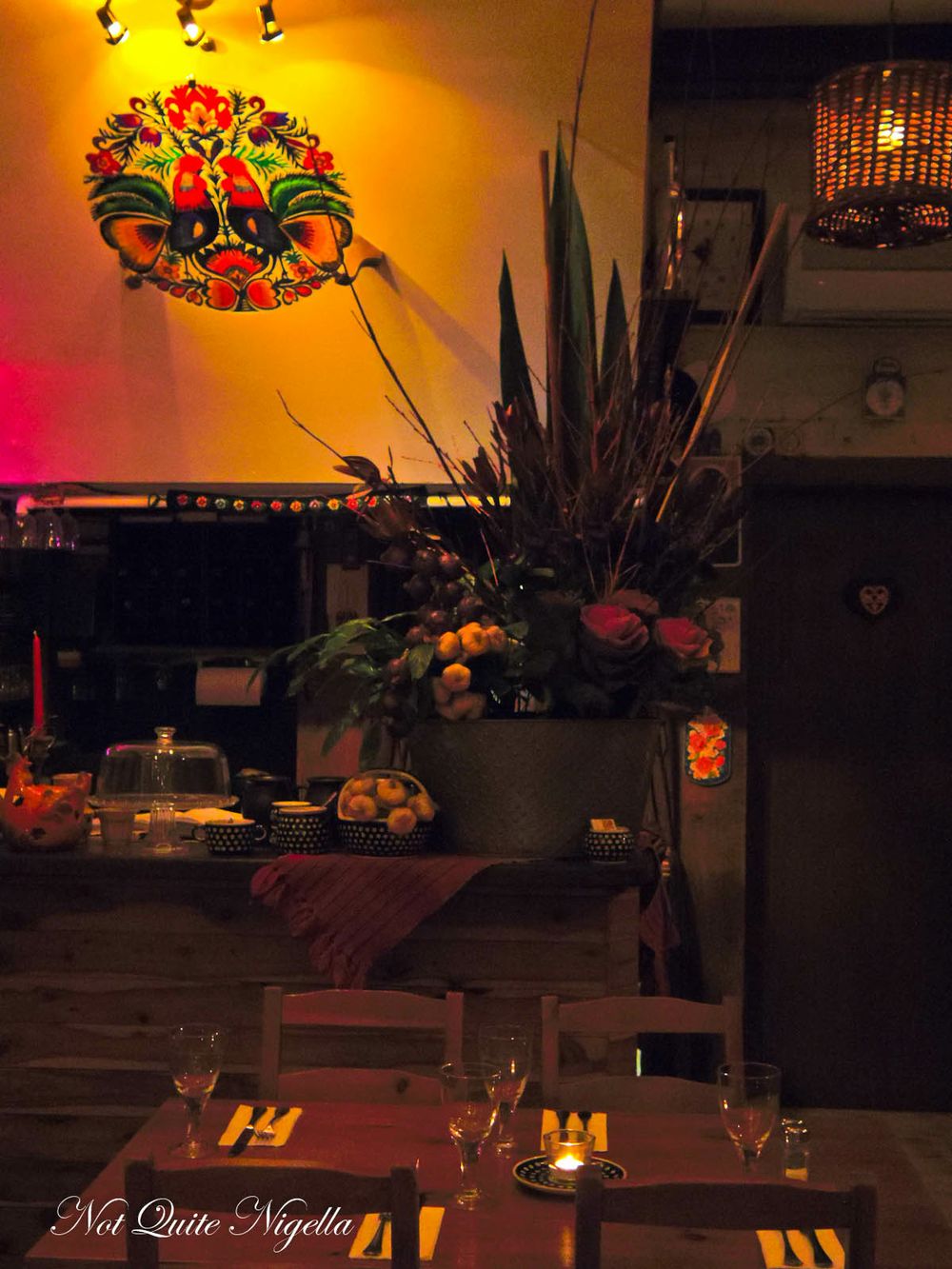 "Oh dear, just put it away and never mind" Queen Viv said looking at the parking ticket stuck under the windscreen wiper of my car. I was in a fantastic mood as we had just completed my "Dear Reader" event at Gleebooks with the divine Maeve O'Meara with the always fabulous Queen Viv as a special guest speaker. As I was walking out I realised that in my haste to bring all of the hot food and Baroque macarons in, I had forgotten to feed the meter. Oops! But nothing could dampen my joy at meeting my readers face to face and I slipped the note into my bag and forgot about it.

Afterwards, our motley but hungry crew of four (Maeve O'Meara, Queen Viv, Tania and I) thought that we'd wander up Glebe Point Road to see if we could find somewhere to eat. We passed Na Zdrowie, a Polish restaurant. Now if you are going to go anywhere with Food Safari's Maeve O'Meara, it's probably a wise idea to go to one of Sydney's many world restaurants and it seemed the perfect cuisine to warm us up on this chilly evening. I had tried to eat there with a friend several months ago but when I arrived, they had no trace of my reservation and it was full so we went elsewhere. 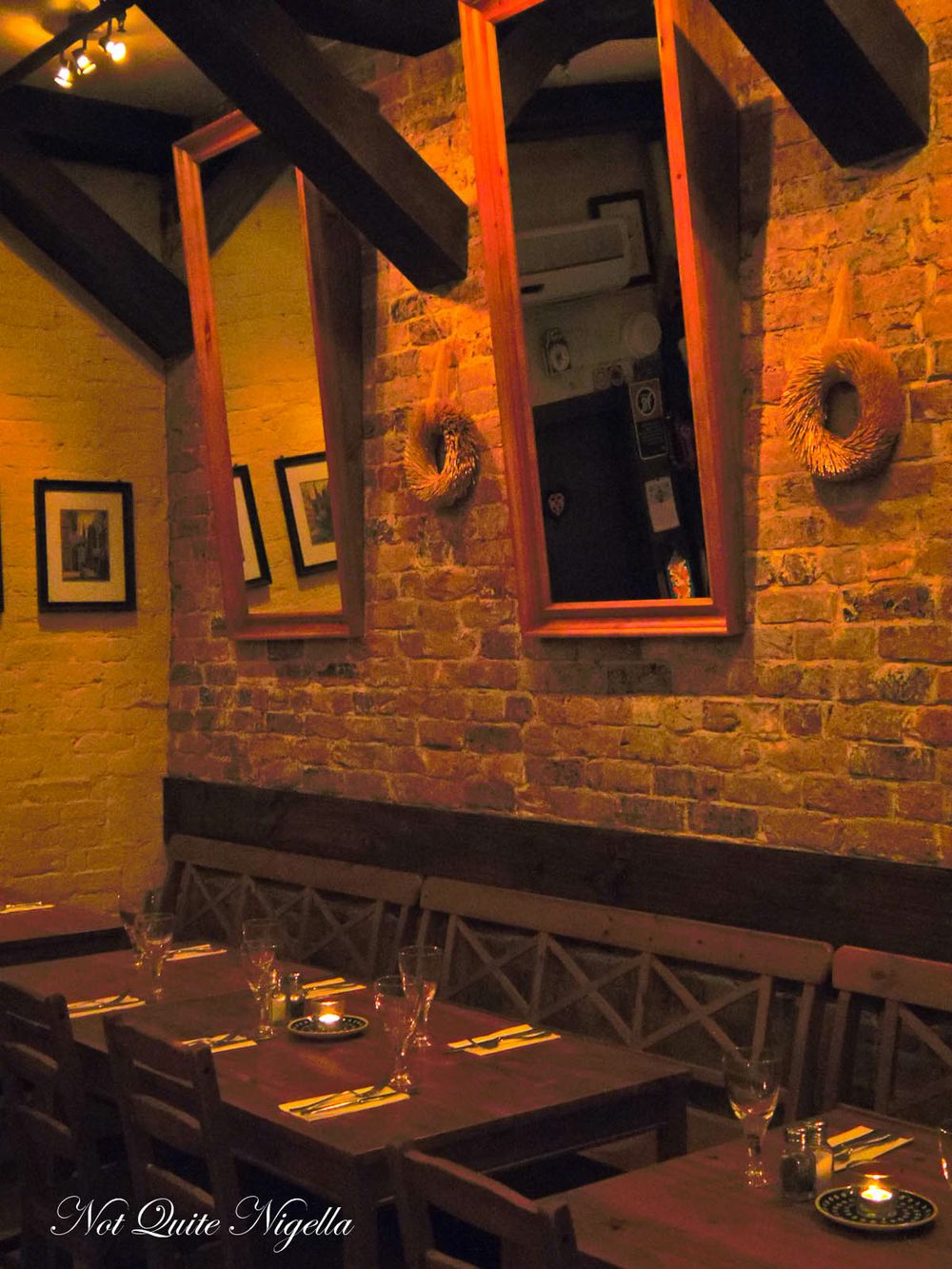 Our friendly waitress checks that it is still open (it's 8pm on Wednesday night) and indeed they are so we take a seat in this warmly decorated restaurant with traditional decorations (as well as modern touches like a soccer hoodie). The atmosphere is homely and comfortable. Na Zdrowie is the call made when toasting and the first page of the menu is a translation of a poem to good health by Polish Renaissance poet Jan Kochinowski. The menu is housed in plastic sheaths and pinned to a chopping board. Our waitress makes some suggestions and we decide to share two entrees and two mains. Maeve knows her way around a few items on the menu and suggests those while I keep my eye out for dessert which sounds delicious. 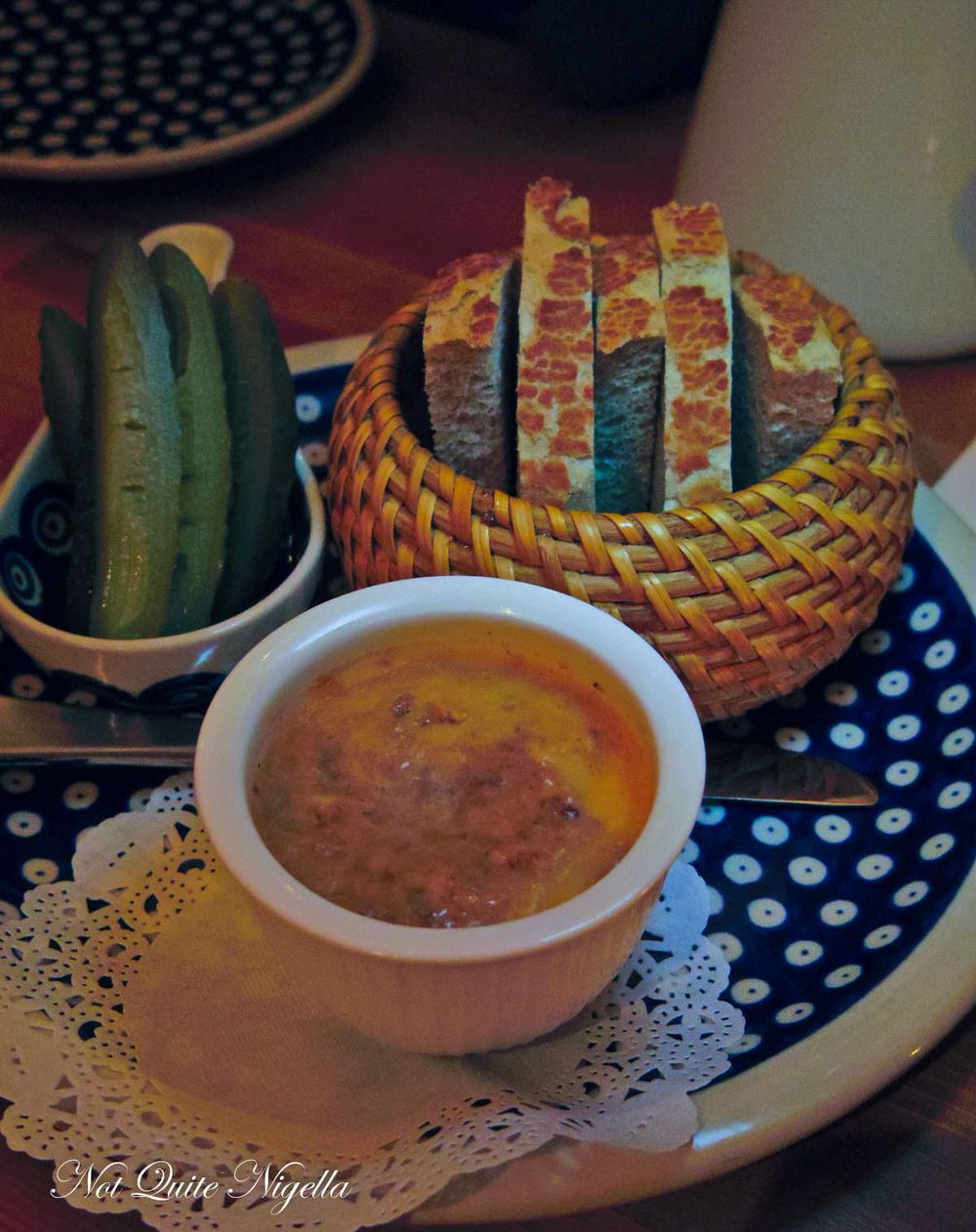 Smalec means lard in Polish and that will give you an indication that this isn't exactly diet food but it's absolutely delicious. Like a pork rillette it is served the traditional way on a wooden board and is filled with ground bacon, lard, apple and onions and served with soft, fresh slices of rye bread and Polish pickles. We ask for some more bread and I think I end up eating most of this! 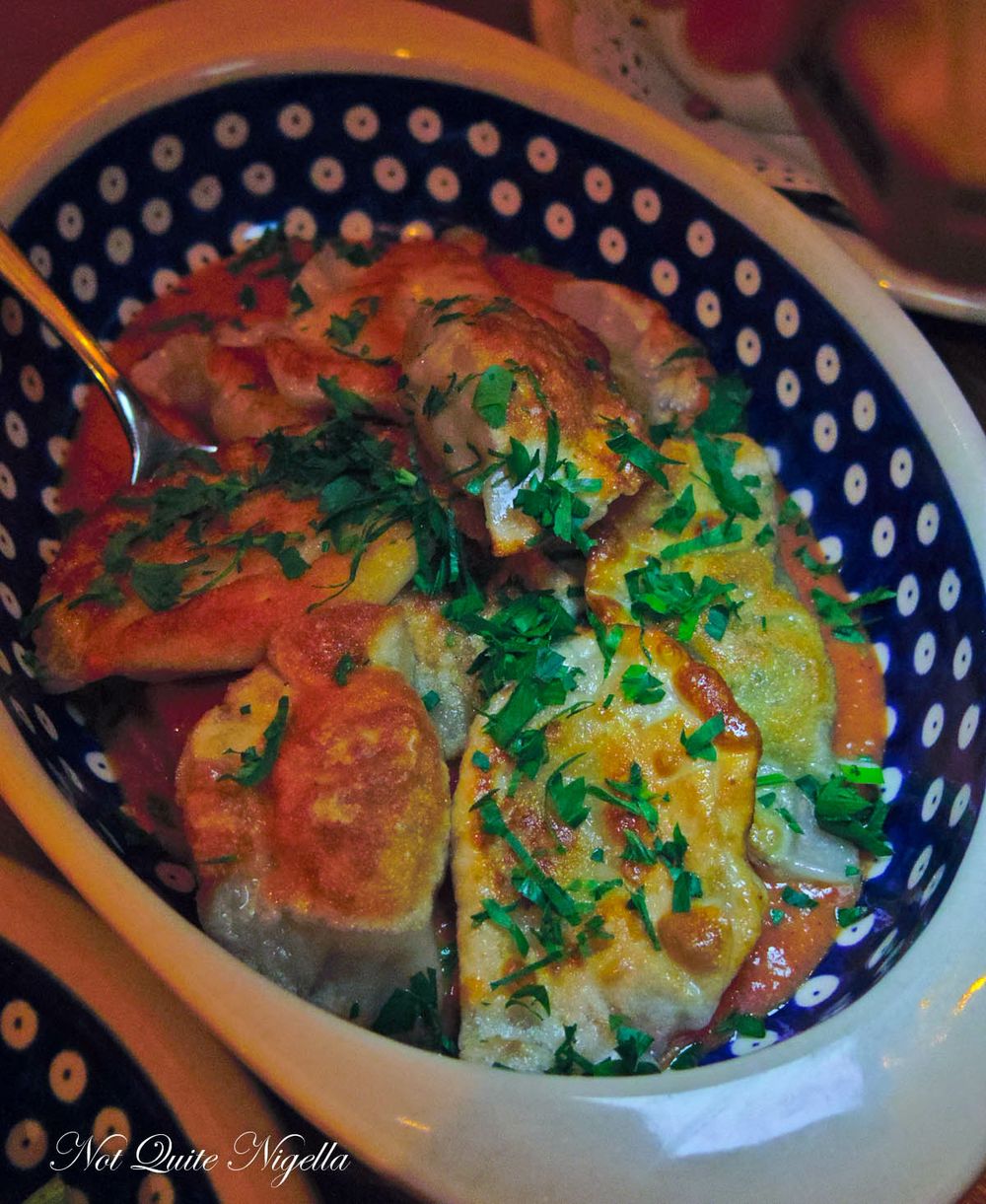 Pierogi assorted selection of nine with tomato and capsicum sauce $22.90

You could choose to have the pierogi boiled or pan fried, the latter being $1 extra and on the recommendation of the owner we went with the fried version. The three types of pierogi served were mushroom and sauerkraut with mushroom sauce, white cheese & potato with fried onion and sour cream and meat with stewed onion & bacon. They came out on a long spotted oval dish in a bed of tomato and roasted capsicum sauce. It's a lucky dip which pierogi you get which is part of the fun and they're firm, crispy little dumplings with a tasty golden edge to them from the frying and the sauce works very well with all of the pierogi. 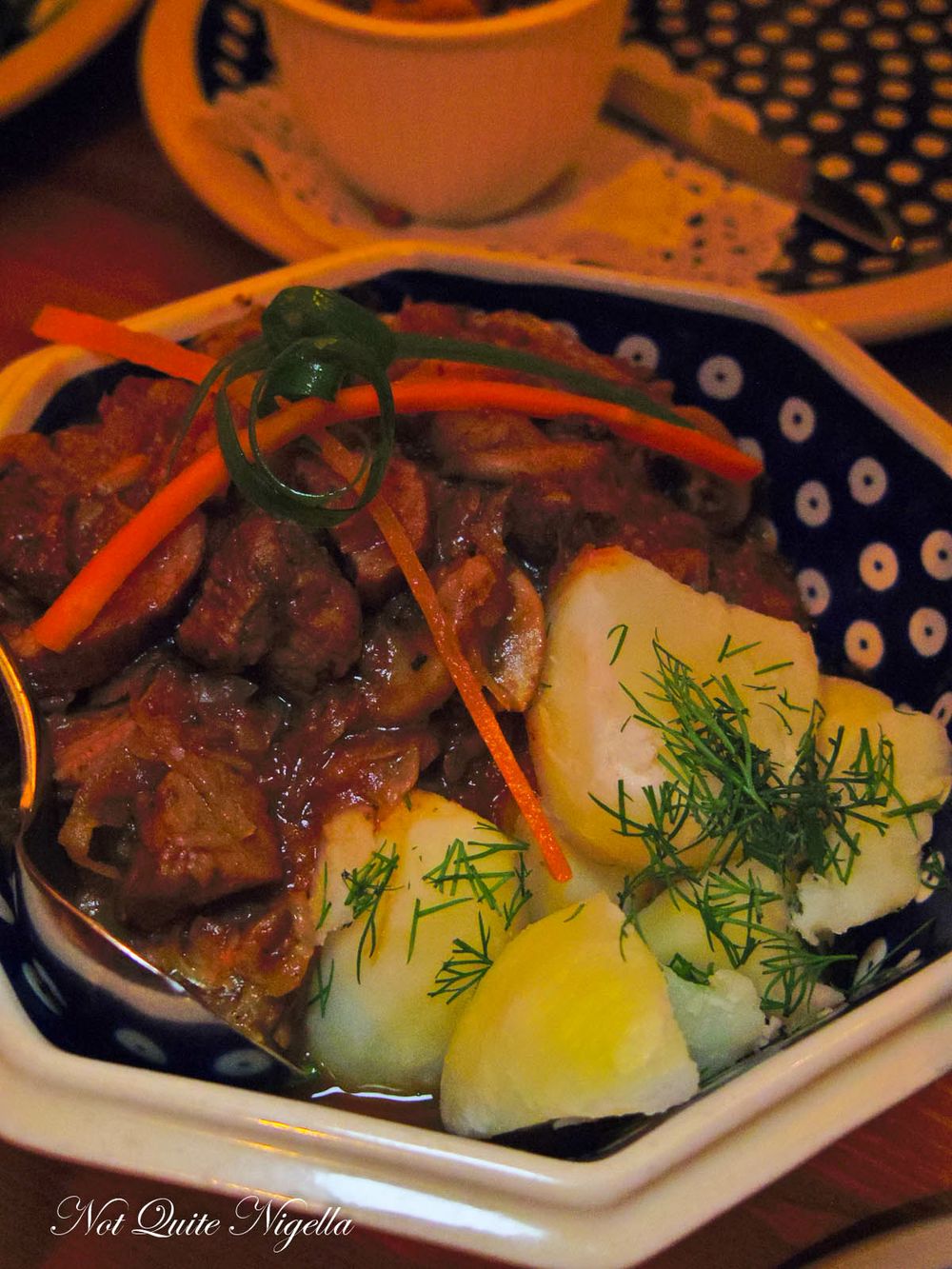 We decided on the Bigos (pronounced bee-gos) as it is the national Polish dish. It's a stew made up of smoked meat & hunters sauerkraut served with potatoes. Maeve describes it as a way to use leftover cooked meat and one in which they use both sauerkraut and fresh cabbage and cook them both down so that you get a hearty, meat laden stew with a variety of textures and flavours. 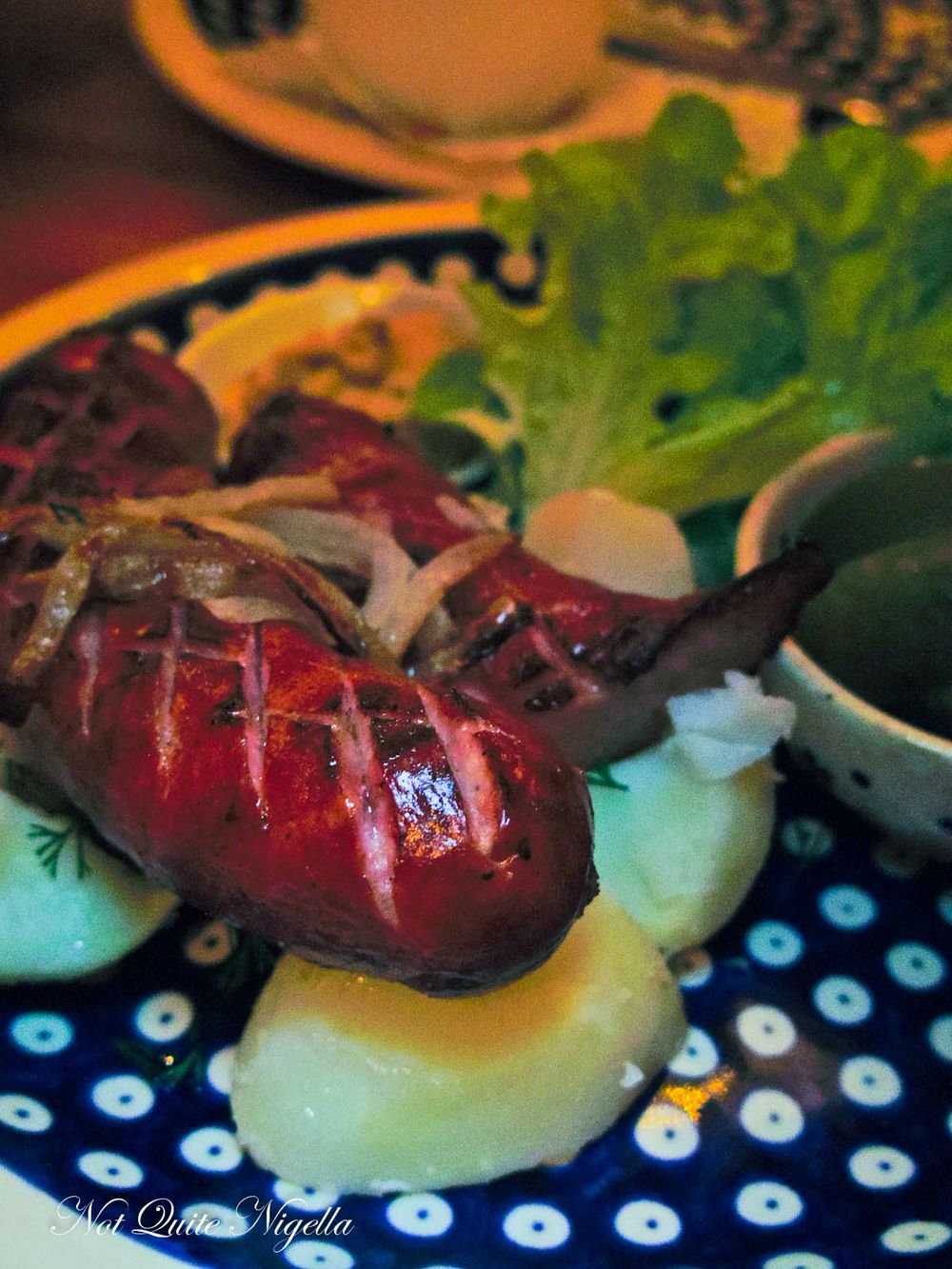 The Kielbasa or smoked Polish sausage is char grilled until fat, plumped up and juicy with one and a half sausages per serve. It comes with potatoes & pickles on the side. And even though between the four of us, we've shared two entrees and mains, the food is very filling indeed! 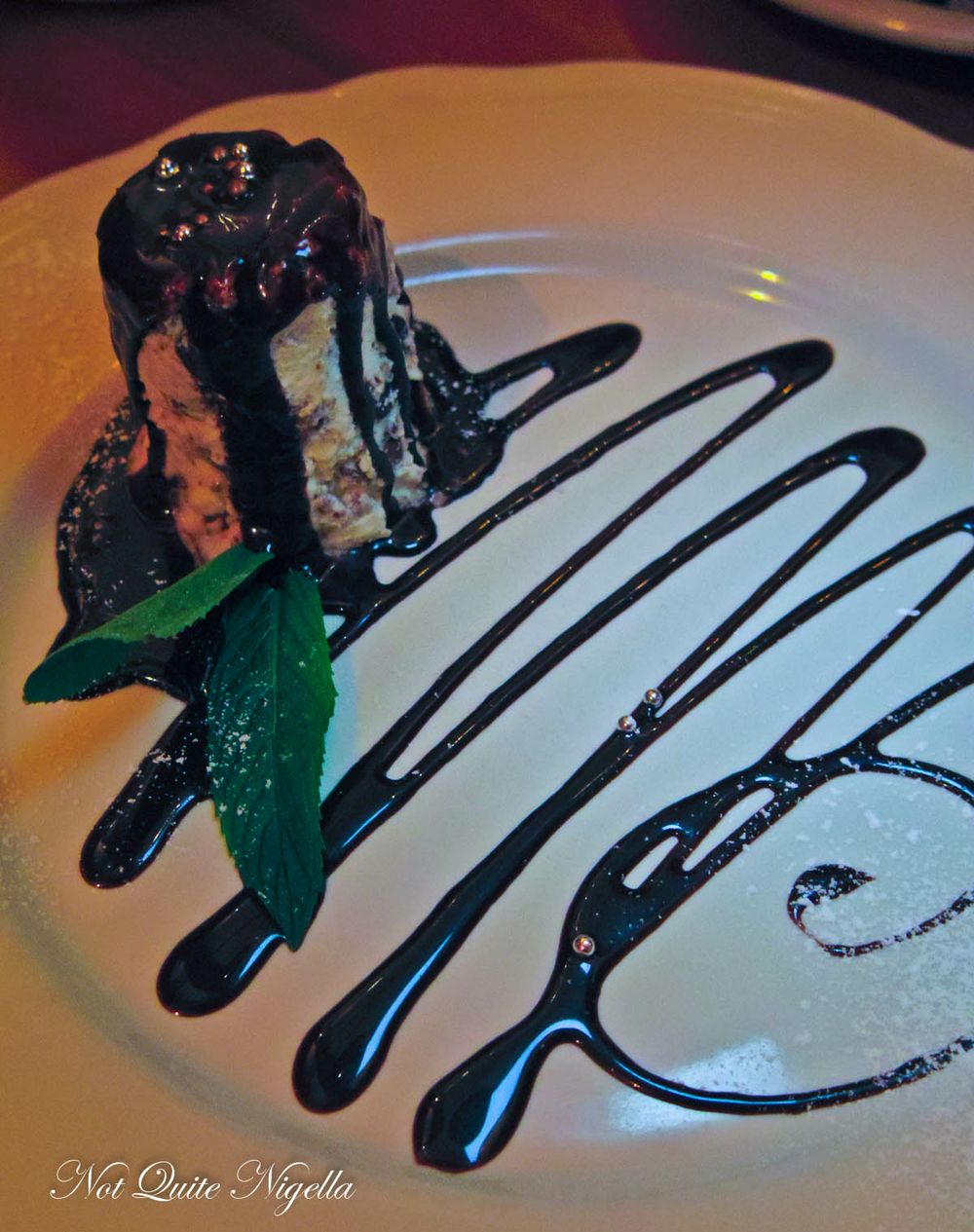 But of course you knew about the dessert stomach right? The area that will have four normally full gals picking up the long handled spoons we are given to "try" the desserts? The cheesecake, Maeve's choice was alas sold out the last slice going to another lucky recipient just minutes before so we decided on the Chopin Cake. Not a traditional Polish dessert, nor really cake in the traditional sense, it was an ice cream made with frozen whipped cream and chocolate and biscuit inside. 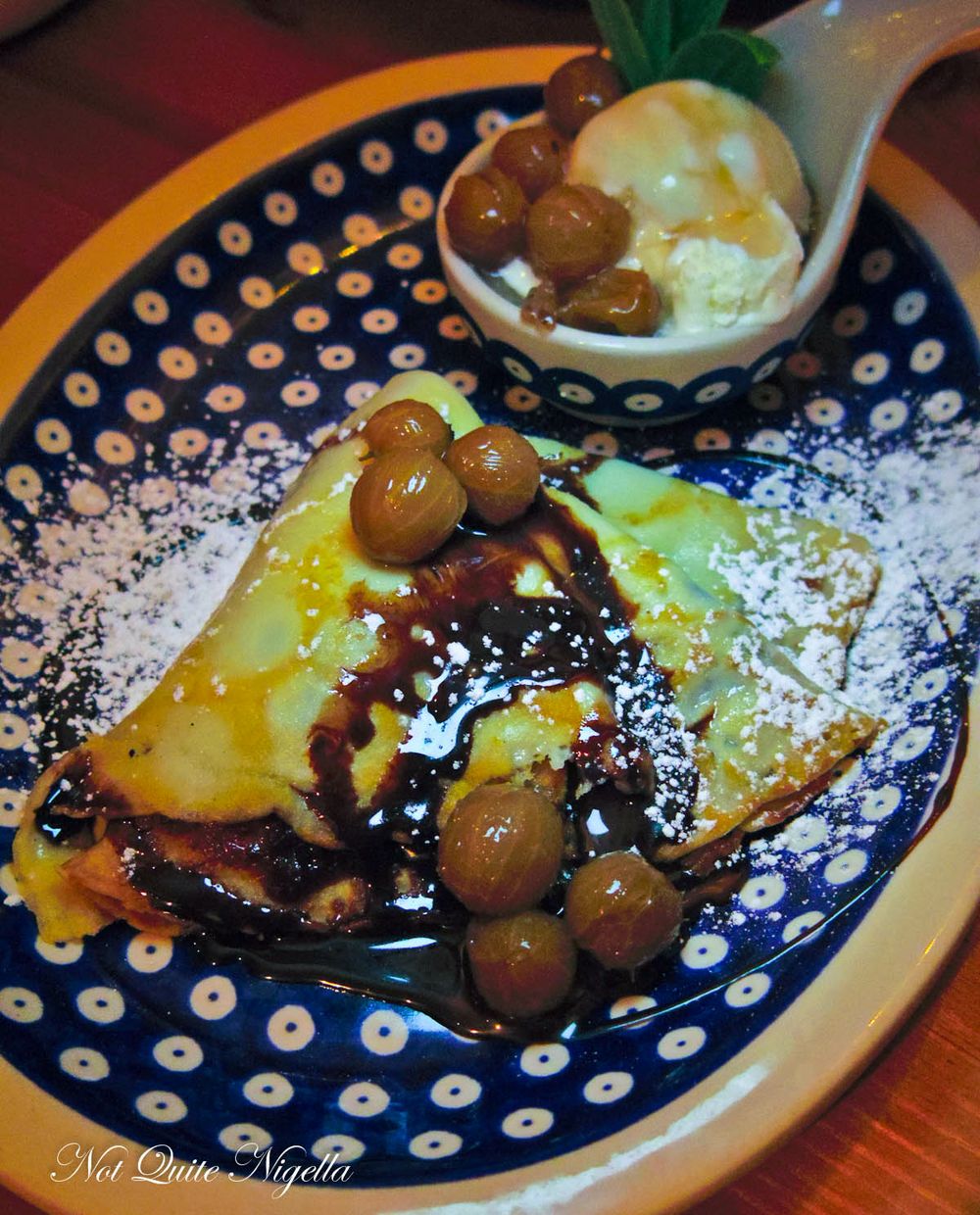 The crepe is a thin eggy crepe filled with plum jam and served with sweet stewed gooseberries and vanilla ice cream. It's the pick of the desserts and even though gooseberries are a bit tart when fresh, when they're cooked like this they take on an appealing sweetness and remind me of sweet, peeled grapes.

And I forgot completely about the parking ticket!

So tell me Dear Reader, do you ever get parking tickets or fines? 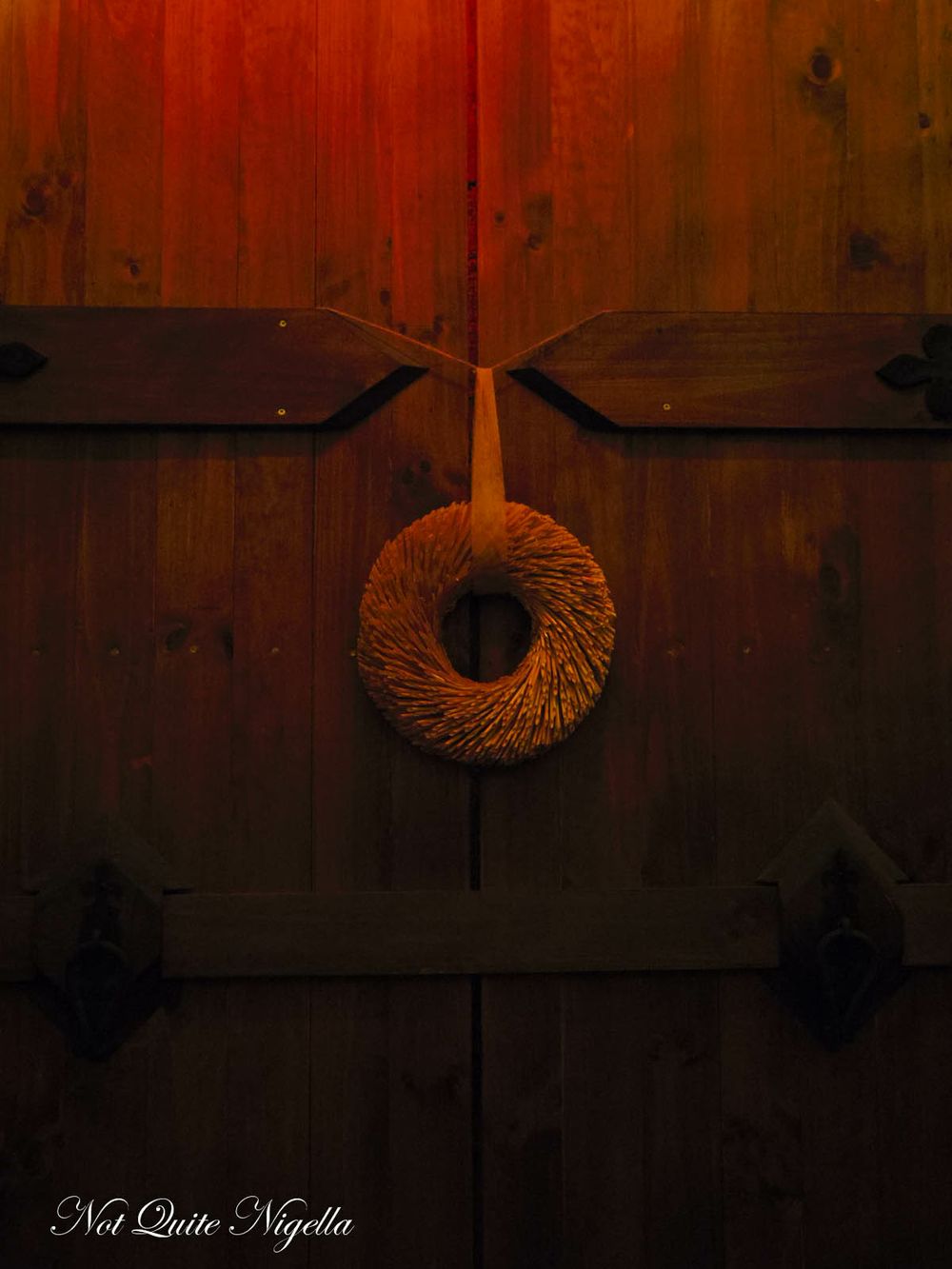 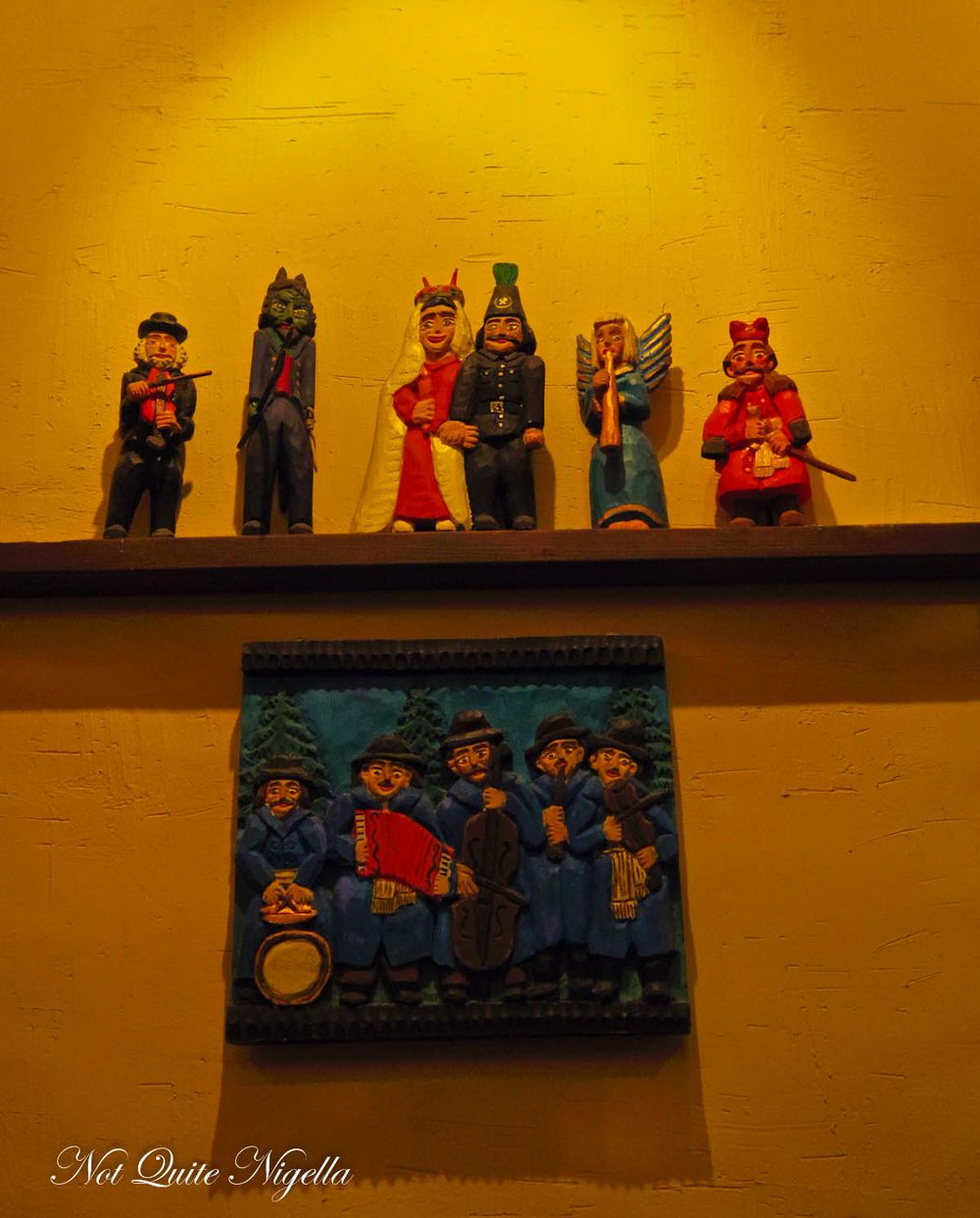